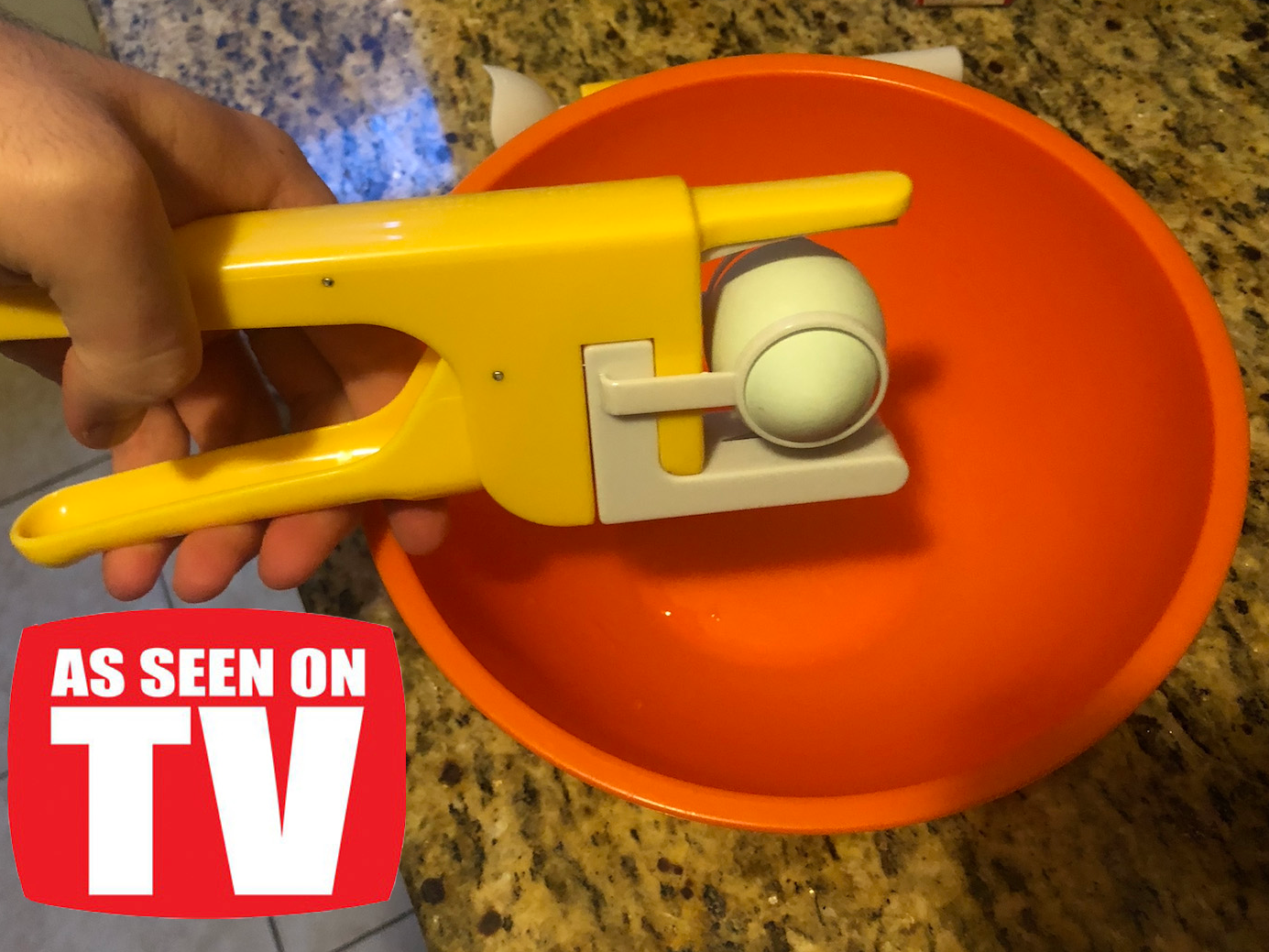 Frank Olito/ InsiderThe Clever Cracker is an ‘As Seen On TV’ product.

There are tons of kitchen gadgets on the market right now that are designed to make cooking easier. Most of us have seen these products advertised in often-hilarious infomercials under the branding “As Seen On TV.”

I’ve always been wary of these “As Seen On TV” kitchen gadgets and sometimes wonder who would buy a contraption to solve a problem many of us don’t have. Ignorantly, I’ve always considered these products to be useless.

To put my theory to the test, I decided to purchase six “As Seen On TV” kitchen products via Amazon, and the results shocked me.

Keep reading to see how this experiment proved my theory completely wrong.

The first product up to bat was the Gourmet Chopper 2000.

How it works: If you place an item, like a vegetable, in the container and crank the handle in a circular motion, the product is supposed to neatly chop the vegetable.

First impressions: When I first unboxed the product, I was sceptical. There seemed to be too many parts, and the container itself seemed comically large. From the onset, it seemed like a rather unnecessary product, especially because I have no issues chopping vegetables when I cook.

When I tested it, the Gourmet Chopper failed to cut, slice, or chop any item I placed inside.

caption
The potatoes are not chopped.

The results: I first put a large sweet potato in the chopper, and it did nothing. When I turned the handle, the sweet potato was just pushed around the container. I wondered if the potato was too big and hard to be chopped, so I tried a smaller, regular potato. That also did not work. In a last-ditch effort, I tried a small garlic clove, and that too just moved around the container without ever getting chopped. While this gadget might work better with other types of vegetables or fruit, such as peppers or tomatoes, the packaging says it cuts all types of vegetables, so I was disappointed with the result.

Would I use it again? No. When I tested it, the chopper did not do what it was advertised to do. I don’t really have any issues with cutting items in the kitchen anyway.

After my experience with the Gourmet Chopper, I didn’t have high hopes for the Perfect Fries cutter.

How it works: You place the potato on top of a grate and then put the cover on top and push down. Perfectly cut potatoes are supposed to come out of the bottom.

First impressions: The product seemed simple enough and reminded me of a cheese grater. I was a bit sceptical if it would work because potatoes can be quite hard, and I could foresee the grater breaking under the weight.

The Perfect Fry cutter did, in fact, cut the perfect fry.

The results: When I checked under the grate, I was surprised to find perfectly cut potatoes. I would recommend using a bigger potato for bigger fries, but the smaller potato was all I had on hand – and it still worked.

Would I use it again? Yes. I placed these small potatoes into the oven after cutting them and they created a delicious fry. It was easy to use, so I would definitely use it again in the future.

I also tried the “As Seen On TV” Master Blade.

How it works: This knife is used like any other knife in your kitchen, but it is advertised to be sharper than most, making it easier to cut the thinnest slices.

First impressions: When I first held the knife, the handle felt quite cheap to me. I’m used to metal or wood handles, but this one felt like it was made of plastic. This made me worry that the handle might break while cutting and I would end up hurting myself. I did, however, like that it came with its own blade guard so that you can store it safely.

Once again, the Master Blade worked as advertised.

The results: I wasn’t expecting too much because it seems like just a knife. But I was surprised to see how easily it cut into each vegetable and how thin I could get each slice. I tried a zucchini and a potato with this blade, and each slice was thinner than the last.

Would I use it again? Yes. This is a great alternative to the knives I currently have in my kitchen. It would be great to use when making chips because you can get the thinnest slices of potato.

Out of all the products I tested, I was most sceptical of the Clever Cracker.

How it works: If you place an egg lengthwise on the contraption and push the handle down like a stapler, the egg is supposed to crack. If done correctly, the yoke falls into the bowl, but the shell stays trapped in the Clever Cracker.

First impressions: Like the Chopper, I had my doubts about this product. When I took the item out of the box, it seemed more complicated than necessary. I had to figure out where to put the egg and how to make sure the egg wouldn’t slip out. I also did not see how the shell would just stay put. I figured there was no way this product would be successful.

I was shocked to learn that the Clever Cracker did exactly what it was supposed to do.

The results: The product was successful in cracking the egg. The yoke fell into the bowl, while the shell was trapped in the contraption. There were no small pieces of shell that escaped the clutches of the product.

Would I use it again? Although I don’t usually have an issue with cracking eggs, this contraption does eliminate the likelihood of getting shells in the bowl, so I would use it again in the future.

After the Clever Cracker, I switched gears to baking and tested the Perfect Brownie Pan Set.

How it works: First, you fill the pan with brownie batter and then place the divider in the tray so that the batter is separated into cubes. Next, you place the pan in the oven and the brownies are meant to bake evenly into perfect squares.

First impressions: I was most excited about this product because I love baking brownies on the weekend. I was excited to find a product that would make the brownie-making process easier and create perfect brownies. Not to mention, this was the most expensive item I bought, so I had high expectations.

The Perfect Brownie Pan Set was helpful in creating a perfectly sized treat.

The results: When the brownies were finished baking, I realised the product was extremely helpful in baking the perfect brownie. The pan created the optimal portion size and cooked each brownie evenly. The non-stick surface was fairly successful, allowing for each brownie to come up fairly easy. I would say, however, that it was difficult to clean each surface of the divider in the end.

Would I use it again? Yes. Despite the difficult clean-up, the perfectly shaped brownies reminded me of the treats I used to get at a school bake sale.

Finally, I gave the Tasty Top Cake Pops a go.

How it works: This silicone, non-stick tray is meant to create perfect, bite-sized cakes. First, you fill the tray without holes up to the brim with cake batter and then you put the tray with holes on top and lock them together. You place them into the oven and the cake bakes into the shape of the mould.

First impressions: Out of all the products I tried, this was the most straightforward in terms of assembly and unboxing. At first, I had some hesitations over whether the silicone material would be safe for the oven, but I was assured that the material was oven-safe.

The cake pops were formed perfectly in the “As Seen On TV” trays.

The results: After baking for 20 minutes, the cake pops came out of the oven. Once I separated the two trays, I was surprised to find six perfectly shaped cake pops inside. They even came out of the trays with surprising ease. The cake itself was delicious and would probably be even better with frosting.

Would I use it again? Yes. Although I don’t foresee myself making cake pops often, this is the perfect product for someone with children who needs to bake creative small treats.