Georgia is in play, and 2 Democratic candidates for Senate are banking on Georgia's changing demographics to give them an edge 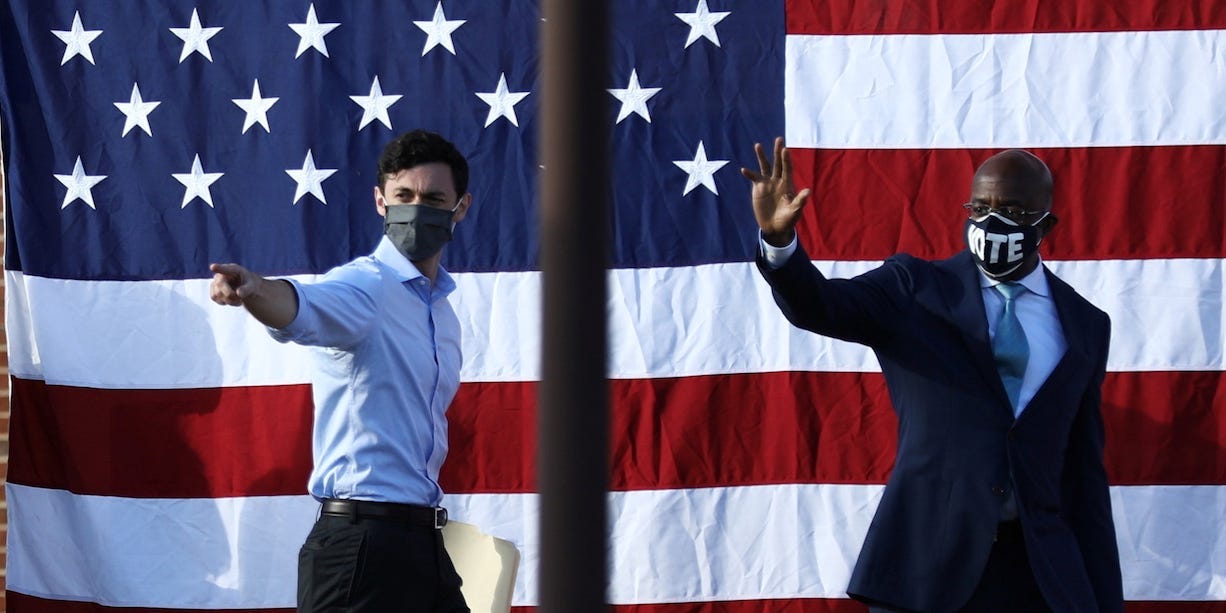 Rev. Raphael Warnock had a few minutes to talk before heading off to greet voters at the town square in suburban Marietta, Georgia, only steps from a museum located in a former 19th-century cotton warehouse.

Warnock has the potential to grab one of two Senate seats for the Democrats in Georgia. It’s the only state this year where both seats are in play, in a state that is seeing a demographic shift â€” an influx of immigrants and younger more diverse voters, as local NPR station WABE reported.

“Georgia is definitely changing,” Warnock said. “And everybody knows it … It’s a reversal of the Southern strategy, where race was used to divide. Now, we have diversity as a hope and promise of bringing us together for a new South.”

Warnock, who was named 15 years ago as the youngest senior pastor in the 135-year history of Atlanta’s Ebenezer Baptist Church â€” the same pulpit where Rev. Martin Luther King, Jr. preached â€” knows about bringing people together.

He also knows about the Southern strategy, a Republican appeal to white voters based initially on 1964 presidential candidate Barry Goldwater’s opposition to the Civil Rights Act â€” five years before Warnock was born.

Goldwater’s approach won him five states in the Deep South (including Georgia) â€” the only area of the country where it worked, apart from his home state of Arizona. While Democrats have been able to punch through in some races over the ensuing decades (like Jimmy Carter who was governor of Georgia and then won the South in his 1976 presidential race), the Republican party has continued refining their tactics throughout Warnock’s lifetime, adding “ideas about the role of government in the economy, women’s place in society, white evangelical Christianity, and white racial grievance,” Angie Maxwell, author of “The Long Southern Strategy,” wrote in The Washington Post last year.

This seems to be slowly changing. While there are stronghold areas of the state â€” swaths of both North and South Georgia â€” the GOP margin of victory is shrinking: President Donald Trump won Georgia by only around five points in 2016, and in 2018, Democratic candidate for governor Stacey Abrams lost by fewer than two points.

No bigger symbol that Georgia was in play was that Democratic presidential nominee Joe Biden held two events in the state on Tuesday, October 27, calling for unity and healing. The last time that the state’s electoral votes went to a Democrat was in 1992, but this year Biden is within striking distance of Trump.

“I’m running as a proud Democrat, but I will govern as an American president,” he said at an event in Meriwether County. “I work with Democrats and Republicans, I work as hard for those who don’t support me as for those who do. That’s the job of a president.”

‘Dog whistles, fear-mongering, all that old-school nonsense are now ineffective.’

Democratic candidate Jon Ossoff, who is running for the second Senate seat, echoed Warnock in a recent call in the middle of a week where he had been publicly decrying his opponent, incumbent Republican Sen. David Perdue, for mocking Sen. Kamala Harris’ first name while warming up a Trump rally in Macon.

Ossoff, who, like Warnock, is a Georgia native, also spoke to Business Insider of his “personal experience of this state’s evolution and progress over the course of my lifetime,” adding, “Dog whistles, fear-mongering, all that old-school nonsense are now ineffective.”

Warnock, if successful, would become only the 11th Black Senator in US history, and the first from Georgia. Ossoff is white and runs a company that produces documentaries using investigative journalism; if elected, he would become the first Jewish Senator elected in the Deep South since the 19th century.

Their races, though they are both courting Democrats in Georgia, look surprisingly different. Unlike Ossoff’s race where he’s challenging the incumbent, Perdue, Warnock is one of 21 candidates in a “jungle primary.” He’s running in a special election to fill the remaining two years in former Republican Sen. Johnny Isakson’s term, who retired last year due to health issues. His opponents include Republicans Sen. Kelly Loeffler, who Gov. Brian Kemp named to serve until Nov. 3, and Rep. Doug Collins. A candidate must obtain more than 50 per cent of the vote to win the seat; if not, the top two advance to a January run-off.

Warnock has led the pack in his race, recently polling just above 40 per cent; Ossoff is virtually tied with Perdue.

“In both cases, they probably wouldn’t have done so well 10, 20 years ago,” said Keri Leigh Merritt, a historian and author of “Masterless Men: Poor Whites and Slavery in the Antebellum South.” This is because of the growing number of Black, Hispanic, and Asian voters, as well as young voters, plus the influence of social media on fundraising for national races, Merritt said. The polling numbers to date and public enthusiasm for the candidates make her think the two may be on their way to “break[ing] the old white man conservative power hold” in Georgia.

Georgia’s changing electorate is perhaps nowhere more evident than in the ever-expanding Atlanta metro area â€” particularly in Gwinnett County, the state’s second largest, with nearly 1 million residents. In the 2018 midterms, Gwinnett became the first county in the state required by federal law to develop election materials in a language other than English, due to its Hispanic population of nearly 22%. There are also pockets of immigrant populations from Africa, Asia, and eastern European countries.

These populations “have a background in the free market, but also, a strong investment in social justice â€¦ they’re not responding well to the levers the GOP is pressing lately,” said Keith Gaddie, an academic and author of books on politics in the South, including “The Triumph of Voting Rights in the South.”

Those “levers” have included incidents such as Sen. Perdue’s mockery of “Kamala,” which not only resulted in Ossoff raising nearly $US2 million in donations, but also gave the candidate a chance to speak to Georgia’s changing electorate â€” organising an event with state legislators from immigrant backgrounds who spoke in personal terms about overcoming bigotry in Georgia and elsewhere in the South.

They have also included attacks against Ossoff â€” a Perdue Facebook ad posted in July made his nose look bigger (the campaign took down the ad and said it was an “unintentional error”), and the Republican’s campaign materials have highlighted the investigative journalist’s work for Al Jazeera media, a Qatari-owned company, saying this links Ossoff to terrorists. One such ad asks, “How can we trust him?” â€” a question that invokes a historical ingredient in the psychology of anti-Semitism.

Anti-Semitism has deep roots in the South, said Merritt, noting the Ku Klux Klan’s motivations during its early 20th-century resurgence. “They were driven as much by anti-Semitism and anti-Catholicism as by racism,” the historian said.

Rev. Warnock called these incidents “testament to the change in Georgia, ironically â€” they’re the backlash of a dragon that is dying.” 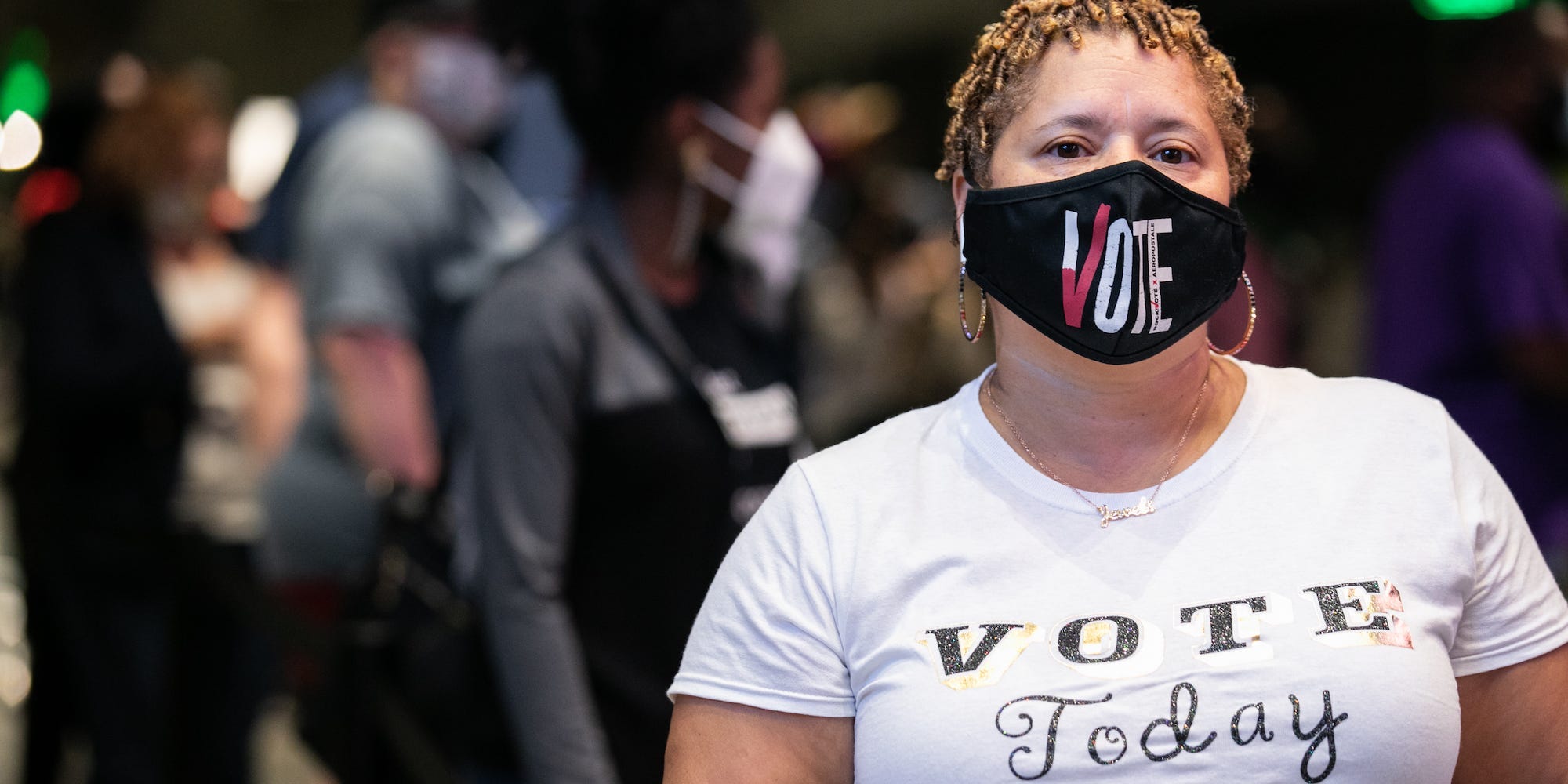 Jessica McGowan/Getty ImagesHeather King waits in line at State Farm Arena, Georgia’s largest early voting location, to cast her ballot during the first day of early voting in the general election on October 12, 2020 in Atlanta, Georgia.

Getting out the vote

At the same time, changing demographics and attitudes through swaths of Georgia mean nothing if people aren’t registered and don’t vote, said Robin Morris, a history professor at Agnes Scott College.

Another recent change that may favour either, or both, of these candidates has been intensive voter registration and get-out-the-vote efforts in recent years â€” best exemplified by Abrams, who narrowly missed becoming the nation’s first Black woman governor in 2018, but also carried out by state lawmakers like Bee Nguyen, who has reached Asian-American voters with such efforts.

“We need to look back to local politics of at least 2016 â€¦ and how they strategised to turn a more diverse population into more diverse voters. Abrams escalated those efforts in 2018 and her Fair Fight campaign, growing out of her 2018 loss, is critical to understand 2020,” Morris said.

In his first TV ad, launched in August, Rev. Warnock stands in the Kayton Homes housing project where he grew up in Savannah and says, “I realise that a kid growing up here today, and struggling families all across Georgia, have it harder now than I did back then.” Asked about this recently, he said, “People across racial lines are having a hard time. I’m also talking about white kids, in rural, disaffected communities. When I say, ‘kids like me,’ I don’t mean racially â€” I mean there’s an increasing division between the haves and have nots.”

“Whites in this state are hurting, too,” said Merritt, noting that rural parts of the state are suffering economically, with ongoing challenges to the agricultural economy and Georgia still being one of a dozen states that have not expanded Medicaid. “And those are the areas that are most racist â€” the ones with white suicides, white poverty, white opioid addiction, no rural hospitals, and no jobs.”

The legacy of Rep. John Lewis

Older voters in particular are likely aware of one way the two candidates evoke several political touchpoints in Georgia and the Deep South generally â€” including the “long history â€¦ of African-American candidates coming out of the church,” Gaddie said. “You don’t have Georgia politics without Ebenezer Baptist Church and the Southern Christian Leadership Conference.” Also, there’s a “long history of ties between Jewish and African-American communities,” particularly during the Civil Rights movement, he said.

As Georgians consider the two in the coming days, Ossoff brought this to mind. He recalled when he was only a high school student, and interned with Rep. John Lewis. “I remember my first lunch â€¦ he wanted to talk to me about how he had marched side by side with Jewish religious leaders,” he said. “Here we are in 2020, and Georgia is poised to elect a young, Jewish man and the senior pastor at Ebenezer Baptist Church, both of whom were mentored by John Lewis. There could be no better illustration of the changes Georgia has gone through.”