A Family Dollar security guard was killed after he refused to let a customer into the store because they weren't wearing a mask. Experts say acts of aggression are a terrifying trend on the rise in the retail sector. 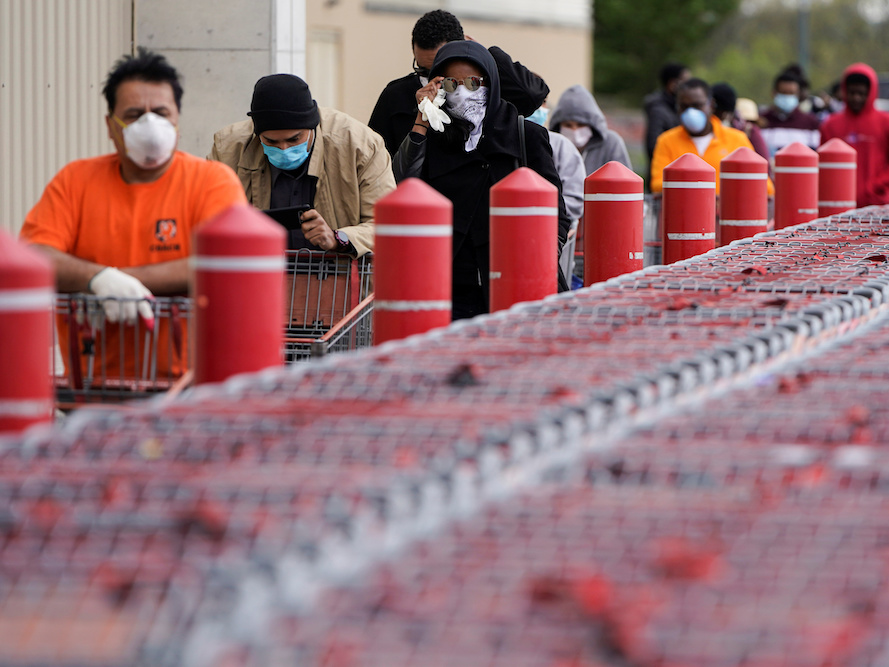 REUTERS/Joshua RobertsShoppers wear masks as they wait to enter a Costco store during the outbreak of coronavirus in Washington state.

A Family Dollar security guard at one of its Michigan stores was shot in the head and killed last week after he stopped a customer from entering the store because her daughter wasn’t wearing a protective mask.

According to a statement from the police, 43-year-old security guard Calvin Munerlyn got into an argument with the shopper after he told her that daughter needed to wear a mask to shop at the store, as per state-mandated orders. The woman’s husband and son allegedly came back to the store later on and shot the security guard in the back of the head.

“From all indications, Mr. Munerlyn was simply doing his job in upholding the Governor’s Executive Order related to the COVID-19 pandemic for the safety of store employees and customers,” Genesee County Prosecutor David Leyton said in the statement.

While this an extreme example, experts say it is representative of concerning trend of customers becoming more aggressive to retail workers or security guards at stores in the US over new rules and restrictions put in place during the pandemic.

Retail workers today find themselves not only having to worry about their own health and potentially catching the virus at work but also dealing with pools of increasingly hostile shoppers that they are having to police. Experts say this situation will only get worse as more stores across the country start to reopen and customers return to a new set of shopping rules.

“In 30 plus years of studying retail and crisis situations, we have never seen a situation of customers being so rude to hourly employees,” Larry Barton, a professor of crisis management and public safety at the University of Central Florida, wrote in an email to Business Insider.

A Whole Foods store worker, who wished to remain anonymous through fear of retribution, recently told Business Insider’s Hayley Peterson that they were being shouted at by customers on a daily basis.

As the lockdown continues, other customers seem to be growing increasingly frustrating about new social distancing measures and lining up outside stores. Over the weekend, police were called to a Costco store in New Rochelle, New York, after a crowd of shoppers lined up outside the store turned aggressive and started chanting when they were kept outside as the store opened 30 minutes later than expected.

“I thought I was going to get trampled,” one customer, called Jose who was in the line outside at the time, told The New York Post. Jose did not provide his full name. “It got dangerous for a while,” he said.

There have also been cases of customers becoming aggressive over restrictions on what items they can buy in stores. In April, for example, a woman attacked a Walmart cashier with Lysol disinfectant spray after she was told that there was a limit on the number of Lysol products she could buy.

Many retail workers are finding that their responsibilities have changed overnight and are required to make sure customers are abiding by the new rules, and most aren’t compensated for this. “We signed up to be cashiers but now we have to police the people,” the Whole Foods worker said.

Barton said that workers are also receiving little or no guidance from management on how to handle a volatile person.

“Retailers must train employees on de-escalating hostile persons now – before the need,” he said.

“I am very concerned that this summer, as temperatures rise, we will see a noteworthy increase in short tempers moving from verbal to physical. The time to prepare is now before a critical incident occurs,” he added.