Workers at essential businesses like Staples, Costco, and Wendy's say they're insulted by 'pathetic' rewards of pizza, free lunches, and candy, as they beg for sick leave and hazard pay during the pandemic AP Photo/Wong Maye-ESome essential workers say they are insulted by ‘pathetic’ rewards from bosses as they continue to work during the coronavirus pandemic.

The coronavirus outbreak isn’t stopping some employees of essential businesses from coming into work.

But while companies like Target, Walmart, and Starbucks have changed their employees benefits amid the coronavirus outbreak to include additional paid time off, some workers are being offered more atypical tokens of appreciation, like free pizza, lunches, and candy.

For some employees, these gifts are more infuriating than helpful.

Last week, Nelson Santiago and his coworkers at a Wendy’s in Waco, Texas, crowded around a window to pose for a picture.

Santiago had been encouraging coworkers to try to social distance, despite the cramped conditions in the small kitchen. But, a corporate employee from the Wendy’s franchisee, Muy Hamburgers, had instructed the workers to gather for a photo, so Santiago squeezed in with his fellow employees. The corporate employee snapped a photo and left a light blue gift bag on the window sill before driving away, all while staying far away from the Wendy’s employees. Someone had written on the outside of the bag: “We appreciate all you do!” Inside the bag was a handful of mini-candy bars.

Santiago said he felt “disrespected and humiliated” by the candy, especially when considering his pay of $US8.50 an hour, lack of hazard pay, and his concerns that he could get sick if he continued to go to work. He quit Wendy’s over the weekend, after getting pushback from his manager over his reaction to the “gift” and due to fears that he could catch the coronavirus.

Neither Wendy’s nor Muy Hamburgers responded to Business Insider’s request for comment.

While Wendy’s recently announced it would give employees at company-owned stores a 10% pay bump and roll out a new emergency paid sick leave policy, the changes will only impact workers at roughly 6% of the chain’s more than 6,000 locations in the US. Workers’ pay and benefits at the more than 5,800 stores owned by franchisees are up to the location’s independent owners.

“For them to say a simple thank you while they sit in the comfort of their homes with their families protected and reaping the benefits of these chains still being open – it is insulting,” Santiago said.

Santiago is far from the only worker to question why employers are slow to offer meaningful benefits but quick to say they are thankful of employees.

“It’s a slap in the face,” said a Staples manager in a store in California, who brought in free lunch for his employees during this time, albeit to some appreciation.

This manager, who asked to remain anonymous, said his store is allotted $US50 a week in store funds to buy food for workers. While nice in theory, the manager said this gesture is not nearly as valuable as hazard pay or monetary compensation.

Staples has not introduced additional paid leave for its employees during the outbreak, though some stores are receiving a weekly $US50 credit for refreshments or food for all employees.

Three employees in Staples stores in Michigan, Maryland, and North Carolina also told Business Insider their stores were offering free lunches for employees. Workers who spoke with Business Insider for this piece were kept anonymous in order to allow them to speak frankly about the situation. Their employment status was confirmed through pay stubs or other documentation.

A Staples employee in a Lincoln, Nebraska, store said that the $US50-a-week gift doesn’t go that far in terms of team morale.

“We are scared going to work and feel sacrificial,” this employee said of her job, describing how opting for unpaid leave is not an ideal option for someone in her situation, who depends on a paycheck to eat. “We are also not getting hazard pay or any other compensation for putting ourselves at risk.” 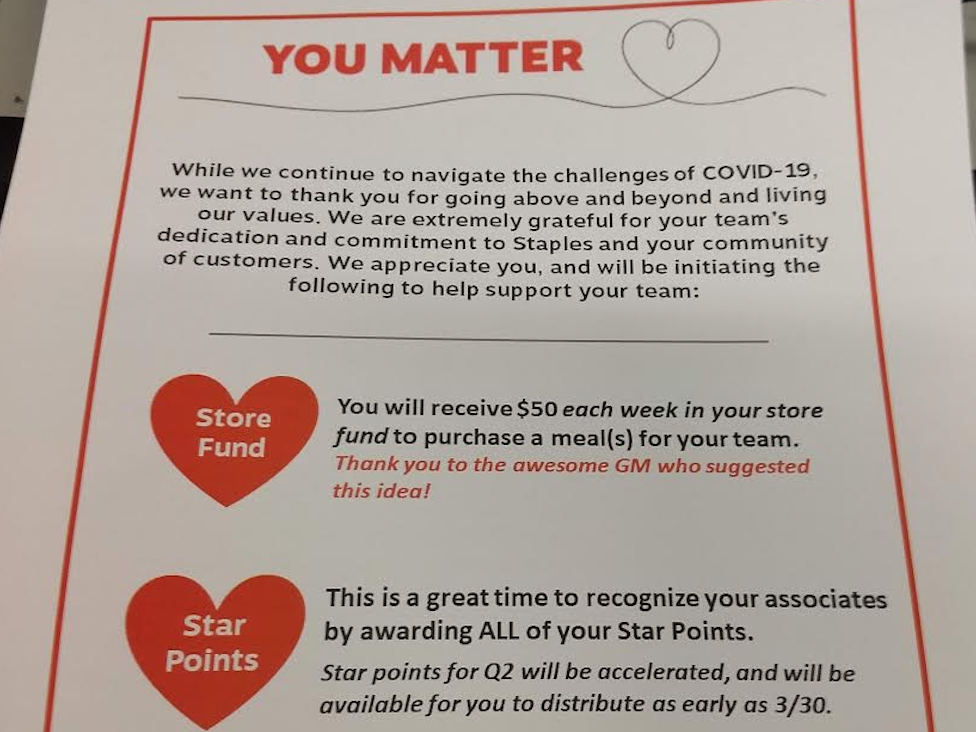 Staples is offering extra Star Points, which can be traded in for prizes

Staples is also offering a different incentive in some stores via its Star Point system, the company’s internal currency that employees can accumulate to trade for certain rewards such as personal care items and gift cards. Two Staples employees from Texas and Maryland stores told Business Insider that employees had the chance to earn extra Star Points during this time.

“These measures are pathetic,” the Maryland Staples employee said. This employee said that hazard pay or monetary bonuses would be more useful in her situation

At Office Depot stores, employees reported receiving free lunches as well, though it was not clear whether managers were being given extra funds for these purchases.

A Nebraska Office Depot employee whose managers bring in pizza for the store regularly said this gesture does not make up for the “immense risk” he feels coming into work during the pandemic.

Staples and Office Depot employees have started campaigns on Coworker.org to urge both chains to close their stores while paying workers. Each campaign takes issue with the claim that these stores are essential and says that staying open poses a danger to employees.

“The most they have done is give us pizza,” a South Carolina Office Depot employee said.

Some Costco workers have been given snacks and meals at work 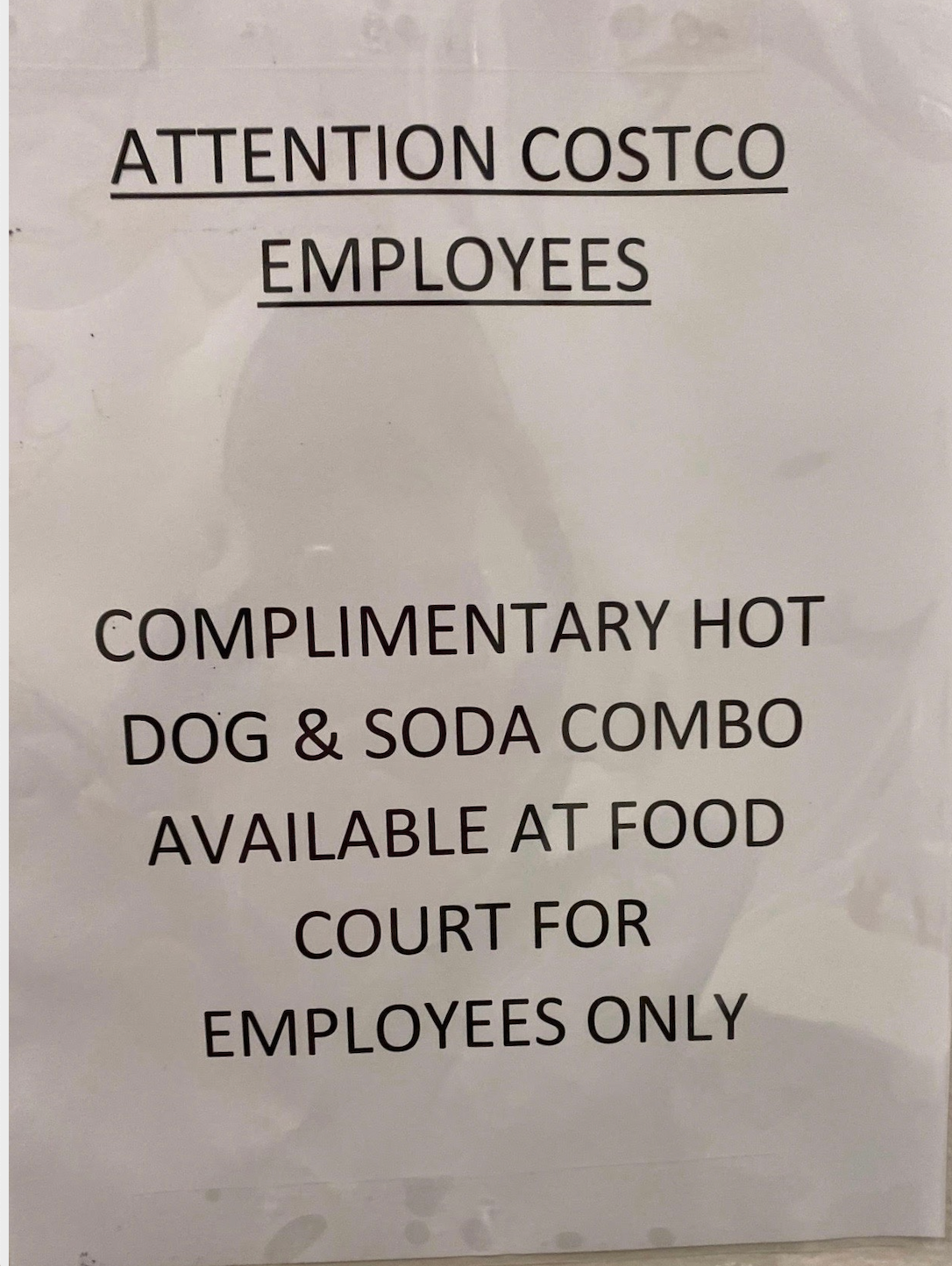 Courtesy of an Illinois Costco employeeCostco is giving employees who work during the pandemic free lunch.

At Costco, some employees reported receiving free snacks and lunches at work.

Costco has not announced any additional paid sick time for a majority of its employees, though the warehouse store is currently paying workers an extra $US2 an hour for their work during the coronavirus outbreak. Costco also recently offered two weeks of paid leave to at least some employees who are over 65 years old.

Two Costco employees in Illinois and the Northeast have reported being offered free meals and snacks. In addition to a complimentary hot dog and soda combo, the Illinois employee said that workers in his store were treated to snacks and drinks in the break room at all times throughout the day.

The Northeast Costco employee said his manager regularly brings in fast-food meals for employees in the store, which this employee appreciated.

Staples, Office Depot, and Costco did not respond to Business Insider’s requests for comment.

Fast-food chains have announced new benefits for workers amid the coronavirus outbreak. Perks include manager bonuses and a medical relief fund at KFC, Taco Bell, and Pizza Hut and paid sick leave at McDonald’s. Starbucks is paying all workers whether or not they come to work, giving those who do an extra $US3 per hour.

However, most employees’ pay and benefits are controlled by independent franchisees, meaning that even if well-known brands like McDonald’s and Wendy’s roll out new benefits, not all workers will necessarily receive the perks. While many major chains already had or recently announced new sick leave policies, some franchisees did not do the same until they were forced to do so by the Families First Coronavirus Response Act, which requires employers with 50 to 500 workers to provide paid sick leave.

If fast-food workers are getting bonuses or perks, some say they are forced to compete for them. A Taco Bell manager said that while some of the best performing stores could earn rewards, his franchisee pitted different locations against each other so that only a few could benefit.

“Not one is paying their staff more or rewarding them for simply ‘working’ or putting their lives on the line,” he said.

Taco Bell did not return Business Insider’s request for comment.

Instead, many fast-food workers say they are earning less than ever, as franchisees try to cut costs in response to plummeting sales. In one case, Burger King’s biggest franchisee, Carrols Restaurant Group, cut all employees’ pay by 10%, later reversing the decision following backlash.

Less drastic but more common than outright pay cuts is employees having their hours cut, something that many of the more than 30 workers who spoke with Business Insider in recent weeks mentioned as a concern.

The Taco Bell manager said he has been working 65 hours a week without extra pay to make up for employees who have resigned after having their hours cut. A Dunkin’ manager said he was facing a similar situation, in part because some workers at his location were too scared to go to work.

One McDonald’s worker said she was laid off two weeks ago, after having her hours reduced. She told Business Insider she has applied for unemployment and is planning to apply for welfare, but she is concerned that she will not receive money in time to pay her bills.