Plexiglass barriers are popping up in restaurants around the world, and they could become the new normal when eating out 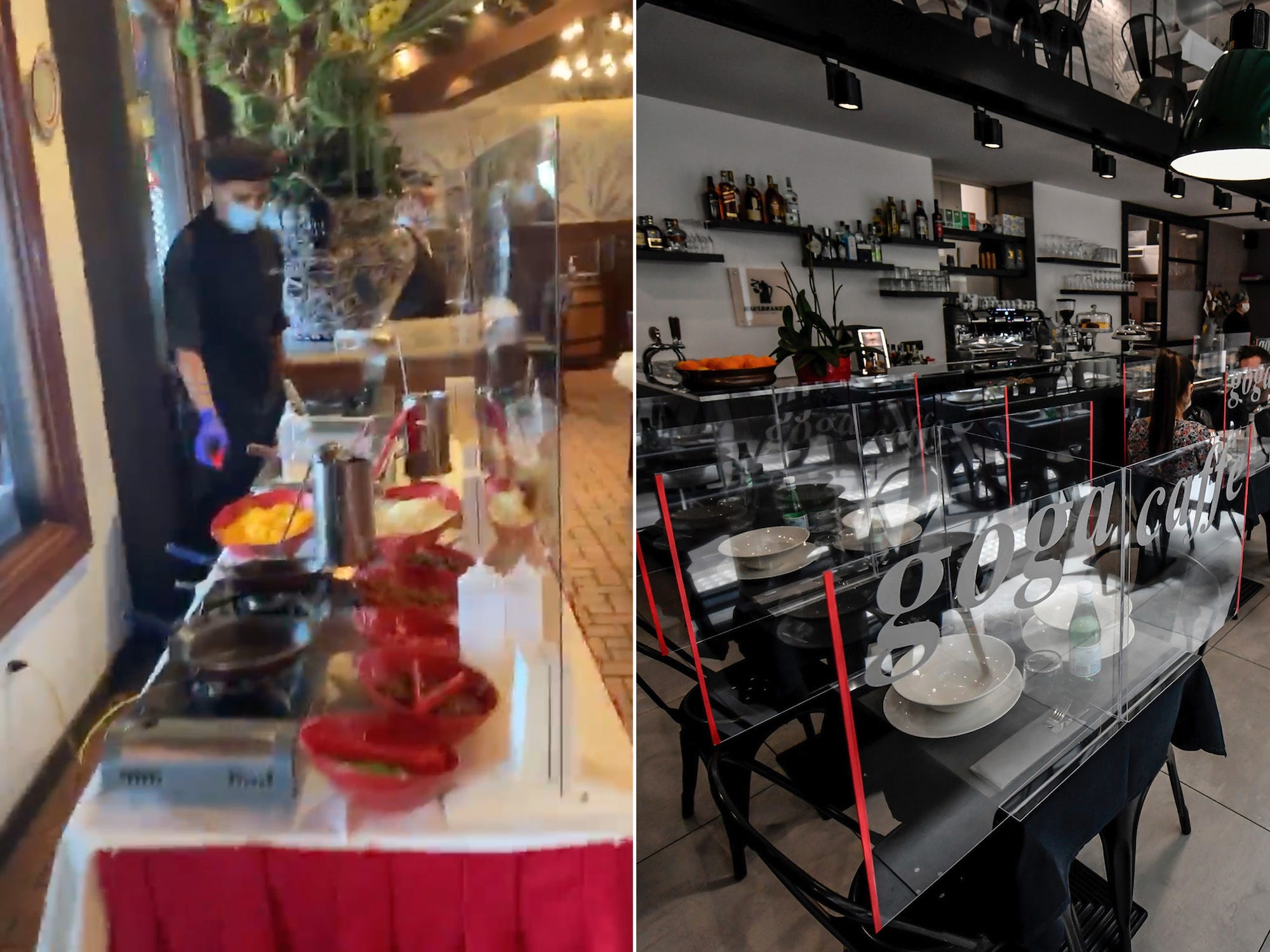 With the rules of Italy’s nationwide lockdown beginning to relax, restaurants across the country are gearing up for the possible reopening of their dining rooms on June 1, and trying to figure out how they will keep their customers and employees safe.

Some restaurants are testing plexiglass barriers on and around tables designed to help patrons keep their distance from others. 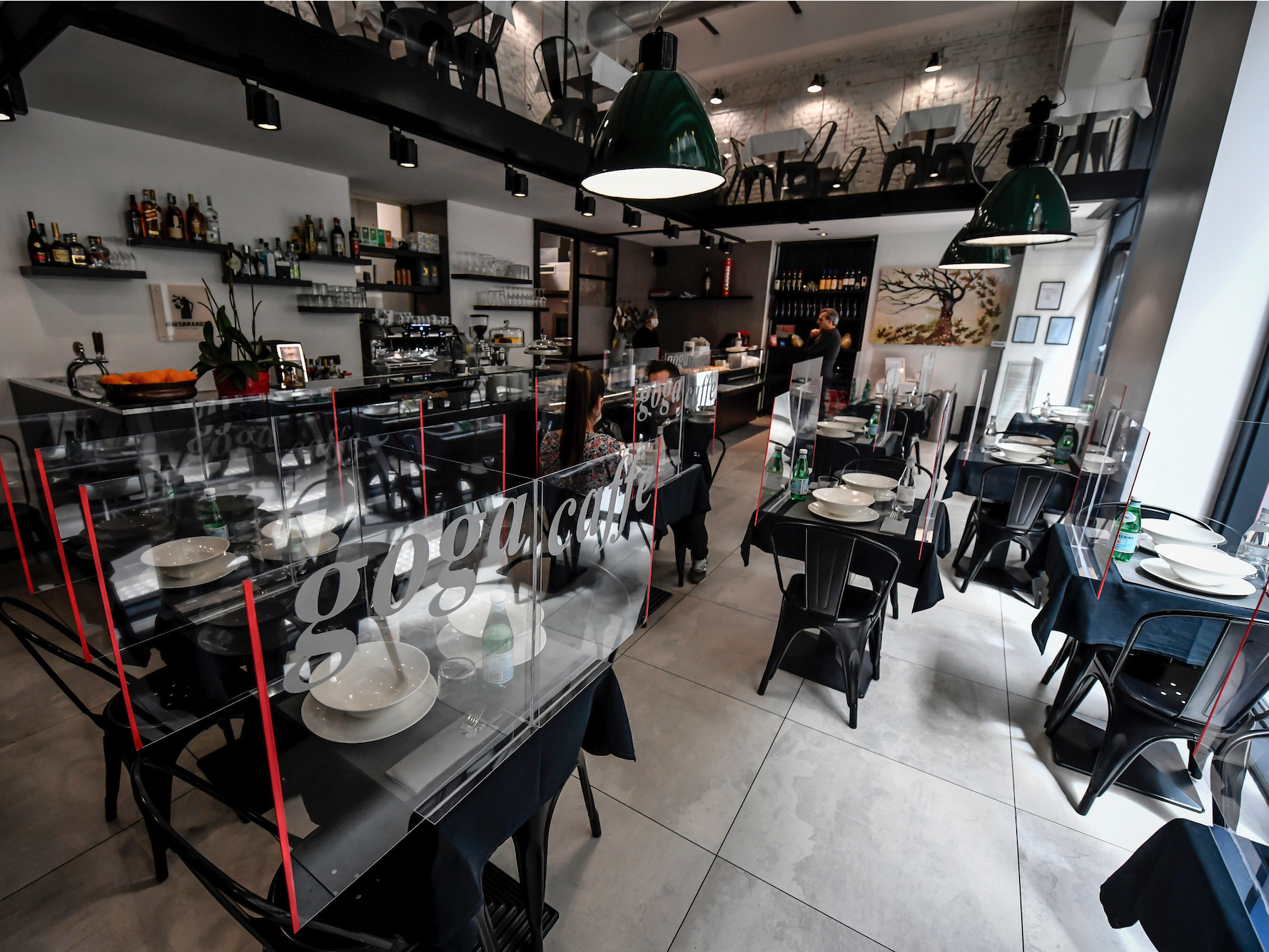 Claudio Furlan/LaPresse via APA demonstration of how plexiglass barriers would be set up at Goga Café in Milan.

Dario and Neri Goga, owners of Goga Café pictured above, hosted a demonstration for media on how they plan to construct barriers in their Milan restaurant.

Visible from the photo, plexiglass runs along and extends past the edges of the long side of each table. Some tables also appear to have sheets of the glass cutting between the two diners sharing the table.

Brothers Andrea and Valerio Calderoni, owners of Ristorante Il Ciak in Rome, showed their take on the safety measures by installing one sheet of plexiglass between two diners and another in the aisle. (Ristorante Il Ciak is currently open for takeout.) Andrew Medichini/AP PhotoRistorante Il Ciak in Rome explored the best way to set these up in their dining room.

Yardbird, one of the most popular Hong Kong eateries among people in the food industry, is implementing barriers between its booths. Restaurant designer Sean Dix shared photos of the panels in Yardbird’s dining room, now open for business, on Twitter.

yardbird in hong kong – we just designed these retrofitted (hopefully temporary) panels for their booths: pic.twitter.com/rVSUGXgnk1

Another Twitter user shared photos of a Starbucks coffee shop in Taipei that had barriers set up on a long, communal table.

In the US, one Texas restaurant owner says plexiglass barriers have gone over well with customers so far

As of May 1, restaurants in Texas are allowed to reopen at 25% capacity with tables set six feet apart from one another.

Arnaldo Richards, executive chef and owner of Arnaldo Richards’ Picos Restaurant in Houston, installed plexiglass barriers along the bar inside his Mexican restaurant.

“Our customers feel comfortable being in this, basically what I would call a plexiglass cubicle,” Richards told Insider. 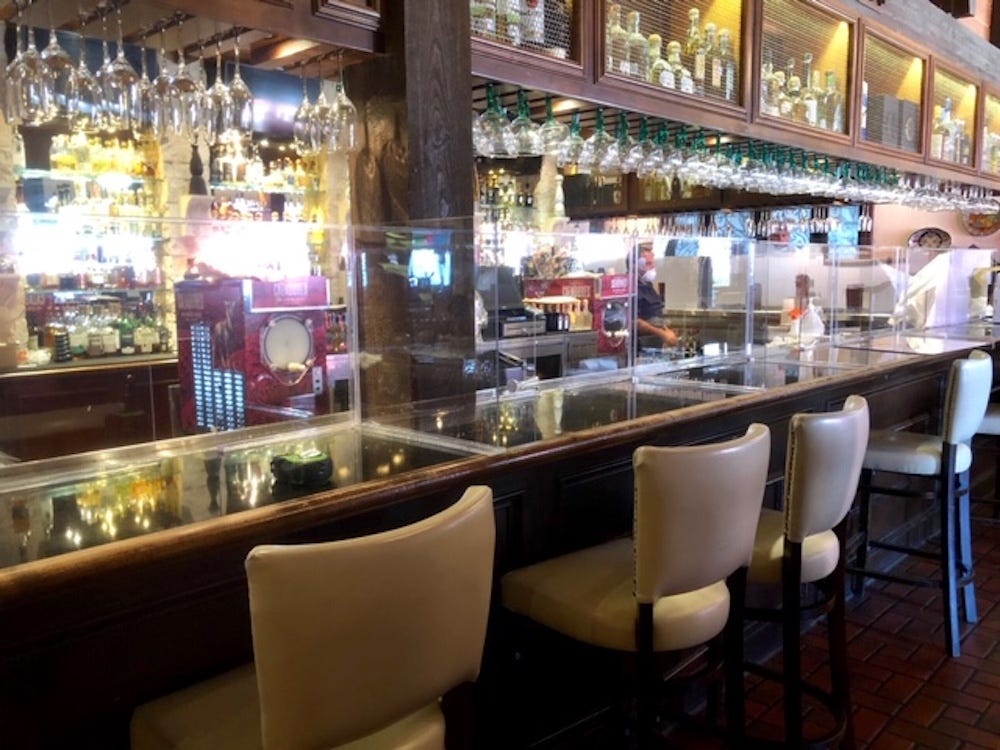 Courtesy of Nick De La TorreBarriers set up along the bar at the now-open Arnaldo Richards’ Picos Restaurant in Houston, Texas.

Richards said his main motive for installing the barriers was to protect his “employees first and then, of course, the customers.”

“They love it,” Richards said of his customers’ opinions on the barriers. “When they come in and they see the bar they go, ‘Wow!'”

On Mother’s Day, the restaurant hosted its regular holiday brunch buffet. But this time, instead of self-service, customers waited on one side of a plexiglass barrier while employees stood on the other, loading plates with whatever customers wanted.

Richards told Insider that he has a prototype of a foldable screen that he hopes to be able to use when his restaurant is allowed to open up at 50% capacity; that way, Richards said, customers would be able to request that a screen be placed between their table and the tables around them if they want. 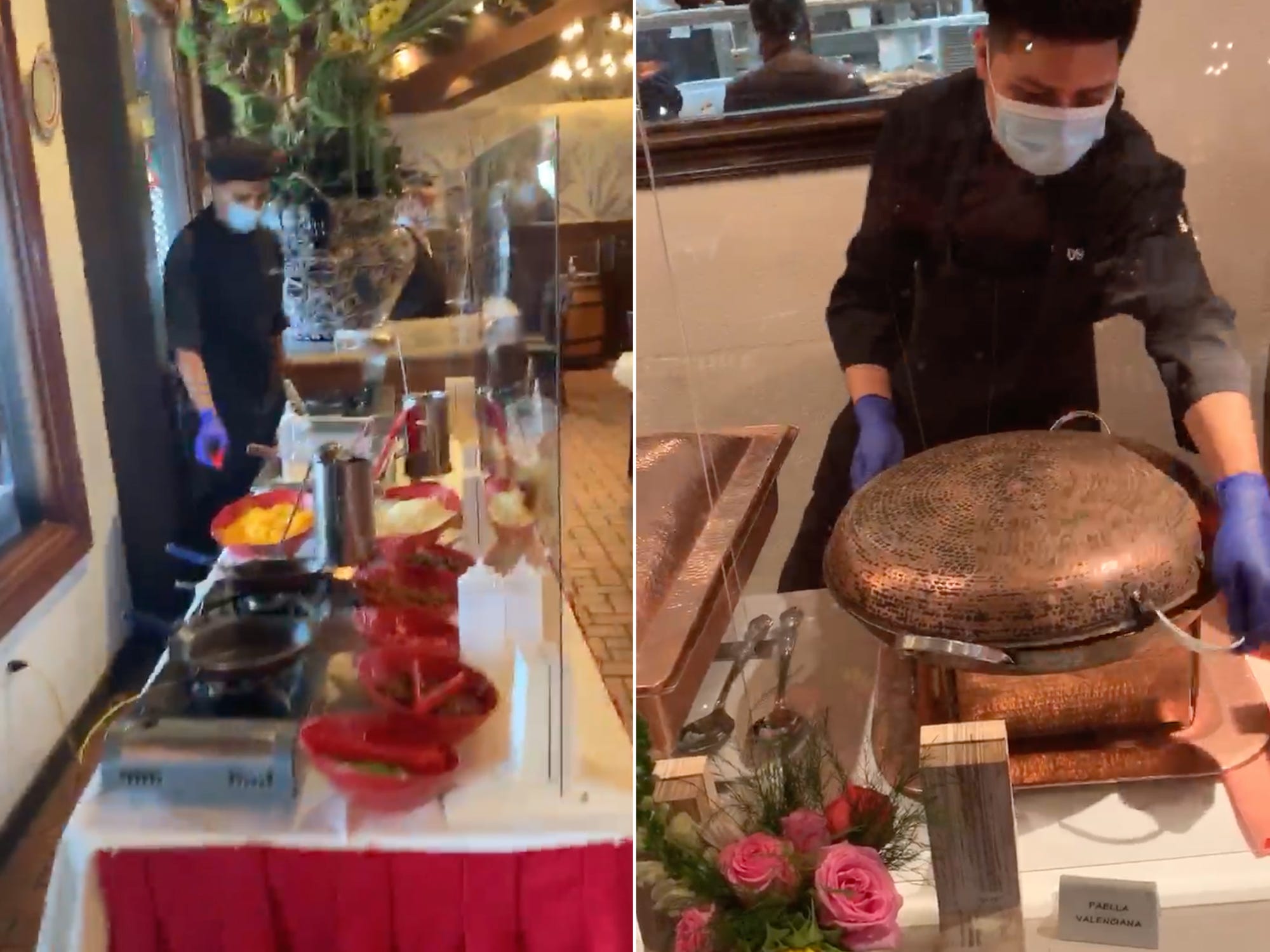 But some restaurateurs don’t like the idea of separating diners with barriers, and think keeping tables further apart is a better alternative

David D’Antonio, executive chef at Angelina a Testaccio Restaurant in Rome, told Insider via email that he hopes these barriers don’t become a requirement for restaurants in Italy.

“I think they can leave more space between tables and that is it,” he said, adding that he doesn’t find it necessary to “put any kind of barrier between people who choose to spend time together.”

D’Antonio continued: “Can you imagine that in a restaurant?” He said that he doesn’t see any reason why people would pay to sit in a restaurant if there is a barrier between them and the person they’re dining with. 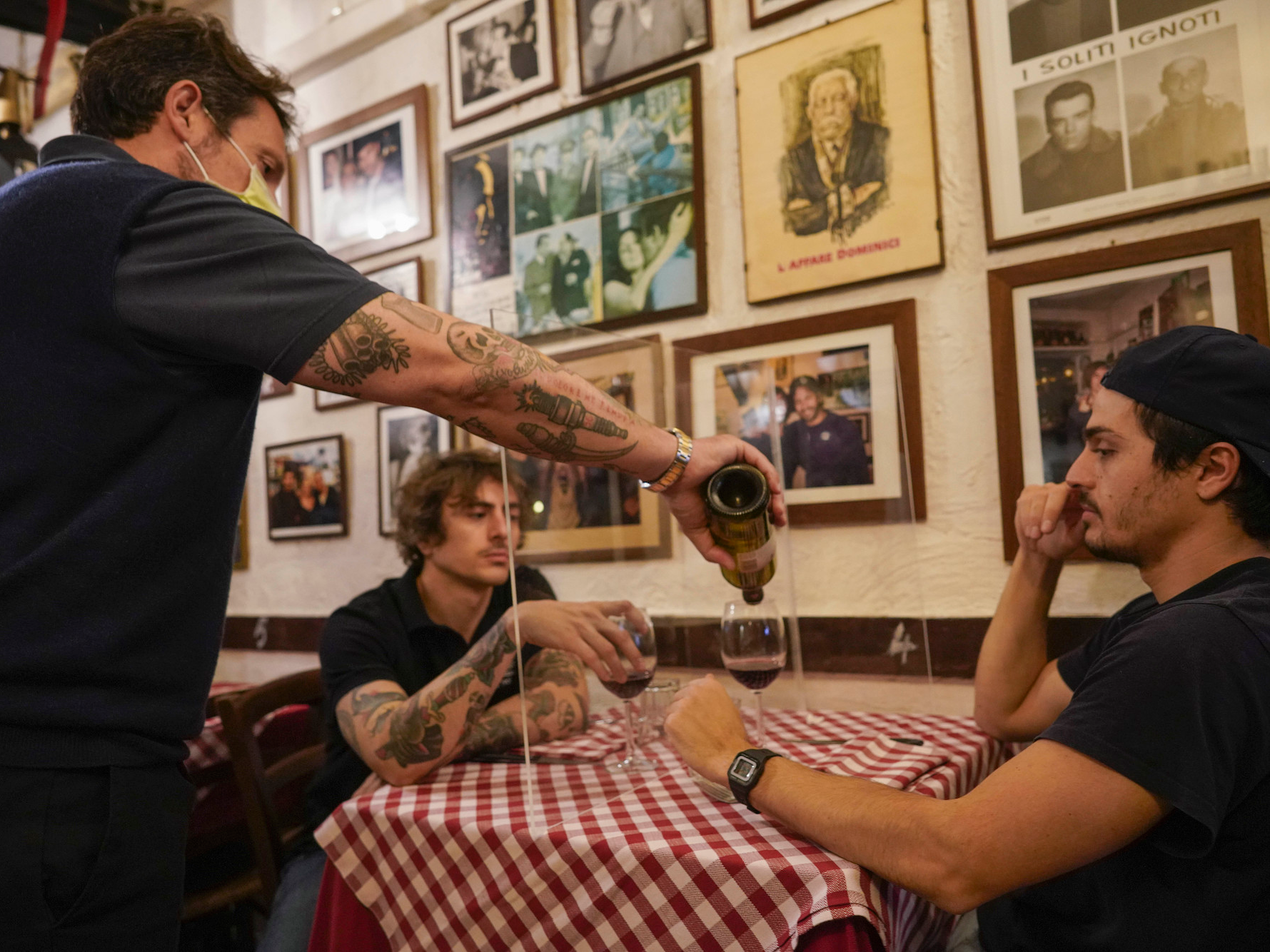 Andrew Medichini/AP PhotoA demonstration of how a plexiglass barrier separates two members of a single party at Ristorante Il Ciak.

“I don’t see that as a remedy,” he told Insider.

Giovanetti explained that having plexiglass on a table during lunchtime when people may be having informal business meetings may become acceptable. But, he said, having barriers up during evening service while people are trying to share an intimate meal would be a huge problem. He told Insider that he thinks it would actually discourage people from dining out.

The East Village restaurateur said that he’s been thinking about possible solutions since the day he had to close his restaurants down.

“Of course, I think about that every day,” Giovanetti said. “Now we are totally closed. I have a pretty large restaurant and I see all these empty seats.” (Gnocco is open for delivery via its own, in-house delivery service.)

Giovanetti thought back to March when restaurants in New York City were told to operate at 50% capacity.

“Fifty per cent capacity doesn’t say anything,” he said. “That’s the most stupid thing that someone can say. It doesn’t make any sense!”

The Gnocco owner went on to explain how being given a precise measurement between chairs or tables would be more effective than a capacity percentage: “I have three rooms [at Gnocco] for example, so should I close one room and stuff all the tables and chairs in the other room? [That guideline] leaves [room] for some crazy scenarios. I have a nice garden and I want to keep [all customers] there; shall I put everybody in the garden?” 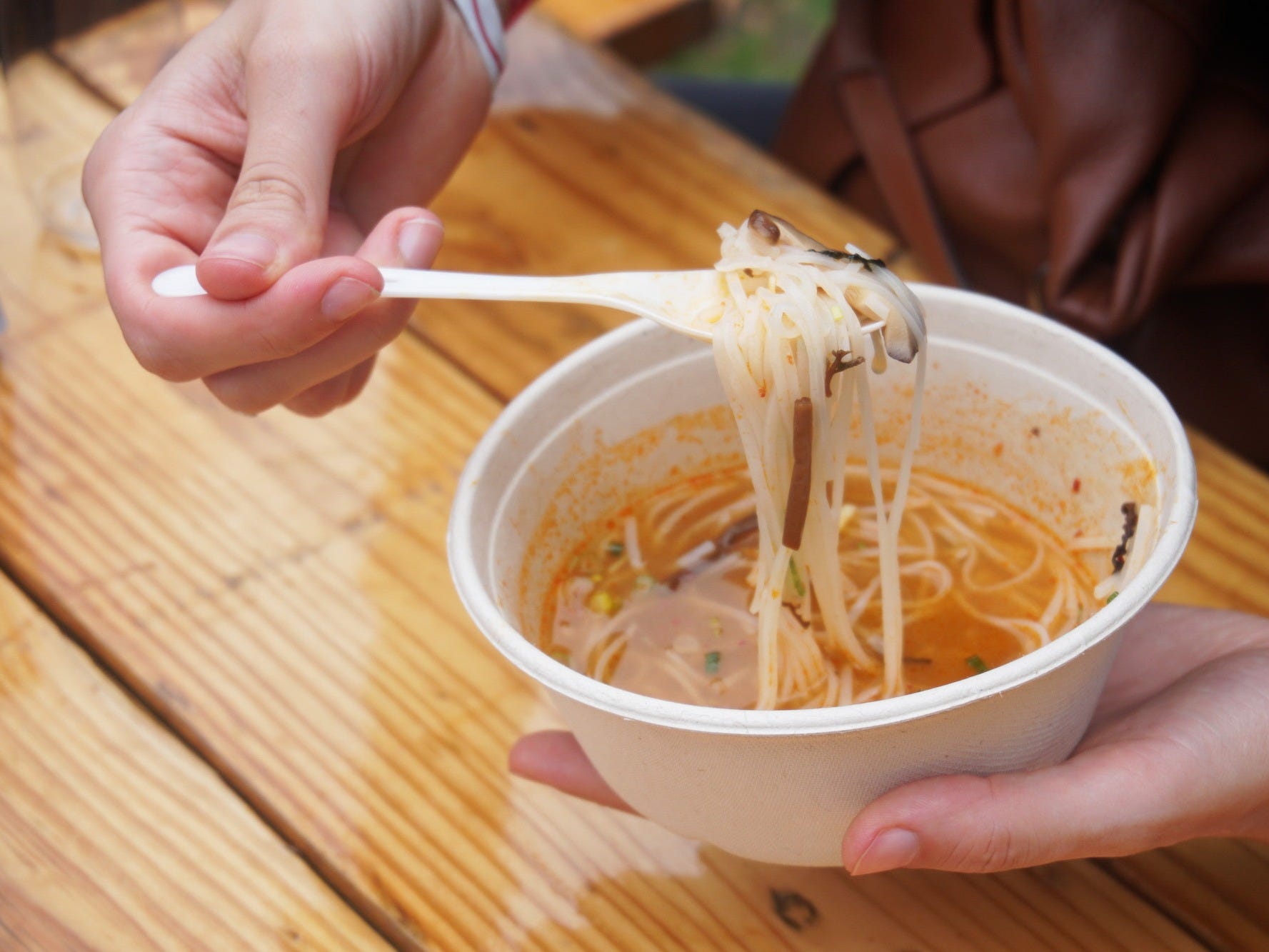 Restaurants in other parts of the US are thinking about alternative solutions, including shutting down streets to make room for outdoor dining

The New York Times reported that there is a laundry list of protocols being brainstormed, guidebooks being written, and safety measures being strategised throughout the US as restaurants begin to open in states including Georgia and Alaska.

The Food and Society Program at the Aspen Institute is working with the James Beard Foundation to come up with an effective set of guidelines for restaurants.

“There just isn’t a map for this,” Pernice said. “You have to make the best decisions with the terrain that’s in front of you.”

Restaurants and local officials in Berkeley, California, are working together to come up with a different solution.

Eater San Francisco reported that Berkeley is planning to completely shut down streets so that restaurants can move their dining rooms outside to have more space for social distancing.

While it’s hard to know exactly how dining out will change, restaurants all over the world are trying to find their footing.

Some in Amsterdam have created outdoor seating houses for small parties, while restaurants in China and Taiwan – in addition to making use of barriers – are employing temperature checks, sanitization measures, and blocking off tables. There’s even a restaurant in the middle of a meadow in Sweden that only serves one person at a time.

I’m a Trader Joe’s employee working during the pandemic in New York. Here’s what I wish shoppers would do differently.