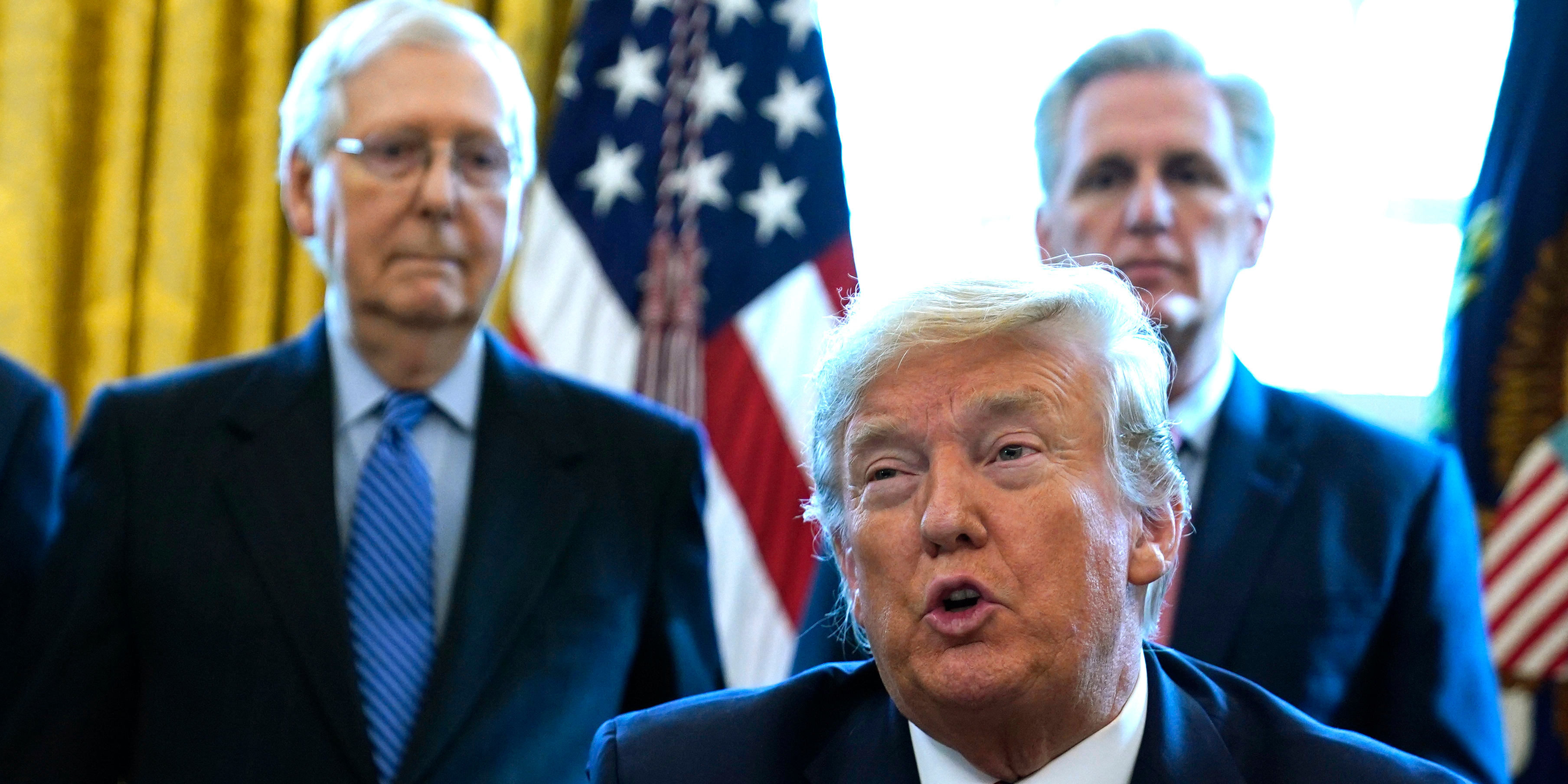 The chorus of Republican calls to oppose an emergency infusion of federal aid to state governments is growing louder. The proposal is a key Democratic priority in the next coronavirus economic relief bill.

On Monday, President Trump assailed it, and on Twitter cast Democratic-led states in particular as irresponsible spenders.

“Why should the people and taxpayers of America be bailing out poorly run states (like Illinois, as example) and cities, in all cases Democrat run and managed, when most of the other states are not looking for bailout help?” he said.

That was mirrored by other GOP lawmakers like Sen. Rick Scott of Florida, who argued it would be unfair to taxpayers in the conservative-leaning state he once governed.

“It’s not fair to the taxpayers of Florida. We sit here, we live within our means, and then New York, Illinois, California, and other states don’t,” Scott told reporters. “And we’re supposed to go bail them out? That’s not right.”

Senate Majority Leader Mitch McConnell perhaps went the furthest last week, bringing back an idea that Republicans pushed for in the aftermath of the Great Recession: Let states go bankrupt instead. The comments, though, triggered intense blowback from Republican and Democratic governors, and he softened his position on it.


Read more:
Bank of America says an under-the-radar gauge of volatility is warning that the bear market is not over – and shares 2 cheap trades to protect against the next drop

There’s a strain of thinking among Republicans that “bailing out” states would essentially put taxpayers on the hook for reckless spending practices, despite the fact many state governments had bolstered their cash reserves after the Great Recession.

It also ignores that the virus is wreaking economic havoc regardless of a state’s political stripes. There’s ample evidence indicating that the downturn could be significantly worse if state governments are forced to cut public services and fire workers, as they have been warning up to now.

The Washington Post reported on Wednesday that states and cities nationwide are gearing up to make withering cuts to critical services absent further federal aid. Up to 1 million municipal jobs are at risk, stretching across sectors like sanitation, education, safety, and health.

During the Great Recession, states also had to contend with plummeting tax revenues as millions of people lost their jobs.

President Barack Obama attempted to address the shortfall through the 2009 stimulus law, which directed $US275 billion in additional federal funding to shore up Medicaid and a range of energy, education, and transportation programs.

But it was not enough to money to stanch the economic damage wrought by the financial crisis. Shared by CNBC economics reporter Steve Liesman, the two charts below illustrate the severe downturn among state governments, which shed jobs for four straight years, including those of 272,000 education workers.

Here in 2 charts is why the Pres. should aid state & local govt's: in the last recession, they continued to shed jobs for 4 years after the 09 recession ended, including 272k education workers. State & local gov'ts subtracted from GDP until 2013. pic.twitter.com/EnWMQIS71r

State and local government subtracted from overall gross domestic product until 2013, according to the data from Haver Analytics and the Bureau of Economic Analysis.

That experience is creating a shared sense of urgency among state leaders crossing party lines. A bipartisan letter from the National Governors Association called for $US500 billion in additional aid, and governors are pleading with Washington for immediate help.

“The alternative is not bankruptcy,” New Jersey Gov. Phil Murphy said Monday on CNBC. “The alternative is we will gut the living daylights out of the very services that our folks now are desperately relying upon in what is the biggest healthcare crisis in the history of our country.”

Congress already allotted $US150 billion in state and local aid as part of the $US2.2 trillion Cares Act approved last month, though much of the money was mandated for only coronavirus-related expenditures state governments hadn’t expected. And they can’t use the aid to reduce their budget shortfalls.


Read more:
Goldman Sachs outlines a 3-part investing strategy to profit from the economy’s reopening – including 4 stocks to buy for the recovery

Cuomo blasted McConnell earlier this week during one of his press conferences, saying the Republican Senate leader should be more upfront about what the federal aid is capable is covering.

Many local leaders are urging Congress to make aid to states a key concern similar to the federal help extended to large businesses in the last massive coronavirus relief bill.

Lee Saunders, the president of the American Federation of State, County and Municipal Employees, AFL-CIO, told The Post that the public sector employees that his union represents “need to be a priority just as the corporations and small businesses were.”