Republicans say they will push ahead with Supreme Court hearings despite Trump and Sen. Mike Lee's coronavirus diagnoses 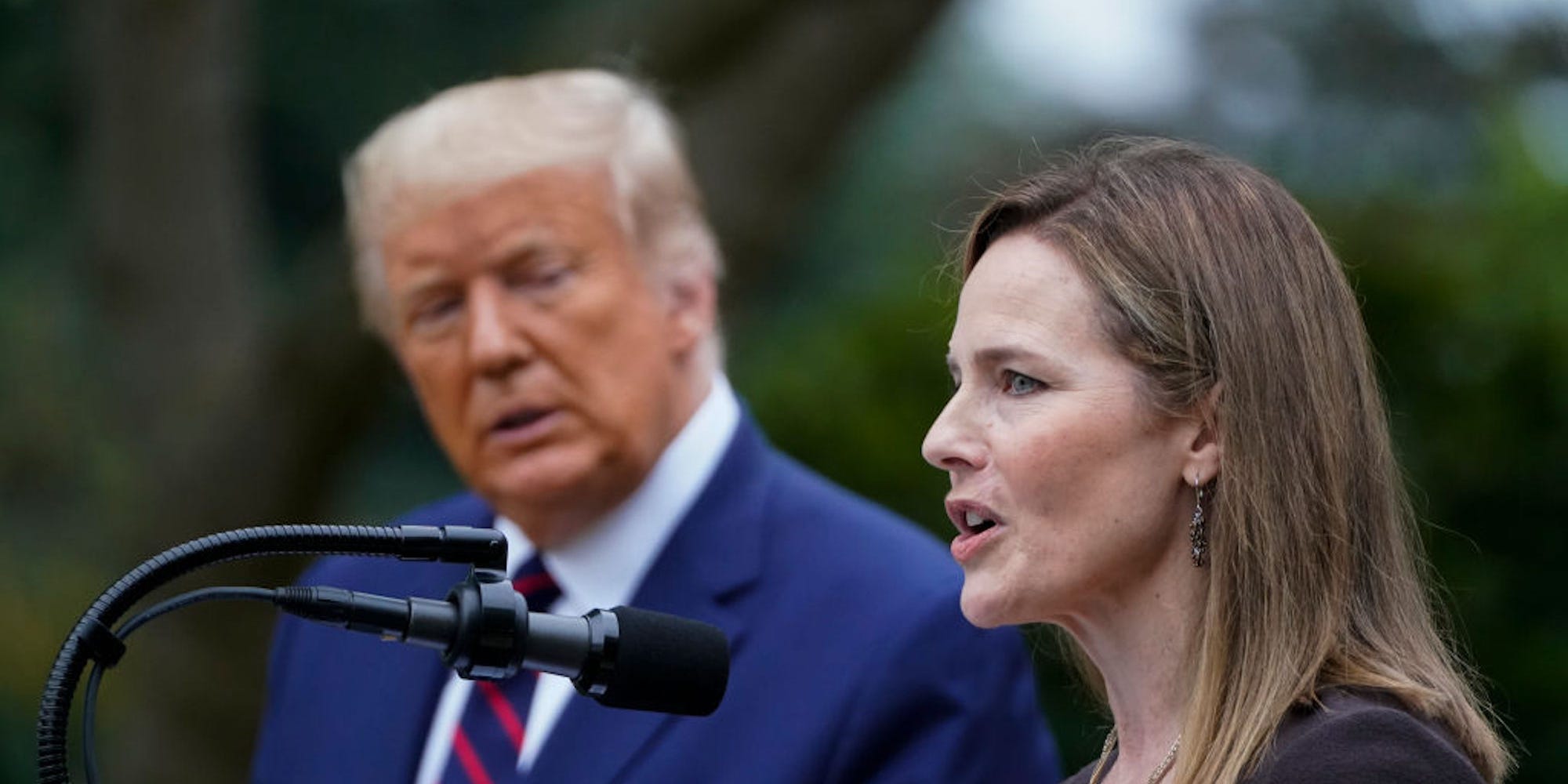 Jabin Botsford/The Washington Post via Getty ImagesJudge Amy Coney Barrett speaks as President Trump announces her nomination of as his choice for associate justice of the Supreme Court in the Rose Garden of the White House on Saturday, Sept. 26, 2020.

Senate Republicans, led by Majority Leader Mitch McConnell, say they will push ahead with Supreme Court nomination hearings for Judge Amy Coney Barrett, even after both the president and GOP Sen. Mike Lee, a member of the Judiciary Committee, tested positive for COVID-19 this week.

Senate Democrats are calling for the hearings, scheduled to begin on October 12, to be delayed until the full scope of the virus outbreak on Capitol Hill and in the White House is known.

“Just finished a great phone call with @POTUS,” McConnell tweeted Friday morning. “He’s in good spirits and we talked business â€” especially how impressed Senators are with the qualifications of Judge Barrett. Full steam ahead with the fair, thorough, timely process that the nominee, the Court, & the country deserve.”

McConnell and the GOP Senate majority don’t need Democratic consent to begin the hearings. But two Republican senators, Lisa Murkowski of Alaska and Susan Collins of Maine, have already said they will oppose a SCOTUS nomination before the inauguration. The GOP has a 53-47 majority in the Senate and can only afford to lose one additional Republican vote on Barrett.

“It is premature for Chairman Graham to commit to a hearing schedule when we do not know the full extent of potential exposure stemming from the president’s infection and before the White House puts in place a contact tracing plan to prevent further spread of the disease,” Schumer and Feinstein said.

Lee, who said he received his positive test results on Thursday, said he would isolate for 10 days and will be back on Capitol Hill in time for Barrett’s hearings. Lee met with Barrett in his Senate office on Tuesday â€” neither wore a mask and they were photographed standing close together.

“I have spoken with Leader McConnell and Chairman Graham, and assured them I will be back to work in time to join my Judiciary Committee colleagues in advancing the Supreme Court nomination,” Lee said Friday.

I was remarkably impressed by Judge Barrett. My meeting with her was fantastic. She is a judge, a legal scholar, and a lawyer with outstanding credentials. We had a great conversation and I am very much looking forward to speaking with her more during her confirmation hearing. pic.twitter.com/rfGt717PlW

The Centres for Disease Control and Prevention recommends that anyone who has tested positive for the coronavirus isolate for at least 10 days after they first show symptoms and for at least 24 hours after their fever breaks. If a case is severe, the person should isolate for up to 20 days.

McConnell suggested on Friday that the Senate confirmation hearings could be held remotely if necessary.

“Every precaution needs to be taken because we don’t anticipate any Democratic support at all, either in committee or in the full Senate, and therefore everybody needs to be in an all-hands-on-deck mind-set,” McConnell told right-wing radio host Hugh Hewitt on Friday morning. “Our biggest enemy, obviously, is what we were talking about at the beginning of the interview â€” the coronavirus, keeping everybody healthy and well and in place to do our job.”

Some Democrats are demanding that every lawmaker, staffer, and other worker in the Capitol be tested for the coronavirus and business be paused.

“Everyone in the Capitol complex needs to be tested. Every Republican Senator or staff member who was in close contact with Trump needs to quarantine,” Sen. Chris Murphy tweeted Friday. “No business should proceed in the Senate until we understand the scope of this crisis.”

Democrats have already demanded that Justice Ruth Bader Ginsburg’s replacement be nominated by the winner of the presidential election. Republicans blocked President Barack Obama’s 2016 nomination of Judge Merrick Garland to the Supreme Court, arguing that a SCOTUS pick shouldn’t be made in an election year. At last one million Americans have already cast their ballots in this November’s presidential election.

All ten Democratic members of the Judiciary Committee formally requested that the hearings be delayed on Thursday, hours before the president and first lady announced they’d been infected with the coronavirus.

“The timeline for consideration of Judge Barrett’s nomination is incompatible with the Senate’s constitutional role,” Sen. Dianne Feinstein, the Judiciary Committee’s ranking Democrat, said in a statement. “We again urge you to delay consideration of this nomination until after the presidential inauguration. The Senate and the American public deserve a deliberative, thorough process, and this falls far short.”

Barrett tested negative for the coronavirus on Friday, the White House announced. Barrett last met with Trump last Saturday, when the president announced her nomination during a Rose Garden gathering where few wore masks or socially distanced. The judge has met with more than 30 senators on Capitol Hill over the last three days.

“Judge Barrett was with the President last on Saturday when she was nominated,” White House spokesman Judd Deere said in a statement. “Judge Barrett is tested daily for COVID-19â€”she has tested negative.”

The judge was infected with COVID-19 and recovered this summer, The Washington Post reported Friday.

That White House Rose Garden gathering for Barrett’s nomination is being scrutinised after Sen. Lee and Notre Dame University President John Jenkins, who both attended the event and were seen interacting closely with others without a mask on, tested positive for the virus days later.

At the event, Lee was seated near four other GOP members of the Judiciary Committee: Ben Sasse of Nebraska, Mike Crapo of Idaho, Josh Hawley of Missouri, Thom Tillis of North Carolina, and Marsha Blackburn of Tennessee. Lee also attended multiple Senate committee meetings and at least one GOP lunch in the days after.