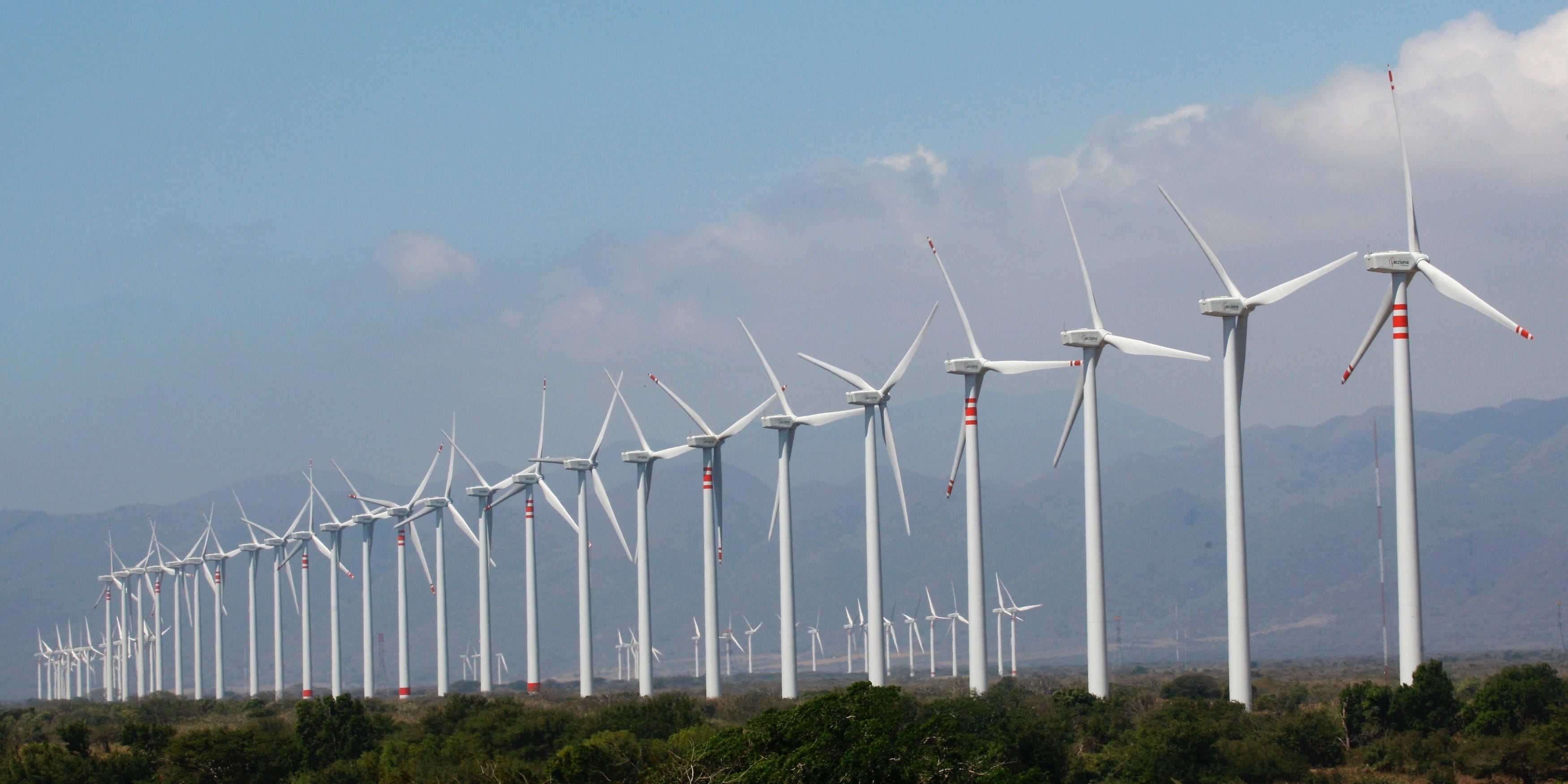 Jorge Luis Plata/REUTERSWind turbines are seen in La Ventosa February 7, 2012. Surrounded by towering turbines in every direction, the town of La Ventosa – which means ‘the windy place’ in Spanish – is at the heart of a wind power boom in the country. Mexico, the world’s 14th biggest economy, still punches well below its weight in terms of wind energy, ranking 24th on the planet in installed capacity last year, according to the Global Wind Energy Council (GWEC). But the market is growing fast. By the end of this year, the national wind energy association expects Mexico to jump to number 20 on the list. Picture taken February 7, 2012.

The transition to renewable power from traditional fuels will create a $US16 trillion investment opportunity through 2030 as spending shifts to new infrastructure, Goldman Sachs analysts said Tuesday.

The bank projects green-energy spending to pass that of oil and gas for the first time ever next year and account for roughly 25% of all energy spending. The share stood at just 15% in 2014, but a dive in fossil-fuel investing over the past decade shifted more dollars to clean energy initiatives.

If the nation aims to hold global warming within 2 degrees Celsius, the move toward renewable energy would create between $US1 trillion and $US2 trillion in yearly infrastructure spending, the team led by Michele Della Vigna wrote in a note to clients. Economic downturns have historically slowed efforts to boost clean energy investing, but Goldman sees the coronavirus downturn bucking that trend and accelerating the nationwide pivot.

“We believe this time will be different, especially for technologies that are now mature enough to be deployed at scale and can benefit from a falling cost of capital and an attractive regulatory framework, unlocking one of the largest infrastructure investment opportunities in history on our estimates,” the team wrote.

Read more: Schwab’s global investing chief says the market’s best-performing stocks are due for a surprising rotation for the first time in 12 years – and shares 3 ways to get ahead of the shift

The decade-long strategy isn’t without its risks. Goldman warned that low cost of capital and an attractive regulatory framework are “essential” to moving green infrastructure forward. Such projects can be as much as three-times more demanding of capital and jobs compared to traditional energy developments. If either side of the public-private collaboration falters, the transition will slow dramatically, the bank said.

Two-speed de-carbonization also poses a threat to the firm’s outlook. Fiscal and monetary aid will likely boost mainstream clean-energy initiatives like solar and wind power. Yet growing technologies like clean hydrogen and the creation of carbon markets risk being placed on the back-burner. If the latter efforts can’t gain access to sufficient capital, the long-term plan to slash carbon emissions will stall, Goldman warned.

“This may ultimately delay the technological breakthroughs necessary to flatten the de-carbonization cost curve and achieve cost-efficient net zero carbon,” the team wrote.


Wall Street’s best US and international stock-pickers have tripled their clients’ money since 2010. The duo break down 5 future-proof companies that will keep investors ahead of the pack through 2030.