How Reese Witherspoon became the queen of streaming, from 'The Morning Show' to 'Little Fires Everywhere' 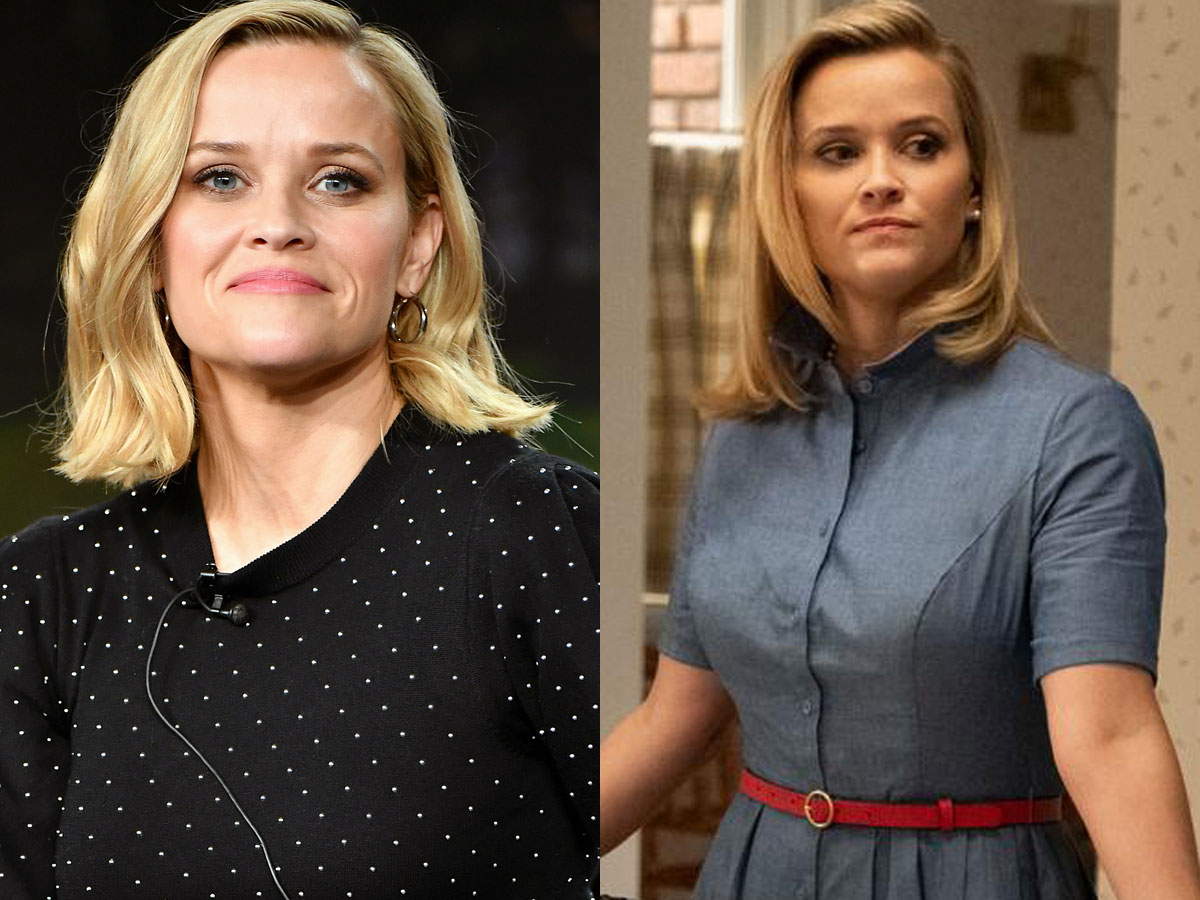 Reese Witherspoon currently has shows either airing or in development at almost all of the major streaming services: Netflix, Hulu, Amazon, Apple TV Plus, and even Quibi. All she needs is a Disney Plus show!

After her production company Little Sunshine received 18 nominations for the 2020 Emmy Awards, we’re taking a look at how she became one of the biggest names in streaming over the past four years, from cameoing on her friend’s Hulu show, to earning multiple Emmy nomination for producing “The Morning Show” and “Little Fires Everywhere,” as well as the new shows and movies she has lined up.

Reese Witherspoon’s first foray into production was with her company Type A Films, which she founded in 2000. 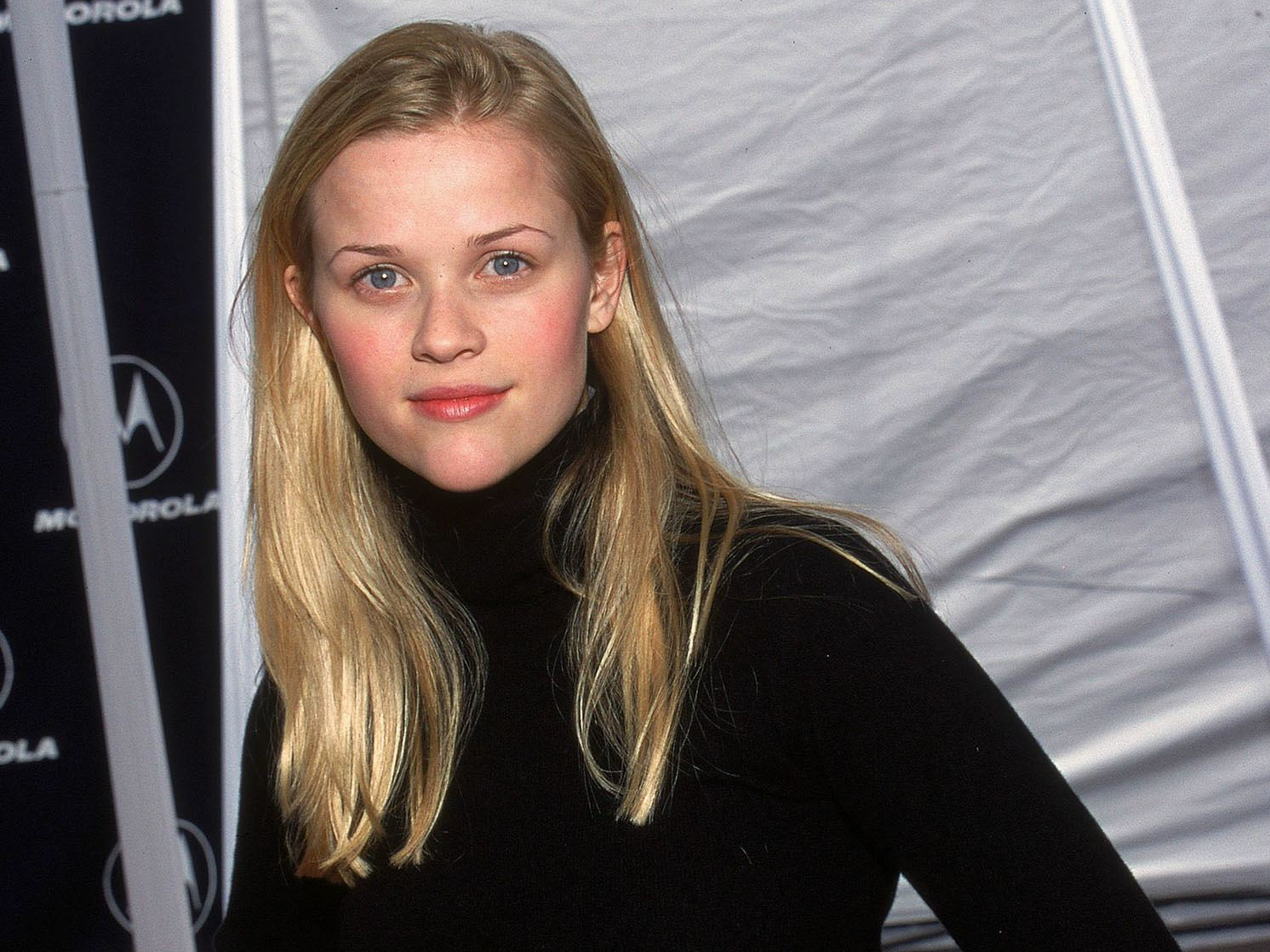 Type A Films produced one of Witherspoon’s most iconic films, “Legally Blonde,” and its sequel. Type A also funded “Penelope,” and “Four Christmases.”

In 2012, it merged with another company to become Pacific Standard, which produced films like “Gone Girl” and “Wild.” 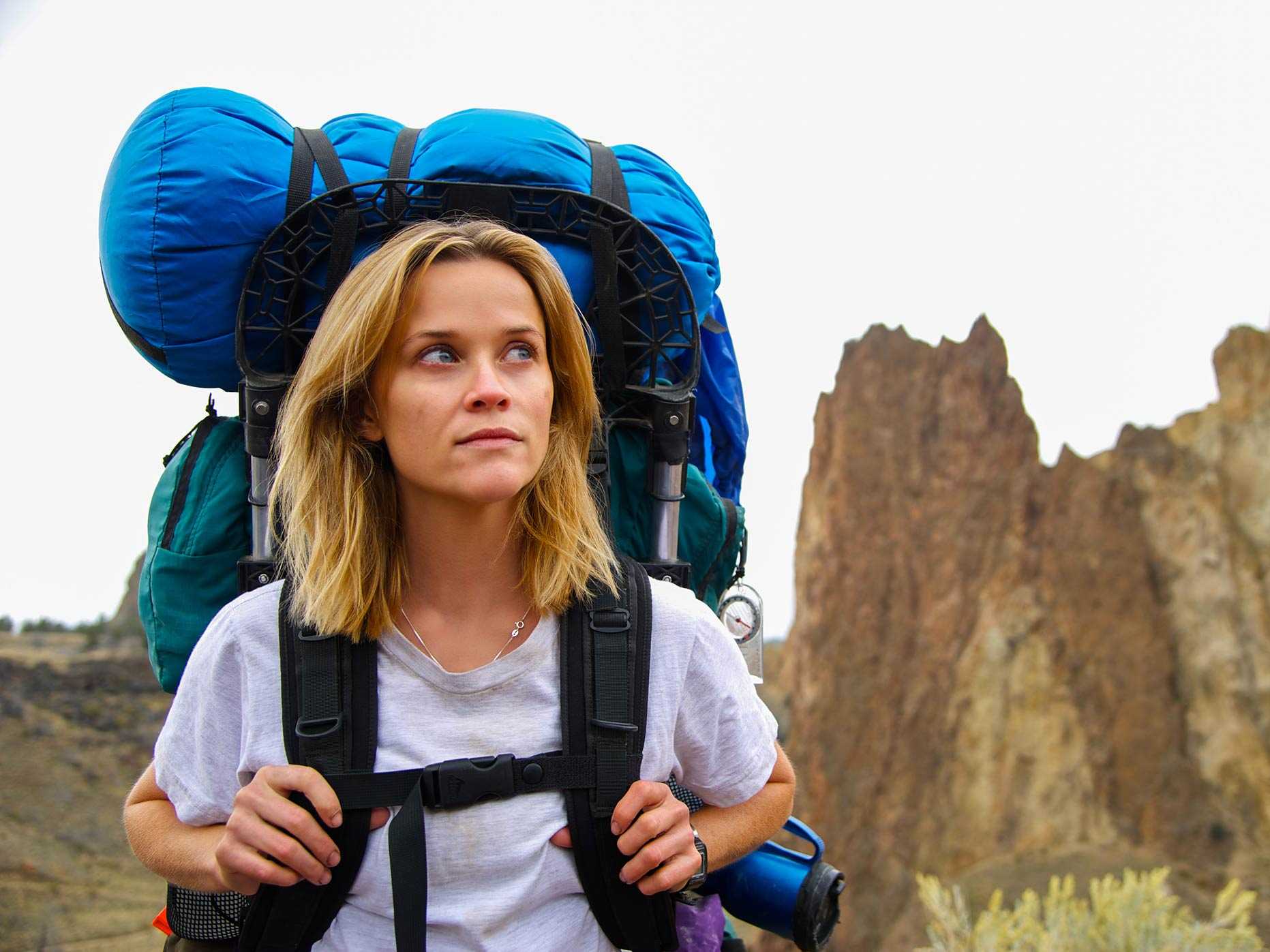 Other films produced by Pacific Standard include “Hot Pursuit,” “Lucy in the Sky,” and “The Dry.” 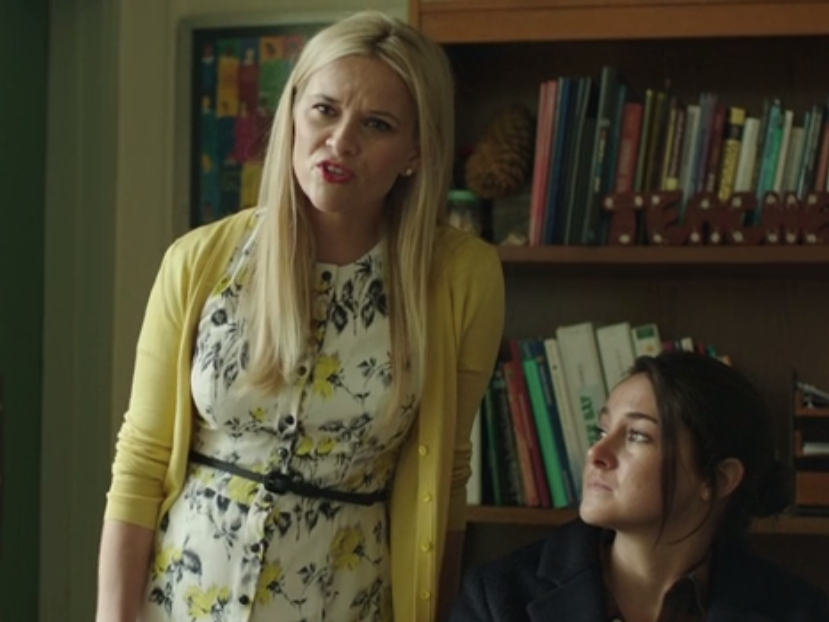 “Big Little Lies,” based on the hit book by Liane Moriarty, would go on to become a phenomenon, and was nominated for 16 Emmys, winning eight in season one. It also proved that there was a growing market for female-driven stories on TV, especially on premium platforms like HBO or, of course, on streaming networks.

According to HBO, the second season of the show averaged 10 million viewers per episode. It was also nominated for another five Emmys for season two, for production design, casting, makeup, and for Laura Dern and Meryl Streep’s performances. 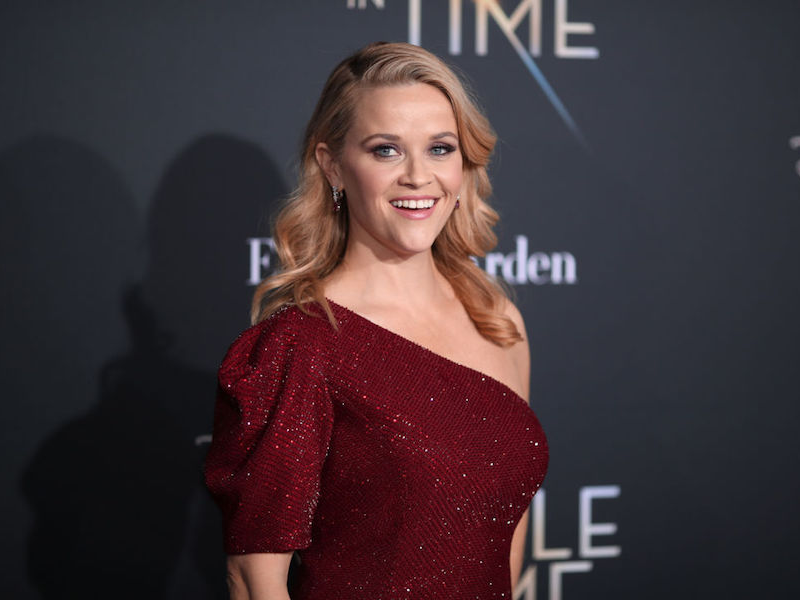 “My lifelong passion has been to tell women’s stories with authenticity and humour,” said Witherspoon in a statement. “Hello Sunshine is deeply committed to creating content that will reach women where they spend time, whether it is at a movie theatre, at home or on their mobile device. Women are looking for entertainment that speaks to them about what they value. Hello Sunshine will make content that entertains, educates and brings women together.”

The following year, Witherspoon made her streaming debut, in an episode of “The Mindy Project” as herself. 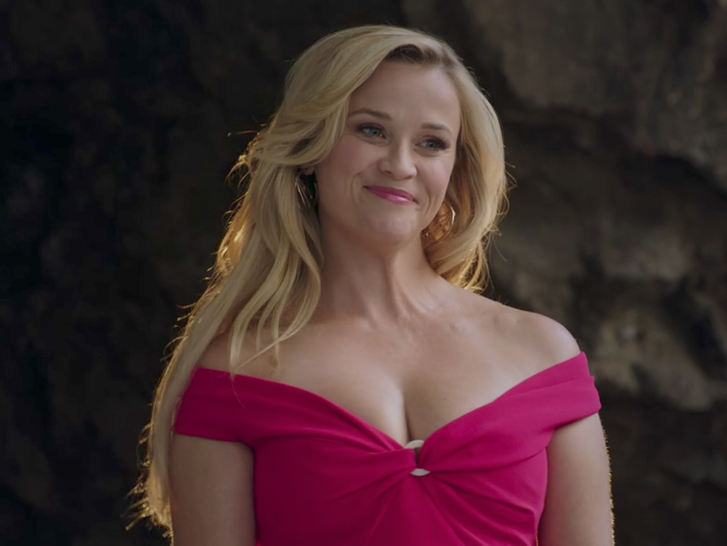 HuluWitherspoon on ‘The Mindy Project.’

She appeared in an episode as herself, after she became close with the show’s creator and star, Mindy Kaling, on the set of “A Wrinkle in Time.” Kaling also has her own production company, Kaling International. The first show, “Handmade*Mostly,” was about small businesses run by women selling crafts or art, like stationery, murals, or 3D-printed violins.

The second show was named “Turning Point,” in which successful women, such as StyleSeat co-founder Melody McCloskey or designer Melody Ehsani, shared the so-called “turning points” in their careers.

Her third show aired on Facebook Watch and IGTV, and was called “Meet My Mum” which, as you might have guessed, revolved around different celebrities, like Witherspoon, Ashley Graham, Lilly Singh, and Adam Rippon interviewing their mothers.

On “The Morning Show,” Witherspoon and Jennifer Aniston co-star as two morning show anchors struggling to deal with the fallout of former co-anchor Mitch (Steve Carell) getting fired and being accused of sexual misconduct.

“The Morning Show” had been in development since 2017. Witherspoon described her pivot to producing as “betting on herself,” in an interview on NPR. “I know every producer in Hollywood. I know how to get a movie from book to script to screen, and I know how to market it.”

Production started on season two in 2020, though it was shut down due to the coronavirus pandemic. 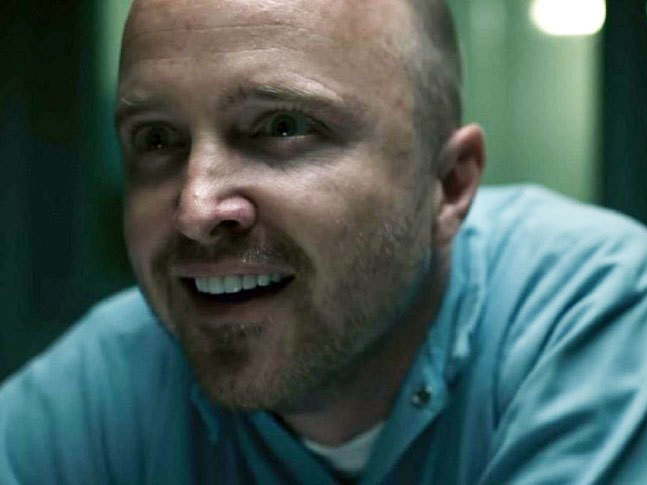 The show is based on a novel called “Are You Sleeping” by Kathleen Barber. As Vulture writes, the show is “about a true crime podcaster, played in the series by Spencer, who’s attempting to prove the innocence of a convicted killer,” played by Paul.

At this year’s NAACP Image Awards, the show’s creator and writer Nichelle Tramble Spellman won the Outstanding Writing in a Drama Series category. Octavia Spencer was also nominated for her role.

“Truth Be Told” was renewed for a second season in March 2020.

Witherspoon’s next streaming venture was the Hulu miniseries “Little Fires Everywhere,” which she produced and starred in. 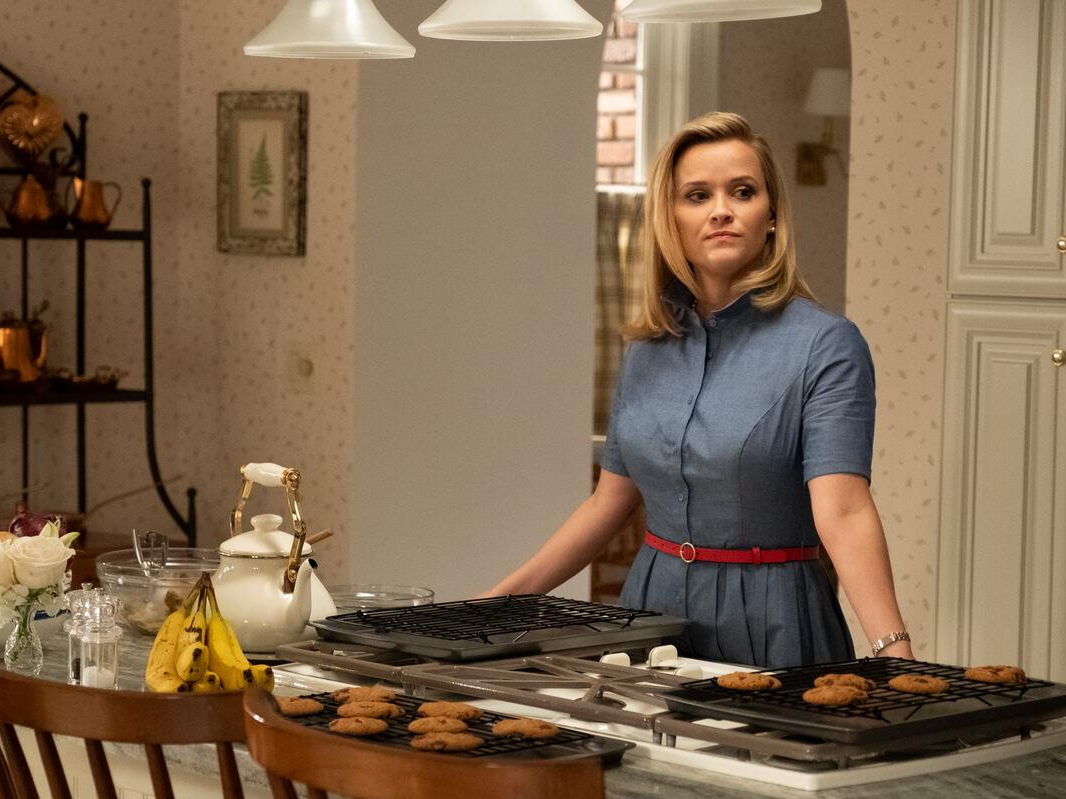 “Little Fires Everywhere” is based on the novel of the same name by Celeste Ng. It premiered in March 2020, and co-stars Kerry Washington, Joshua Jackson, and Rosemarie DeWitt. Witherspoon plays Elena Richardson, a mother who has a complicated relationship with Washington’s character, Mia Warren.

According to Deadline, Witherspoon discovered the book before it was published, and then chose it as her book club pick in September 2017.

“At Hello Sunshine, we strive to shine a light on female-driven stories that are rooted in inspiration, emotion and truth – all of which form the bedrock of Celeste Ng’s ingenious work,” said Witherspoon.

For the 2020 Emmys, “Little Fires Everywhere” was nominated for five awards, including Best Limited Series and a nomination for Washington. 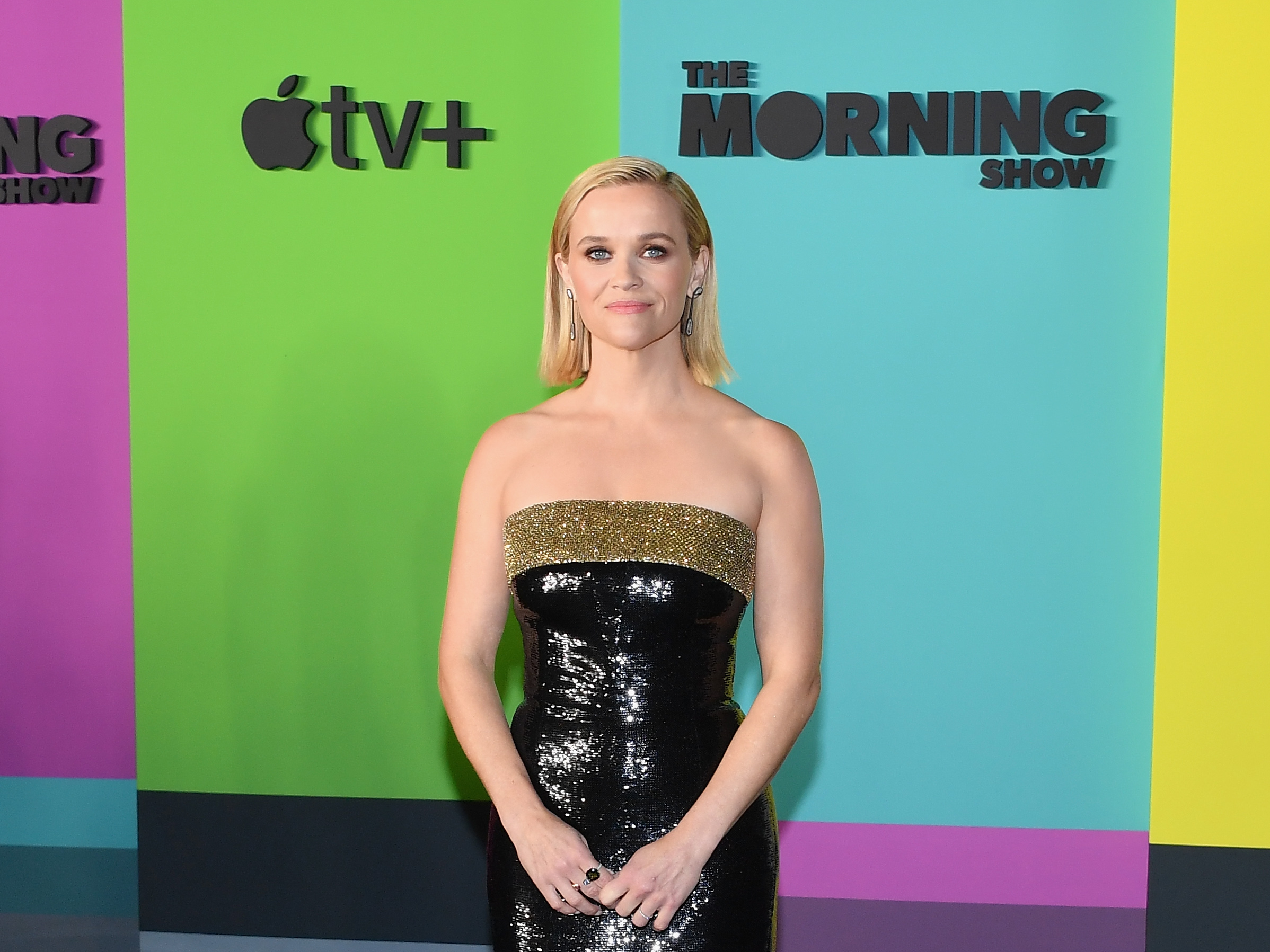 Angela Weiss/Getty ImagesWitherspoon at the premiere of ‘The Morning Show.’

The show, created by Colleen McGuinness, is the streaming service’s first ordered half-hour comedy, and was confirmed in January 2018. It’s based upon a short story collection, “You Think It, I’ll Say It,” written by Curtis Sittenfeld.

Kristen Wiig was originally set to star, but she exited due to scheduling conflicts with “Wonder Woman 1984.” 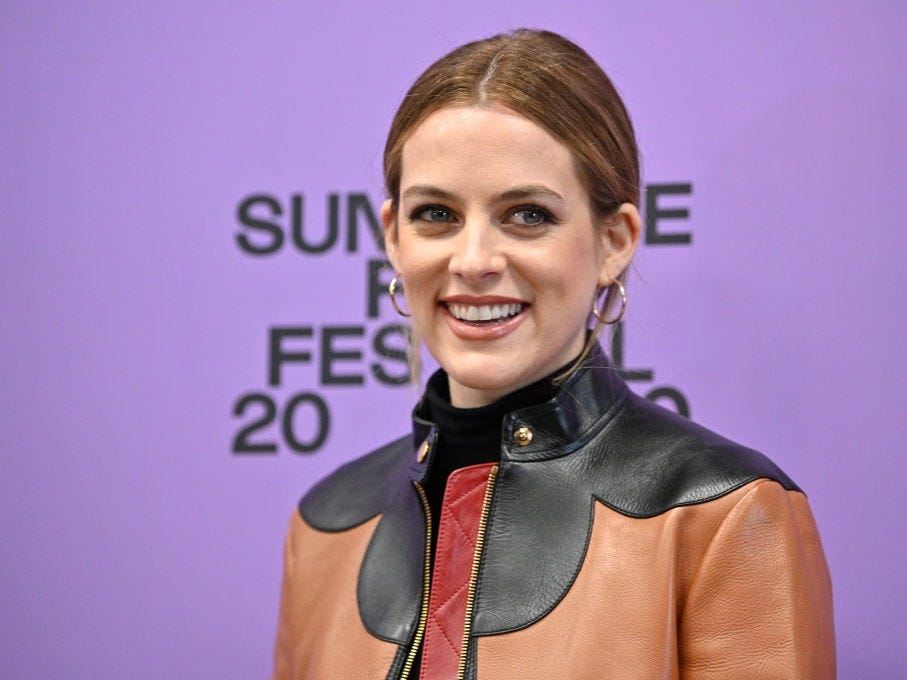 The show is based on the Taylor Jenkins Reid novel of the same name. It will be “a 12 episode musical drama detailing the rise and precipitous fall of a renowned rock band in the 1970s.” Keough’s casting is a bit of serendipity, as her grandfather is none other than the King himself, Elvis Presley.

A third series, “From Scratch,” is set to be released on Netflix. It’s based on the memoir of Tembi Locke, who will be played by Zoe Saldana. 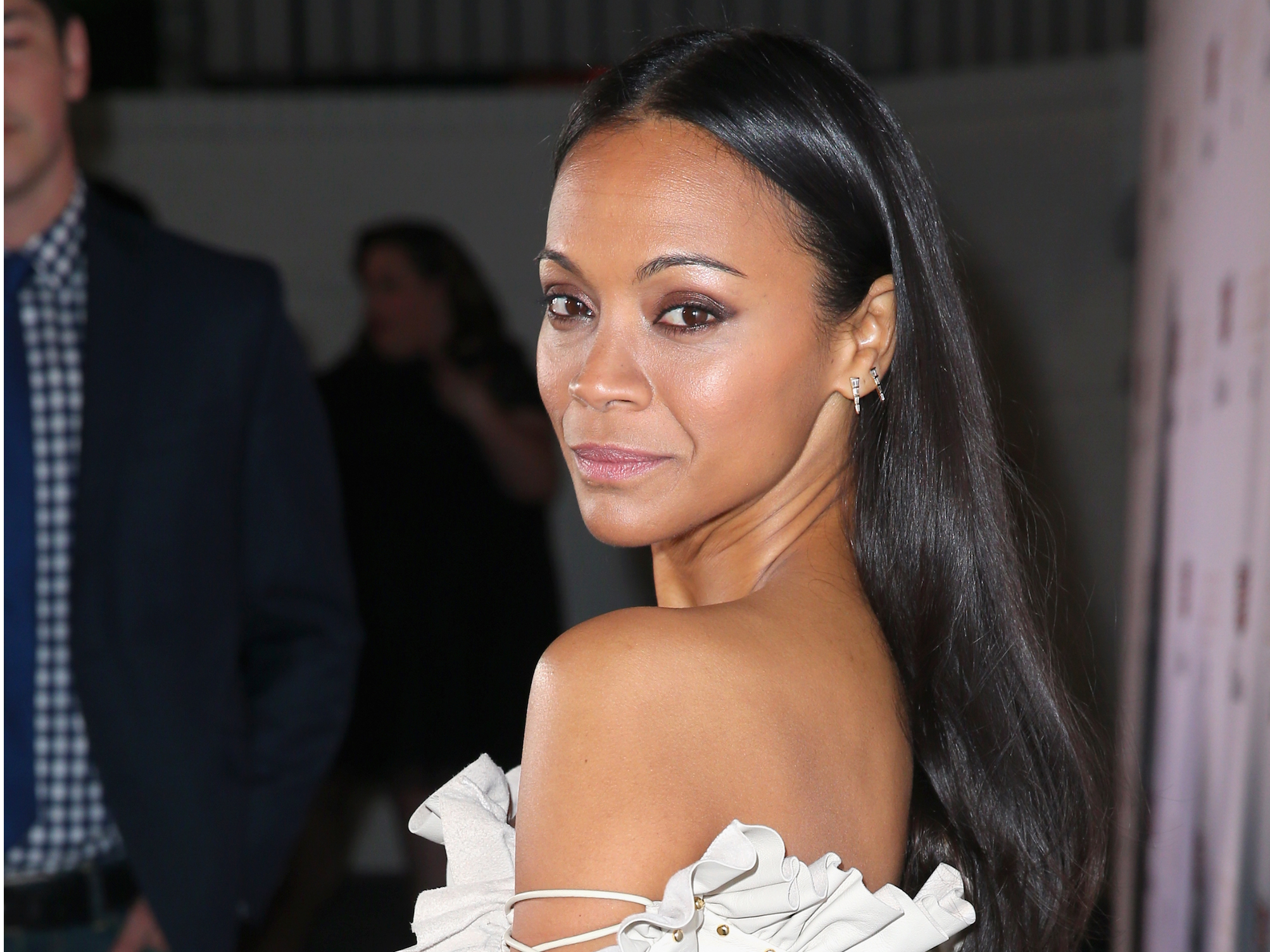 “From Scratch” was published in April 2019, and was a Hello Sunshine book club pick the following month. The memoir, written by Locke, is about her experience as an American woman falling in love with a Sicilian man while studying abroad in Italy, building a life with him in the US, and then unexpectedly losing him to illness.

According to Deadline, “she is challenged to pull herself through grief so she can raise their daughter as they would have raised her together: with hope, joy and infinite love.”

Saldana is also an executive producer for “From Scratch.”

“[Locke’s] memoir is a raw and tender exhibition of life in all its pieces. She brings you into her love, her loss and her resilience with such vulnerability and strength. We immediately fell for Attica and Tembi’s vision and feel honoured to have the opportunity to help bring it to life onscreen,” said Witherspoon. “Fierce Queens” was announced on International Women’s Day, which makes sense – this show is all about the fiercest females in the animal kingdom.

According to The Wrap, the show is about “phenomenal female animals: the rebel matriarchs, powerful leaders and dangerous lovers of the natural world. From hyenas to fireflies, meerkats to humpback whales, the documentary series will bring you the most dramatic natural history stories from a fresh female perspective.”

The next month, it was announced that Witherspoon will star in two Netlix rom-coms that Hello Sunshine will produce, including one directed by Aline Brosh McKenna. 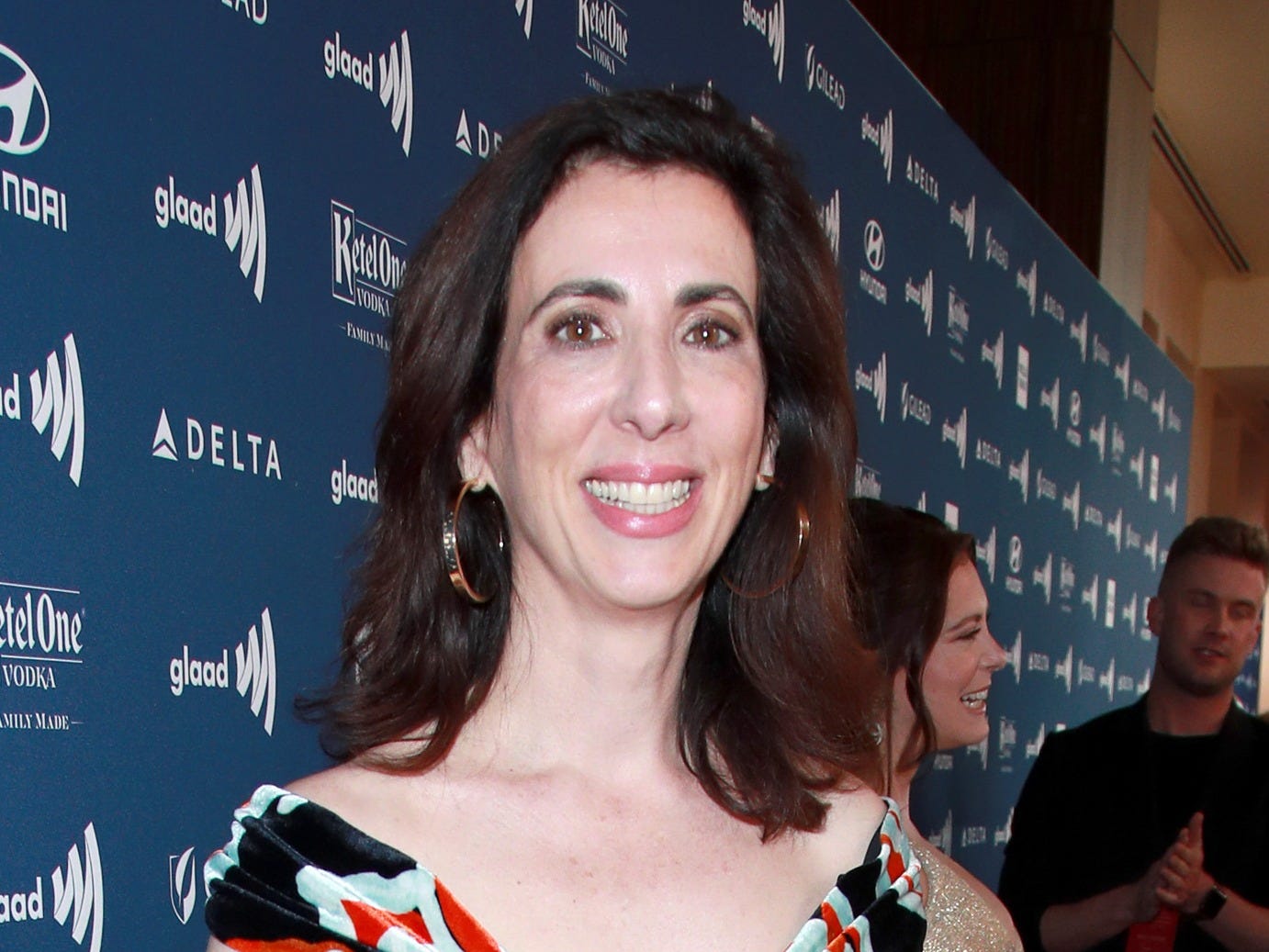 In May, Deadline reported that Witherspoon had signed on for two Netflix rom-coms. The first, “Your Place or Mine,” will star Witherspoon and will be the directorial debut of Aline Brosh McKenna (pictured), who wrote “The Devil Wears Prada” and co-created “Crazy Ex-Girlfriend.” The film “focuses on two long-distance best friends who change each other’s lives when she decides to pursue a lifelong dream and he volunteers to keep an eye on her teenage son.”

The second rom-com will be based on the 2019 Sarah Haywood novel “The Cactus,” which is about the story of a 45-year-old woman who has an unexpected pregnant that causes her to “rethink the structured life she has created for herself and leads her on an unconventional journey toward love, family and learning to embrace the unexpected,” Deadline reported.

Witherspoon is also set to star in and produce a Netflix sci-fi film, “Pyros.” 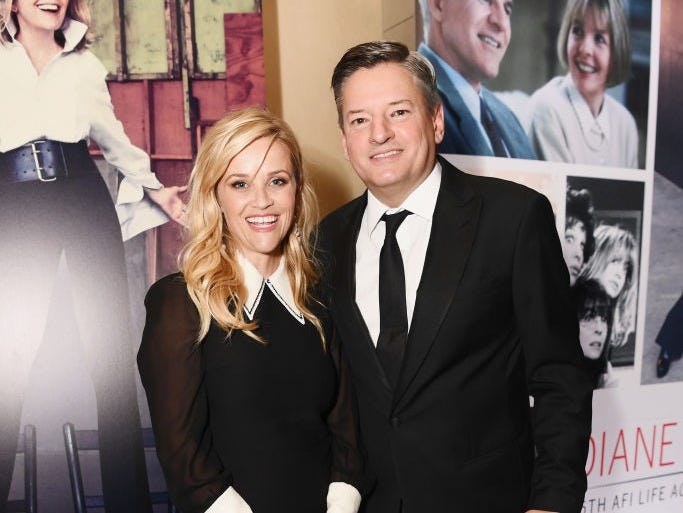 Deadline also reported the news that Netflix had acquired “Pyros” in August 2019. The film is based on the Thomas Pierce science fiction short story “Tardy Man,” which appeared in the New Yorker in August 2018. It’s about “a group of augmented people who are fitted with indestructible fire suits that are fused to their spines.”

The release dates for all three upcoming Netflix films are TBD.