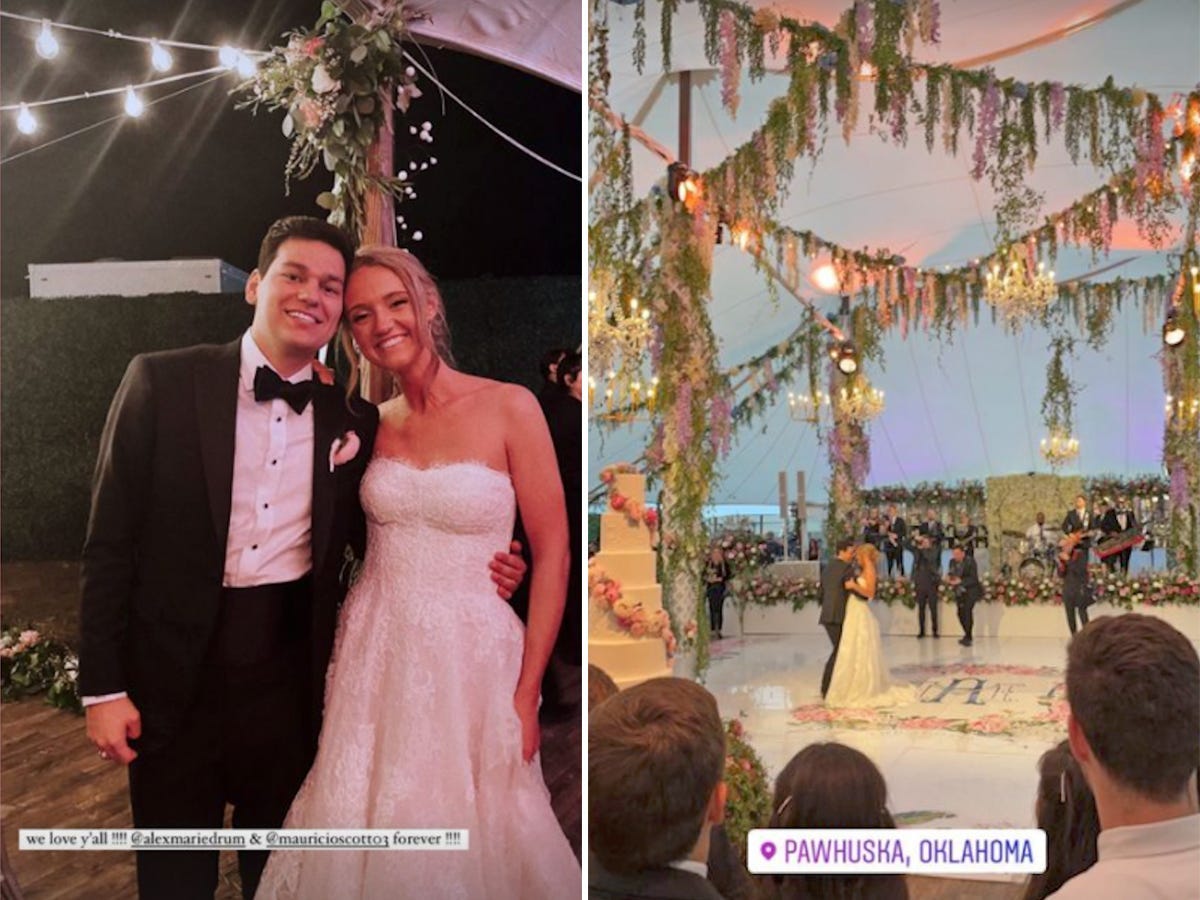 Ree Drummond is a household name thanks to her blog, The Pioneer Woman, and food network TV show of the same name.

But this weekend, all eyes were on her daughter, Alex Drummond, as she got married to Mauricio Scott.

Alex, 23, and Scott, 24, met at Texas A&M University as freshmen in 2015, as People reported. They got engaged in the summer of 2020, which Alex announced on Instagram.

The couple got married at the Drummond family’s ranch in Oklahoma, where Ree films “The Pioneer Woman,” as the mom of five documented on her blog.

Alex documented the wedding on her Instagram, sharing dozens of snapshots from the day on her stories. 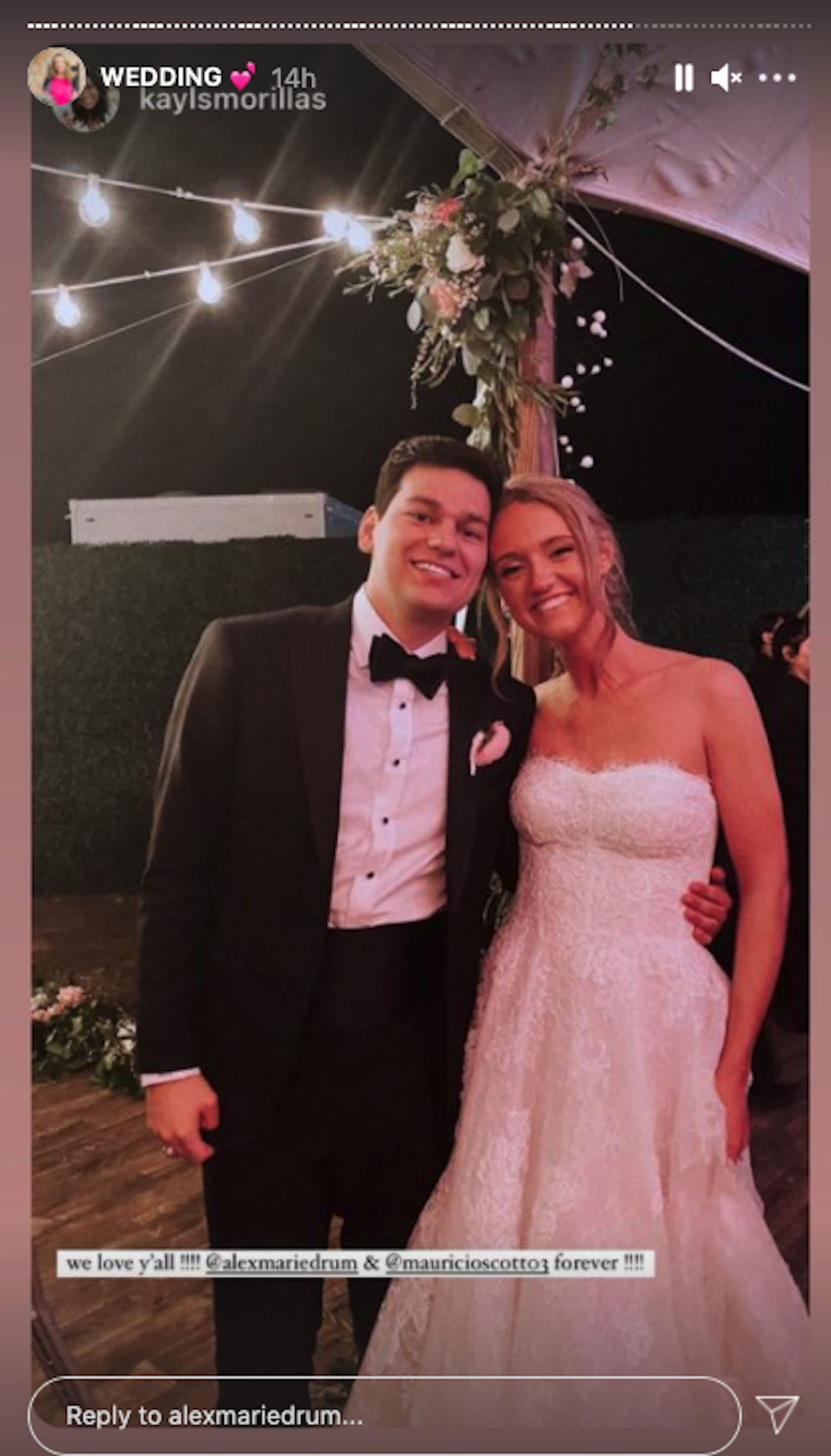 Instagram/@alexmariedrumThe couple got married at the Drummond family’s ranch.

The outdoor wedding was planned by Keely Thorne Event, and The Fleuriste provided decor and flowers.

Alex and Scott said their vows outside in front of chairs and a cross covered with flowers, while their ceremony took place under a tent.

The bride wore a strapless Monique Lhuillier gown while she said “I do.” 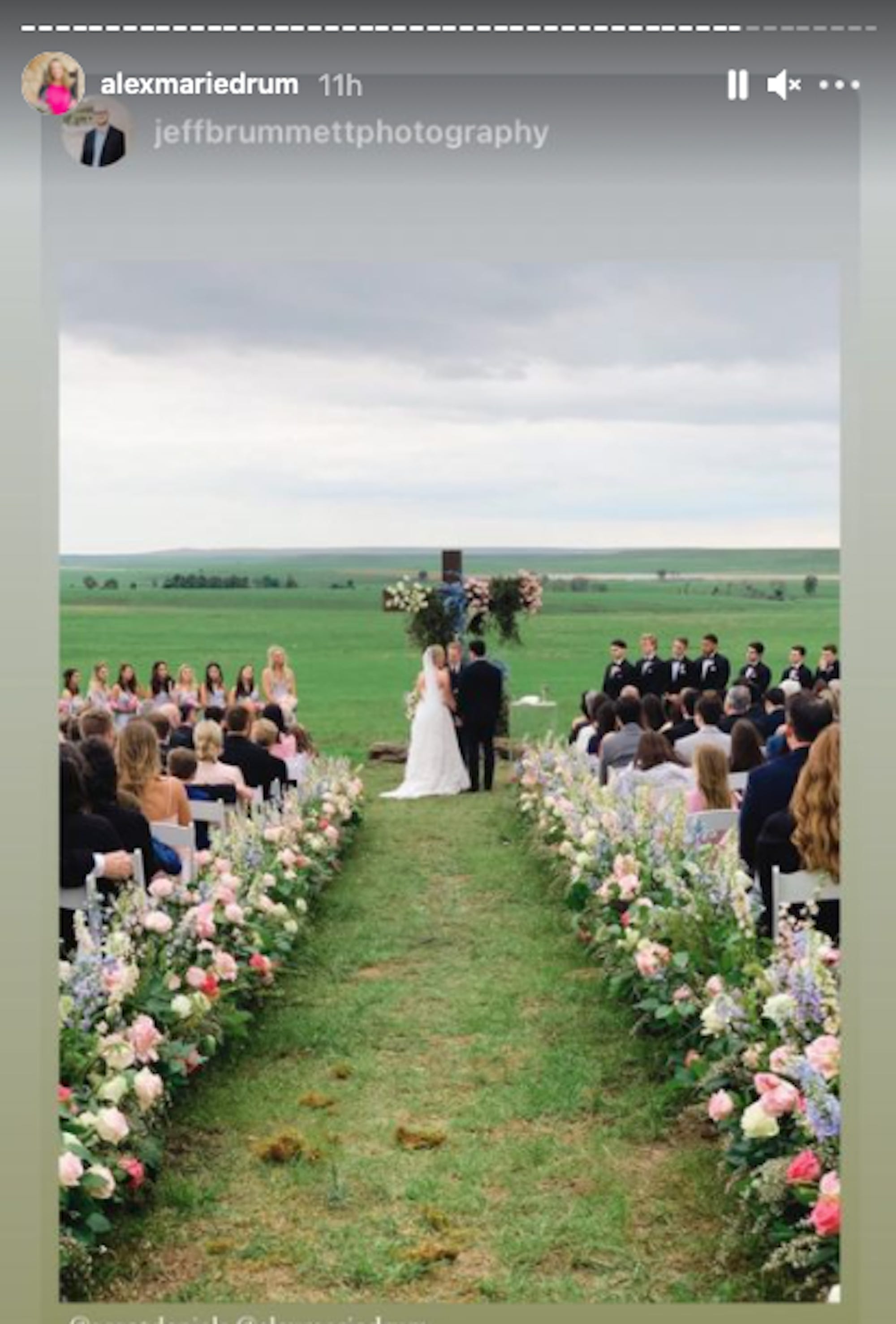 The tent was likewise adorned with flowers on both the inside and outside. There was also additional seating outside of the tent for people to sit on.

The lattices holding up the tent were covered with flowers, and the tables featured oversized centerpieces made of flowers.

The greenery created an ethereal and whimsical space. 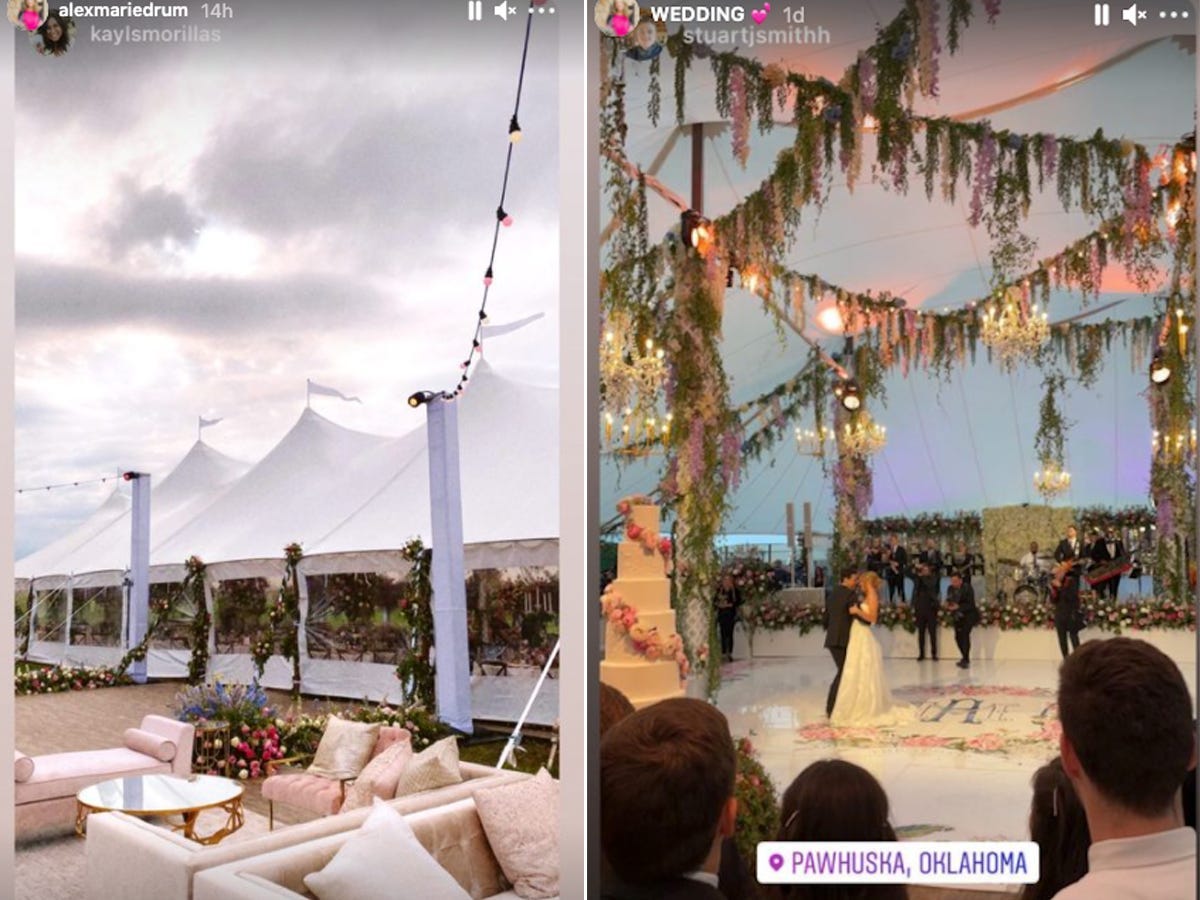 Instagram/@alexmariedrumThe reception was in a tent.

The dance floor was engraved with an intertwined ‘A’ and ‘M’ to honor the newlyweds.

The wedding was catered by Mercantile, Ree’s restaurant.

Ree detailed the menu on her blog, sharing that the event included a steak and shrimp duet and bacon mac and cheese.

Amy Cakes provided the couple’s six-tier cake, which coordinated with their floral decor. 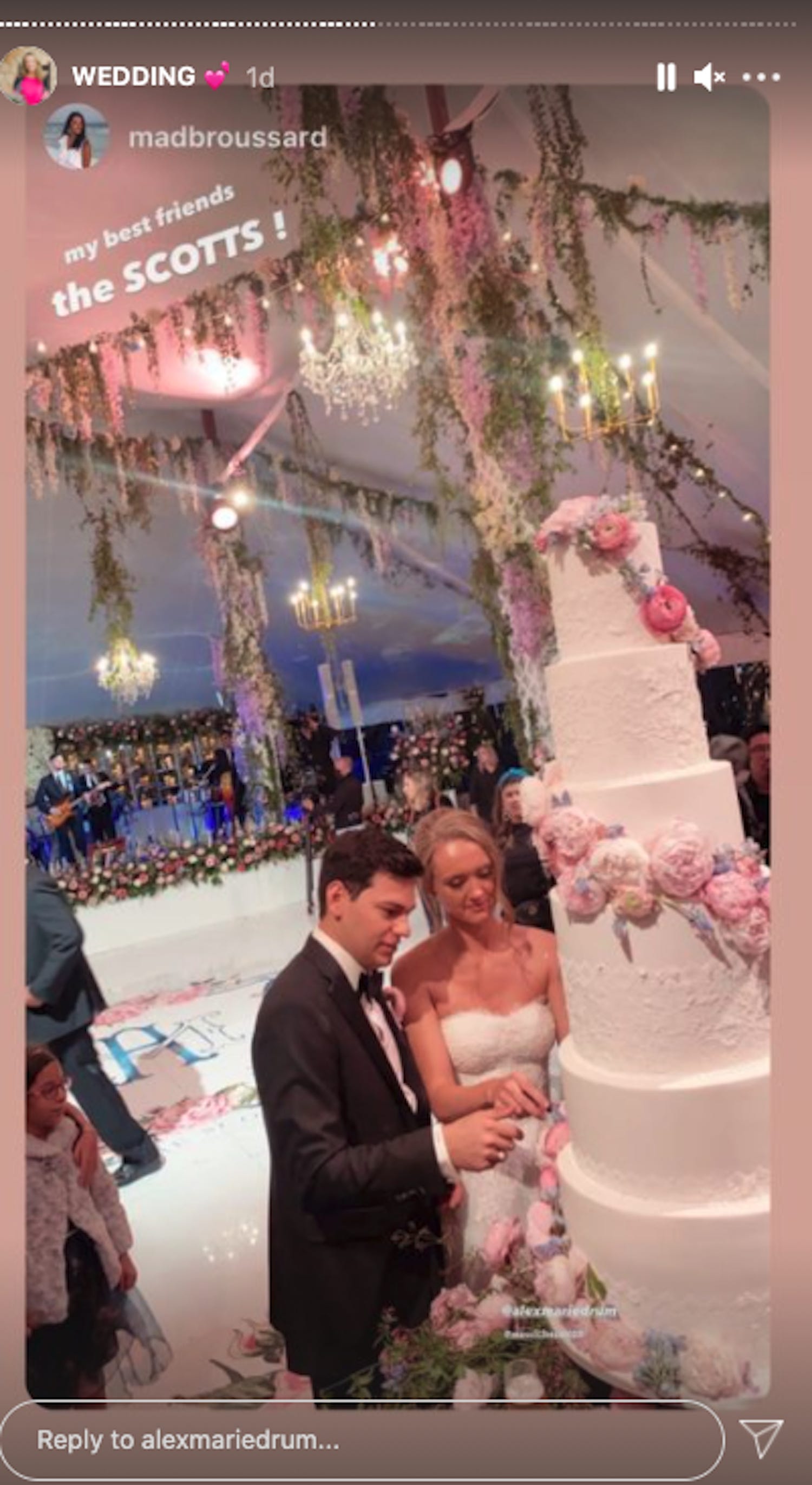 Instagram/@alexmariedrumThey had a six-tier cake.

The wedding also featured a visit from P-Town Pizza – another restaurant owned by Ree – which provided late-night snacks like pizza and wings for guests as they celebrated.

Grant Daniels photographed the wedding. You can read more about Alex and Scott’s special day here.