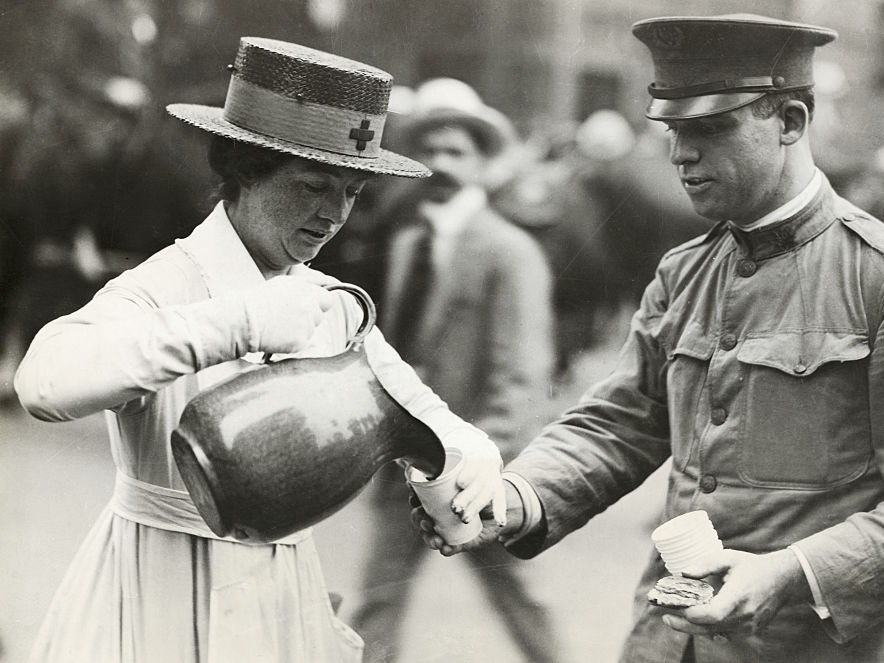 World Red Cross and Red Crescent Day is celebrated on May 8 each year to mark the birthday of Henry Dunant, founder of the International Committee of the Red Cross (ICRC) who received the Nobel Peace Prize in 1901 for his work.

Dunant co-founded the original Red Cross in his home country of Switzerland in 1863. Various other Red Cross societies began forming (including the American Red Cross in 1881), and the International Federation of Red Cross and Red Crescent Societies (IFRC) was founded in 1919 as a way to consolidate them all.

In honour of Dunant’s birthday, here are 20 vintage photos of Red Cross nurses doing what they do best: tending to those affected by war and disasters around the world. 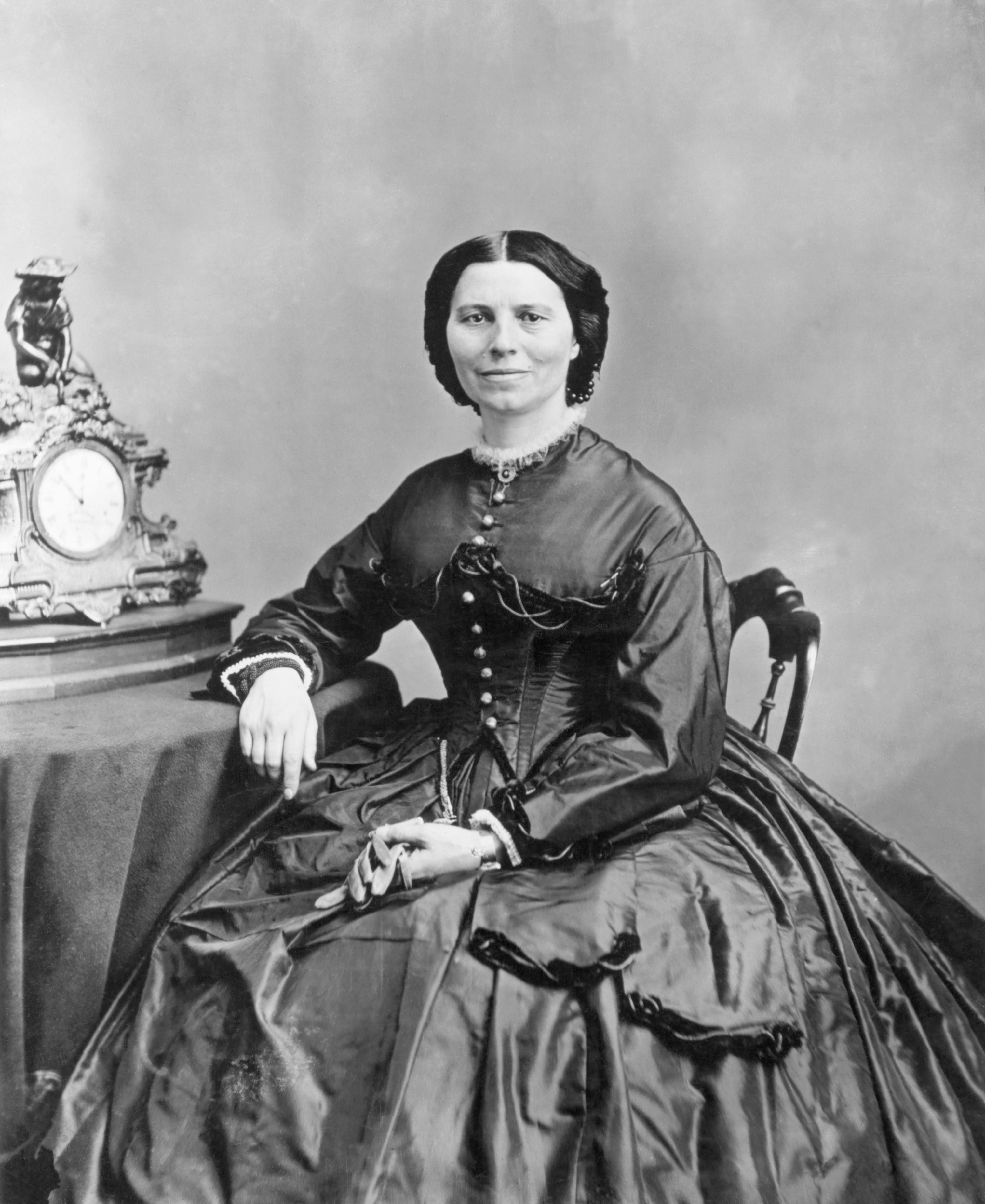 Bettman/Contributor/Getty ImagesClara Barton, under President Abraham Lincoln’s charge for sending supplies to civil war soldiers, holds a pair of gloves next to a table and clock.

During the Civil War, Barton became known as the “Angel of the Battlefield” for her work with the wounded. She founded the American Red Cross after encountering Henry Dunant’s International Committee of the Red Cross (ICRC) in Switzerland on a trip to Europe.

Barton served as president of the American Red Cross for 23 years.

In its early years, the Red Cross helped support soldiers in battle and communities in disasters. 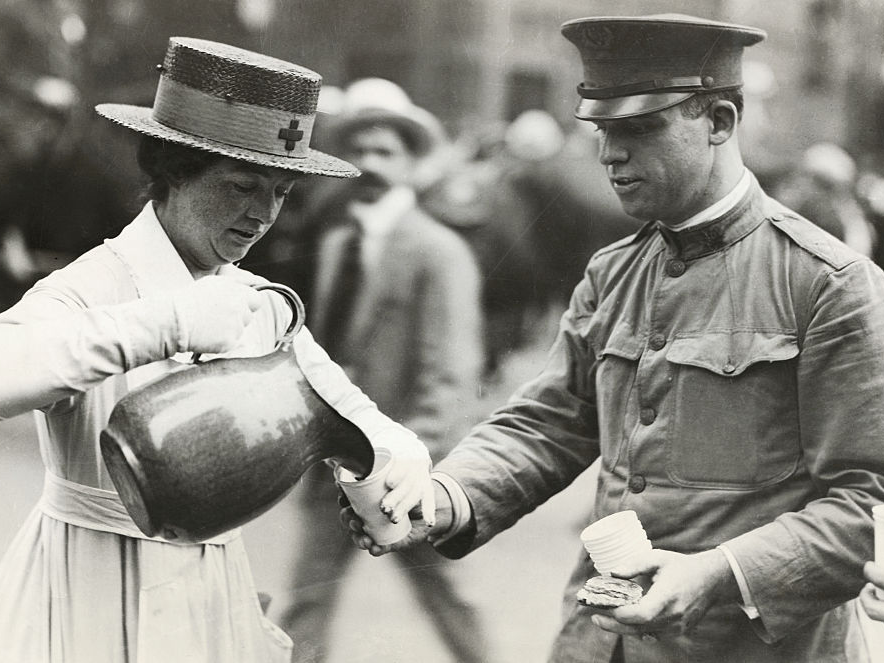 George Rinhart/Corbis via Getty ImagesA Red Cross nurse at a military parade circa 1900.

They worked to stop yellow fever outbreaks in Florida in 1888, helped flood victims in Pennsylvania in 1889, and aided the US military during the Spanish-American War in 1898.

The organisation received its first federal charter from Congress in 1900. 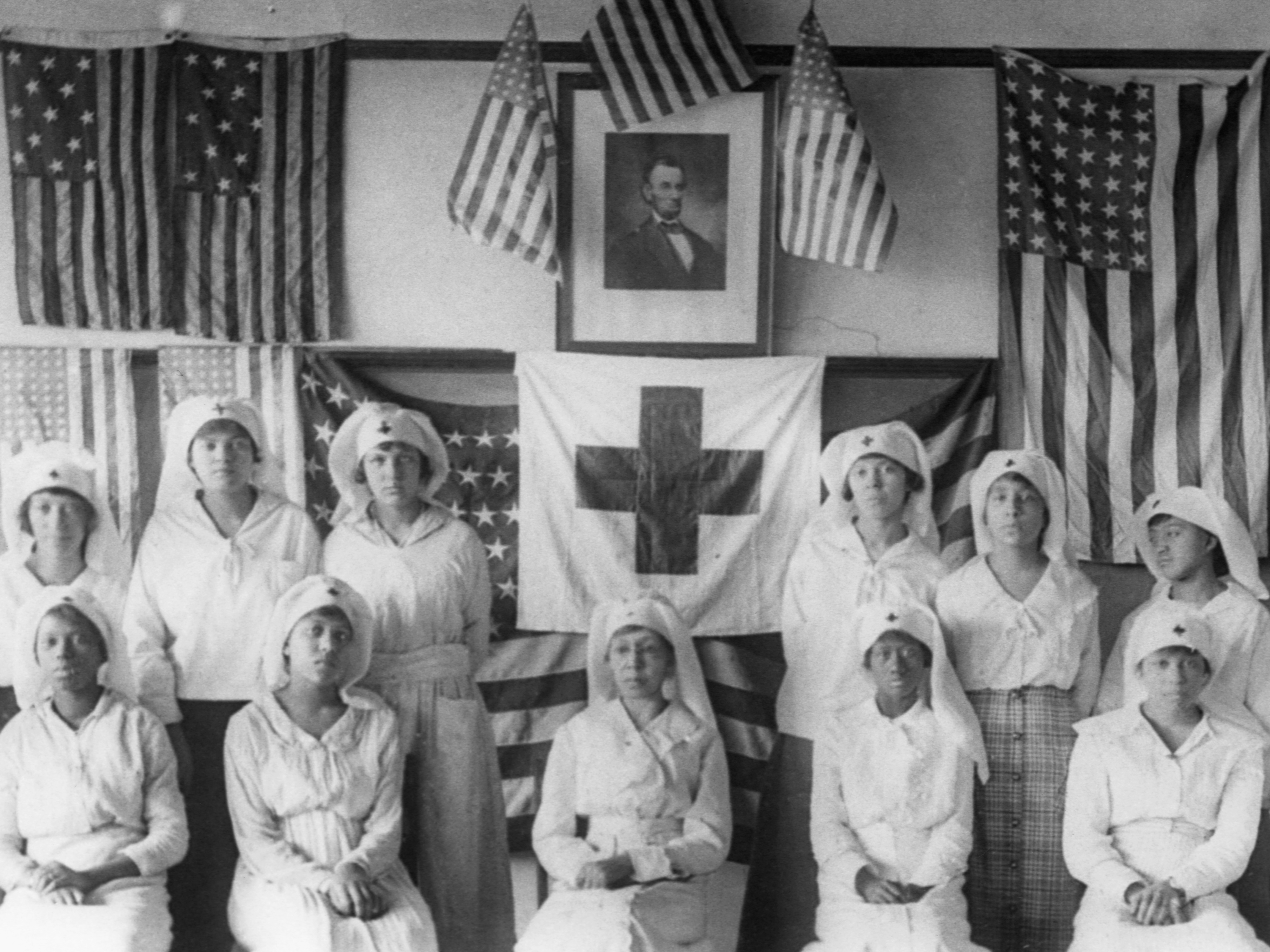 While it’s not a government entity, the American Red Cross is considered a “federal instrumentality” with responsibilities given to them by the government.

During World War I, nurses aided soldiers in the trenches.

Red Cross nurses tended to wounded Serbian soldiers on the Macedonian front during World War I.

The International Federation of Red Cross and Red Crescent Societies (IFRC) was founded in 1919 in Paris after World War I. 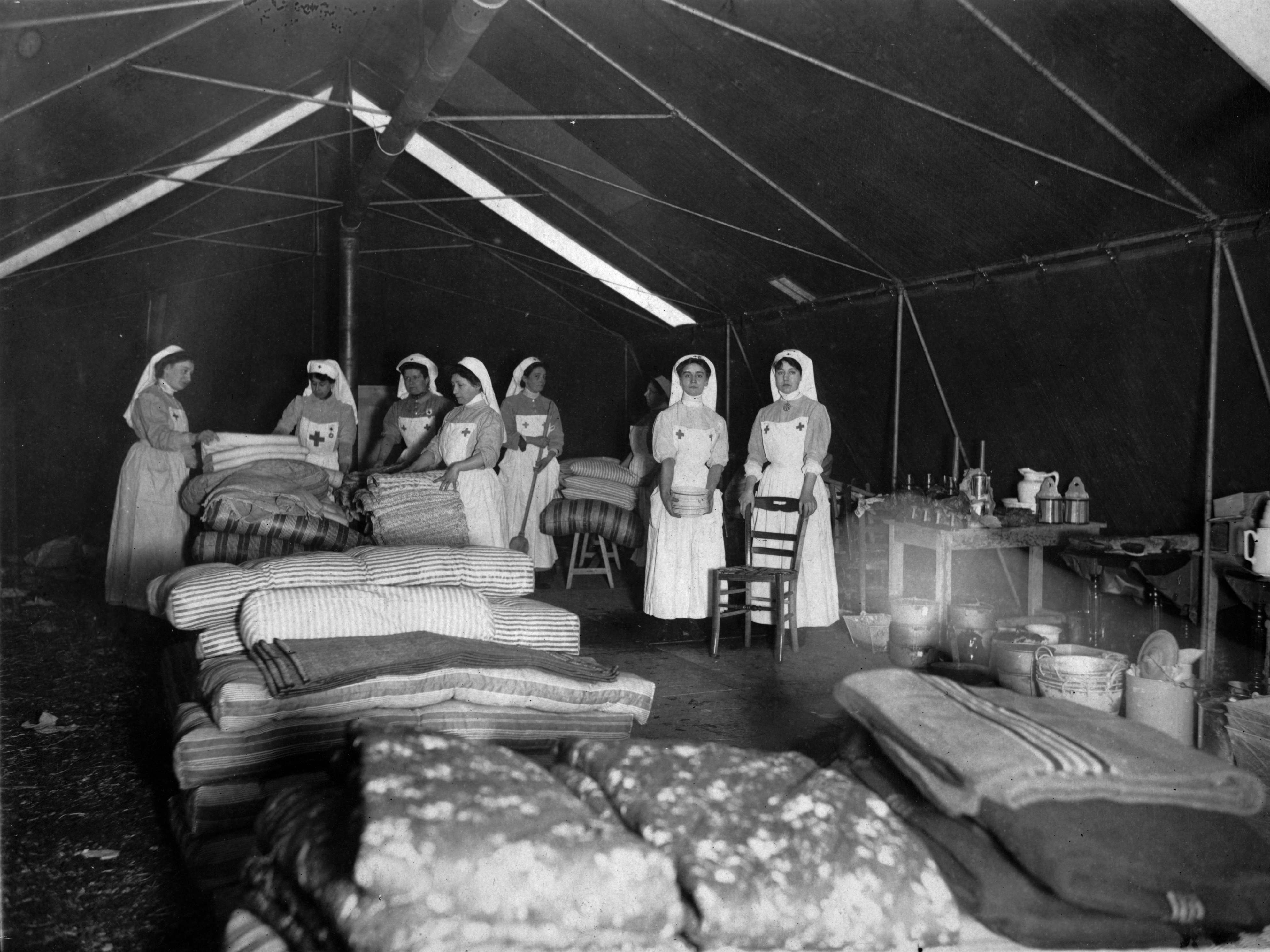 Roger Viollet Collection/Getty ImagesA temporary installation of the Red Cross in Paris around 1910.

The five founding countries of the IFRC were Britain, France, Italy, Japan, and the US. Their first order of business was to help people in countries affected by World War I recover.

Nurses from the British Red Cross Society were honoured by Queen Alexandra in 1913. The nurses received war badges for their work in the Balkan War. Popperfoto/Getty ImagesWounded British soldiers and their nurses in a hospital ward circa 1916. 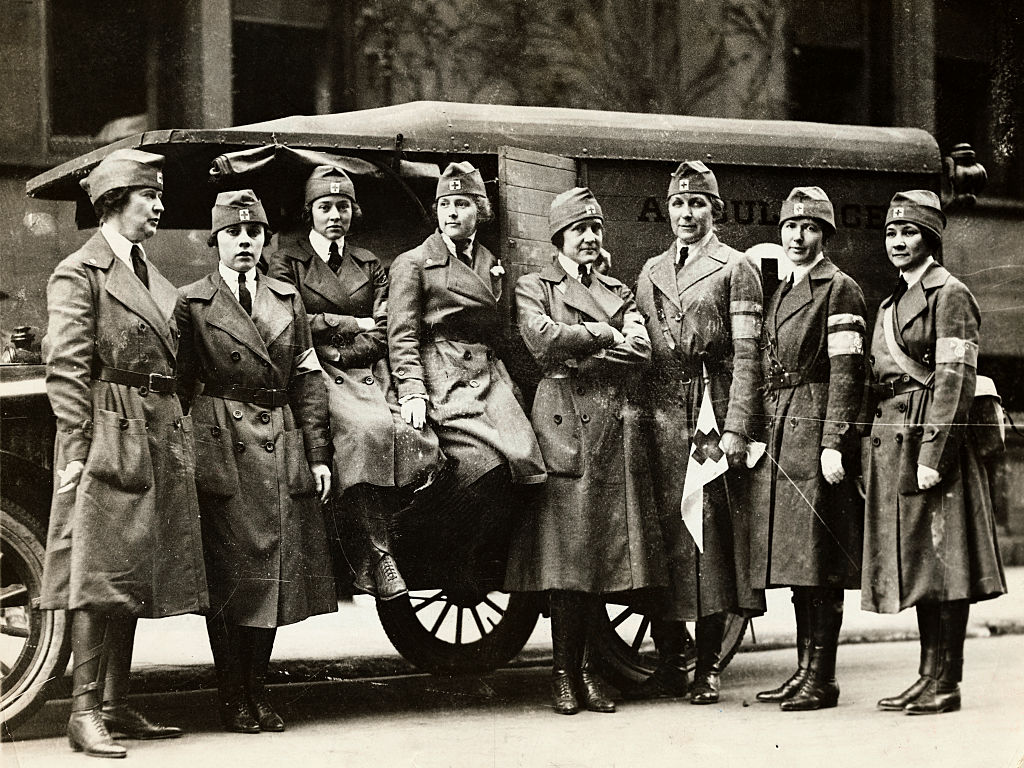 George Rinhart/Corbis via Getty ImagesWomen in war nurse uniforms, standing in front of an ambulance in 1917.

According to the National Women’s History Museum, the design of the uniforms was considered progressive and caused quite a stir. 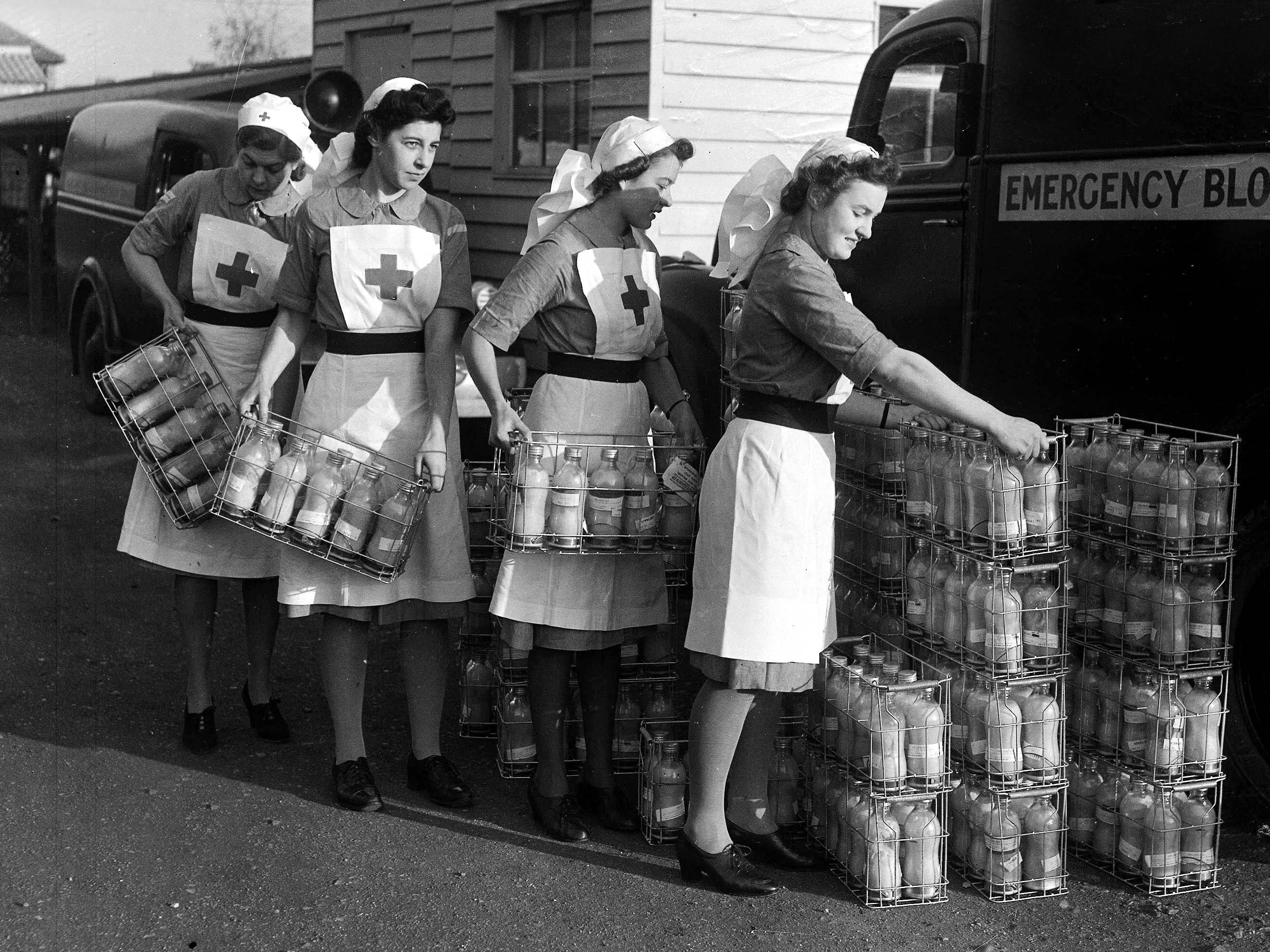 The supplies went to treat wounded soldiers of the First Army of North Africa during World War II. 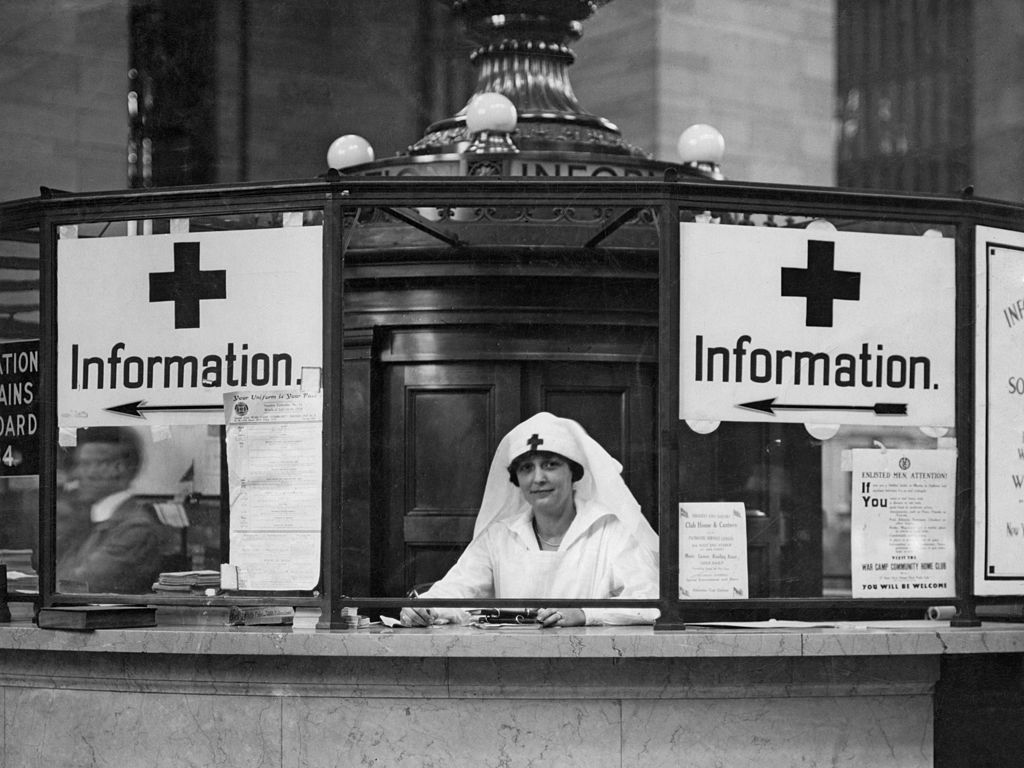 They worked to recruit more nurses. 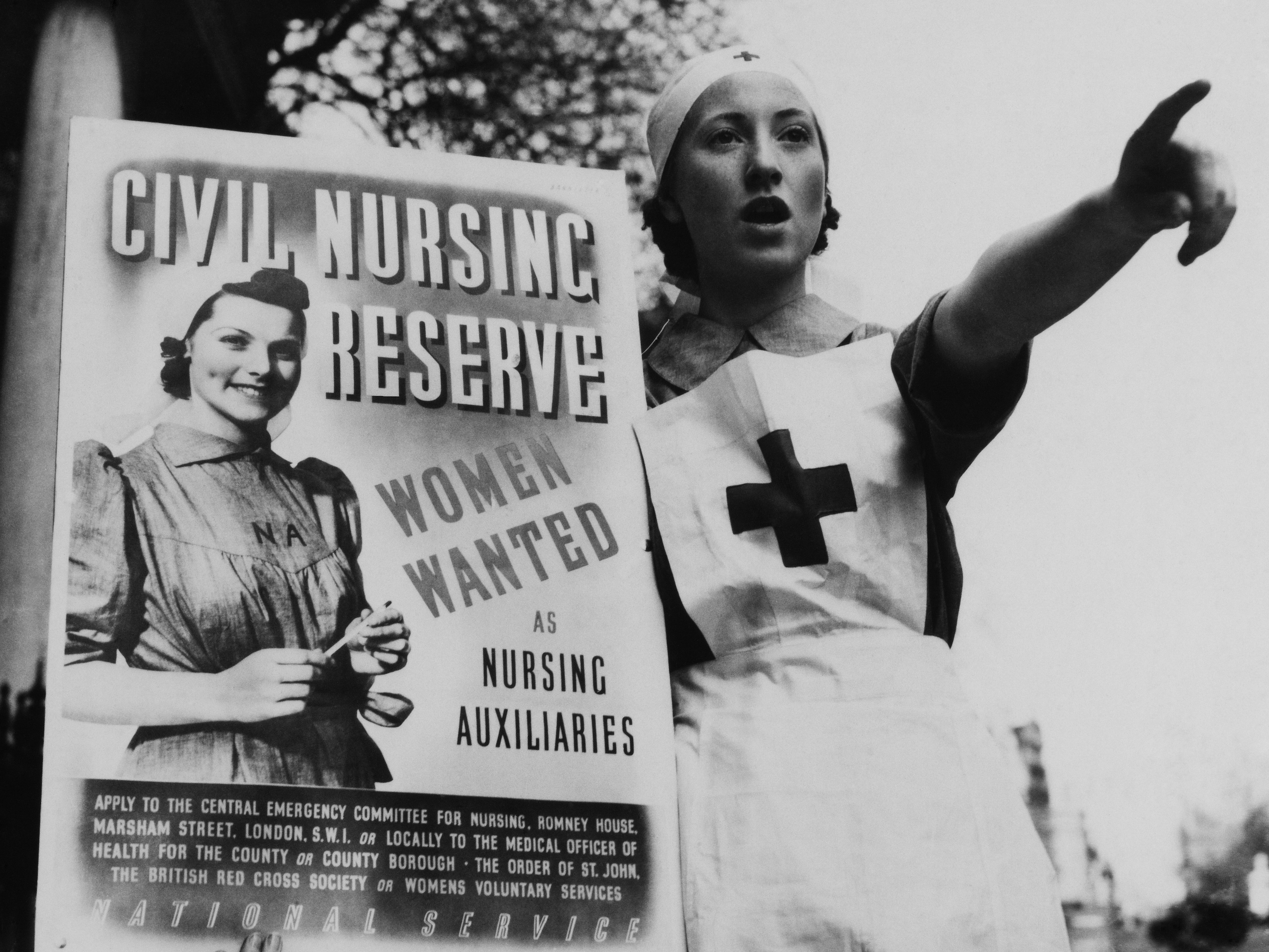 Keystone-France/Gamma-Keystone via Getty ImagesAn English nurse with a recruiting sign in 1939.

They worked in radio centres. 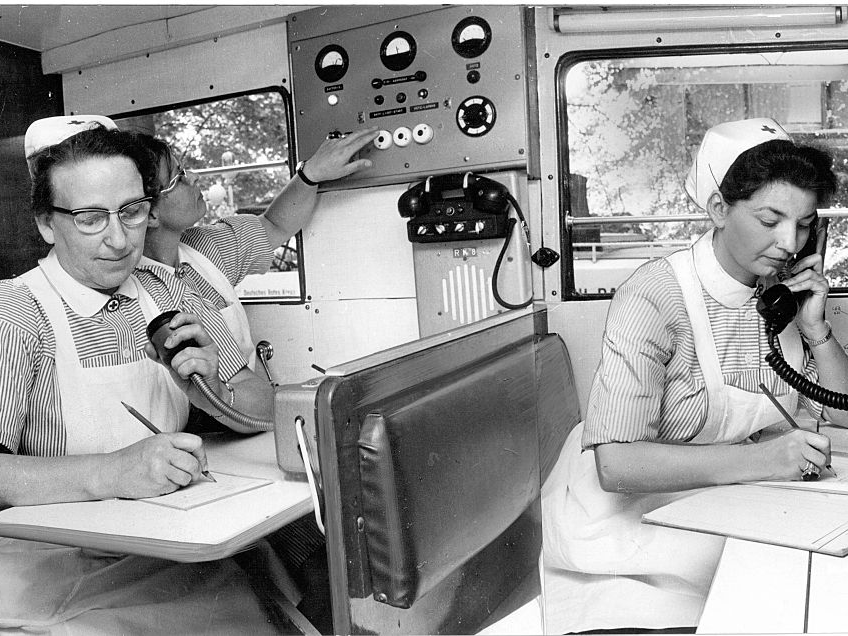 Hilde/ullstein bild via Getty ImagesRed Cross nurses in Berlin in 1966.

Red Cross nurses worked in a mobile radio centre in Berlin in 1966.

They knitted warm clothes for soldiers. 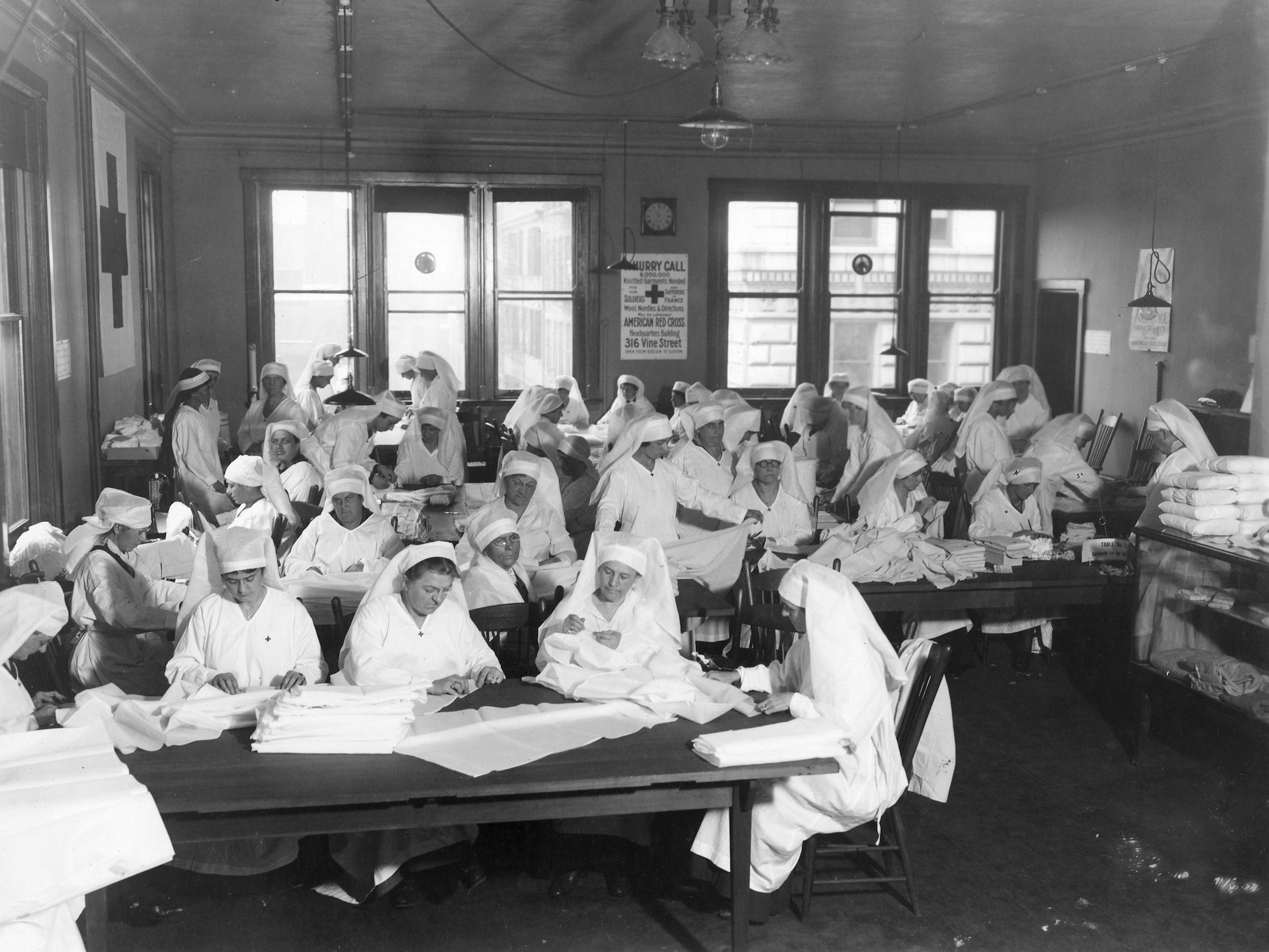 The Red Cross even had a book of knitting patterns for nurses.

They sewed dresses for refugee relief. 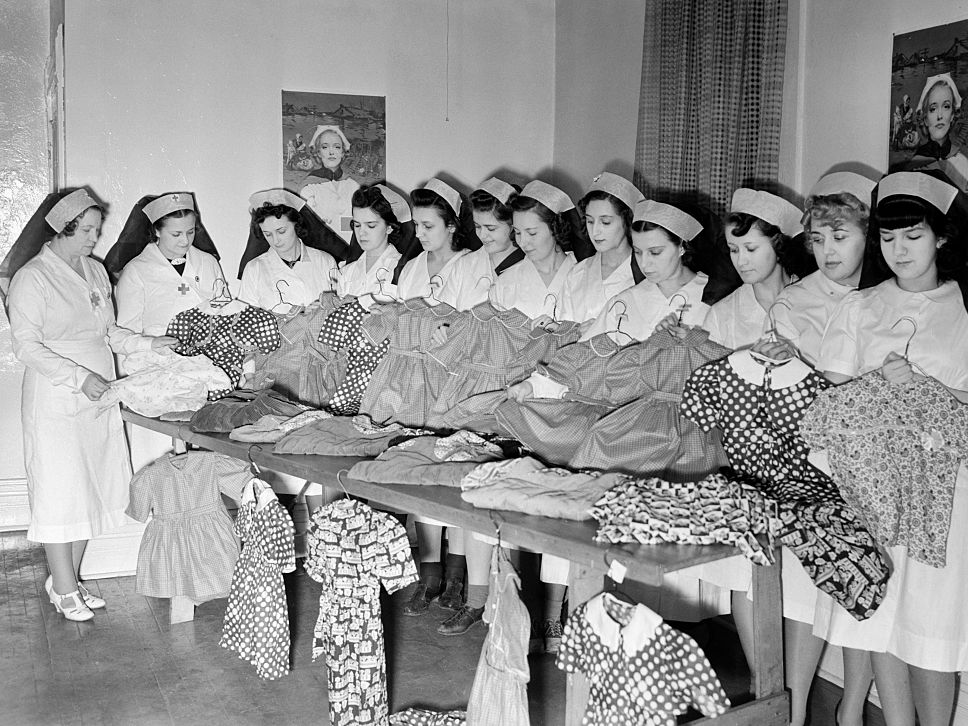 Sewing clothes for soldiers and those affected by the war also became a children’s after-school activity.

They made sure children received medicine and nourishment. Red Cross nurses were concerned with public health as well as soldiers’ health.

They took care of animals, too. 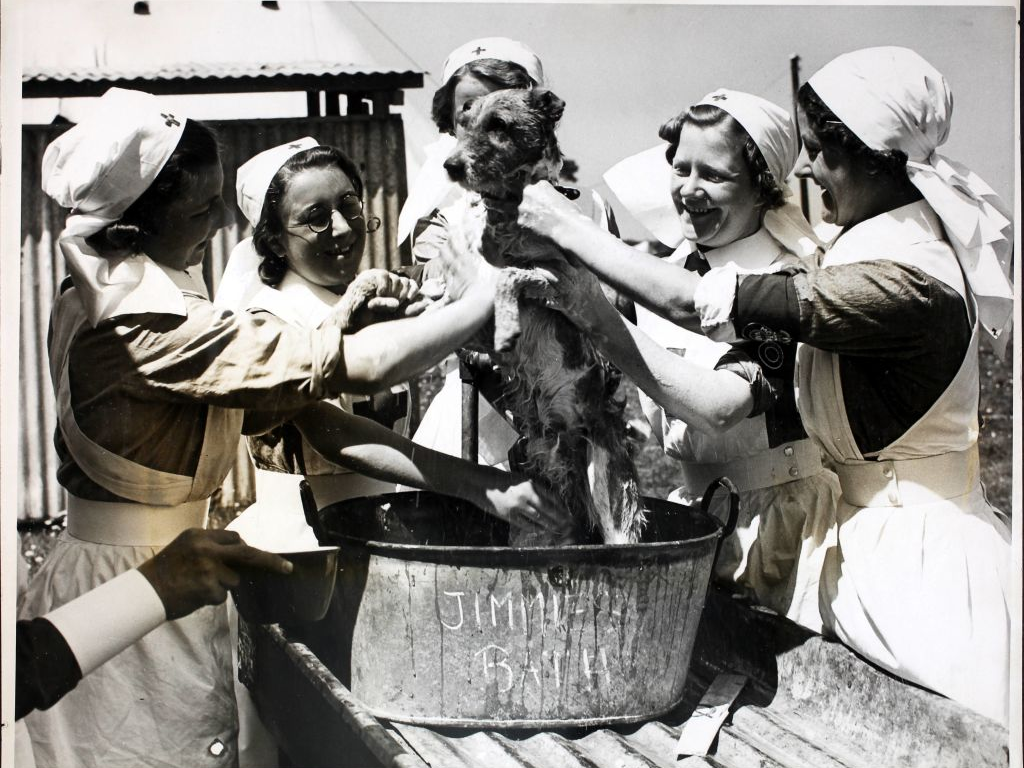 They gave Jim the terrier a good wash at a military hospital in England.

And participated in the occasional beauty pageant. 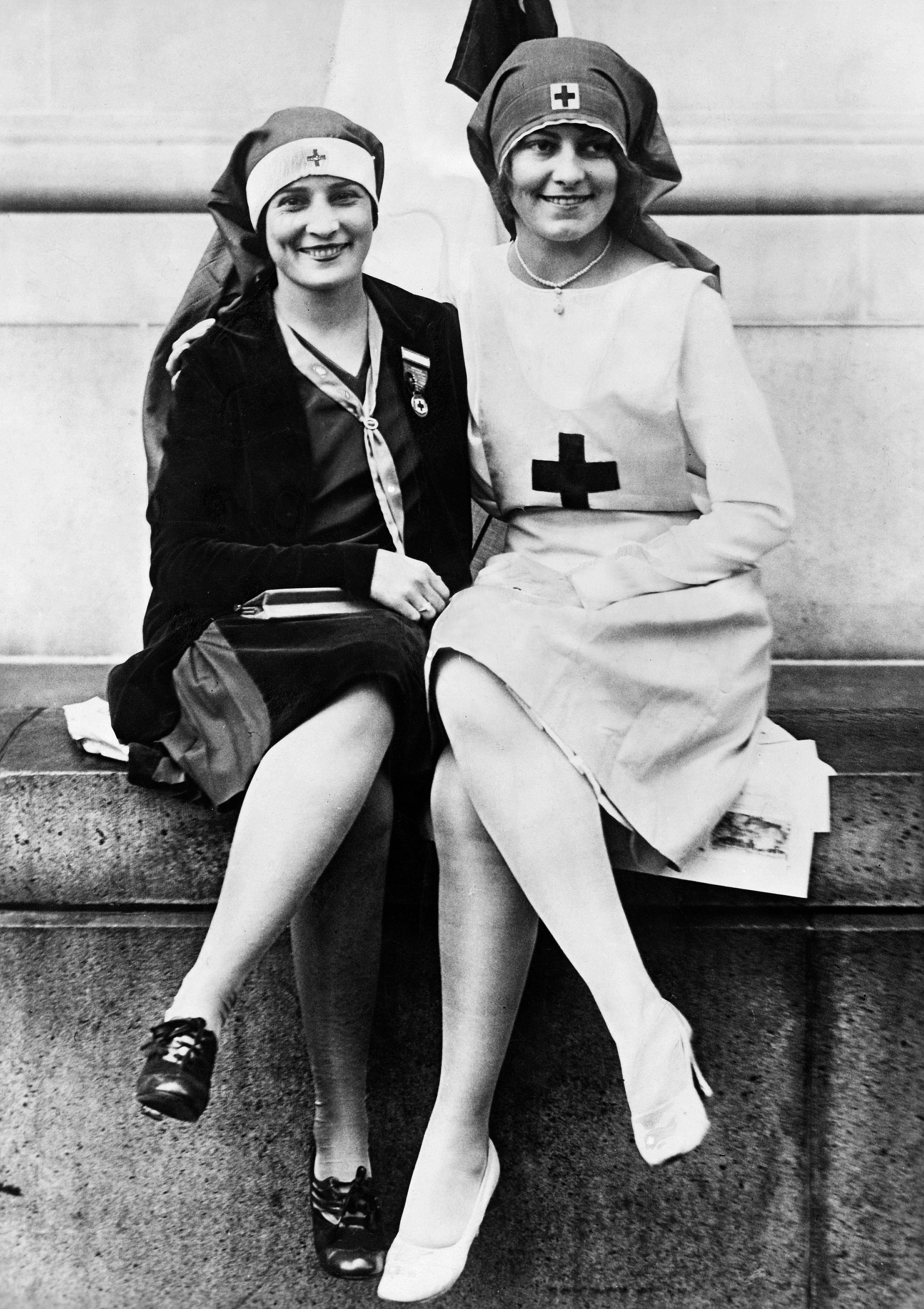 The Red Cross had a beauty pageant in New York City in 1929. 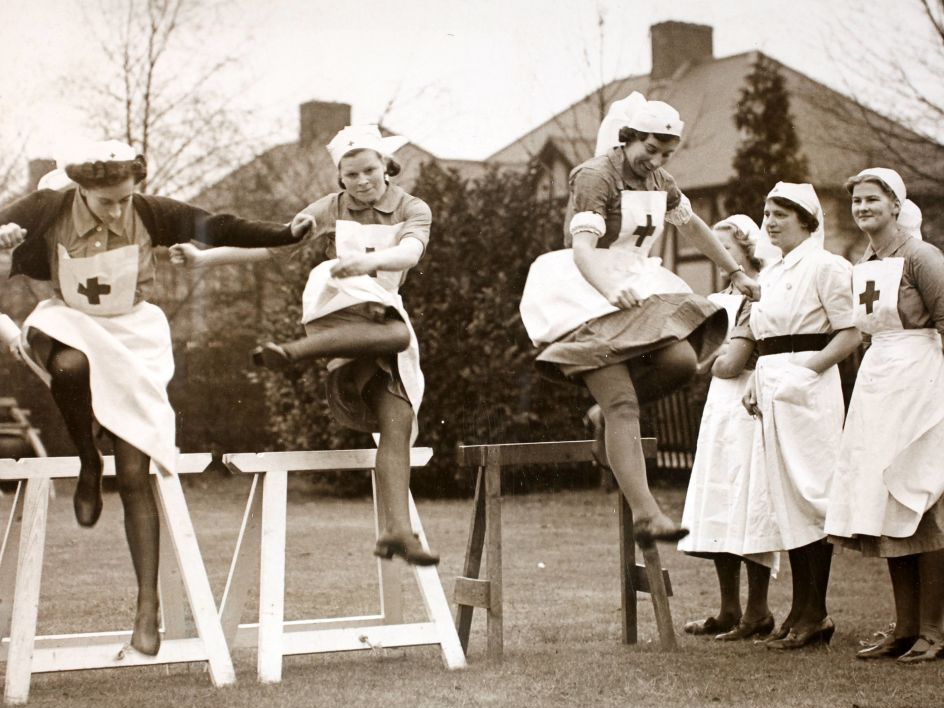 Red Cross nurses in London practiced jumping over hurdles to stay in shape while wearing their uniform skirts, aprons, and shoes.

Red Cross nurses had different uniforms over the years. 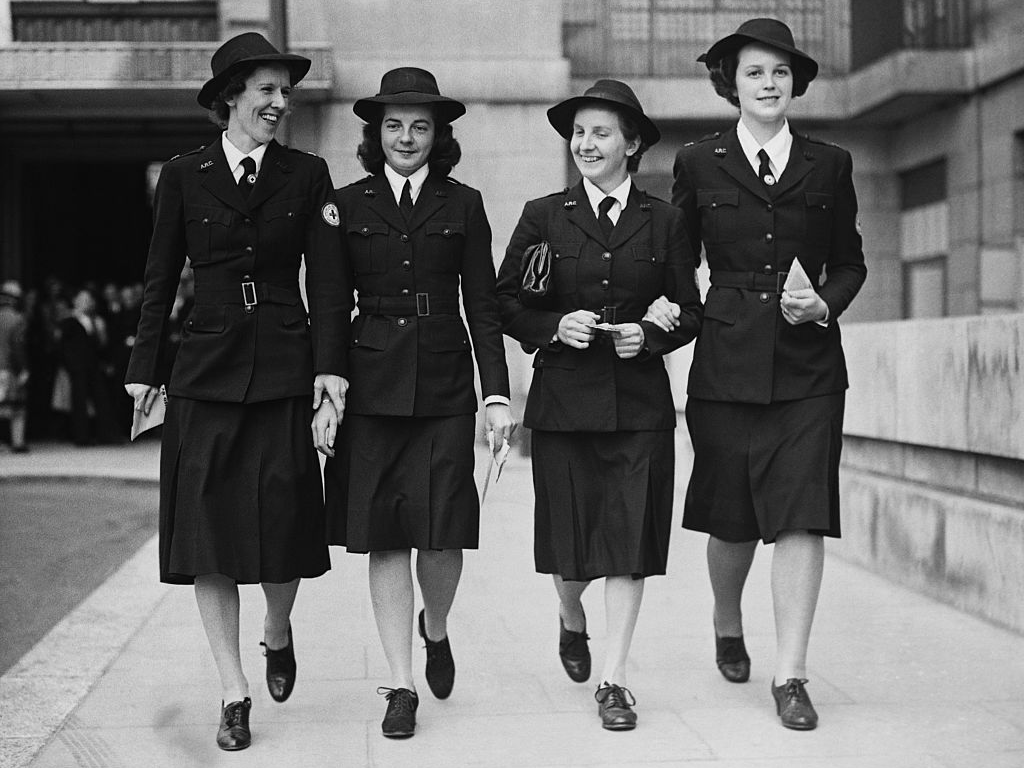 A rare colour photo from around 1943 shows the Red Cross uniform in colour. 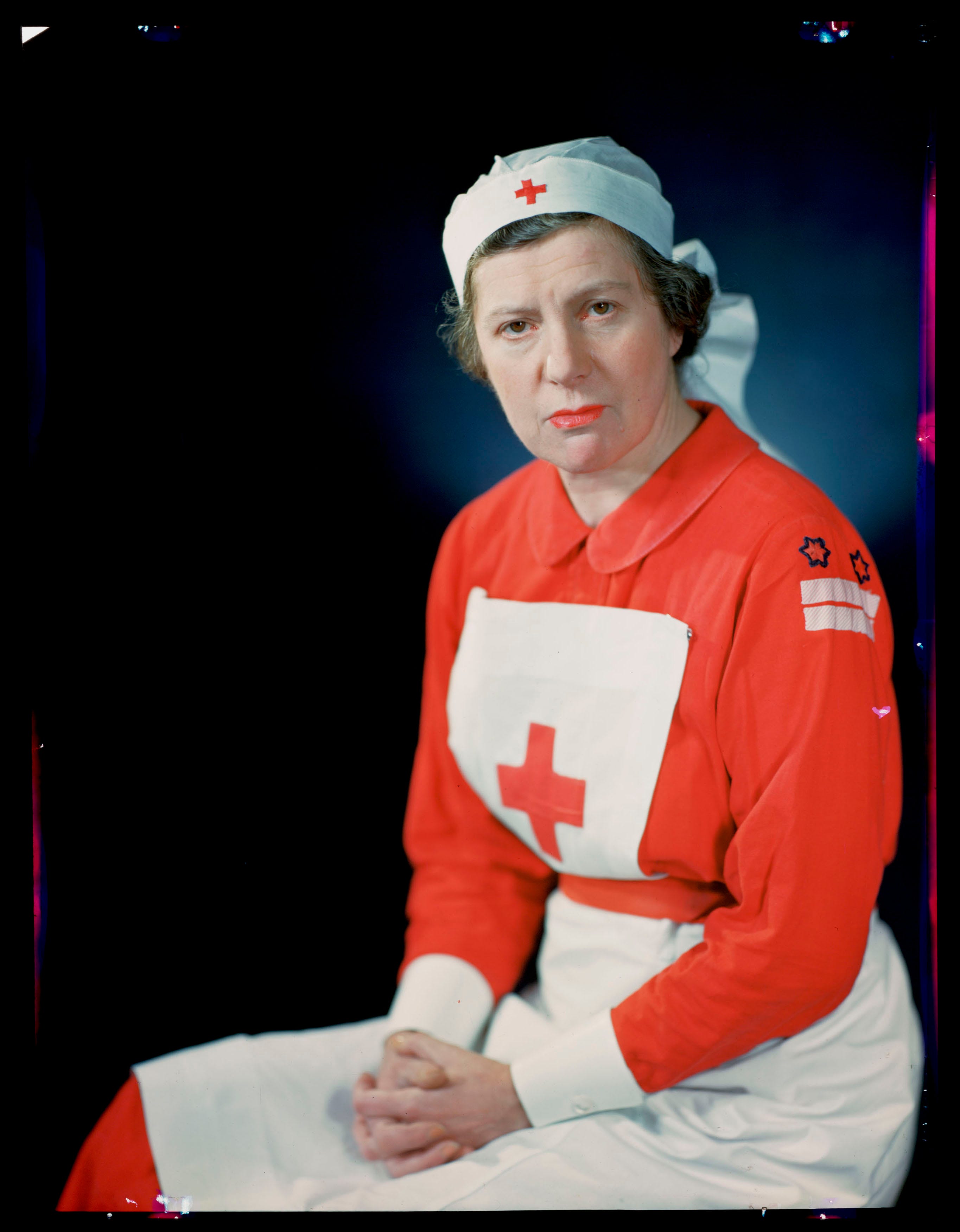 SSPL/Getty ImagesA Kodachrome colour photograph of Claude Elliott dressed in the uniform of a Women’s Voluntary Service nurse circa 1943.

Kodachrome was one of the first modern colour photography processes, introduced in 1935.

During the Korean War, nurses at the Denver Red Cross ran blood banks.

The Denver Red Cross organised blood drives for soldiers fighting during the Korean War in the 1950s.

The Red Cross is still a vital resource for people in need across the world. 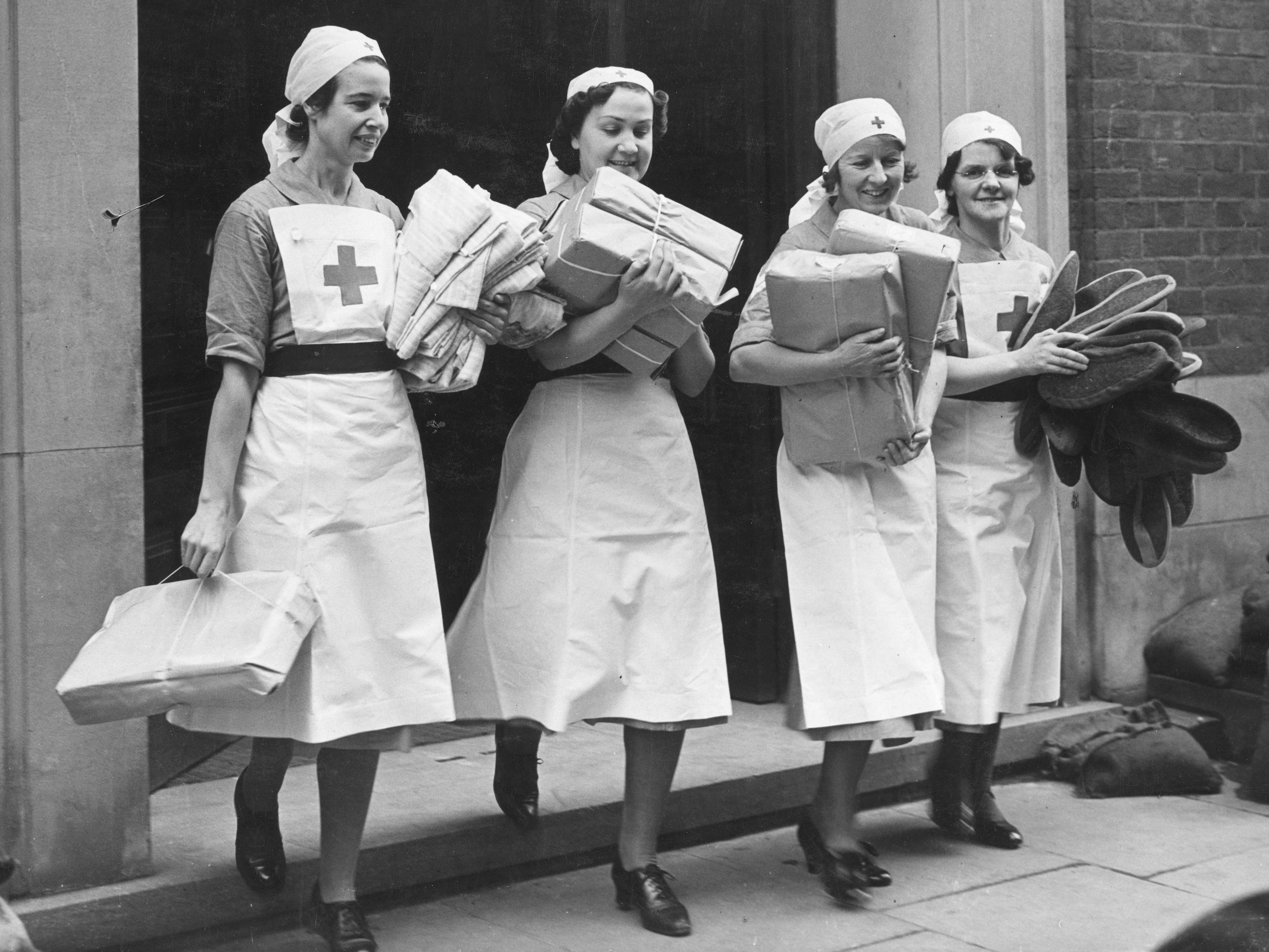 Arthur Tanner/Fox Photos/Getty ImagesBritish Red Cross nurses carrying gifts from the US in 1941.

Today, the American Red Cross provides about 40% of the blood supply in the US, according to the organisation, teaches safety courses, and helps in the aftermath of disasters.

They continue to offer training and support during the coronavirus outbreak, as well as refuge to people in need.