Whether you have a dog, cat, bird, or anything in between, pet ownership can be an adventure.

A furry friend can also keep you company through the stress or isolation of the coronavirus pandemic – this may be why pet adoption and fostering have spiked recently.

While people who adopt an animal usually think they’re changing its life for the better, pets have just as much of a positive impact on the lives of their owners. If you’re still on the fence about whether or not you should adopt a pet, here are 15 reasons why you need one in your life.

Having a pet can improve your mood. Owning a pet can help reduce stress you’re feeling amid the pandemic. According to studies, spending time with your pet can trigger an increased level of oxytocin, also known as the “love hormone.” This is responsible for the feeling of closeness and increased bonding with your pet. It can also increase your overall mood. The Asahi Shimbun/Getty ImagesA group of cats crowded together.

Your pet could be the perfect conversation starter for your next Zoom call, but owning a pet could also help you make more friends once social distancing guidelines lift.

Dogs are naturally curious about their environment, including other dogs and people, and they can be the catalyst for social interactions. If you own a dog, you might find strangers approaching you to ask about them.

But other pets like cats can increase your social circle as well. According to a 2015 study conducted in Australia and the US, pet owners were significantly more likely to get to know people in their neighbourhood than those who did not own a pet.

If you’re looking for love, a pet can help with that, too. Pets can be a great way to increase your chances of finding love. According to a survey by Purina, 54 per cent of surveyed pet owners said their pets helped them start a conversation with someone they were interested in. Nearly two thirds of people said they were likely to date someone who owned a pet, and one in three would want to meet someone who has pictures of their pet in their online dating profile.

And if you’re in a relationship, a pet can make you both happier and less stressed. SAM YEH/Getty ImagesThese dogs are ready for a wedding.

According to research cited by Psychology Today, couples who own a pet together have lower blood pressure and are happier on average than their peers. They also interact more with each other than couples who don’t own a pet.

Owning a pet can make you a better person. According to a study by BarkBox, owning a dog can make you a better person (or at least make you think you are!). Of those surveyed for the study, 93% of pet owners said they could easily name at least one way their pet had made them a better person, including making them noticeably more patient or affectionate.

Bringing your pet to work can boost your morale and help control your stress levels. Showing off your pet can brighten those work-from-home video meetings, not only for yourself but also for your co-workers.

A 2012 study conducted at a North Carolina manufacturing company found that employees who brought their dogs to the workplace experienced lower stress levels throughout the day, reported being happier in their jobs, and had a higher opinion of their employer.

Pets can also help you unwind after a long day at work. Pets can give you comfort and a sense of relief. A 2003 study found the act of petting an animal after a stressful situation reduced feelings of anxiety. “The anxiety-reducing effect applied to people with different attitudes towards animals and was not restricted to animal lovers,” the study noted.

Having a pet nearby, especially a dog, can make you feel more secure. Large dog breeds like German shepherds and Rottweilers make for great deterrents from outside threats, allowing their owners to feel safer. The popularity of Rottweilers has risen in recent years thanks to “their loyalty, confidence and protective instincts.“

You always have someone to snuggle with on cold nights. While pets may disturb their sleep at times, some owners enjoy the comfort of curling up with their pet close by. They can make you feel at peace as you drift off to sleep.

Whether it’s taking them for a walk or doing yoga, pets can make you more physically active. 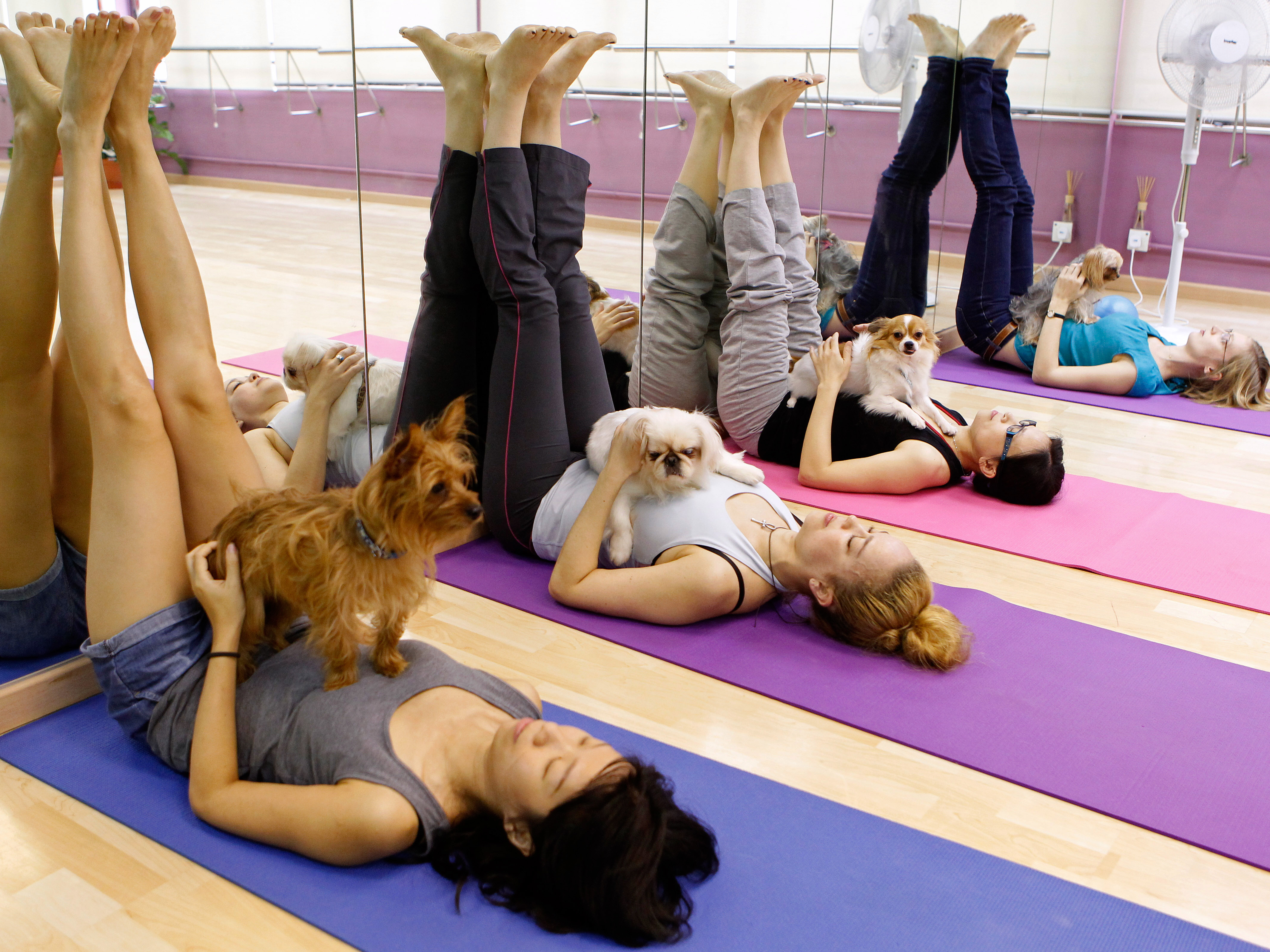 AFP/Getty ImagesA group does yoga with their dogs.

Dubbed the “Lassie effect,” taking your dog for a walk also makes you more physically fit and increases the chance you’re going to get your daily exercise.

You’ll find immeasurable joy in playing fetch with your dog, or teaching your pet tricks. Almost every dog owner knows the joy of playing fetch with them on a nice summer day. You can teach your dog to shake hands, roll over, and bark on command, but dogs aren’t the only ones that can be taught tricks. Cats can also be trained to sit and high five on command.

While they’re not as fluffy as cats or dogs, birds like parrots can be life-long companions. Birds are social creatures and love to play games and perform tricks. But unlike other animals, parrots and other birds have the ability to learn and mimic human speech. They also have life spans on par with a human’s, with some parrots living to be over 100, meaning you’ll have a friend for life.

Owning a pet can help your child’s learning. Having a pet at an early age can boost a child’s confidence and empathy levels, according to Blue Cross. Pets are natural listeners, and your child may feel more comfortable practicing their reading skills aloud in front of a pet than another person.

A pet can also teach your child about responsibility. According to a national survey by the American Pet Product Association, 58 per cent of pet owners said their animals help teach their children to be responsible. From an early age, a child can help feed, walk, and bathe a family pet.

Pets can also be the inspiration for great creative works. Pets inspire people in various of ways. English actor Oliver Reed reviewed his movie script with his cat, Felix, nearby. When he was coming up with his theories, Albert Einstein would often watch his cat, Tiger, move about. It was an injured dog that inspired Florence Nightingale to become a nurse.