Malcolm Hart, Proceedings of the Geologists’ AssociationA close-up image showing the damaged head and body of an ancient fish, Dorsetichthys bechei, with the arms of the prehistoric squid ancestor, Clarkeiteuthis montefiorei, clamped around it.

About 200 million years ago, a brutal underwater attack took place in the Atlantic. A squid-like creature, armed with 10 tentacles studded with hooks, swam up to a prehistoric fish. The predator wrapped its long arms around the fish’s head and crushed its skull.

The cephalopod was looking for a quick, delicious bite, but the meal cost the creature its life. Predator and prey died in a deadly embrace, and their interlocked bodies were fossilized under the waves.

A new study analysing that fossil, which has been accepted for publication in Proceedings of the Geologists’ Association, suggests this is the oldest evidence of such a squid attack ever found.

Malcolm Hart, a paleontologist at the University of Plymouth and the study’s lead author, said fossils depicting one animal preying on another are exceedingly rare.

“It points to a particularly violent attack, which ultimately appears to have caused the death, and subsequent preservation, of both animals,” he said in a press release.

The oldest squid-attack fossil ever found

Although the fossil was originally discovered in the 19th century off the southern coast of the UK, Hart decided to reexamine it after recently seeing it on display in a British museum. He wanted to know precisely what was going on in the ancient rock tableau and when it had happened.

Hart and his colleagues determined that the predator in question was a coleoid, a type of squid ancestor, named Clarkeiteuthis montefiorei. The 16-inch-long cephalopod chomped down on an 8-inch-long fish called Dorsetichthys bechei.

The researchers said the fossilized position of the squid’s arms – ensnaring the fish’s head and body – suggests that the two animals died together, rather than perishing separately and then being preserved together.

This isn’t the first coleoid fossil found in the UK, according to Hart, but it is the oldest. 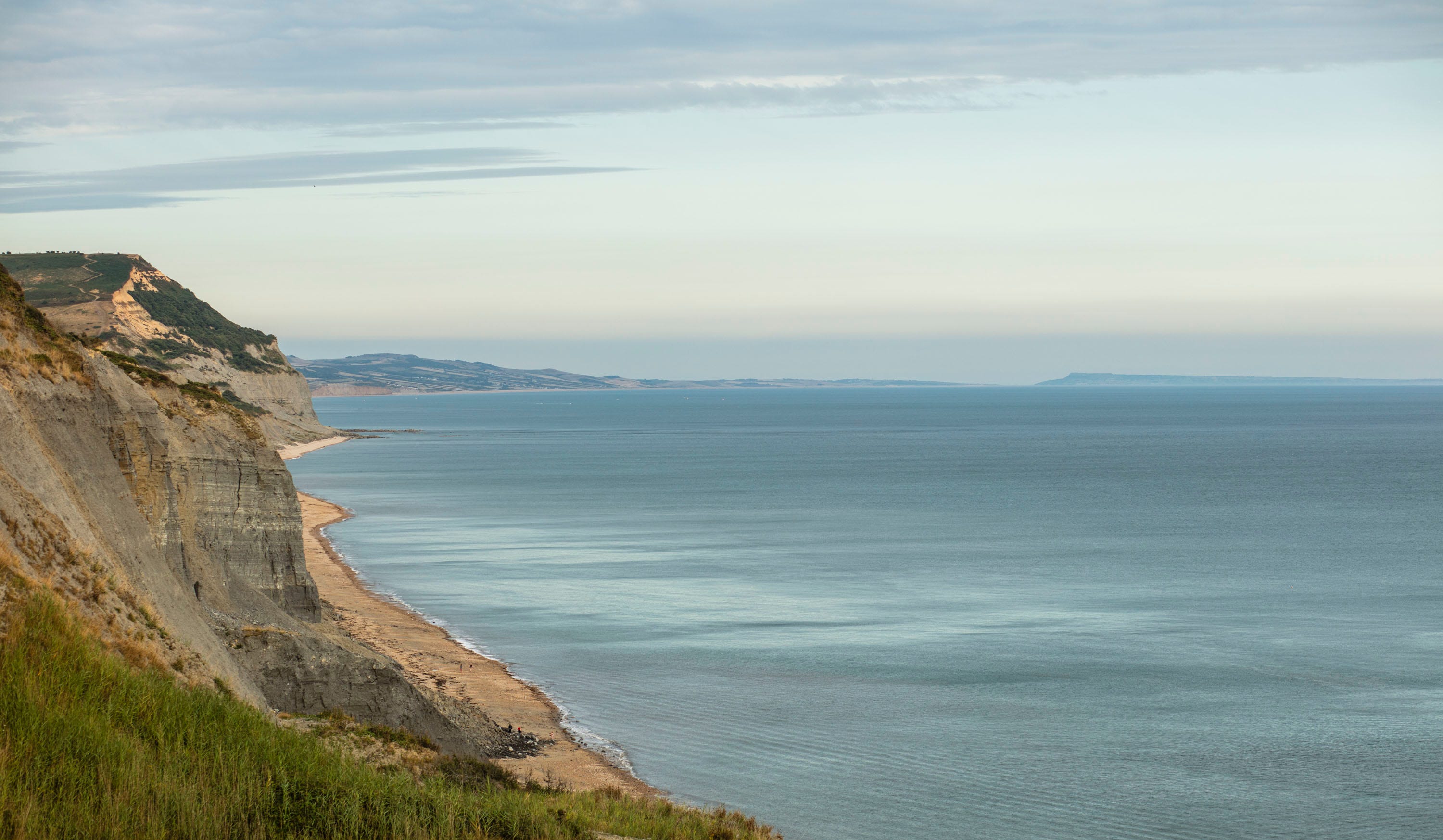 Lloyd Russell, University of PlymouthThe UK coastline near Charmouth, in Dorset, has yielded a large number of fossils.

His team dated the fossil to be between 190 and 199 million years old, which predates the next-oldest fossil depicting a coleoid attack by 10 million years.

Why predator and prey died together

Malcolm Hart, Proceedings of the Geologists’ AssociationAn image showing the full fossil with the body of the squid on the left and its arms, with the trapped fish, to the right.

In their study, the researchers offer two guesses as to why the cephalopod met its doom instead of satiating its hunger.

One hypothesis is that the squid’s eyes were bigger than its stomach: The fish was simply too large for its attacker, and became lodged in the predator’s beak. Eventually, the squid died, and the pair sank to the seafloor together.

Hart and his colleagues also suggested that the greedy cephalopod, after biting down on its hapless prey, purposefully sunk down to deeper waters to avoid other predators.

But in doing so, it entered a part of the ocean too deficient in oxygen to survive, and suffocated.