What Queen Elizabeth's relationship was like with every US president, from Truman to Trump 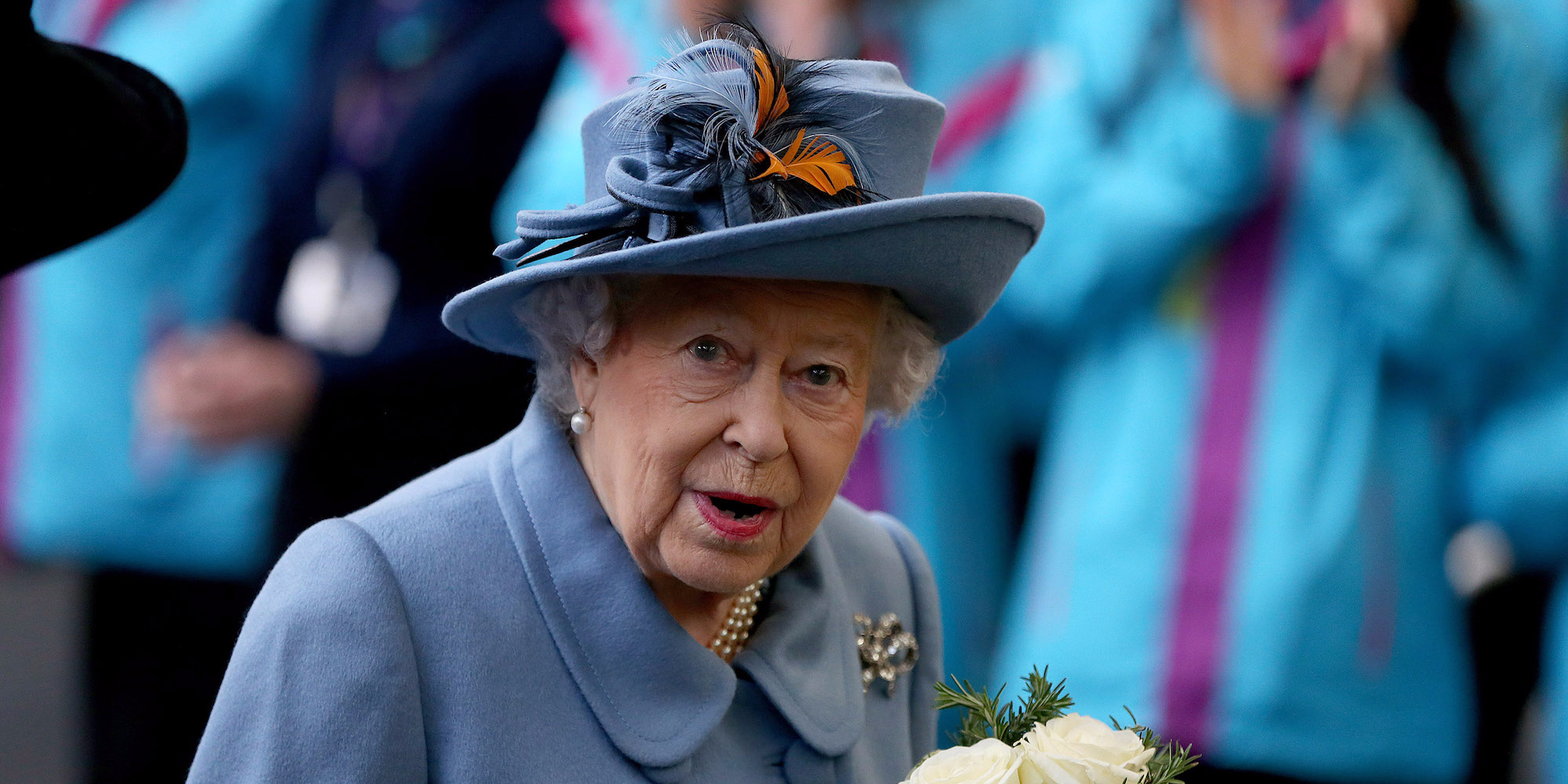 The queen, who ascended to the throne in 1952 and is currently the world’s longest-reigning monarch, has played a major role in facilitating the US and UK’s “special” diplomatic relationship and has met with 12 American presidents at places including Buckingham Palace, the White House, and even a Baltimore Orioles game.

President Donald Trump and First Lady Melania Trump last visited with the royals from June 3-5, 2019 on a special state visit to commemorate the 75th anniversary of D-Day.

They attended several distinctly British meet-and-greet opportunities, including tea with heir Prince Charles, a banquet at Buckingham Palace, a tour of Westminster Abbey, and a D-Day anniversary ceremony, most of which was alongside royalty.

The queen travelled to Washington, DC for the first time to meet President Harry Truman in 1951 when she was still a princess, and has also hosted Trump at Windsor Castle when he visited England in 2018.

Here’s what the queen’s relationships and meetings with US presidents have been like, from Harry Truman to Donald Trump.

When Queen Elizabeth was still a princess in 1951, she travelled to Washington, DC to the first time to meet President Harry Truman, and the two complimented each other’s nations. “Free men everywhere look towards the United States with affection and with hope,” she told Truman. 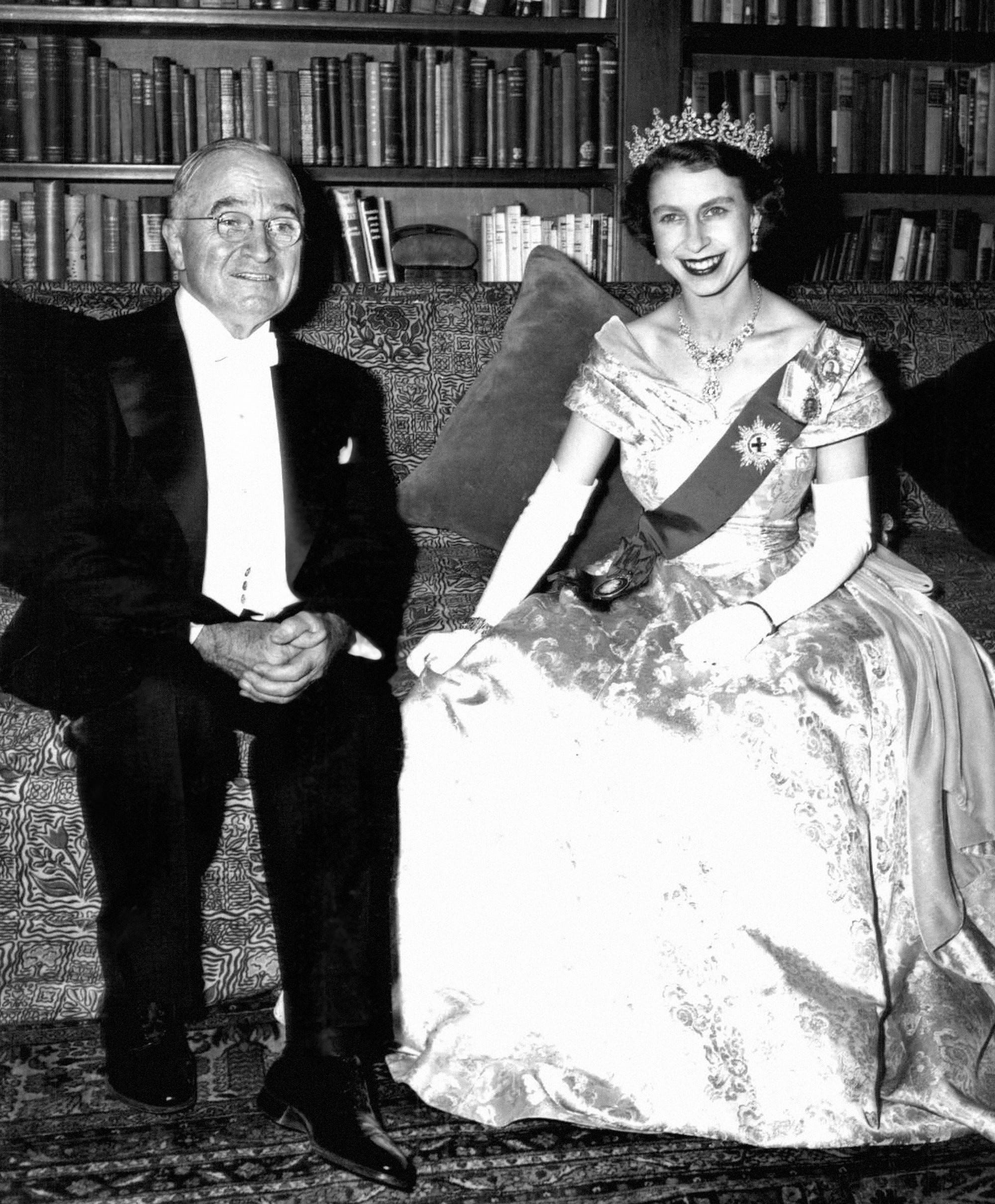 AP PhotoPrincess Elizabeth and President Harry Truman sit for this picture in the Canadian Embassy in Washington, on Nov. 1, 1951 during formal dinner for the Trumans. The Princess and her husband, the Duke of Edinburgh, played host to the Trumans. This was one of the high spots of the royal couple’s Washington visit which followed their Canadian tour.

The queen developed a close friendship with President Dwight Eisenhower, who hosted Her Majesty for her first state visit to the US as queen. They corresponded by letter for years — with the queen even sharing her recipe for grilled scones with Eisenhower. 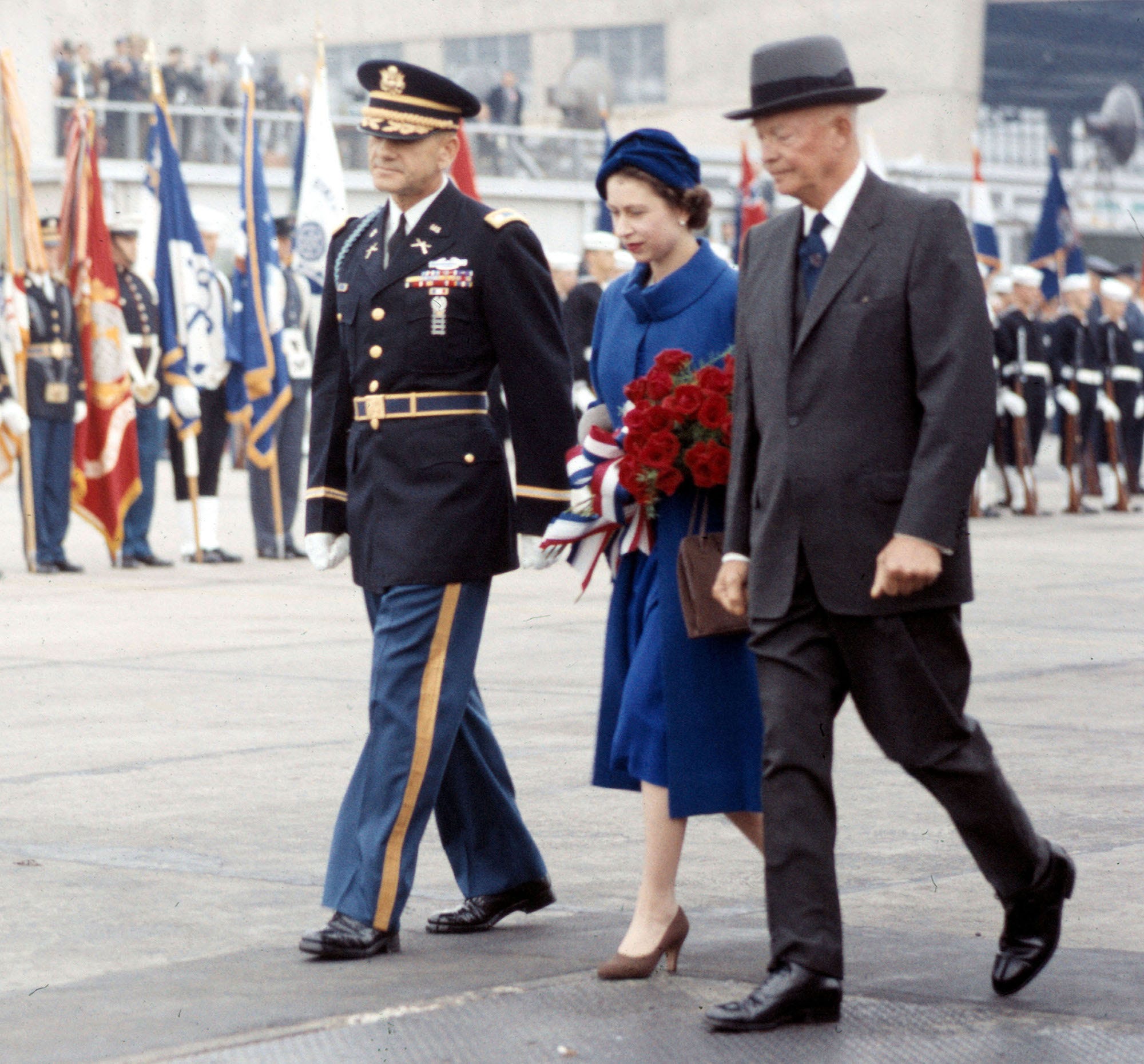 APBritain’s Queen Elizabeth II walks with U.S. President Eisenhower past the Guard of Honour at Washington National Airport, Oct. 17, 1957. The Commander of the Honour Guard Lt. Colonel Robert Phelps marches beside the Queen.

The queen reportedly felt upstaged and outshined by Jacqueline Kennedy when she and President Kennedy toured France and England in the summer of 1961 The queen hosted them at Buckingham Palace. 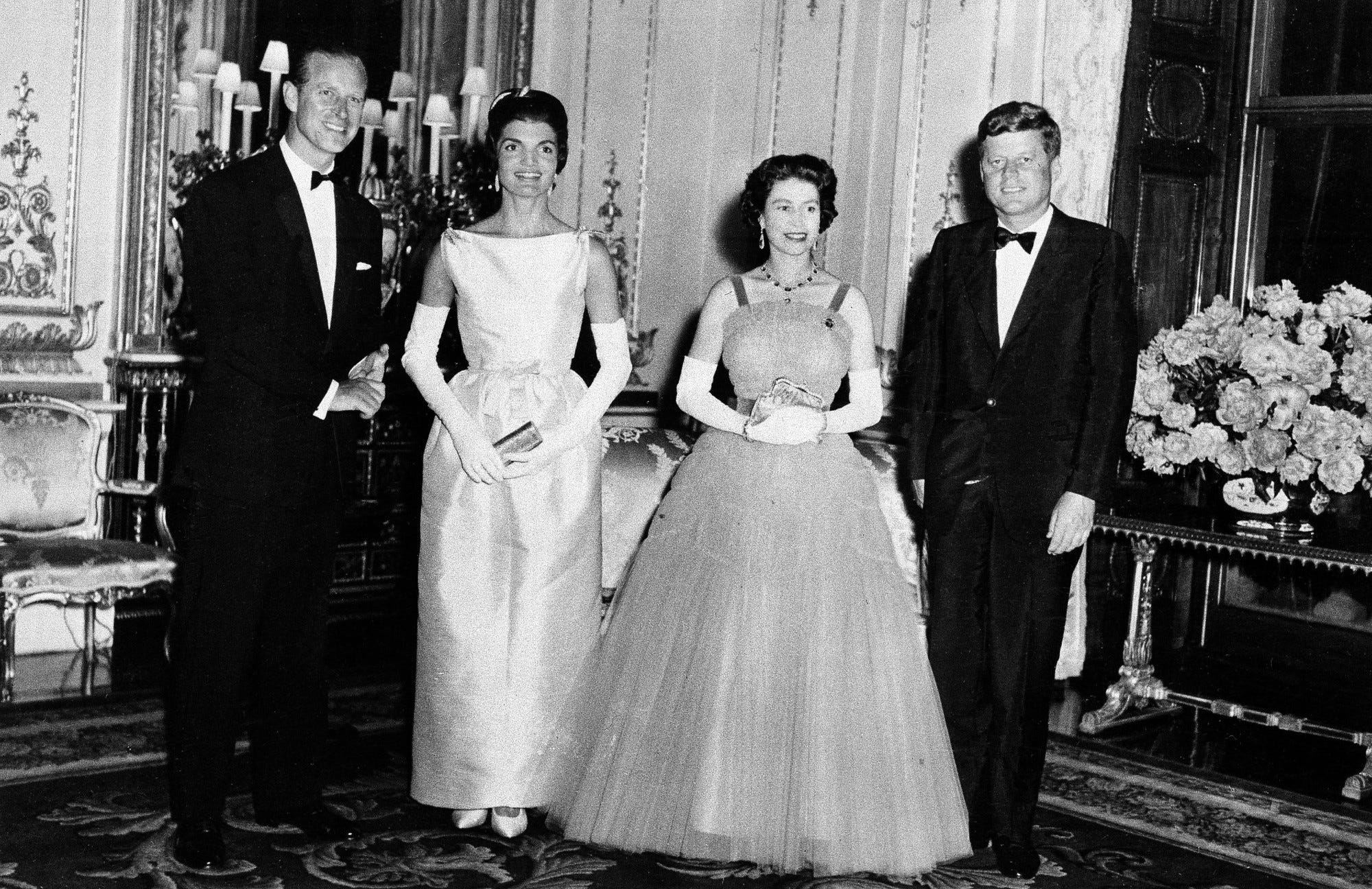 Nevertheless, Queen Elizabeth and President Kennedy warmly corresponded until his death in 1963, after which the queen created a physical memorial and a scholarship fund in Kennedy’s honour. 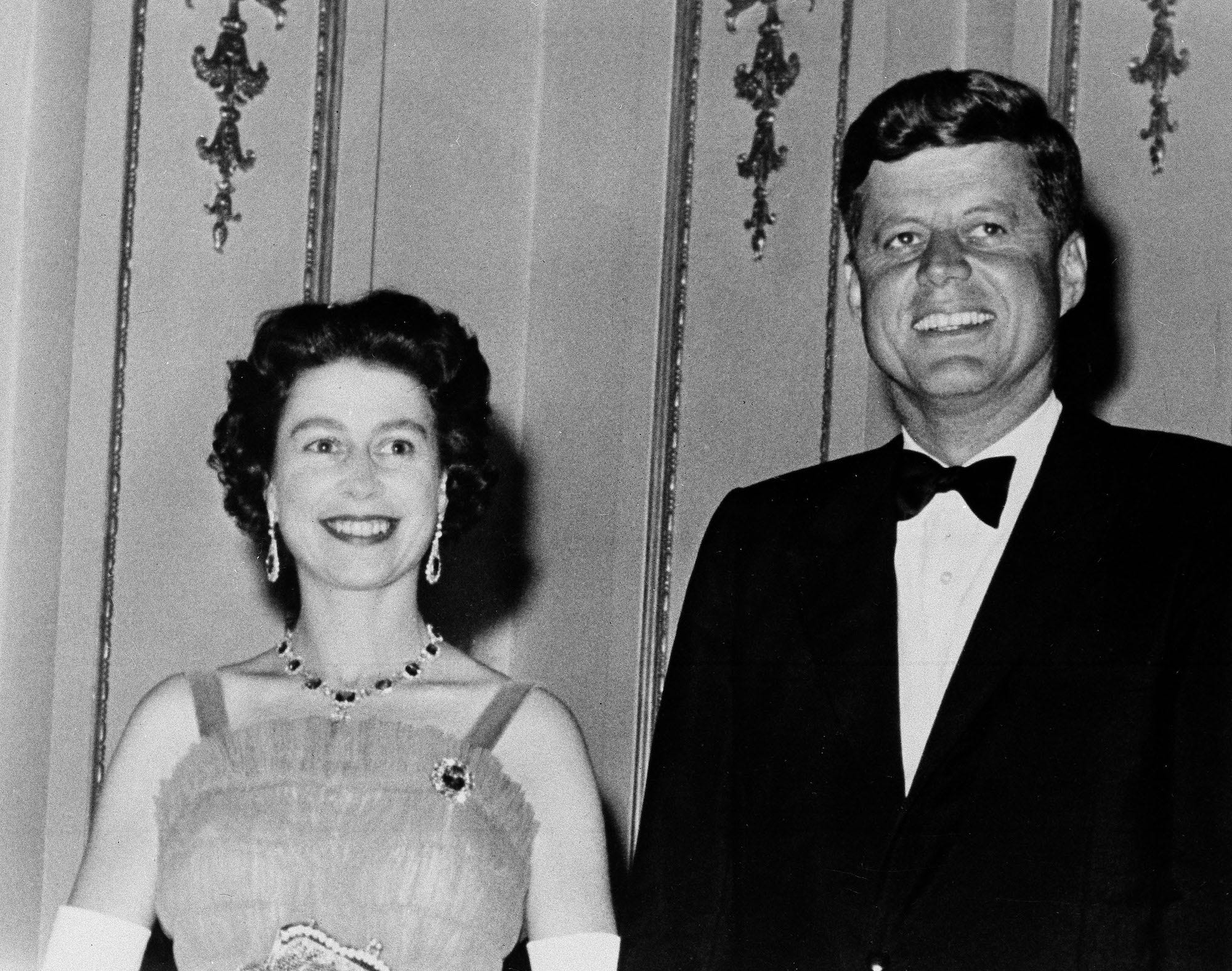 President Richard Nixon met the queen multiple times during his time as vice president and president — and reportedly tried to fix his daughter Tricia up with Prince Charles, the queen’s eldest son. 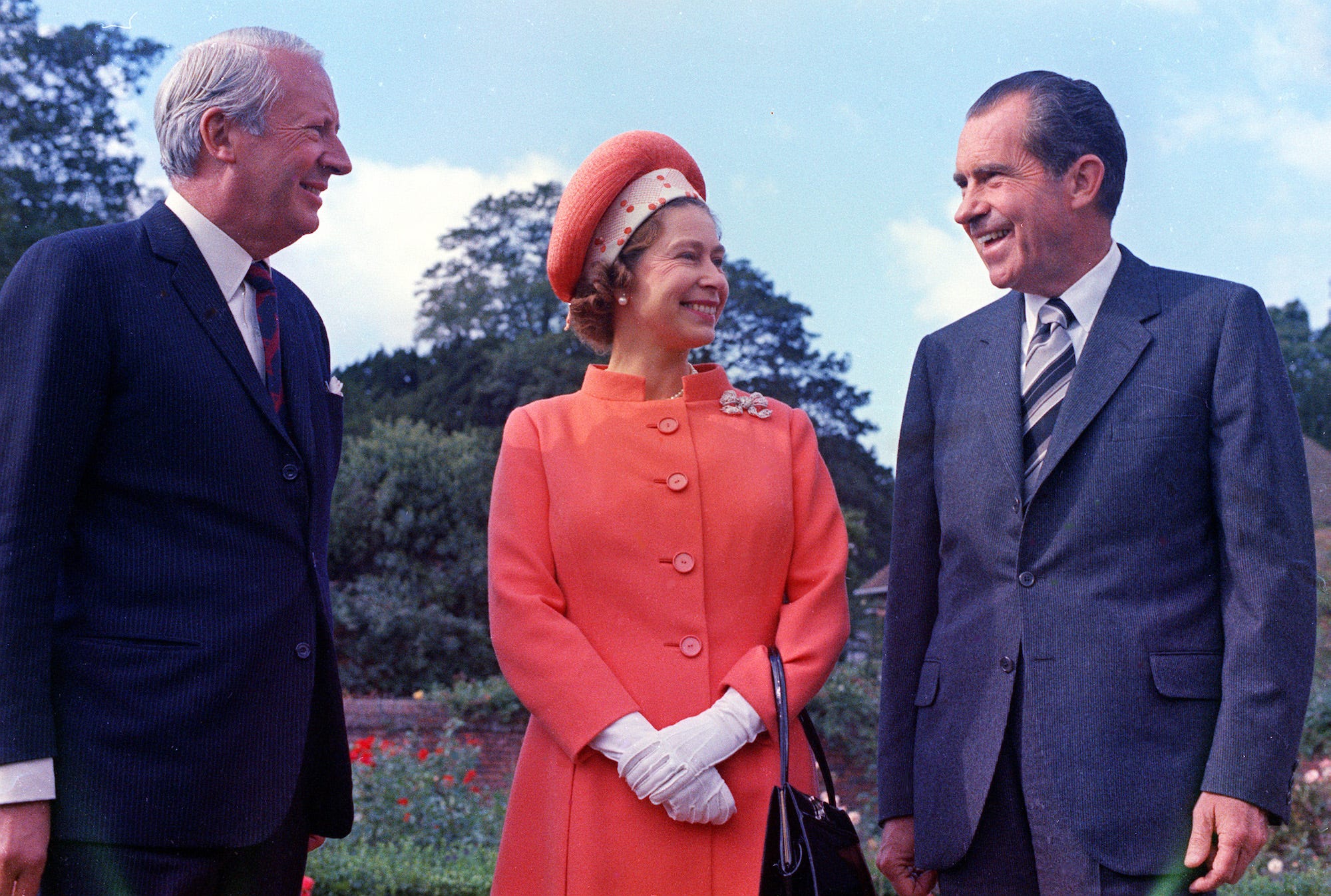 President Gerald Ford hosted Queen Elizabeth and Prince Phillip for a state dinner. “If I hadn’t kept mixing up Your Highness and Your Majesty (he’s His Highness, she’s Her Majesty) I’d give myself four stars for the way that visit went off,” First Lady Betty Ford wrote of the dinner in her memoirs. 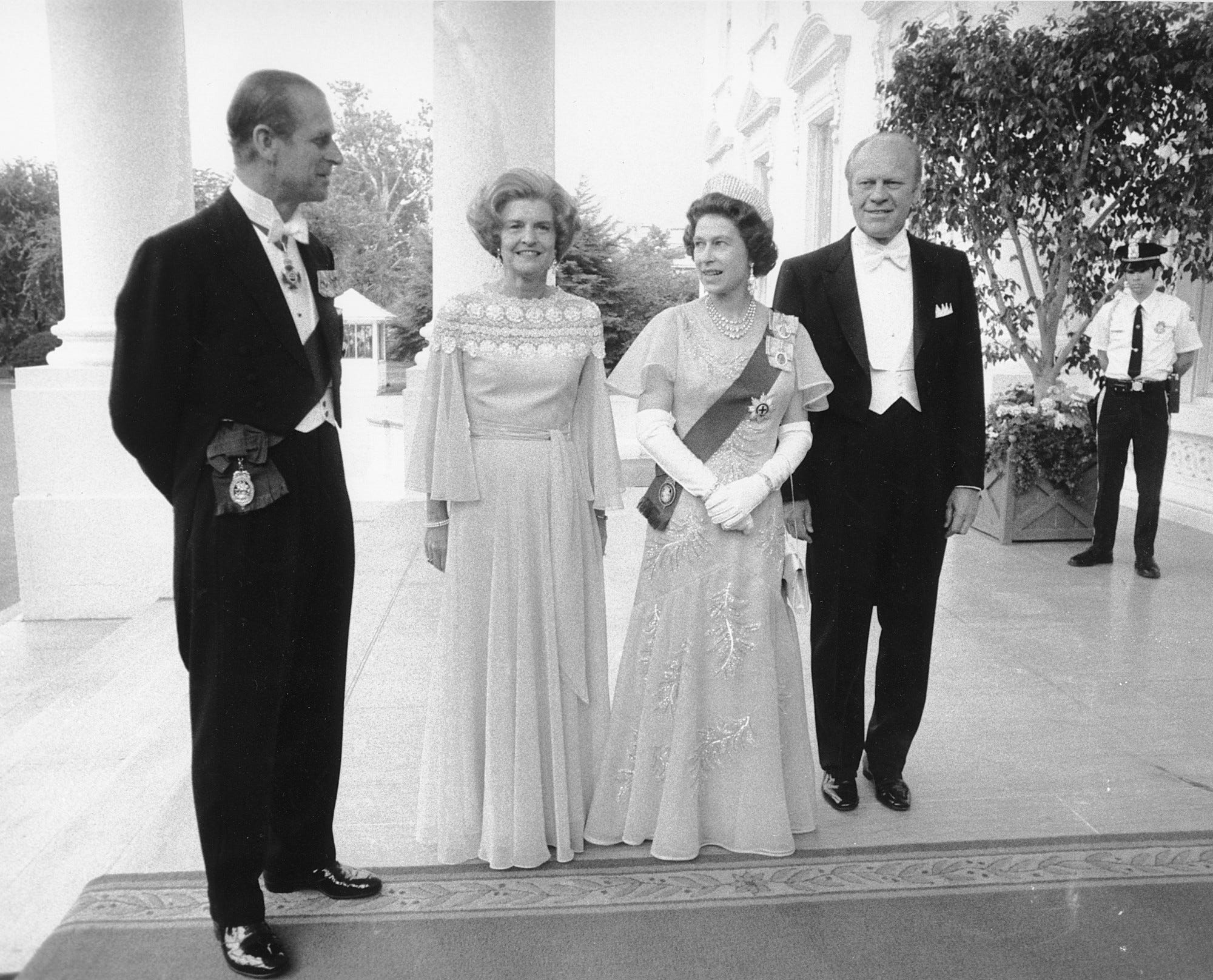 AP PhotoPresident Ford and first lady Betty Ford pose with Queen Elizabeth II and Prince Philip outside the North Portico of the White House in Washington on July 7, 1976. The Fords are hosting a state dinner for the Queen of England in the Executive Mansion.

Outside of the occasion’s formalities, the Fords did have a humorous moment with the queen during the 1976 visit that involved their 24-year-old son, Jack. 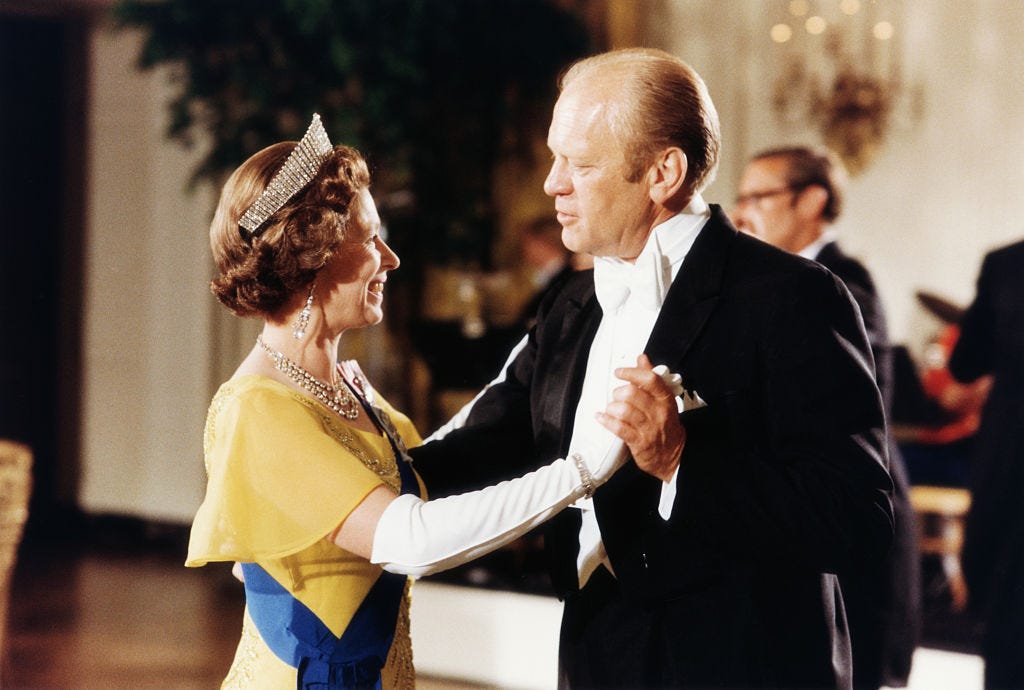 CORBIS/Corbis via Getty ImagesPresident Ford dances with England’s Queen Elizabeth during a visit by the Queen to the United States.

Kate Andersen Brower, the author of “First Women: The Grace and Power of America’s Modern First Ladies,” told CNN that when the Fords brought the queen and Prince Philip to the residence before the visit’s dinner, they ran into Jack, who was wearing jeans and a t-shirt.

The queen reassured the first lady about the run-in, saying: “Don’t worry, Betty, I have one of those at home, too.”

President Jimmy Carter committed in infamous faux-pas in kissing the Queen Mother on the lips during his visit to Buckingham Palace to attend a NATO event. 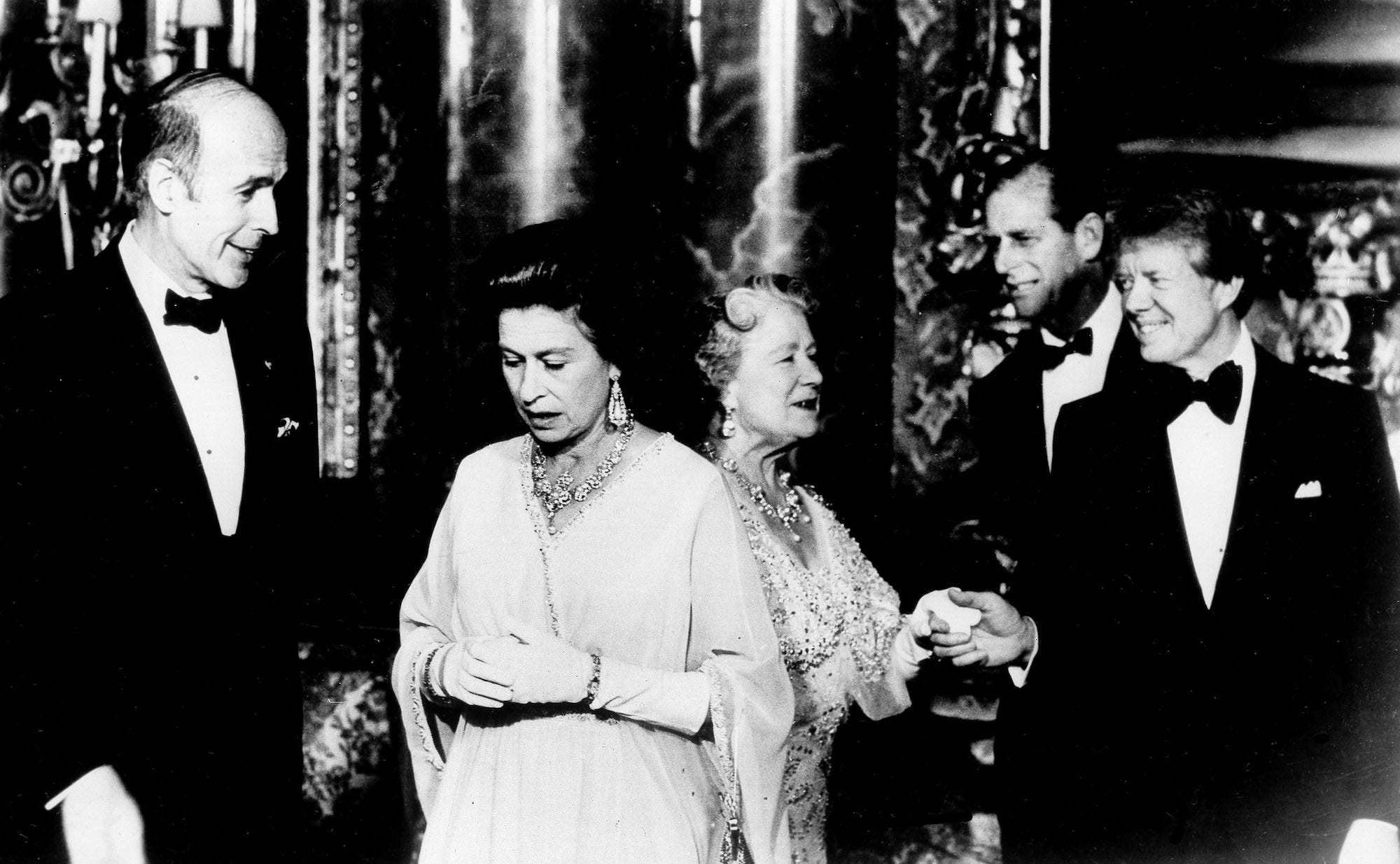 AP PhotoFrench President Giscard d’Estaing, left, chats with Queen Elizabeth II, and President Jimmy Carter escorts the Queen Mother to pose for photographers prior to the State Dinner, May 7, 1977, at Buckingham Palace

Queen Elizabeth developed a close relationship with President Ronald Reagan, with whom she shared a love of horseback riding. 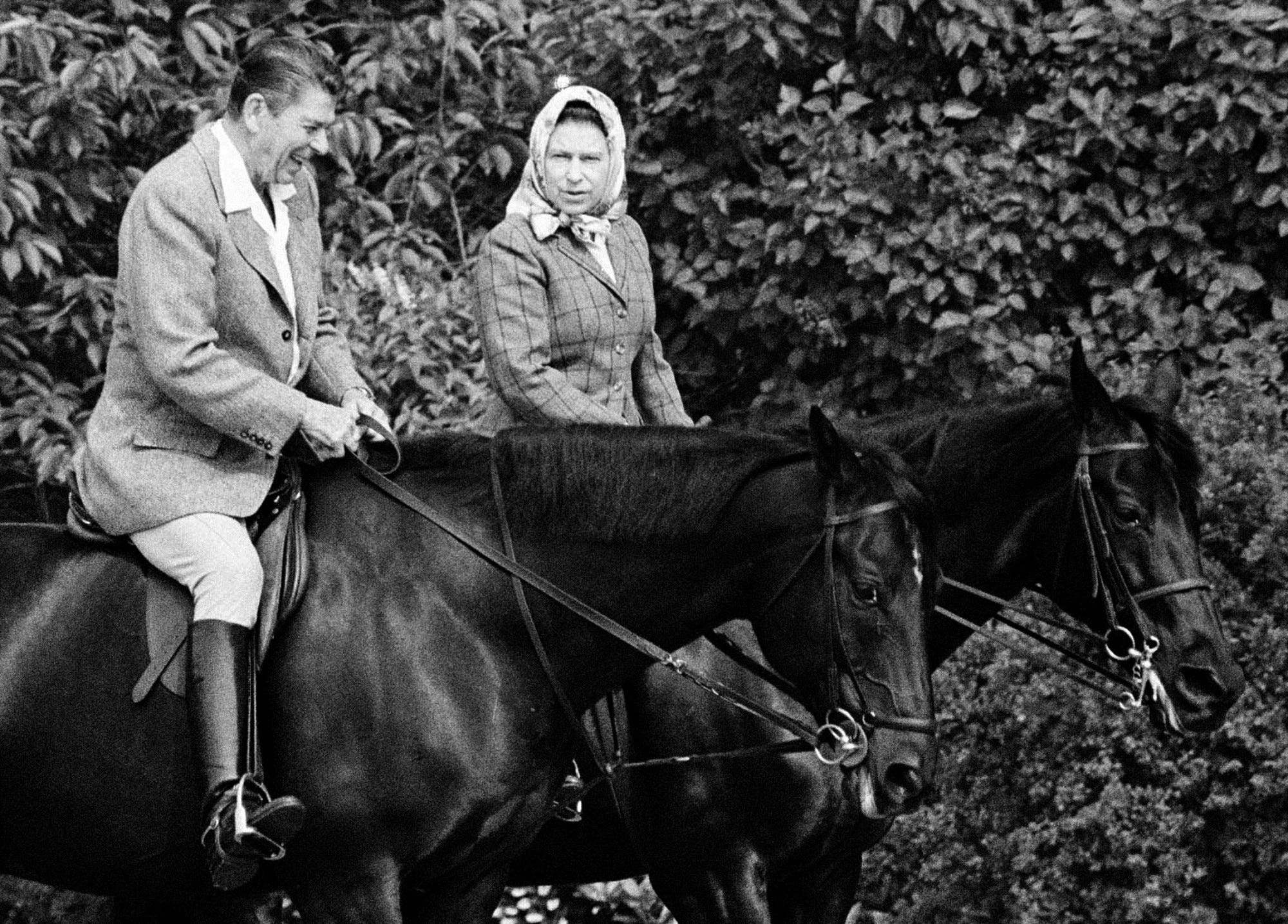 The queen was reportedly quite close with both Nancy and Ronald Reagan, whose family ranch she visited in 1983. 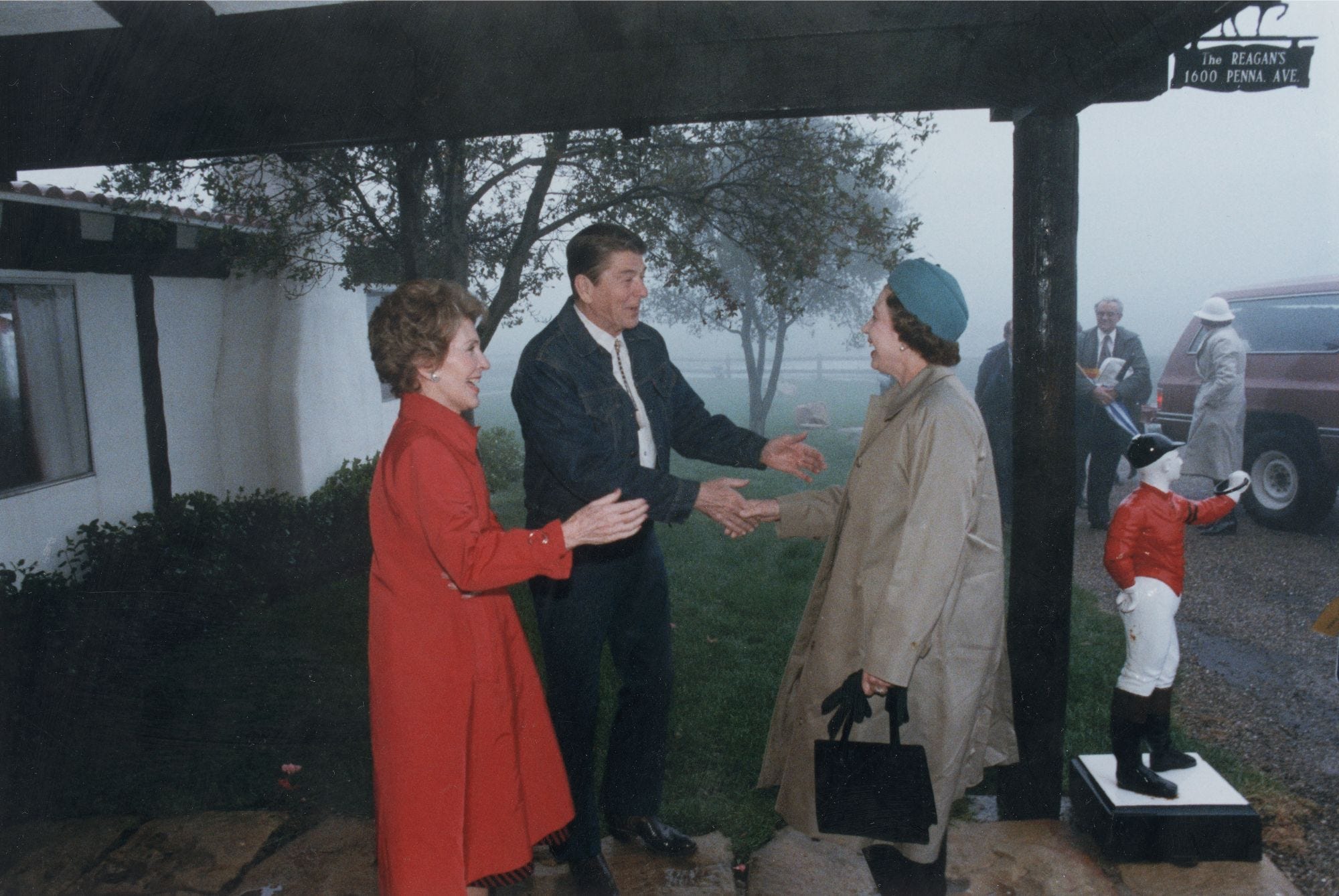 Brower told CNN the first lady wrote about the queen in her memoir and the two “had a good relationship.”

Reagan wrote that the queen came to the ranch after the president and first lady mentioned it during a visit to Windsor Castle, and the queen wanted to ride horses.

Though the queen made it to the ranch, “the weather was awful, so instead the Reagans left the ranch to go on the royal yacht Britannia,” Brower told CNN.

Despite the change of plans, Reagan wrote: “I spent that evening with the Queen, sitting on a sofa in the large living room, talking about our children like old friends.”

In 1989, the queen granted Reagan honorary knighthood — the highest distinction the United Kingdom awards foreigners — in recognition of Reagan’s assistance to the UK in the Falkland Wars. 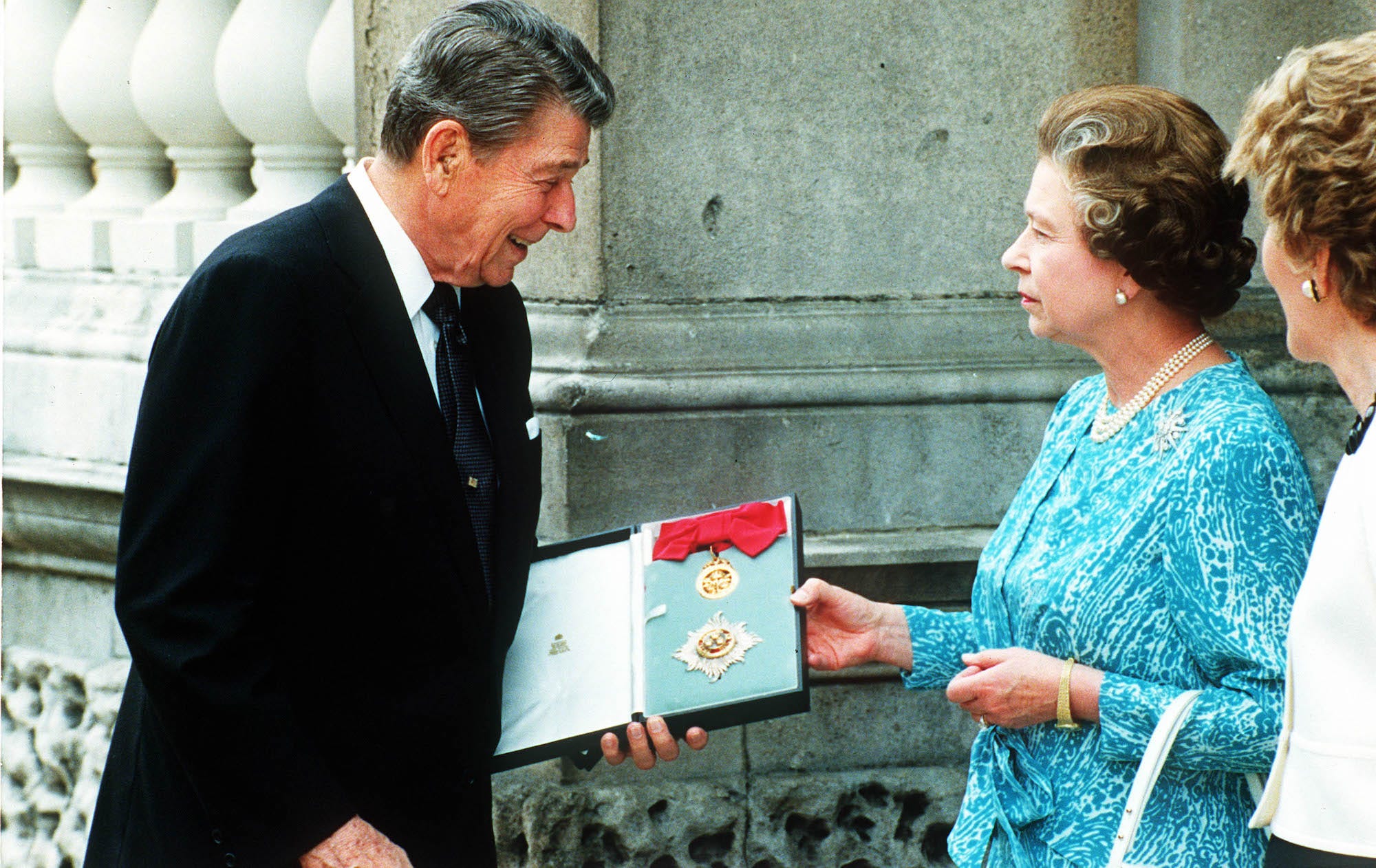 AP Photo/Martin CleaverBritain’s Queen Elizabeth II and former U.S. President Ronald Reagan, pose with the insignia of the honour ary Knight Grand Cross of the Most Honourable Order of the Bath, which the Queen conferred on Reagan, after a lunch in Buckingham Palace, London,

George H.W. Bush, a life-long baseball fan, took Queen Elizabeth and Prince Phillip to a Baltimore Orioles vs. Oakland Athletics game in 1991 — the first time the queen had been to a baseball game. 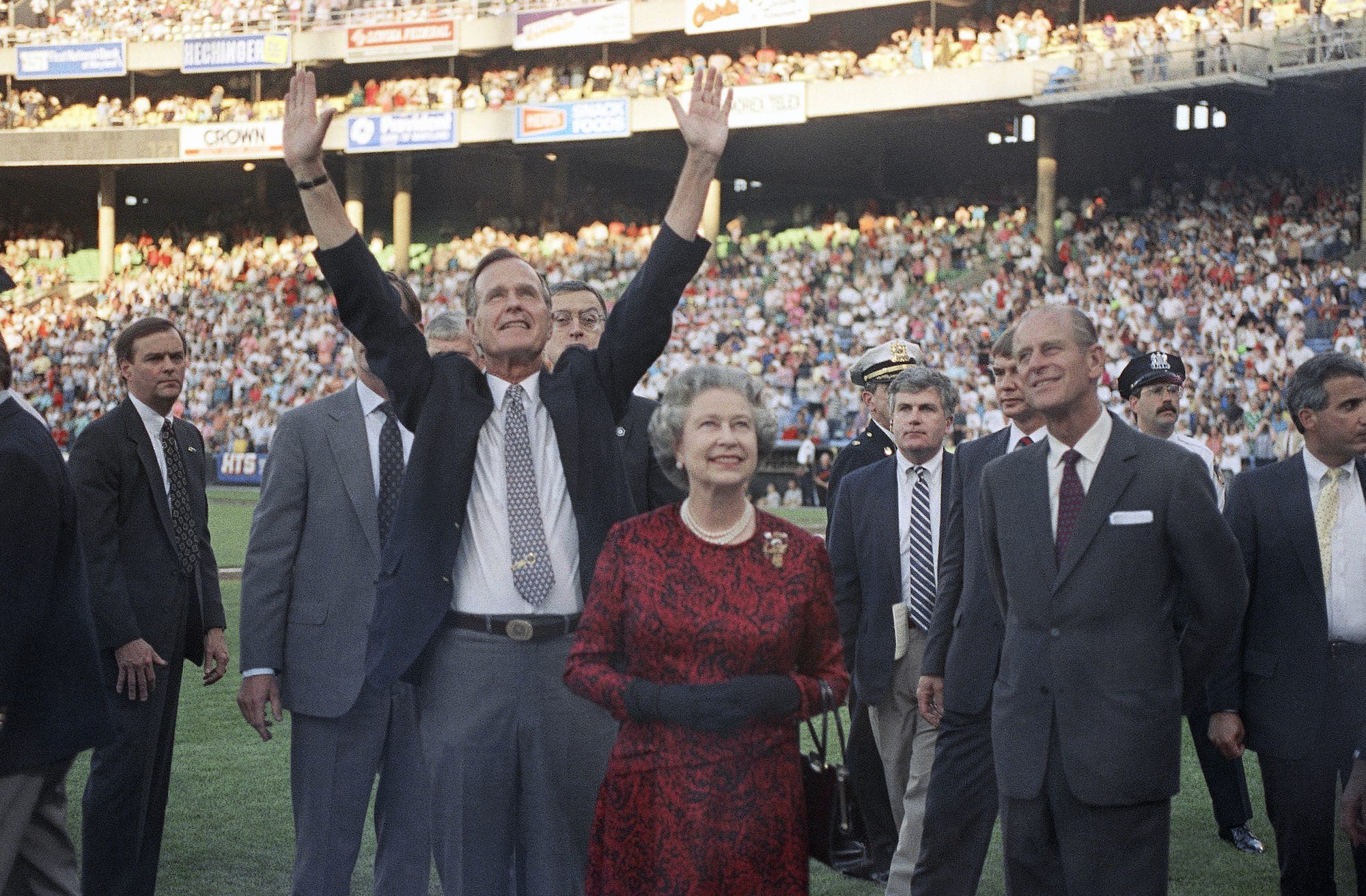 Greg Gibson/APPresident George H. Bush escorts Queen Elizabeth II and Prince Philip on the field at Memorial Stadium on Wednesday, May 15, 1991 in Baltimore, before the Orioles played the Oakland A’s.

After President Bush died in December 2018, the queen put out a statement that honoured him as “a great friend and ally of the United Kingdom” and a “patriot.” She also sent Prince Charles to represent the Royal Family at his funeral. 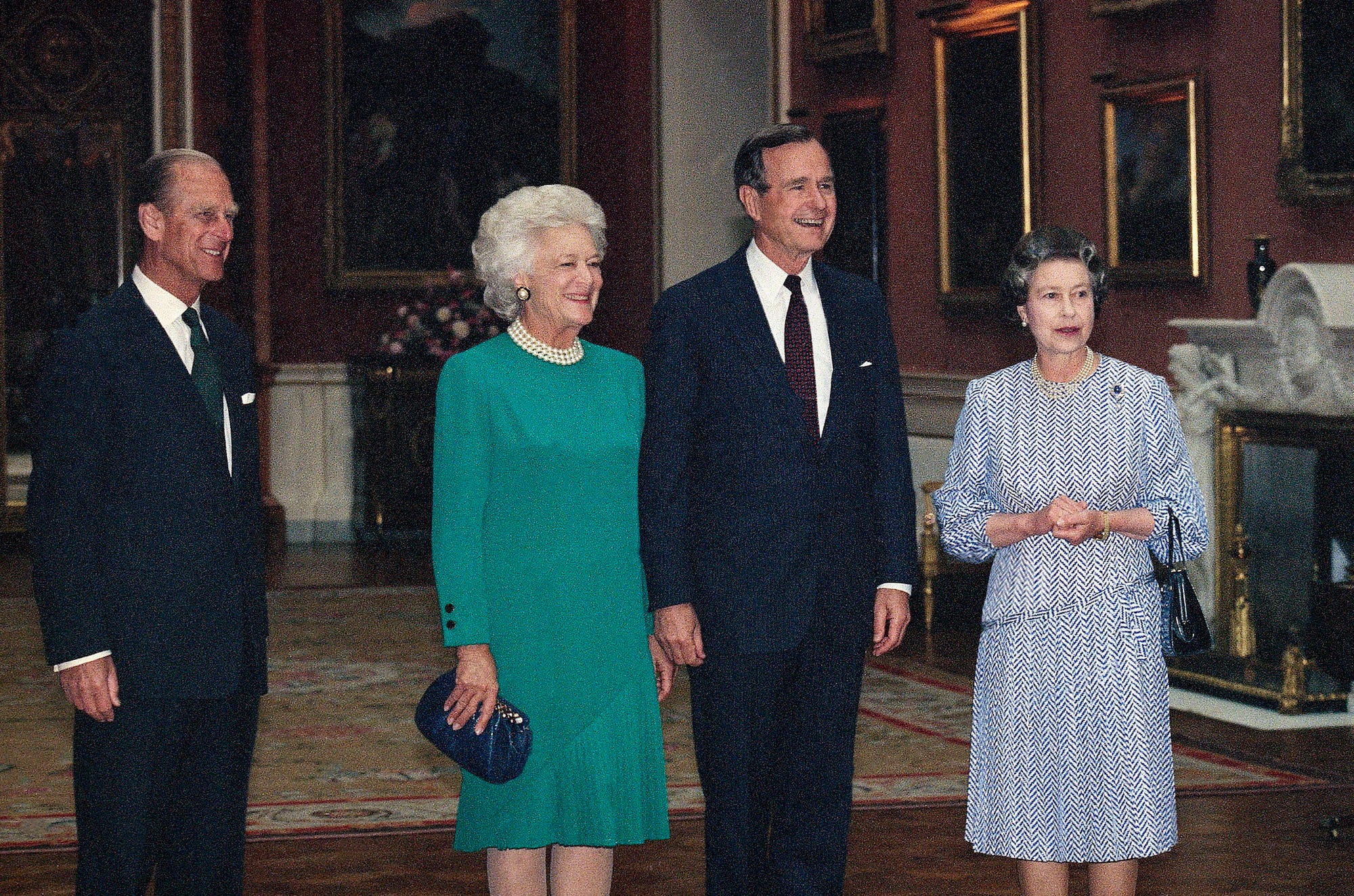 AP Photo/Doug MillsPresident and Mrs. Bush pose with Queen Elizabeth and Prince Philip, far left, Thursday, June 1, 1989 in London at Buckingham palace where the queen hosted a lunch for the first family.

“Her Majesty impressed me as someone who but for the circumstance of her birth, might have become a successful politician or diplomat. As it was, she had to be both, without quite seeming to be either,” President Bill Clinton wrote of the queen in his memoir. 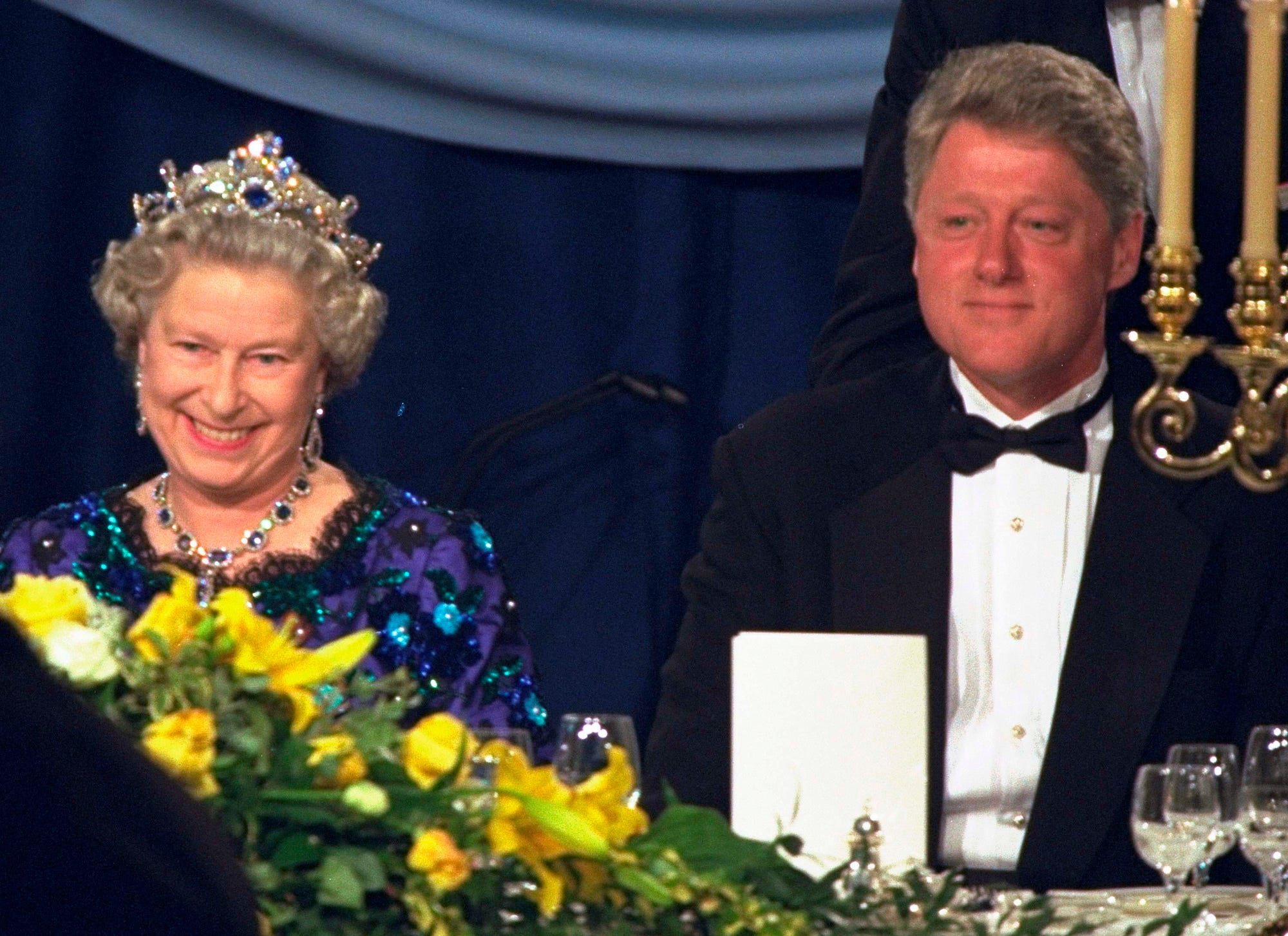 AP Photo/Doug Mills, FileIn this Saturday, June 4, 1994 file photo, Britain’s Queen Elizabeth smiles, as she sits alongside President Bill Clinton at a dinner in the Guildhall in Portsmouth, England, commemorating the 50th anniversary of D-Day.

In 2007, Queen Elizabeth poked some light-hearted fun at George W. Bush over his mistakenly saying she had to come to celebrate America’s bicentennial in 1776 instead of 1976. 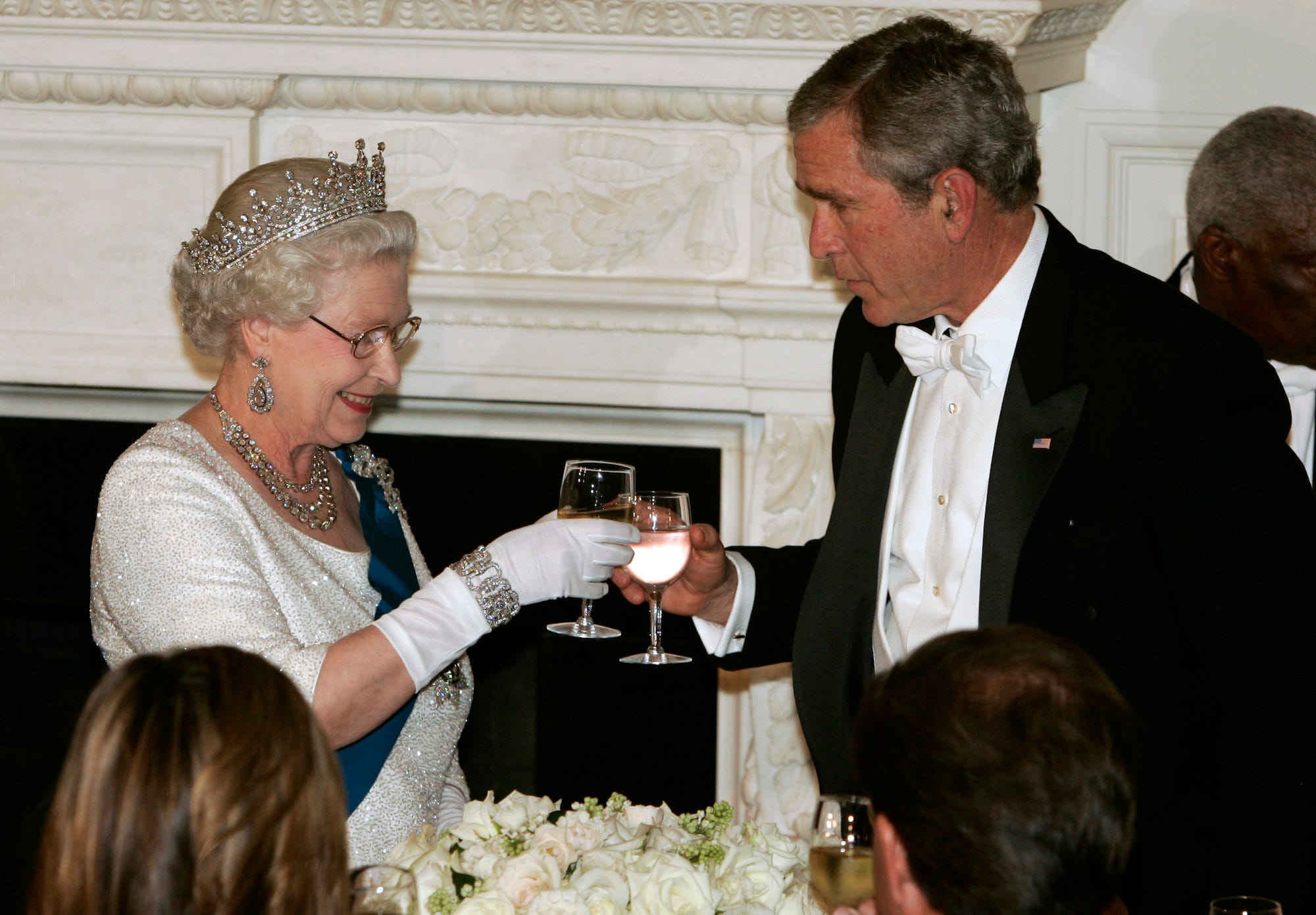 Evan Vucci/APPresident Bush toasts with Queen Elizabeth II, left, during a State Dinner at the White House on Monday, May 7, 2007 in Washington

In 2009, President Barack Obama gifted the queen an iPod with historical video footage of her previous visits to the US going back to the 1950s, as well as his 2009 inaugural address and 2008 speech at the Democratic National Convention. 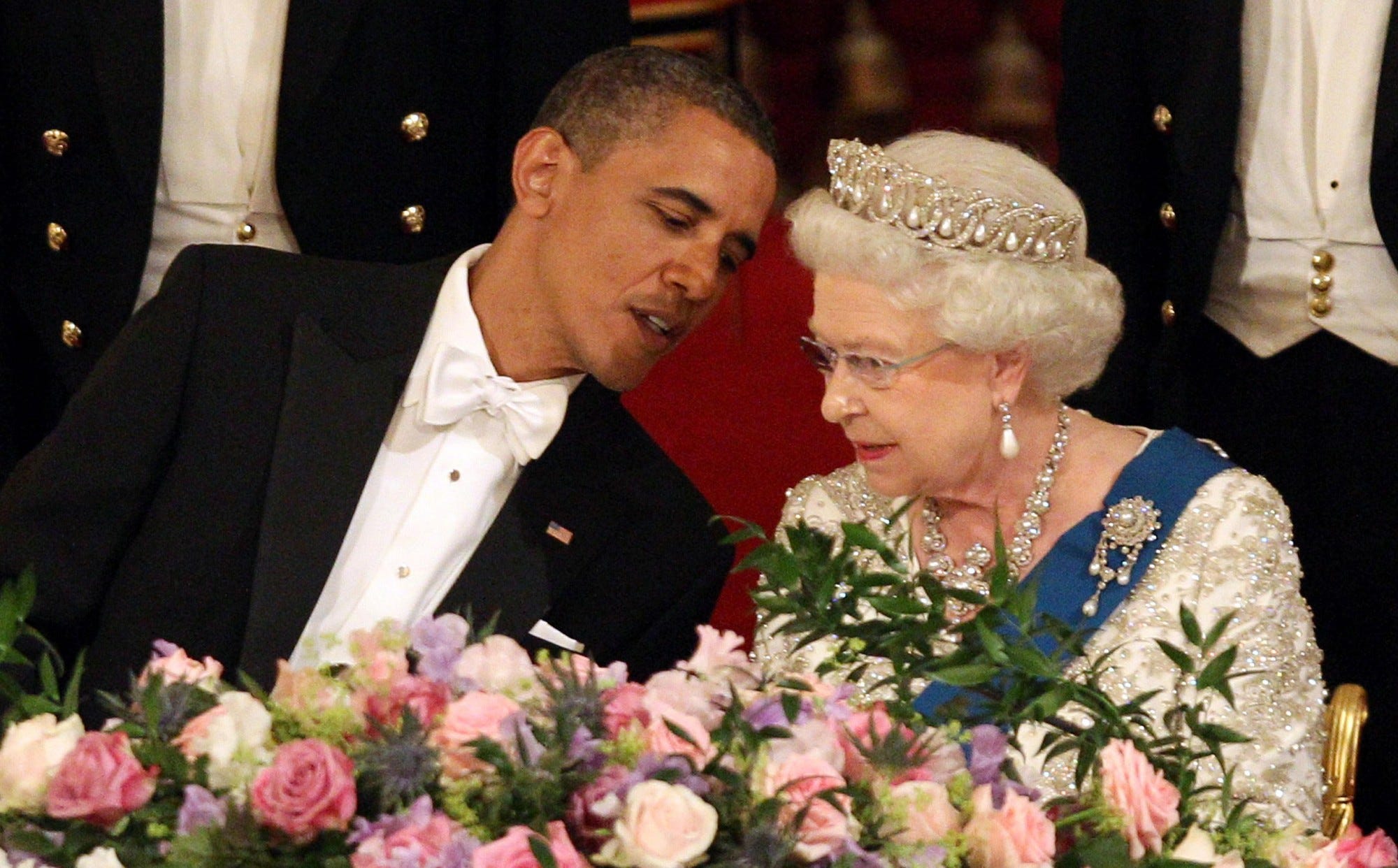 In her memoir “Becoming,” Michelle Obama described accidentally violating royal protocol by putting her arm around the queen as a show of affection and support, but says Her Majesty didn’t seem offended and reciprocated the gesture back. 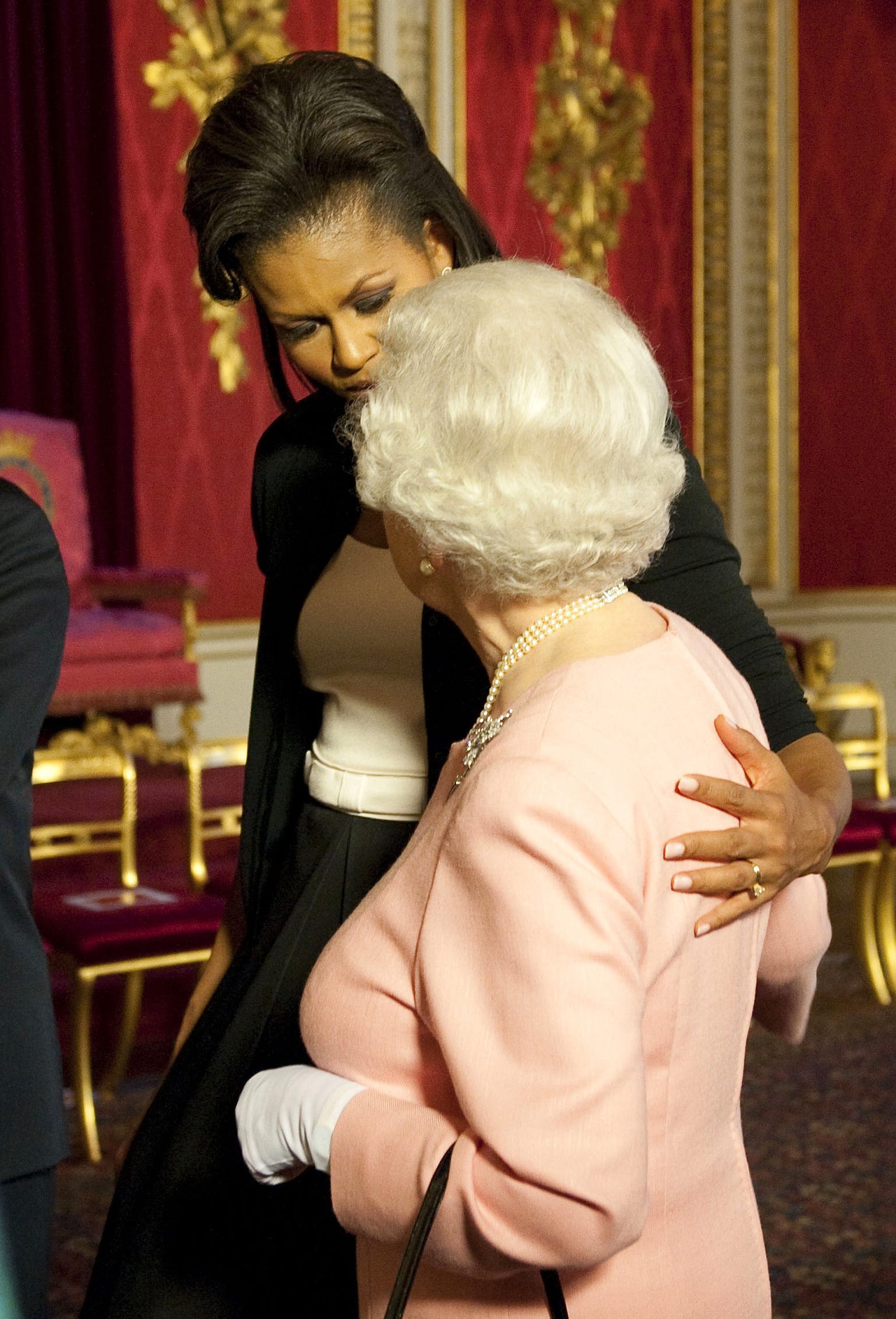 President Donald Trump was accused of committing several royal faux-pas during his summer 2018 visit to England — including being late to meet the queen at Windsor Castle, walking in front of her, shaking her hand instead of bowing, and turning his back to her. 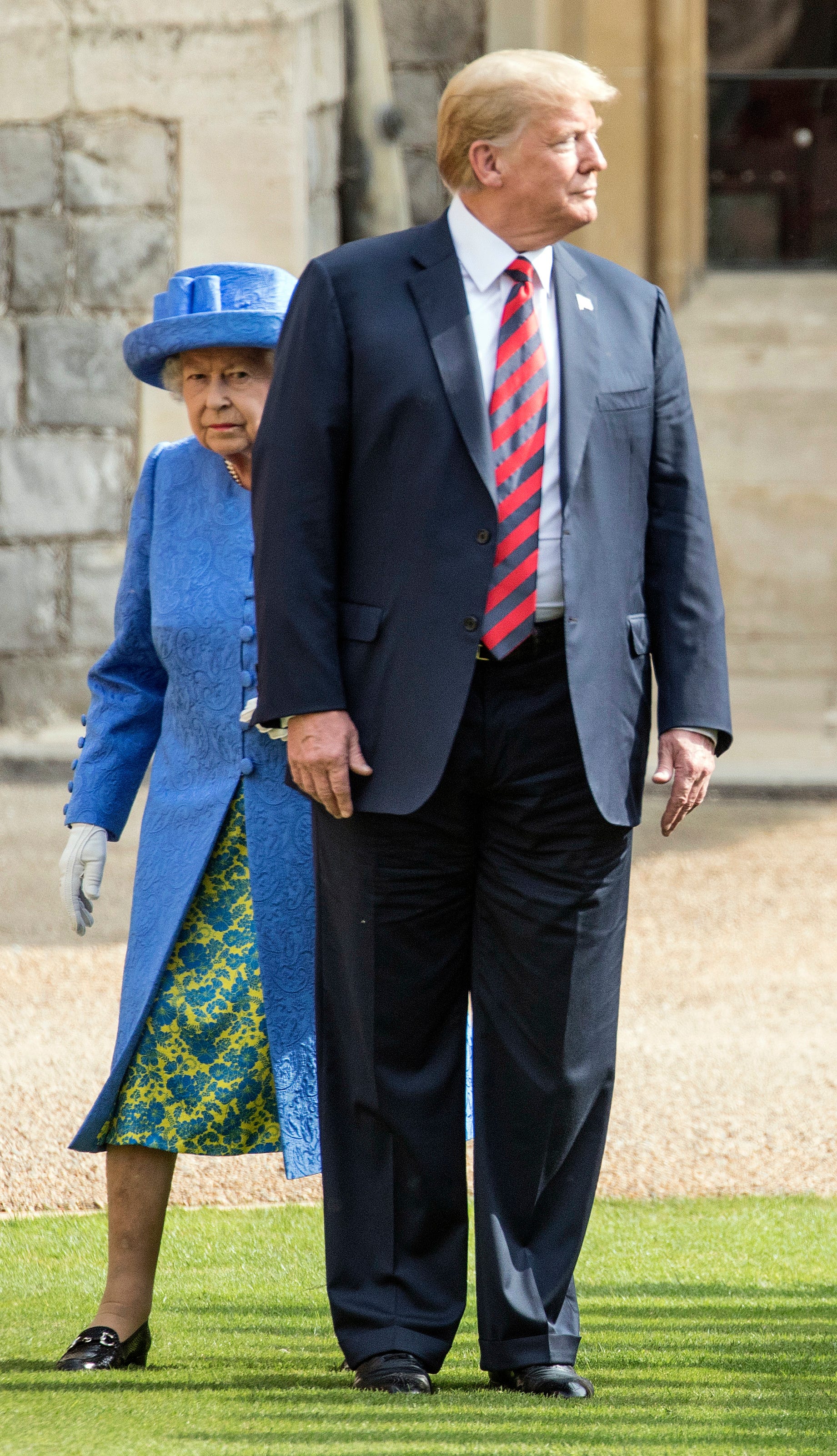 Richard Pohle/Pool Photo via APBritain’s Queen Elizabeth II, background and US President of the United States Donald Trump walk from the Quadrangle after inspecting the Guard of Honour, during the president’s visit to Windsor Castle,

While the queen has been diplomatically mum on her opinions of Trump, he has praised Her Majesty. “If you think of it, for so many years she has represented her country, she has really never made a mistake. You don’t see, like, anything embarrassing. She is just an incredible woman,” Trump said of the queen before their meeting.

Trump embarked on his second chance to connect with the queen on June 3, when they opened the three-day state visit to the UK at Buckingham Palace. He joined her to commemorate the 75th anniversary of D-Day on Thursday. 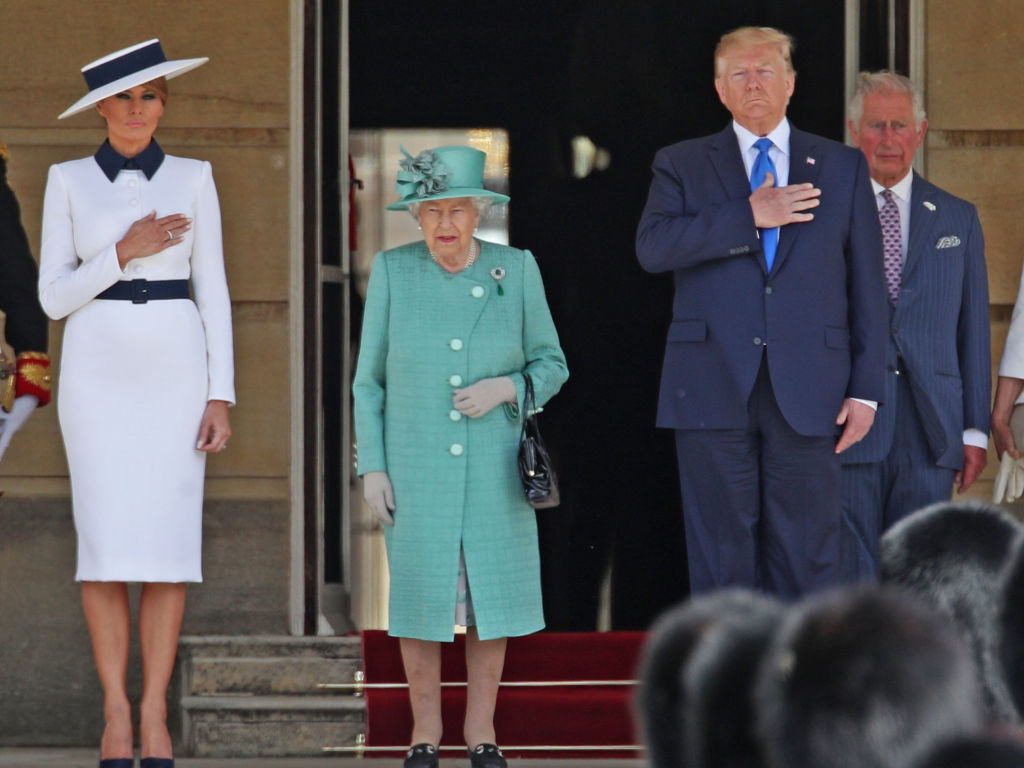