If you set aside the fact that Queen Elizabeth II is the longest-reigning British monarch, she’s just like us.

The Queen’s eight grandchildren and eight great-grandchildren have kept her busy through the years, from their christening ceremonies as babies to their weddings and having babies of their own.

Here are 22 photos of Elizabeth in full-on grandmother mode. APElizabeth with Zara and Peter Phillips.

Princess Anne was riding in the Horse Society Centenary displays in 1984.

She still accompanies them to swanky events now that they’re all grown up. Toby Melville/Pool via APElizabeth with Zara and Mike Tindall.

Elizabeth left the Patron’s Lunch in honour of her 90th birthday with Zara Tindall (previously Phillips) and her husband, Mike Tindall, in 2016. The party had been organised by her brother, Peter Phillips.

She read to them when they were kids.

Elizabeth read to Zara Phillips at the Windsor Horse Show in 1987.

And held them on her lap. 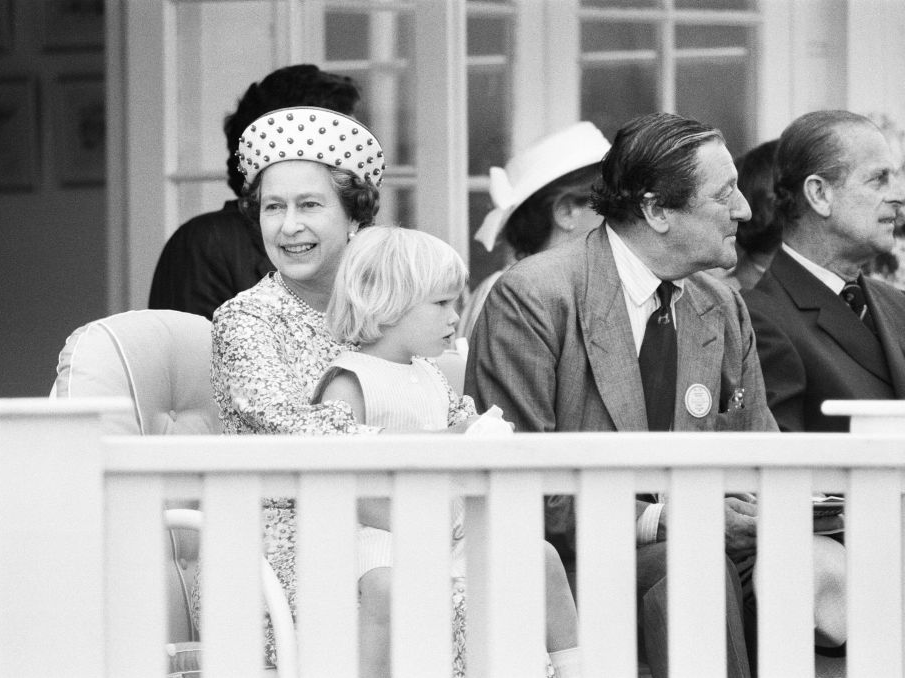 Elizabeth held Zara Phillips on her lap at a polo match at Smith’s Lawn in Windsor in 1984.

She and her grandchildren took trips together. 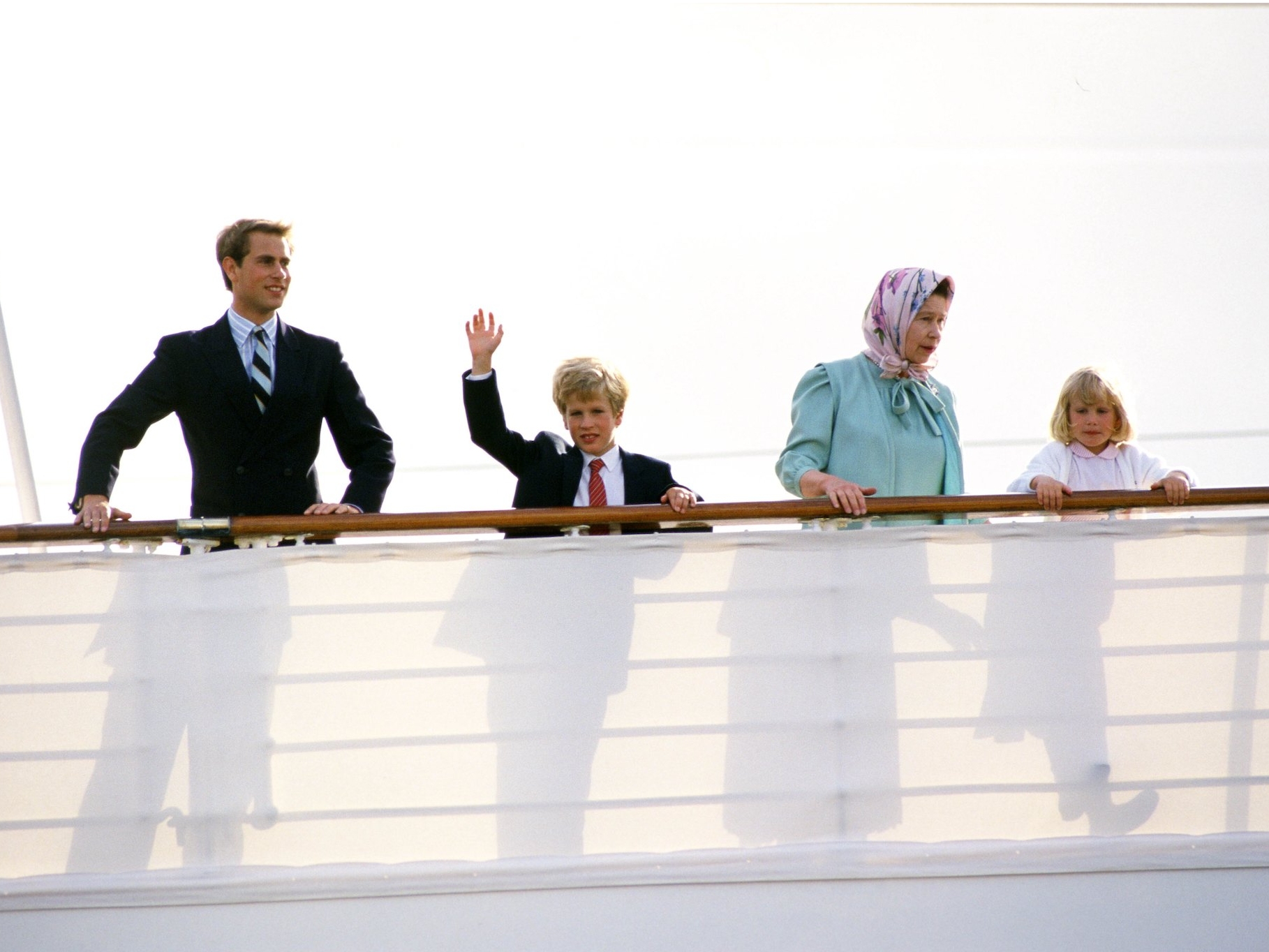 Elizabeth posed for photos with Prince Edward, Earl of Wessex, and her grandchildren Zara and Peter Phillips onboard the Royal Yacht Britannia in 1986.

And went to church. 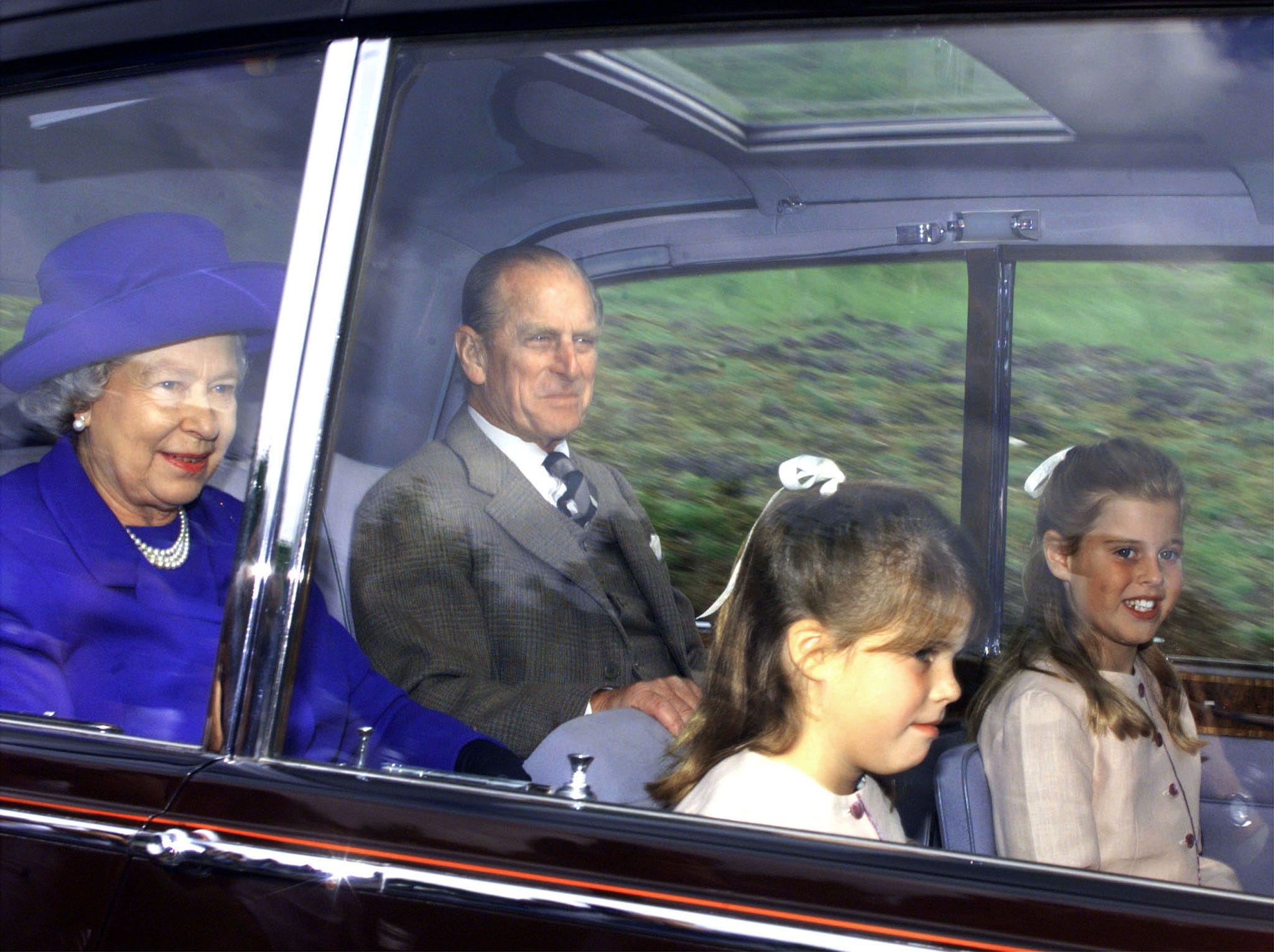 She joined Princesses Eugenie and Beatrice as they headed to Crathie Kirk near Balmoral Castle for Sunday service on August 30, 1998.

She even took them to museums and let them play on fire engines. 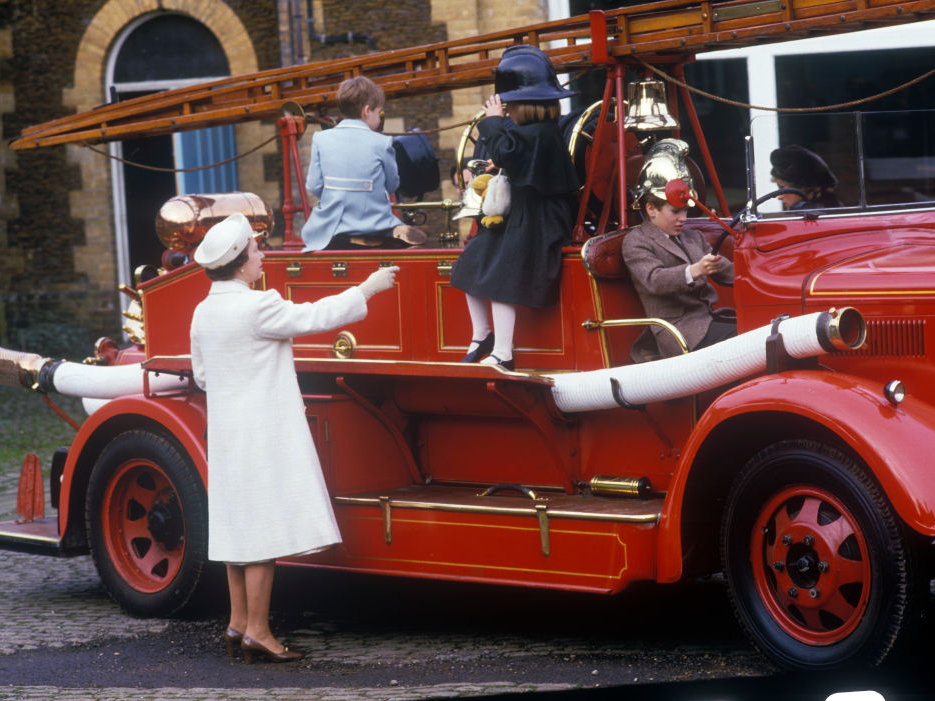 Elizabeth took her grandchildren to the Sandringham Museum in 1988.

She took Prince William and Prince Harry to a polo match in 1987. 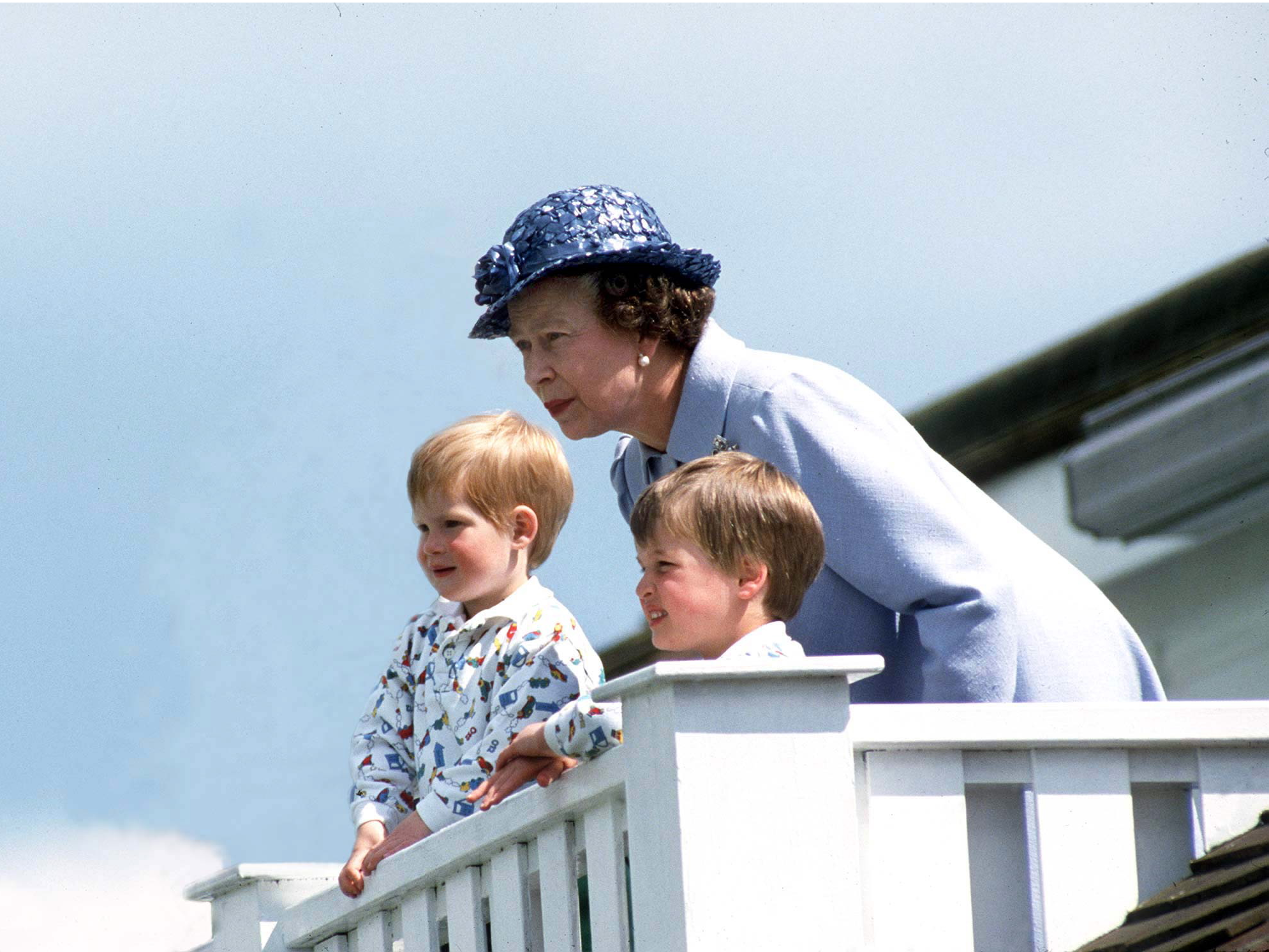 The Queen has made $US9 million in prize money from her racehorses.

They could always be seen popping their heads out at royal events. 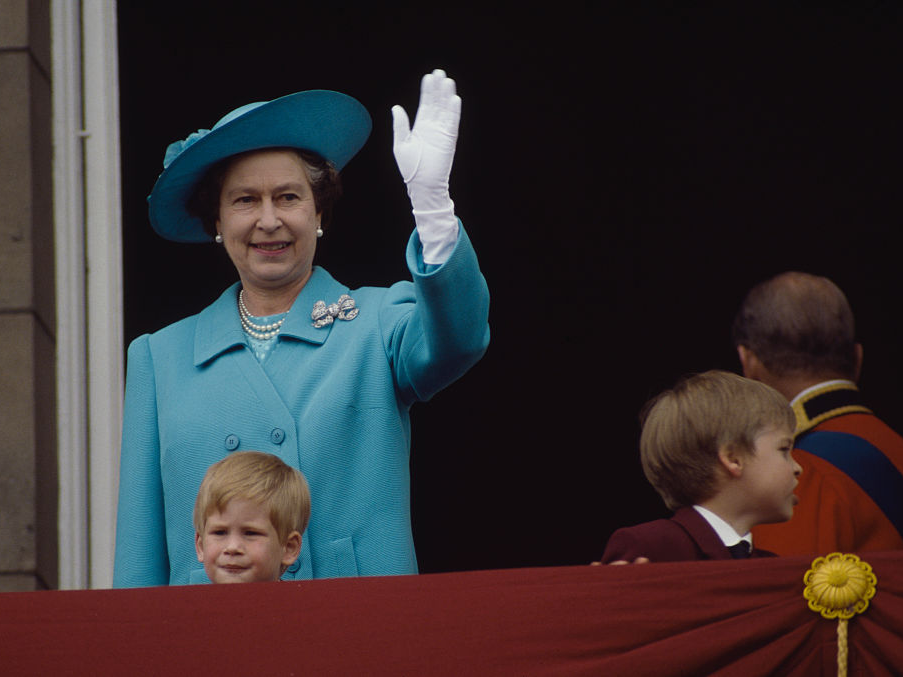 Prince Harry and Prince William joined Elizabeth on the balcony at Buckingham Palace at Trooping the Colour in 1988.

She visited Peter Phillips at school. The Queen visited Zara and Peter Phillips at Port Regis school in 1991.

When William was a child, he reportedly called Elizabeth “Gary” because he couldn’t say “Grandma.” 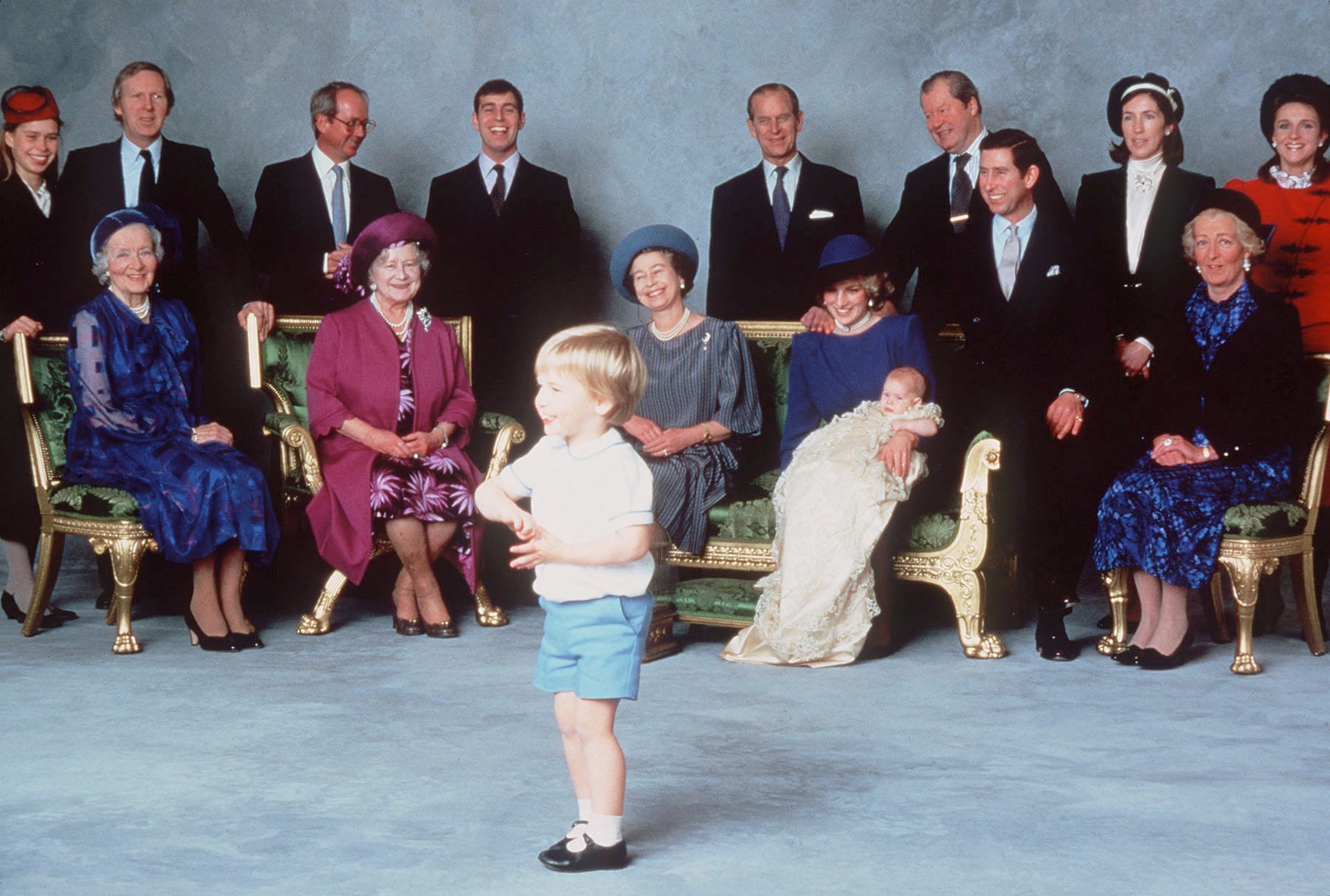 Royal relatives and godparents were amused by William’s antics at Harry’s christening in 1984.

As they grew up, her grandchildren began greeting her more formally. 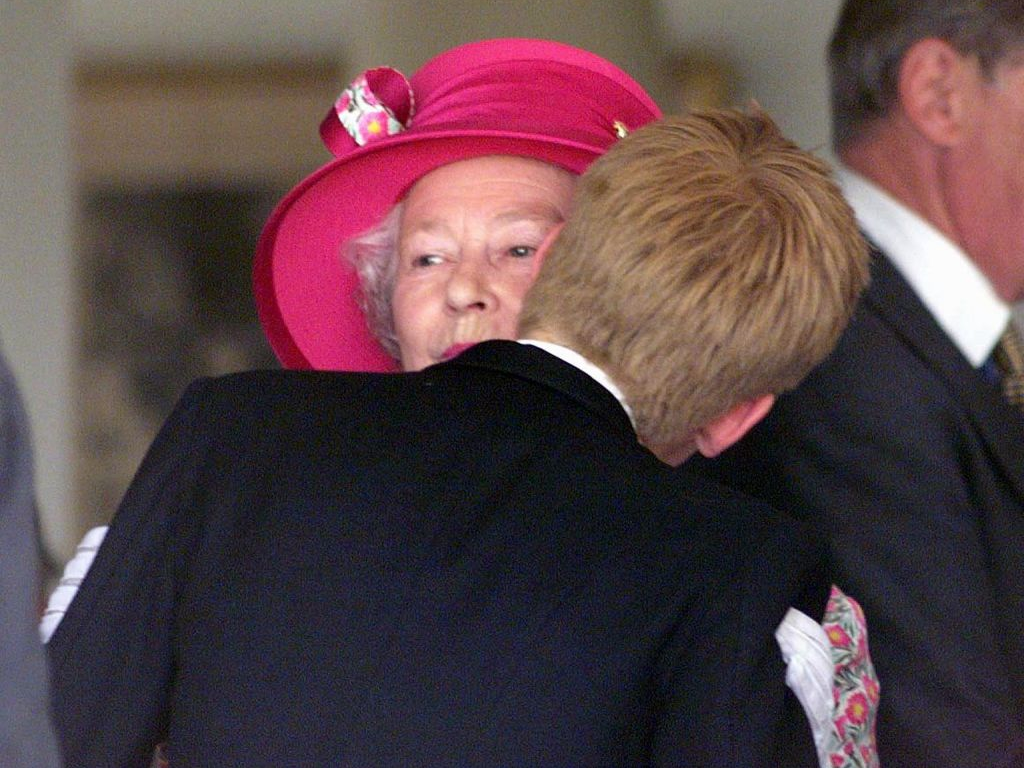 Elizabeth received a kiss from Harry at Guards Polo Club in 1999.

She plants kisses on them, as any grandmother would. 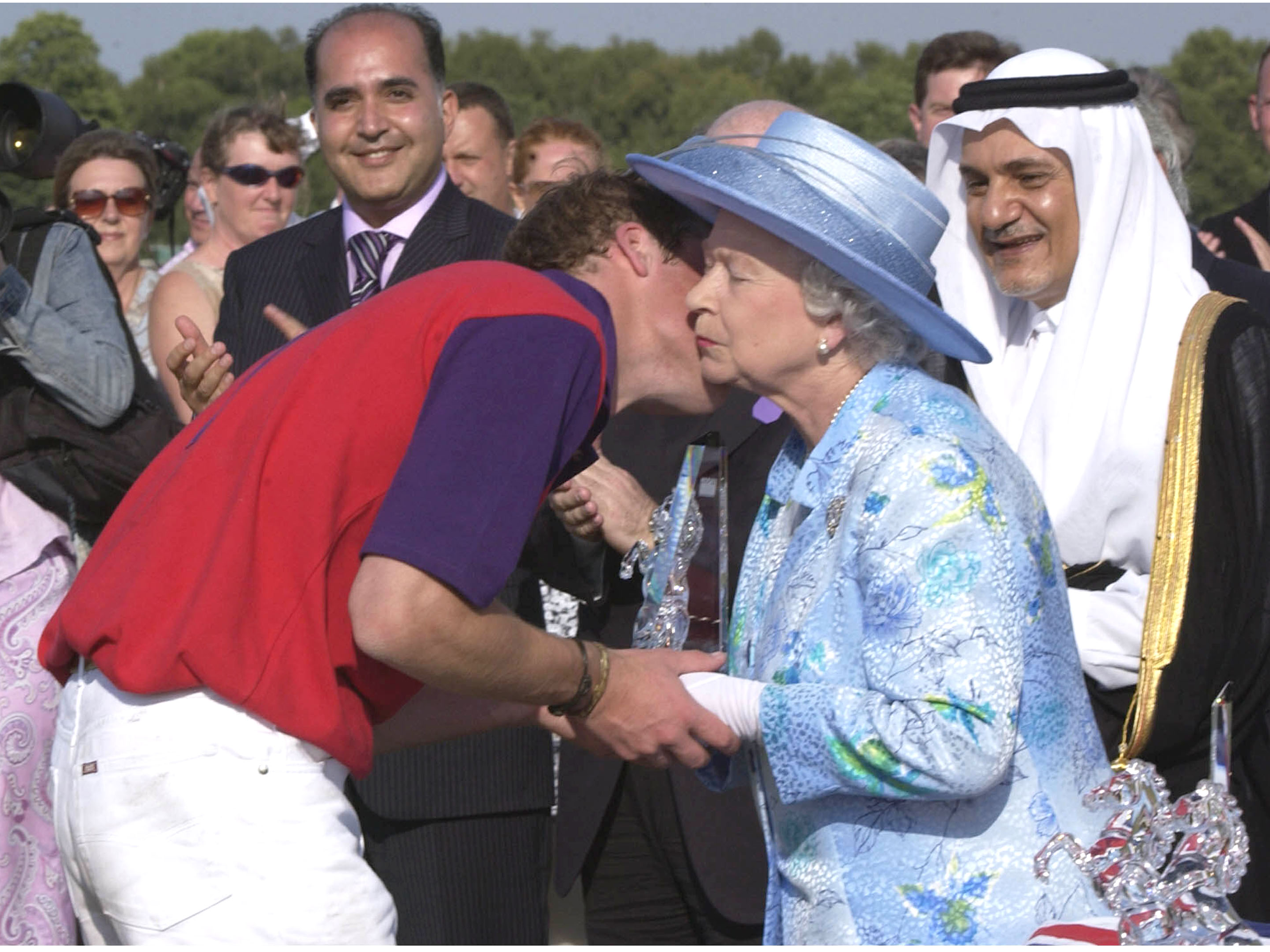 Elizabeth kissed William at a polo match at the Ascot Racecourse in 2004.

She takes pride in their accomplishments. 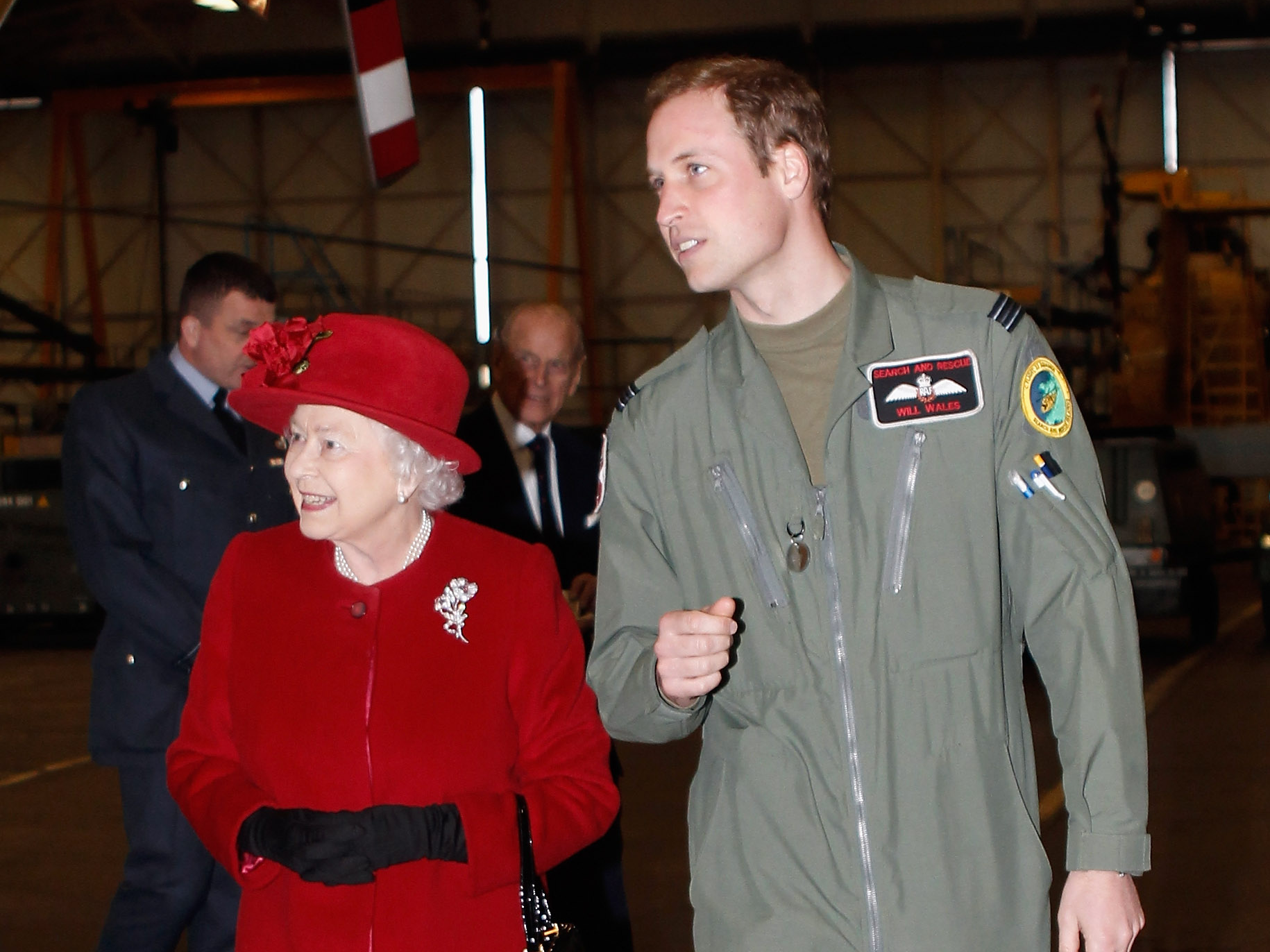 Elizabeth visited William at RAF Valley, where he was stationed as a search-and-rescue helicopter pilot, in 2011.

Her grandchildren enjoy spending time with her. 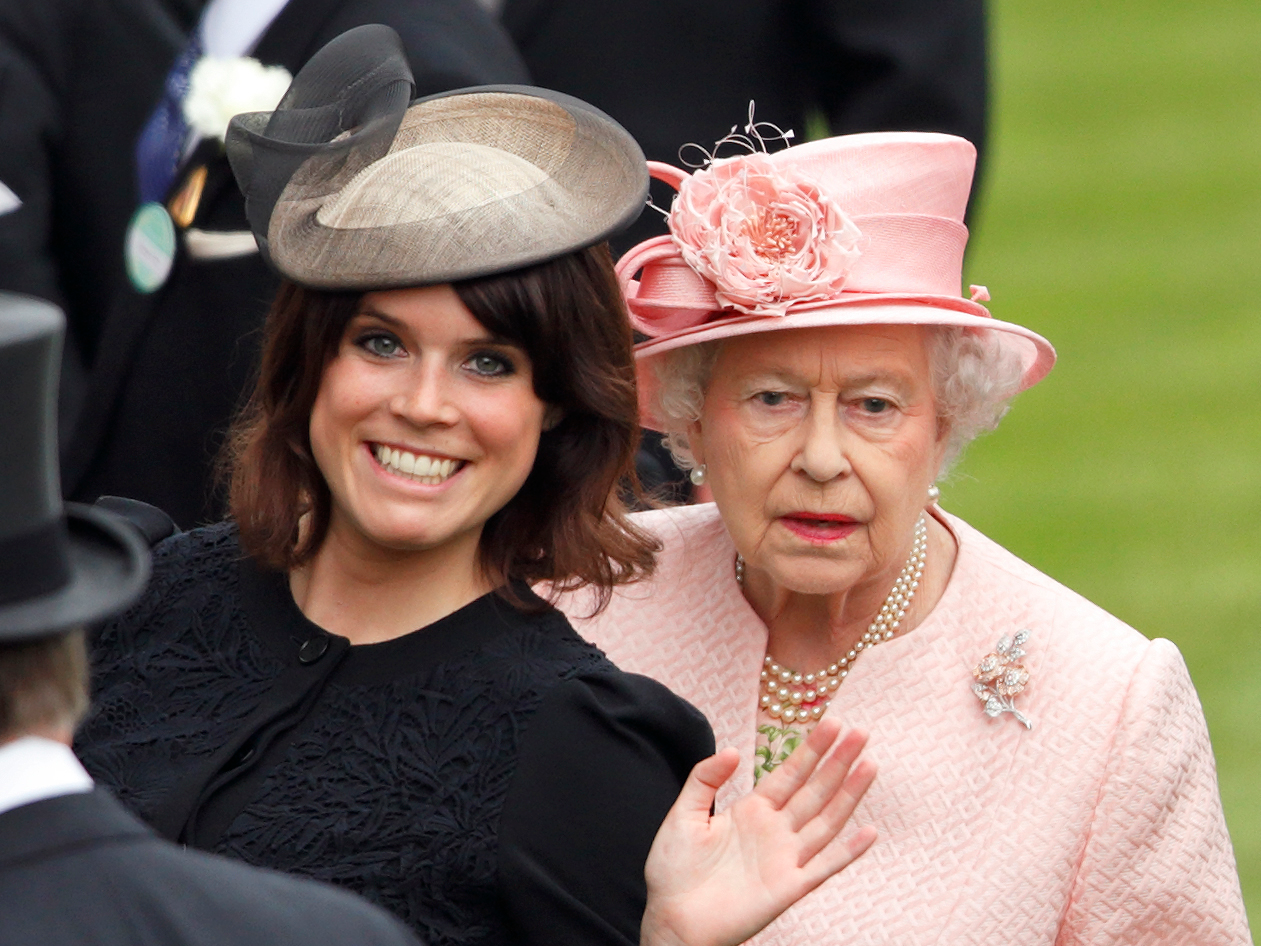 Princess Eugenie posed with Elizabeth at the Royal Ascot in 2013.

They can usually be spotted grinning at each other in pictures.

The Queen chatted with Prince Harry at the wedding of Lady Gabriella Windsor and Thomas Kingston.

William couldn’t quite keep a straight face when his grandmother walked through the Royal Military Academy parade. During the Sovereign’s Parade at the Royal Military Academy in Camberley, England, Elizabeth walked by William, whose face showed a hint of a smile.

She’s a fixture at their weddings. 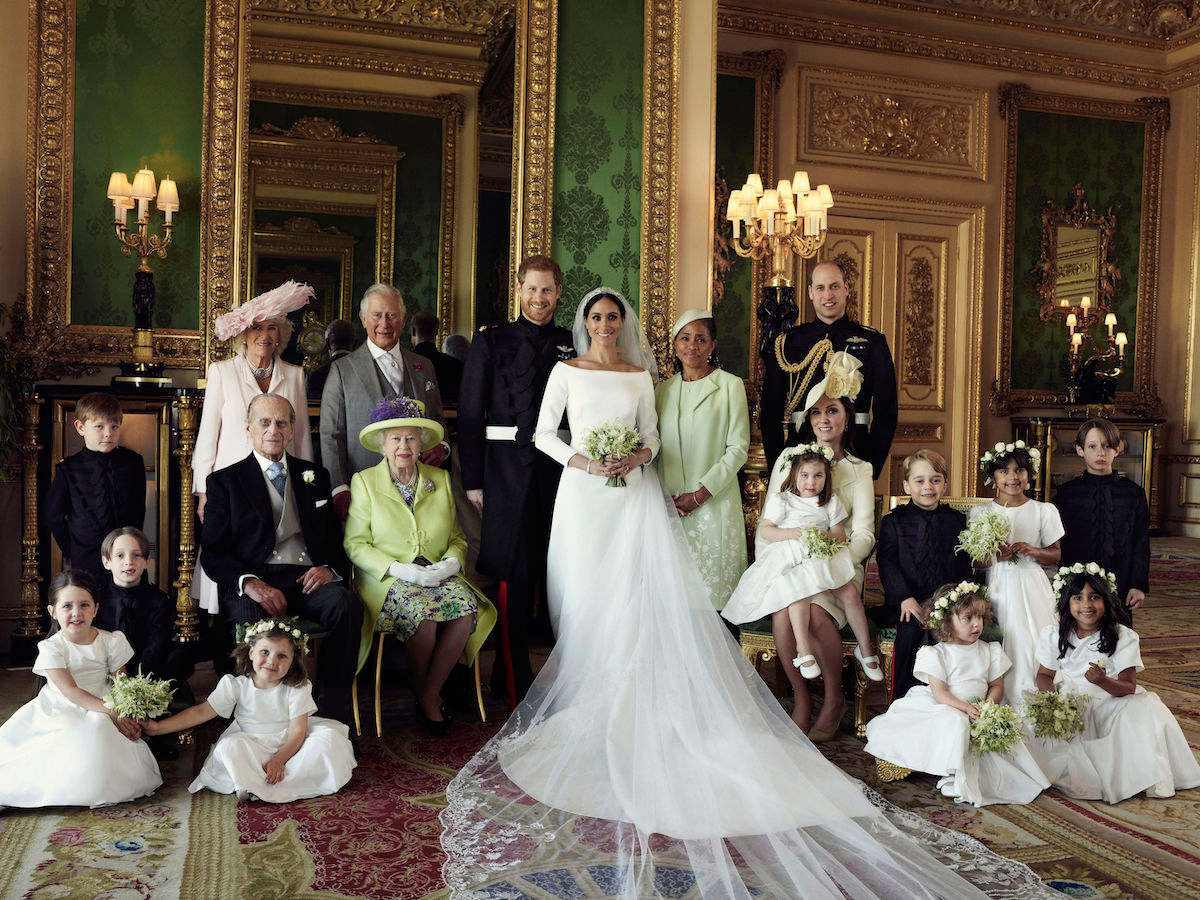 Elizabeth arriving at Harry and Meghan Markle’s wedding was one of the best moments of the day.

Of course, the Queen is also a fan of her grandchildren’s husbands and wives. 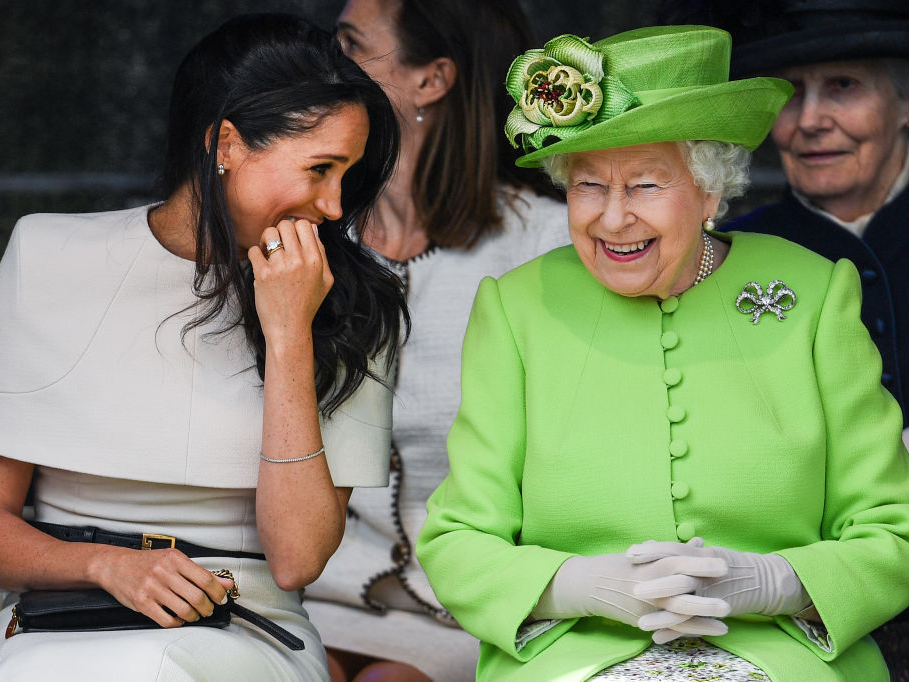 On their first royal engagement together, Elizabeth and Markle looked like best friends.

The Queen dotes on her great-grandchildren too. 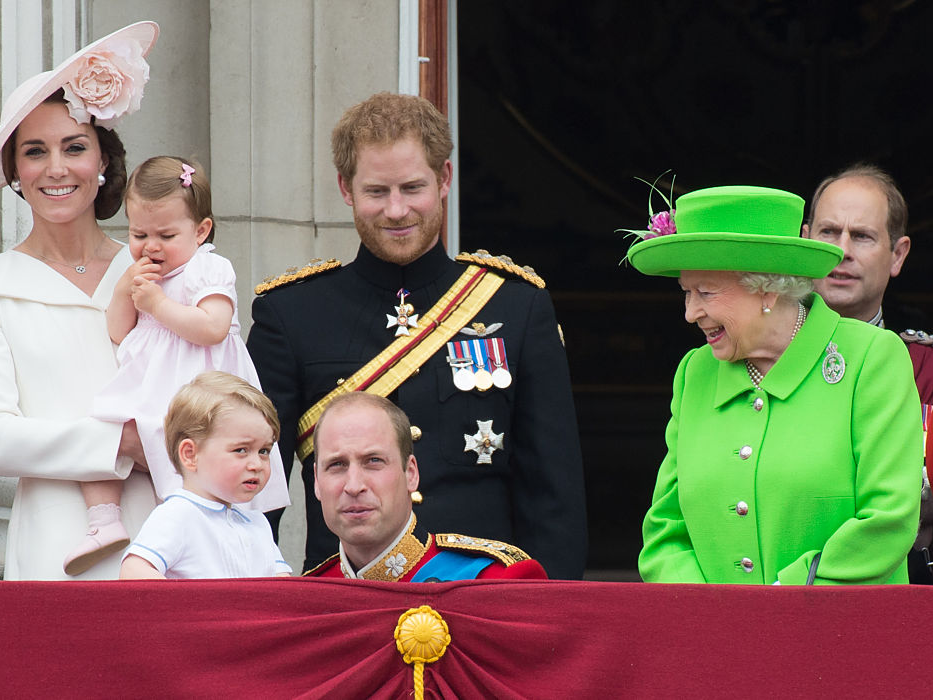 Zak Hussein – Corbis/Corbis via Getty ImagesElizabeth at Trooping the Colour.

At Trooping the Colour in 2016, Elizabeth was delighted by Prince George’s cuteness.

She attended Prince George’s christening in 2013. It was a four-generation gathering of the royal family at the Chapel Royal in London. 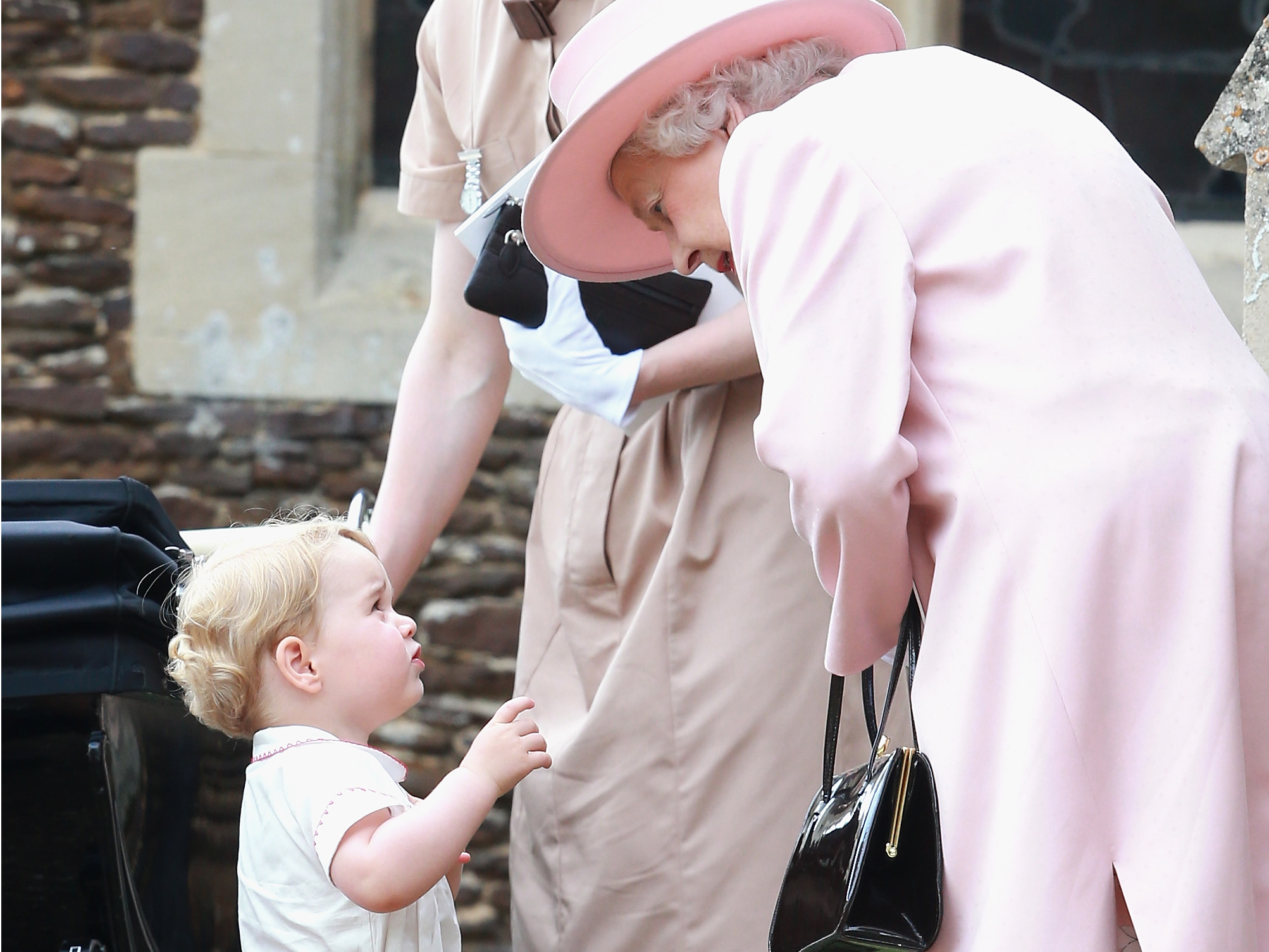 George needed her attention, though.