QAnon supporters believed marching on the Capitol could trigger 'The Storm,' an event where they hope Trump's foes will be punished in mass executions

SAUL LOEB/AFP via Getty ImagesJake Angeli, the ‘Q Shaman,’ was one of several rioters to confront police officers at the US Capitol on Wednesday.

Before she was fatally shot in the chaos that engulfed the Capitol on Wednesday, Ashli Babbitt wrote a cryptic social-media post.

“They can try and try and try, but the storm is here and it is descending upon DC in less than 24 hours….dark to light!” said a Twitter post written under Babbitt’s name, a post counter-extremism researchers believe is genuine.

“The Storm” is a resonant phrase at the heart of QAnon, the sprawling online conspiracy movement that baselessly claims that President Donald Trump is working to dismantle a network of elite child-abusers who run world affairs.

Adherents of the movement were on the front line in Wednesday’s violence. As seen in the photos below, a man wearing a top emblazoned with a Q symbol and slogan was among those confronting police officers in the Capitol. 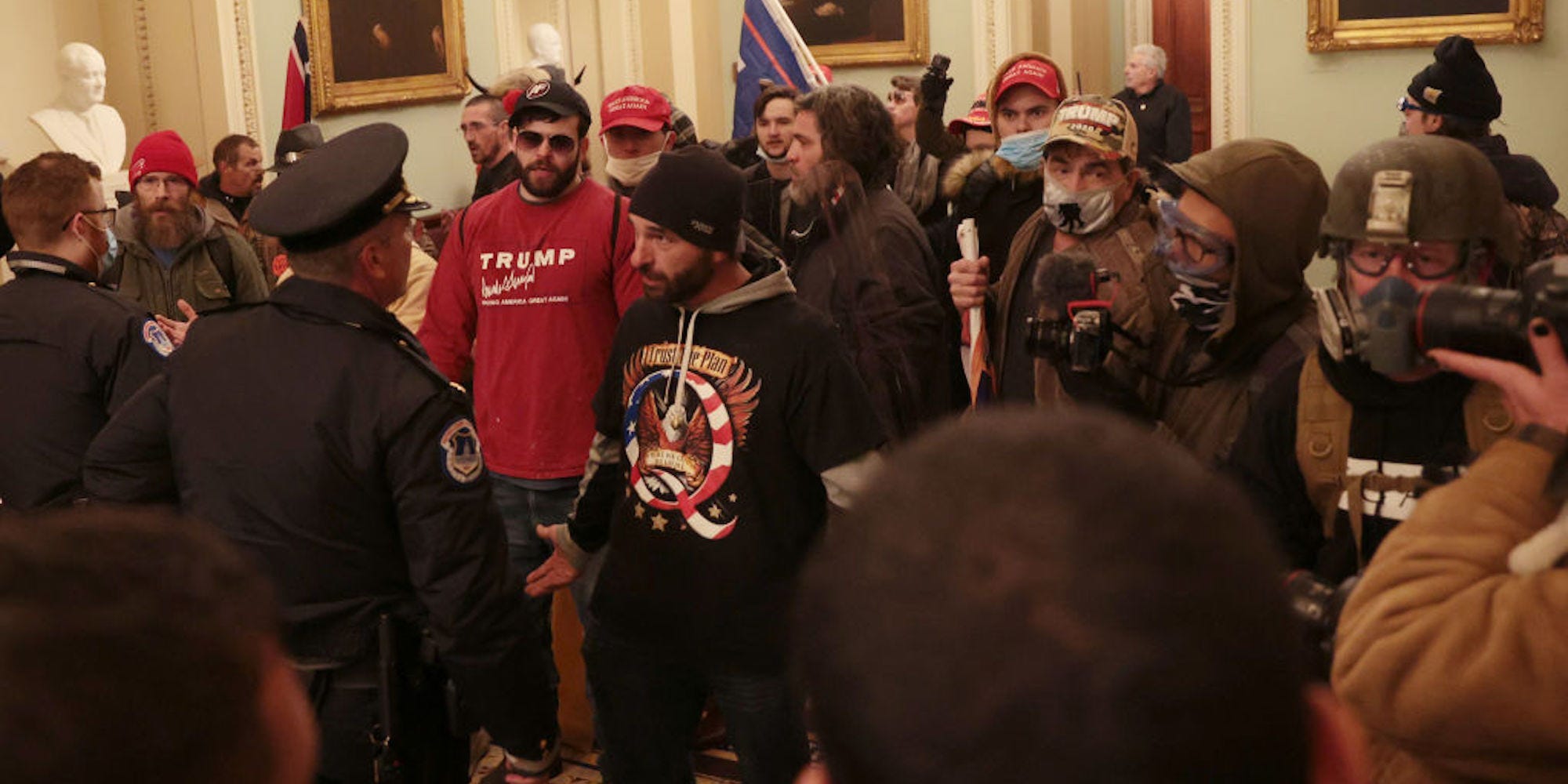 Win McNamee/Getty ImagesProtesters and police officers inside the US Capitol on Wednesday.

A QAnon influencer known as the “Q Shaman” played a prominent role in the unrest, and was pictured in his trademark horned helmet seated in the Senate chamber after rioters broke in.

January 6 had been billed by some in the movement as step toward the day they, like Babbitt, had long awaited.

They see The Storm as a day of violent retribution, when Trump’s enemies in the Democratic Party and those they as regard traitors in the Republican Party will face mass executions.

Posts like this weeks ahead of the protest sought to heighten expectation for what the day would bring.

Trump’s holding onto power on Wednesday was seen by the movement as a step toward that, a QAnon expert named Alex Bradley Newhouse told Insider.

Newhouse is a lead researcher of the online far right at the Middlebury Institute in Monterey, California.

QAnon supporters, he said, think events will lead “to the apocalyptic conclusion, The Storm, which theoretically involves mass arrests, military tribunals, and executions throughout the world.”

He explained that few QAnon adherents thought the day of reckoning itself had arrived Wednesday but that “even fewer accepted that Trump would not emerge victorious.”

He said many showed up expecting violence: “What I can say confidently is that right-wing groups knew they would be protesting on Jan. 6, they believed that a Trump loss could only be due to corruption, and they had no intention of going home without confrontation.”

Since Trump lost to Joe Biden in November’s presidential election, rage has simmered among hardline supporters of the president and far-right extremists.

As Trump has pursued his baseless claims that the election was stolen from him as a result of mass fraud, an increasingly close symbiosis formed between the president and QAnon.

Trump has retweeted key QAnon figures in support of his election-related conspiracy theories and enlisted the support of the QAnon-associated attorneys Lin Wood and Sidney Powell, while supporters of the movement have cheered on the president’s attempts to subvert the election.

Bipartisan US election officials, meanwhile, have said the election was the most secure in US history.

When Trump on Twitter called on supporters to gather on January 6 for a “wild” protest against the certification of Biden’s win, some saw it as the key step in the day of reckoning they had long been waiting for.

Cindy Otis, a former CIA analyst who is now a researcher at the Alethea Group, said the rally had been promoted for weeks on QAnon forums as well by other radical right-wing groups.

“Attendance at the rally was promoted in Q forums and groups, but it was shared by general Trump supporters as well as by violent domestic groups that call themselves “militias,”” she said.

“And that’s what we saw in photos, videos, and livestreams â€” well-known QAnon believers, neo-Nazi members, and far-right personalities storming the Capitol building.”

On the social-media app Parler, where many prominent QAnon influencers have congregated after being ousted from mainstream platforms, the hashtag #TheStorm was used by thousands of QAnon followers ahead of and during the riot.

Joe M, an influential QAnon account, promised in a Parler message Wednesday that “maximum penalties” were on the table for Trump’s foes.

"Maximum penalties are now on the table"
"People are fucking pissed. And it's 100% justified"
"The storm was always gonna be ugly"
"Patience is no longer a realistic explanation" pic.twitter.com/Qp6T8uY1Dn

On Twitter, QAnon supporters in the run-up to Wednesday’s protest were eagerly anticipating The Storm.

But Trump’s takeover Wednesday failed to materialise. After protesters were ousted from Capitol by a hugely reinforced police presence, many took to social media to question what went wrong â€” and asked what the president had in store to turn the tables.

The movement has been resilient in the past when its conspiracy theories were proved false, and Wednesday was no different.

Otis defined QAnon as a “choose your own adventure” ideology, which “encourages individual discovery, interpretation, and analysis of events and ideas.”

“Some saw yesterday as the start of the event they call ‘The Storm’ and are encouraging believers to hold the line. I’ve seen other members across Q forums begin to lose hope in the conspiracy because they are seeing the reality â€” that the predictions and claims never actually happen,” she told Insider.

Experts believe that when Trump leaves office in a matter of weeks, it could inspire violence from QAnon supporters.

“QAnon’s influence in broader right-wing circles is likely to continue waning, but there exists a core base of religious-like support for QAnon that will likely last throughout the Biden administration,” said Jared Holt, a research fellow at the Atlantic Council’s Digital Forensic Research Lab. “Conspiracy-driven extremism, generally, will likely intensify.”

“QAnon supporters have largely trusted Trump to validate their outlandish beliefs and eventual act on them. As Trump exits office and the political reality becomes undeniable, there is a risk that some believers could act out in ways that may include violence.”

Wood, the attorney who has supported Trump’s bid to overturn Biden’s win in Georgia, on Parler reassured supporters that it was far from over â€” even after Congress returned early Thursday and certified Biden’s win.

“Time for rest. I had to stay up to watch the conclusion of the greatest attempted theft in history. Now it is a completed crime,” he wrote.

“Many traitors will be arrested & jailed over the next several days. President Donald J. Trump will serve 4 more years!!!”