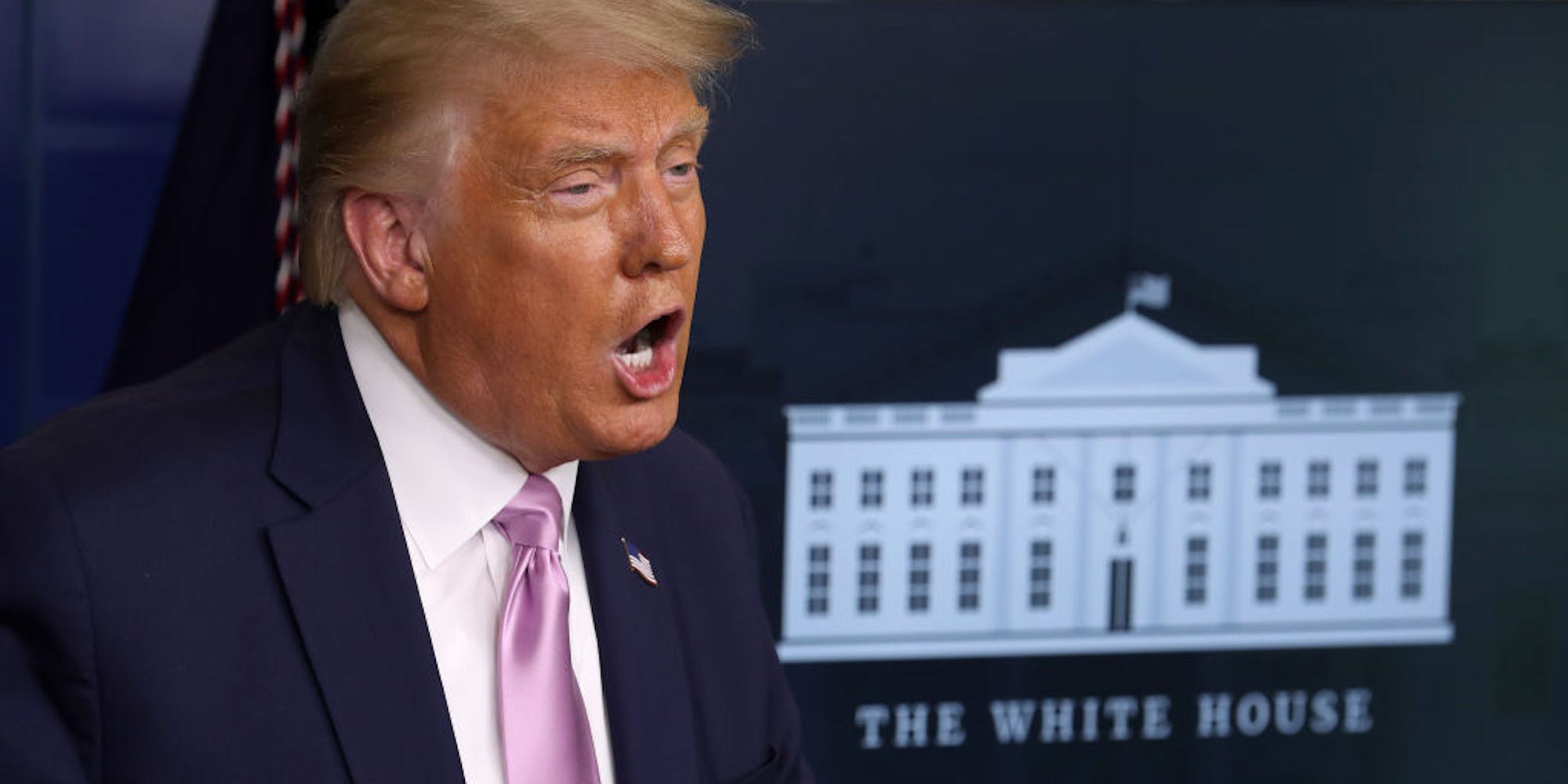 Chip Somodevilla/Getty ImagesPresident Donald Trump at a news conference in the White House on Wednesday where he was asked about QAnon.

Supporters of the far-right QAnon conspiracy theory are celebrating after President Donald Trump explicitly acknowledged and praised them in public for the first time.

Speaking at a White House press briefing, Trump responded to a question asking about his views on the movement.

QAnon posits that Trump is on a secret mission to dismantle a network of child abusers involving top Democrats, “deep state” agents, and Hollywood stars. There is no evidence this is true.

The movement was identified as a domestic-terrorism threat by the FBI in documents obtained by Yahoo News last year.

QAnon supporters have been tied to a series of violent crimes around the country, according to the civil-rights nonprofit Southern Poverty Law Centre.

In late July, thousands of pro-QAnon accounts were removed from Twitter. Facebook followed suit this week, banning thousands of accounts and groups.

But on fringe platforms such as Gab and Parler, where many supporters have regrouped, they were jubilant following a moment they seemed to have long anticipated.

“Trumps answer yesterday has me grinning like a madman, even hours later. It’s been a great honour observing and participating in this movement!” one supporter wrote on Gab, an online gathering space used often by the far right.

“It’s not over yet but I just had to share my feelings on this watershed happening.”

On the Parler platform, another supporter wrote: “‘I’ve just heard these people love our country’ – Donald J. Trump on ‘The #QAnon Movement’ Hold tight, anons. The best is yet to come.”

Other supporters celebrated the news with memes. 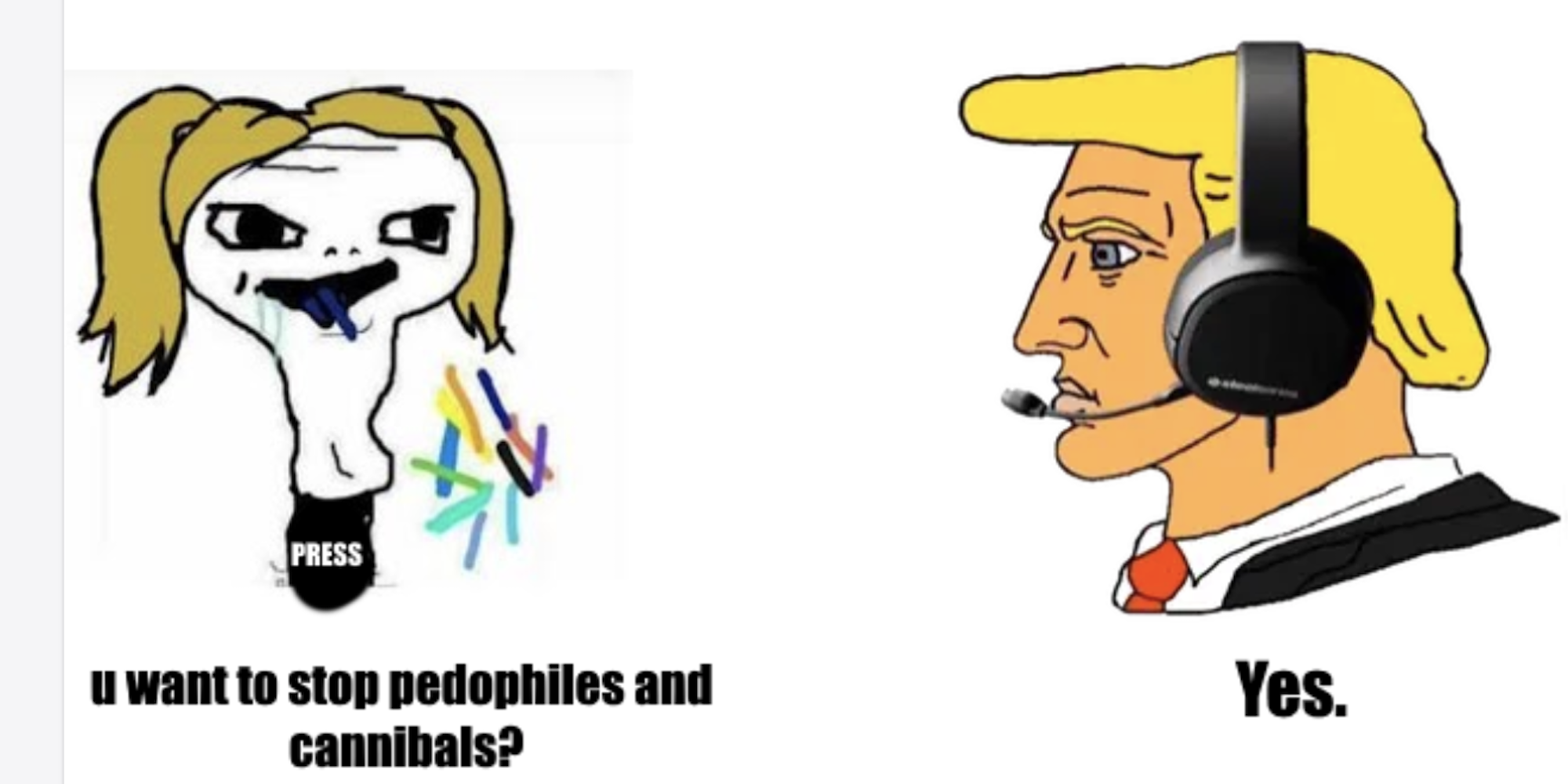 Experts have warned that Trump’s comments will further embolden the movement and be interpreted as proof that its elaborate theories are true.

Cindy Otis, a former CIA analyst and disinformation expert, told Business Insider: “In general, QAnon believers across platforms largely saw the comments on the same day that Facebook announced takedowns and restrictions of Q content as confirmation of and support for the movement.”

She continued: “This perception is likely to fuel and embolden members, as well as pique the interest of people who have been researching Q claims but otherwise had not yet subscribed to the group’s beliefs.”

I just want to be very clear about this: not only is POTUS here saying QAnon seems fine because they “like him” — he is explicitly **encouraging** the radicalization of QAnon toward violent acts.

From the WH podium. This is stunning. https://t.co/zcSyvd02He

For about a year, Trump and top officials have been giving tacit signs of approval of the movement, sharing tweets by pro-QAnon accounts and slogans associated with the movement.

Business Insider in July reported that some of Trump’s most popular slogans, including the #Obamagate hashtag, were being sourced from a large network of QAnon accounts on Twitter.

After the president used the slogans, the network then repeated and further amplified his messages.

At the time, neither the White House nor the Trump campaign would comment on the president’s apparent embrace of QAnon. Business Insider has sent further requests for comment in light of Trump’s statement Wednesday.

Speaking with Business Insider in July, the University of Manchester professor Peter Knight, an expert on US conspiracy theories, said there was a large overlap between QAnon and Trump’s traditional base. He said encouraging the movement would be to the president’s electoral advantage.

The QAnon movement emerged in 2017 in on the messaging boards 4Chan and 8Chan, when a user began posting cryptic messages claiming to be a US government official with “Q-level” clearance alleging a child-abuse plot Trump was seeking to dismantle.

Trump supporters soon began to show up at rallies carrying signs and wearing clothing emblazoned with Q slogans, and the movement has seeped into the congressional GOP.

Media Matters for America has documented that 70 Republican candidates have expressed support for QAnon.

On August 12, Marjorie Taylor Greene won the party primary for a safe GOP seat in Georgia, meaning she is likely to become the first supporter of the movement elected to Congress.