QAnon followers are giving up on their conspiracy theory after Biden's inauguration: 'Is anyone still holding the line?' 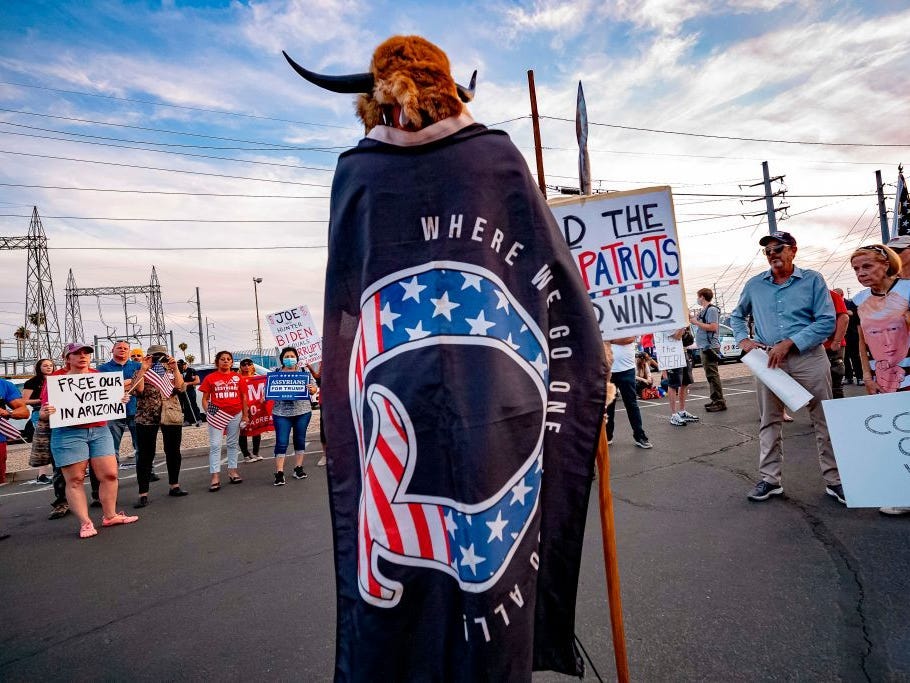 Olivier Touron/AFP via Getty ImagesJake Angeli, known as the ‘Q Shaman,’ wrapped in a QAnon flag at a protest in Phoenix on November 5.

One hour after President Joe Biden was inaugurated in Washington, DC, on Wednesday, QAnon conspiracy-theory chat rooms had an overwhelming â€” albeit familiar â€” sense of hopelessness.

“What are we waiting for now?” one comment in a QAnon Telegram channel said. “Is anyone still holding the line?” said another.

“So, was Q just one big lie and psyop that I foolishly followed and believed for over 3 years?” another user said.

In a QAnon message board, the discussion was similarly bleak: “Guys and gals, I’m losing my everloving mind right now. Is this really happening? Was this part of the plan?”

Wednesday was the final chance at redemption for QAnon, a baseless far-right conspiracy theory alleging that former President Donald Trump was fighting a “deep state” cabal of pedophiles and human traffickers.

Many believers of QAnon had anticipated that Biden would be arrested at his inauguration, or that Trump would do something, anything at all, to prevent his successor from taking office.

But in the end, Trump said goodbye, danced to the “YMCA,” and flew to Florida, and Biden became president.

Finally, QAnon followers appeared to realise en masse that with Biden inaugurated, Trump’s rule and the fantasy they’d created around it had come to an end. 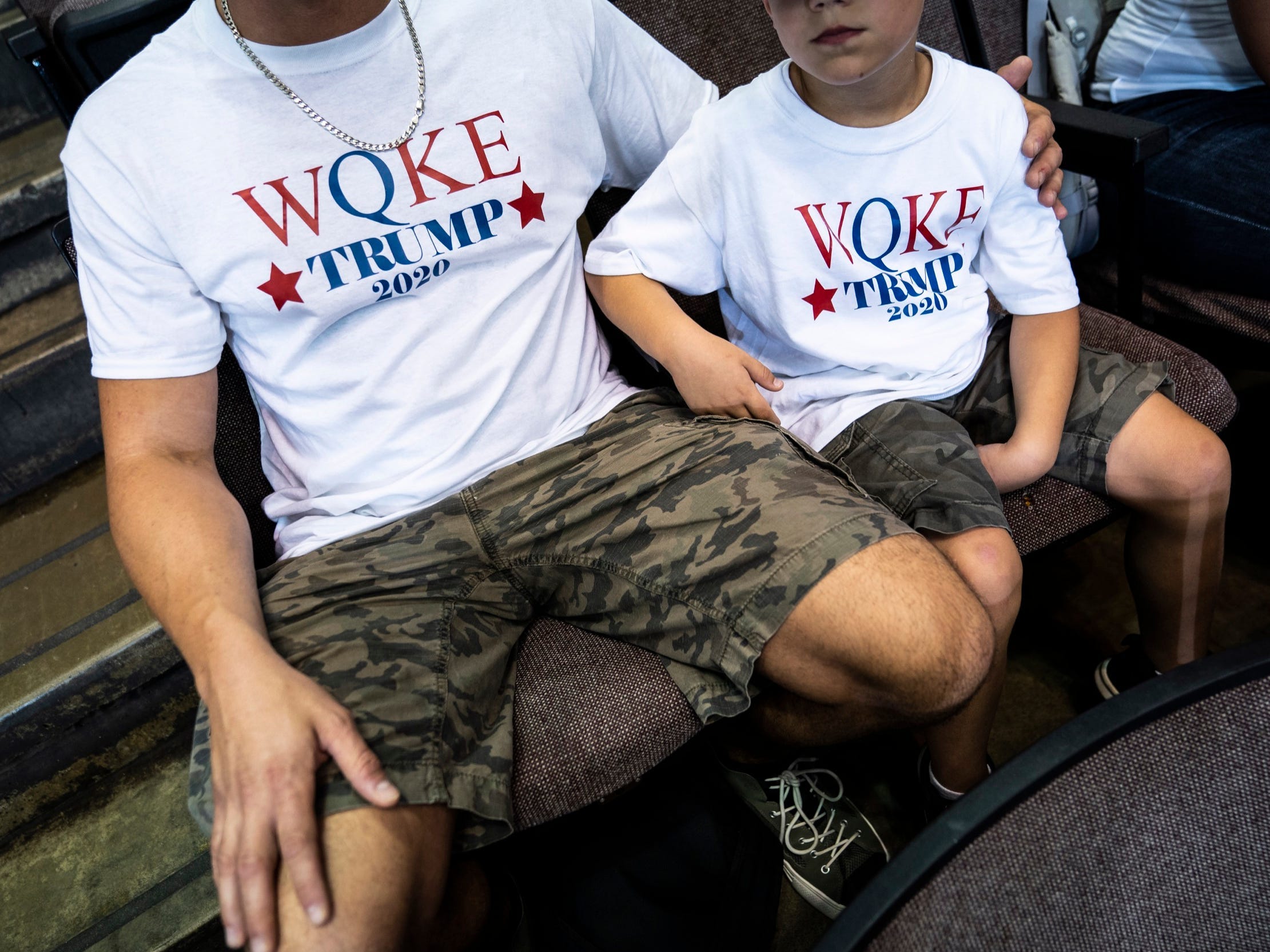 Jabin Botsford/The Washington Post via Getty ImagesA father and son in QAnon shirts at a ‘Keep America Great’ rally in Cincinnati on August 1, 2019.

QAnon influencer Ron Watkins appeared to throw in the towel

Ron Watkins, who had for years facilitated the spread of QAnon, echoed sentiments of resignation elsewhere in the QAnon movement.

Watkins is the former administrator of 8kun (formerly 8chan), the fringe message board where “Q,” the anonymous leader of QAnon, posts cryptic messages. After two months of fighting to overturn Biden’s election win with claims of voter fraud on One America News Network, he finally gave up.

“We gave it our all. Now we need to keep our chins up and go back to our lives as best we are able,” Watkins said on Telegram, where he has more than 120,000 followers. “We have a new president sworn in and it is our responsibility as citizens to respect the Constitution regardless of whether or not we agree with the specifics or details regarding officials who are sworn in.”


Read more:
The QAnon conspiracy theory and a stew of misinformation fuelled the insurrection at the Capitol

Extremism researchers have questioned whether Watkins or his father, Jim, who owns 8kun, were somehow associated with Q. The younger Watkins had in many ways become the de facto leader of QAnon, as Q has not posted on 8kun since December 8.

QAnon has become increasingly popular in the past year 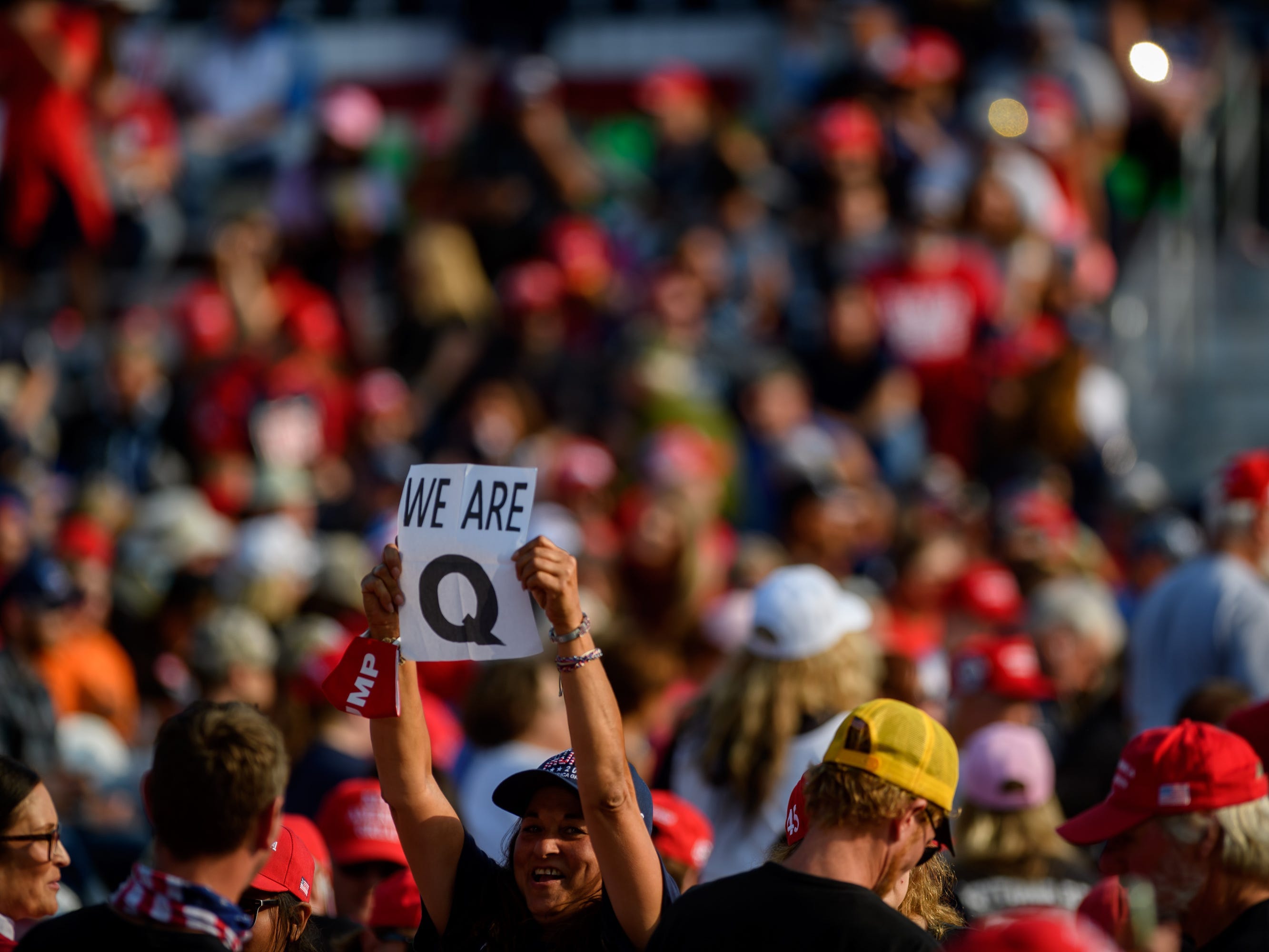 Jeff Swensen/Getty ImagesA person with a QAnon sign at a rally.

The conspiracy theory began on fringe message boards in 2017 when an anonymous figure called “Q Clearance Patriot” claimed to have high-level government security clearance and said Hillary Clinton would soon be arrested for involvement in a child-trafficking ring. Three far-right activists noticed the message on 4chan and spread it, NBC News reported in 2018.

Clinton, of course, was never arrested. But the allegation that Democrats and powerful figures â€” which eventually expanded to include Chrissy Teigen and Oprah Winfrey â€” were involved in human trafficking has been central to what experts call the “big tent” conspiracy theory, which can adapt and change as needed.

While it’s difficult to track the number of people who believe in a conspiracy theory like QAnon, Facebook documents obtained by NBC News in August indicated that there were millions of users in QAnon groups.

In 2020, the movement migrated from the fringes of the internet to mainstream social-media platforms. It became hugely popular thanks to its association with COVID-19 misinformation and anti-human-trafficking sentiment. 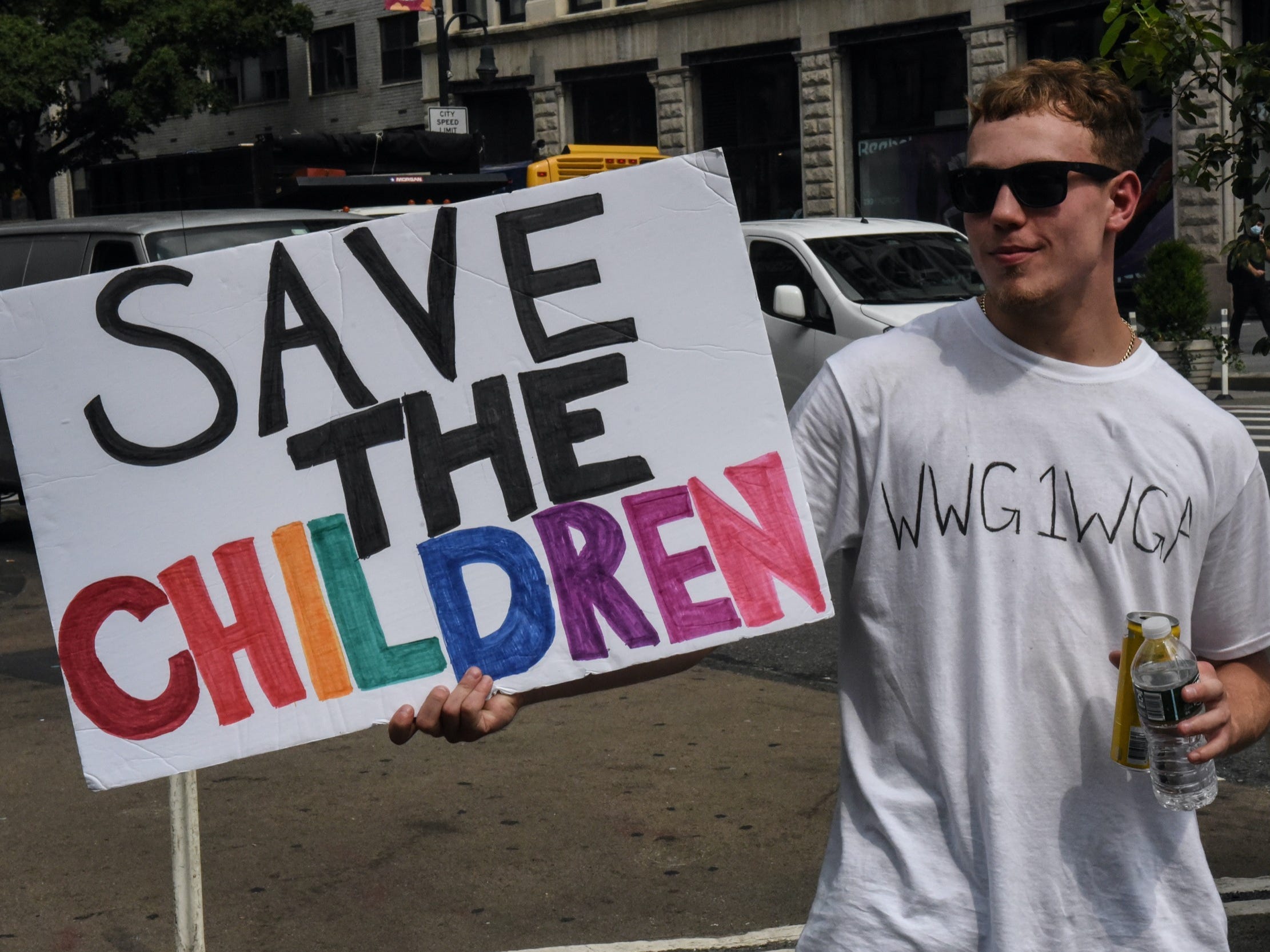 REUTERS/Stephanie KeithA person wearing a T-shirt that says ‘WWG1WGA,’ a QAnon slogan, at a ‘Save the Children’ march and rally in New York City on August 12.

Suddenly, last spring, QAnon was everywhere. Elements of the theory were spread by lifestyle and parenting influencers on Instagram. Marjorie Taylor Greene was elected to Congress after espousing QAnon beliefs. Cable-news networks were congratulating the theory’s discoveries. And even the president of the United States flattered believers.

Data published on Twitter in July by Marc-AndrÃ© Argentino, a Ph.D. candidate at Concordia University researching extremism, indicated that of 74.2 million Facebook interactions in QAnon groups since the conspiracy theory’s inception, nearly 50 million took place from March to July.

With the “Stop the Steal” campaign alleging that Trump had actually beaten Biden in the election, QAnon had another boost, and the movement shifted its focus to a new charge. Many QAnon believers, including Jake Angeli, the infamous “QAnon Shaman” or “Q Shaman,” participated in the pro-Trump insurrection at the Capitol on January 6.

Some QAnon believers aren’t ready to give up yet 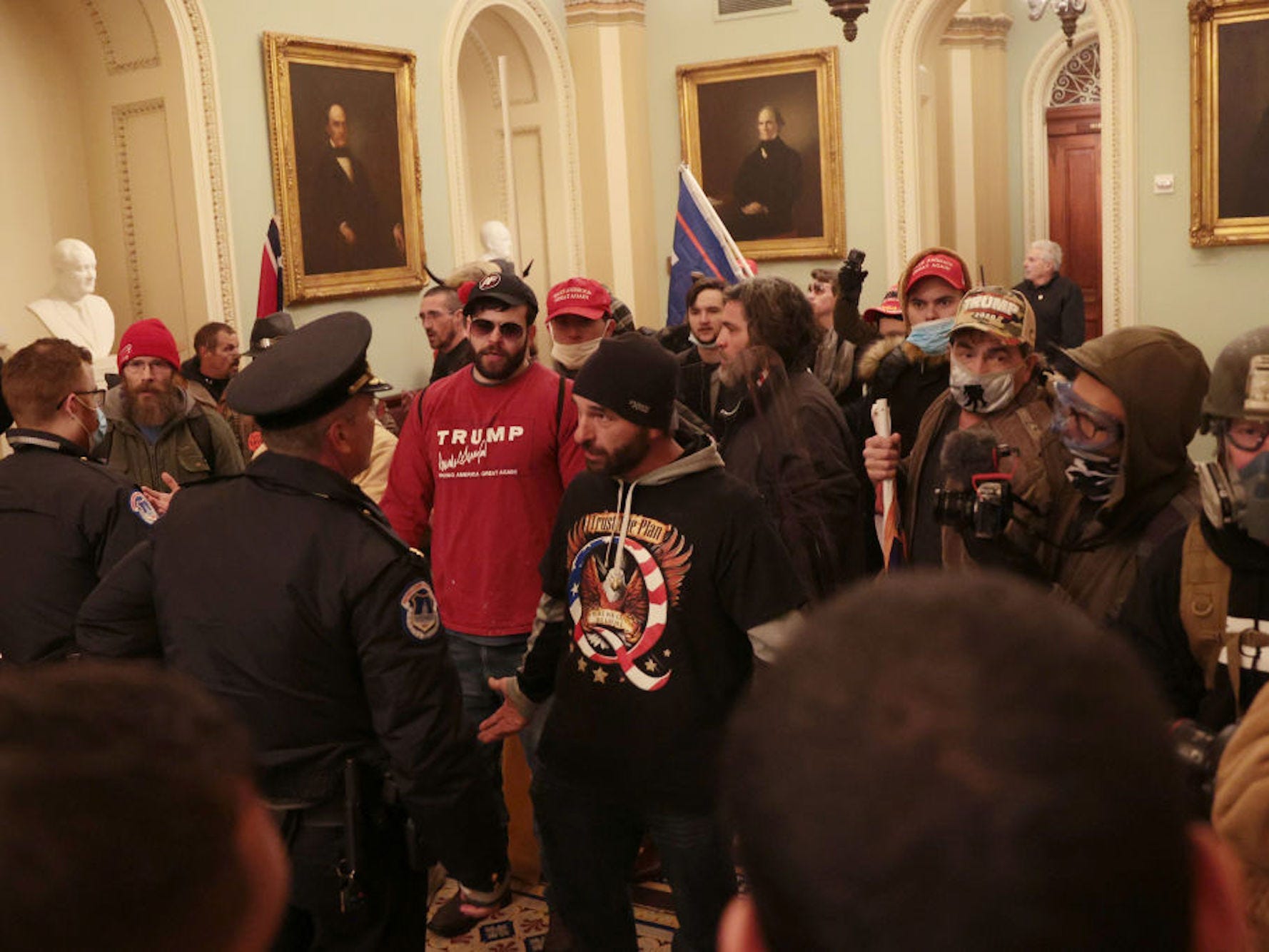 Win McNamee/Getty ImagesProtesters and Capitol Police officers inside the US Capitol on January 6.

Whether QAnon believers would simply shift their expectations and keep faith in something so clearly baseless in the wake of Biden’s inauguration has for months been top of mind for researchers.

In November, after Biden won the election, Joan Donovan, the research director of the Shorenstein Centre on Media, Politics, and Public Policy at Harvard University, told Insider in an interview that the movement would be able to survive after Trump.

QAnon is “able to incorporate breaking-news events into its own storyline so no matter what happens to Trump the theory will adapt and the network will shift,” Donovan said.

Despite the sense of sadness, some of the movement’s top influencers encouraged believers to stay focused on Wednesday. Praying Medic, a key figure in spreading the conspiracy theory, highlighted for his 89,000 Gab followers on Wednesday morning that Trump had said he hoped this would not be a “long-term goodbye,” indicating some hope for the future.

Praying Medic also shared on his Gab account a theory, popular in QAnon chat rooms, that the 17 American flags behind Trump during his final address were sending a message of some kind, as Q is the 17th letter of the alphabet.


Read more:
‘Buy more guns and ammo’: The far right is using messaging apps like Telegram to organise after the Capitol riot

A Telegram user in a smaller QAnon channel with roughly 6,000 subscribers said: “If you want to give up now, you know where the door is. I wouldn’t blame you at this point, but I’m standing strong in my faith in God, and in Trump and the team.” That message was shared in a larger QAnon group with about 10,900 members.

Connecting belief in the conspiracy theory to Christianity has become huge for the QAnon crowd. Lin Wood, the QAnon-believing attorney involved in Trump’s legal battles against the election result, shared a passage from the Bible with his 524,000 Telegram subscribers: “For we walk by faith, not by sight.”

That notion of walking by faith rather than sight was made clear on Wednesday in a QAnon chat room where moderators warned users that they’d ban anyone sharing negative posts. “This IS NOT over,” the moderator wrote. “HAVE patience.”