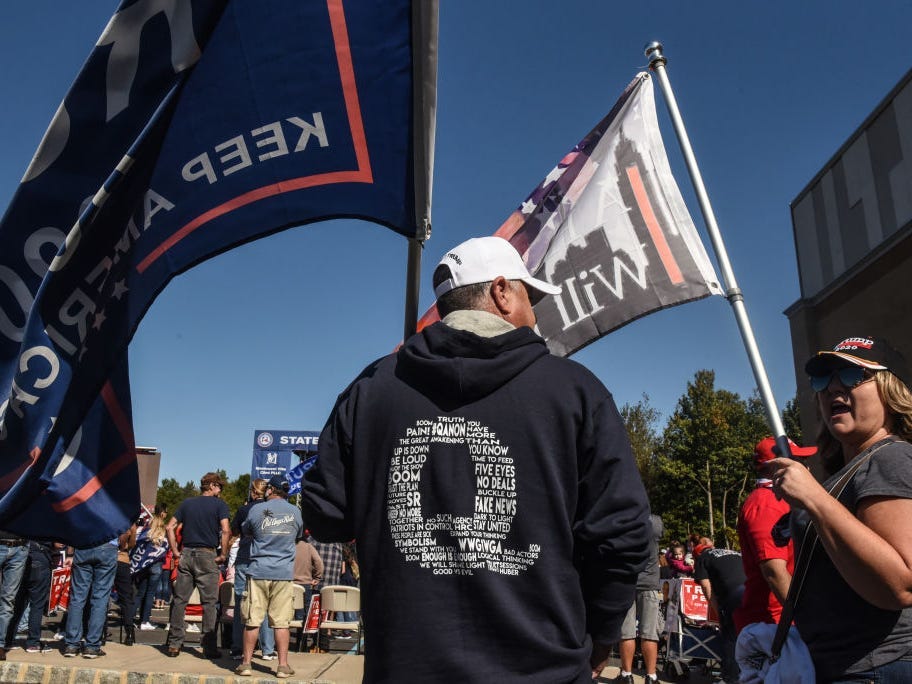 Stephanie Keith/Getty ImagesA person wears a QAnon sweatshirt during a pro-Trump rally on October 3, 2020 in the borough of Staten Island in New York City.

The QAnon conspiracy theory movement continues to balloon worldwide, and many Americans are finding ways to capitalise on followers’ dedication by developing Q-themed products and apparel.

Insider has identified six trademark applications filed with the US Patent and Trademark Office (USPTO) between October 2018 and October 2020 related to the QAnon conspiracy theory. Four of the six were dismissed by the office, while two await responses.

QAnon is the baseless far-right conspiracy theory that claims President Trump is secretly fighting a “deep state” cabal of satanic pedophiles and cannibals that has grown in popularity over the last few years. QAnon USPTO applications include attempts to trademark the name itself, in addition to terms linked to the theory.

A Texas woman who asked not to be named applied to trademark the term “WWG1WGA,” which stands for the movement’s slogan, “Where we go one, we go all,” in July. The woman told Insider that she sought the trademark to “protect it for the collective.”

That application, which is still pending, specifies its intended usage for a variety of clothing items, including hats, shirts, baby clothes, hunting attire, and workout clothes.

The pending applications represent the possibility of a government body legitmising the QAnon conspiracy theory through their approval, despite the FBI warning that QAnon could become a domestic terrorism threat.

A spokesperson for the USPTO told Insider that the office cannot comment on applications.

The US Patent and Trademark Office has refused QAnon trademark applications, but more await decisions 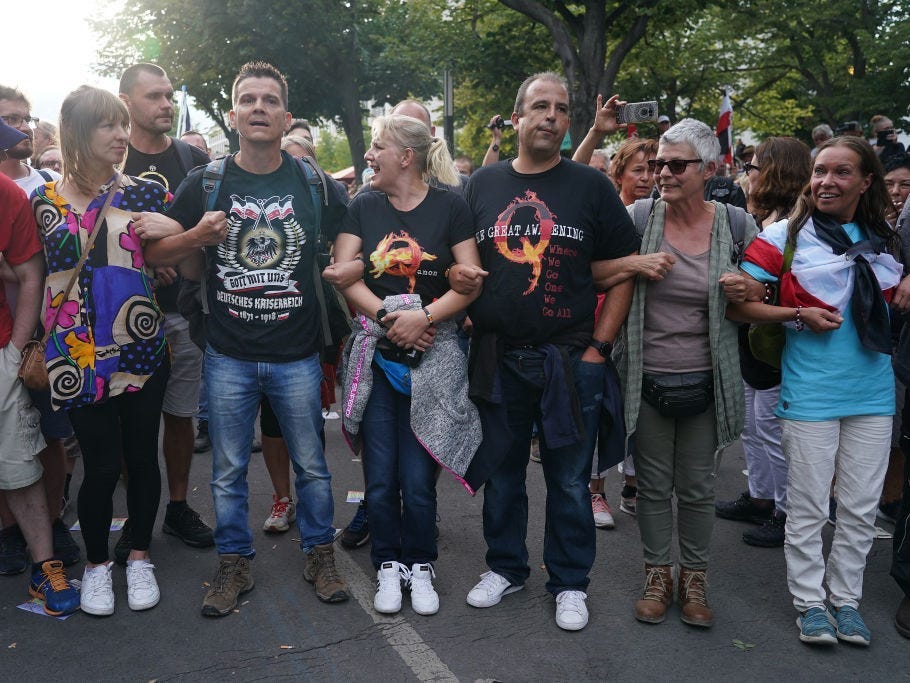 Some QAnon trademark seekers are open about their applications being financially motivated.

Napoleon Yancey, the attorney representing an applicant for the “QAnon” trademark, told Insider that his client wished to remain anonymous, and “his ideals do not align with the QAnon organisation.”

Yancey said that the applicant “has identified a need in the market and is moving on the opportunity to provide goods to this segment of the market.” That application, which was first reported by Gian Volpicelli for Wired UK, is still pending.

A previous attempt to lock in profits from the movement’s name has already been denied. Jason Stringo of Victoria, Texas, applied to trademark “Q anon” in October 2018, relatively early on in the conspiracy theory’s genesis. USPTO documents show that Stringo intended to embellish pants, hats, footwear, and shirts with the term.

The USPTO denied the application because the term would “merely convey an informational message” related to the conspiracy theory movement, rather than being identifiable and distinguishable as a clothing company, documents show.

Beyond the name of the conspiracy theory itself, people have also filed trademark applications for QAnon-linked phrases 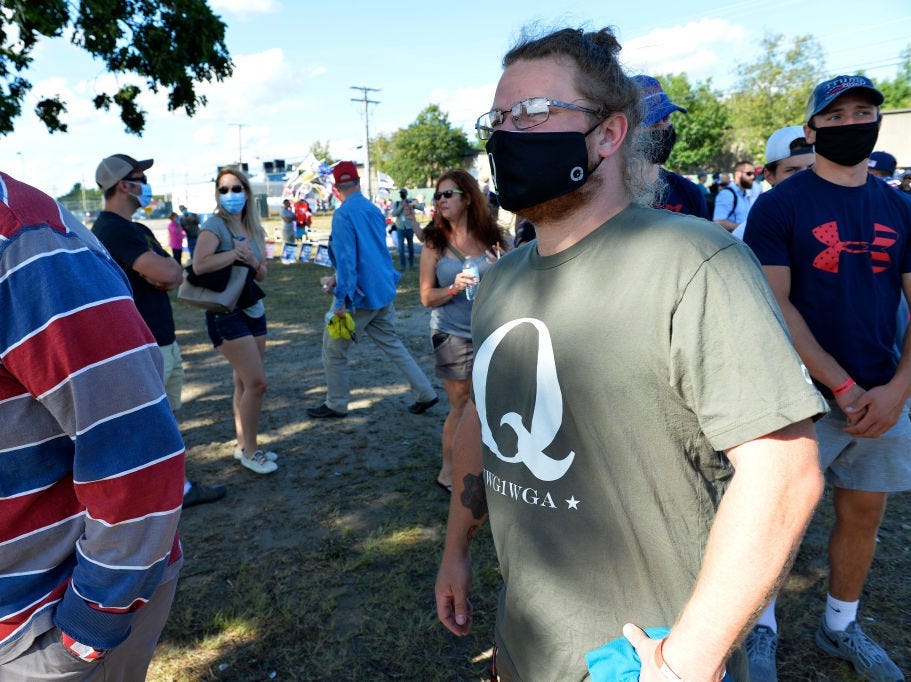 Joseph Prezioso/AFP/Getty ImagesA man wearing a QAnon shirt waits in line to access the tarmac at the Pro Aviation hangar where Donald Trump holds a Campaign Rally, the day after the end of the Republican National Convention, at Manchester airport in Londonderry, New Hampshire on August 28, 2020.

In addition to “Q anon,” Stringo applied to trademark “WWG1WGA,” in November 2018. The application was denied under the same grounds as his previous attempt.

USPTO documents show that Stringo applied for both trademarks by using Trademark Engine, a company that helps small-business owners file trademark applications. Stringo and a representative for Trademark Engine did not respond to requests for comment.

The movement’s full slogan was also submitted as a trademark application, USPTO documents show. A man named Jason Gregg, whose application listed an address in Guam, applied to trademark “Where We Go One, We Go All” in October 2018.

The email address supplied with Gregg’s application appears to be his professional email associated with his role as the vice president of Island Strong, a wellness product retailer with an emphasis on supplements. The application was refused.

In its January 2019 refusal notice, the office said that “this term or phrase is a commonly used message that is a main catchphrase of the QAnon movement” and “consumers are accustomed to seeing this message used in ordinary language by many different sources.”

Gregg did not immediately respond to Insider for comment. 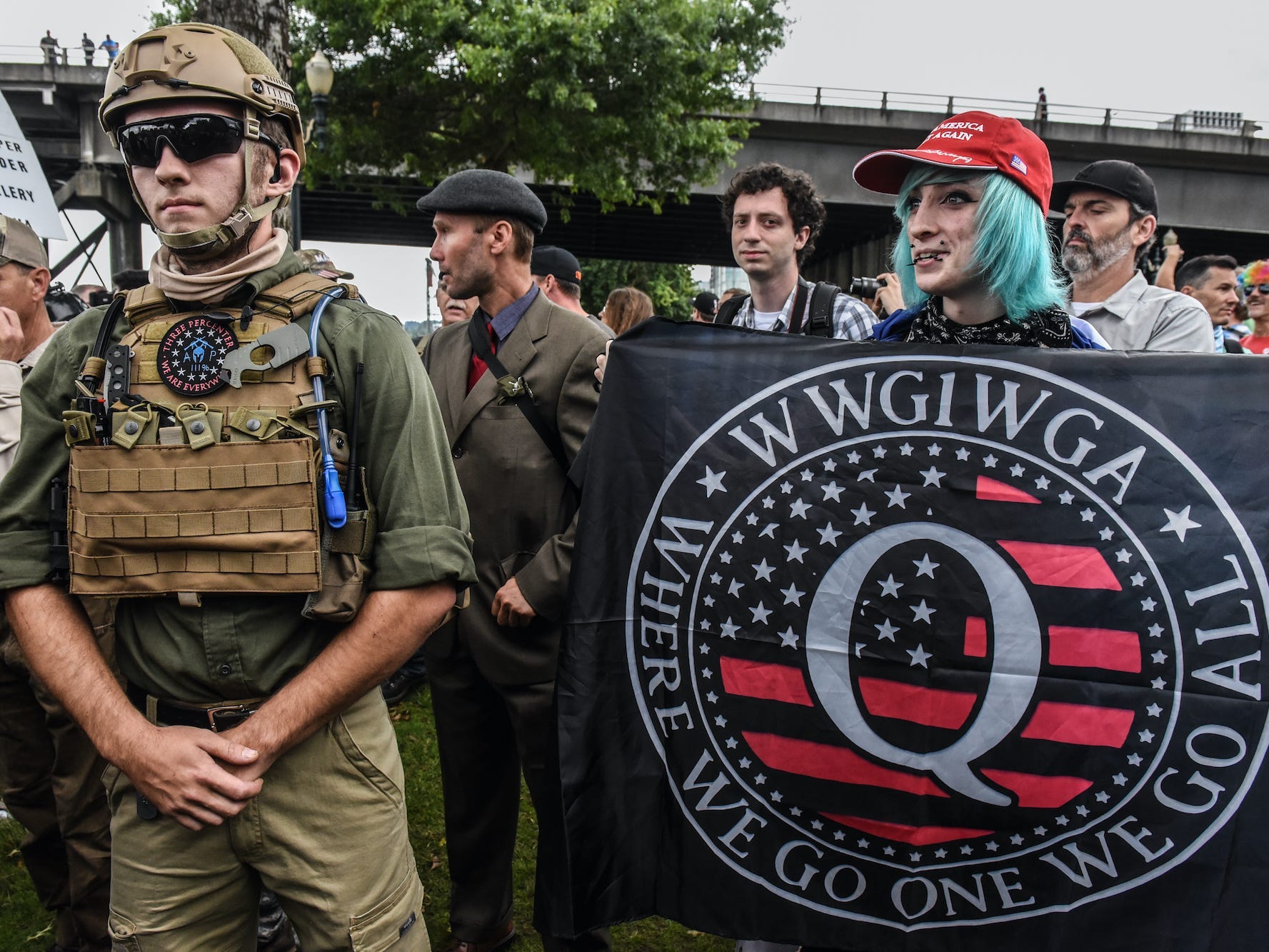 Stephanie Keith/Getty ImagesA person holds a banner referring to the Qanon conspiracy theory during a alt-right rally on August 17, 2019 in Portland, Oregon.

A trademark application for the phrase “Walk With Q” was filed with the USPTO in November 2019 by Chris Neff, who lives in Utah. Neff runs an apparel company called Walk With Q that sells QAnon-themed clothing. The office first refused Neff in January due to an incomplete application, and gave him time to respond, but abandoned it altogether in July when he missed the six-month response time.

In his trademark application, reviewed by Insider, Neff wrote that the company sells clothing, drinkware, and paper products.

“Q” is the anonymous figure who posts cryptic messages called “Q drops” on the anonymous forum 8kun, which are then interpreted by QAnon followers. The phrase “Walk With Q” indicates that a person is following “Q,” but it is not a popular phrase within the community. The “Walk With Q” Facebook page, which is associated with Neff’s company, has just over 1,000 followers and directs visitors to QMap.pub, a now-defunct QAnon site.

Neff, whose application was denied in January, did not immediately respond for comment. 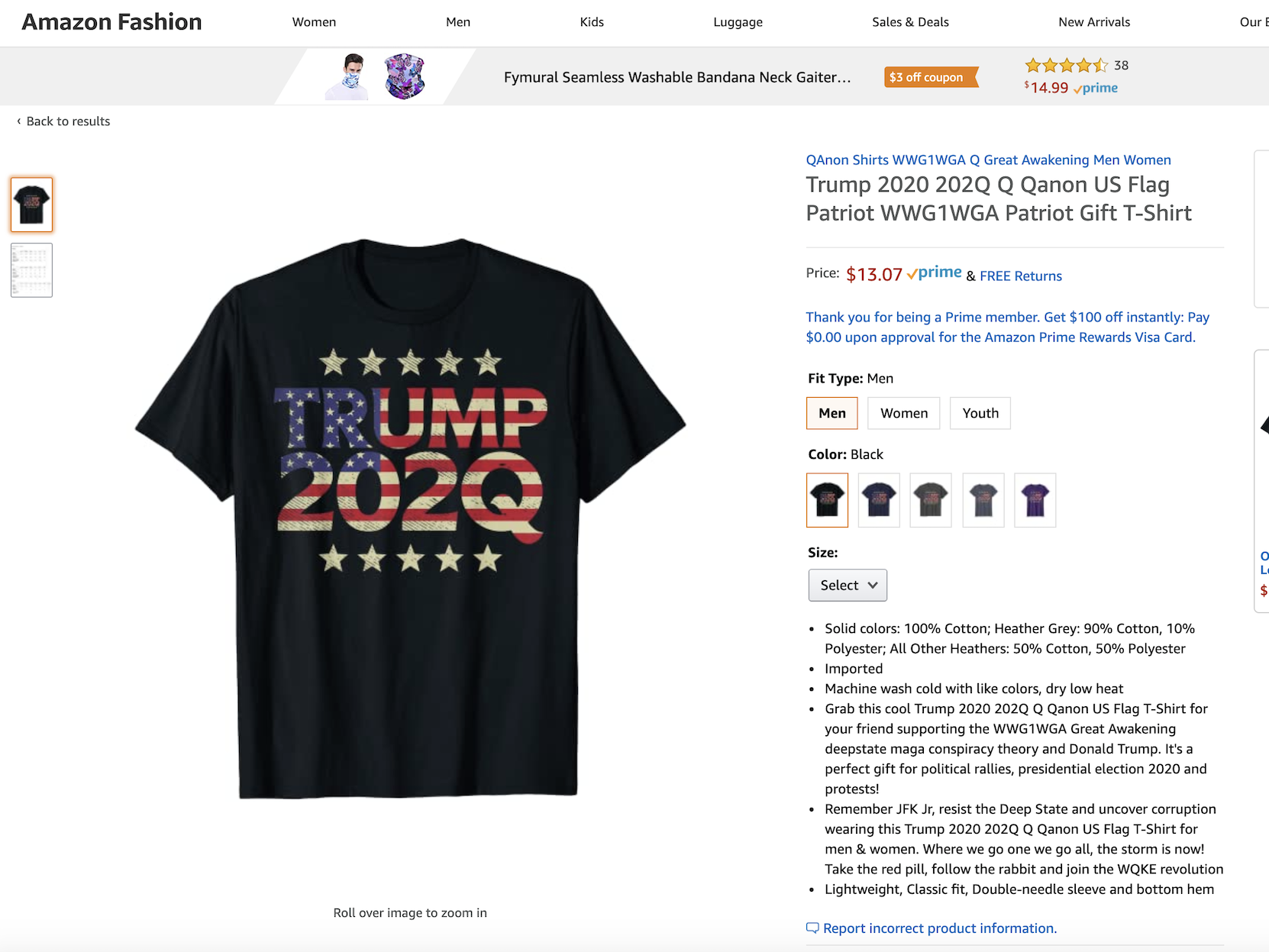 QAnon-related items have been available for years on Amazon and Etsy, which allow independent users to sell their own products.

Etsy announced on Wednesday that the company would ban QAnon-related merchandise under its policies that “prohibit items that promote hate, incite violence, or promote or endorse harmful misinformation.” An Amazon representative said the company did not have a comment regarding its QAnon products.

Aside from e-commerce, Jim Watkins, the founder of 8kun and former operator of the now-offline platform 8chan, registered a super PAC to raise money for Republican candidates called “Disarm the Deep State” that borrows language from QAnon. Federal Elections Commission documents, made available to the public by The Centre for Responsive Politics,show that as of August 31, the PAC earned nearly $US4,000 and spent $US646. QAnon experts told Insider that Watkins has used some of that money to buy advertisements on 8kun.