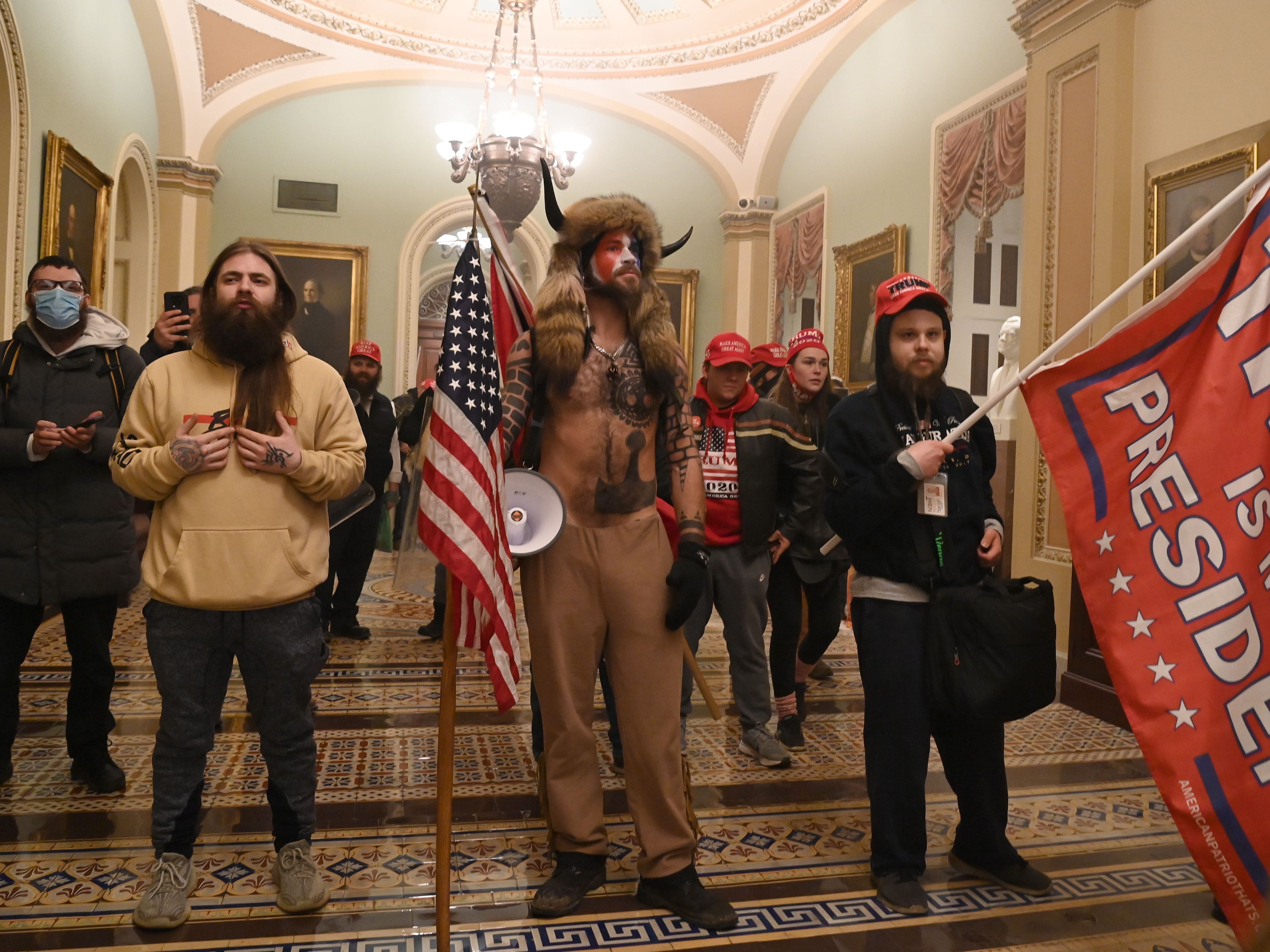 The “Q Shaman,” an eccentric supporter of the QAnon conspiracy theory whose shirtless appearance at the US Capitol siege revealed hate symbols he has tattooed on his body, appears to have denied claims from fellow QAnon supporters who think he’s secretly an antifascist actor in disguise.

Many believers of QAnon, a baseless far-right conspiracy theory alleging that President Donald Trump has been fighting to take down a “deep-state cabal” of pedophiles and human traffickers, were involved in the riot, along with other far-right extremists. The Arizona man known for attending rallies in the state as the “Q Shaman” to support QAnon and its associated belief system, became a fixture of Wednesday’s coup attempt after photos of him wearing a horned helmet and red, white, and blue face paint went viral.

On Saturday, the Justice Department announced that Jake Angeli, whose real name is Jacob Chansley, was arrested on charges that he “knowingly” entered or stayed in a restricted building without lawful authority, and charged with “violent entry and disorderly conduct on Capitol grounds.”

The far-right activist was photographed on the Senate dais and used a megaphone to communicate with the influx of Trump supporters who descended on the Capitol. But before his arrest, he emerged at the centre of a new unfounded conspiracy theory alleging that he was only an actor in disguise, as Insider’s Charles Davis previously reported.

Trump supporters, including congressional Republicans and Fox News anchors, have falsely claimed that the riot in the Capitol on Wednesday, which killed at least three people, featured “Antifa” protesters pretending to be Trump supporters. There is no evidence to support the claim, which was largely popularised by a now-retracted story on the right-wing Washington Times news website.

As Mashable’s Matt Binder reported, a misinformation campaign has even falsely alleged that Angeli is connected to House Speaker Nancy Pelosi.

Lin Wood, the Trump-supporting attorney who was permanently banned from Twitter on Thursday after weeks of spreading false voter-fraud claims and encouraging Wednesday’s incident in DC, accused Angeli of being a phony. Wood tweeted a photo of Angeli, writing, “Indisputable photographic evidence that antifa violently broke into Congress today,” according to the Huron Daily Tribune. Wood’s tweets are no longer available due to his ban.

A Twitter account that appears to belong to Angeli, who is also referred to as “Yellowstone Wolf” in the QAnon community, replied to Wood’s tweet Wednesday evening, writing, “I am not antifa or blm. I’m a Qanon & digital soldier. My name is Jake & I marched with the police & fought against BLM & ANTIFA in PHX.” Angeli has been seen attending Black Lives Matter protests as a QAnon-supportive counter-protester.

The tweet also suggested that Wood look up footage from One America News Network, a pro-Trump propaganda news outlet, showing him at a July 4 protest in Phoenix. Some Twitter users replied to the tweet by tagging the FBI’s Twitter account, after the agency was criticised for seeking public assistance in identifying rioters.

The account’s profile picture is an image of Angeli. Newsweek has also reported that the account, called @USAwolfpack, belonged to Angeli. The account has previously been promoted by other QAnon-supporting users.

In recent weeks, the account, which was created in 2018, shared articles and tweets spreading conspiracy theories about the September 11 attacks, the severity of COVID-19, and the existence of the Illuminati, a fictional group of world leaders that some conspiracy theorists claim controls the world.

Before his arrest, Insider sent emails to addresses associated with the man but the messages were returned to sender. Insider replied to a tweet from Angeli requesting comment.

Update: This article has been updated to reflect the arrest of Jacob Chansley.