“PlayerUnknown’s Battlegrounds” (“PUBG”) is the most popular game of 2017 by a mile, despite the fact it can only be played on PCs running Windows 10, and that it’s not even a fully finished game.

That’s right, “PUBG” is still in beta at the time of writing, and it became the most-played game on the Steam gaming platform, beating “Dota 2” for most concurrent gamers playing on Steam for the first time in years.

“PUBG” is soon coming to Xbox One on December 30, leaving PlayStation 4 users in the cold, at least for now. And because “PUBG” is only available on PC, Mac owners are also out of luck… until now.

My colleague Dave Smith recently tried an app called GeForce Now from Nvidia to play “Destiny 2” on a Mac, and he had overly positive remarks about his experience. And it turns out that one of the games you can play on GeForce Now is “PUBG.” The rest is history.

Here’s how you can play “PUBG” on a Mac, and what it’s like:

Haven't heard of 'PUBG?' Here's what it's all about. If you haven't heard of 'PUBG,' the most popular game of 2017, it's a battle royale-style game where you and 100 other online players try to survive to become the last person standing. You need to pick up weapons and gear and fight against other players, but there's also a virtual barrier than slowly encouraches on you and the map you're playing in, restricting the playable area until the game concludes. You can choose to be active and shoot your way through the game, or be stealthy and keep the shooting for the very last minute when only a few players are left.

'PUBG' is currently only available to play on PC, and players interested in playing 'PUBG' need a PC that's powerful enough to run the game smoothly. It's not a particularly lightweight game.

This is where Nvidia's GeForce Now comes into play. It will let you play 'PUBG' on your Mac if you don't have a PC that's powerful enough to play 'PUBG,' or an Xbox for when the game is released.

All you have to do is install the GeForce Now app on your Mac, and sign in to your Steam account -- or create a Steam account if you don't have one. You can find the link to download GeForce Now beta on your Mac here. It's free for now, and creating a Steam account is also free. You'll just have to buy 'PUBG,' which costs $US30.

The GeForce Now app is basically like owning a high-performance gaming PC without actually owning one. Business Insider
The screen says 'Preparing your cloud gaming PC.' Indeed, GeForce Now is actually preparing a real PC in the cloud to run the game.

The way GeForce Now works is that you connect to an Nvidia gaming PC somewhere in 'the cloud' -- most often a specialised warehouse full of web servers and computers -- from your own computer. This gaming PC in the cloud runs the game itself, and the visuals for the game are streamed over the internet to your computer screen at home (or at work!), much like a YouTube of Netflix video.

That means you can run available games at their highest graphical settings because your own computer isn't doing any of the work towards running the game. All your computer is doing is streaming the video and relaying your keyboard strokes and mouse movements to the Nvidia gaming PC in the cloud. It will even work if you have an old, underpowered computer, just as long as it can reliably stream video over the internet.

I used the GeForce Now app to see if my WiFi internet connection at home would be sufficient, and it was. According to the GeForce Now app, you need a minimum internet speed of 25Mbps, but it recommends 50Mbps.

It also required a 'ping,' or latency of 80ms at most, but it recommends 40ms; the lower the latency the better, when it comes to responsive gameplay. My internet connection has a latency of 18ms.

I also set the app to play games in 'Ultra Streaming Mode' for the best performance. I played 'PUBG' on my 2016 MacBook Pro on my home's WiFi network. The graphics were surprisingly good, and I couldn't believe how little 'lag' there was. I'm used to playing 'PUBG' on my gaming PC, where I get amazing graphics and lag-free gameplay, and I have to say, the game looked just as good on my Mac while playing it on GeForce Now.

Considering the game was running on a computer that's probably miles and miles away from me, and it's streaming to my Mac over the internet, I was amazed by how little 'lag' -- the delay between my movements and my character's actions -- there was.

Except for one thing...

While the game looked great and movements were amazingly responsive, I should mention that I experienced a few stutters during gameplay. There were two-to-three second chunks of the game where the stream froze or stuttered. That's not a good thing for a tense, fast-paced game like 'PUBG.'

To note, I experienced stutters despite the fact that my internet connection was seemingly optimal for streaming games.

Most of the stutters I experienced didn't occur during critical points in the game, but the stutters are random and could very well happen during a firefight, or when you're trying to sneak up on an opposing player. Indeed, there were two times when the stutters were not appreciated.

Check out one of the games I played to see what I mean. 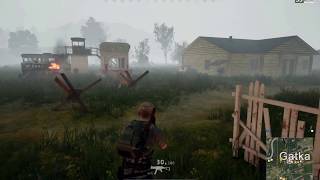 I recorded the entire experience of starting up a game of 'PUBG' from the GeForce Now app up until my in-game death:

In the video above, you'll find a bunch of stutters throughout one of the games of 'PUGB' I played on my MacBook Pro. You'll see that it stuttered at two inopportune times at the 20 minute and 17 second mark on the YouTube video's timeline. Another point in the timeline to check out is the 25 minute and 10 second mark.

It's my biggest issue with playing 'PUBG' on GeForce Now.

I didn't experience as many stutters on the incredibly fast ethernet connection at the office, so it was likely my WiFi connection that was causing the issue.

The Business Insider office has an incredibly fast internet connection with very low 'ping,' or latency, which is directly related to lag. When I played 'PUBG' while plugged into the office's ethernet connection, there were noticably fewer stutters.

It's a sign that the stutters I was experiencing were more likely from my WiFi connection rather than the GeForce Now app. Still, my WiFi router is a recent, powerful, and expensive model -- I'm using Netgear's Orbi mesh WiFi system, if you're wondering -- so it was a little surprising that I was experiencing as many stutters.

If possible, it's best to connect your Mac to an ethernet connection rather than WiFi to minimise stutters.

Still, it wasn't so bad, and the game was still playable on GeForce Now. If a Mac was my only option, I'd be perfectly happy to play 'PUBG' on GeForce Now. I'd just have to come to terms that the stutters can put me at a disadvantage against other players who are playing on stutter-free on PCs.

That said, if you're a Mac owner who doesn't have a gaming PC, but you have an Xbox One, you may want to wait until the game is released on Xbox One on December 30. It's not clear yet whether you can transfer your Steam 'PUBG' purchase over to the Xbox One.

With all that said, playing 'PUBG' or any other game on GeForce Now is a good solution for travelling when the only computer I bring with me is my Mac. I can even play games at work! (Note to work: I'm playing 'PUBG' for content! I swear!)

The GeForce Now app is still in beta, which means the experience can still improve.

GeForce Now was first introduced for Nvidia's SHIELD devices, and it let you play power-hungry PC games on relatively underpowered SHIELD devices. It's a service that costs $US8 per month.

It's currently in beta for Macs and it's free for now. Nvidia will likely charge for the Mac service when it comes out of beta. Perhaps Nvidia can optimise the app even further for WiFi connections once it's fully released to eliminate the stutters I was experiencing on my home's WiFi network.

Still, it's a great way to fight your way to a 'chicken dinner' -- the ultimate prize in 'PUBG' for winning a match -- if a gaming PC is out of reach.