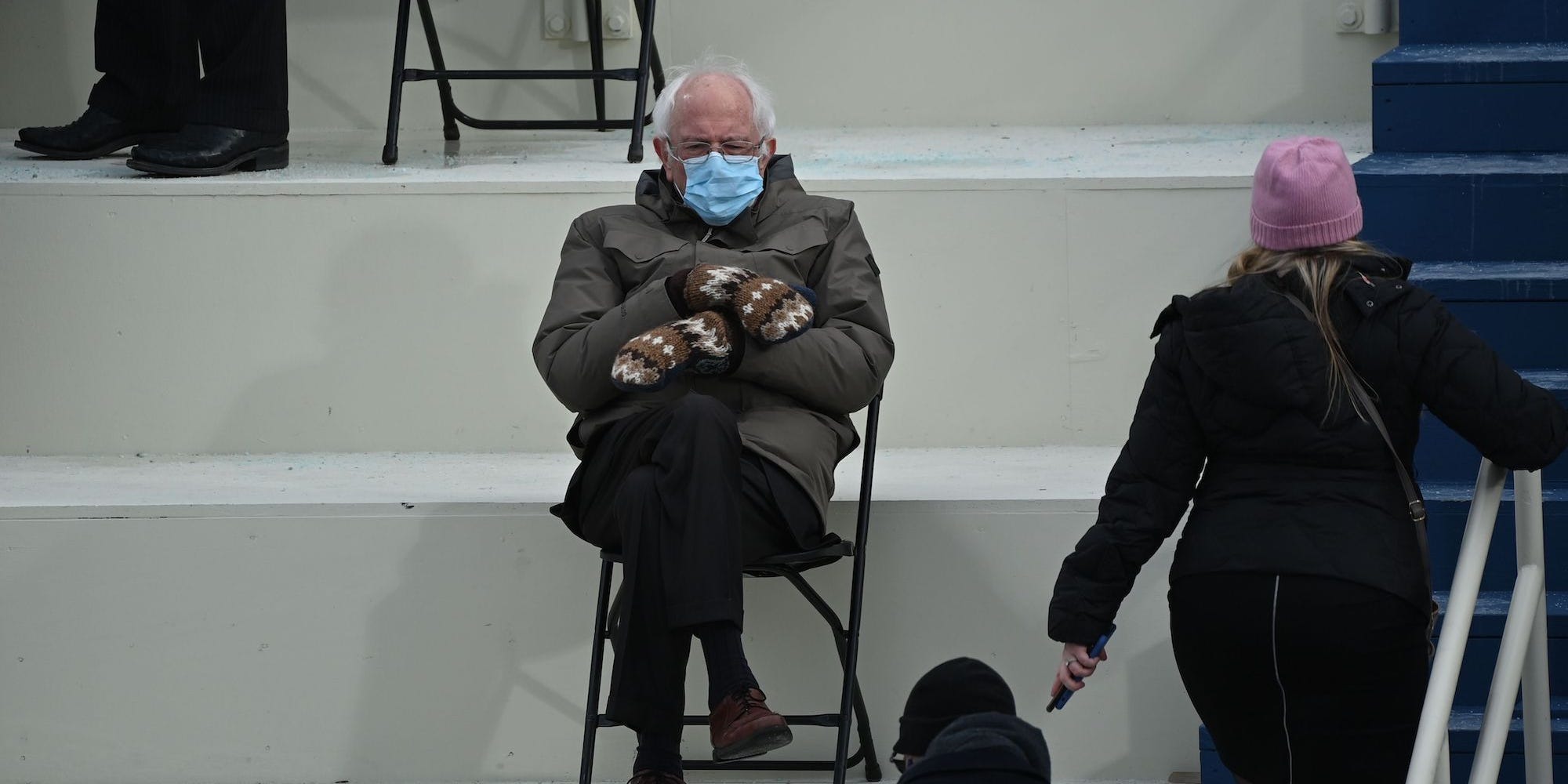 Brendan Smialowski/Getty ImagesBernie Sanders is making money for charity thanks to his virtual inauguration meme.

When a wing of progressives called on Rep. Alexandria Ocasio-Cortez to force a Medicare For All vote in the House, it drew a line in the sand for people on the left. #ForceTheVote was an effort that intended to ostracize Republicans and centrist Democrats who don’t support an overhaul of our nation’s healthcare system. AOC didn’t think it was a good idea, noting that forcing a vote that doesn’t have a chance in the House, let alone the Senate, could only cause friction among Democrats and harm their cause.

This disagreement created a loud faction of progressives who are now anti-AOC. They are seemingly led by comedian-turned-political talk show host Jimmy Dore, who in December said that AOC is now “standing between you and healthcare,” and went on to call her a liar, gaslighter, and coward.

Unthinkably, given her standing as the highest profile progressive member of Congress, AOC saw her Twitter mentions flooded with hate-fuelled banter and accusations of being a sellout and fraud.

She’ll be fine, of course, as that’s just part of her job. But the impulse from progressives to turn on their own â€” and for relatively dumb reasons â€” has become a baffling spectacle and a maddening trend that’s stalled real change. Instead of infighting and bickering, progressives need to take a step back and understand what the best path to progress is.

You stab my back, and I’ll stab yours

The 2020 Democratic primaries were heated. People who were passionate about a particular candidate would sometimes wade into insults and ridicule on social media. Just about every candidate had a small but loud faction of supporters who would do this, but for whatever reason, Bernie Sanders’ online faction got the most media attention. While Sanders continued to offer an inclusive agenda and even denounced the more annoying parts of his base, scores of liberals and progressives became turned off by even the thought of Sanders. They held this grudge despite his long-standing record on vital issues and humble demeanour.

This became clear when Sanders, as head of the Senate Budget Committee, asked Neera Tanden, Biden’s pick to lead the Office of Budget Management, to reflect on her own attacks on social media, including personal attacks she hurled at Bernie himself. Tanden apologised for her actions, but if you looked under any tweet about the exchange, you saw countless accusations of sexism on Bernie’s part, attacks on his character, and a general sense of pure hatred for the man.

This grudge against Bernie Sanders held by so-called progressives remains weird and a little bit sad, especially considering how long it’s been since the primaries. The disdain for the Vermont senator even affects the people he associates with. When MoveOn, a high-profile progressive advocacy organisation, endorsed Nina Turner, a former Bernie Sanders surrogate, for Congress, it was met with a wave of displeasure.

The list of pointless grudges doesn’t stop there. I’ll be the first to admit that I was upset with Sen. Elizabeth Warren during the 2020 primaries.

I felt that she had undermined the progressive cause not just by promoting a misleading story that implied Sen. Bernie Sanders was sexist, but also by not corralling her supporters behind him when her campaign ran out of steam.

But now that a whole year has passed, it is easy to admit that Warren is a pivotal part of the progressive agenda and should be supported as such. Many progressives, though, simply can’t get over that grudge. She’s still a “snake” in too many people’s eyes.

These people are too petty to see that she’s fighting for everything they want, including universal healthcare, a $US15 minimum wage, and a cancellation of student loan debt. It will be harder for progressives to accomplish those things if people who advocate for them aren’t supportive of the lawmakers who can make them happen. It’s not just Warren who’s been targeted by progressive grudges, either.

Like Sanders, Warren has fought for a slew of policies that progressives dream about, but for those who illogically consider them enemies of the progressive movement, that doesn’t matter.

As someone who spends a lot of time on Twitter pointing out the hypocrisies of politicians, I am not saying you shouldn’t be sceptical of them in general. Even trivial forms of ridicule aren’t so bad in the larger discourse. But people should save their real disdain for an actual policy or platform they disagree with, instead of hating on someone who’s on their side, and for some trivial thing that happened more than a year ago. Debate is fine and encouraged, but the shaming and booing of one’s own team is counter-productive.

Figuring out who the best options for progress are shouldn’t be nearly this complicated. Think of the things you support, and support the politicians who agree with you. Naturally, when different strategies towards progress are debated, things may get heated. You might grow weary of someone and have less tolerance for them. That’s totally fine, and normal even. But progressives holding these year-long grudges against other progressives can only hurt the ultimate goal.

I wish Bernie Sanders was the Democratic nominee in 2020 and I wish Elizabeth Warren, after realising her campaign was toast, had done more to solidify his chances. But both of these officials, along with newly chastised-from-the-left AOC, have a moral fortitude that’s actually pretty rare in politics. They serve us, but we have a role to play in their success. We just have to be smart about it.