Another day, another Christie’s sale.

Beginning July 23, the famed auction house will publicly launch its Gamechangers series, paying homage to the greatest athletes of all time.

The series will start with two online auctions: “For Love of the Game,” a private exhibition lasting from July 20 to August 14, and “The Athlete: Photographs by Walter Looss Jr.,” which will run from July 23 to August 11.

But one particular auction in the series is perhaps the buzziest. Created in conjunction with sneaker marketplace Stadium Goods, “Original Air: Michael Jordan Game-Worn and Player Exclusive Sneaker Rarities Auction” will offer one of the most comprehensive selections of sneakers worn throughout Michael Jordan’s career.

Browsing for the Michael Jordan Game-Worn auction will begin today and bidding will be held from July 30 to August 13. The collection includes 11 sneakers deemed the “rarest of the rare” by the auctioneers, and proceeds from the sale’s top lots will benefit the NAACP Legal Defence Fund.

Here’s a sneak peek at the 11 pairs of sneakers set to be auctioned in the Michael Jordan Game-Worn auction, in ascending order of estimated sale price. 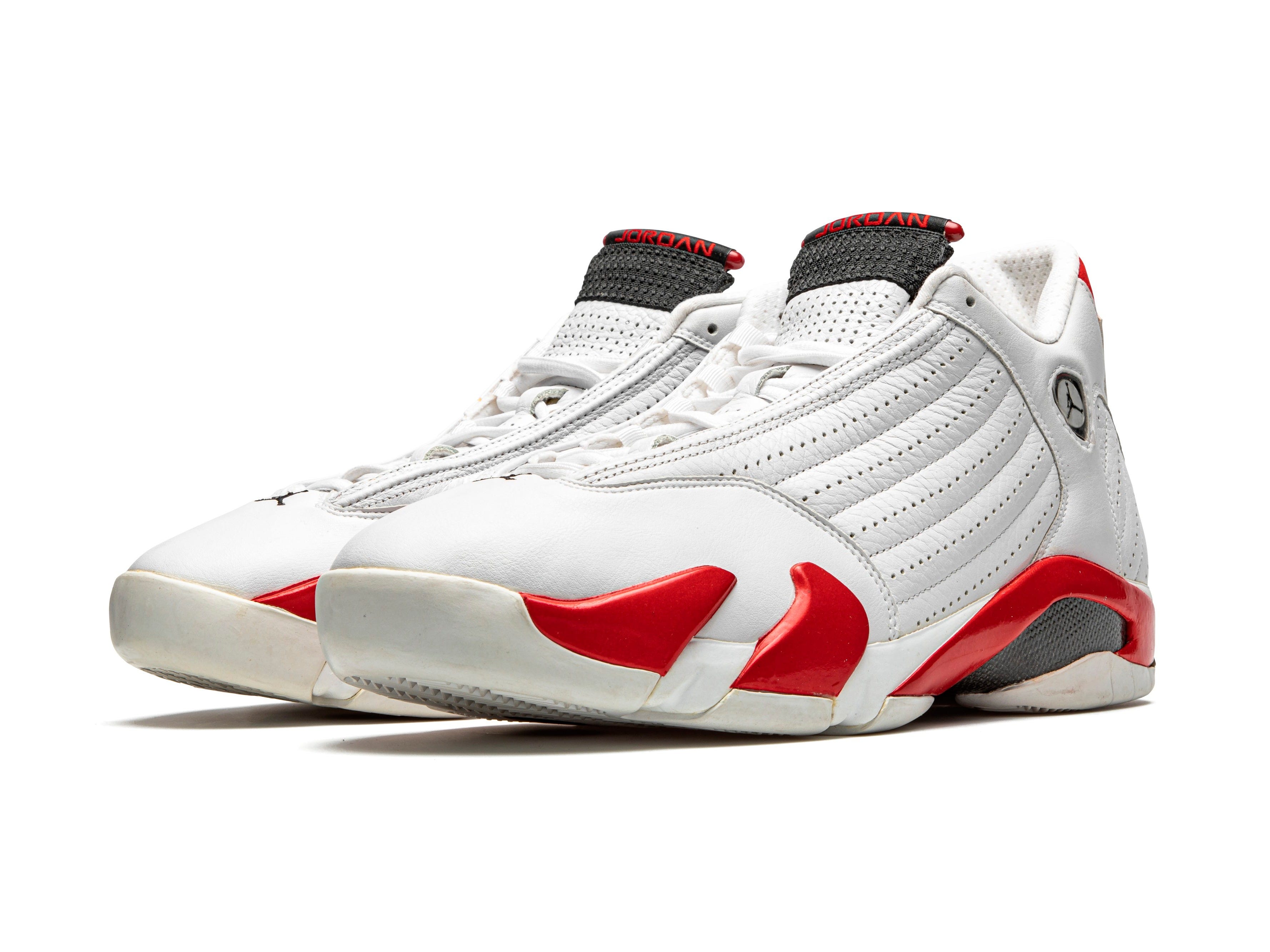 Jordan wore this pair as he practiced for the 1998 NBA Finals, and the shoes were featured in the docuseries “The Last Dance.“ 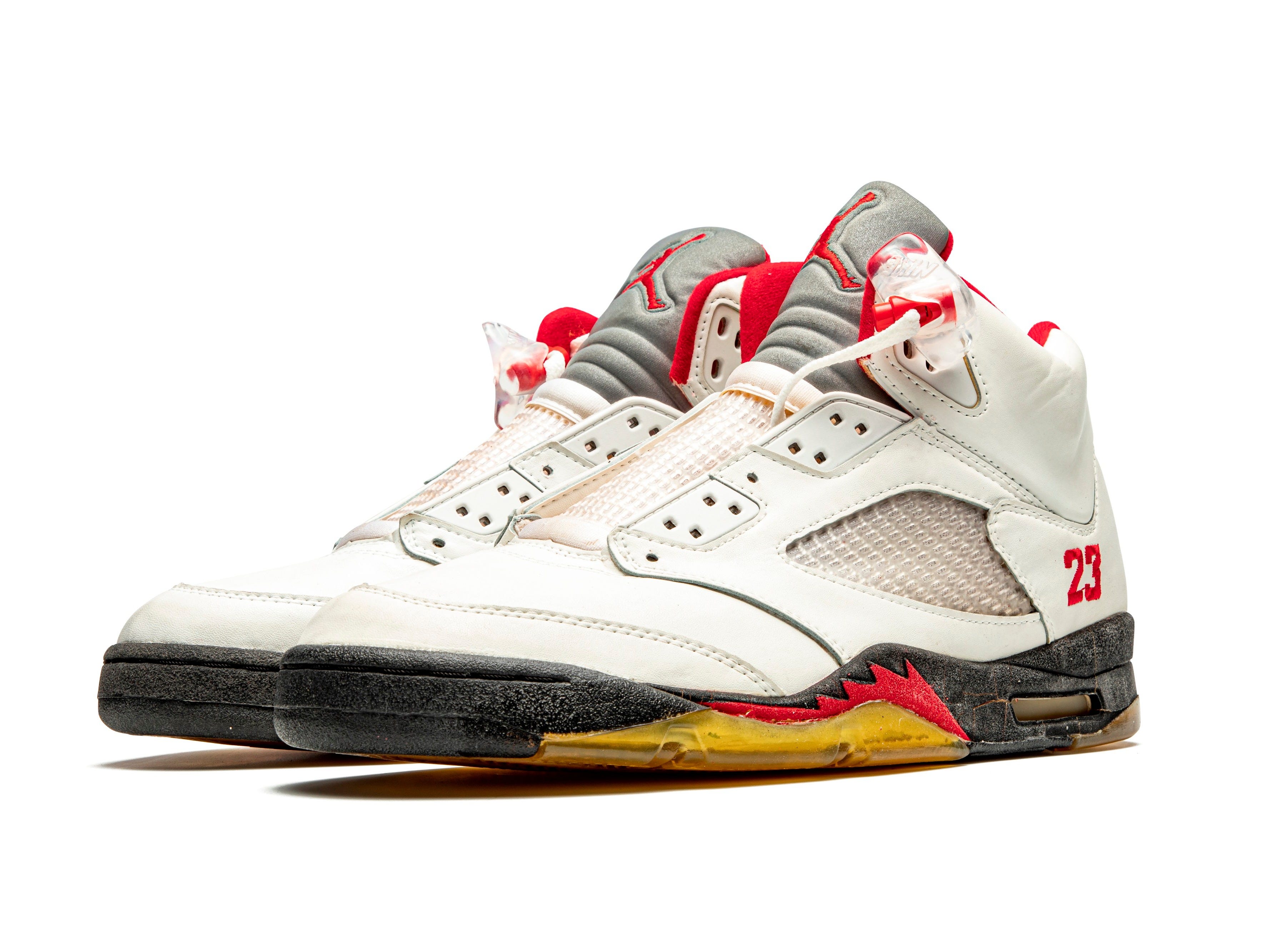 These shoes have a heel customised for Jordan. Other features include a lace lock, clear rubber on the outsole, a reflective tongue, and an asymmetrical ankle collar. According to the press release, this pair marks the first time such features have been implemented in a basketball shoe. 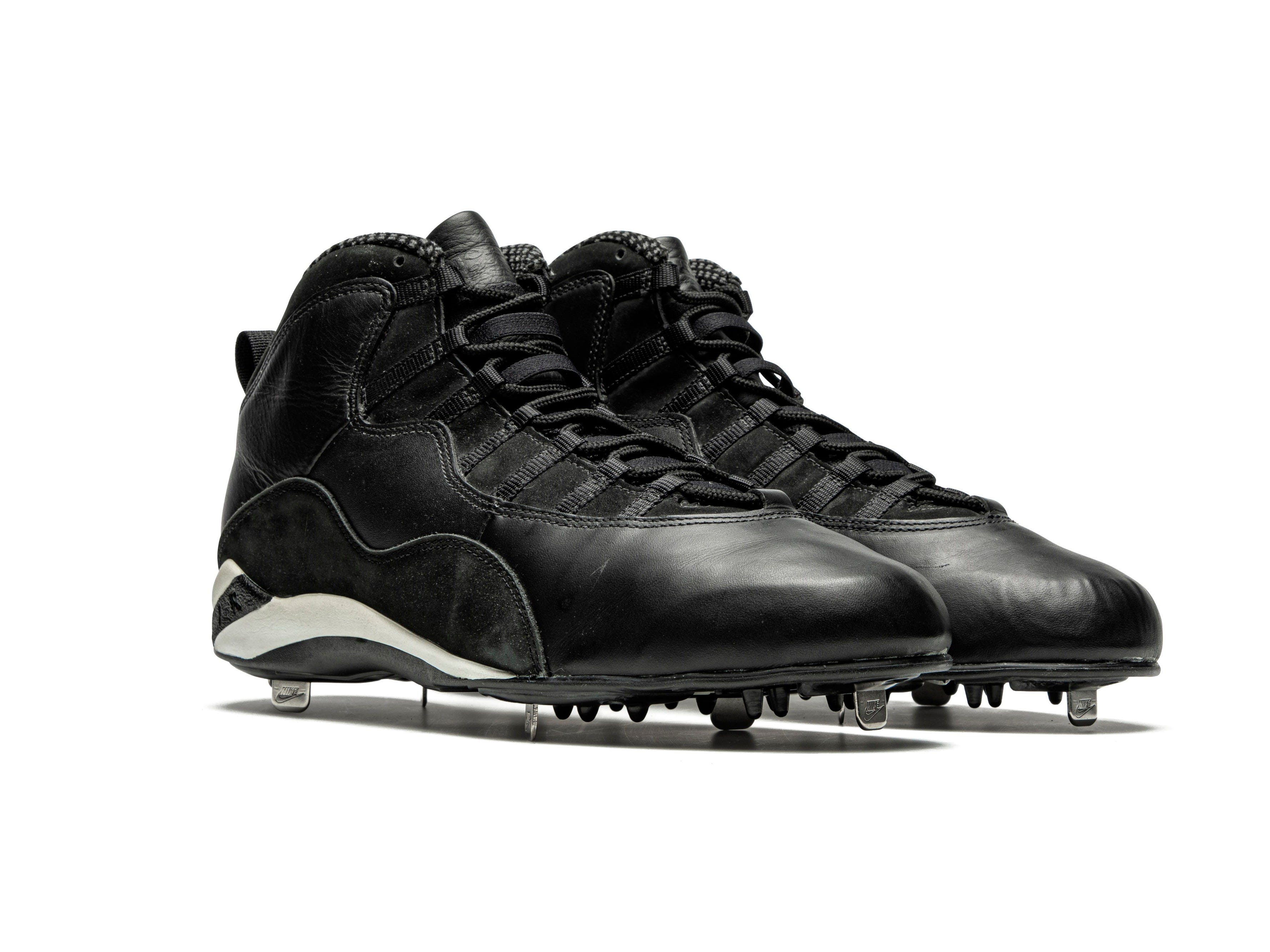 After Jordan retired from the NBA in 1994, he started a brief baseball career and played minor league baseball. At least once, Jordan played in these customised Air Jordan 10 baseball cleats. They’re extremely rare because only a few were made during the time between his baseball career and his return to the NBA. 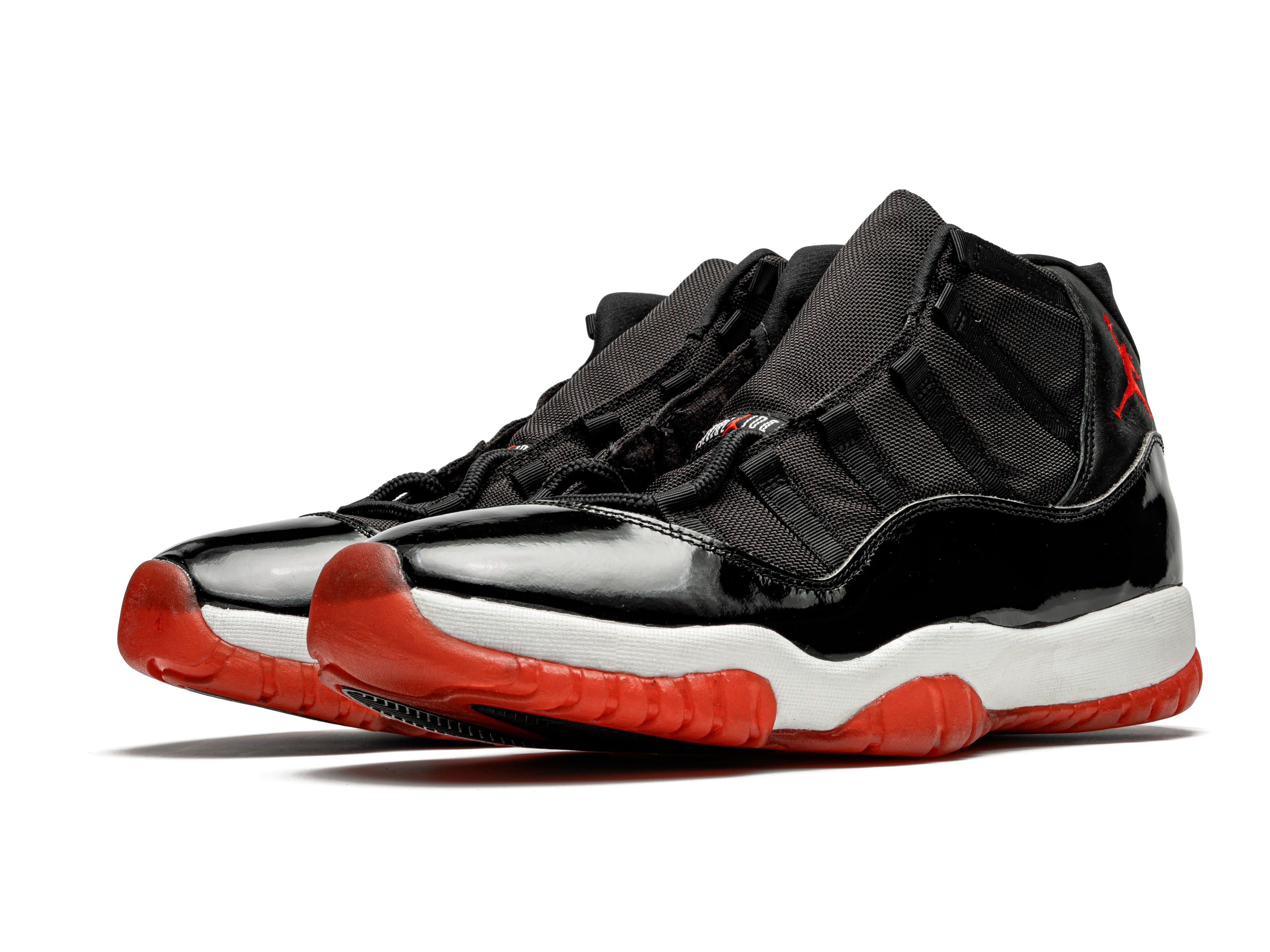 Jordan wore these shoes during his first full NBA season after ending his MLB stint. He then went on to win his fourth championship. These shoes were introduced during the playoffs in the previous season, according to the press release.

The group Boyz II Men also made this Air Jordan model famous when they wore them to the 1996 Grammy Awards. 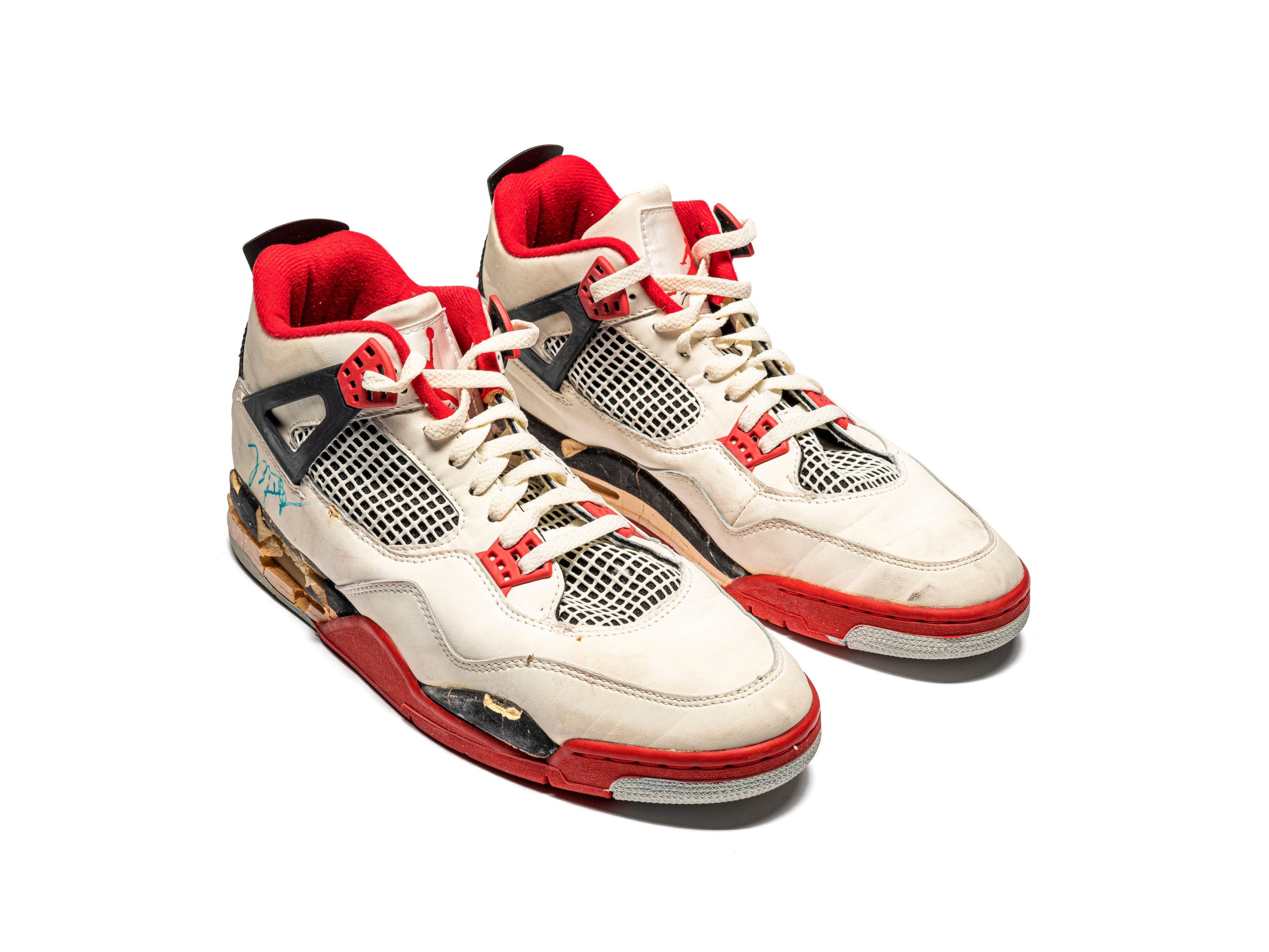 These are a pair of Jordan’s last signature shoes from the 1980s. Jordan wore this exact pair when he played in the Chicago Stadium against the Atlanta Hawks on November 28, 1989, according to Christie’s press release. 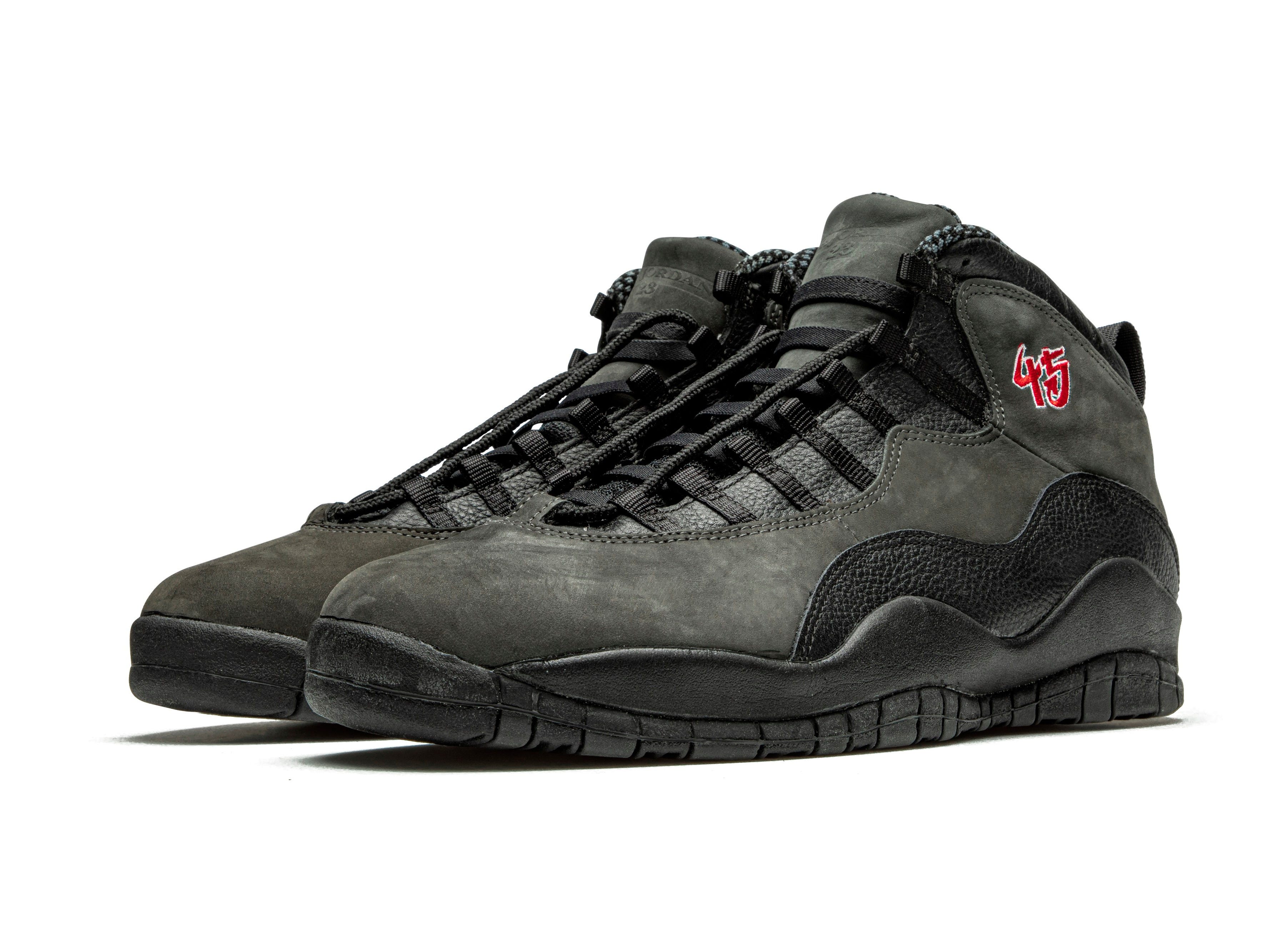 After his short baseball career, Jordan returned to the NBA in March 1995 and briefly wore these Air Jordan 10s. 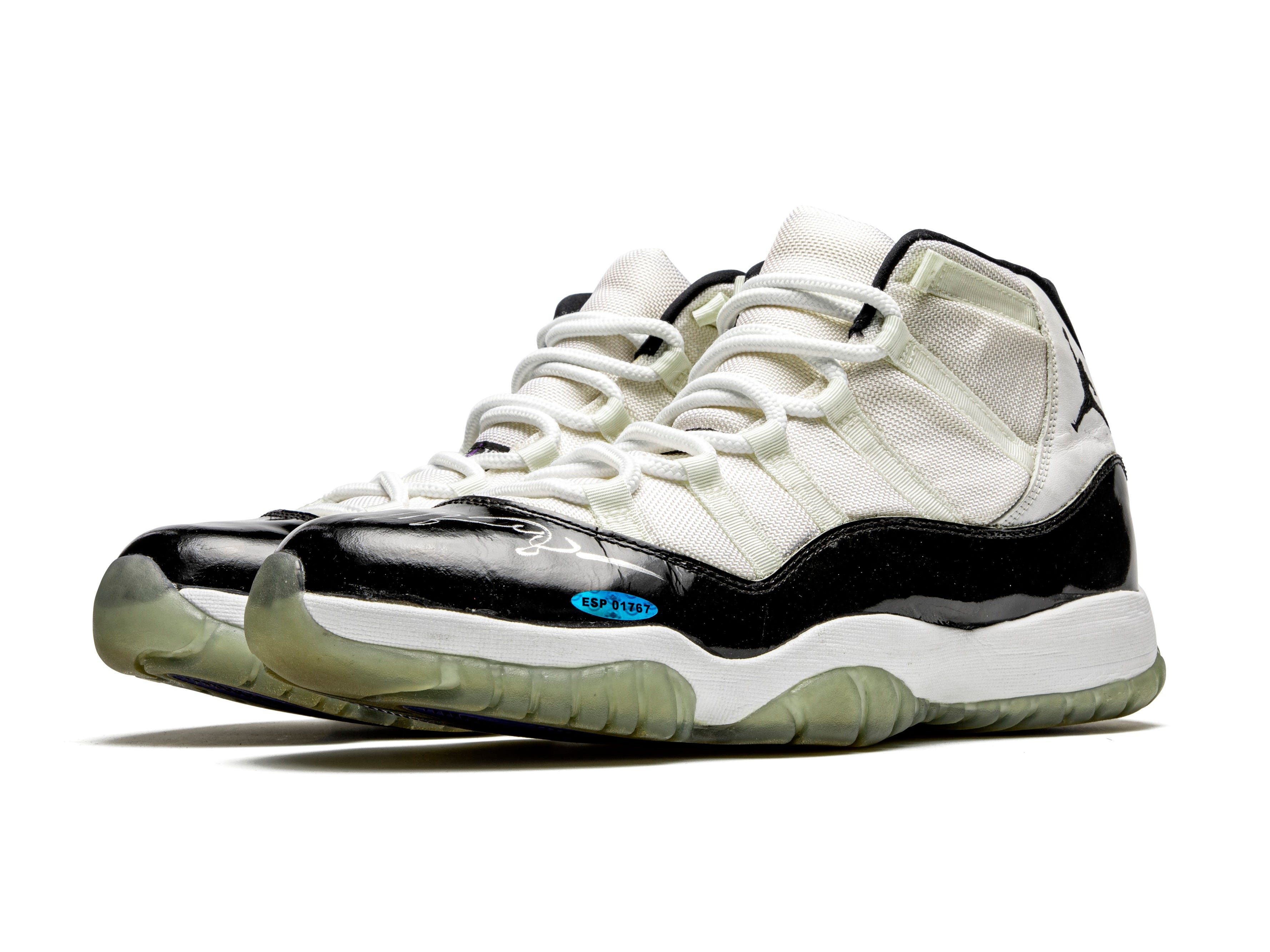 Jordan wore this pair of sneakers for his entire 1995-1996 season before switching to a new shoe for the playoffs. The shoes have an adjusted toe box and a mid-cut collar, according to the press release. 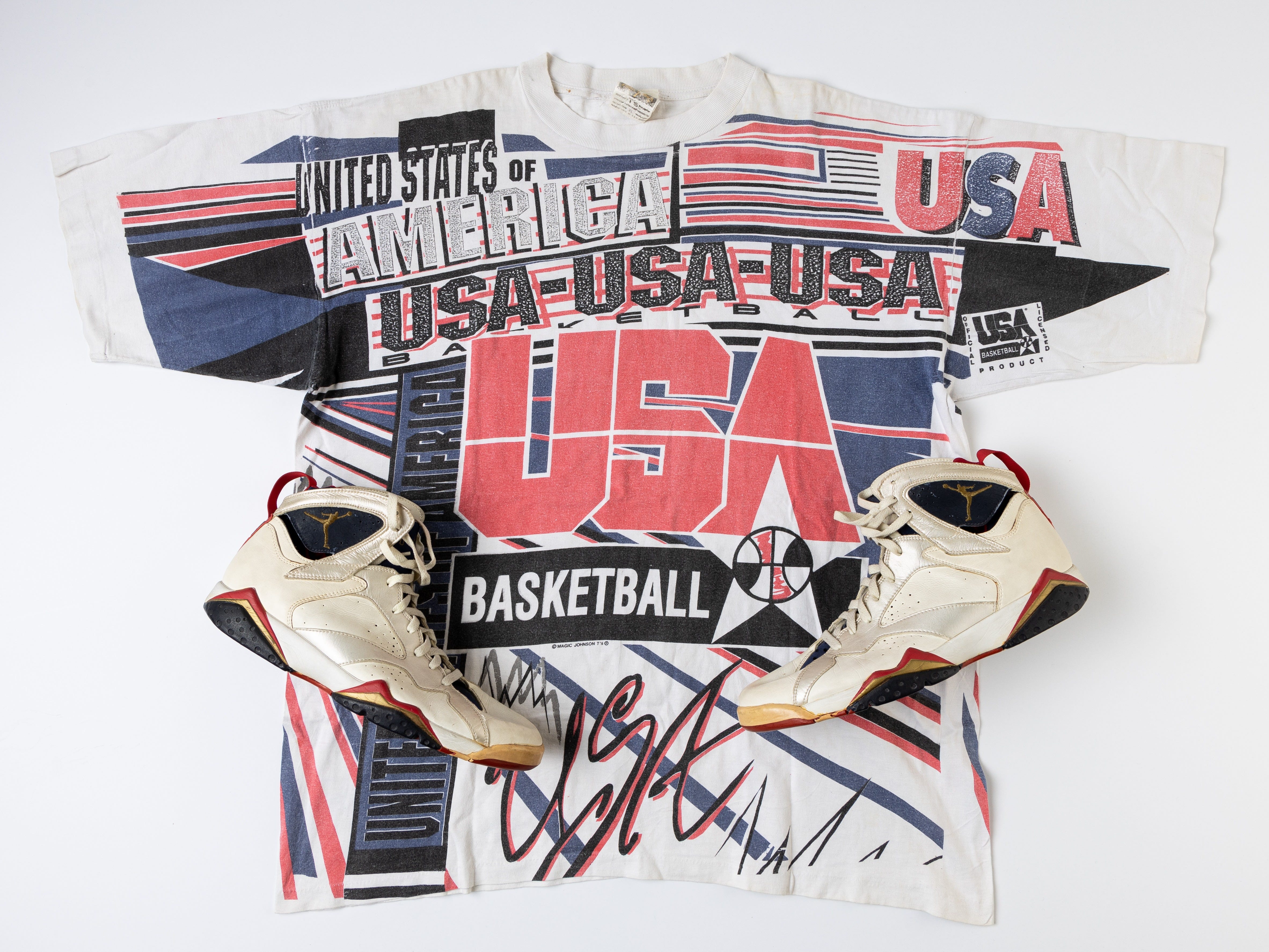 Jordan wore these sneakers during the 1992 Olympics, when he was part of the “Dream Team.” According to the press release, he wore these shoes during the August 8, 1992 game, in which the US took the gold medal against Croatia.

Jordan scored 22 points at the game, helping team USA win 117-85. These sneakers, along with a Magic Johnson T-Shirt, came from a receptionist at the Ambassador Hotel in Barcelona, Spain, where the “Dream Team” was staying at the time.

The shoes, along with the T-shirt, were given to the receptionist as a thank you. 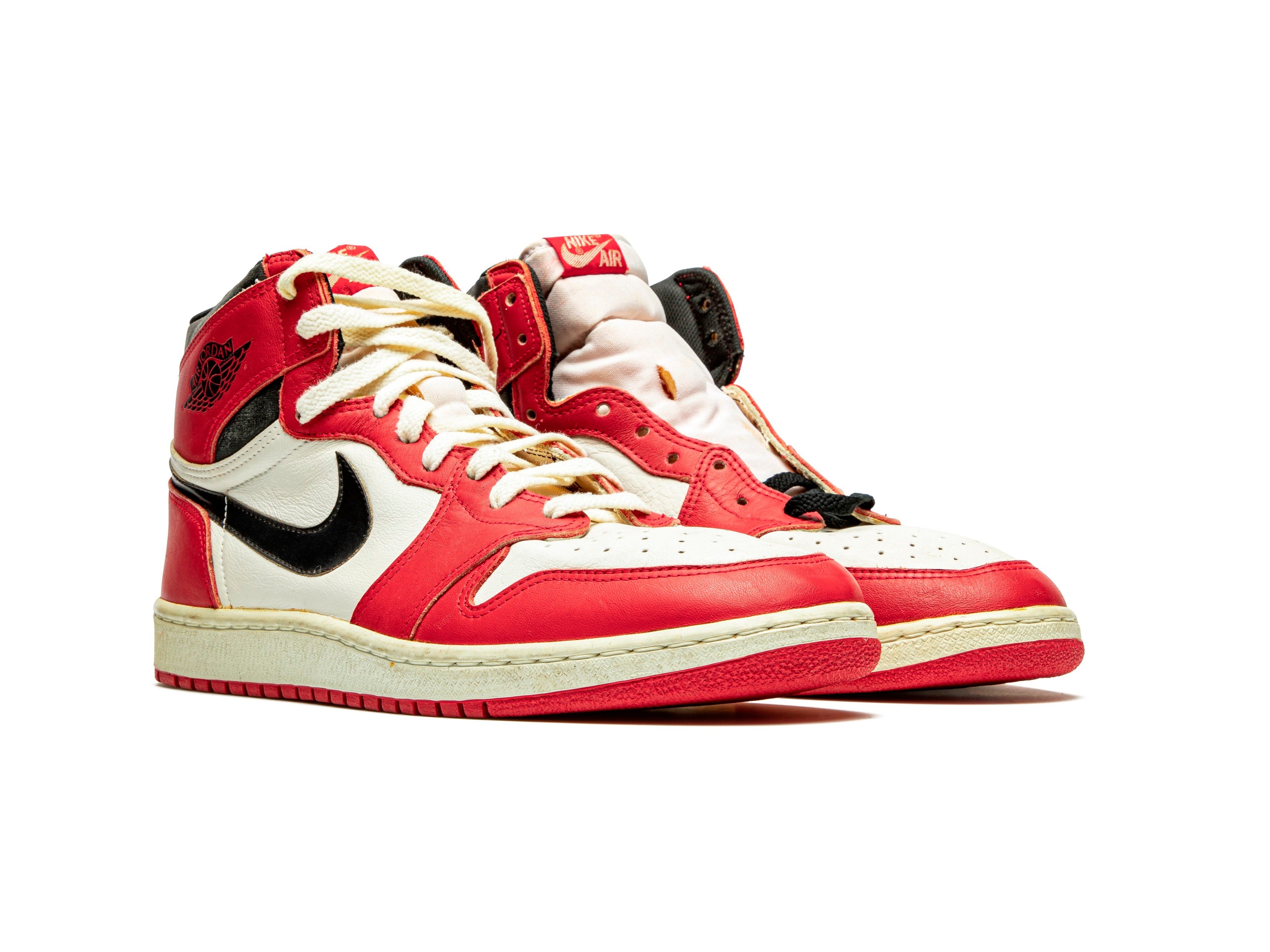 This shoe was designed by Peter Moore during the time the name “Air Jordan” was first coined by Michael Jordan’s agent, David Falk. 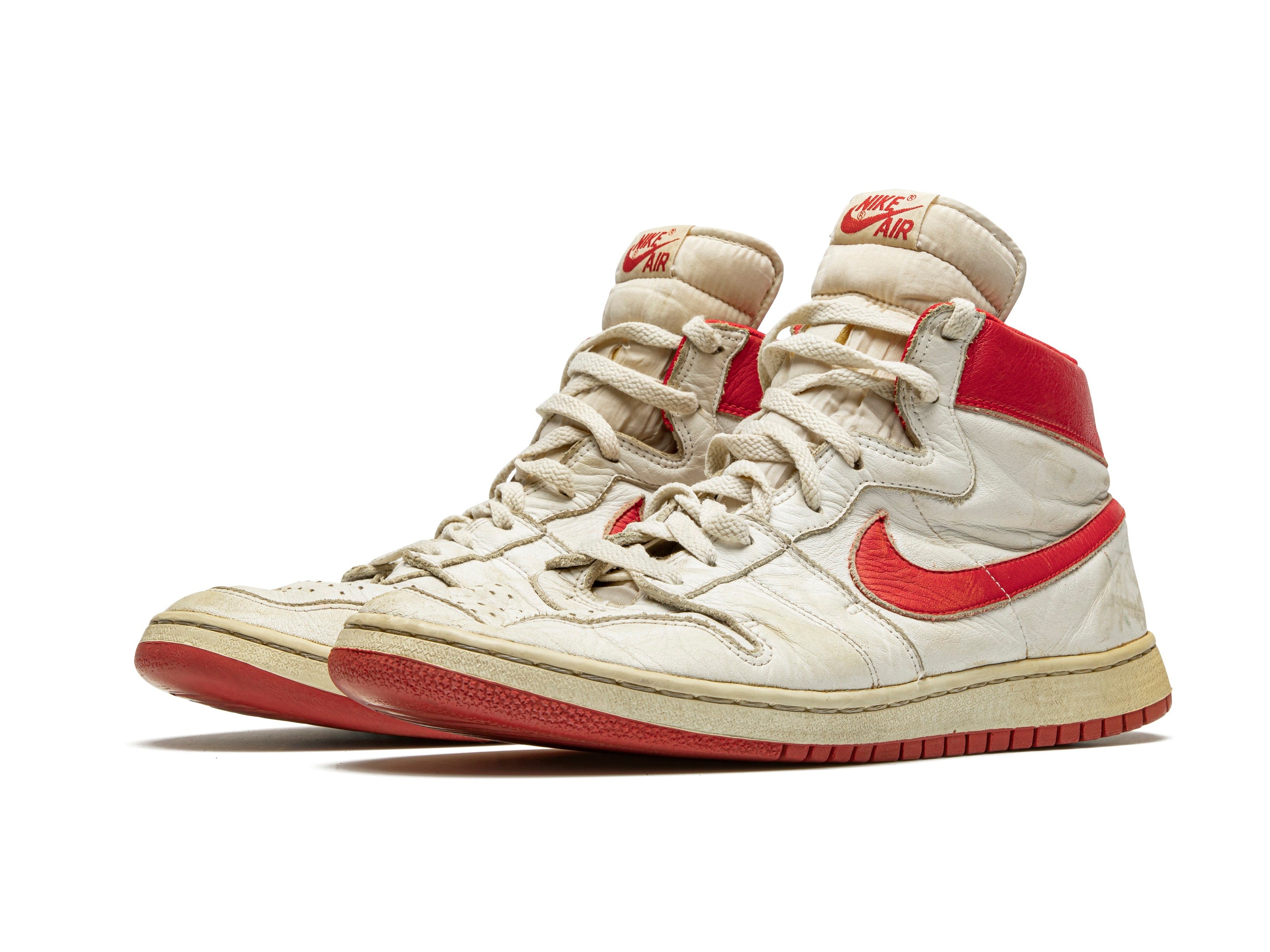 Jordan wore these sneakers before the Air Jordan 1 was even released. These were worn for the NBA preseason and in the early games of his rookie year. According to the press release, Jordan’s version of the Air Ship was customised especially for him.

Worn only for a brief time in the pre-Air Jordan era, this pair is one of the rarest in existence, according to Christie’s. 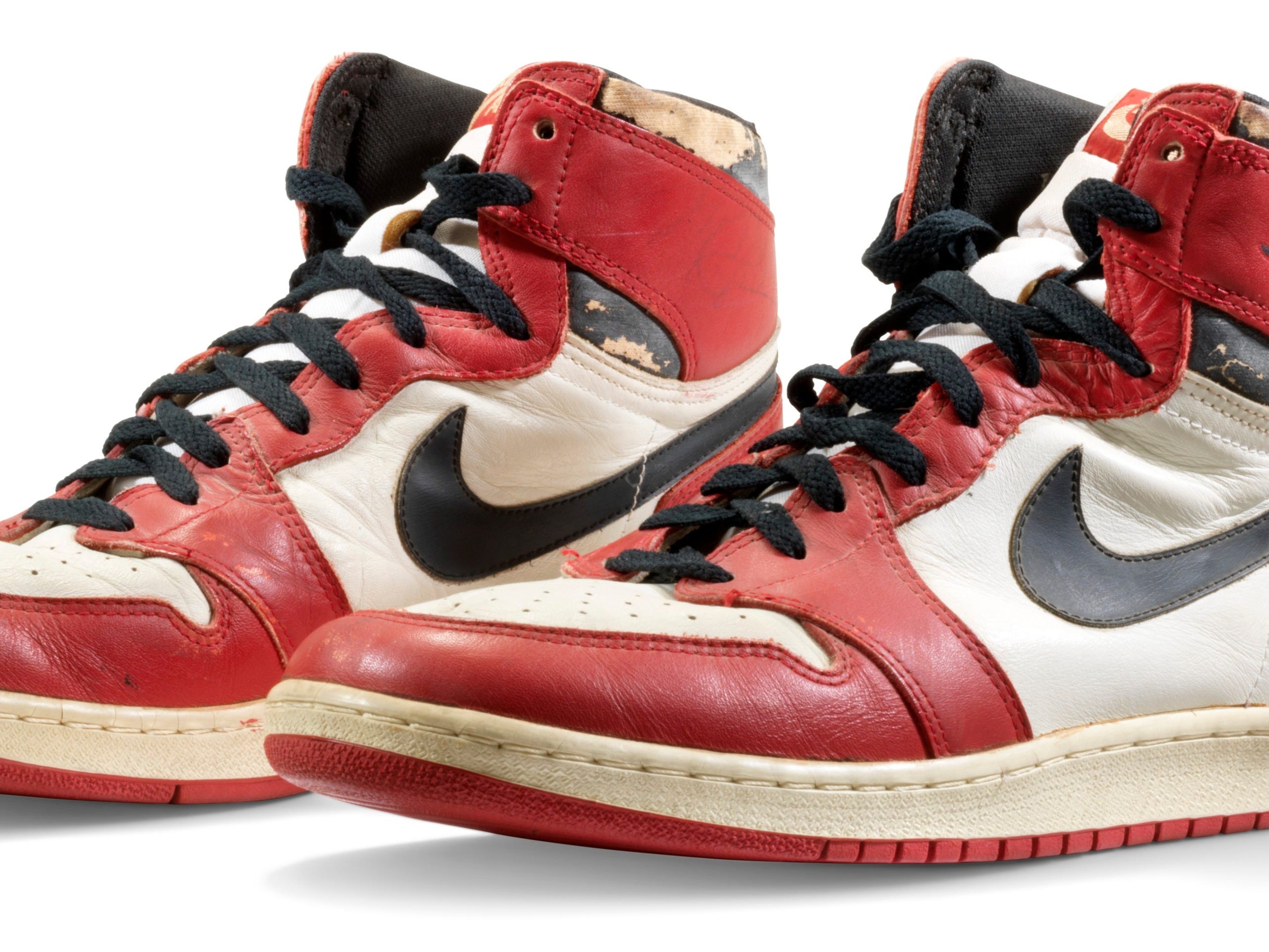 These were the shoes that Jordan wore during a match in Trieste, Italy, in which he scored 30 points and memorably had a dunk so strong that it shattered the glass backboard. Some of the glass remains in the sole of the left shoe, according to the press release.