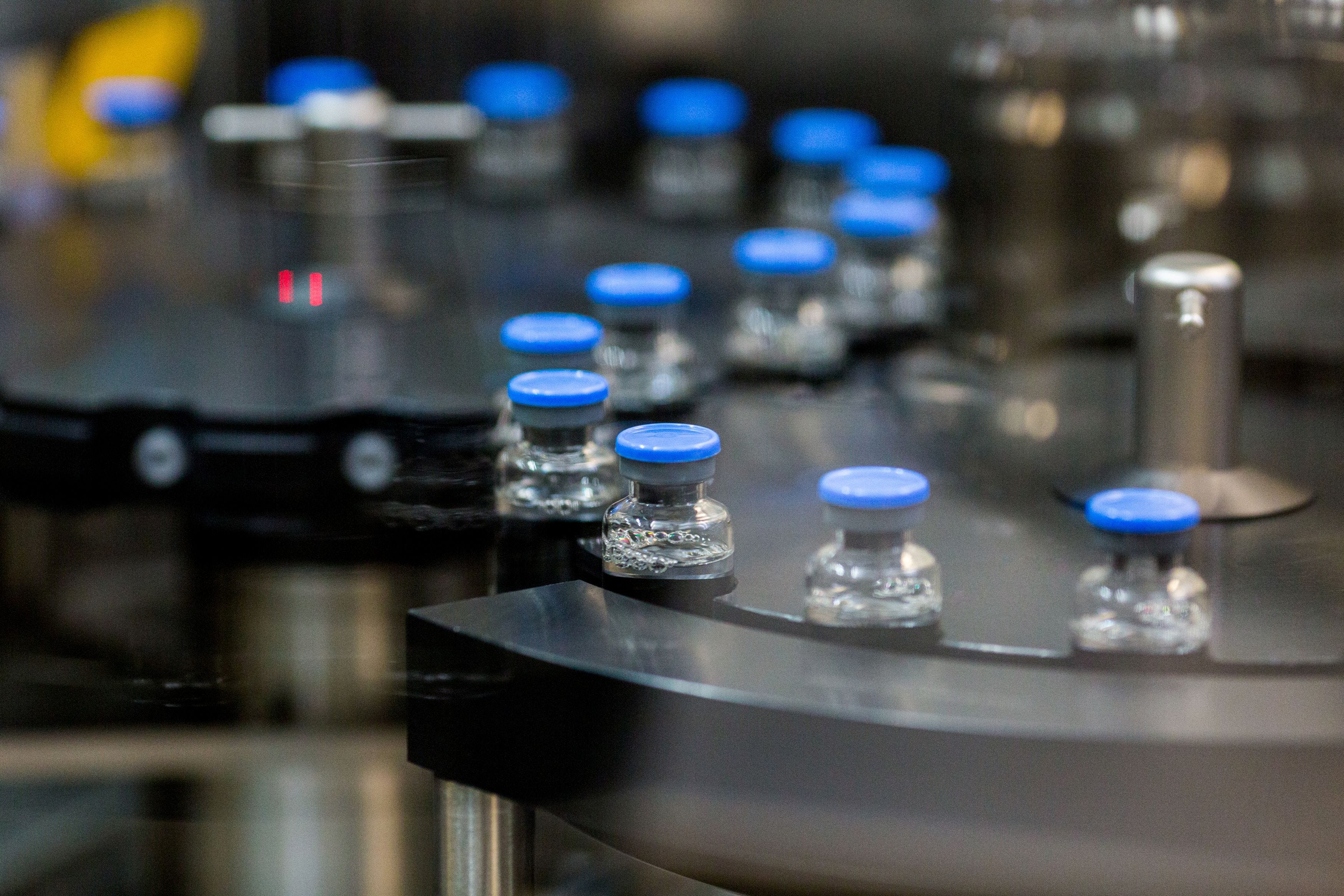 When people came into the ICU with the coronavirus in March, doctors were hamstrung. Their only option was to make patients as comfortable as possible until they either recovered or died.

“We didn’t really have anything other than supportive therapy,” Dr. Panagis Galiatsatos, a pulmonary physician at Johns Hopkins Bayview Medical Centre, told Business Insider, “which would be giving them oxygen if their oxygen was low, breathing devices if they were struggling to breathe, fluids if they were dehydrated â€” that was it.”

Treating patients is getting easier now that a few therapies have been approved for severe cases, he said.

For the sickest individuals, doctors can prescribe dexamethasone, a cheap steroid that’s been shown to significantly reduce mortality among critically ill COVID-19 patients. A recent analysis from the World Health Organisation found that corticosteroids in general can lower death rates among these patients.

“We’ve gotten really good at knowing when to pull the trigger for those,” Galiatsatos said.

Researchers are still looking to add more tools to that arsenal â€” particularly when it comes to treating less severe cases. Hundreds of experimental COVID-19 therapies are being developed and tested. In the last few weeks, a spate of promising results have brought attention to two types of potential treatments: new antibody drugs and repurposed rheumatoid arthritis medications.

One antibody drug, from pharma giant Eli Lilly, was found to lower the chances that a COVID-19 patient requires hospitalisation. Another, from the biotech company Regeneron, seemed to lower the amount of the virus detected in non-hospitalized patients.

But some of this data still needs review, and more research is needed before any of the companies can seek emergency approval.

Here’s what to know about the newest developments in the race for COVID-19 treatments.

Eli Lilly’s antibody drug may reduce the risk of hospitalisation Neutralising antibodies are our body’s natural response to a foreign pathogen. Anthony Fauci, director of the National Institute of Allergy and Infectious Diseases, has called them “the gold standard of protection against a viral infection.”

To make an antibody therapeutic, scientists hunt for the most potent antibodies among a large pool, then clone and produce those antibodies at scale.

In June, Eli Lilly’s antibody drug, LY-CoV555, entered a phase 2 trial among people with mild to moderate COVID-19. The company announced preliminary results in September: Of more than 450 newly diagnosed patients, only 1.7% of those who got the drug were hospitalized, compared to 6% of patients who got a placebo. That’s a 72% lower risk of hospitalisation.

“Since these are the first clinical data we’ve seen from neutralising antibodies, I find the results quite encouraging,” Eric Topol, a cardiologist who directs the Scripps Research Translational Institute, told Science Magazine.

This class of antibody drugs, he added, “represents our best shot for a near-term, potent intervention, even though they are difficult to produce at scale and will likely carry a high cost.”

There are still reasons to be sceptical, however. The results haven’t been vetted yet by independent scientists or published in a peer-reviewed journal. Eli Lilly also hasn’t confirmed whether they were statistically significant. 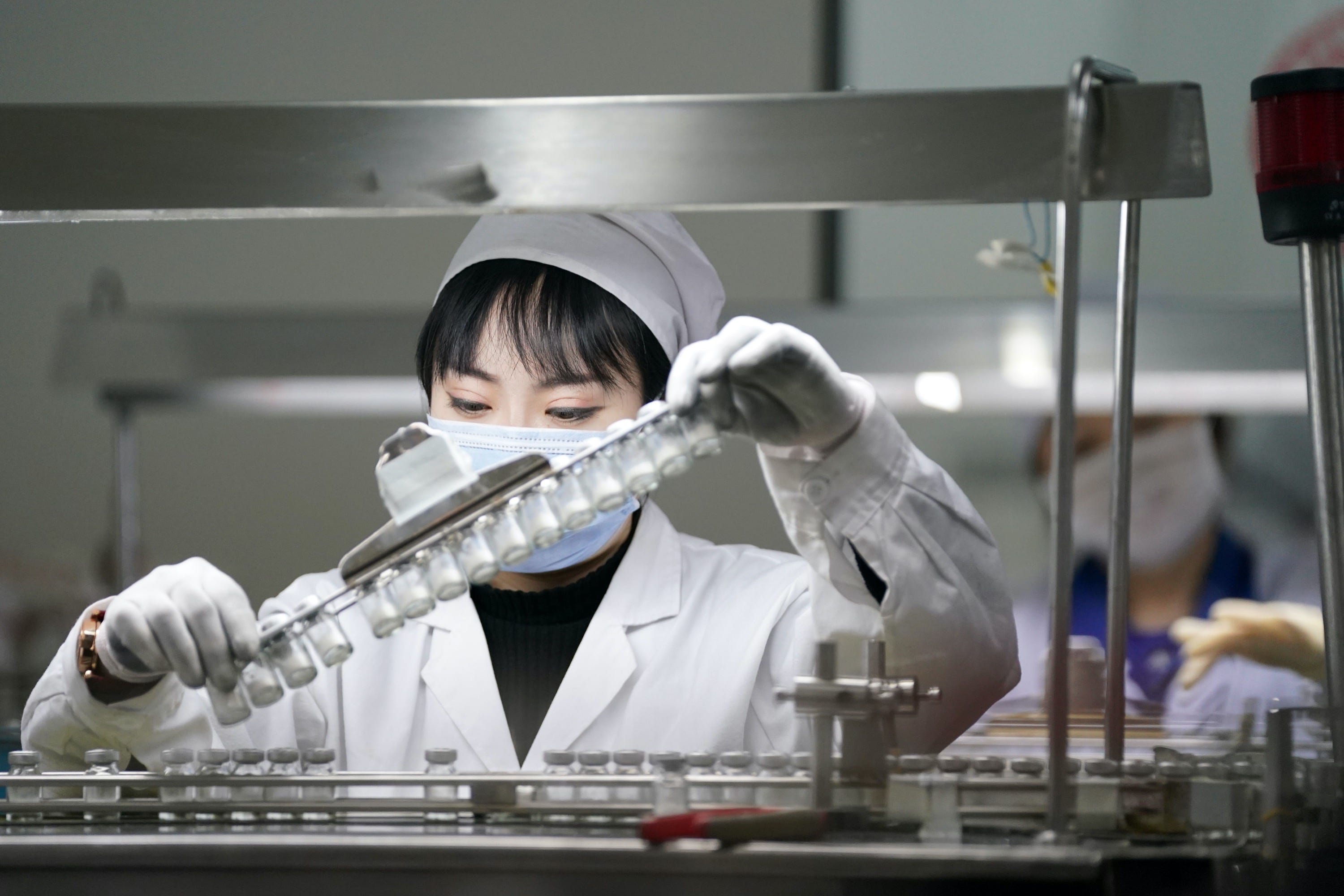 Xinhua/Wang Jianwei via Getty ImagesWorkers at a pharmaceutical factory in northeast China’s Heilongjiang Province on March 2, 2020.

Regeneron started clinical trials for REGN-COV2, its two-antibody cocktail, in June. On September 29, the company announced that the drug had reduced the viral load â€” the amount of virus in a person’s body â€” among 275 non-hospitalized patients. Those who got the treatment also saw their symptoms resolve more quickly than those who received a placebo.

“The greatest treatment benefit was in patients who had not mounted their own effective immune response, suggesting that REGN-COV2 could provide a therapeutic substitute for the naturally-occurring immune response,” George Yancopoulos, Regeneron’s president, said in a statement.

The antibody cocktail is also being studied in one of the world’s largest clinical trials of COVID-19 treatments: the University of Oxford’s Recovery trial.

“The Recovery trial was specifically designed so that when promising investigational drugs such as REGN-COV2 became available, they can be tested quickly,” Peter Horby, the trial’s chief investigator, said in a September statement. “We are looking forward to seeing whether REGN-COV2 is safe and effective in the context of a large-scale randomised clinical trial.” 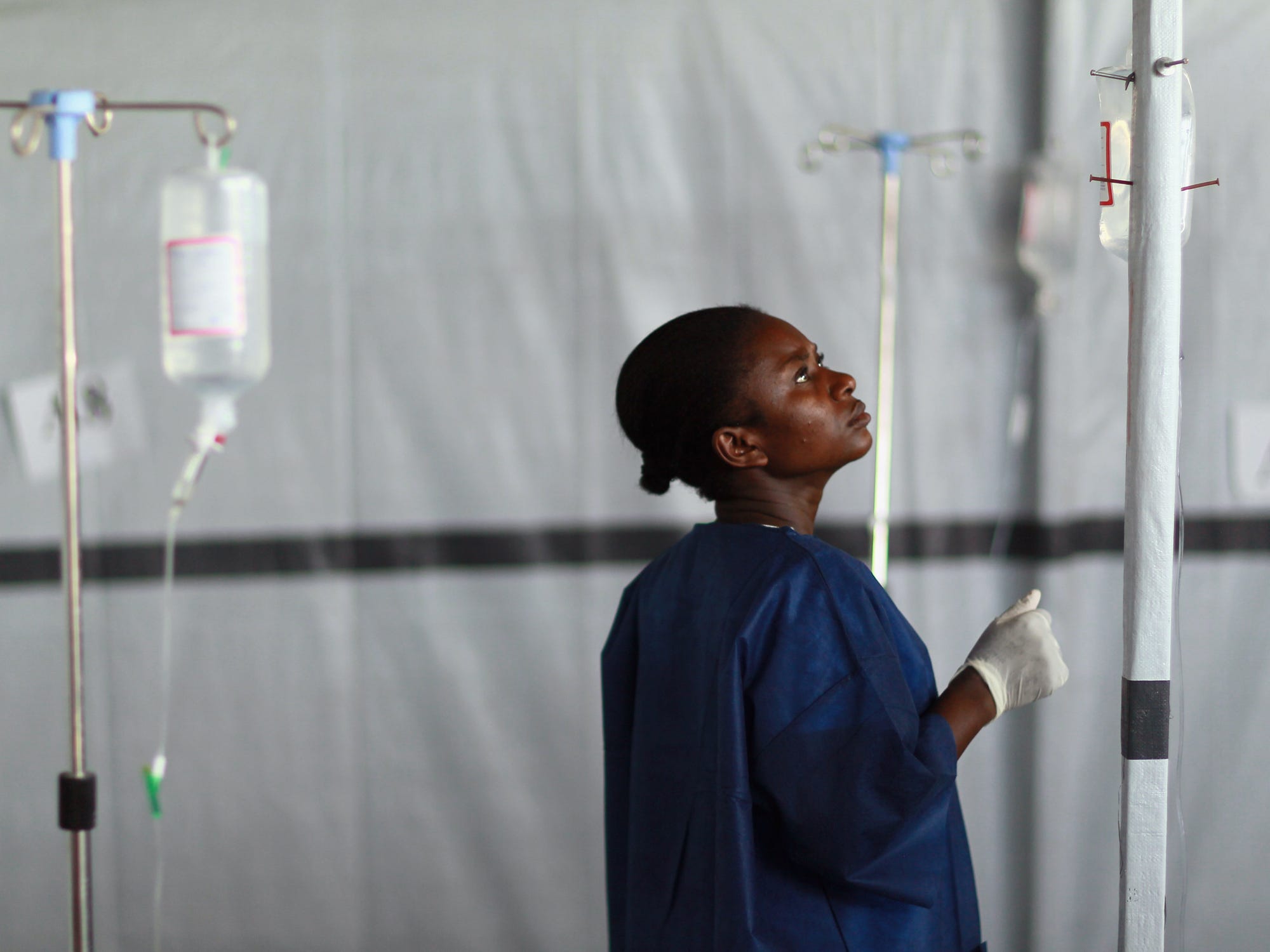 Scientists have a few theories about why some coronavirus patients make a rapid turn for the worse. One is that an aggressive immune response leads the body to attack its own cells â€” what’s known as “cytokine storm.” Cytokines are small proteins that can trigger immune activity and inflammation in the body.

Actemra did not reduce mortality among hospitalized COVID-19 patients in a phase 3 trial that ended in July. But on September 18, Roche announced that the drug was found to reduce the need for breathing machines in a different study.

Over 28 days, only 12% of patients who received the intravenous drug required a breathing machine, compared to 19% of those who got a placebo.

About 85% of the nearly 390 study participants were Hispanic, Black, Native American, or identified with another ethnic or racial minority group. That makes the trial the first global, phase 3 clinical study of a COVID-19 treatment that enrolled mostly minority patients. 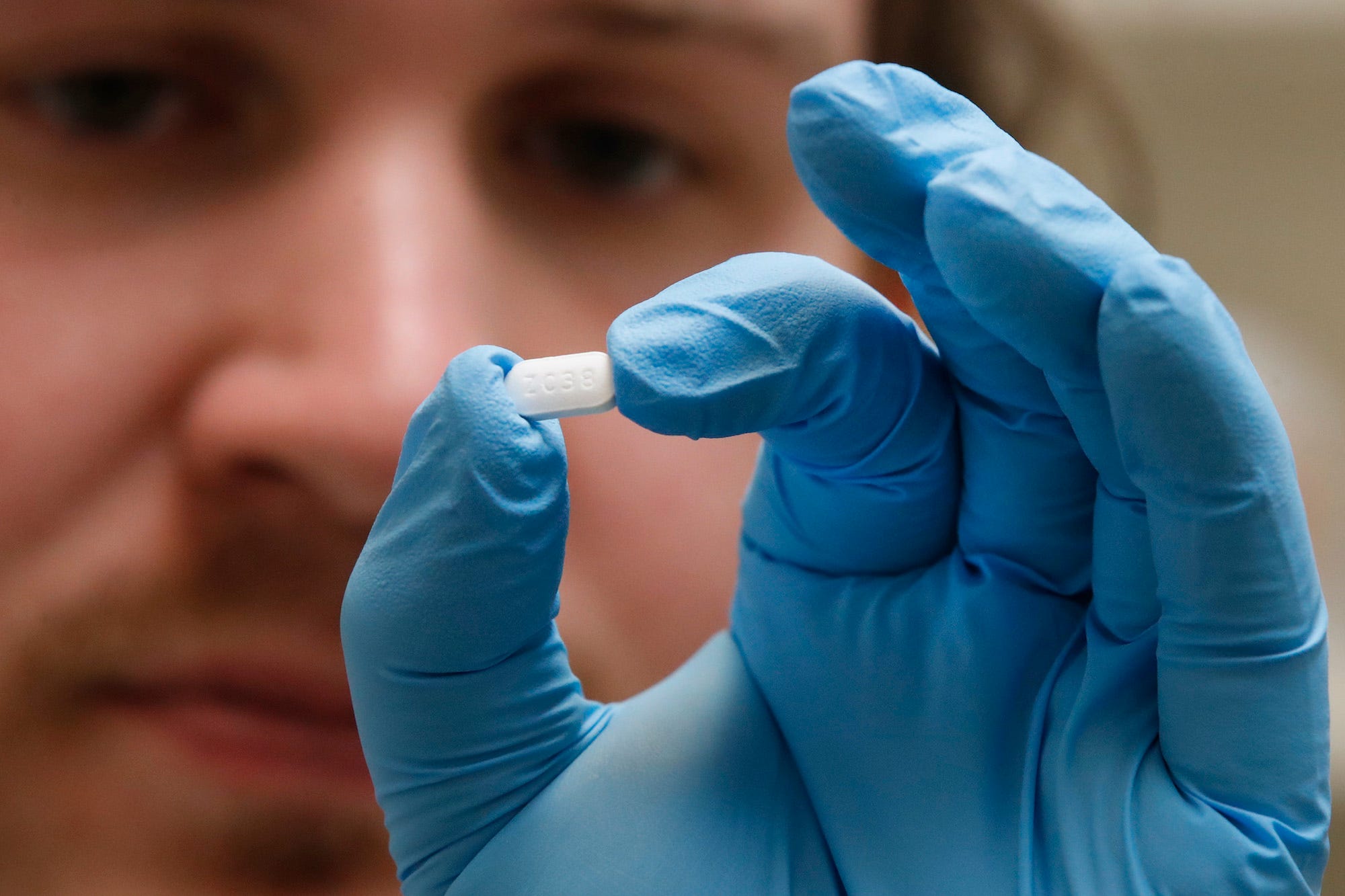 GEORGE FREY/AFP via Getty ImagesA pharmacy tech holds a pill in Provo, Utah, on May 20, 2020.

The drug, administered in pill form, is showing early promise as a COVID-19 treatment when combined with remdesivir.

The combo entered a phase 3 trial in May that involves more than 1,000 hospitalized COVID-19 patients. Last month, Eli Lilly announced that together, Olumiant and remdesivir reduced patients’ average recovery time by one day compared to patients who only received remdesivir.

The results put the company a step closer to seeking emergency authorization from the FDA.

A WHO analysis found steroids could lower mortality 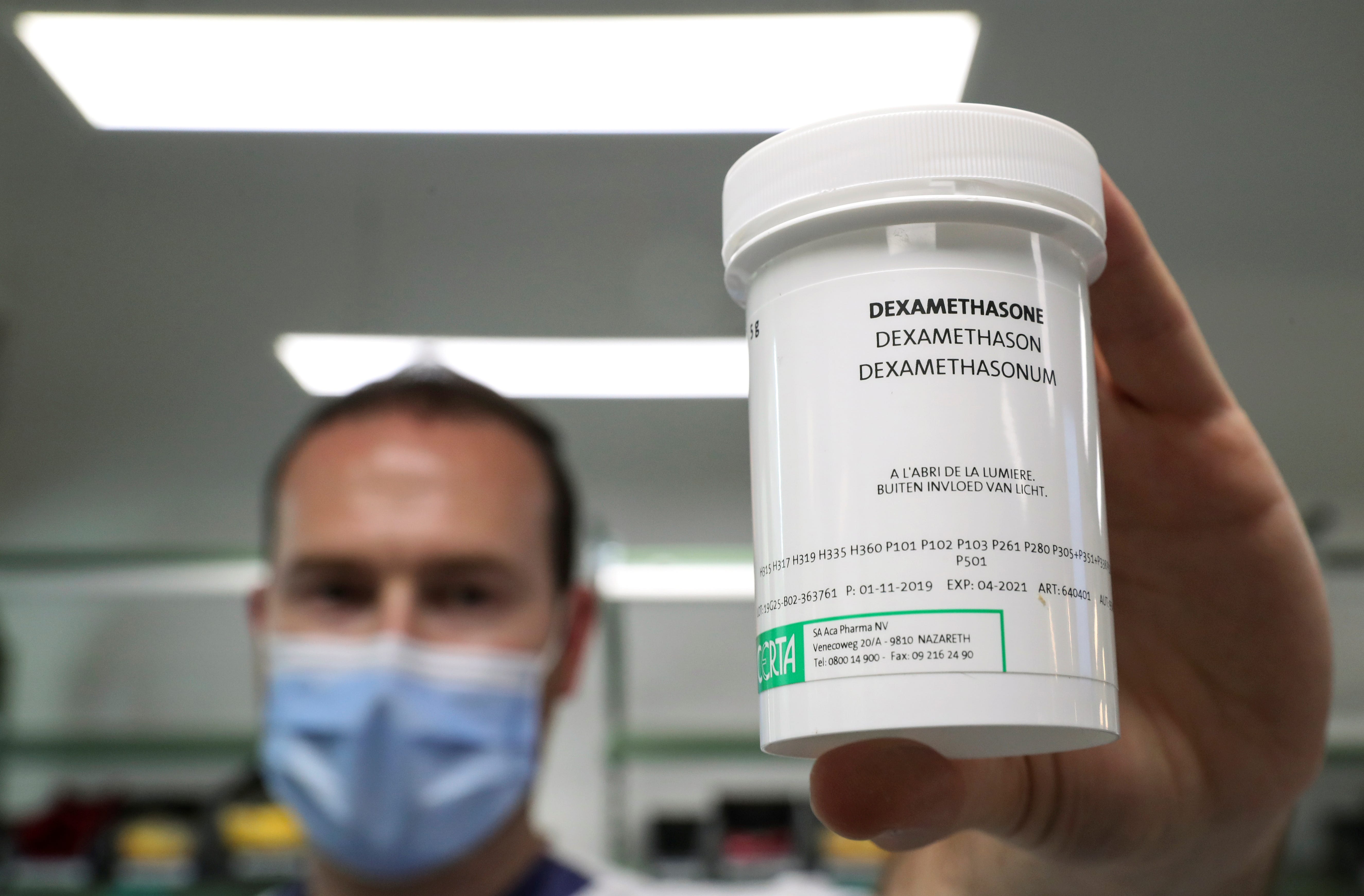 ReutersA pharmacist displays a box of dexamethasone at the Erasme Hospital in Brussels, Belgium.

US treatment guidelines already recommend giving the corticosteroid dexamethasone to patients who are on ventilators or need oxygen support.

A major UK trial found in June that dexamethasone reduced the number of deaths by one-third for people on ventilators, and by 20% among patients who were getting extra oxygen. A Brazilian study also found that patients who took dexamethasone spent fewer days on a ventilator.

Research suggests other corticosteroids could be effective, too.

A WHO group analysed seven trials of corticosteroids that in total involved more than 1,700 critically ill COVID-19 patients. Some received dexamethasone, while others received hydrocortisone or methylprednisolone. Overall, the researchers found fewer deaths among patients who received the steroids relative to those who received standard care or a placebo.

That led the WHO to issue a “strong recommendation” for the use of steroids.

This story has been updated with new information. It was originally published September 23.