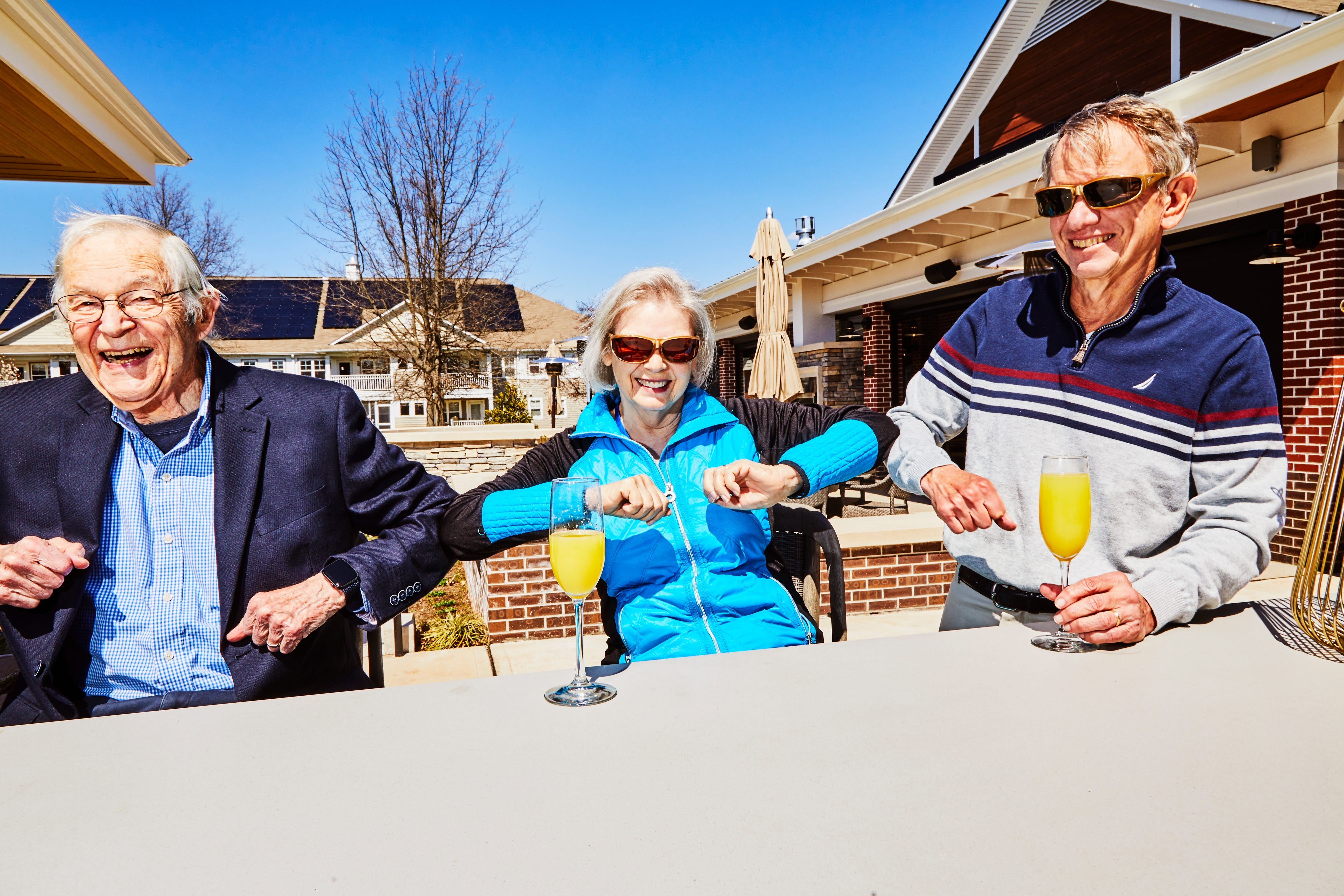 Just over a year into the pandemic, senior residents at Fellowship Village, a 62-and-over continuing care retirement community in New Jersey, are starting to date again.

“There’s definitely an upswing in romances,” resident Helen Beglin, a convivial 81-year-old who still practices as a minister, told Insider. “I’d say that since our being vaccinated, some people have felt more comfortable about getting closer to another person.”

Nestled in Basking Ridge, a well-to-do town about an hour outside of New York City, Fellowship Village looks like a TV set designer’s vision of the picture-perfect suburb, with lush green lawns, a tranquil pond, winding drives leading to apartment complexes, and standalone homes with beige siding and white trim.

Before the novel coronavirus swept across the country, life was like “going back to college,” said Judy Pasnik, a 79-year-old resident sporting a FitBit and close-cropped white hair. “Dinner time is like a party … you sit with different people every night, everybody’s talking and sharing.” 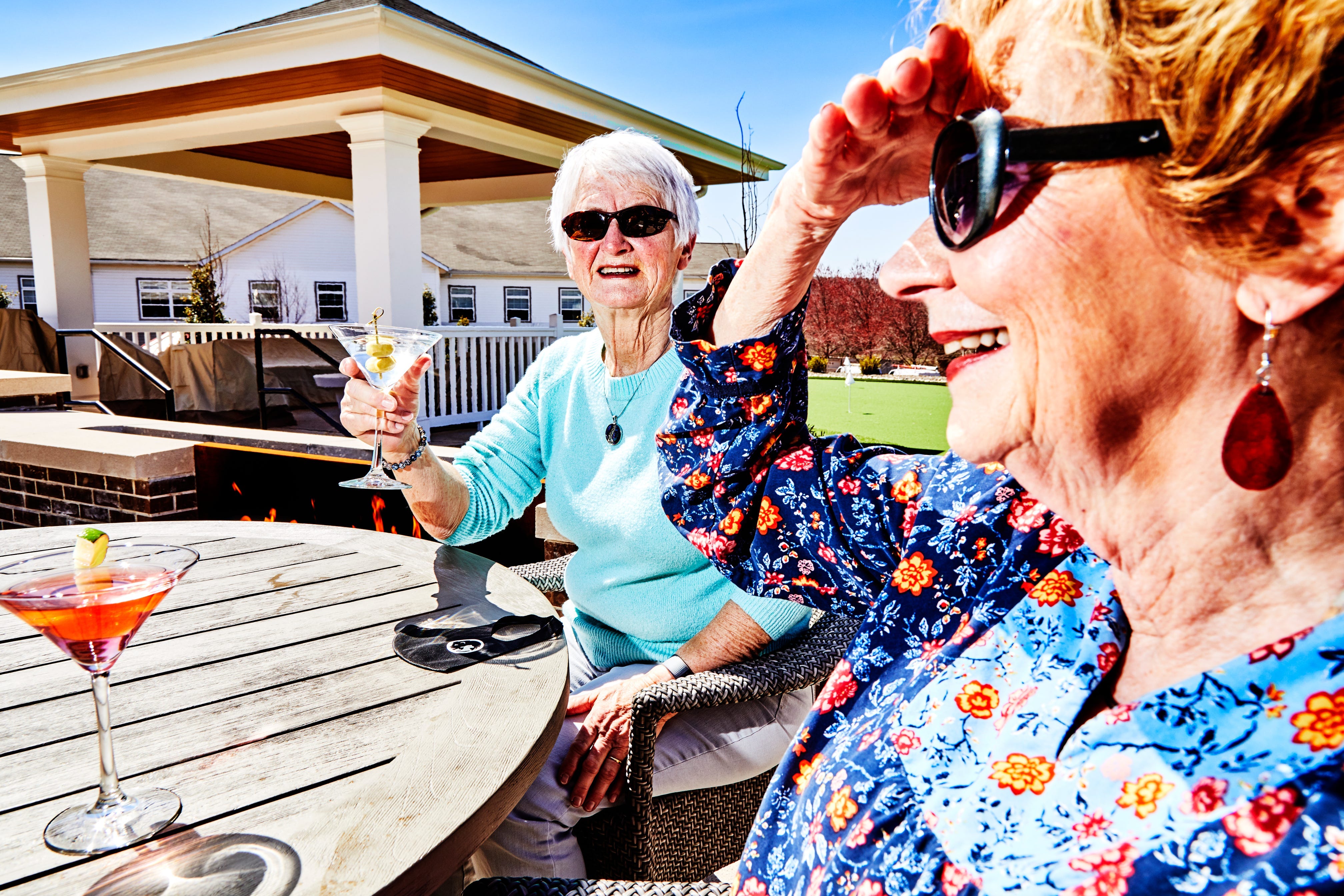 Then March rolled around. The social dinner scene shifted to takeout, the robust slate of exercise classes – tai chi, water aerobics – and upcoming cultural events – a performance by the New Jersey Ballet – were cancelled, with no eye toward a return date, save for the in-house TV channel with some fitness classes and performances.

As the pandemic wore on, however, Fellowship became, in many ways, an exception to the tragic national story of senior living facilities during the pandemic. New Jersey in particular had one of the highest death rates among nursing home and long-term care residents of any state: eight out of every 10 Covid-19 deaths were among people over 65.

The infection rate among Fellowship Village’s 400-plus residents – who range from nursing home patients to active seniors in independent living – was low, with just 35 cases and five deaths at the time of this writing. (Staff infection rates were higher, with 117 cases among roughly 500 staff members.) Basking Ridge’s Somerset County has also fared significantly better than denser regions of the state. 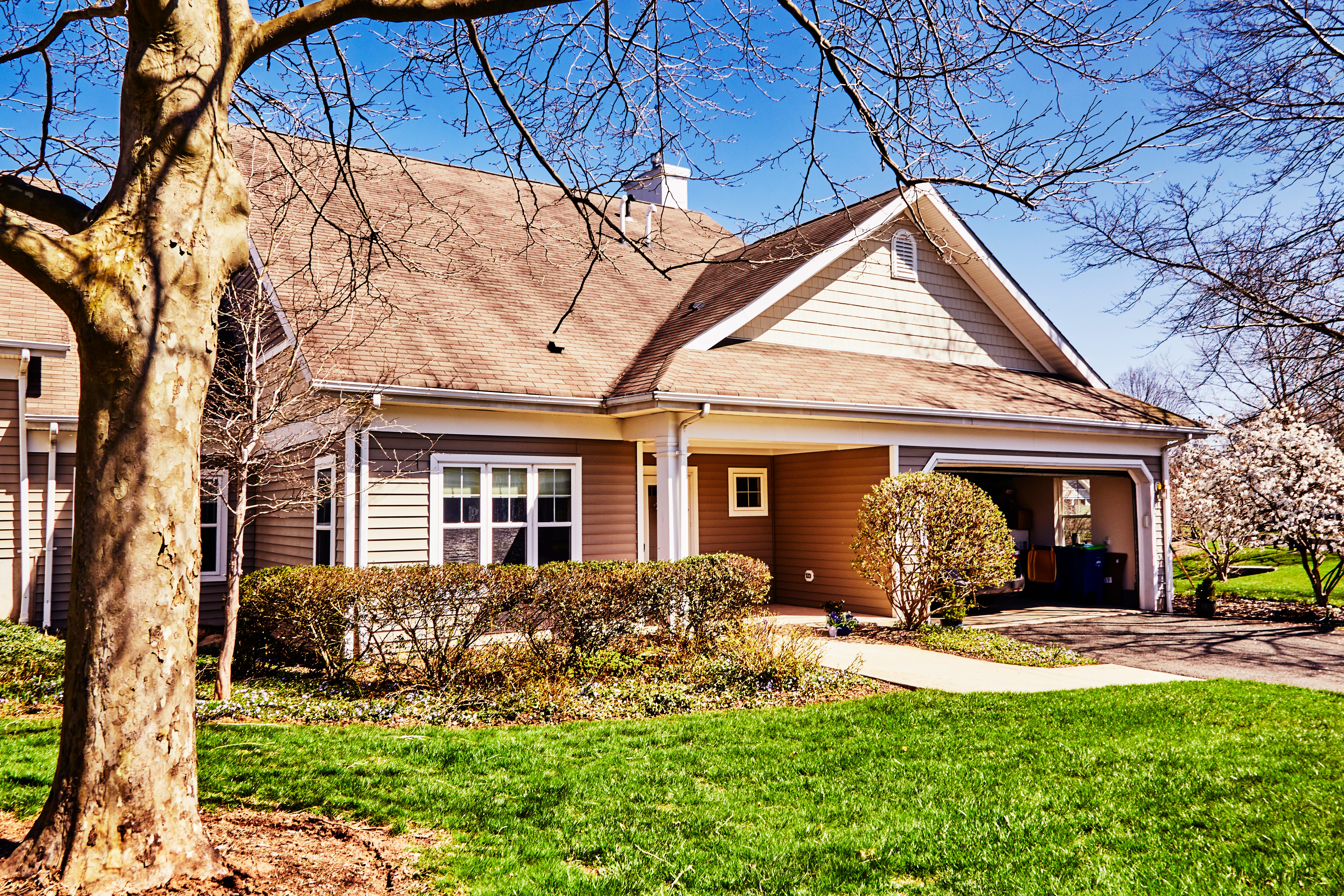 Amy Lombard for InsiderA home in the independent living community.

Now, with more than 99 percent of the residents inoculated against the virus, Fellowship – and senior living communities across the country – is slowly returning to normal life. In many ways, it provides a roadmap for what the rest of the country can expect as more of the general population gets vaccinated.

On a recent weekday in April, Fellowship’s 72-acre campus hummed with signs of life.

A small group of women sat together knitting, crocheting, and chatting from behind their masks in the Stevens Great Room, itself reminiscent of an upscale hotel lobby with its velvet wingback chairs, plush carpeting, and floral arrangements.

Residents stopped to say hello at the front desk as they picked up mail and asked about upcoming activities. Posters hanging outside the arts center were a portal to what seemed like another dimension entirely, showcasing spring 2020 performances of “Driving Miss Daisy” and “Arsenic and Old Lace.” Inside the theater, small, socially distanced clusters of empty chairs face the stage. A sign at the entrance of Wilson’s, a new tapas bar that opened last fall, before the second wave bore down, advertised the cocktail of the day: “Let’s Go Tanning,” a citrusy concoction of vodka, triple sec, grenadine, and orange juice. 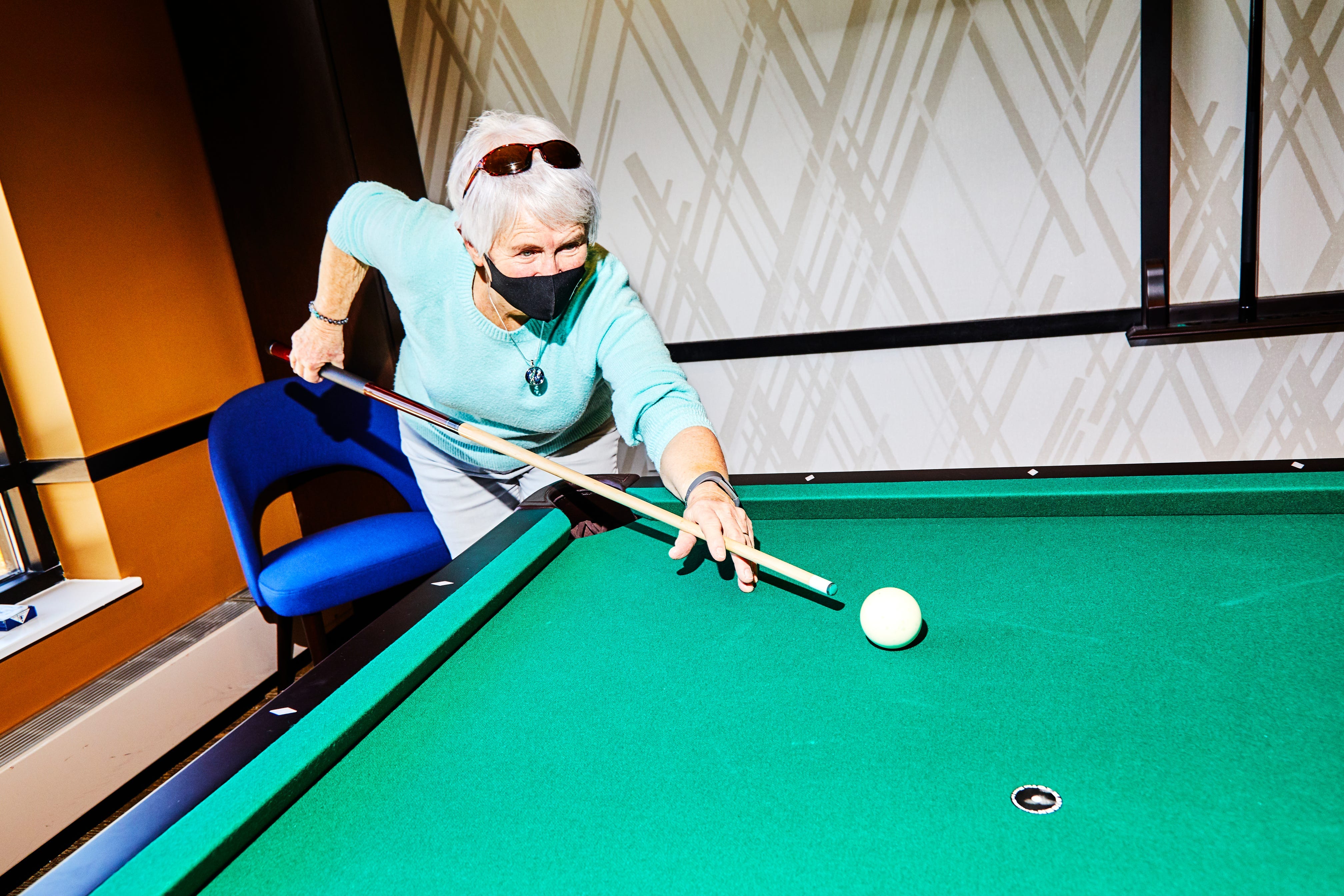 These days, the community’s activity roster is a mix of virtual and in-person, from an online lecture on the paintings of Renoir to a wine pairing event held outdoors and a piano performance in the theater. Fellowship’s independent living community has also implemented another measure that could soon become standard practice across the country: vaccine passports. “It really makes a huge difference in your spirits,” Judy Pasnik said of being able to have her son and sister visit more freely. Helen Beglin was also able to visit her Brooklyn-based children overnight this spring, after getting vaccinated.”I was exhilarated,” she said. “It was absolutely wonderful.”

Just a year prior, the community was entirely closed to visitors. (It even stopped mail delivery for a period after their postal carrier refused COVID-19 screenings and temperature checks.) “I think the CEO and staff here were concerned about [the virus] earlier than then residents were,” Beglin said. She remembered receiving an email from Fellowship CEO Brian Lawrence in early March about monitoring the virus and potential precautions. “I think a lot of us read it and thought, ‘My goodness, he’s being overreactive.'”

Unlike many long-term care communities, the administration at Fellowship acted swiftly – partly, it appears because they had the financial capability to do so. Life at Fellowship, like most continuing care communities, doesn’t come cheap, with entrance fees just under $200,000. As a nonprofit, Fellowship can reinvest in care instead of paying dividends to investors. With a resident population that’s able to afford the cost, and appears largely white – Fellowship said it doesn’t collect racial demographic data – the community’s socio-economic and racial makeup mirrored national trends in terms of the pandemic’s impact. 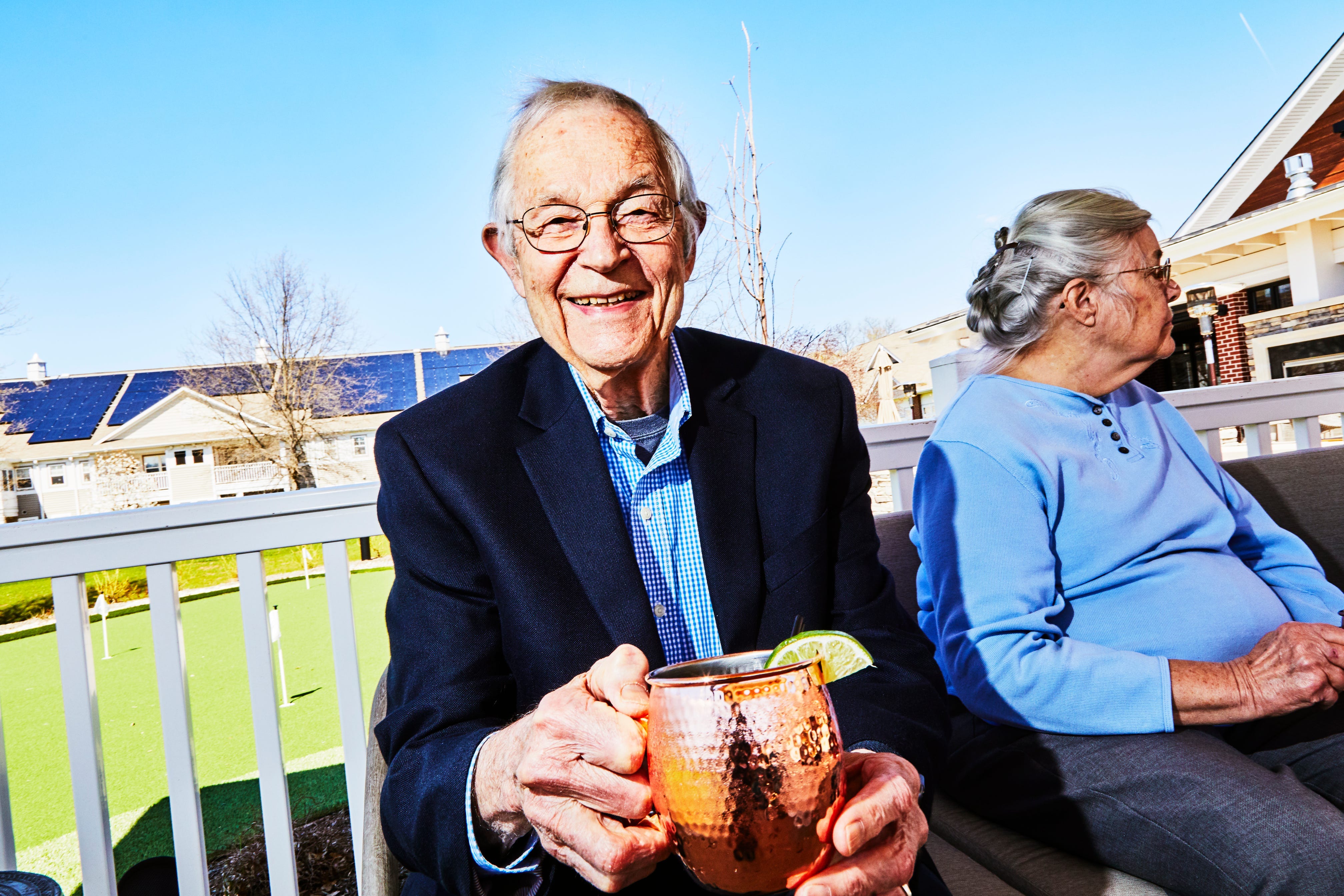 By March 17, four days before New Jersey Governor Phil Murphy issued a stay-at-home order, Fellowship began implementing precautions, closing to visitors and ending indoor dining. Meanwhile, the state-run Menlo Park Veterans Memorial Home, just 35 minutes away, became one of the deadliest sites for COVID-19 in the country, with over 100 deaths. Pat and Steve Pozarek have only ever experienced pandemic life at Fellowship. They moved in late August, at the end of the summer’s reprieve in cases and before the second wave began in the fall. Through outdoor dining and outdoor interactions, they’ve gotten to meet some neighbors, but they’re excited for more quality socialization.

“At least we got to know what people look like from the nose up,” said Steve, 71, clad in khakis and chunky white New Balance sneakers. Pat, 77, sporting a gray bob and large sunglasses, was more skeptical. “It’s very nice to be able to sit at an adjacent table, but when you have to shout everything across six feet of space, you just don’t get to share close information about each other.” Amy Lombard for InsiderPat and Steve Pozarek take a walk.

While the Fellowship administration has worked to encourage satisfaction and compliance by avoiding strict lockdowns as much as possible, there’s still some chafing against the restrictions that remain, such as masks in communal spaces and the ban on indoor dining. It echoes thorny debates happening around the country.

“It’s hard to get people to accept the fact that [the vaccine] doesn’t entitle you to go anywhere and do anything,” said Ron Whalin, 83. He said he and wife Bert, who serve on several resident committees, heard from neighbors who were “very, very angry,” about the community’s Easter dinner, which was takeout only. “We got so many calls,” Ron recalled. 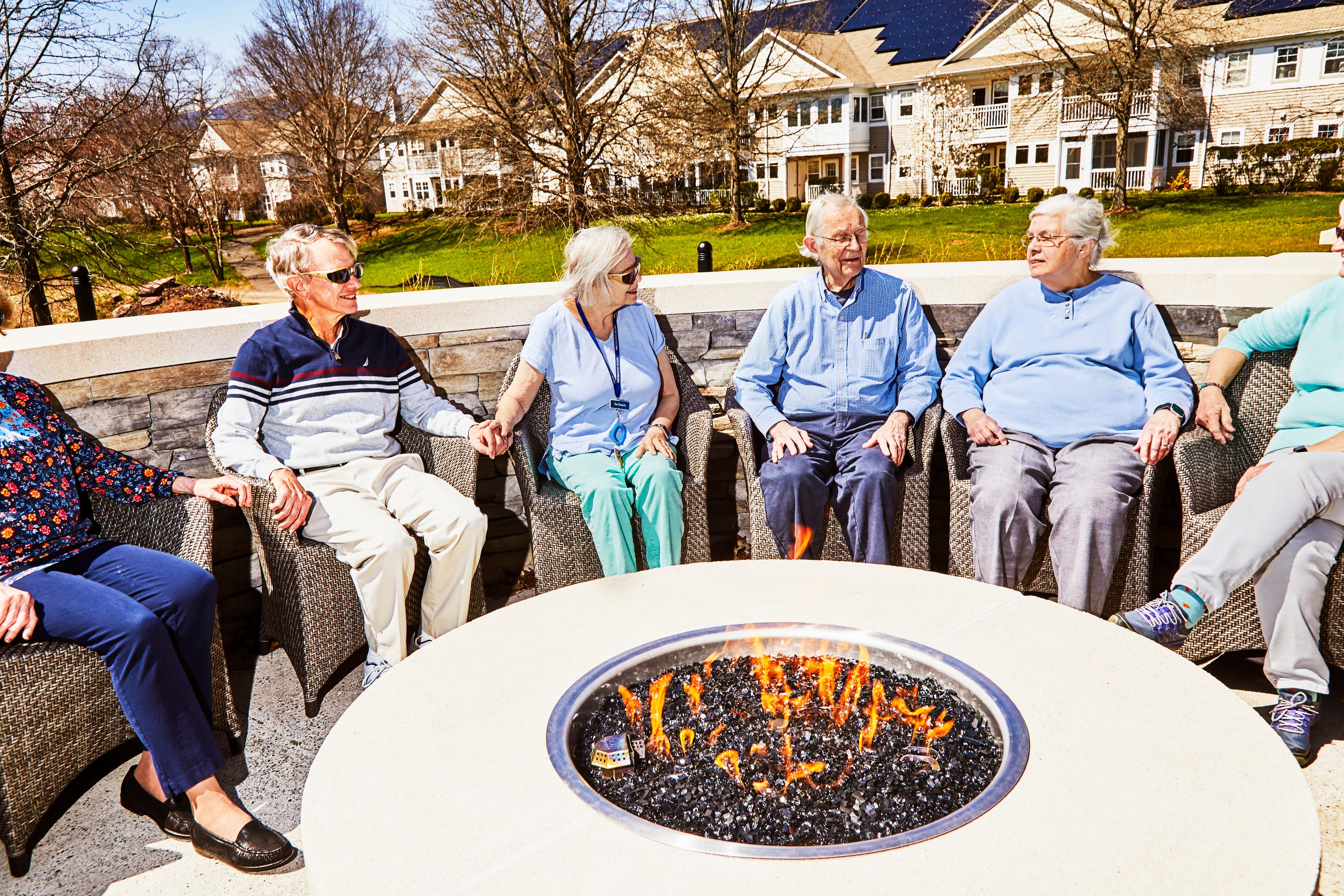 “I know the state is opening up more, but that’s more economically driven, and it’s not necessary for this demographic,” CEO Lawrence said, noting concerns about the spread of potential variants that might render vaccines less effective. While he’s no longer working every weekend to keep the residents safe, the specter of the virus remains a constant threat.

In early April, they recently had a new staff member test positive just before she had her first vaccine appointment, and are continuing to test staff members weekly, though they’ve stopped regularly testing residents since the vast majority are vaccinated. Lawrence said that the theater is booking acts beginning in October of this year – “hopefully we’re right.”

While residents are once again clamoring to feast on kobe beef sliders at the tapas bar and a charity golf outing is in the works for June, Fellowship’s gradual and subdued return to “normal,” whatever that word now means, might provide some clues for the rest of the country, which is still facing lingering uncertainty over the variants and the rest of the globe’s vaccination progress, while still trying to process the profound losses of the past year. 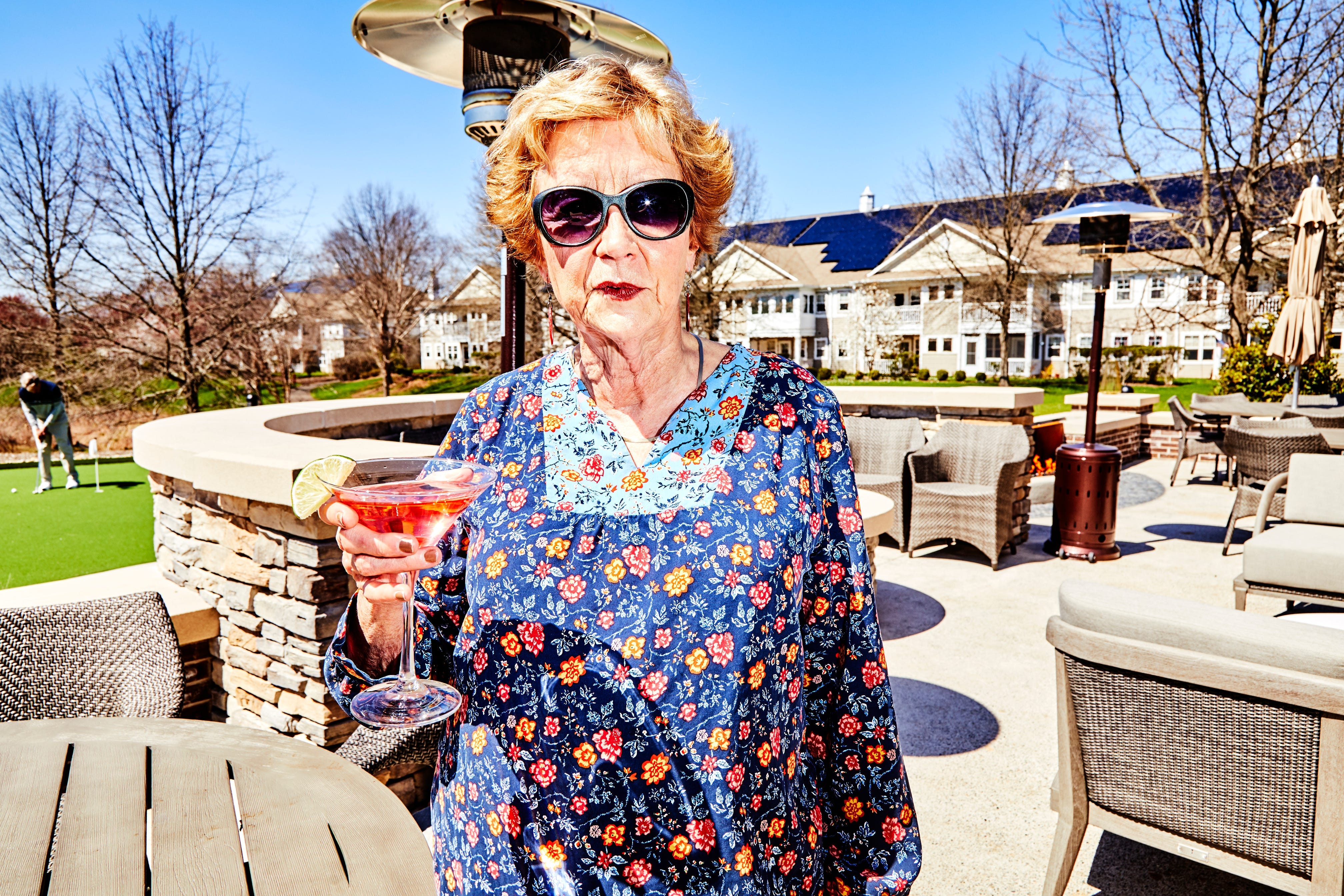 Amy Lombard for InsiderHelen Beglin with a ruby-colored cocktail.

“Almost four years ago, well before COVID, when I lost my husband, it was tremendously helpful for me to not just have the friends and family that I had all along, but to be living in a place where people know about it and are with you in so many ways,” Beglin said. “In this period of isolation and death… people here have just felt it’s important to reach out to one another.”

Lauren Vespoli is a Brooklyn-based writer and editor who focuses on culture and history. You can find her on Twitter.

Amy Lombard is a photographer living and working in Queens.