In cities across America over the past several days, many police officers rioted.

Wanton acts of violence were committed. Rights were callously violated. The rule of law was abandoned.

To be sure, there were plenty of good and noble acts by the police over the weekend. Some police chiefs marched peacefully with protesters; others made it a point to directly engage in dialogue with their community. Countless officers protected innocent people and their property and also did their best to ensure as safe an environment as possible for peaceful protesters.

No cops deserved to be attacked with projectiles. This shouldn’t be controversial.

The violence and property damage associated with the civil unrest are inexcusable. The looting is indefensible. Both do incredible damage to any cause seeking justice, especially ones fighting to end police brutality and reform the criminal-justice system.

None of that makes analysing the events of the past few days, the underlying causes, and the motivations of the participants any easier. Far from a binary good-versus-bad determination, there are myriad issues to unpack. But any conversation focused only on the riots and looting and not law enforcement’s penchant for excessive force and institutional resistance to accountability is both disingenuous and unserious.

For the moment, I’m going to focus on the institutional rot at the heart of policing in this country, in which the privileges afforded to law-enforcement officers allow them to break the law, abuse their authority, and hurt innocent people.

These privileges are codified into police-union contracts with governments and backed up by the conservative interpretation of an 1871 law known as Section 1983.

Under the interpretation, which protects police officers from facing liability in civil courts for violating citizens’ civil rights, those who feel their rights have been violated by a police officer need to prove that a nearly identical situation was ruled a violation of civil rights in the same jurisdiction for the courts to even consider revoking so-called qualified immunity from the officer accused.

In Minneapolis – the city where the nationwide unrest was sparked by the killing of George Floyd, a black man who died May 25 after Derek Chauvin, a white police officer, knelt on his neck for over eight excruciating minutes – members of the police and the National Guard marched through a quiet neighbourhood as if it were Fallujah in 2004.

The militarised police barked orders at citizens, commanding them to go back into their homes. Even though the city’s curfew specifically allowed for residents to be outside on their own property, one officer took a look at a small group of women on a front porch and said, “Light ’em up,” before one of his colleagues fired paint canisters at them.

They were on their front porch. They were observing curfew rules. The cops were the lawbreakers.

Another Minneapolis officer performed a drive-by pepper-spraying of peaceful protesters and media members in broad daylight.

As violence erupted in at least two dozen US cities, some of the worst instincts of law enforcement were on display.

In Louisville, Kentucky, the police seized and destroyed a substantial amount of bottled water being used for the relief of peaceful protesters.

In Salt Lake City, an armoured police officer who had no crowd to disperse still felt compelled to walk directly toward an elderly man with a cane and shove him to the ground.

In New York, two New York City Police Department vehicles plowed through a barricade and into a crowd of protesters. A young man with his hands in the air had his mask pulled down by an NYPD officer, who then pepper-sprayed him at point-blank range. And in at least one attempt at crowd clearance, officers manhandled and assaulted anyone in their way.

In Charleston, South Carolina, a young man among a group of kneeling protesters gave a tearful speech at the armoured cops opposite them. After he pleaded with their humanity, even telling the cops he loved them, a group of officers charged toward the protesters and pulled the speaker into custody. He was arrested while peacefully protesting and exercising his freedom speech.

please watch. please listen closely. if anyone has any information on this man / a link to his go fund me please let me know. this is absolutely not okay. we will not be silenced. pic.twitter.com/t2h6FovmoL

Police officers can often face mortal danger and extreme stress in their line of work. But with the government-sanctioned power to deprive citizens of both life and liberty, they are required to swear an oath that they will be responsible, honest, and lawful in the use of such power.

Police officers, by and large, try to uphold that oath. But police unions and many police departments do everything in their power to make that oath empty words by fighting any legitimate attempts at transparency and accountability when it comes to the use of force.

This has needed to change for decades. Now could be the moment it must.

The Supreme Court should squash ‘qualified immunity’ once and for all

Floyd’s death won’t be in vain if it leads to the Supreme Court finally doing away with the “qualified immunity” interpretation of Section 1983 of the US Code – which essentially provides cover to keep officers from being held accountable in civil courts for violating citizens’ civil rights.

Clark Neily, the vice president of criminal justice at the libertarian-leaning Cato Institute, wrote in The Bulwark that the general conservative interpretation of Section 1983 was a rare – and I’d say cynically hypocritical – instance of the right abandoning its “originalist” approach to the Constitution.

As Neily puts it, victims of police violence have little recourse in the court system “unless they can find a preexisting case in the jurisdiction with nearly identical facts” to their own incident. That puts the onus on victims to prove their rights were actually violated, because a basic interpretation of the Constitution won’t do.

Floyd’s family would essentially have to find a case in which a cop killed someone by kneeling on his or her neck for an obscene length of time to get Chauvin’s qualified immunity waived. The fact Chauvin had at least 18 complaints against him alleging abuse and inappropriate behaviour doesn’t factor into the equation.

Originalists have to contort themselves into pretzels to interpret the statute’s language so it gives law enforcement the exclusive benefit of the doubt in nearly every instance. Essentially, many constitutional conservatives believe in limiting government authority as much as possible, except when it comes to holding the police accountable for abusing their authority. And for now, the courts have backed that interpretation.

Floyd’s killing could change that.

The Supreme Court has the opportunity this week to decide to take on any of the dozens of cases challenging the qualified-immunity interpretation.

But that’s not the only systemic issue preventing any meaningful reforms of police accountability.

Police unions all over the country have negotiated into their contracts all kinds of inappropriate and unjust protections from facing justice for their actions.

The Black Lives Matter-associated group Campaign Zero created a valuable database of police-union contracts that shows “72 of the 81 cities’ contracts imposed at least one barrier to holding police accountable.”

Some of these include a grace period of up to several days after a fatal police-involved shooting before an officer can be interviewed. Others essentially keep disciplinary records from public view permanently.

The militarization of police – fuelled by the Department of Defence’s “section 1033” program that hands over surplus military equipment to local police departments – was curtailed near the end of the Obama administration but restarted in force by the Trump administration.

And then there’s the fact that in this country, it is disturbingly easy for a police officer fired for abuse, corruption, or other causes to find another job in law enforcement. In some states, it’s harder to get a licence to braid hair than it is to be certified as an armed agent of the state.

Thanks to a confluence of public-sector union power, a federalist system of government, and the unwillingness of many local and state governments to keep and share databases containing the names of bad cops who have been fired for cause, bad cops keep working.

According to Teresa Nelson, the ACLU of Minnesota’s legal director, the Minneapolis police union’s boss, Lt. Bob Kroll, told her in 2015 that he saw complaints against officers as similar to fouls in basketball.

“If you’re not getting any fouls, you’re not working hard enough,” Nelson says Kroll told her, as reported in The New York Times.

Chauvin had at least 18 complaints. That’s enough to foul out of three NBA games.

Kroll, according to public records, has had at least 29 complaints made against him.

Lest it needed to be said, policing is not a game, and accusations of abuse are not basketball fouls. Policing, when done incorrectly, destroys life and liberty.

Such a cavalier attitude about the community’s relationship with the police, and the offensively dismissive view of the need for accountability, is a major part of the reason these protests are happening.

Throw in all the incidents of heavy-handed to outright criminal behaviour by law enforcement during this terrible weekend in American history, and it’s clear that change is needed.

When the dust settles, we don’t need a “law and order” bootheel to make things better; we need the political will to demand that the law-enforcement community reform itself away from its occupying-army posture and make its disciplinary records transparent to the public.

If the police won’t reform on their own, we need to summon the political will to fight the police unions – protected by Democrats’ reflexive pro-union posture and Republicans’ knee-jerk fealty to armed authority – and defend the civil liberties of Americans.

Sen. Marco Rubio is on the verge of tanking the defense...

All 91 celebrities who have been revealed on ‘The Masked Singer,’... 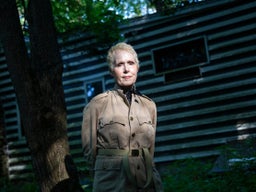