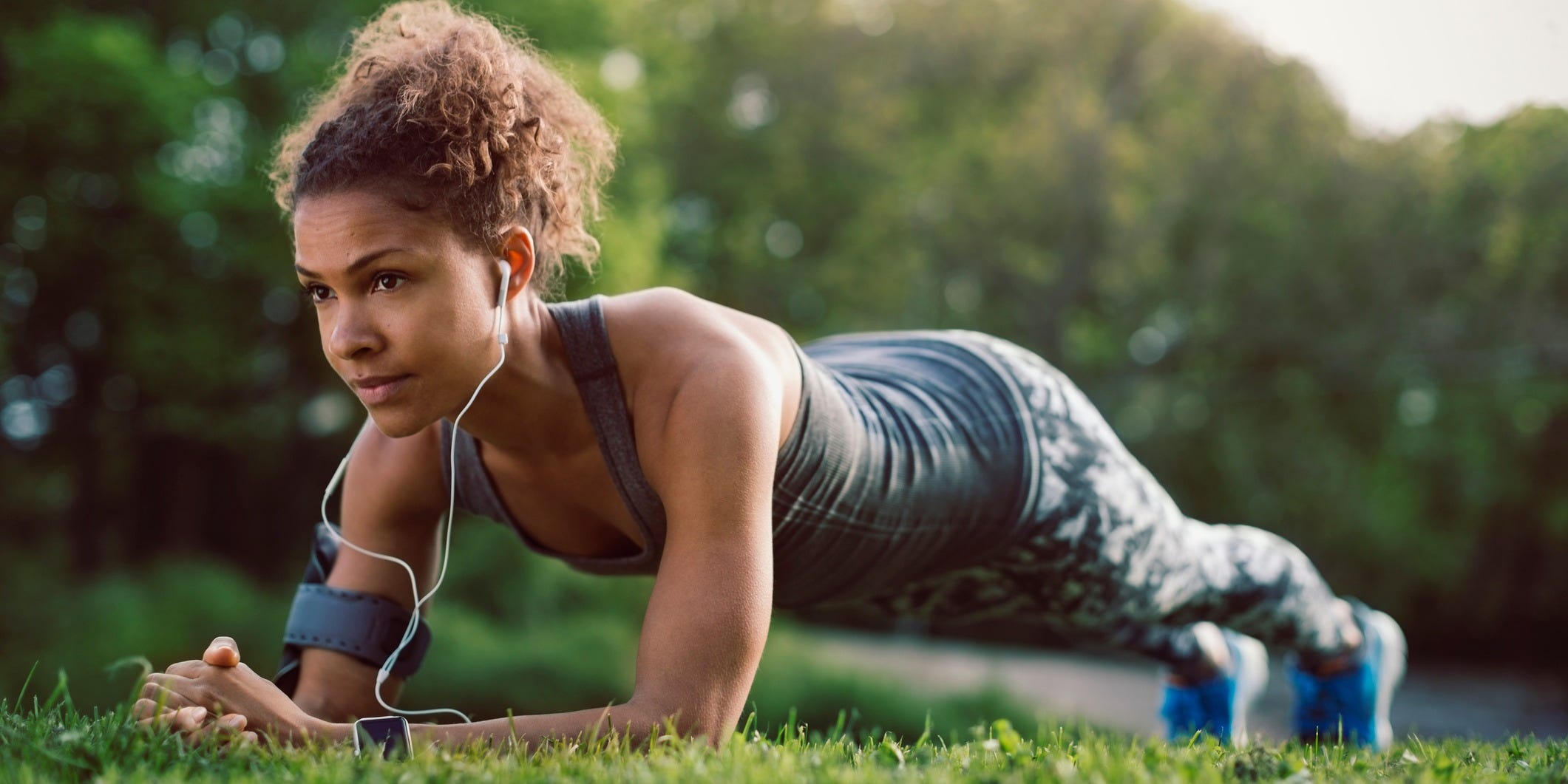 Getty/MaskotPlanks have a wide range of health benefits.

Planks are a great way to strengthen your core and work out many different muscle groups, all at once. You can also do them anywhere – all you need is your body weight.

“The versatility and accessibility makes it one of the most incredible, well-rounded core exercises,” says celebrity trainer Jillian Michaels, creator of The Jillian Michaels Fitness App.

Here’s what you should know about the health benefits of planks and how to do them effectively.

Planks are a full-body workout

Planks don’t just target your abs, but require almost all the major muscle groups in your body to work together. 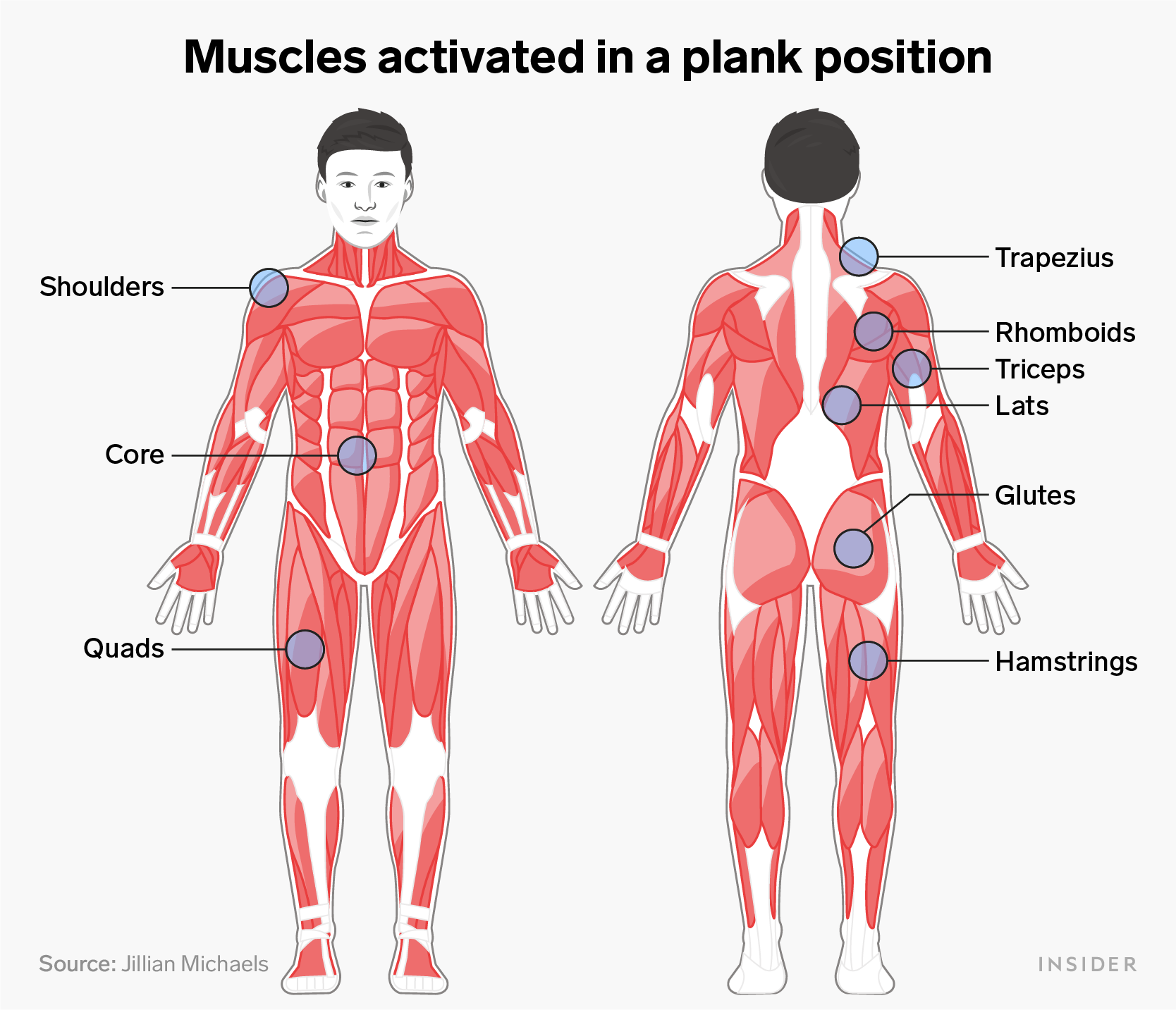 Other exercises like crunches or sit-ups can target the abs and core as effectively as planks, Michaels says. A 2016 study published in the International Journal of Physiotherapy and Research found that both a 30-day plank workout regimen and a 30-day abdominal challenge – consisting of sit-ups, crunches, and leg raises – resulted in an equally effective waist reduction and abdominal skinfold measurement.

But where planks rise above other ab exercises is the way they incorporate other muscle groups. “Working multiple muscle groups at the same time burns more calories and is more time efficient,” Michaels says.

For example, a 2017 study found that people who underwent a doctor-led functional exercise routine after a hip replacement had easier movement and the ability to walk faster when compared to those who didn’t exercise.

Planks can improve your posture

Doing planks can also help improve your posture by strengthening your core.

According to the US National Library of Medicine, having good posture while standing involves standing straight and tall with your shoulders back and your stomach pulled in. That’s very similar to the position you’re in with a plank.

“Planks can absolutely help build better posture because they are conditioning some of the key muscle groups responsible for holding you upright,” Michaels says.

How to do a plank

The basic premise of a plank is to hold your body in a straight line with only your palms and toes touching the ground. 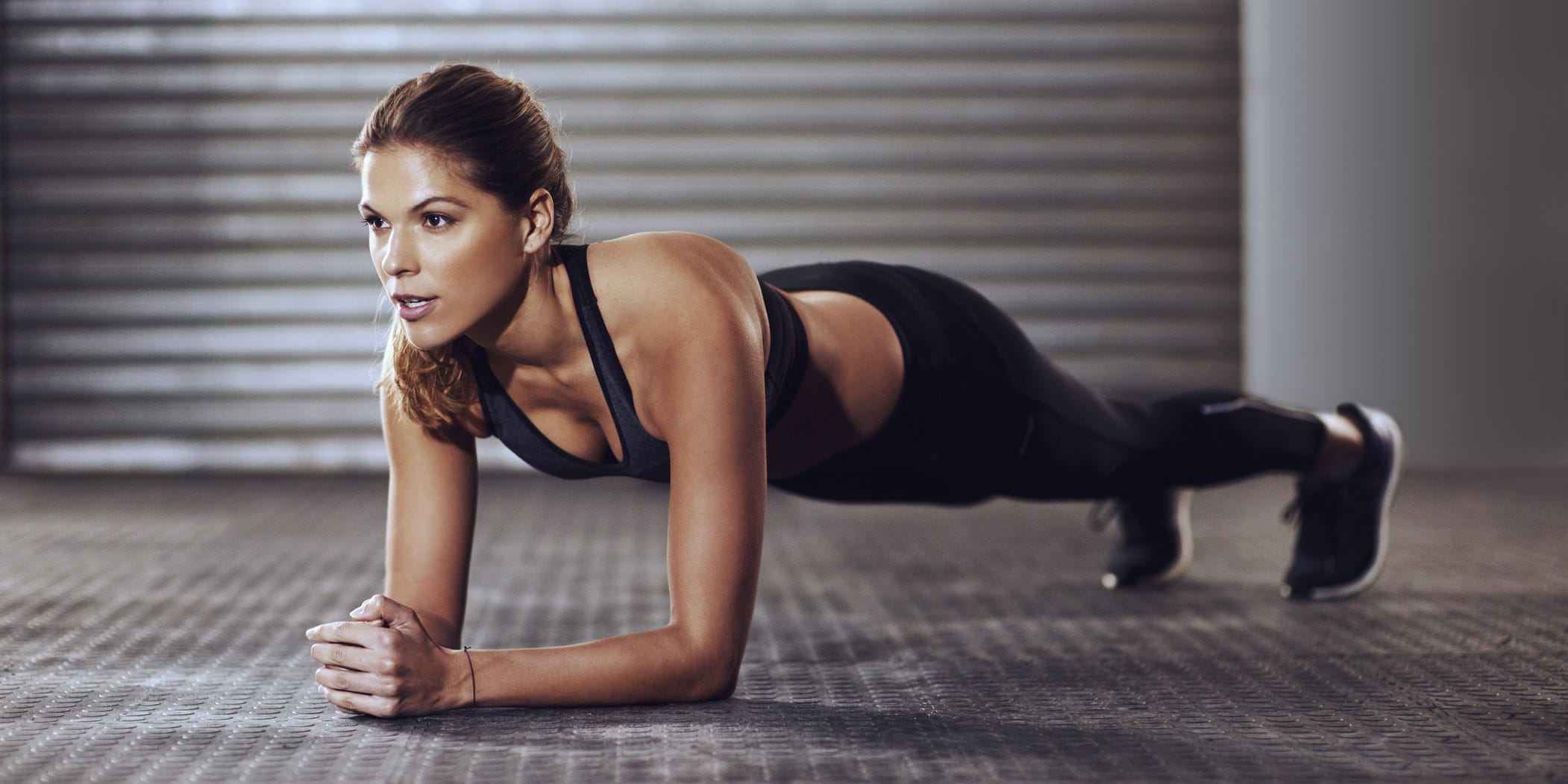 Michaels says you should follow these 8 essential tips to have good form during a plank:

1. Your hands are placed comfortably on the ground, either with your palms on the ground or fists clasped together.

2. Your feet are hip-width apart. You should be balancing on the balls of your feet.

3. Your spine is totally straight.

4. Your tailbone should be tucked so that it’s aligned with your spine, not sticking into the air.

6. Your belly button is drawn in toward your spine.

7. Your lats – back muscles – should be flexed and pulling away from the floor.

8. Your body is in one straight line. “Make sure your lower back isn’t sagging and your booty isn’t popping up,” Michaels says.

“While in the position, don’t look for cheats to make it easier – instead look to squeeze each muscle for an even greater contraction,” Michaels says.

It’s important to never compromise your form. Having bad form – like allowing your lower back to sag or popping your butt into the air – can increase your risk for injuries and make the plank less effective.

“If your form is compromised you risk injury because you are placing stress on tendons, bones, joints, and muscles that are potentially not in alignment, which can cause you to get hurt,” Michaels says. “Good form is critical with any and every exercise in order to get the most out of it.”

While planks are always a whole-body exercise, certain types of planks can give specific muscle groups an added workout. Modified planks can also make the exercise harder, giving you an additional challenge once you’ve mastered regular planks.

“Depending on how you modify or progress your plank exercise, you can make it extremely difficult or far more manageable,” Michaels says.

Here are a few different plank positions to try, whether you’re a beginner or expert. 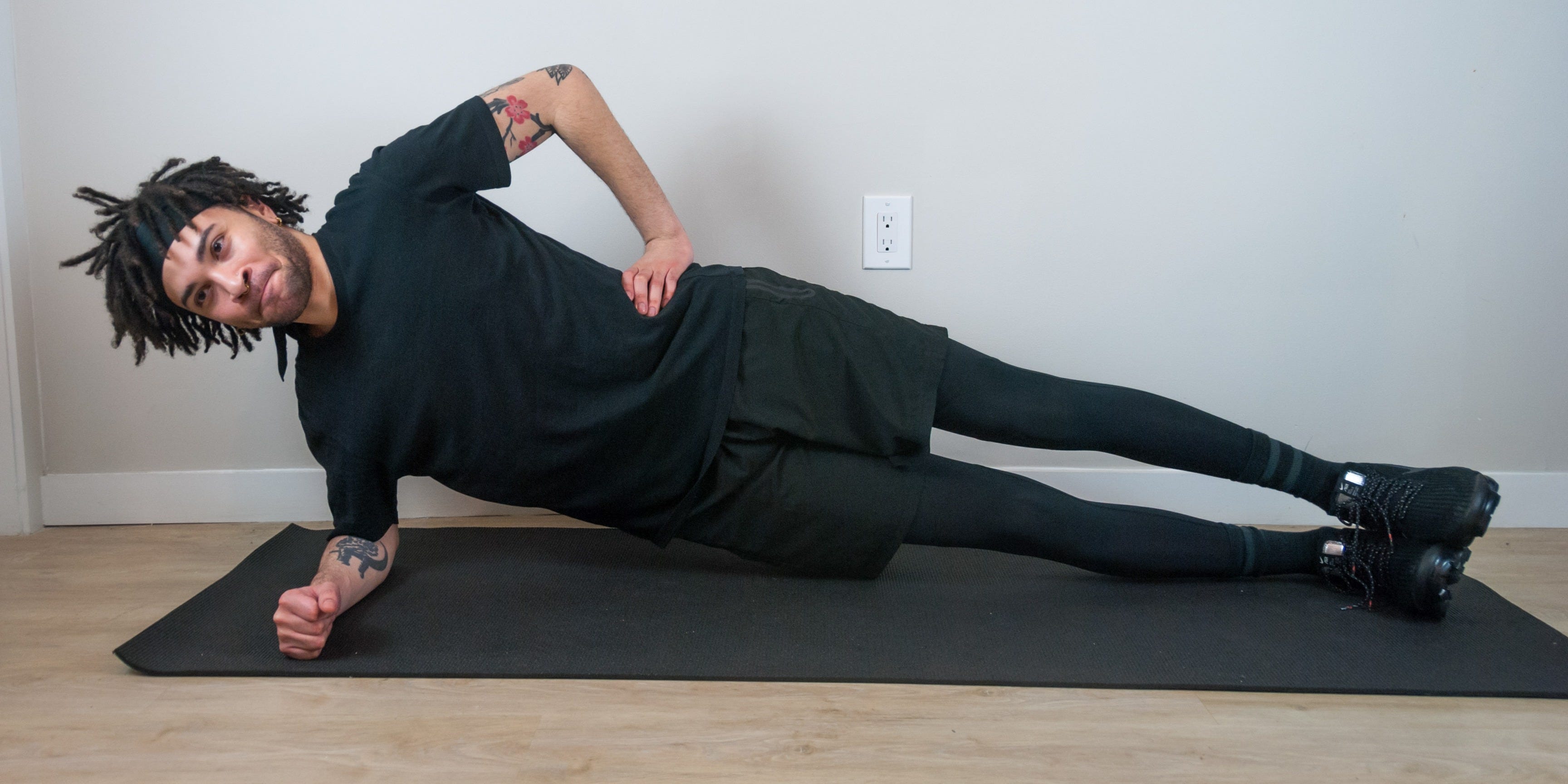 Julian Howard for InsiderWhen doing a side plank, you can put your arm on your hip, or extend it up to the ceiling.

Maintaining the same tenants of a traditional plank, rotate onto your side, extending one arm toward the ceiling and balancing on one foot.

“Side planks are amazing for obliques and intercostals,” Michaels says. These are the muscles between your ribs. 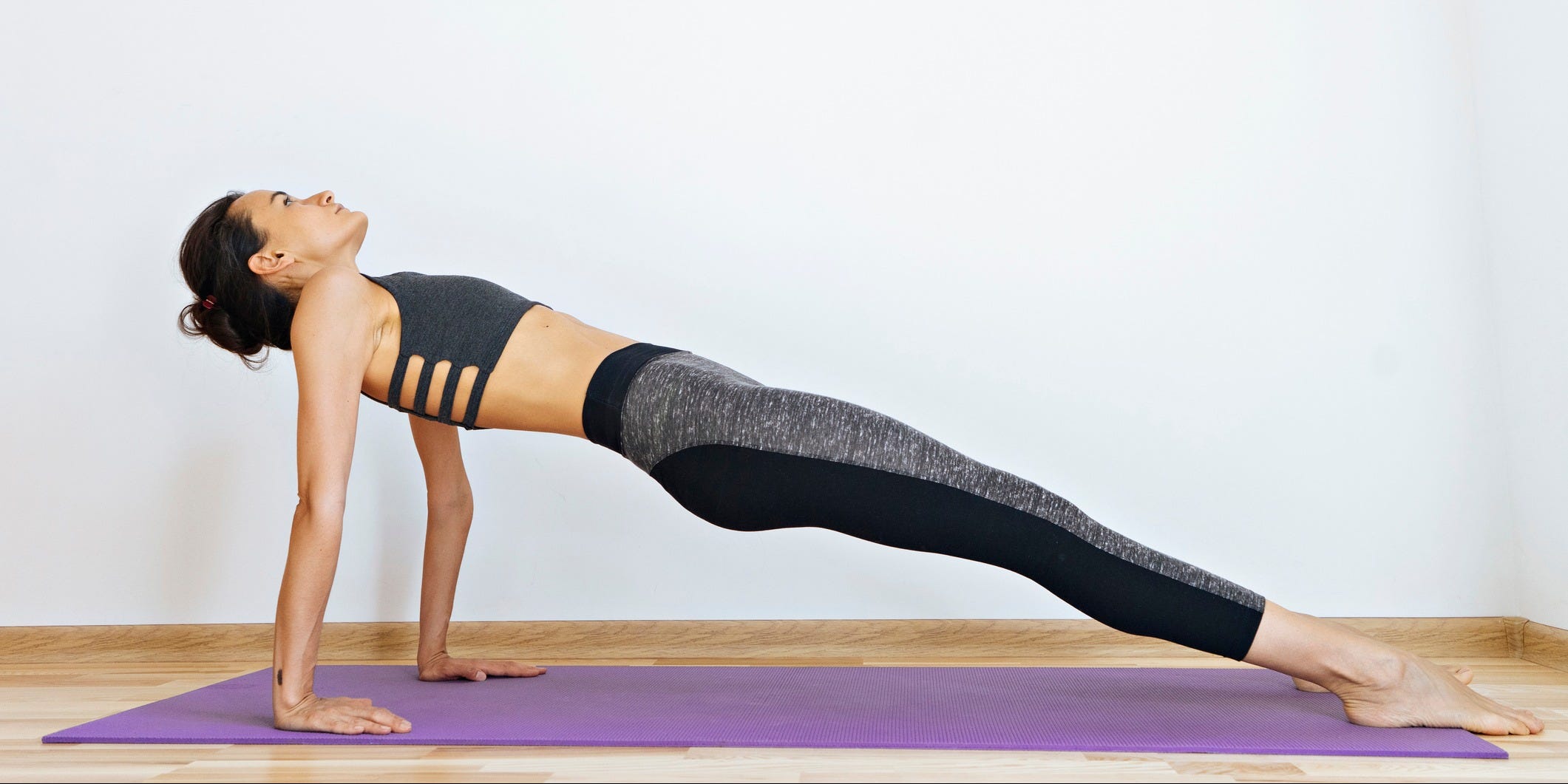 This is the same idea as a standard plank, but you’re facing the ceiling rather than the floor. Lay on your back, and push your upper body up with your arms extended beneath you, until your body is forming a straight line. Hold this position.

“Reverse planks are incredible for your entire core, glutes, hamstrings, and back,” Michaels says.

No matter your fitness level, planks are a good exercise to incorporate into your fitness routine. You can challenge yourself to do planks daily – and even integrate them into the beginning of your stretching and cooldown routine so you don’t forget about them.