I visited these 7 places in Japan both virtually and in real life. Here's how the virtual tours compare to the real thing. 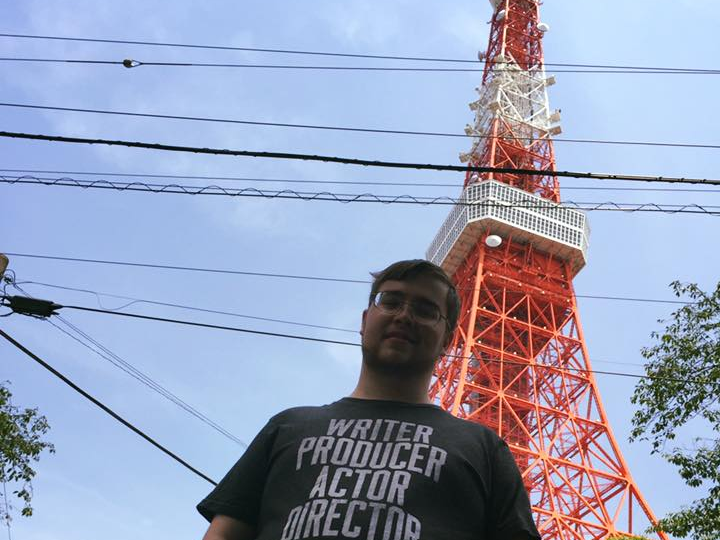 With the coronavirus pandemic keeping many of us stuck in our homes, virtual tours are one of the only ways for us to combat wanderlust. I decided to give some a try, while also taking a walk down memory lane. In 2016, I was one of nine collegiate journalists to visit Japan for two weeks as part of the Roy W. Howard National Collegiate Reporting Competition. It was my first time out of the country, and first time experiencing another culture.

To do these tours, I used a combination of virtual destinations on Japan rail travel company JR Pass‘ website and others I found on Google Earth.

How did these memories compare with revisiting these Japanese landmarks virtually? It was a little like opening a yearbook. I was hit with a wave of nostalgia that reminded me why Japan is one of my favourite countries in the world.

Here’s how the virtual tours compared to the real deal. 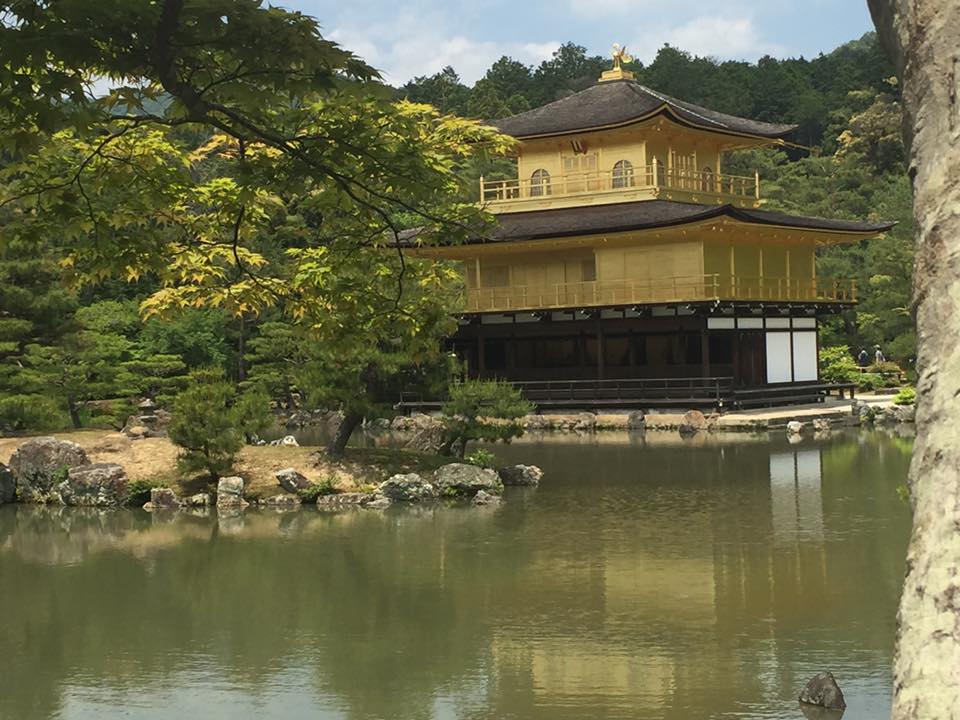 The Golden Pavilion was the first real Japanese landmark I saw on my trip. To get there, we had to take both a train and a bus, and then walk from the front of the park all the way to where the temple is located.

… but virtually, it took only a few clicks of the mouse to stand before it. 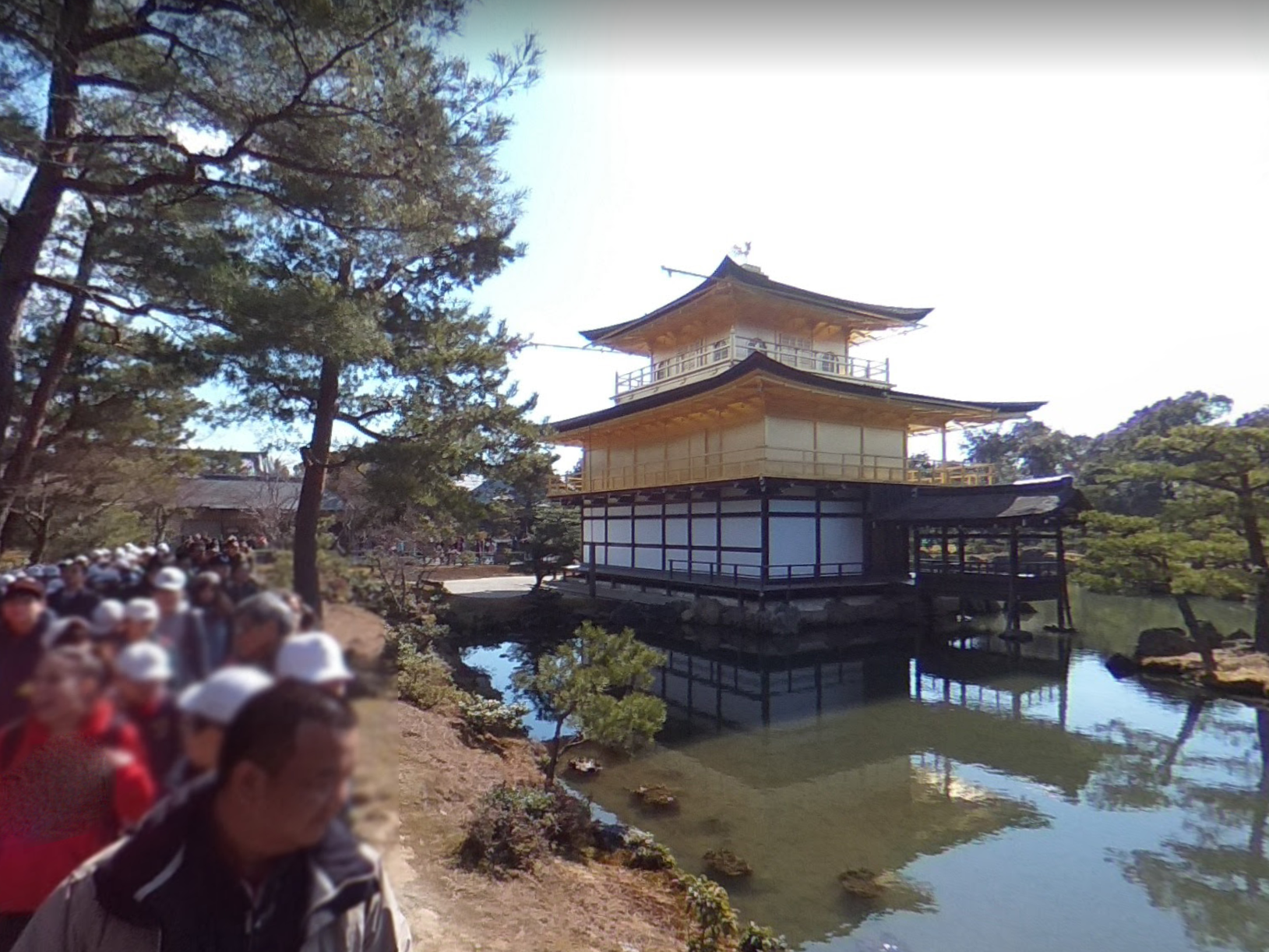 It feels like I’m among the crowd of people gathered to visit the golden shrine. Only one of the pathways is available, and moving the mouse, I feel like a ghost sliding above the heads of the crowd.

The virtual tour does a good job of capturing the temple’s grandeur, but it is a short experience. 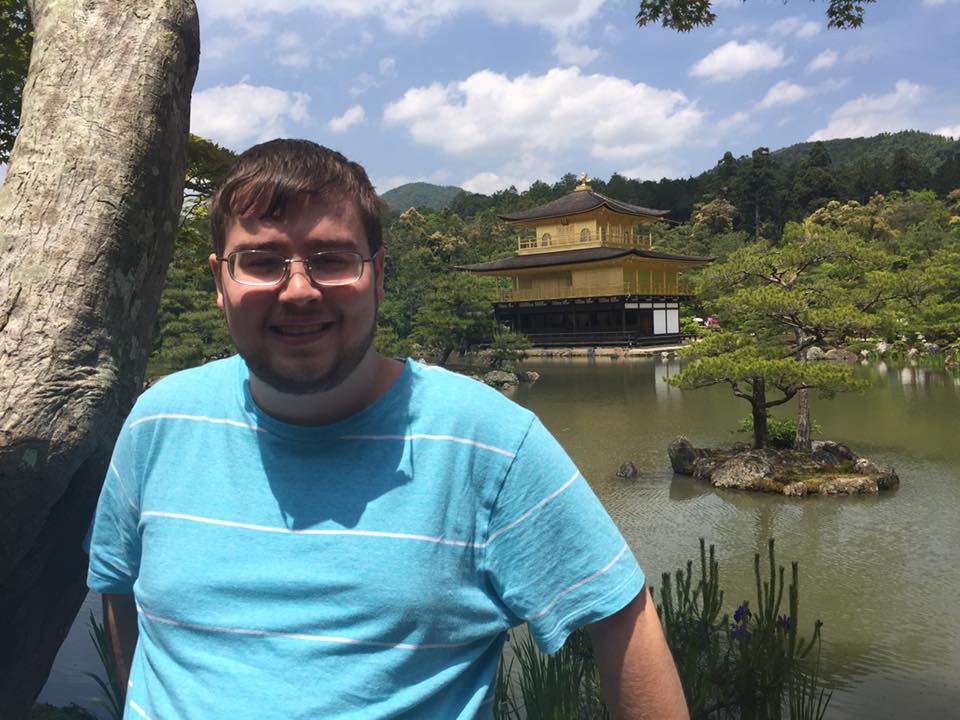 What’s striking about the virtual tour is that it captures the temple exactly like it exists in my memories. I just wish it captured the entire experience instead of just a slice of it. I want to stroll down the different paths and see the temple from all sides.

Seeing the temple virtually after visiting it in real life is also a strange experience. There’s something unnatural about it. Part of me expects to feel the summer heat against my skin, the crunch of gravel beneath my feet, and the terror of coming across bumblebees flying around the public trash cans – I’m allergic.

The virtual tour of Shibuya Crossing, said to be the busiest intersection in the world, captures Tokyo’s large crowds. 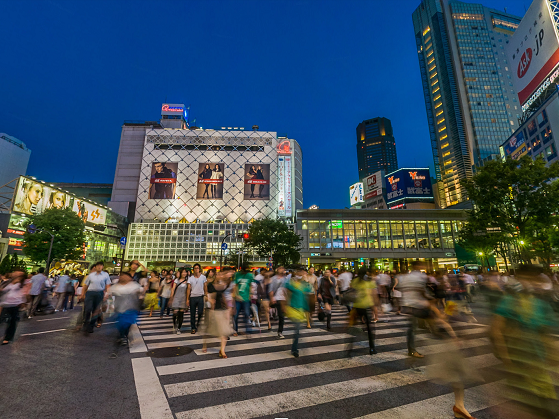 At any one time, approximately 2,500 people are crossing the intersection at Shibuya, making it one of the busiest in the world. In the virtual tour, the crowd are either ghosts or doing their best impersonation of the Flash. They are blurs that surround you, almost replicating the uneasy feeling of a crowd moving quickly around you.

It can’t match the anxiety of making the trip yourself. 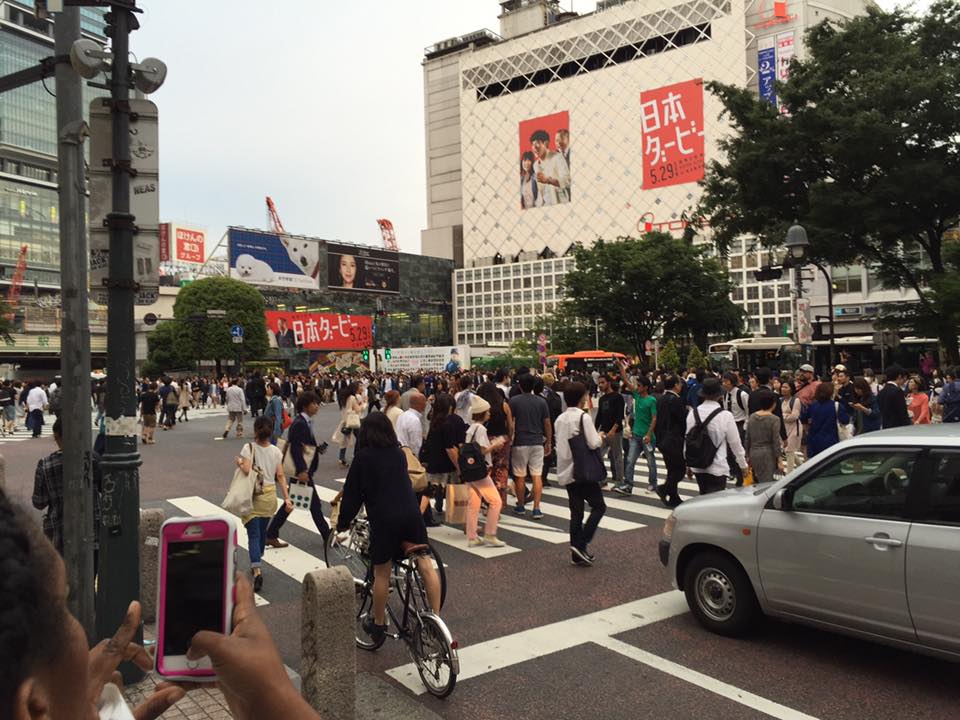 When I visited in 2016, I experienced it firsthand. Everyone gathers on their side of the street, and it makes you feel like you’ve been swallowed by a sea of people.

When I was there, my friends and I chatted idly as we waited. When the walk signal came on, it suddenly became a mad dash for survival. The opposing sides of people collide in the middle of the intersection, and it’s easy to feel lost.

Coming out the other side felt like an accomplishment, like I had survived a terrifying thrill ride.

The virtual tour of the Tokyo Tower is bathed in harsh blue light. 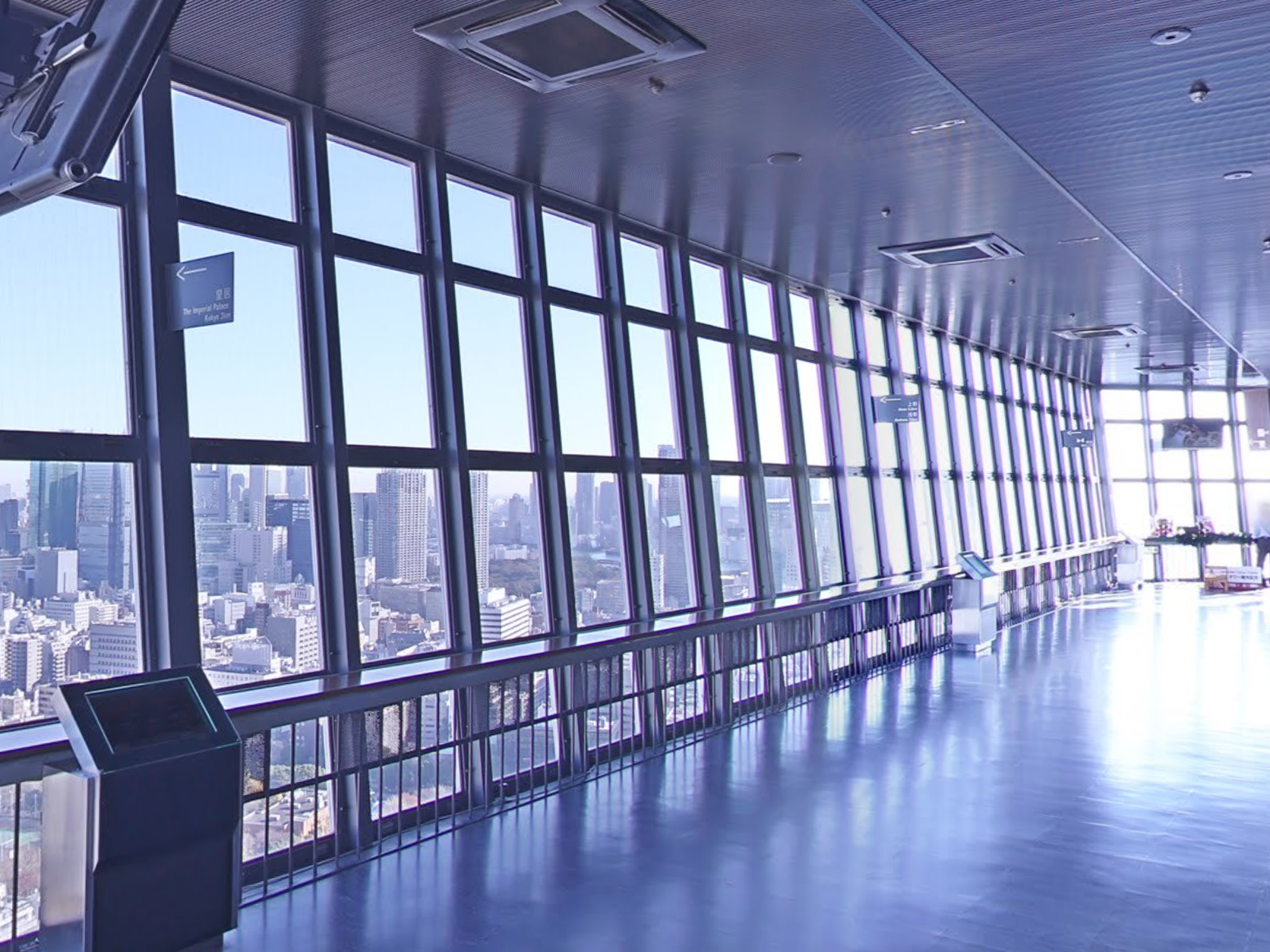 I don’t know if I would recommend this virtual tour. Maybe Tokyo Tower is just one of those places you have to experience in real life – whenever that might be – and anything less isn’t worth the clicks.

The tower’s observation deck has been faithfully captured, down to the gift shop that sells magnets, but the blue hue is harsh to the eyes. The view is also faded, and it feels like I’m looking at a fake background of Tokyo instead of the real thing. There is also a nighttime version of the tour that’s better quality, but the view of the city is obscured by reflections from the interior lights.

In real life, Tokyo Tower offers a breathtaking view of the city. 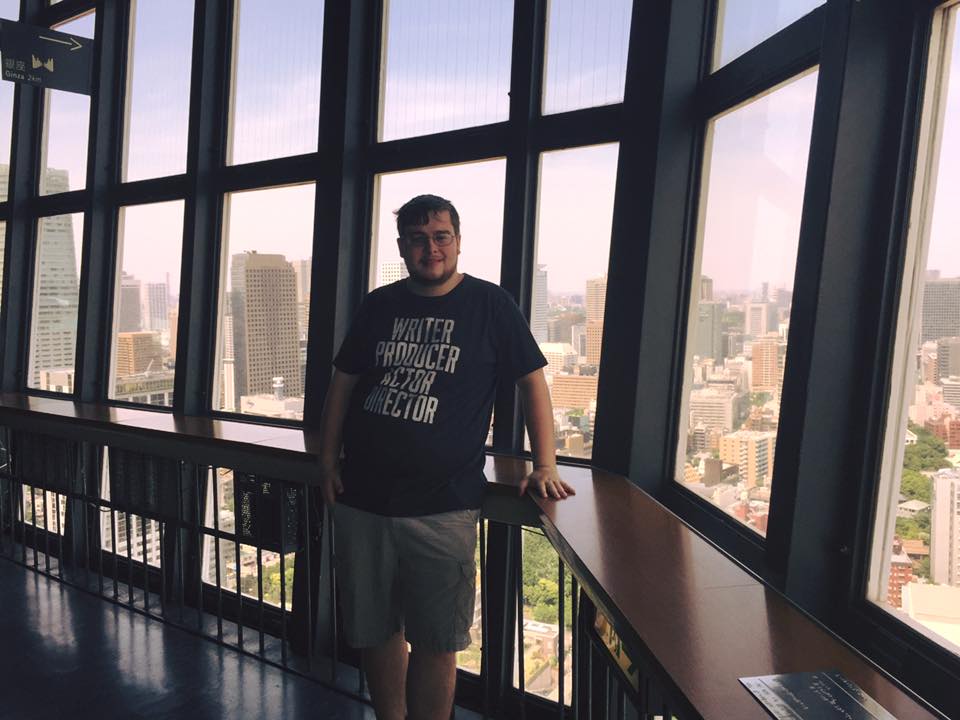 Standing in the observation deck of the tower was the first time I realised just how expansive Tokyo really is. Skyscrapers continued one after another in all directions for as far as I could see, and I felt like a dot in the middle of this living and breathing, yet mechanical, organism.

You can’t see the Tokyo Tower from the ground floor in virtual reality either. 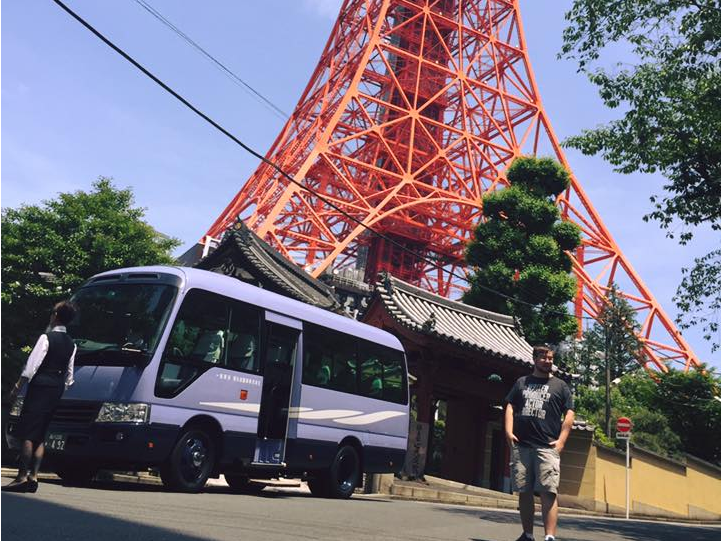 Getting to Tokyo Tower felt like a journey that could only be rivaled by Frodo’s journey in “Lord of the Rings.” We walked at least 30 city blocks to get there, stopping only briefly at a pet store to look at some puppies in the window. Watching the tower in the distance slowly get closer and closer is an experience I will never forget.

You can also visit the Hiroshima Peace Memorial Park virtually. 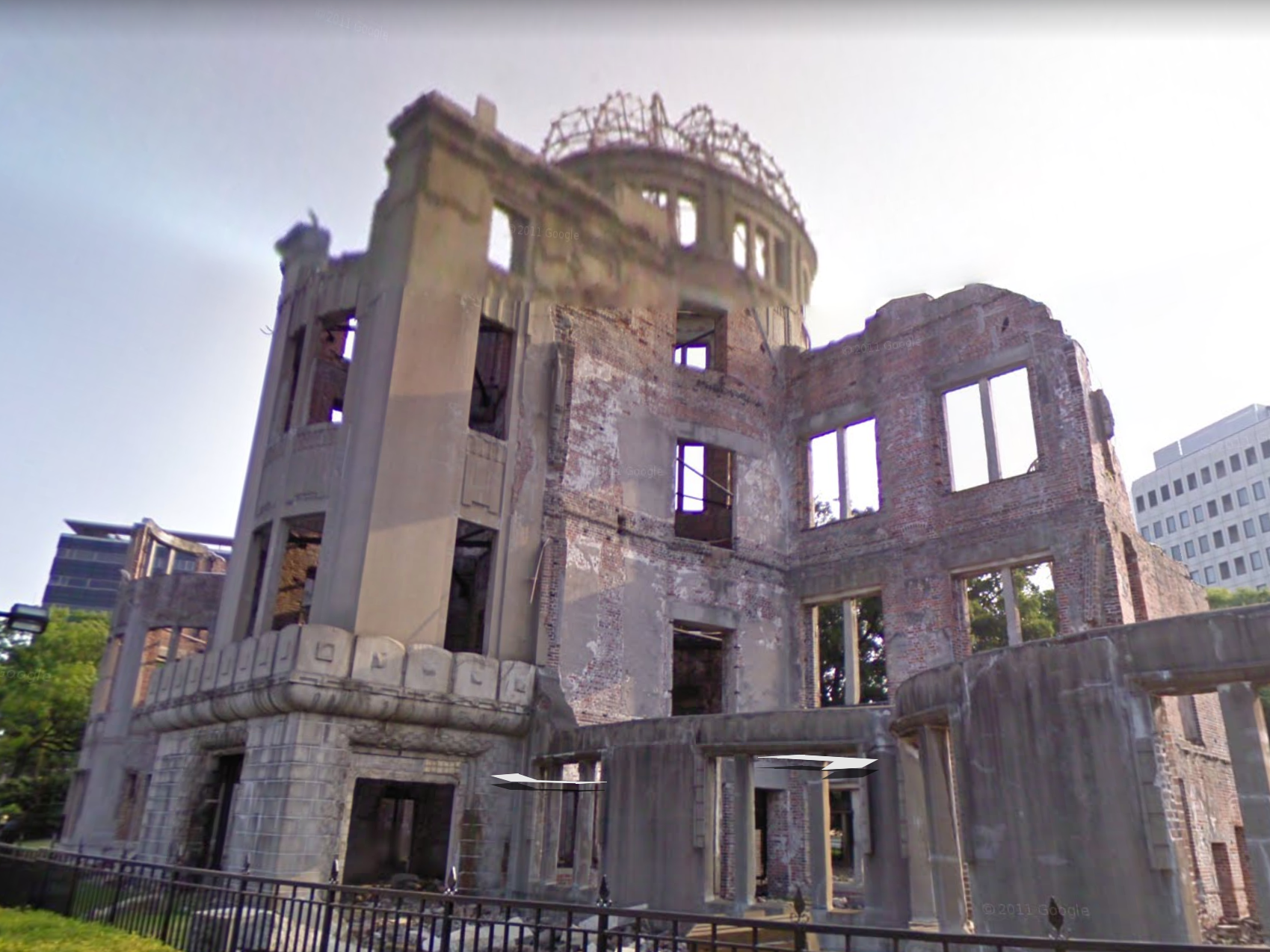 Even in a virtual tour, the Atomic Bomb Dome remains as haunting as it ever was. When the United States dropped the atomic bomb on Hiroshima, this building was the only structure left standing near the bomb’s hypocenter. Today, it’s a memorial to the bombing and all those who lost their lives.

The dome is located in a beautiful park that’s home to a museum about the effects of the bombing, but that wasn’t available in the virtual tour I experienced.

Actually visiting Hiroshima as an American is a much more conflicting experience. 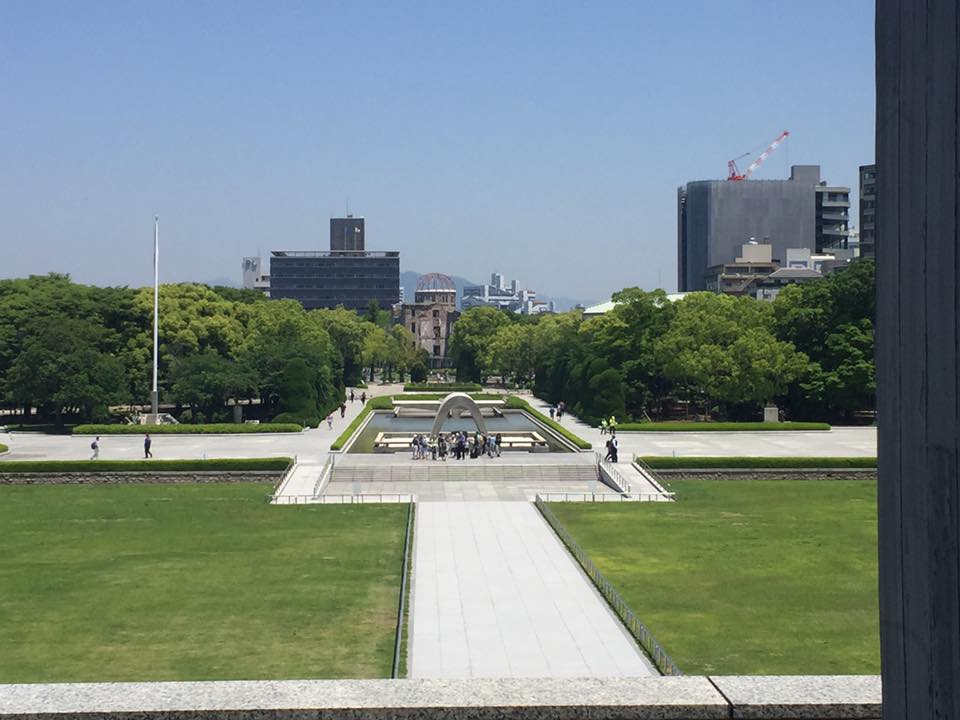 Growing up, I was taught that Americans are the good guys. In school, everyone learns about the dropping of the atomic bombs and how it killed 135,000 people, but visiting Hiroshima turned the the facts and figures into reality. I could see firsthand the effects it still has on Japan and the people who live there.

Inside the museum, I saw walls with just the shadows of people remaining after the bomb dropped and read stories of little children who were diagnosed with cancer due to the radiation. I didn’t know how to feel other than sad – sad for the people of Hiroshima, sad for the people of Pearl Harbour, and sad about the war in general. 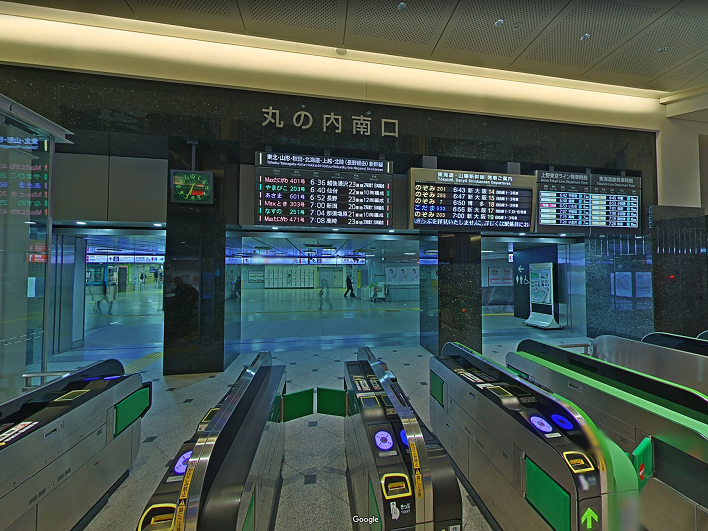 Subways stations are stressful places, especially when you’re in another country and can’t read the signs. Visiting Tokyo Station virtually allowed me to appreciate the architecture of the buildings. Strolling down the empty hallways, I have no place to be and no trains to board.

This is closer to what it looked like when I was there. 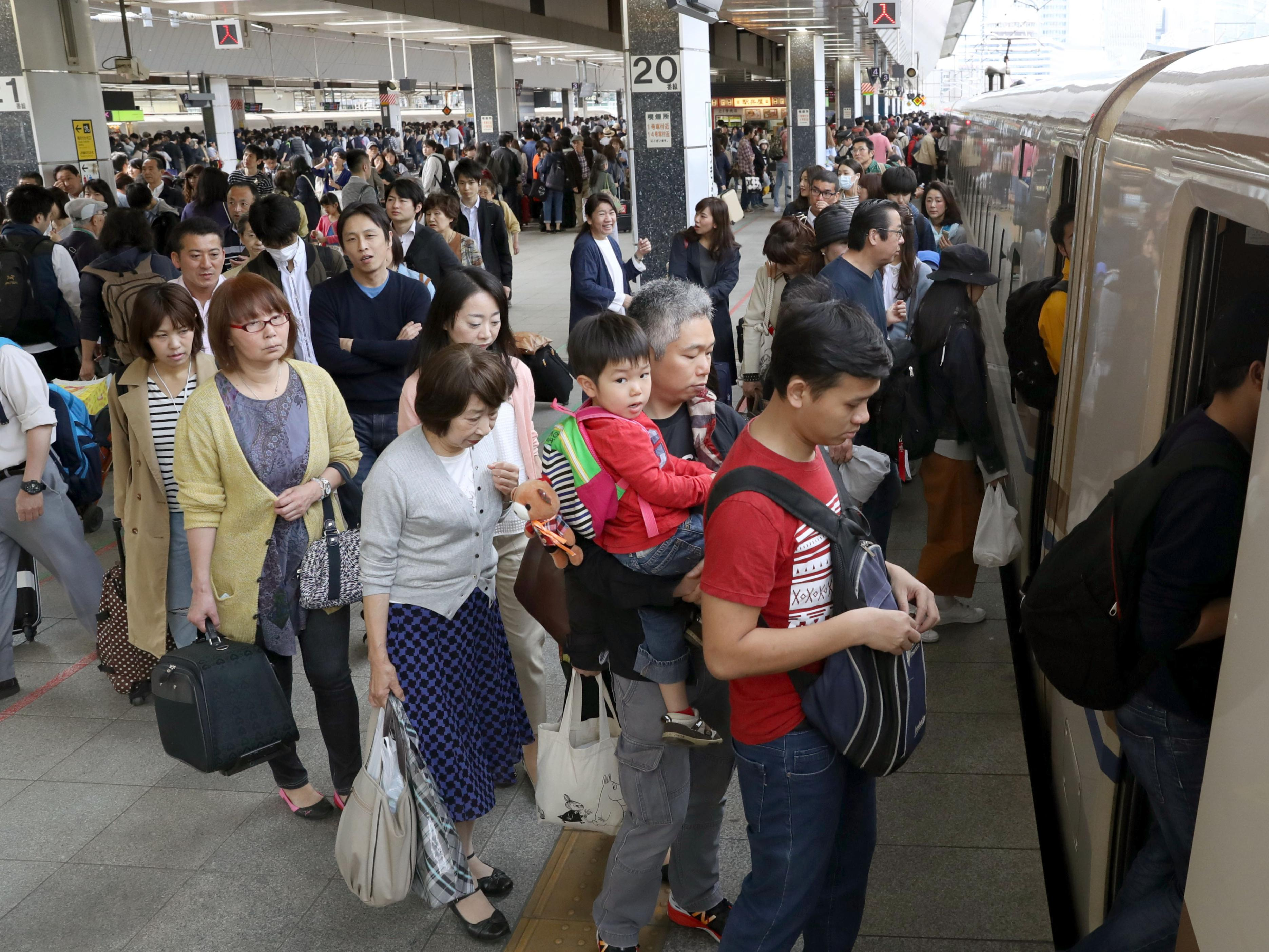 My memories of attempting to navigate the Tokyo subway system are of sheer panic. The walkways were always jammed packed, and I had to push my way onto subway cars with less than elbow room.

Yet a virtual tour of the Ryōan-ji Rock Garden in Kyoto fails to capture what makes it special. 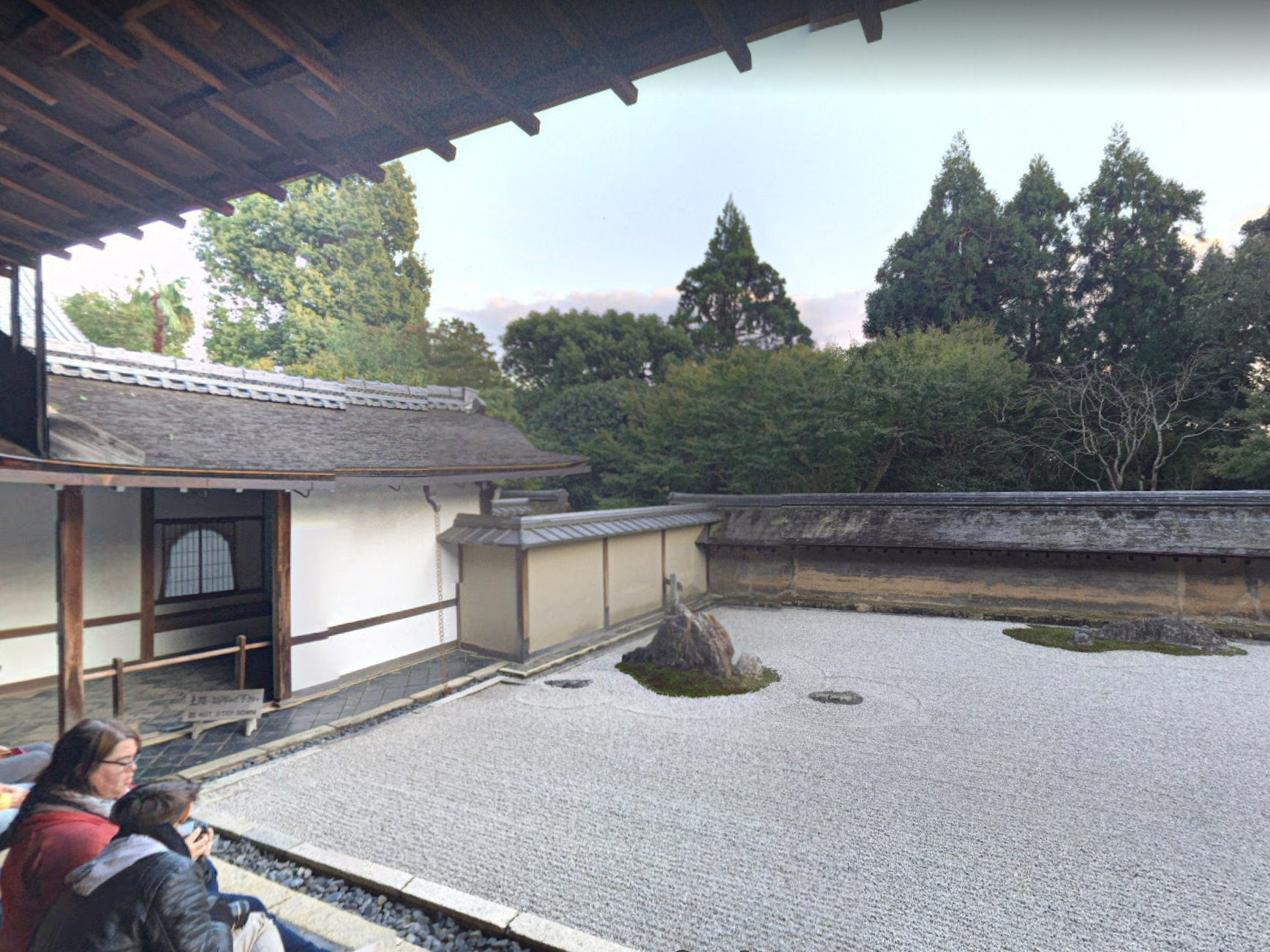 Unlike the other virtual tours, you cannot actually move around. Instead you’re on a swivel, positioned high above the crowd of visitors.

It’s nothing like actually being there and experiencing its calming nature in person. 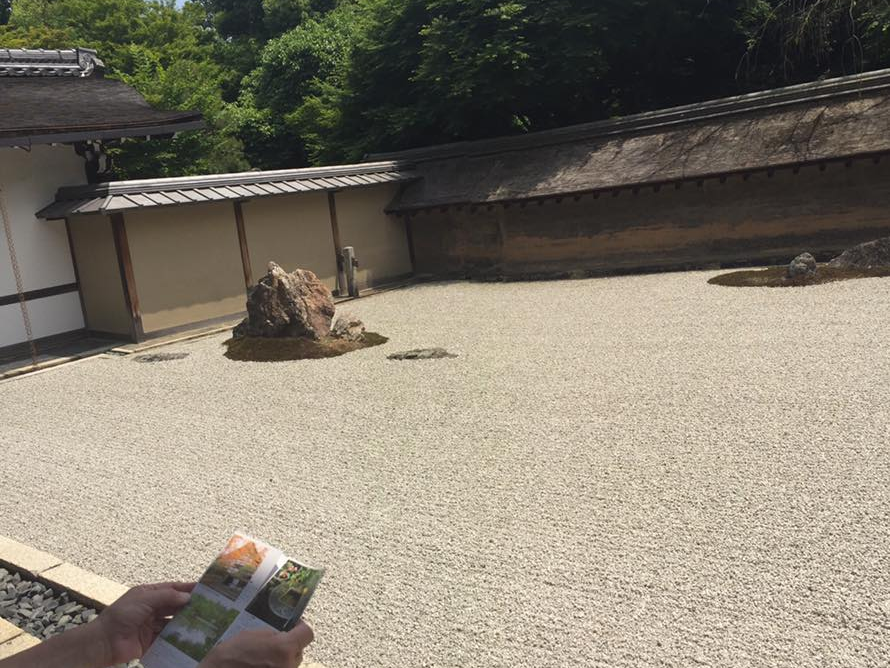 The reason the Zen Gardens are popular is because of their peaceful nature, which is hard to capture through a computer screen. You can’t sit on the bench, watching the rocks, with just the sound of the wind blowing through the trees around you.

During my trip, I saw Mount Fuji for a passing glimpse from a bullet train … 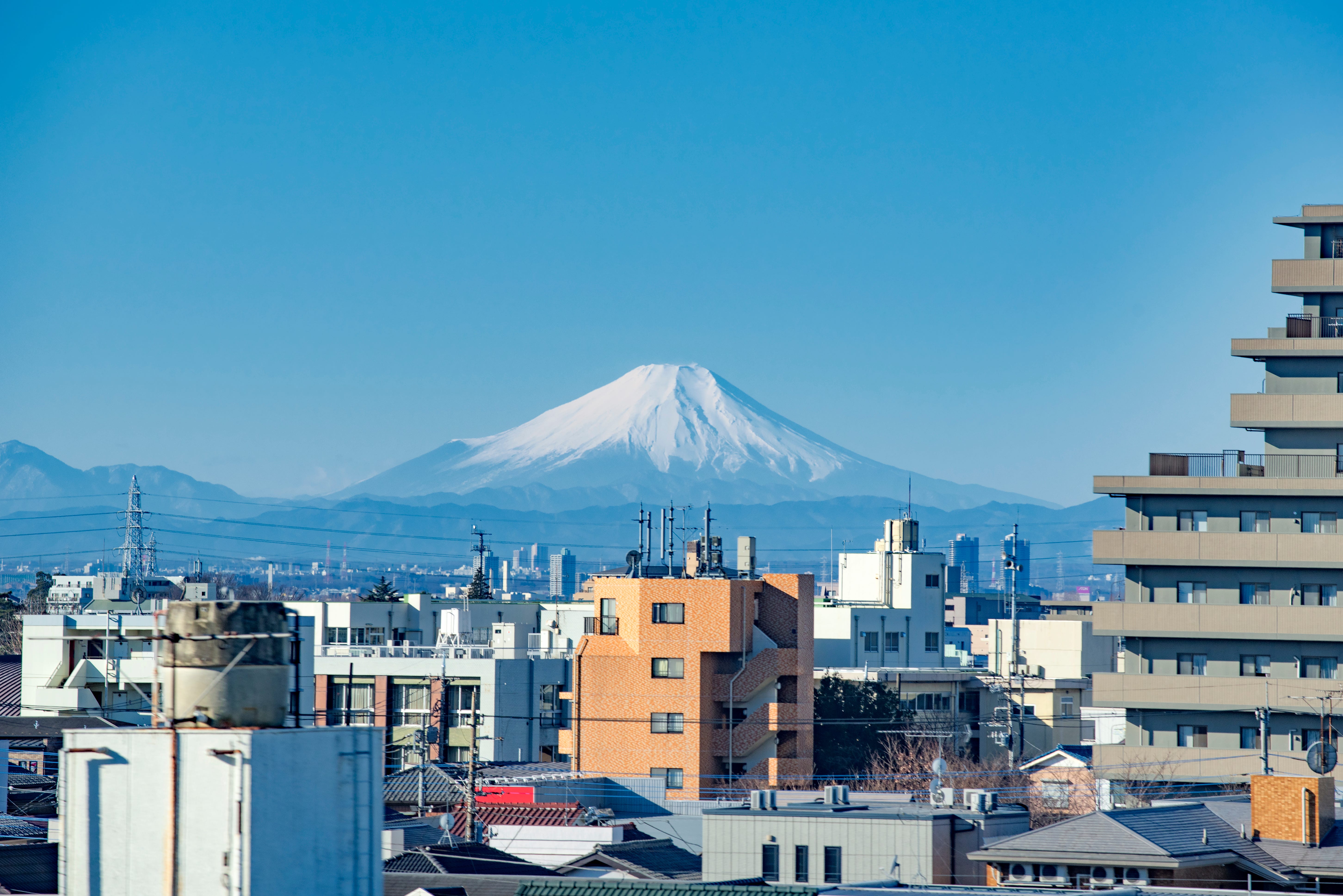 We were on a bullet train on our way from Osaka to Tokyo, speeding across Japan at speeds that still feel hard to imagine. Mount Fuji appeared on the horizon, a massive rock that towered over everything around it.

It was so far away, yet so close at the same time. I swore to myself that one day I would return for a closer look.

… but virtually I can spend a lunch break at its peak. 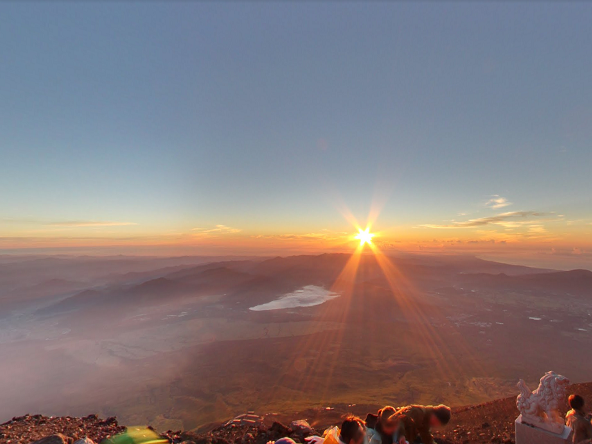 Along with a crowd of people who actually made the climb, I can sit and enjoy the view from the mountain’s peak. I didn’t even work up a sweat – and people say mountain climbing is hard. Maybe I’ll try Mount Everest before dinner.

But in all seriousness, seeing what the world looks like from the mountain’s peak makes me want to climb it for real. I want to experience the journey there, the hike up, and the mountain air.

Virtually, I can even re-experience my trip on the bullet train. 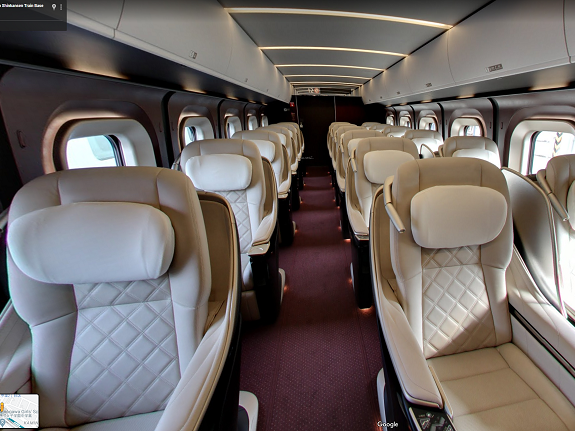 In the virtual tour, I can walk through the cabins of the empty train. The train online looks slightly better than the one I took. It’s too bad I can’t sit in one of the train seats for a nap – they look comfortable.

There are also virtual trips in Japan I never had the opportunity to experience in real life. 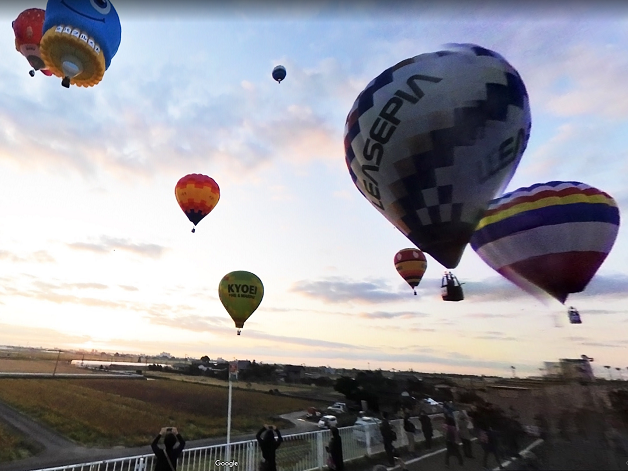 I didn’t see the hot air balloons rise up during the Saga Balloon Festival or the cherry blossoms transform the Japanese landscape into a pink wonderland.

There’s so much to do in Japan that I was only able to see a fraction of the country during my trip. I can only hope that one day I’ll return to do all the things I didn’t the first time.

But they’re not a match for experiencing the real thing with friends. 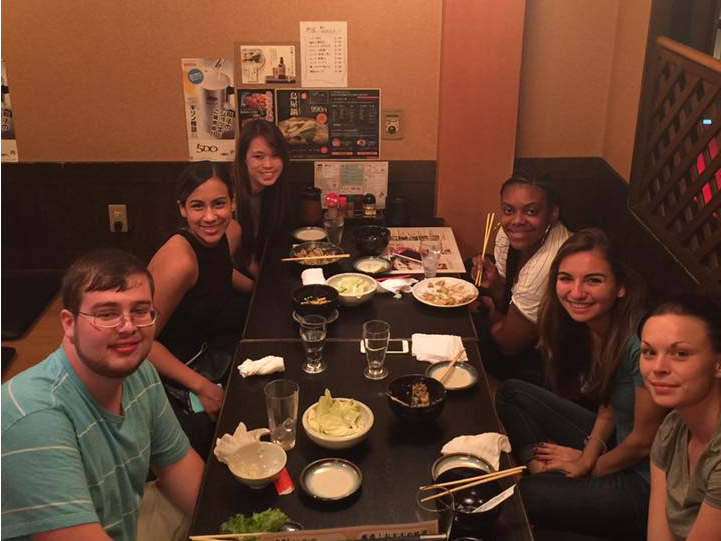 I’m filled with a strange sort of sadness while doing these virtual tours. No matter how much I search, I won’t find the friends I made in Japan in these virtual recreations. I haven’t talked to some of them in such a long time, but I can still imagine us all there. I can see us walking through the streets of Osaka and Tokyo in amazement, thinking, “We did it, we’re actually in Japan.”

There are moments you experience that you can never get back. You can only relive them again for a little while, whether it’s through photos, videos, or virtual tours like these.