Trends come and go with the seasons, and keeping up with them means something different every year.

One of the best ways to gauge what was fashionable during a certain time period is to take note of what people were actually wearing on the streets during their day-to-day lives.

From corsets to miniskirts, here are 19 vintage photos that show what street style has looked like throughout the years.

In the 1910s, streetwear for men could be considered quite formal by today’s standards. 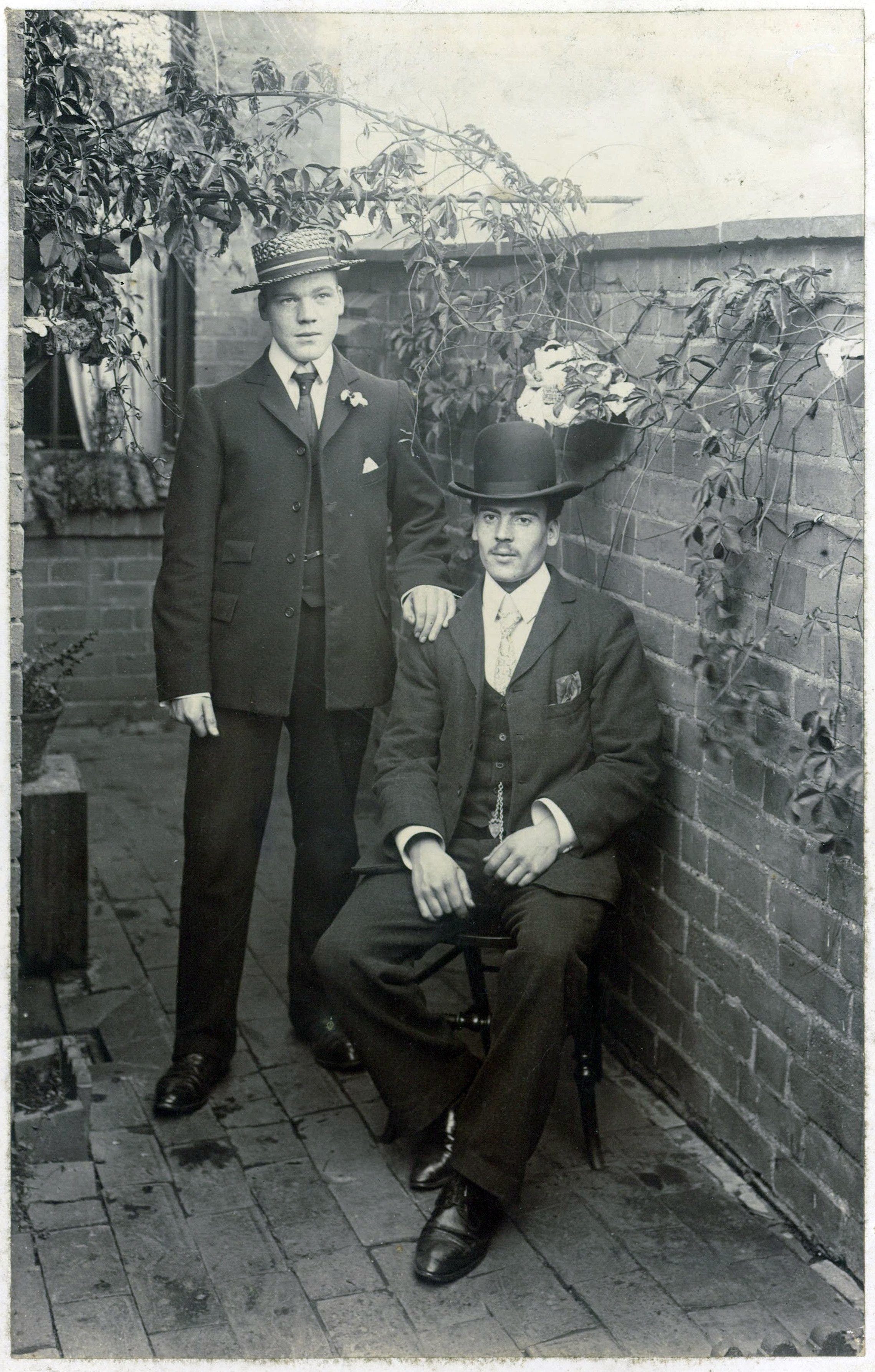 Dark, three-piece suits with hats or caps were a standard outfit for men in the 1910s.

In the 1920s, loose-fitting dresses were rising in popularity. 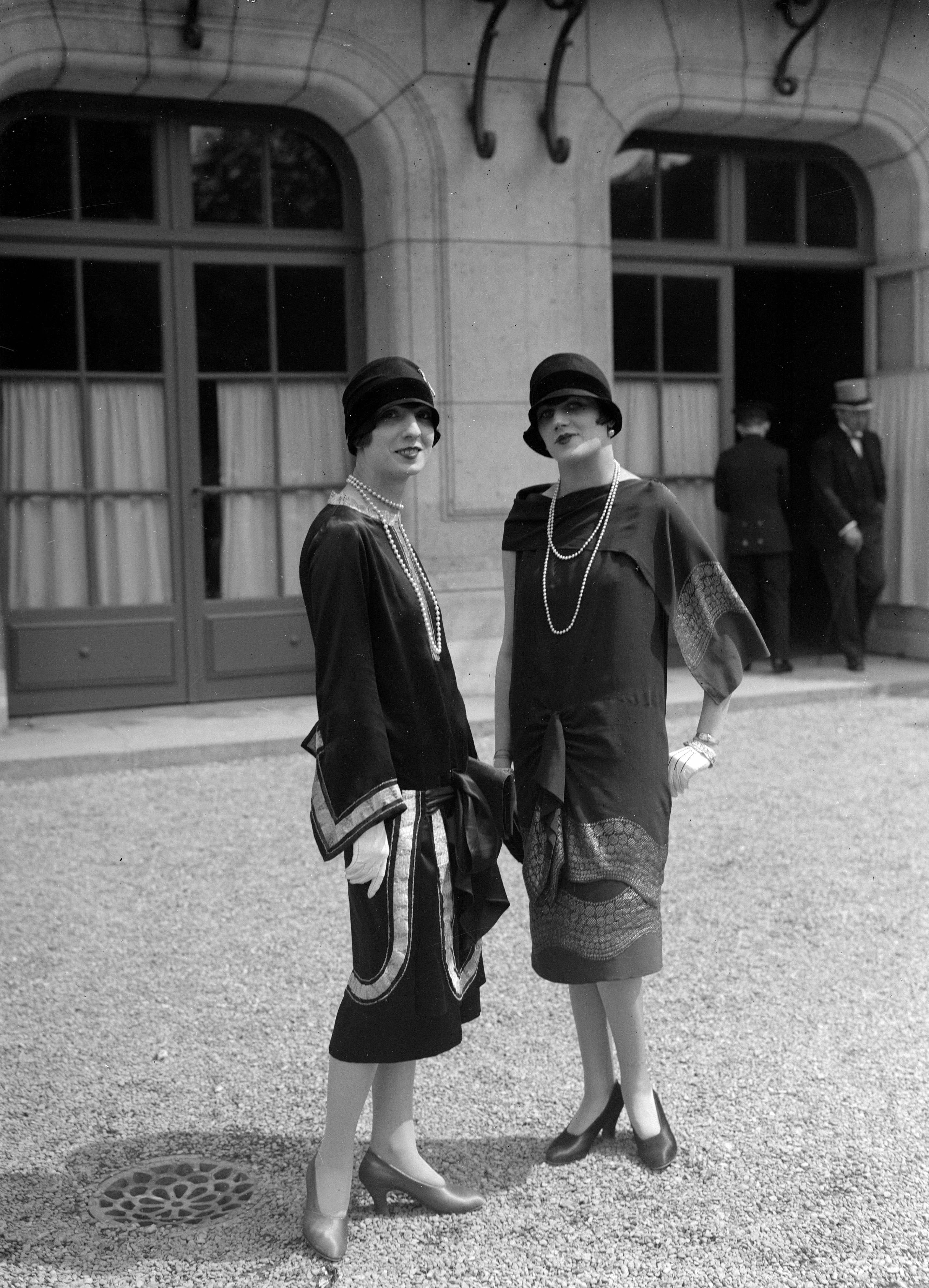 Branger/Roger Viollet/GettyLow heels and flowy dresses were trendy in the 1920s.

By 1922, women’s fashion had largely ditched the cinched waists and corsets of the early 1900s.

In the 1920s, women typically paired these flowy dresses with low-heeled pumps or T-strap shoes. To complete their look, they sometimes wore their hair in short, curled styles.

Tailored dresses were popular in the 1930s. 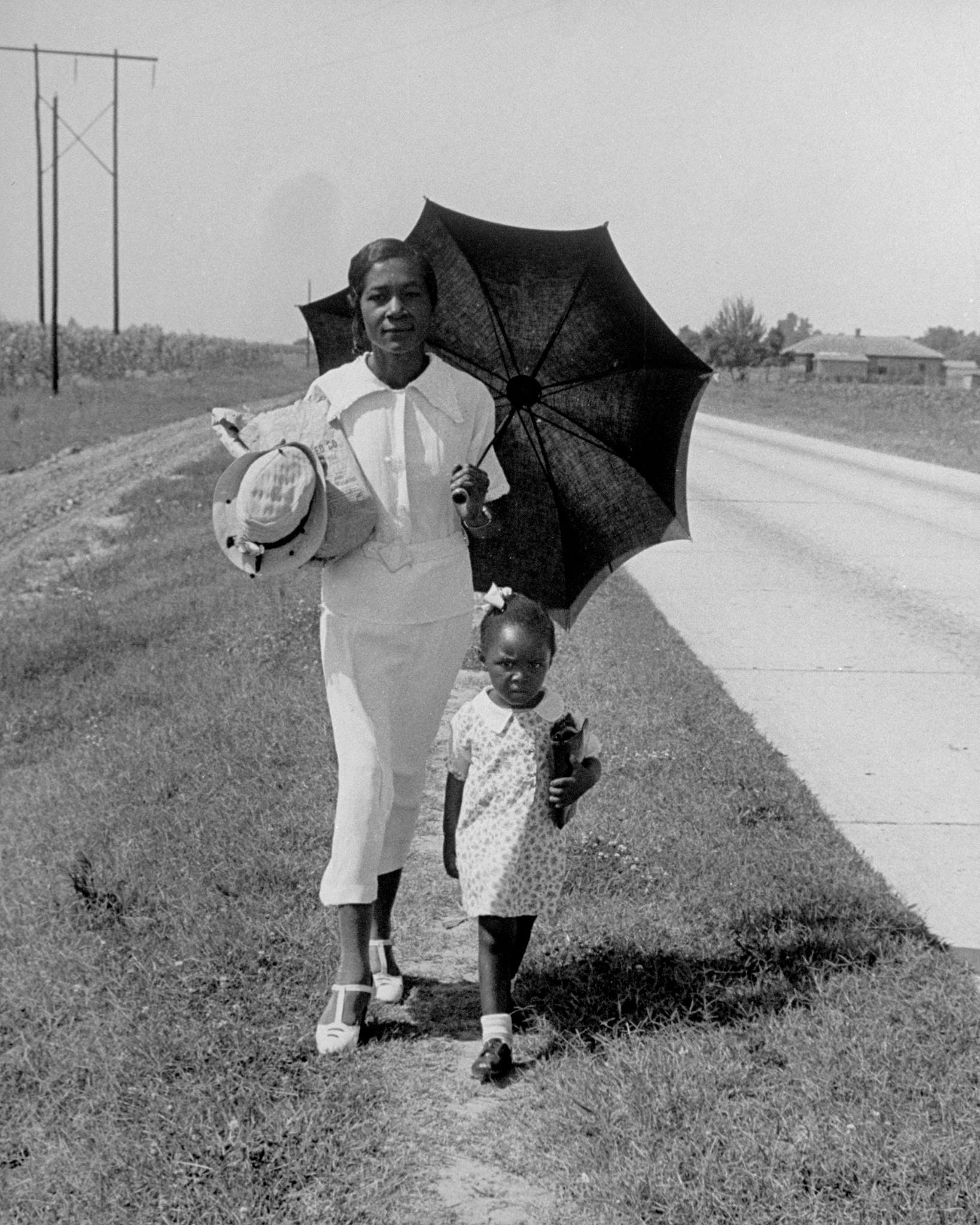 In the 1930s, simple and feminine silhouettes were quite popular.

During this decade, many women wore dresses that had belted waists, large collars, and hemlines down to one’s calves or ankles. These dresses were typically made using fabrics in simple colours or subtle prints.

Some women’s street fashions in the early 1940s were quite structured. 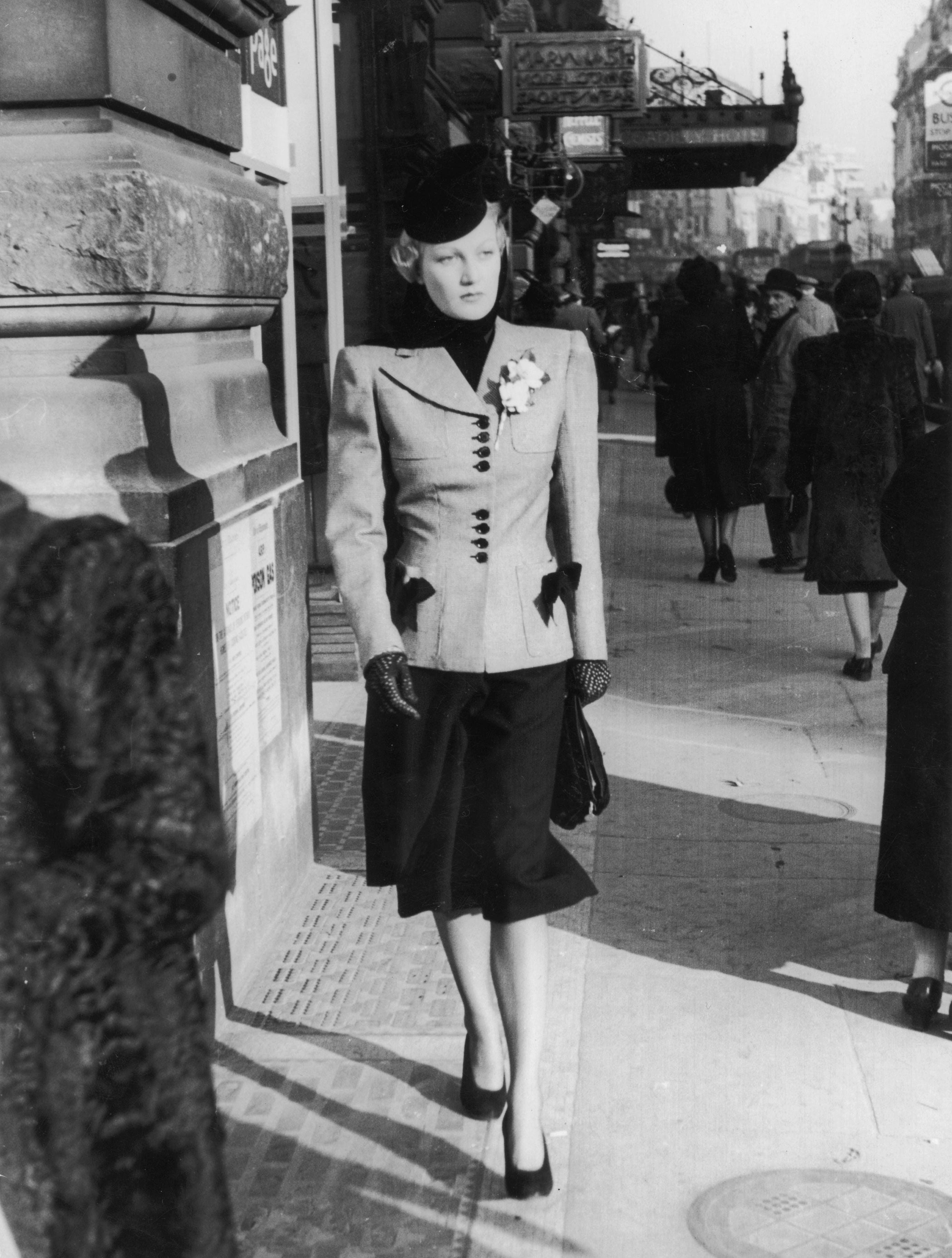 Some pieces of women’s clothing in the 1940s featured squared shoulders, minimal pleating, and skirts that ended at or just above the knee.

Two-piece suits (sometimes called utility or victory suits) that were practical and simple also became quite popular during this time.

Pants became more popular for women to wear in the 1940s, too. 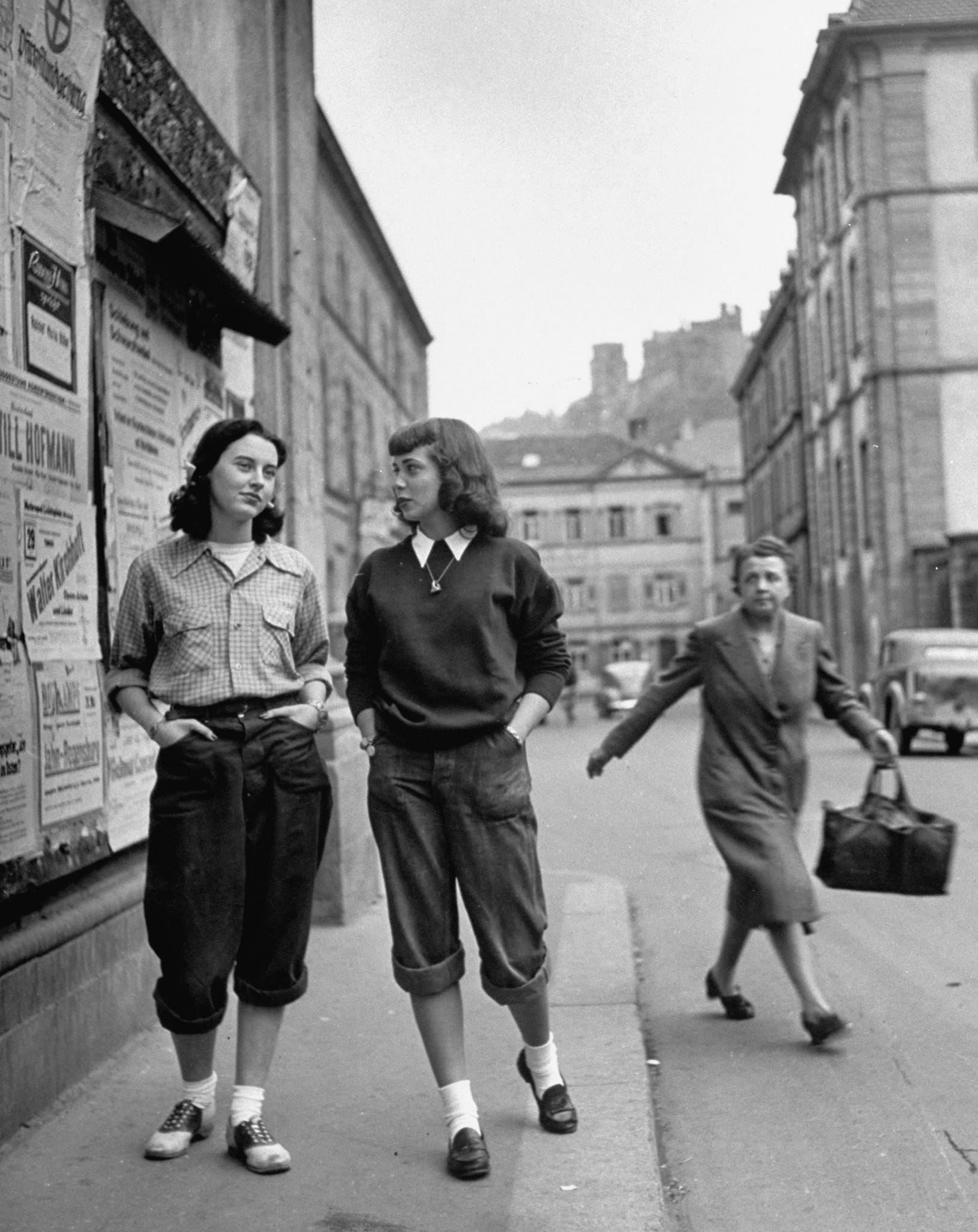 In the 1940s, it became a bit more popular for women to wear pants. Although they were oftentimes loosely fitted, the pants were typically worn cinched and belted at the waist.

Oxford-style shoes were also quite trendy at the time and they can be seen worn by the woman in the photo on the left.

Long coats were also popular for women to wear in the 1940s. In the 1940s, many styles of women’s coats were designed to be loose-fitting with a cinched waist that was meant to emphasise or create the illusion of an hourglass silhouette.

During this decade, trench coats and long overcoats were quite popular.

In the late 1940s, women’s street style featured A-line dresses and an emphasis on creating the appearance of an hourglass-shaped silhouette. In the late 1940s, after World War II had ended, new trends began to replace the harsher wartime styles.

For some women, this new look consisted of A-line dresses with padded skirts and cinched waists. Some individuals wore their dresses with belts so they could create or emphasises an hourglass silhouette

Throughout the 1940s, peep-toe heels were also rising in popularity and the woman in the photograph on the right can be seen wearing a pair of them.

Some men in the 1940s could be seen wearing zoot suits. 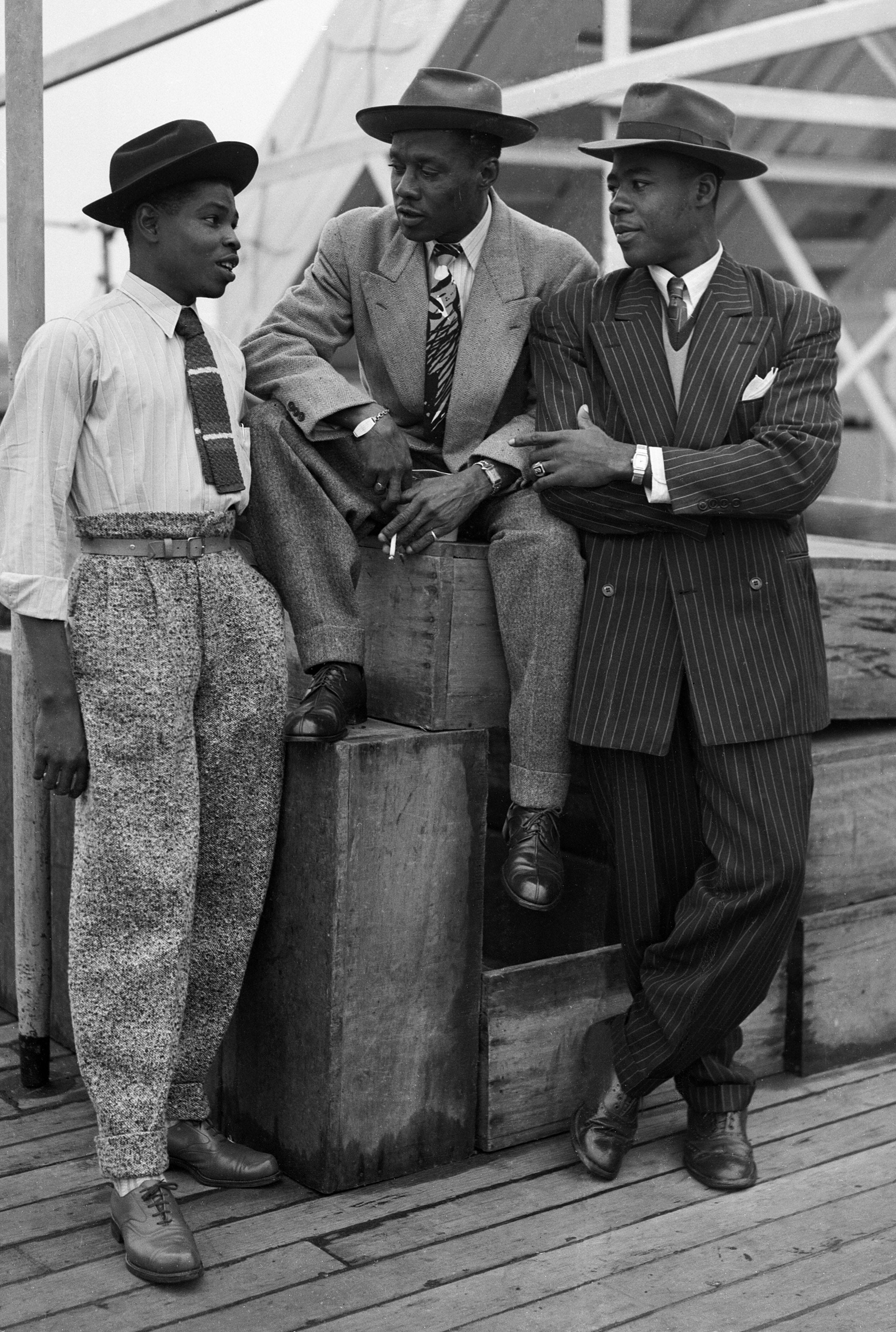 Some say the zoot suit was created when people began to uniquely tailor regular suits that were two sizes too large for the individuals wearing them. Other origin stories suggest that the suits were made from scratch and purposefully designed to be loose-fitting.

The zoot suit is known for being composed of loose, high-waisted pants that taper down into fitted cuffs and a jacket that has large lapels and shoulder pads.

In addition to being worn by activists, like Malcom X and Cesar Chavez, and jazz musicians, like Cab Calloway and Dizzy Gillespie, this suit was also popularly worn by young Mexican-American and African-American men in the 1940s.

In the early 1940s, during World War II, fabric in the US was being rationed, so the oversized zoot suits were viewed by some as an “unpatriotic waste of resources” because of how much extra fabric they typically contained.

Some popular styles for women in the 1950s included full skirts and floral patterns. 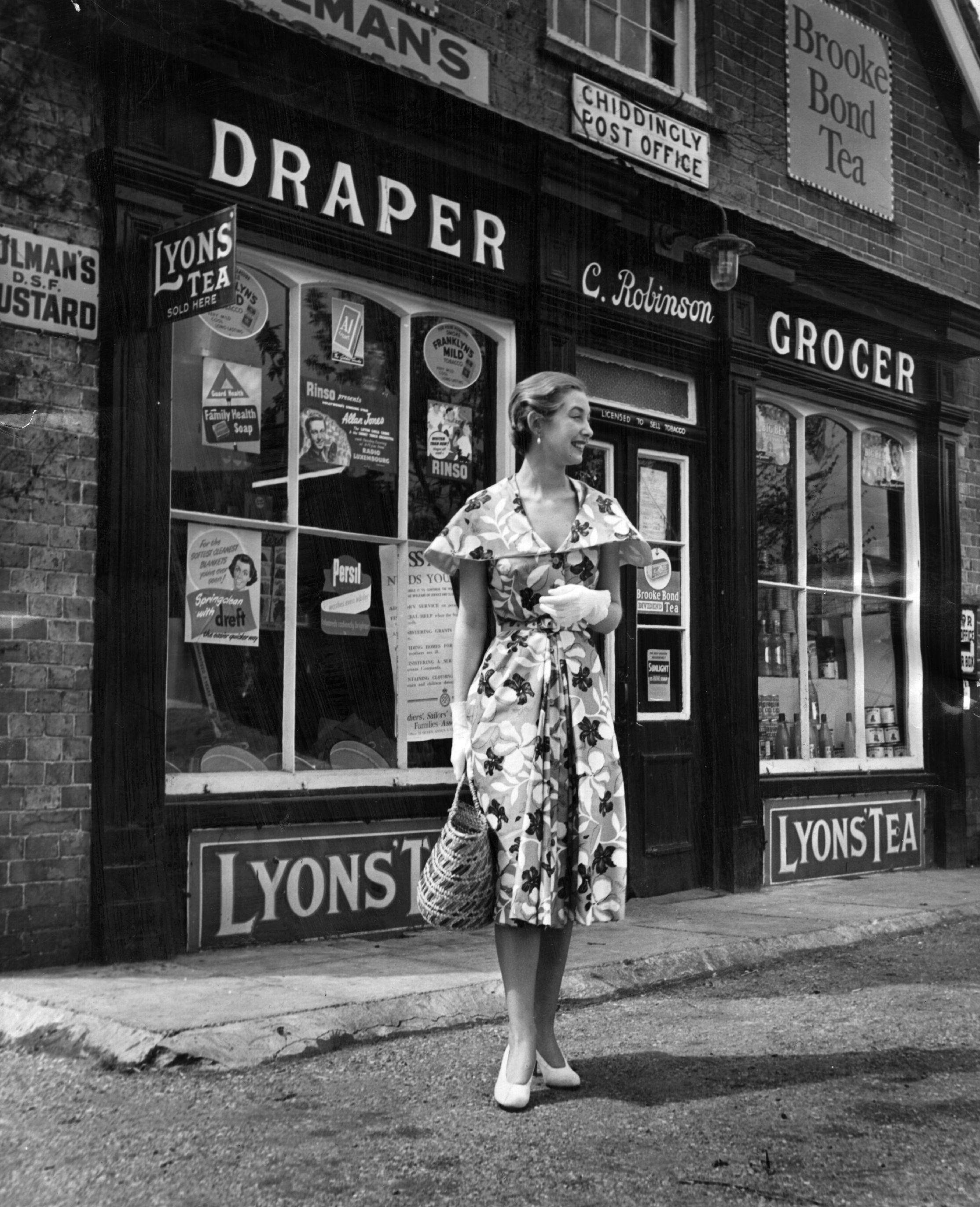 Lee Miller/Picture Post/GettyA woman wearing a dress with a detachable cape in the 1950s.

In the 1950s, dresses were sometimes paired with capes, bits of fabric designed to cover one’s shoulders. The woman in the photograph is wearing a removable cape that’s been crafted from the same fabric as her dress.

Generally, dresses that had a cinched waist and full skirt were a popular trend during this decade. Like many dress silhouettes in the past, this one was also meant to create the appearance of or emphasise an hourglass body shape.

Floral-print fabrics were also trendy at the time, whether they were being worn or being displayed as part of one’s home decor.

And, in the 1950s, women sometimes paired their outfits with gloves to both warm their hands and add a touch of elegance to their look.

In the 1950s, pencil skirts and neatly styled hair were also popular trends. 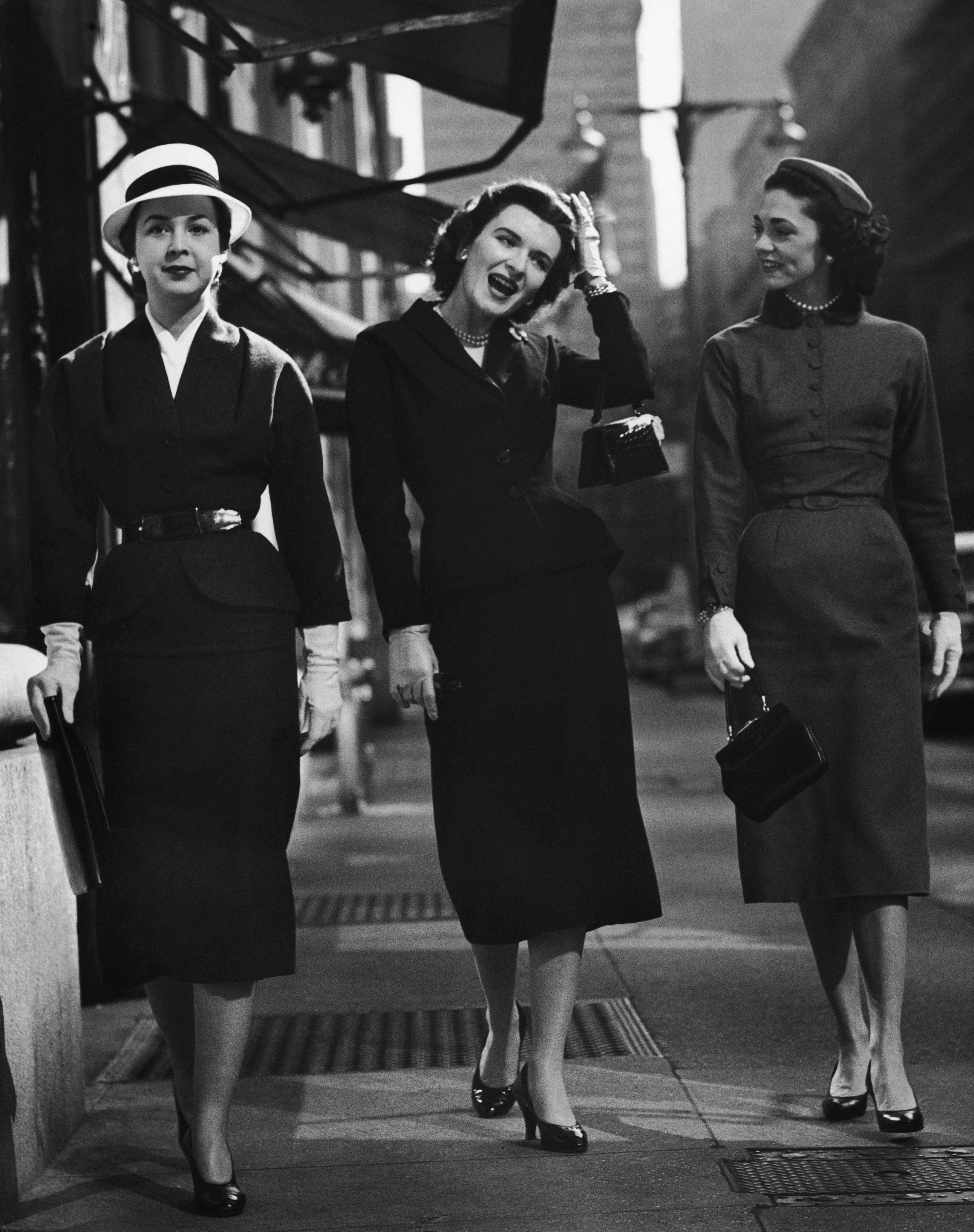 Nearly the opposite of a full skirt, pencil skirts were also popular in the 1950s.

This style of skirt is known for being tight and difficult to walk in because it is designed to be closely fitted to one’s figure. Many of the pencil skirts at this time were shin-length.

Women in the 1950s also occasionally accessorized with a pill-box style hat (a flat hat with no brim) or a wide-brimmed hat.Short, neatly styled hair and pearl necklaces were also becoming popular trends during this decade.

In the 1960s, some women wore miniskirts. Mario De Biasi/Mondadori Portfolio/GettyA group of women outside of a boutique in the 1960s.

With the arrival of the 1960s, dresses and skirts with shorter hemlines became quite popular.

During this time, women also began wearing pants that had a slimmer fit and came in more vibrant colours and patterns.

In the 1960s, music icon Cher wore her hair long, free-flowing, and straight and many women grew out their hair and straightened it in order to achieve a similar look. Voluminous hairstyles, like the beehive and bouffant, were also popular at this time.

White boots were quite trendy in the 1960s. 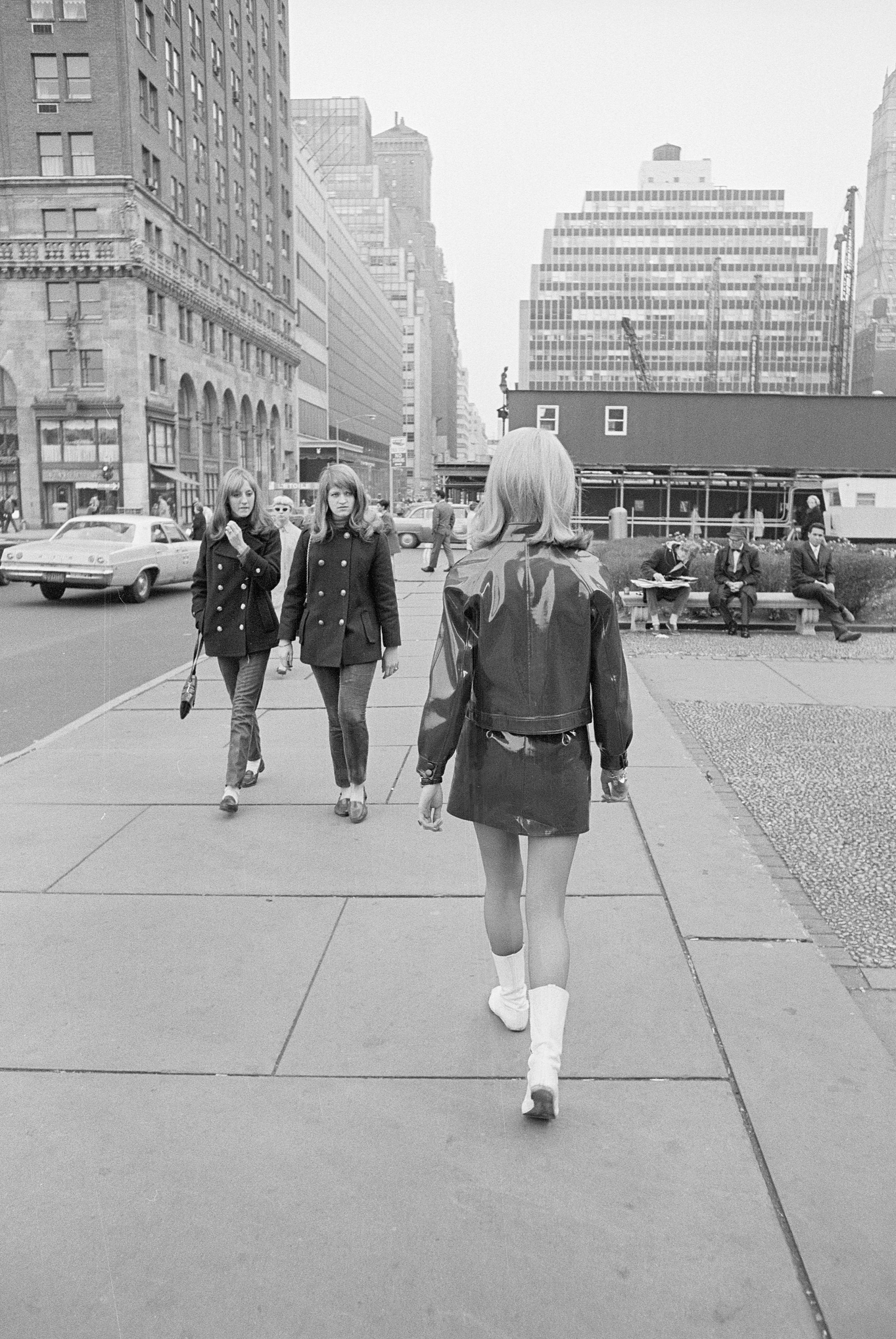 Bettmann / Contributor/GettyWomen walking in the streets of New York in the 1960s.

Boots that went up to one’s ankle or one’s calf were quite popular during this decade and they were sold in classic colours, like brown and black, and more vibrant colours, like red and green.

In the 1960s, the skirt suit was also a popular choice. 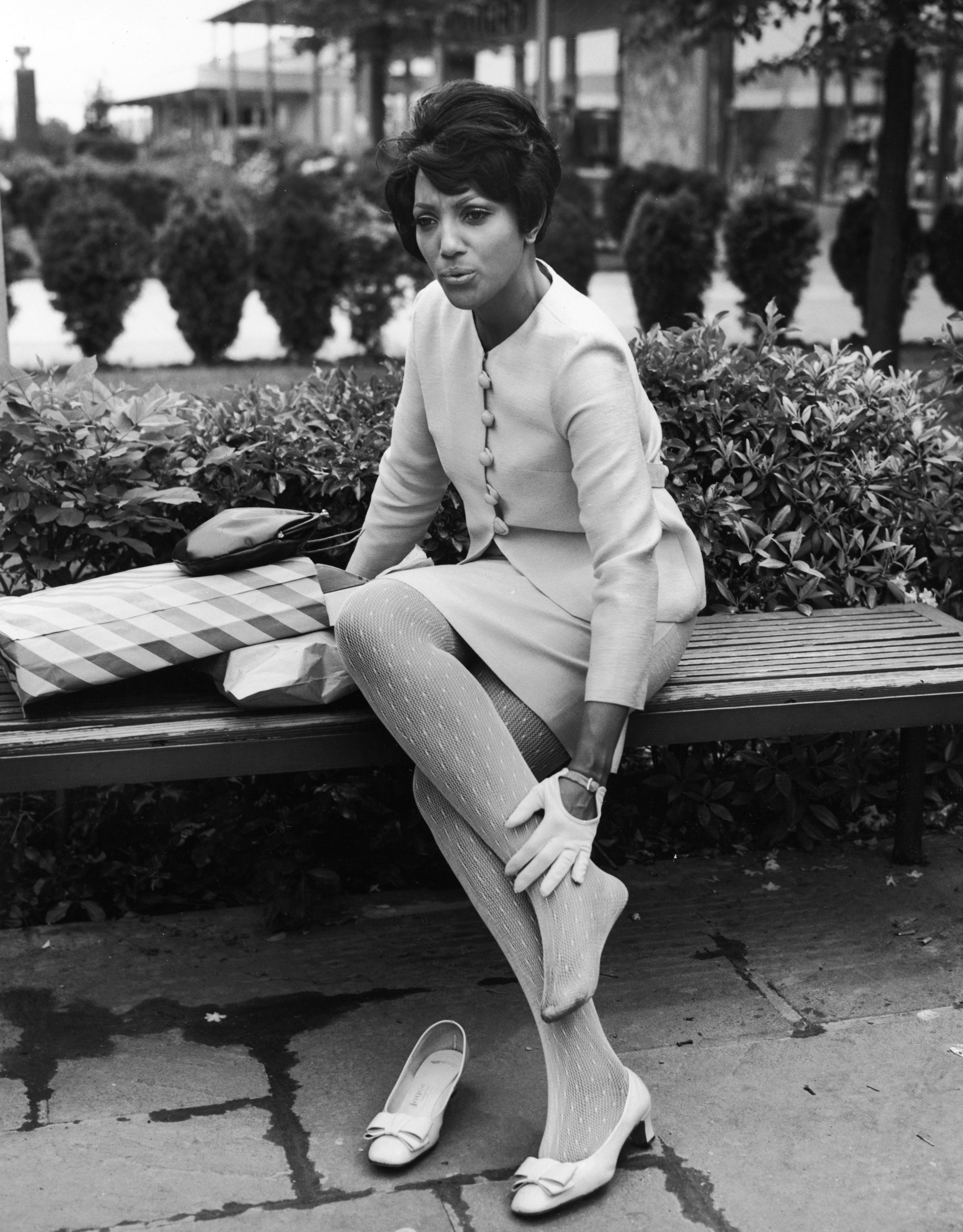 Lambert/GettyA woman sitting on a bench in 1965.

Former first lady Jackie Kennedy was a major style icon in the 1960s and she was well-known for wearing skirt suits, a buttoned-up blazer that’s been paired with a matching skirt. Many other women at the time also took part in this elegant trend – these suits were commonly worn in vibrant or pastel colours.

Easy to pair with a skirt suit, coloured or patterned tights were also a popular accessory during this decade. 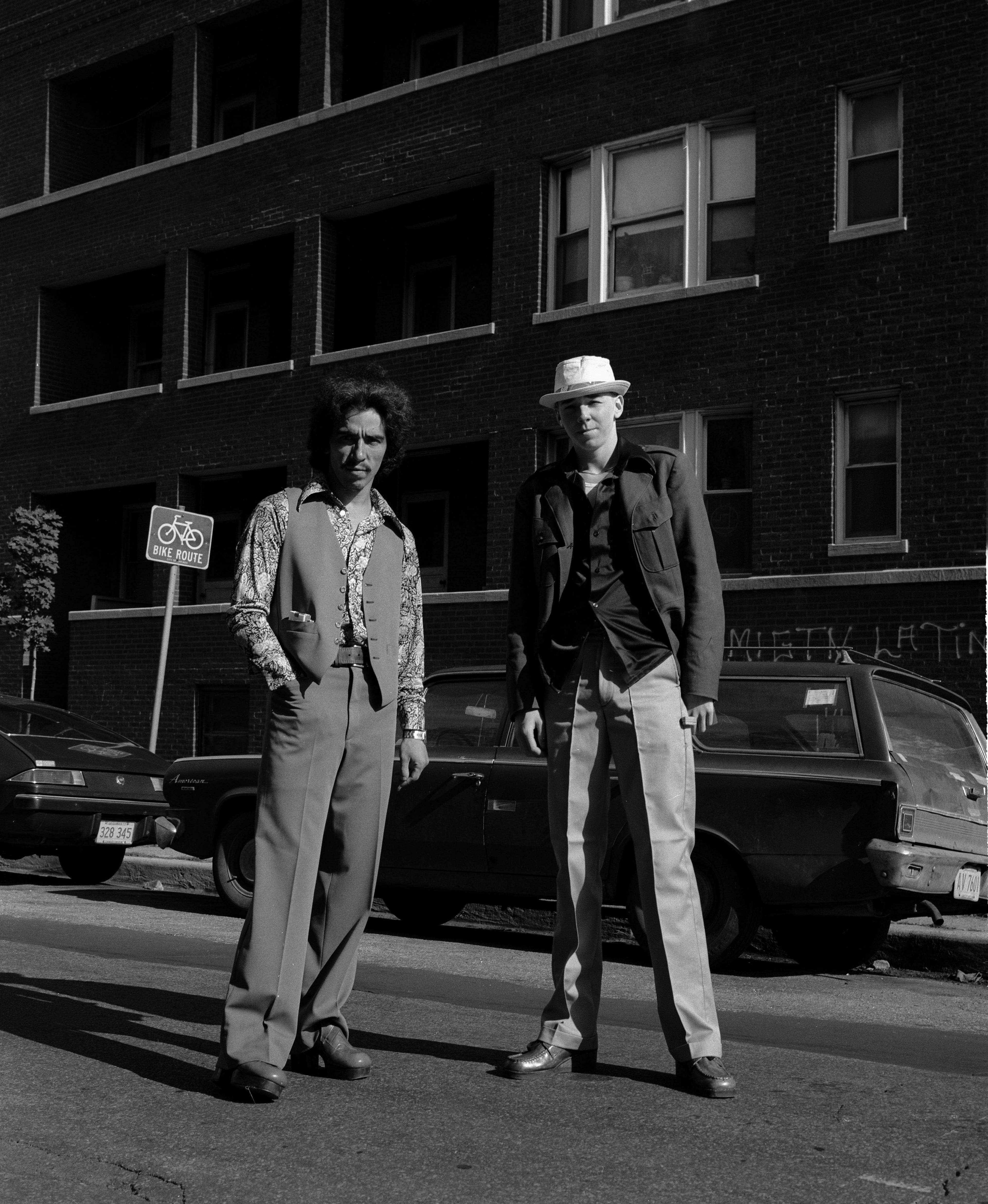 Robert Natkin/GettyTwo men in Chicago, Illinois, in the 1970s.

In the early 1970s, American men began to adopt unconventional styles influenced by non-Western cultures, such as those of India and Africa.

Jeans, bright colours, vests, and fringe were all part of the new “hippie” street style of the late 1960s and early 1970s.

The two men photographed above are wearing platform heels, which were a popular shoe at the time for both men and women.

In the 1970s, many people embraced their natural hair. 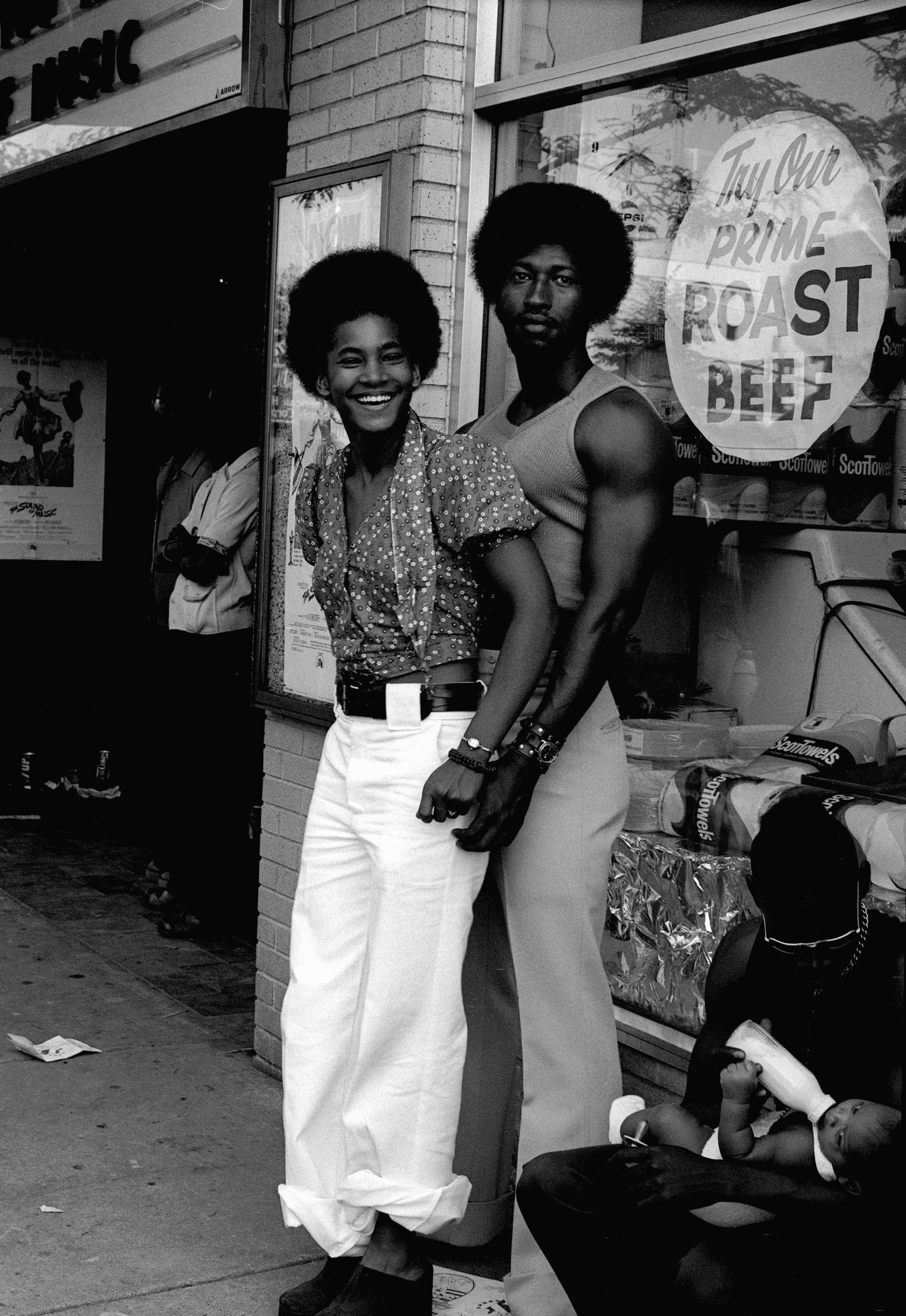 Robert Natkin/GettyA couple in front of a grocery store in 1973.

Throughout the 1970s, many women and men also wore loose pants with fitted tops.

And during the decade, many black men and women wore their hair naturally in afros, which became a significant style that was referred to by some as “the epitome of the black is beautiful movement.” During this decade, musical icons like Jimi Hendricks and Diana Ross were also known for their afros.

At the time, many began to view afros as a form of activism that encouraged people of colour to embrace their natural hair.

Bold patterns and feathered hair were all the rage in the 1980s. 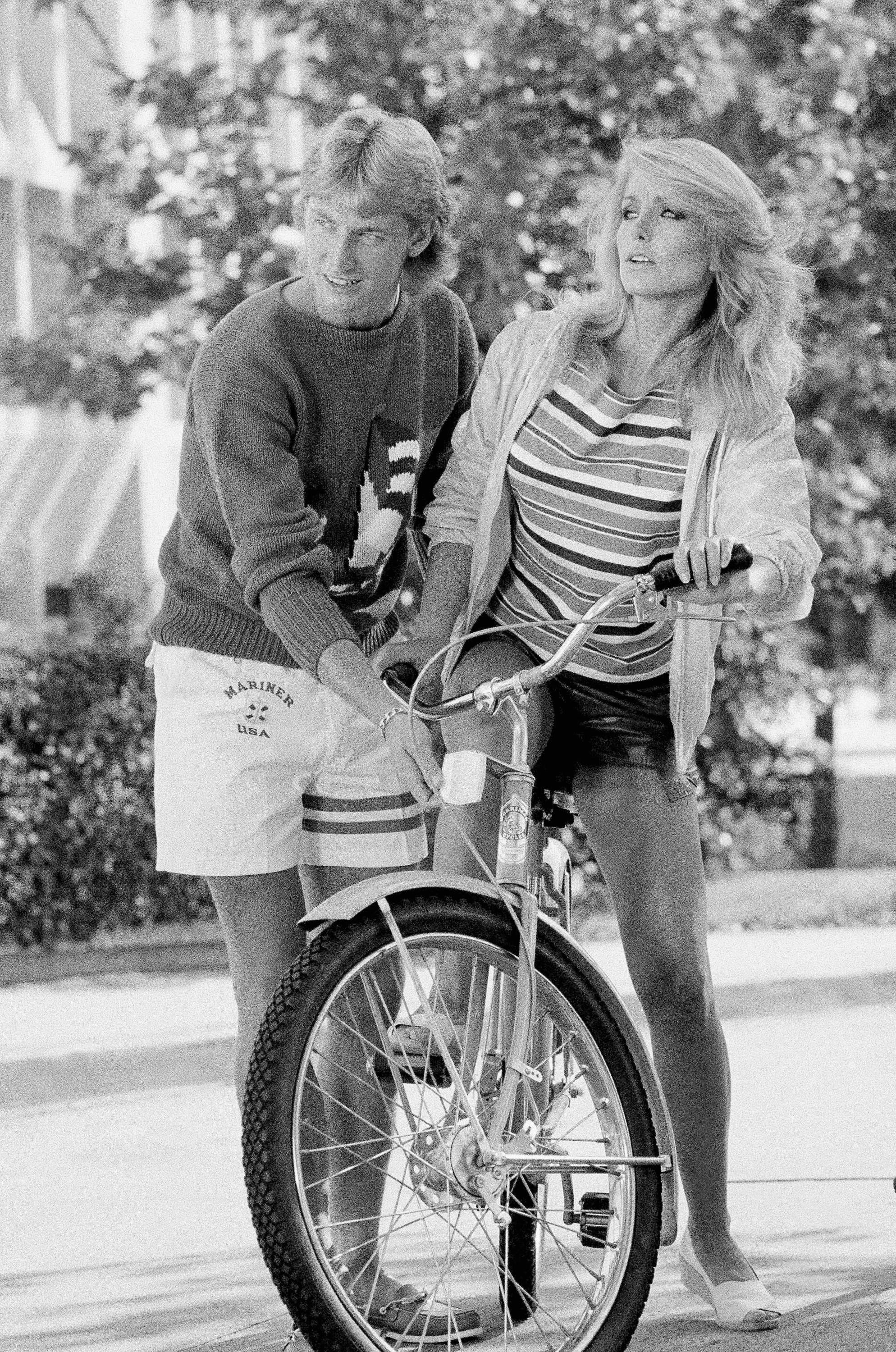 It’s no secret that 1980s street style was often bold. People could often be seen rocking bright colours and patterns with short shorts and big hair.

Even when it was bold, 1980s style was often preppy, featuring pastels, soft sweaters, and billowing silhouettes. Just like today, it was common to see people wearing athletic wear as street clothing. 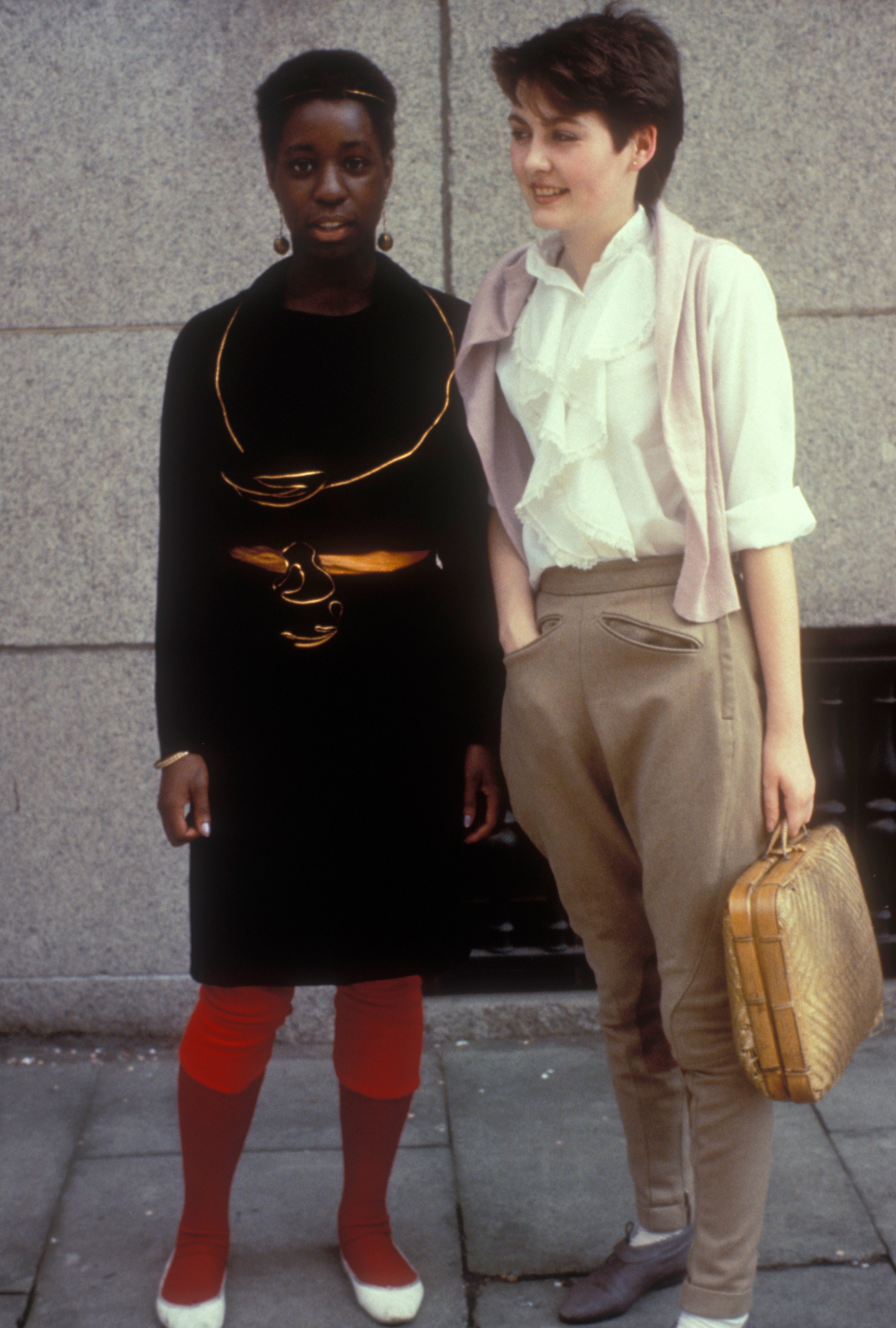 In the 1980s, more women were going to work than ever before and thus street style also saw more bold silhouettes, including shoulder pads, tucked in blouses with wide pants, tights, and pencil skirts.

This was often referred to as “power dressing.”

In the 1990s, even playful styles had a hint of grunge. 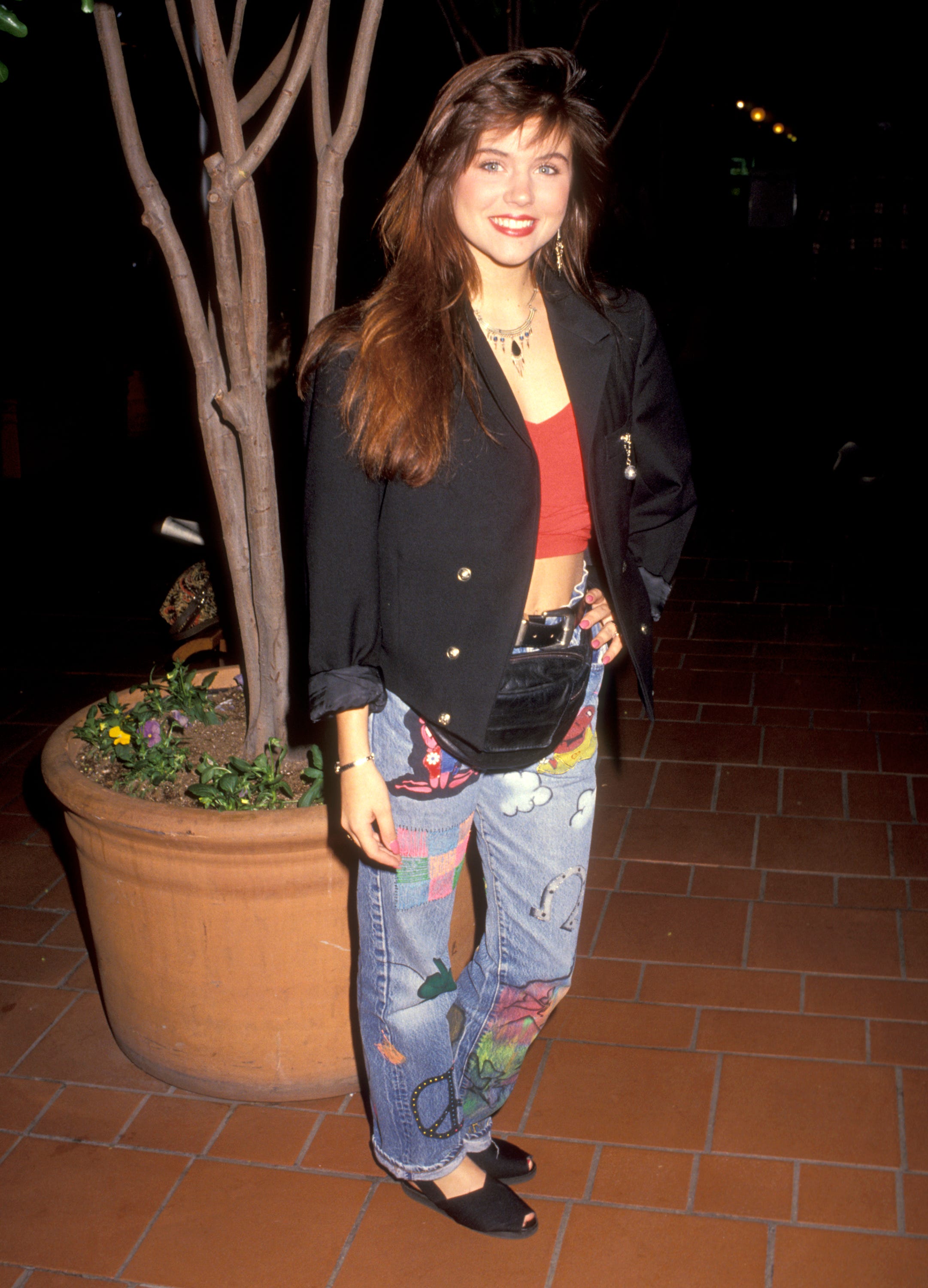 In the 1990s, street style meant playing with lengths and layers. Tiny crop tops would be layered with oversized jackets to give a hint of grunge.

Denim was all the rage and if it was ripped or patterned, even better. Street style in the 1990s took some cues from the 1970s and 1980s with fishnets, bold colours, and animals prints. Women often wore high-neck shirts with patterned miniskirts and threw on backpacks for good measure.

Men embraced prints like plaid too, but they rocked it more often on oversized flannels.