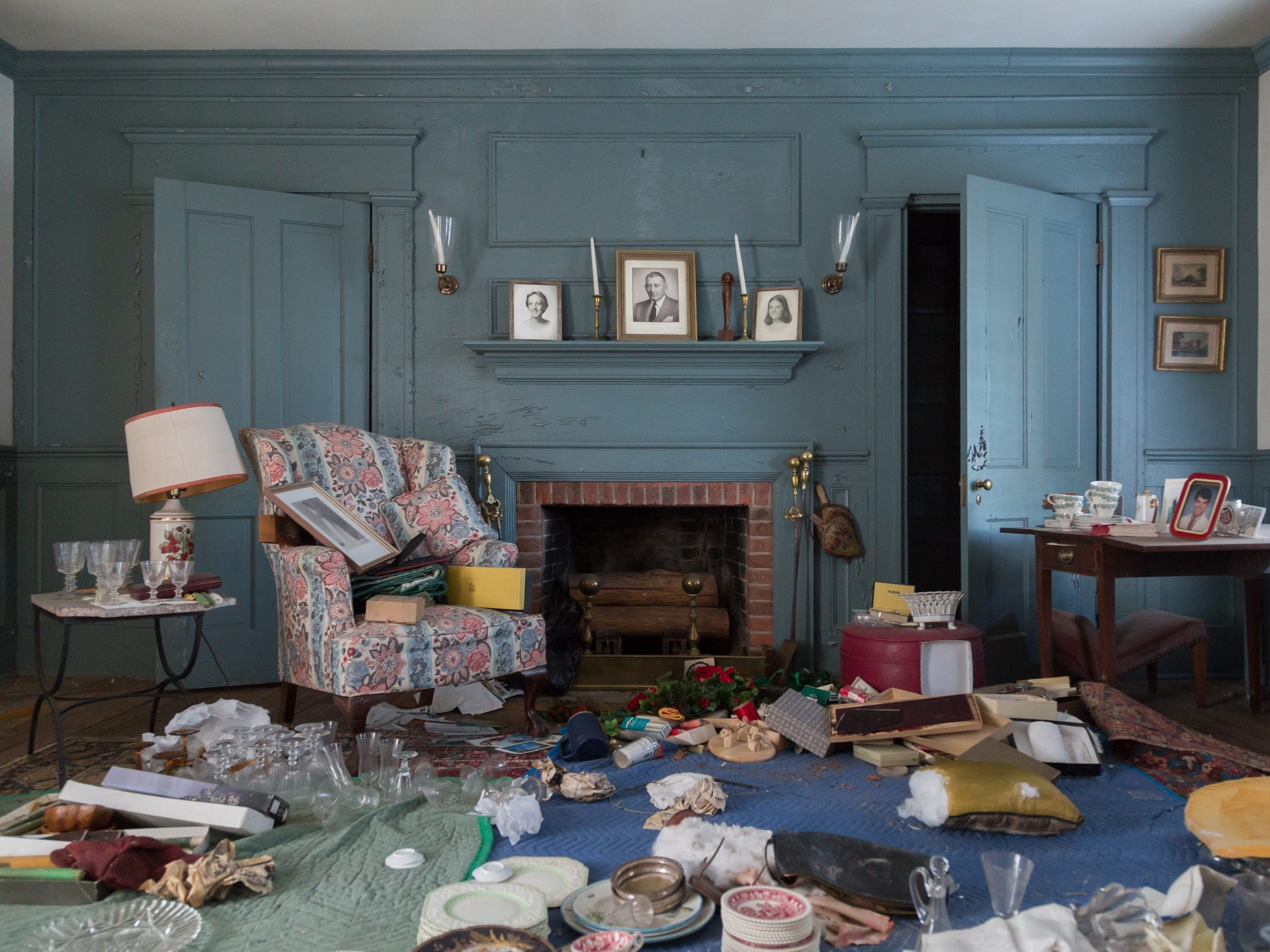 When exploring abandoned houses, one may never know what they will find, but one photographer discovered a real treasure in a decrepit house in Virginia.

Bryan Sansivero, a photographer from Long Island, New York, entered the house in Virginia in October 2019 and was surprised to find an abandoned doctor’s office attached. Inside, the practice was fully intact with medicine from the 1800s, gurneys, and skeletal remains.

Keep reading to take a look inside the eerie house full of mystery.

While driving through Virginia, photographer Bryan Sansivero stumbled upon an empty house hidden behind overgrown greenery. 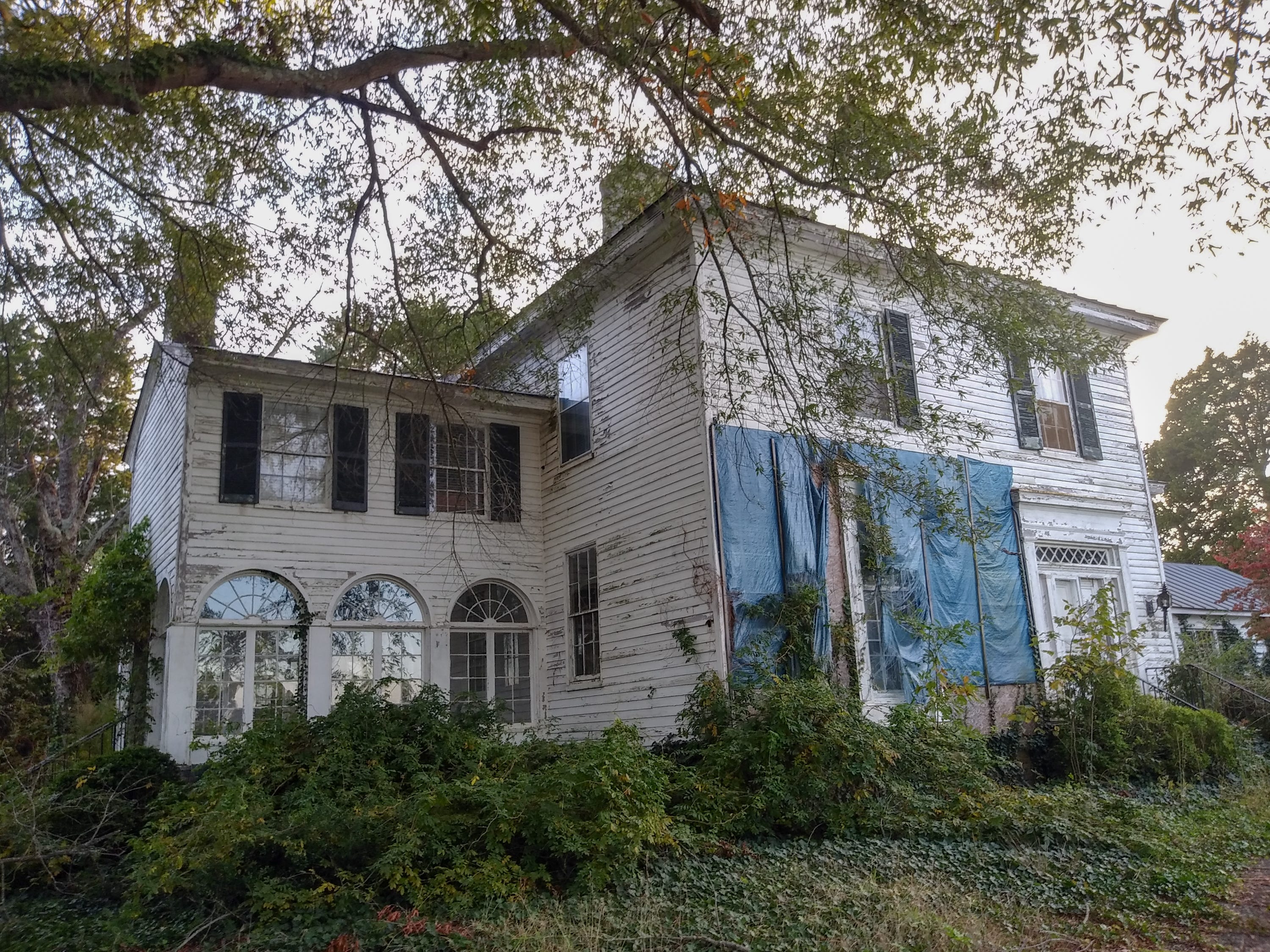 Bryan SansiveroExterior of the house.

Sansivero said he doesn’t like to share the exact location of the house because he wants to protect the structure from looting and vandalism. But he did say that the house is located in northern Virginia in a town that has a lot of abandoned houses.

“I couldn’t believe how big it was and how amazing the architecture was,” he told Insider. “I was a little hesitant to go inside but also excited.”

When he stepped inside, Sansivero was greeted by a taxidermy wolf in the foyer. 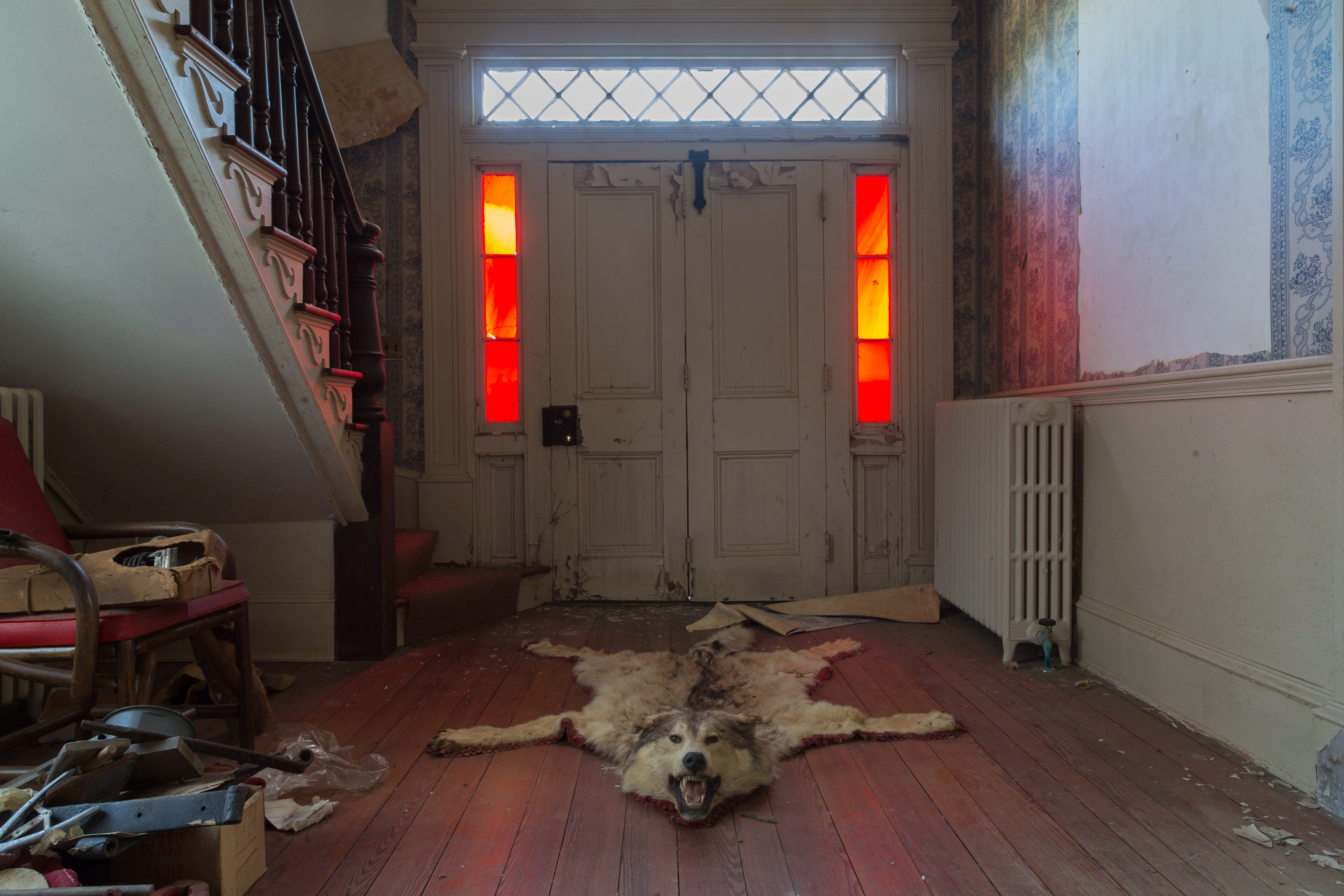 “I always say that I love exploring the unknown,” he said. “[I love] not knowing what’s around the next corner, like a giant taxidermy wolf rug.”

Each of the rooms in the abandoned house seemed to be perfectly preserved. 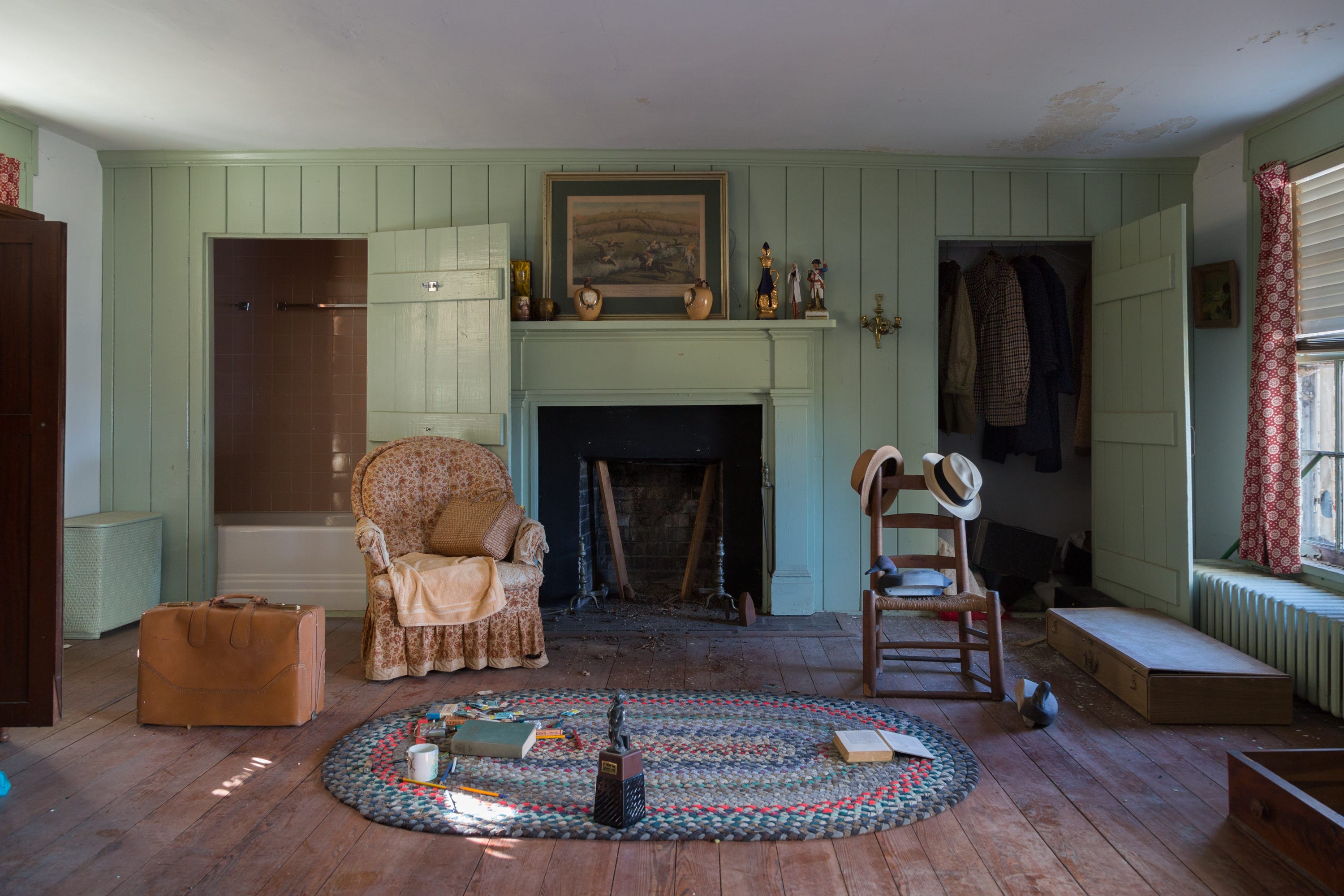 Hats were still hanging from the back of chairs as if someone left them there casually one day. Clothes still hung in the closets as if whoever lived here left in a hurry.

The kitchen was still fully stocked, but a lot of it was left askew. 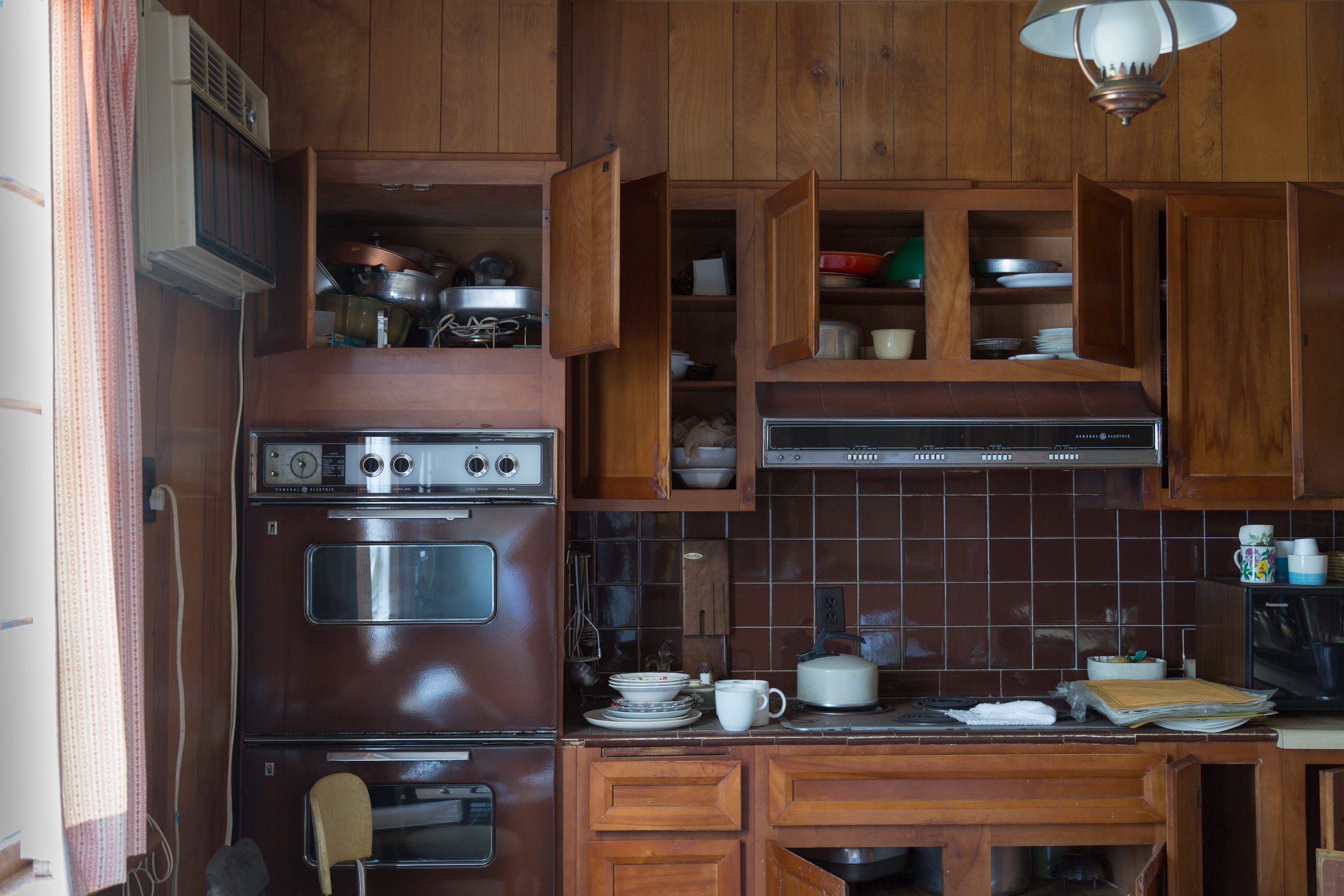 Sansivero said he believes others beat him to the home and looted some objects.

An upstairs hallway leads to several rooms that held even more interesting artifacts from the home’s past residents. 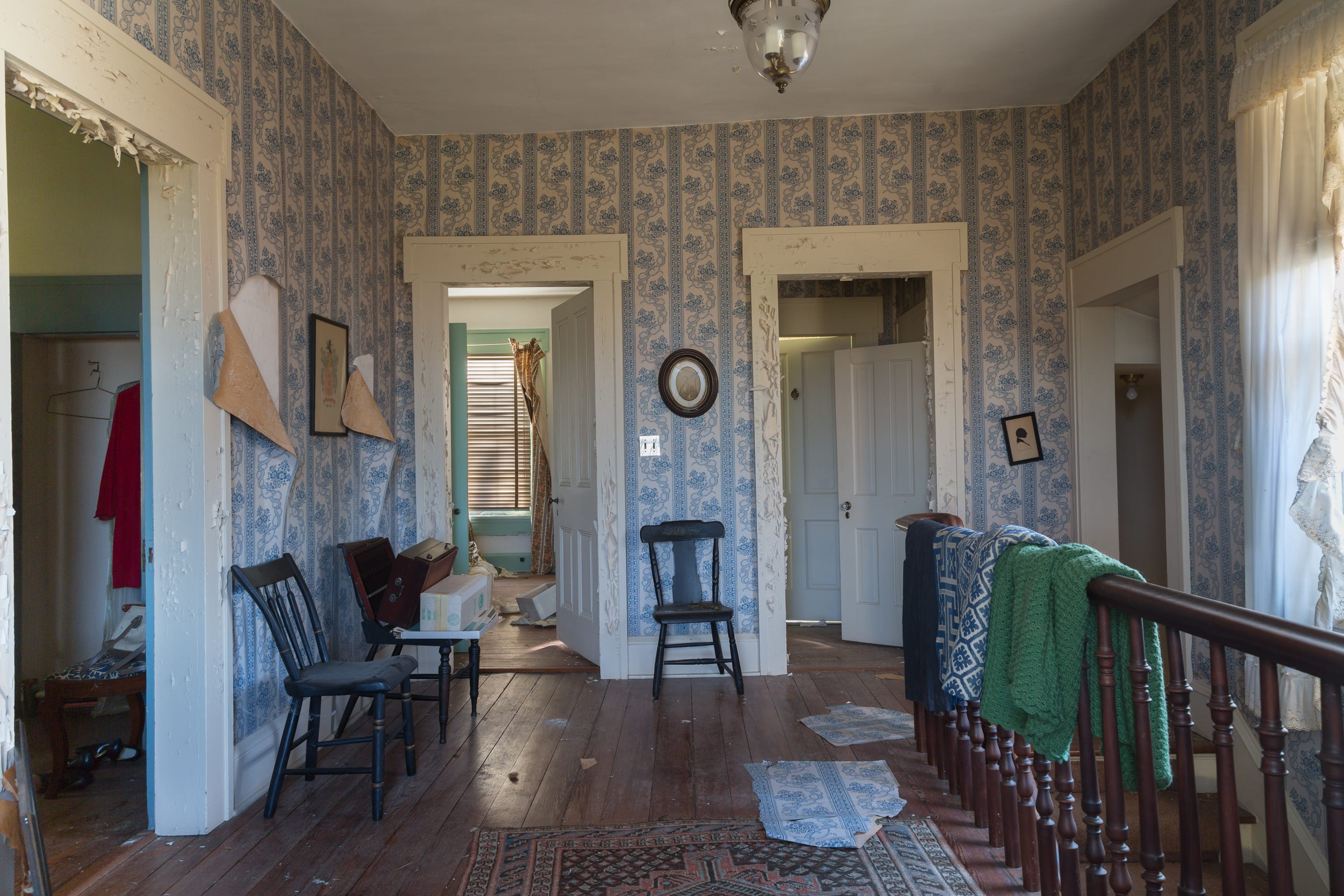 Before entering the rooms, Sansivero took note of the blankets that were thrown over the banister and the chairs that sat idly in the hallway.

The rooms off the hallway were filled with belongings, and clothes were still hanging in the closets. 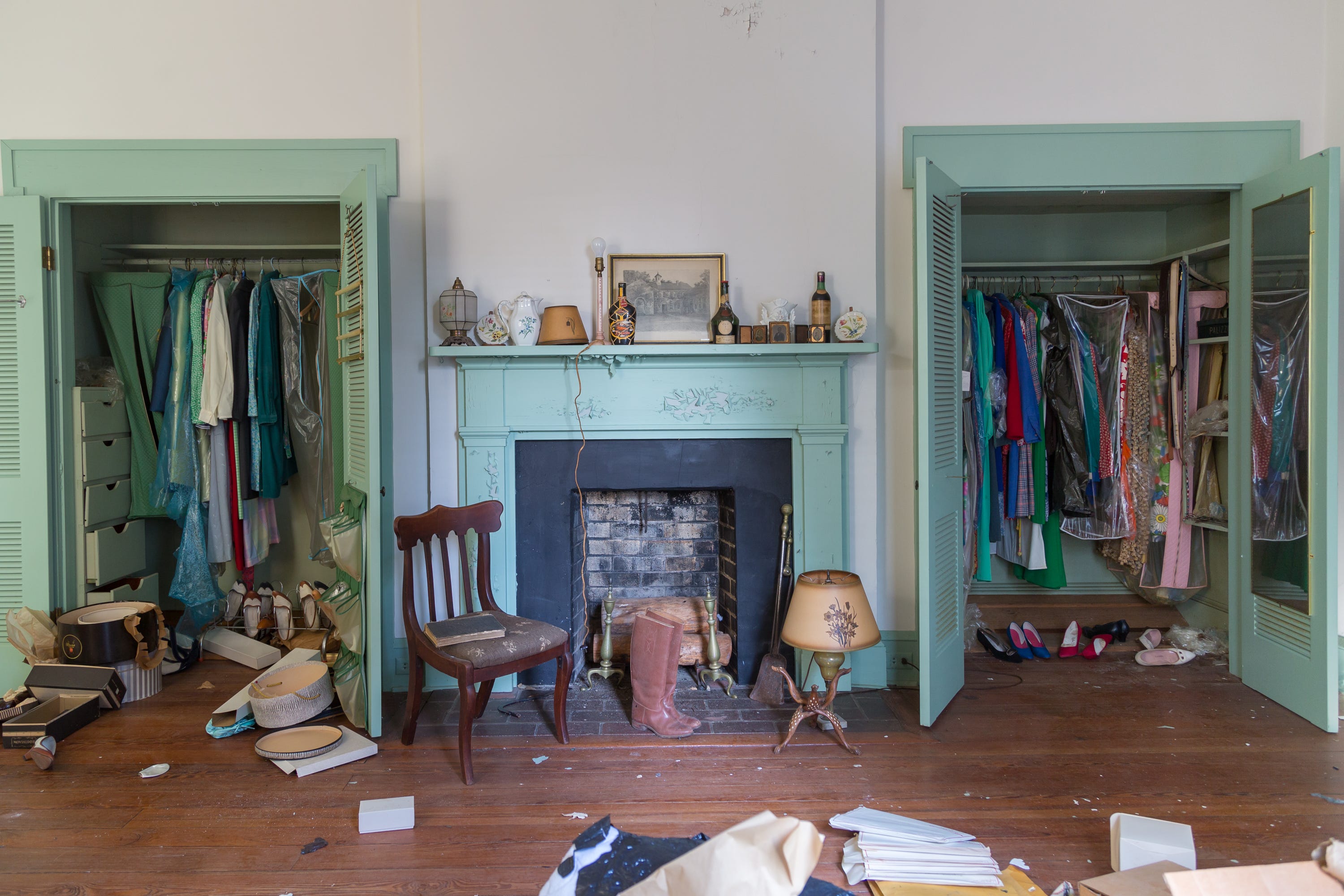 Bryan SansiveroClosets and a fireplace.

The fireplace mantel is filled with pictures.

Shoes were scattered inside the closets — almost as if the residents left yesterday. 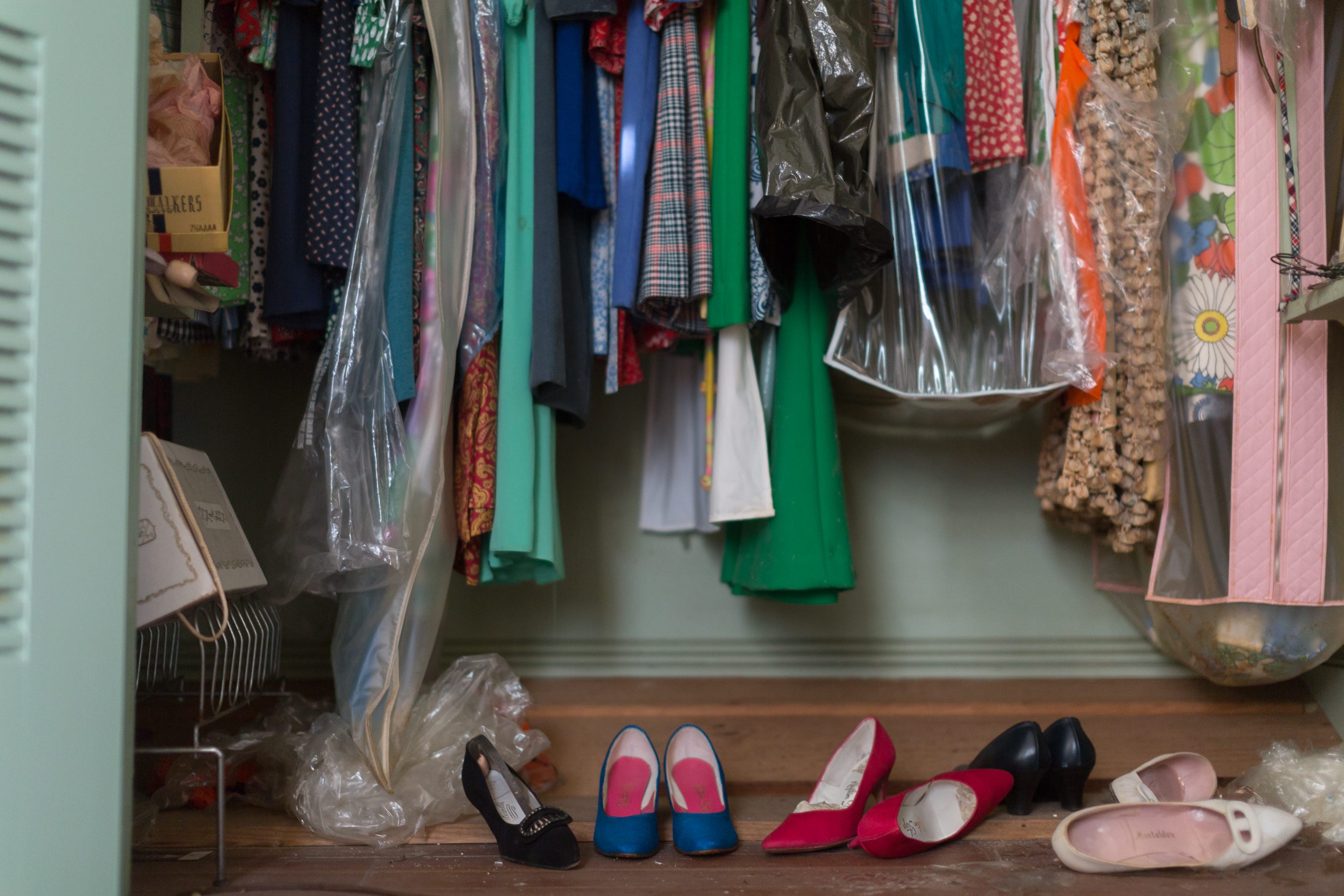 “With most abandoned houses, there is no family or heirs to claim the property,” Sansivero said. “It falls into disrepair, belongings, and all.”

The pictures that sit on the mantel appeared to be from the 1800s. 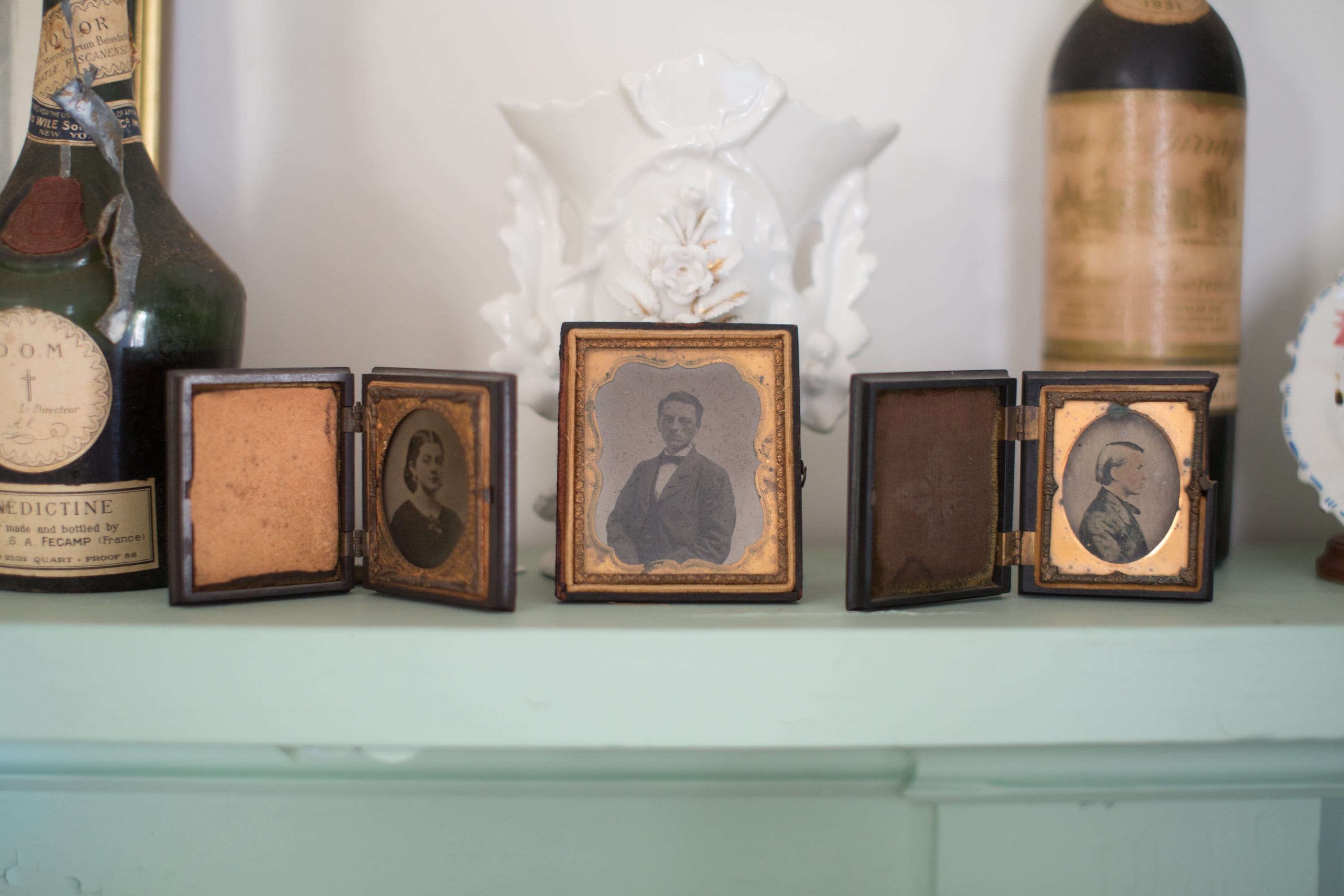 “It’s hard to tell how far back the house dates because the architecture is very unique,” Sansivero said. “If I had to guess I would say mid 19th century. It may be older than that though.”

One of the bedrooms looked completely ransacked … 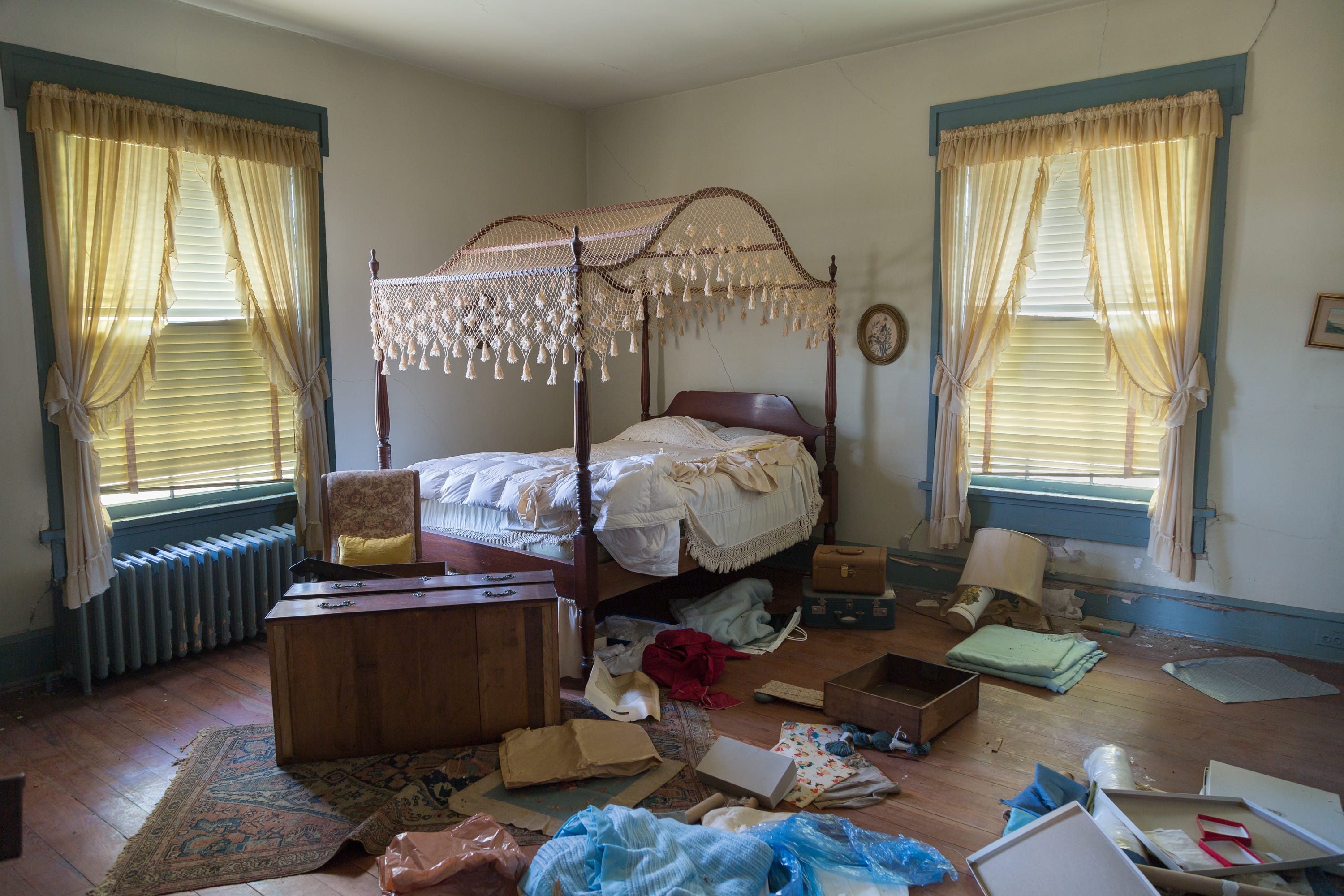 Dresser drawers were scattered on the floor, dumped of anything that was once inside.

… while other bedrooms appeared to be completely untouched. 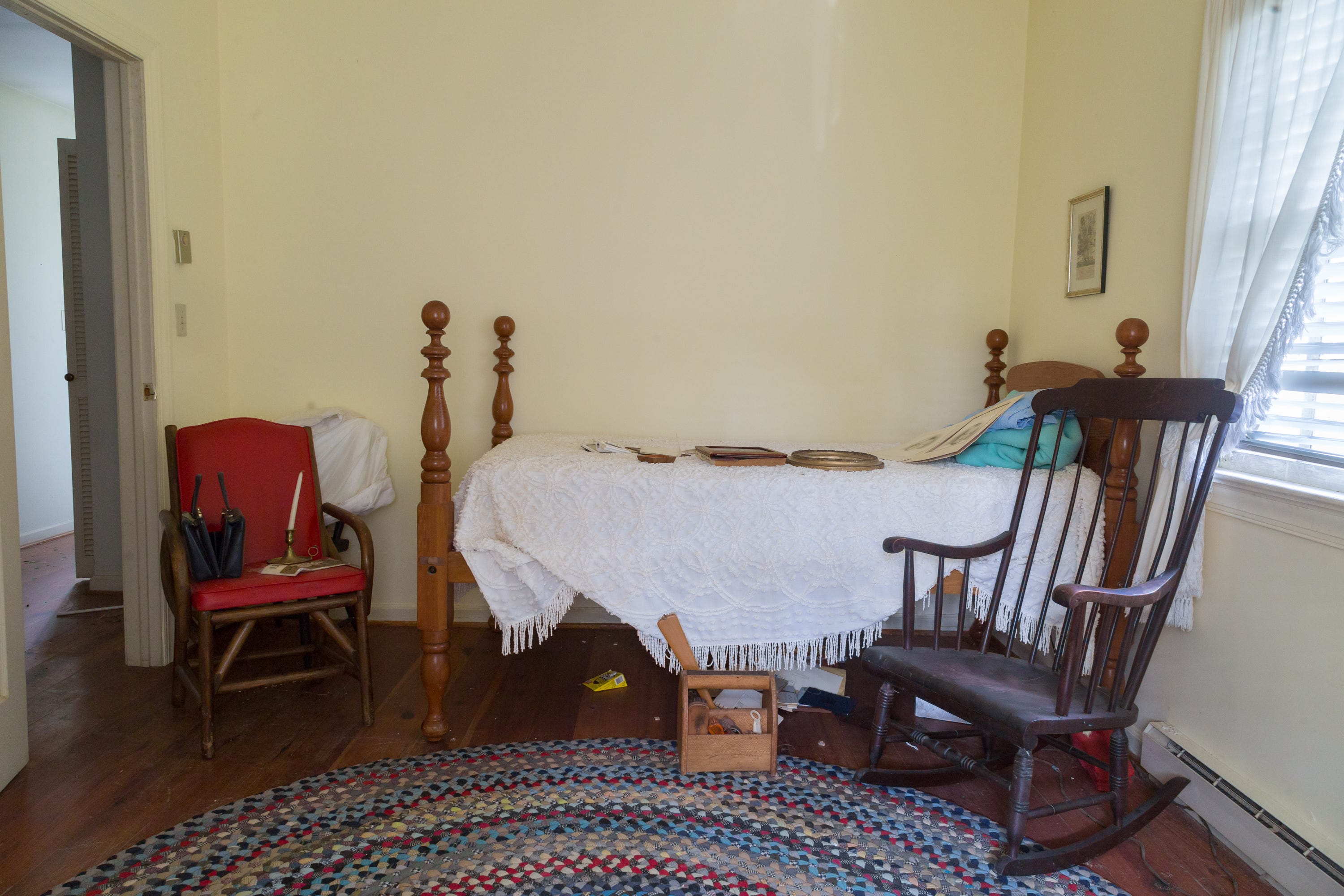 The bed was still made when Sansivero captured this image.

On the bed, Sansivero found pictures of a man and two children. 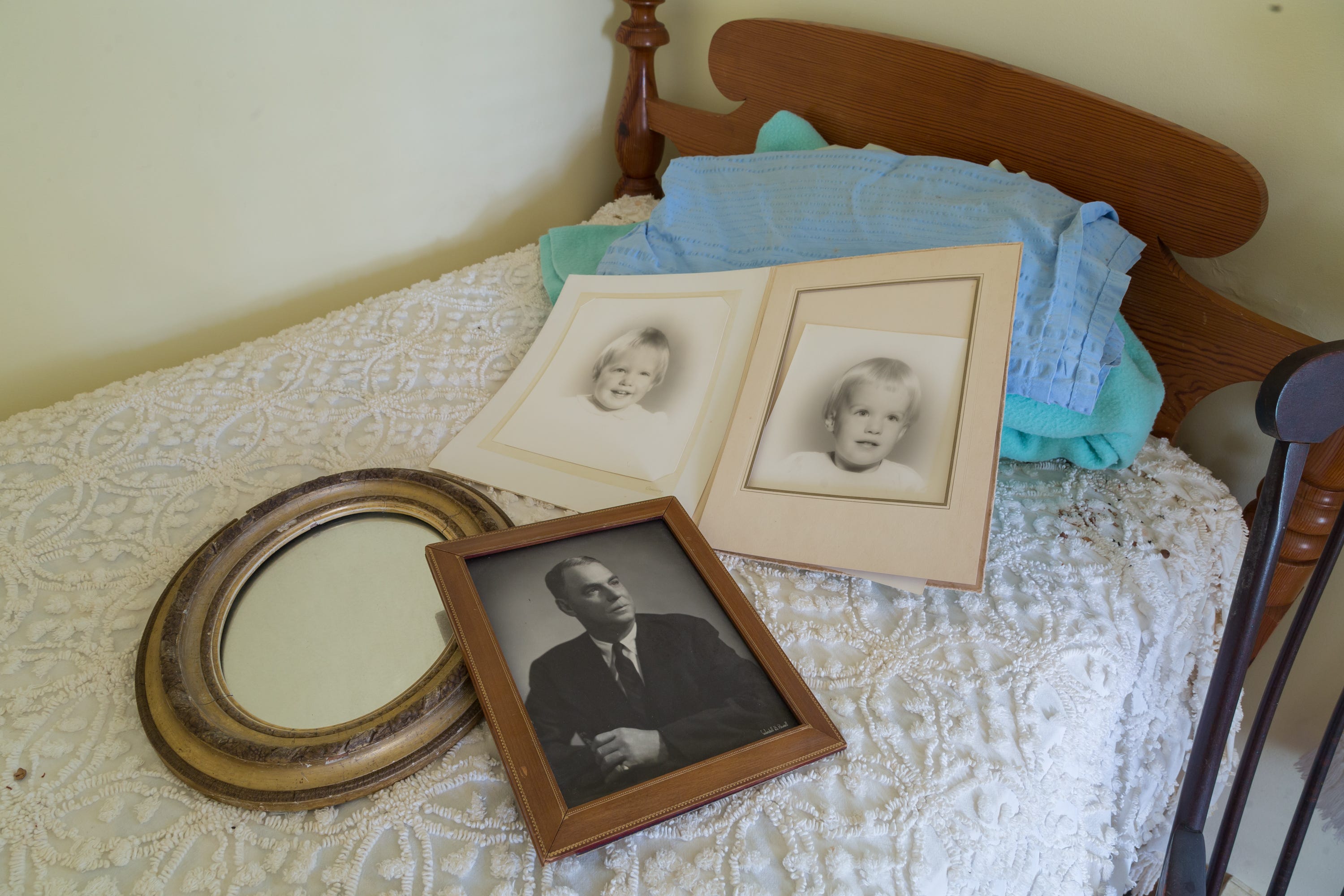 Bryan SansiveroPhotos on the bed.

“The photographs in the house are definitely relatives of or pictures of the owners themselves,” Sansivero said. “I’m not completely sure when the house was abandoned but clearly some photographs are newer than others. Certain clues such as these can help to figure out when the house may have been lived in last and how far back descendants go.”

In some parts of the house, there are remnants of technology, making the home feel like it’s from two time periods. 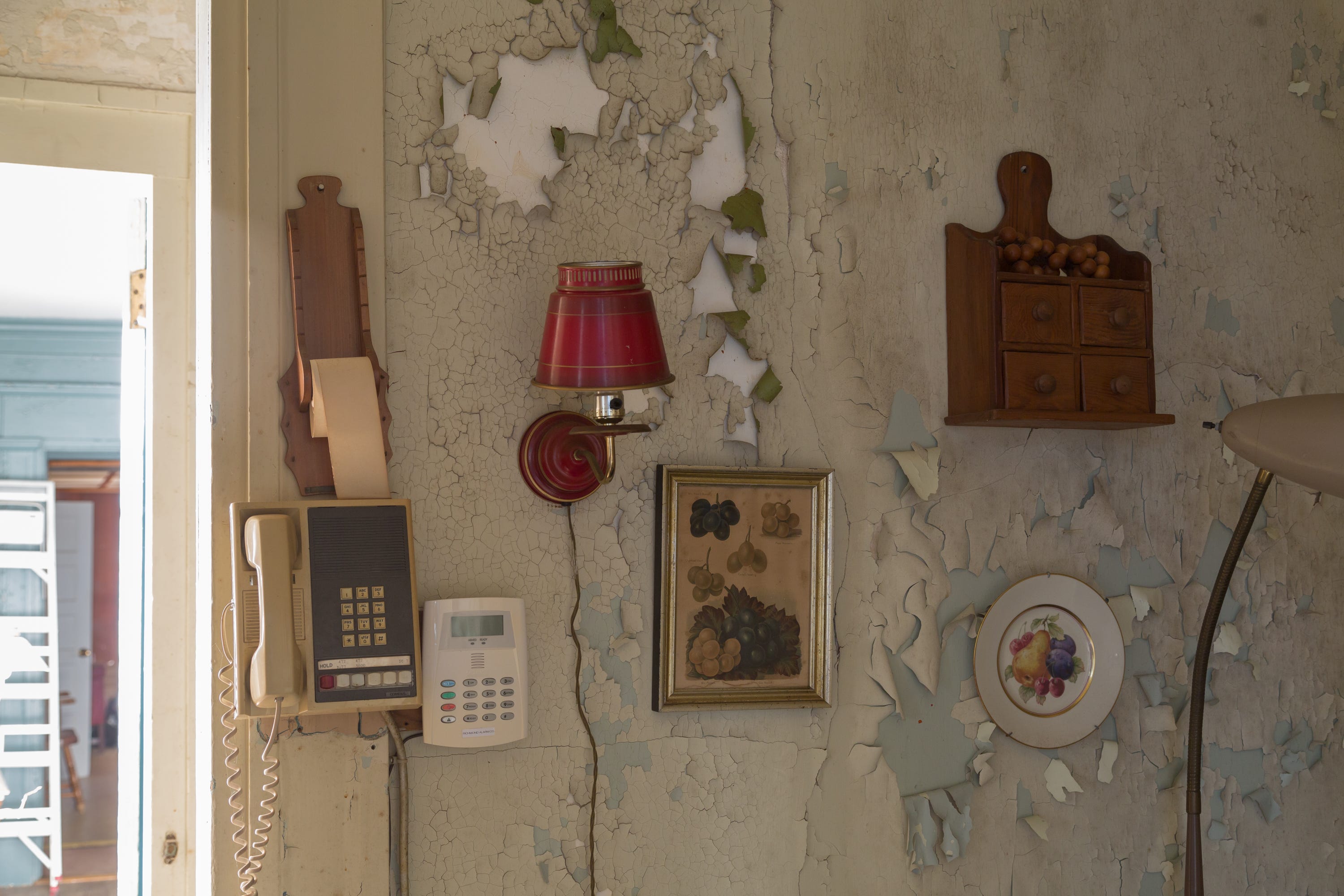 A home phone hangs from a wall where the paint is peeling away.

In another room, there is an old TV and an air-conditioning unit. 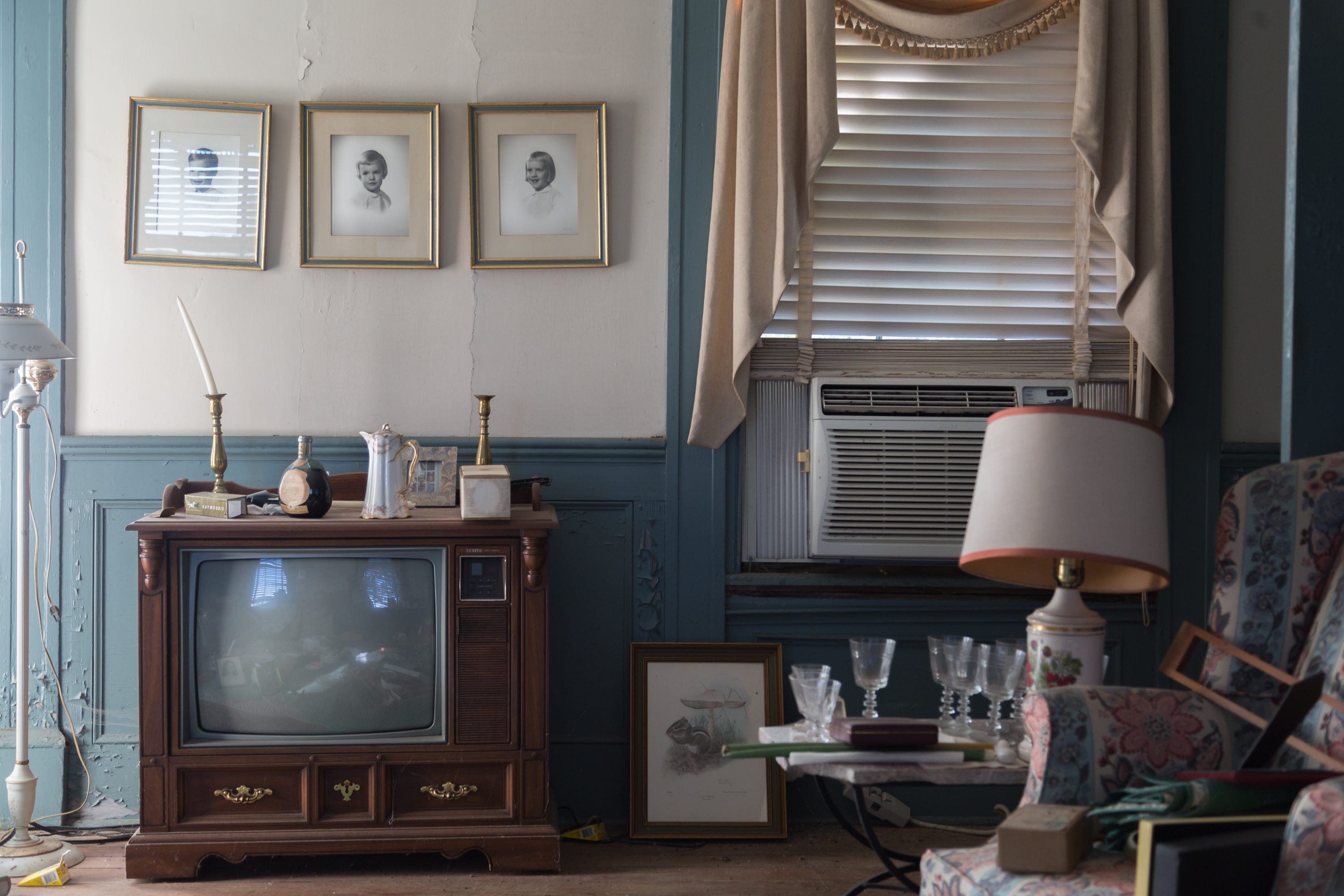 The residence is a blend of old and new.

The photographer found Mother Nature taking back some parts of the home. 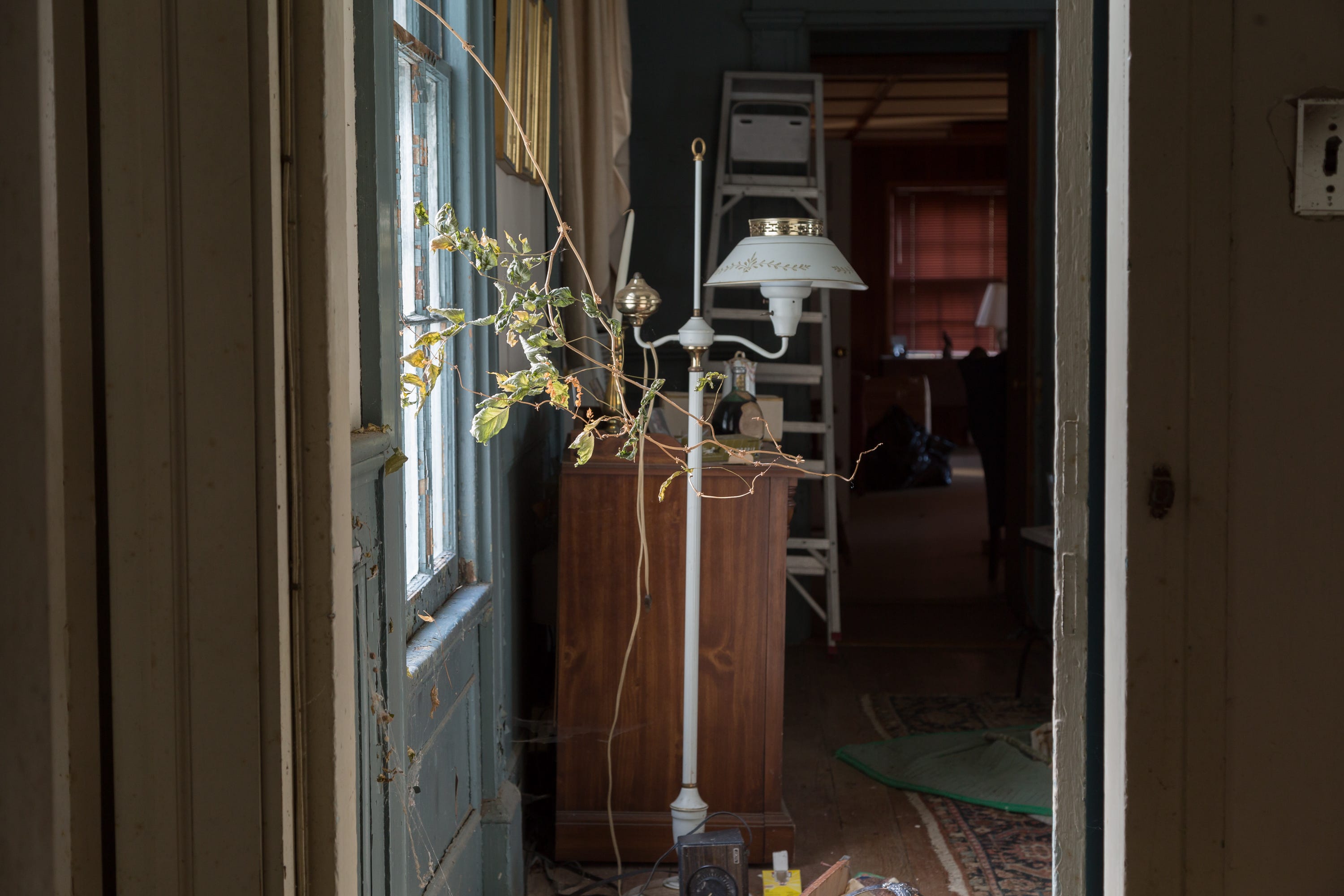 A plant is growing inside the house as nature reclaims the structure.

But what Sansivero found behind this room is what really surprised him. 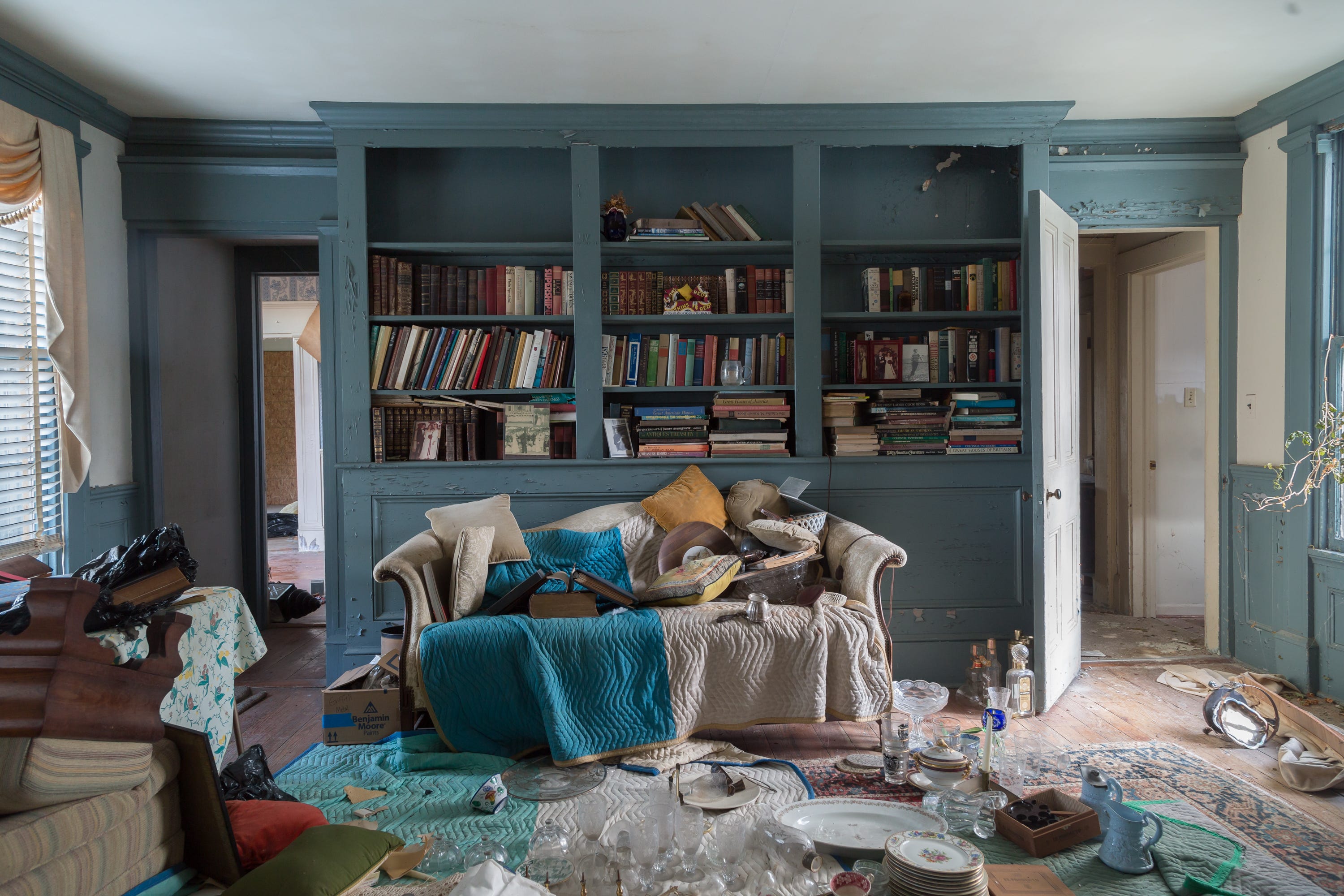 This room seemed to be a library of sorts, even though some of the shelves were empty.

Beyond the library, there seemed to be a waiting room, much like the one you’d find in a doctor’s office. 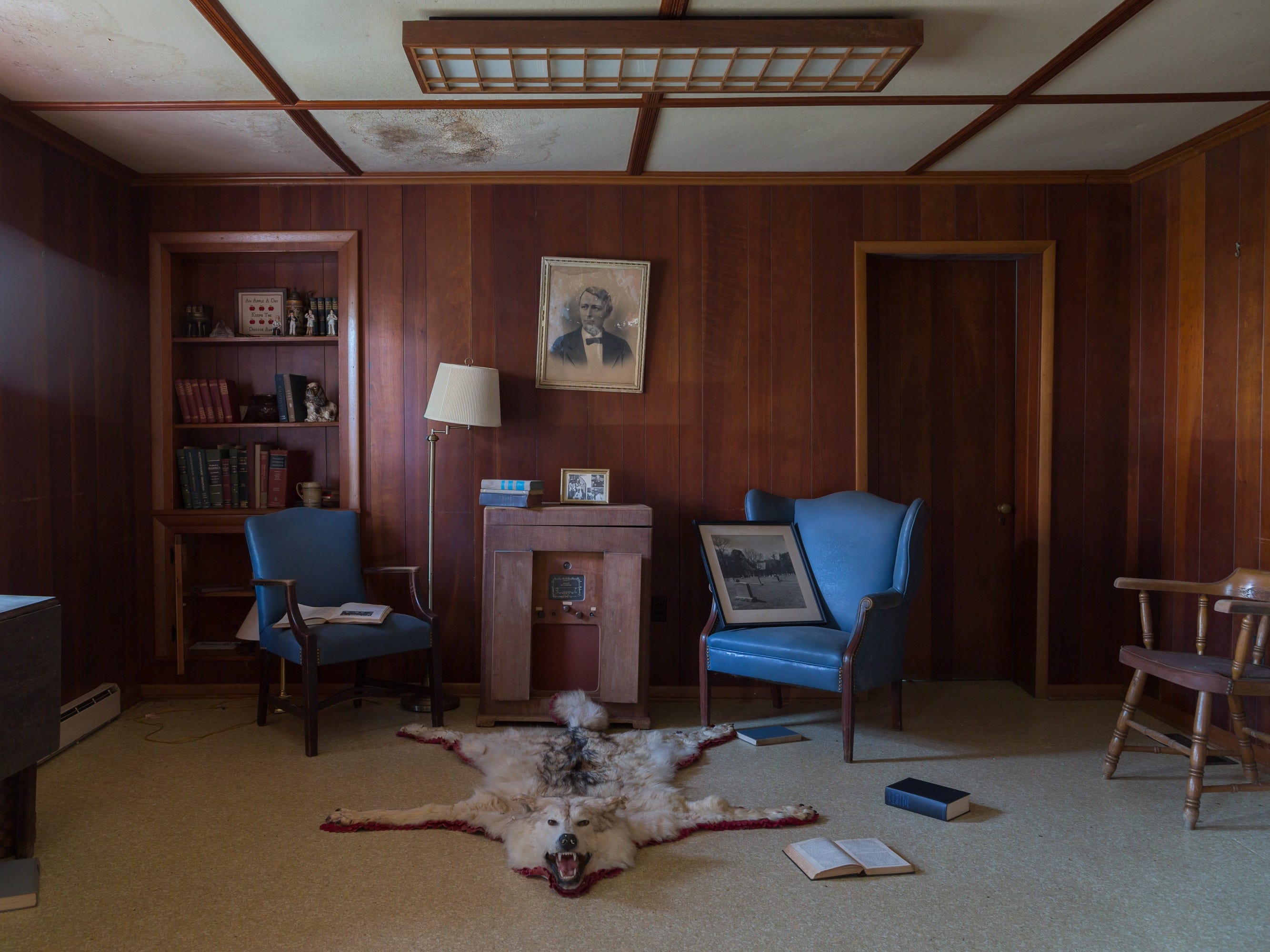 Here, there was another rug made from a wolf and a door that led to an office hallway.

Surprisingly, the hallway led to a doctor’s office examination room. 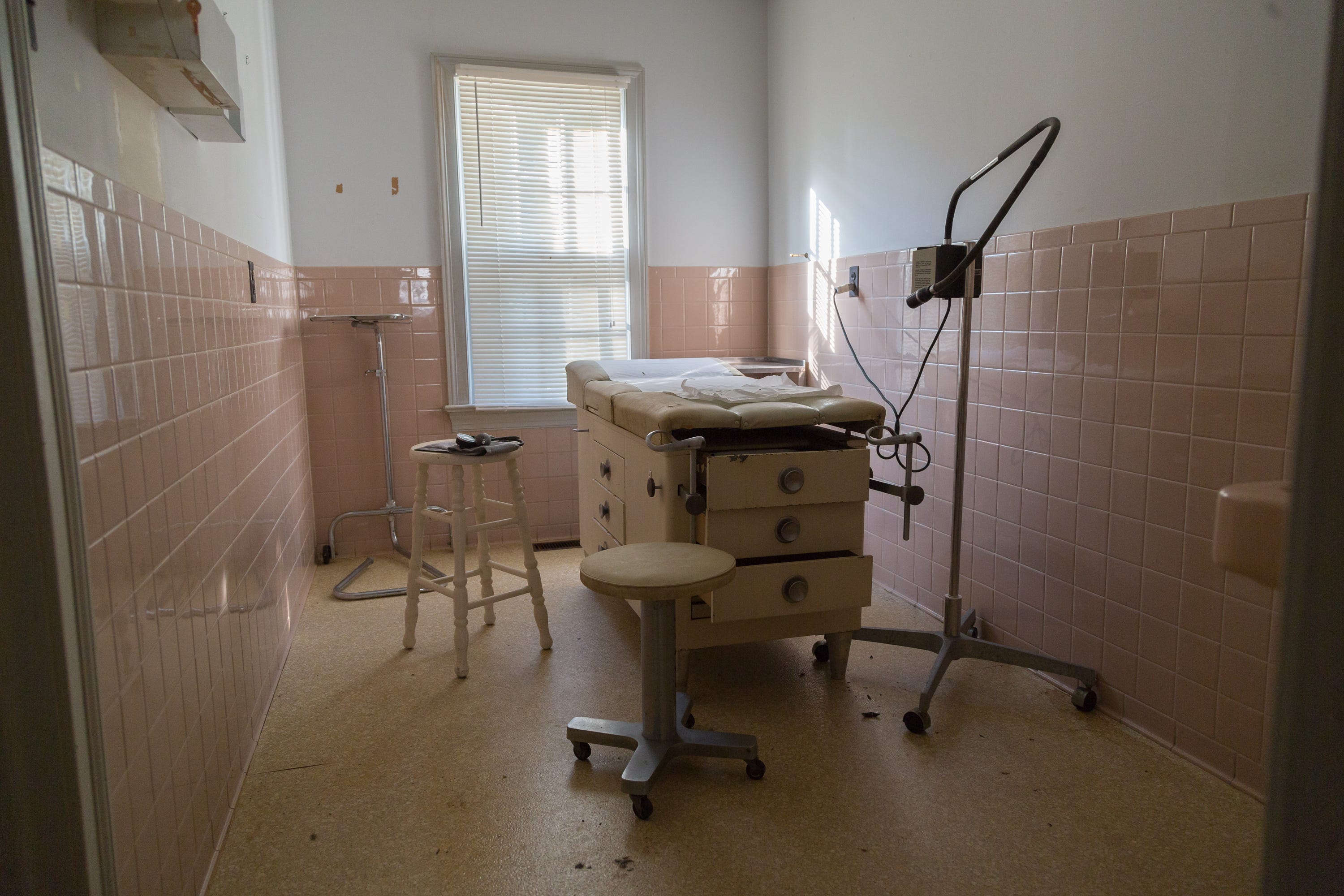 “It’s strange to find a home and doctor’s office in one house,” he said.

Although Sansivero said it takes a lot to creep him out, he said this section of the home did feel strange. 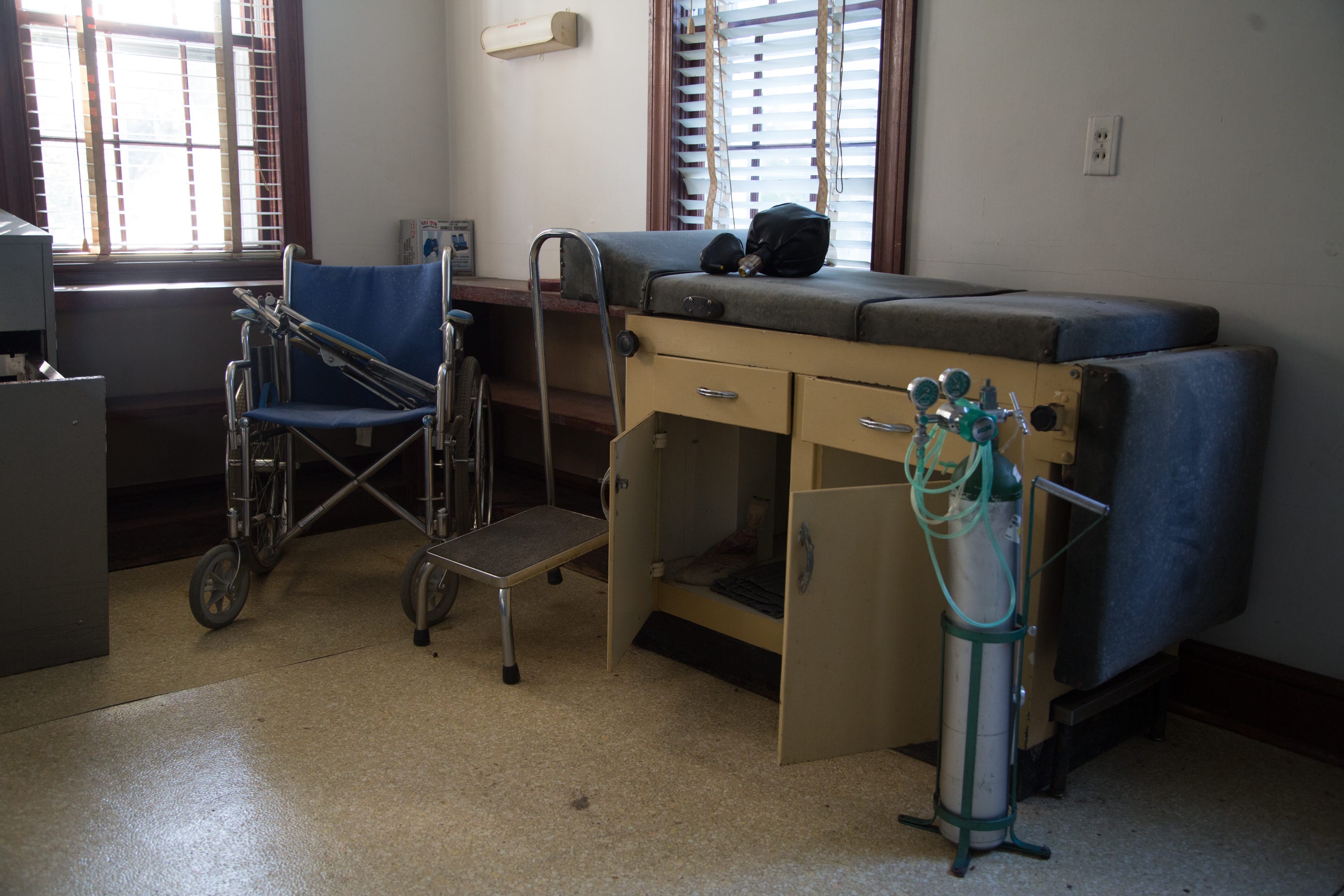 “This part was very eerie because the examination rooms were dark,” he said. “But I thought there must be some really unusual stuff lying around to photograph.”

One tiled room had operating tables and equipment that were left untouched. 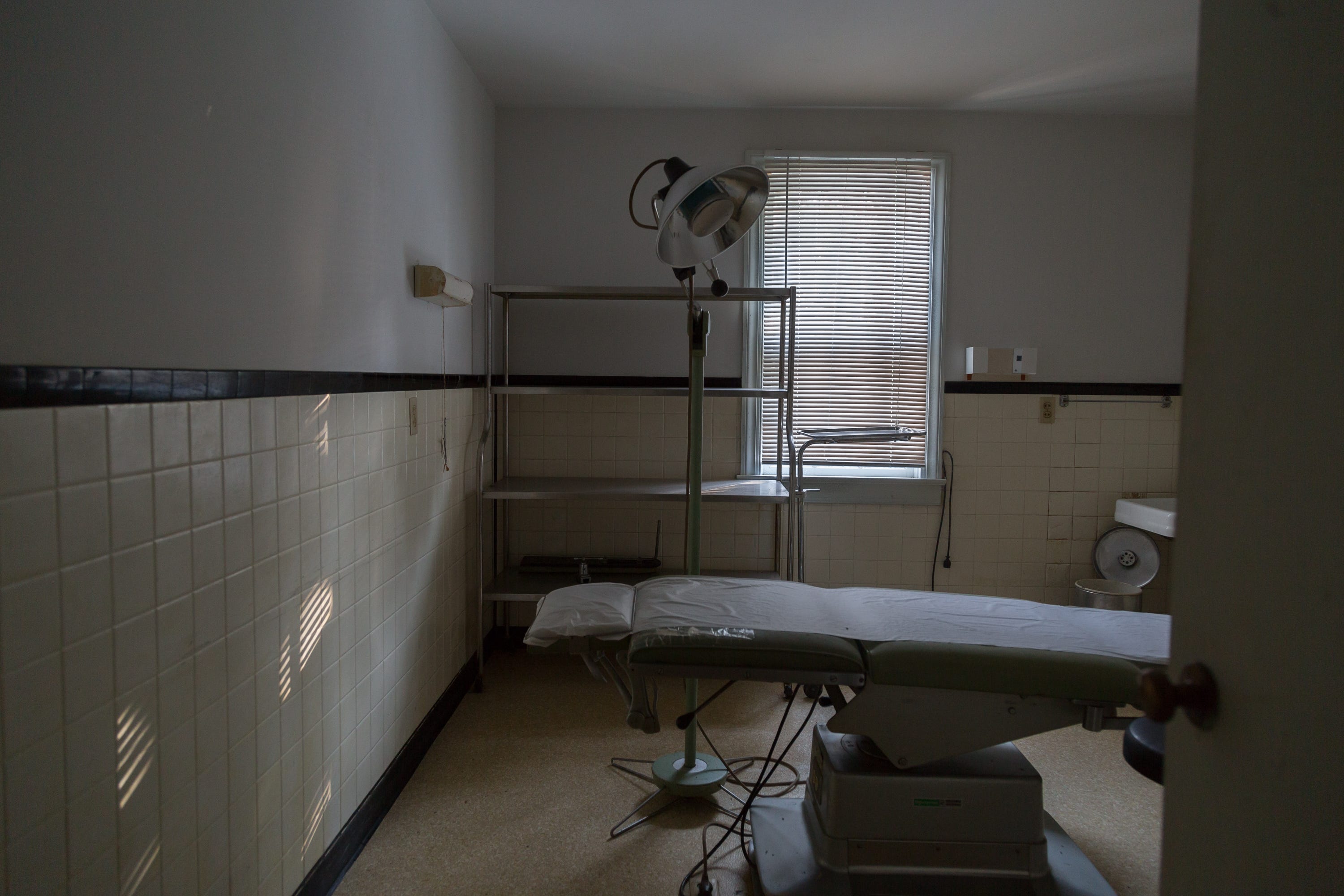 The medical wing of the house was even better preserved than the residential portion.

Shelving in this part of the house was filled with medicine, old books, and a real human’s vertebrae. 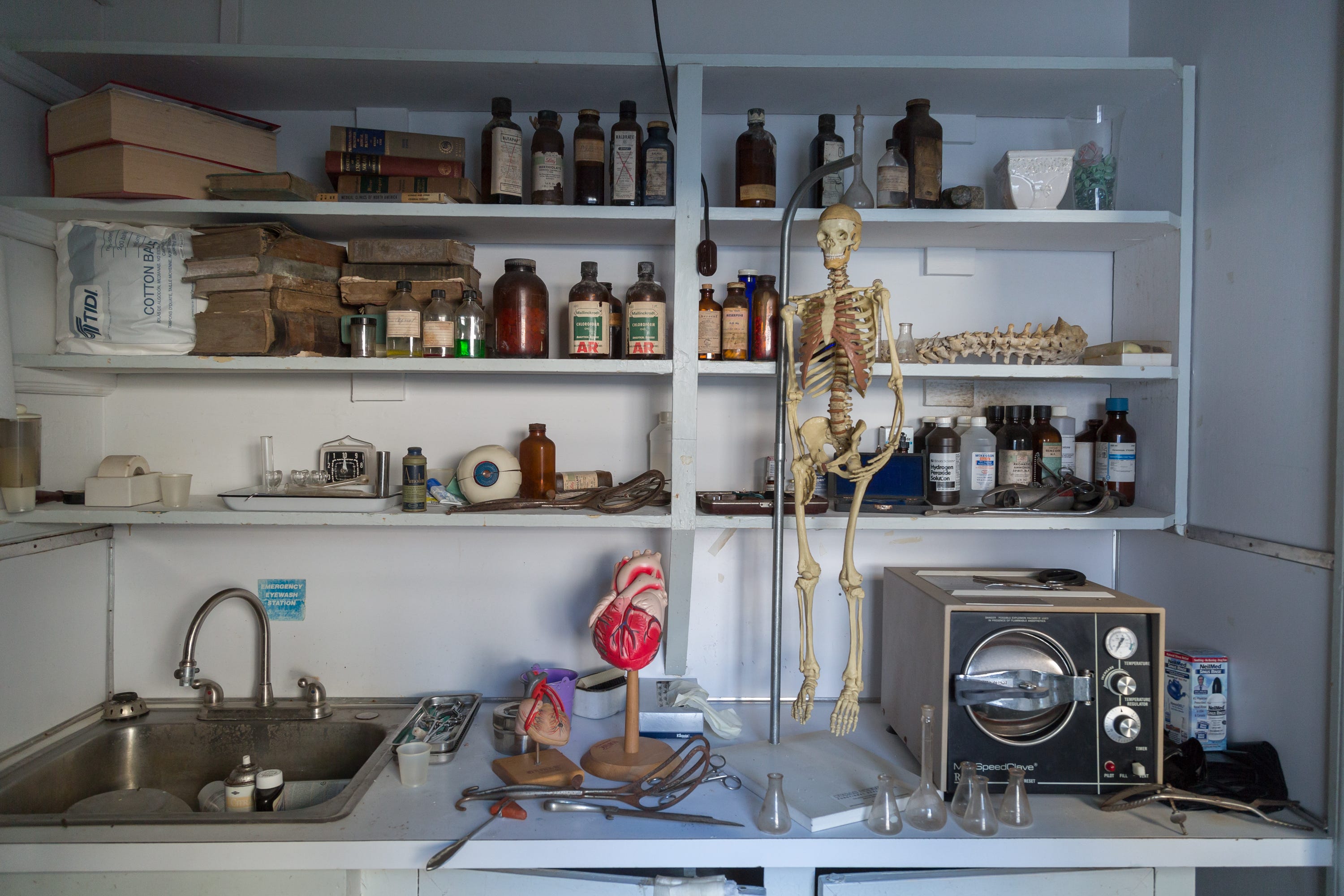 A closer look at the medicine shelf revealed bottles that date back decades. 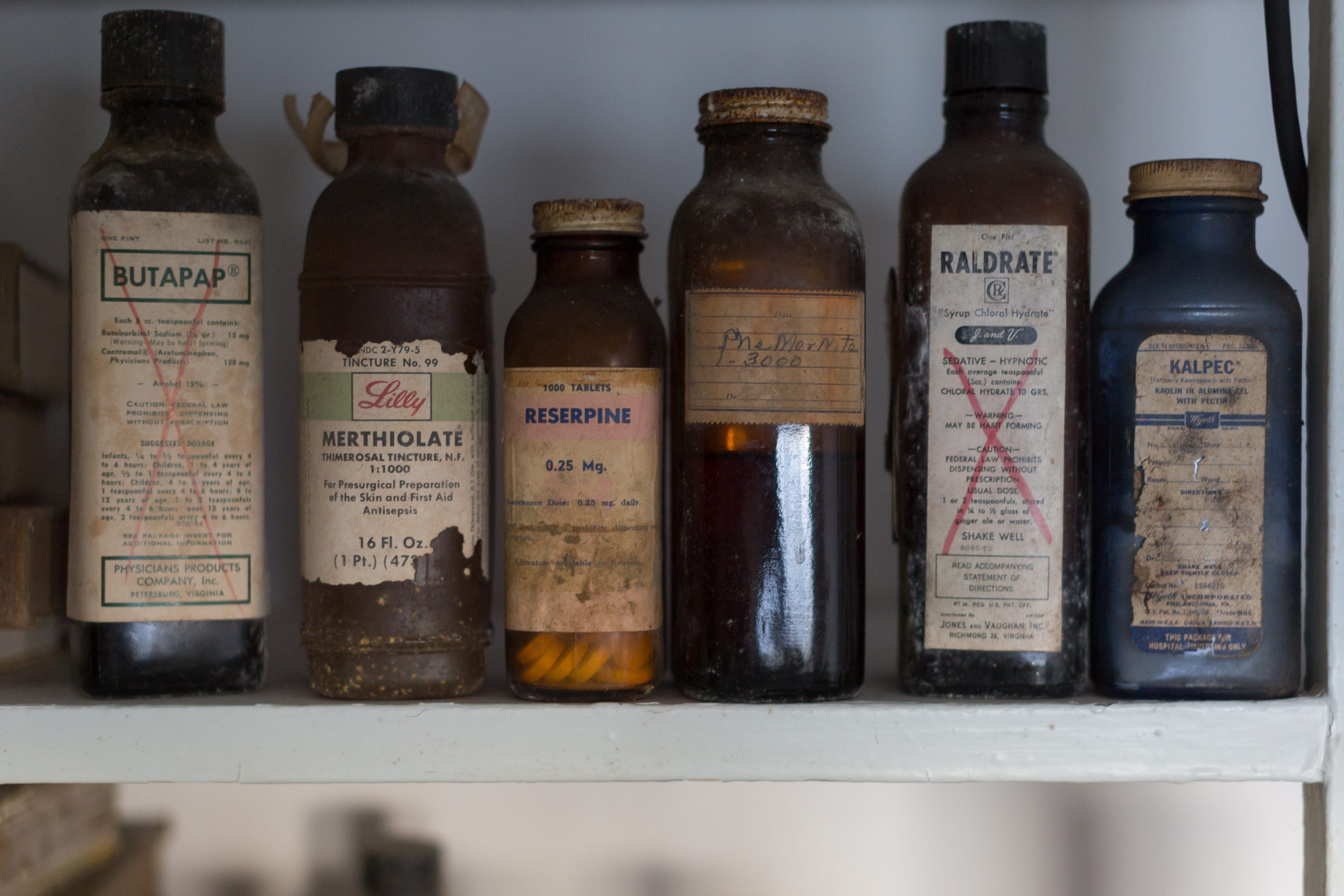 These bottles of medicine were once used as sedatives, to treat blood pressure, and to alleviate headaches.

“My pictures, I hope, provoke you to ask why and how something like this could be left behind,” Sansivero said. 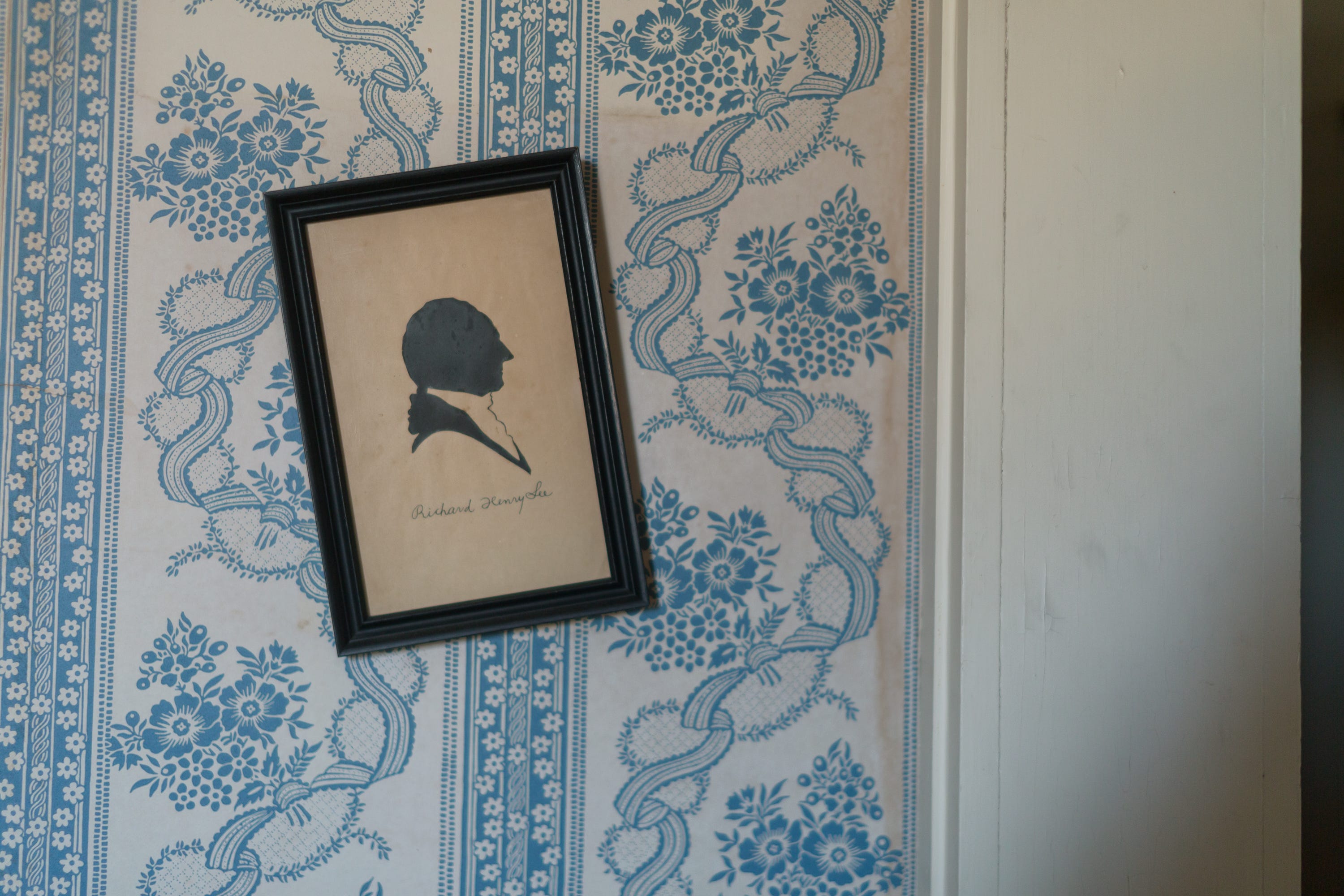 Although much of the house is shrouded in mystery, Sansivero said that is actually what he hoped to capture in his photographs.

“If a photograph leaves you wanting to see more, or asking yourself these questions, then I feel like I succeeded as a photographer,” he said.

Sansivero said he hopes his pictures last forever, as the “mad doctor’s” house continues to crumble. 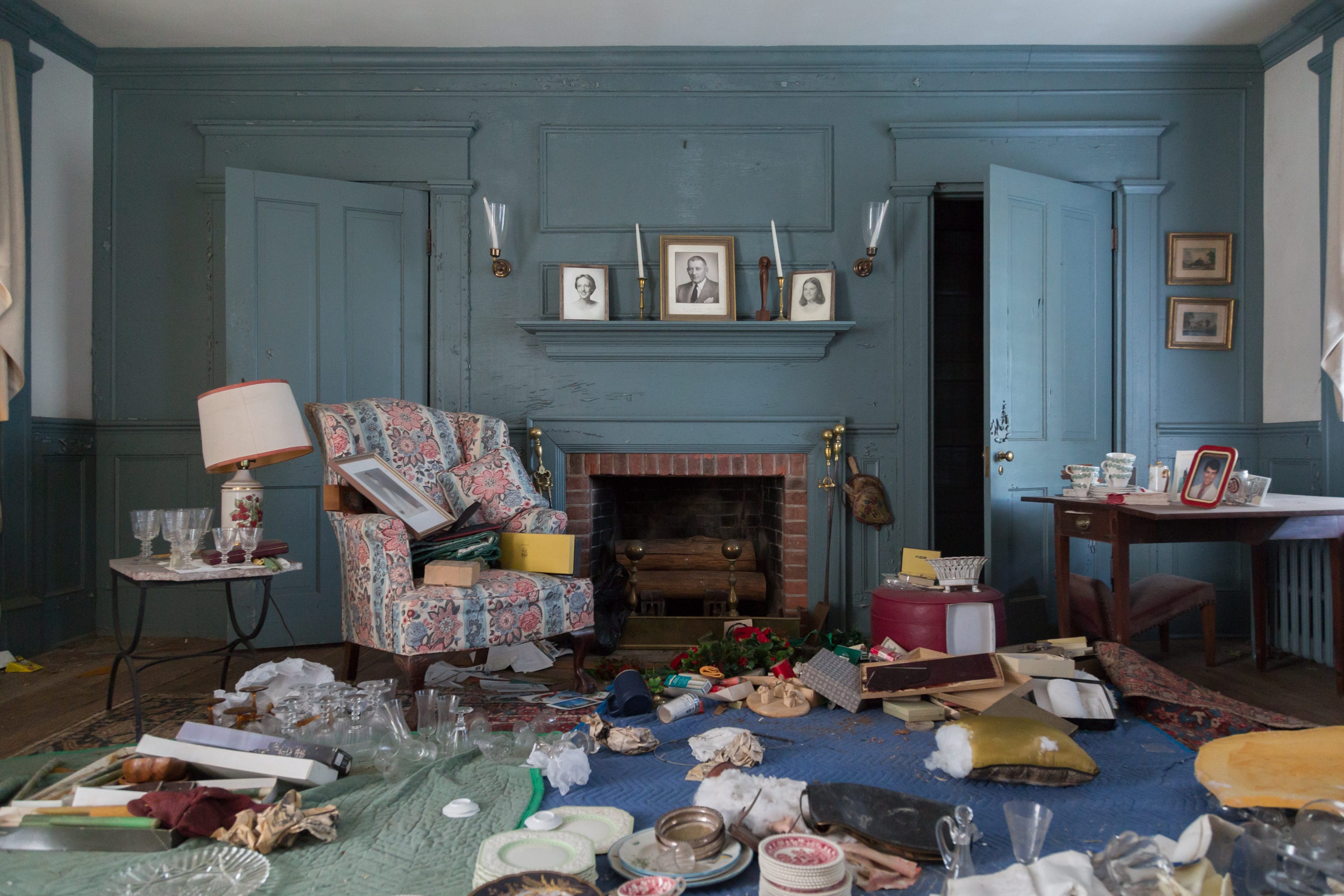 Bryan SansiveroOne of the rooms.

“I realised that I should be documenting all of this history that is being left to sit and decay before it’s gone forever,” he said.