Can you solve these brainteasing Pi Day maths problems? Some celebrate Pi Day by taking advantage of all the stores offering free or discounted pies, pizzas, or other deals. But if you want to partake in Pi Day another way, here are three brainteasing maths problems that involve the irrational number, presented in order from easiest to hardest.

Level One: Find the area of the shaded region 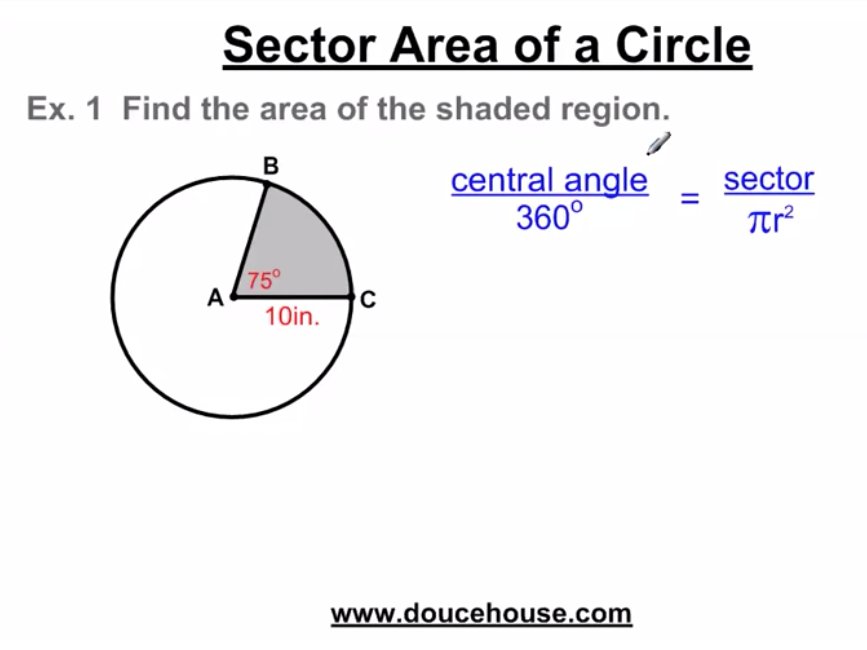 TheDouceHouse/YouTubeCan you find the area of the sector?

The sector of a circle is “part of the area of a circle bound by the central angle and its interpreted arc,” according to YouTube maths whiz TheDouceHouse.

The central angle we’re given is 75 degrees, and the radius is 10. We can plug the numbers into an equation representing that relationship and call the area of the sector “x.”

He recommends simplifying π to 3.14, which results in:

The area of the sector is 65.4 in2.Since this is talking about an area, the unit is squared.

Level Two: Now, can you find the radius of a circle if given the area of the sector? 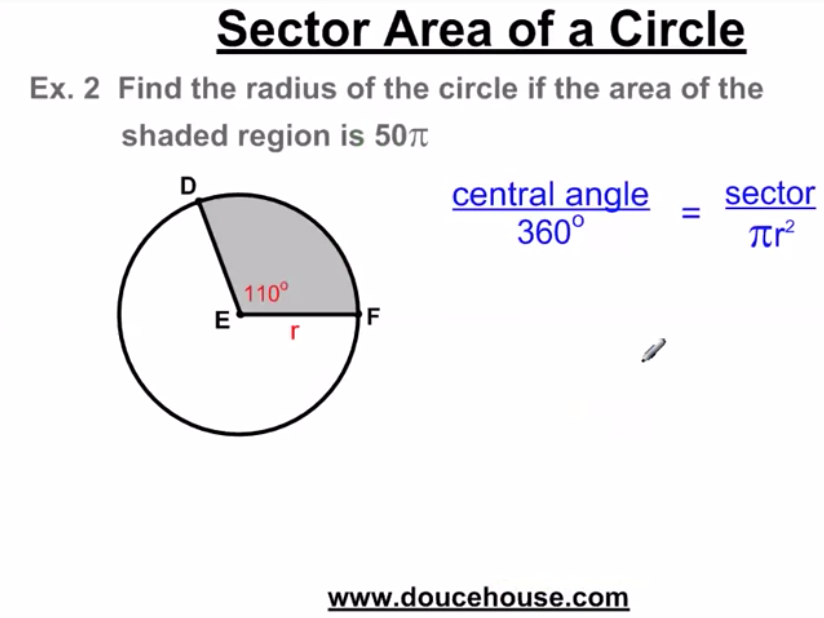 TheDouceHouse/YouTubeCan you find the radius of the circle?

Here, we’re given the area of the sector and the central angle and are missing the radius. Plugging in the numbers, we get:

We can cancel out π on the right side of the equation.

Then, cross multiply and divide both sides by 110.

Now, take the square root of both sides.

You can watch a full explanation of the solutions to both of these problems below.

Level Three: This maths problem about the height of a bottle was in a competition for eighth graders. Can you solve it? 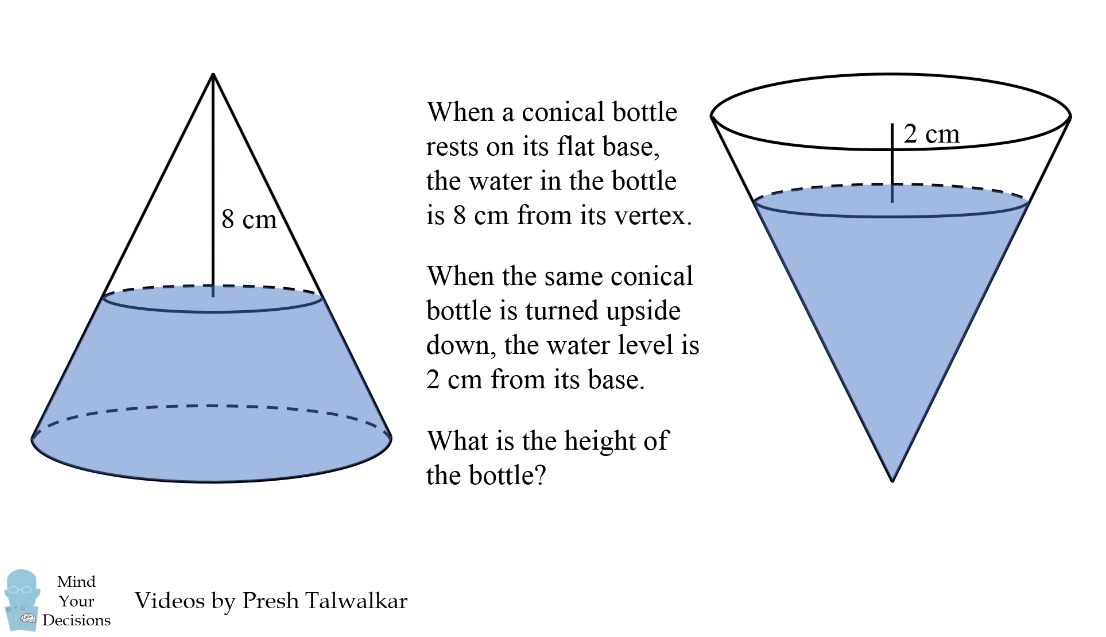 MindYourDecisions/YouTubeHow tall is the bottle?

To solve this problem, Presh Talwalkar of the YouTube channel MindYourDecisions recommends solving for the volume of water (because that is the thing that remains constant) in both cones and then setting them equal to each other.

The volume of a cone with a base of radius R and a height h is πR2h/3.

Working through the formula for the volumes of those two cones, that difference can be expressed as π/3R2(h – 512/h2).

The volume of water in the upside-down cone is the volume of a cone similar to the larger cone with a height of h-2. Plugging that into the volume formula, we get π/3R x (h-2)3/h2.

By setting these equations as equal to each other, the radius cancels out and it’s possible to solve for the value of h. 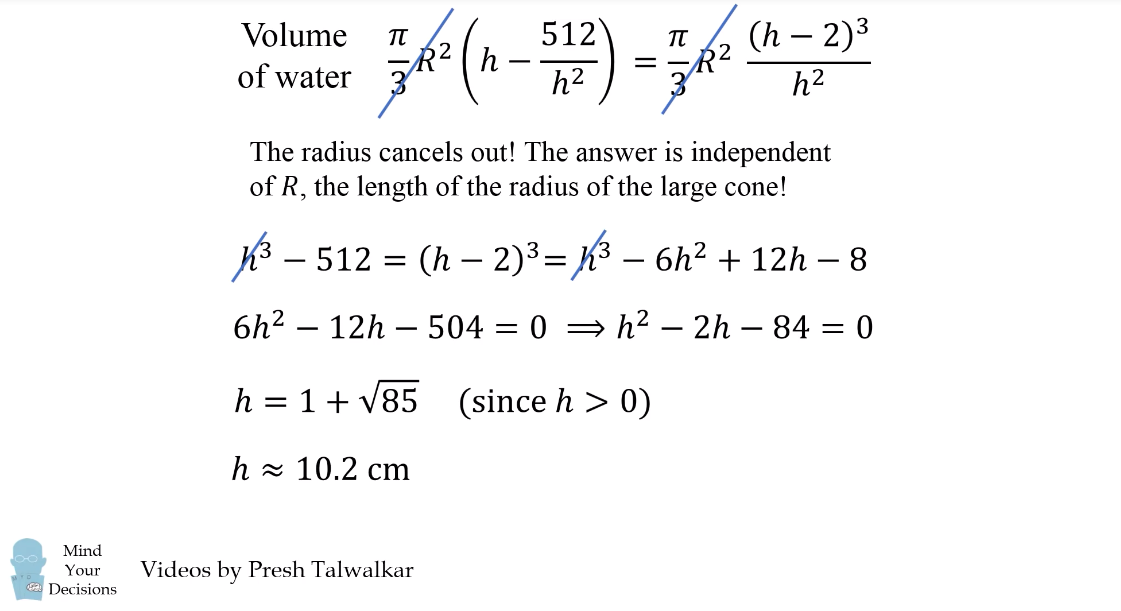 The height of the bottle is approximately 10.2 centimeters.

You can watch a full explanation of the solution below.