REUTERS/Shannon StapletonJambo, a Briard, gets a blow dry in 2018.

Each year in preparation for the Westminster Dog Show, owners spend countless time and money getting their pups up to show standard.

Pat Quigley, the owner of Lajosmegyi Kennel in Washington, told CNBC that the cost of participating in the show, including a professional handler and a year of “campaigning” leading up to the big event, can be more than $US250,000.

Certain dog breeds, like poodles, bichon frises, Afghan hounds, and English sheepdogs require around-the-clock care, as their distinctive coats are an essential part of impressing the judges on their breed standards.

Take a look at the dogs who get pampered to perfection to impress judges and take home a title. REUTERS/Mike SegarA standard poodle is groomed at Westminster in 2017.

In 2020, Siba (not pictured) became the fifth standard poodle to win best in show at Westminster. She took home a trophy and the honour, but Westminster actually doesn’t award any prize money.

Poodles must have one of two specific cuts to compete: the “Continental Clip” or the “English Saddle Clip.”

This miniature version of the breed has a glam squad working behind the scenes. No one wakes up looking perfect, and the miniature poodle is no different. Perhaps the most intensely groomed breed, poodles large and small have to comply with the two show clips.

Dramatic updos are required to keep hair in place. REUTERS/Carlo AllegriLeslie Simis grooms her dog, Sharona, at Westminster in 2013.

According to Pedigree, the name “poodle” comes from the German pudel, which means “water dog.”

The poodle’s unique clip comes from its history as a water dog. Since their thick coats could sink them when wet, they were shorn to help them float, while leaving hair on the back and head to help keep them warm. REUTERS/Shannon StapletonLeo, an Afgan hound at Westminster in 2018.

Often called the “runway models” of the canine world, Afghan hounds are prized for their long, luxurious coats and thin, delicate bodies.

Philip Schafmayer and his Afghan hound, Cardi B, competed at Westminster this year. He told the New York Post, “Her hair products are more expensive than mine, and I’m real high-maintenance.” He added, “she knows she’s beautiful.”

Henry the golden retriever seems to be enjoying a brush and blow dry. REUTERS/Carlo AllegriHenry, a golden retriever, at Westminster in 2013.

In Westminster’s 144 years, a golden retriever has never won best in show, even though the dogs are consistently in the top three of America’s most beloved breeds.

Goldens have two-part coats: a long and smooth outer coat, and a soft and fuzzy undercoat. They require regular brushing to keep them looking smooth.

Donald the bichon frise is a picture-perfect fluffball. 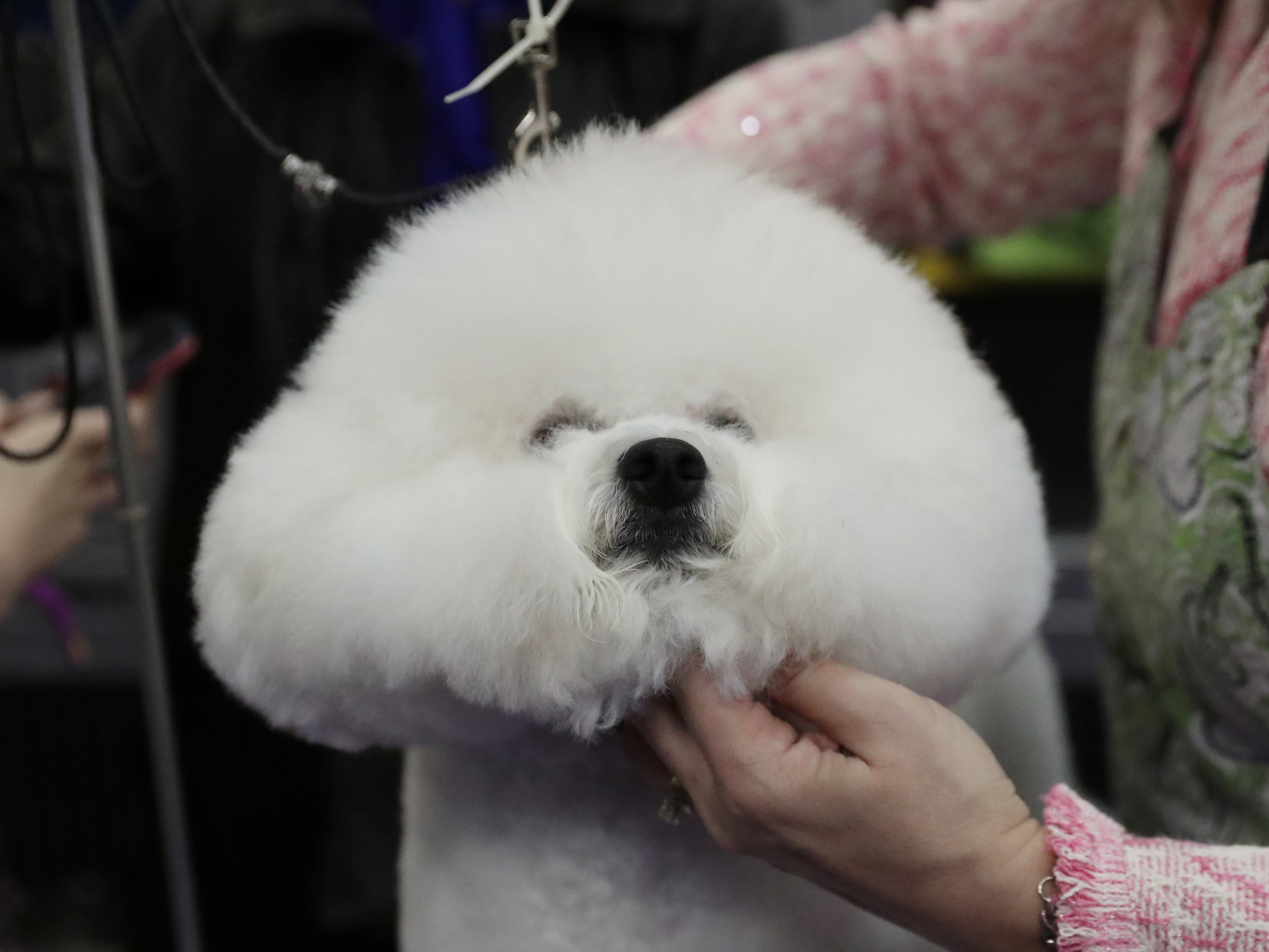 A bichon frise named Flynn was 2018’s best in show. The breed is known for its cloud-like white coat. They require professional grooming to keep their fur with the ideal level of fluffiness. 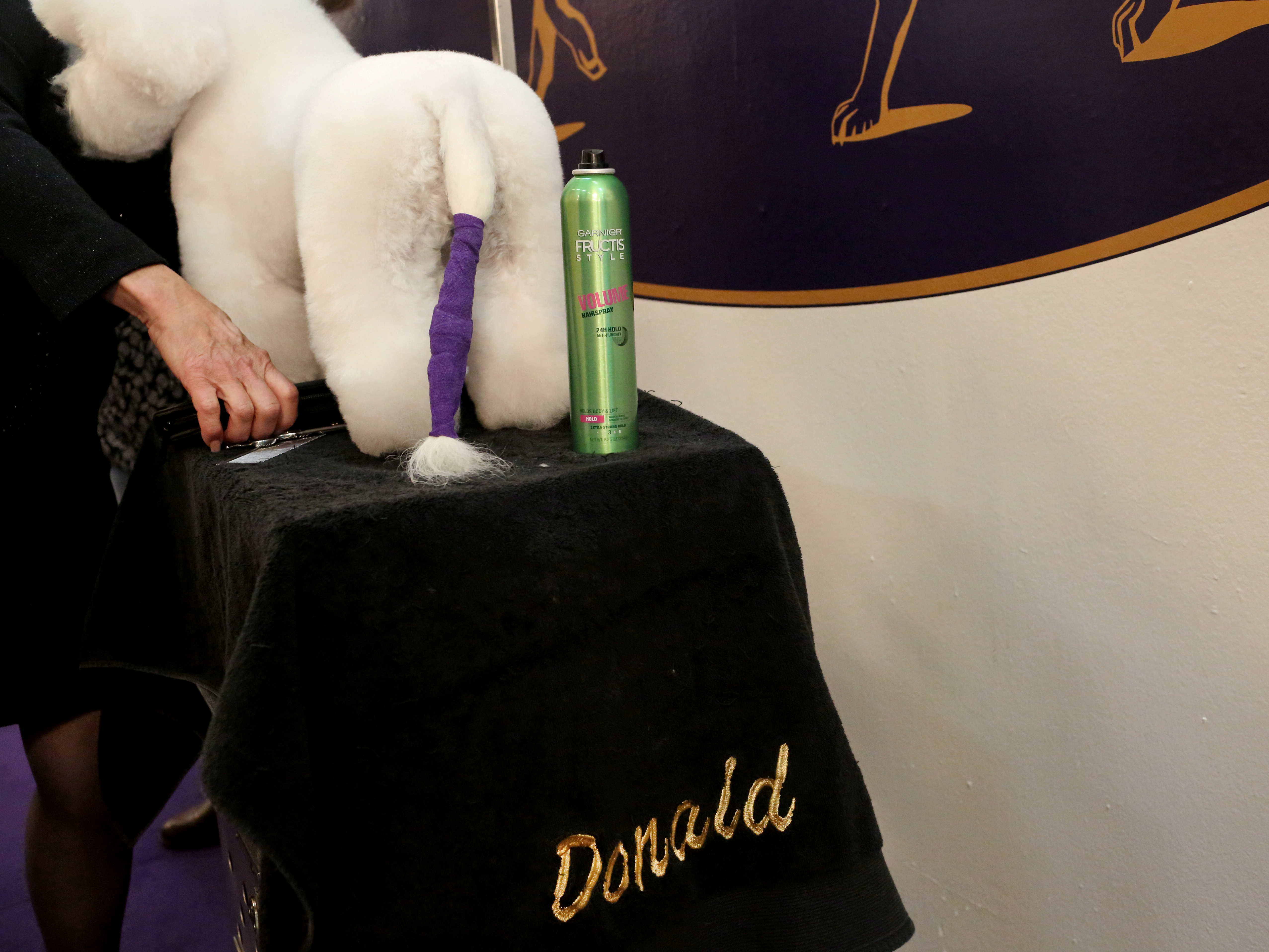 REUTERS/Yana PaskovaA bichon frise is groomed on the first day of the show.

Bichon frises are typically groomed in what’s called a “lion style” in which the fur around the face is left to grow out like a lion’s mane and the tail has a ball of fur at the end.

Jambo the Briard is pampered to perfection, and he seems to enjoy the attention. REUTERS/Shannon StapletonJambo, a Briard, gets a blow dry in 2018.

The British Briard Club describes the ideal texture for their coat to be like a “goat’s coat” with a somewhat coarse texture but an overall smooth appearance.

And Saxon the collie appears calm and collected as his owners primp his fur. The only collie to have ever won best in show was Laund Loyalty of Bellhaven. He took home the title in 1929.

Collies have long, thick coats and require long baths and blow drys to get ready for Westminster. Keeping an English sheepdog show-ready is a full-time job, with their large stature, long coat, and white fur.

Clifford Steele, an English sheepdog handler, told the New York Post, “All four feet are white, so just keeping those white is a job unto itself.”

… while Couvee the Keeshond looks like she’s ready to be done with her beauty routine. 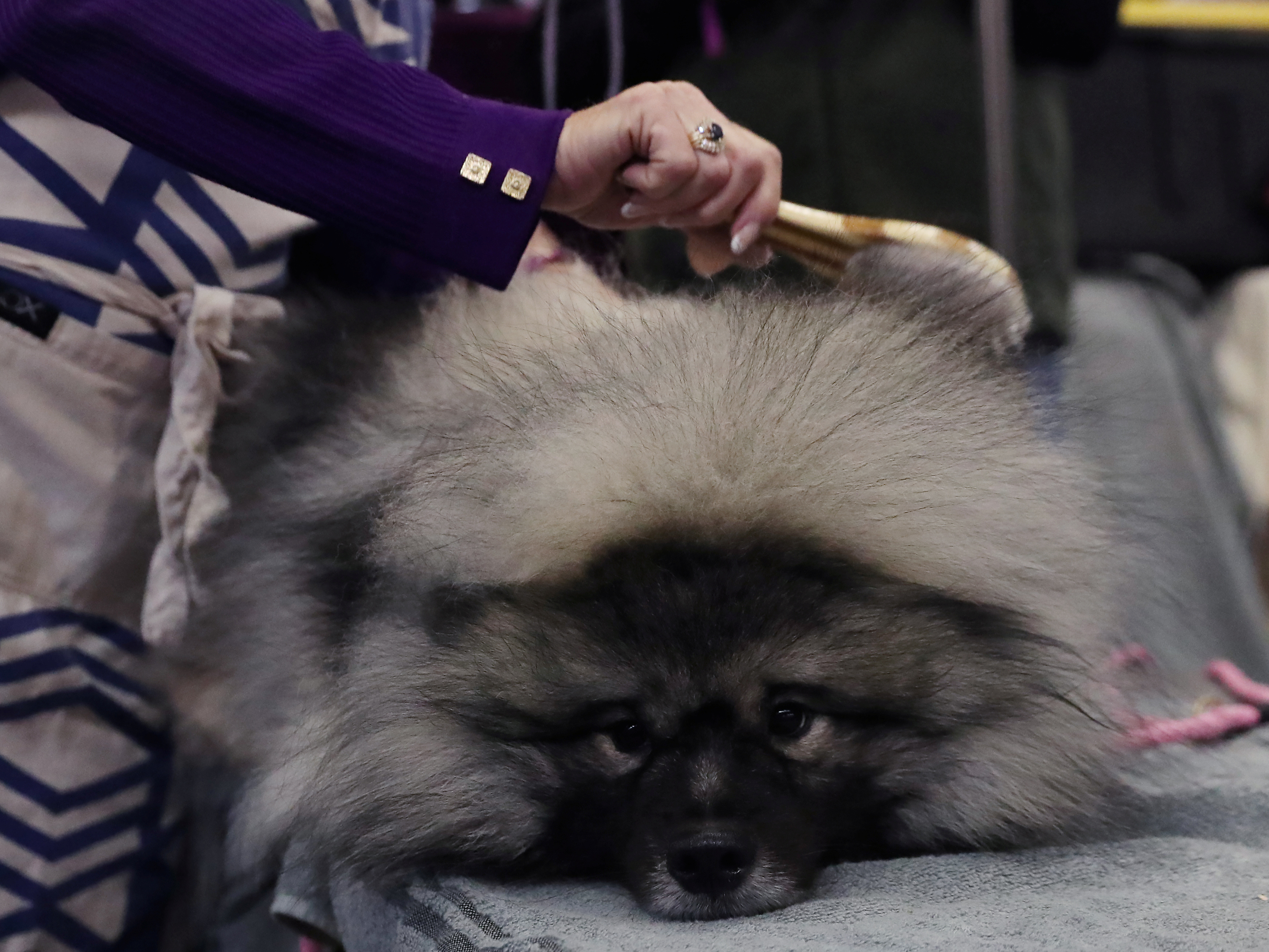 REUTERS/Shannon StapletonCouvee, a Keeshond, on February 11, 2019.

The Westminster Kennel Club describes the Keeshond as “a handsome, medium-sized dog with a luxurious silver-grey and black coat, dramatic markings, elegant carriage, and a richly plumed tail carried over its back.”

Some dogs prefer to relax while getting pampered, like this Shetland sheepdog. Shetland sheepdogs, also called Shelties, are very similar in appearance to their larger cousin, the collie.

Small, agile herding dogs, they have large two-layer coats, with a thick undercoat. They typically stand between 13 and 16 inches tall.

English bulldogs need their whiskers shaved when competing at Westminster. 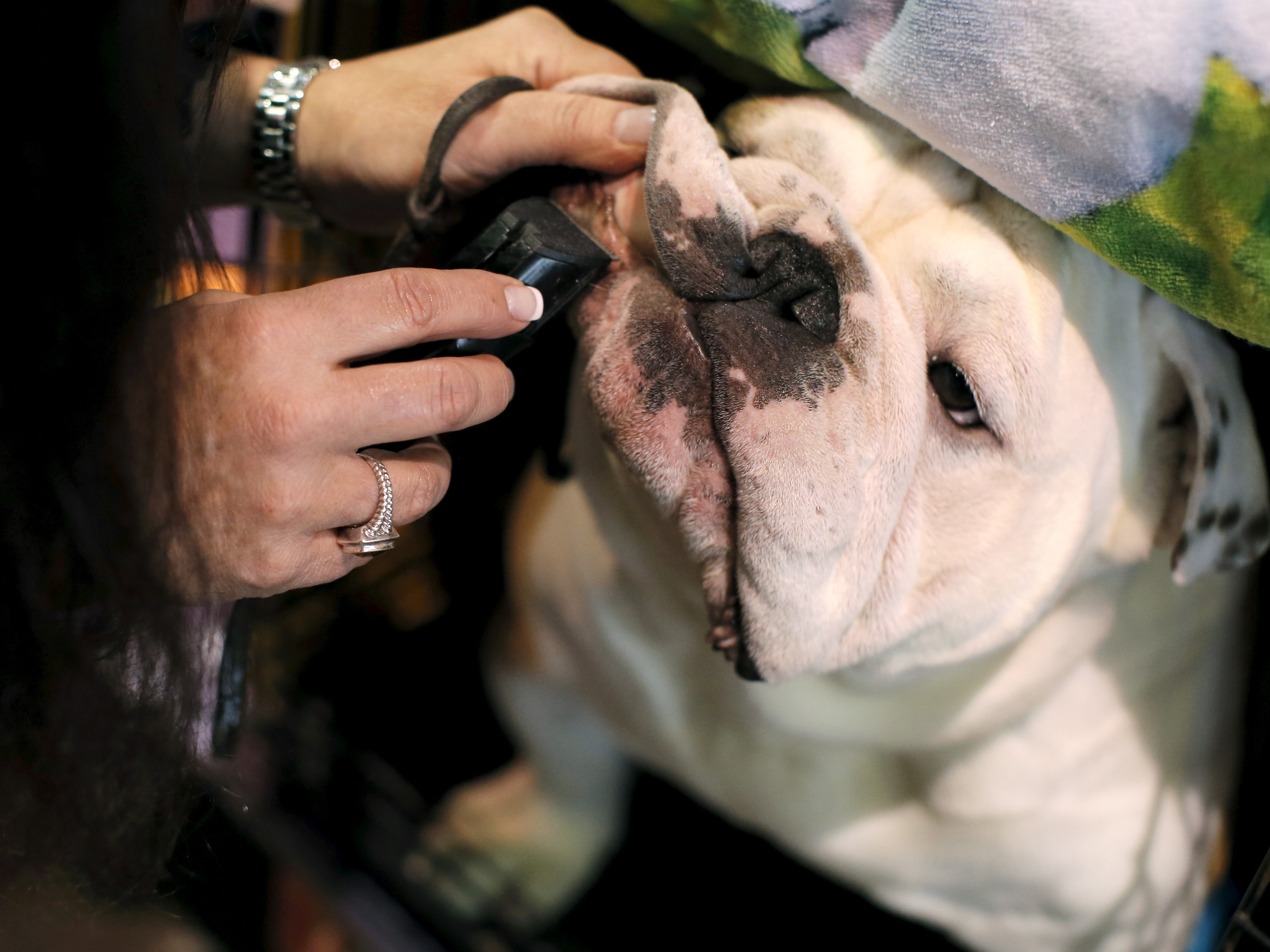 The American Kennel Club describes English bulldogs as “kind but courageous, friendly but dignified, [they are] a thick-set, low-slung, well-muscled bruiser whose ‘sourmug’ face is the universal symbol of courage and tenacity.”

Aj the beagle gets a last-minute neck shave before hitting the main stage. REUTERS/Shannon StapletonAj, a beagle, at Westminster in 2018.

Beagles were bred as hunting dogs and are known to be fiercely loyal. A beagle, Uno, won best in show for the first time in 2008.

Though their coats are shorter than other dogs’, they are known to shed quite a bit, so regular grooming is necessary to keep them show-ready.

This Cesky terrier looks to be sporting some fashionable bangs. 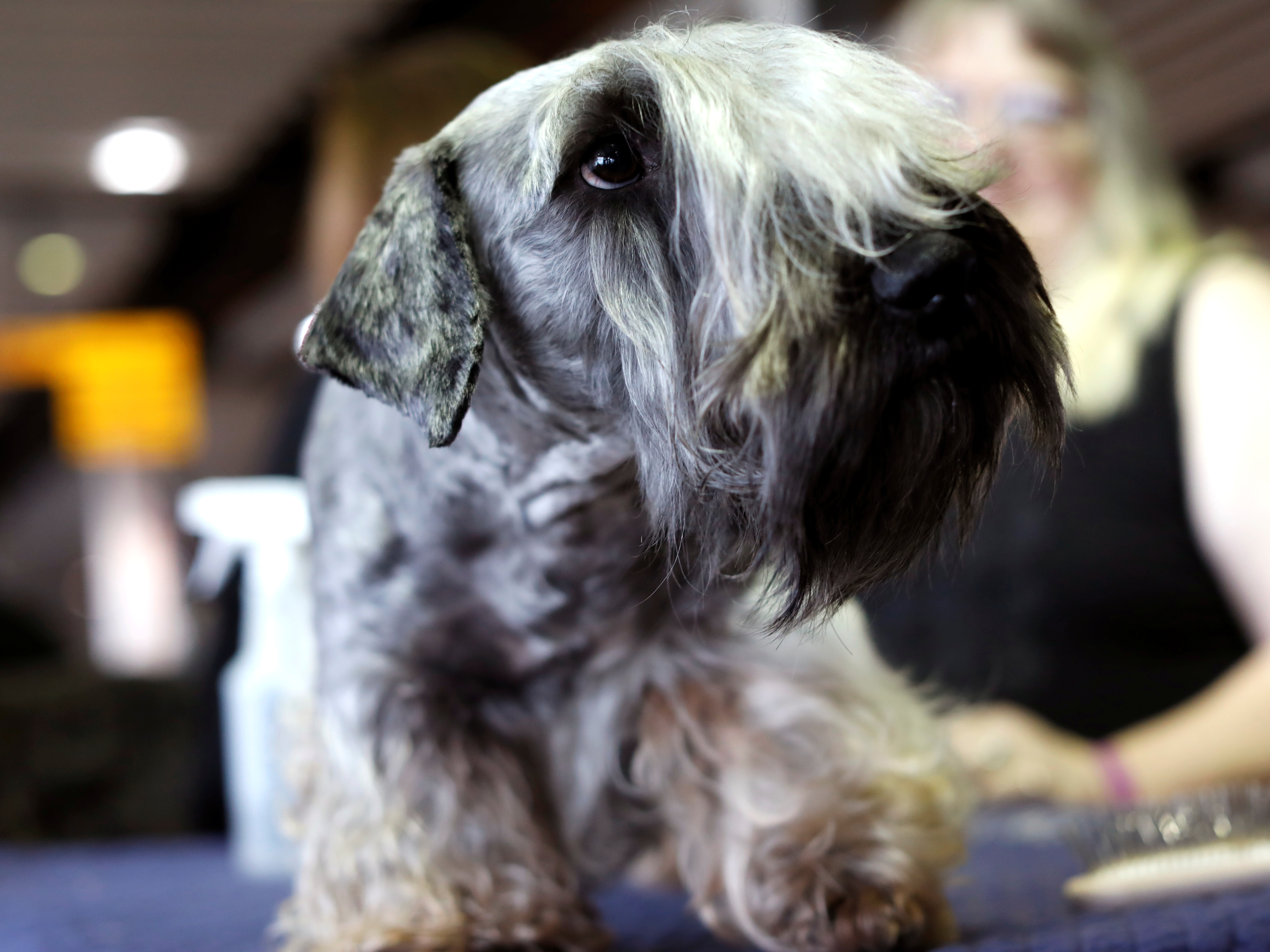 REUTERS/Mike SegarBo, a Ceksy terrier, is groomed ahead of judging.

The Cesky terrier is the national dog of the Czech Republic. They are rare in America, with a population of about 600.

They are short-legged, muscular dogs with coats that come in a range of grey colours. They also have soft, wavy hair, as seen on Bo above.

Jasper the Shih Tzu wears his hair up with a turquoise bow. 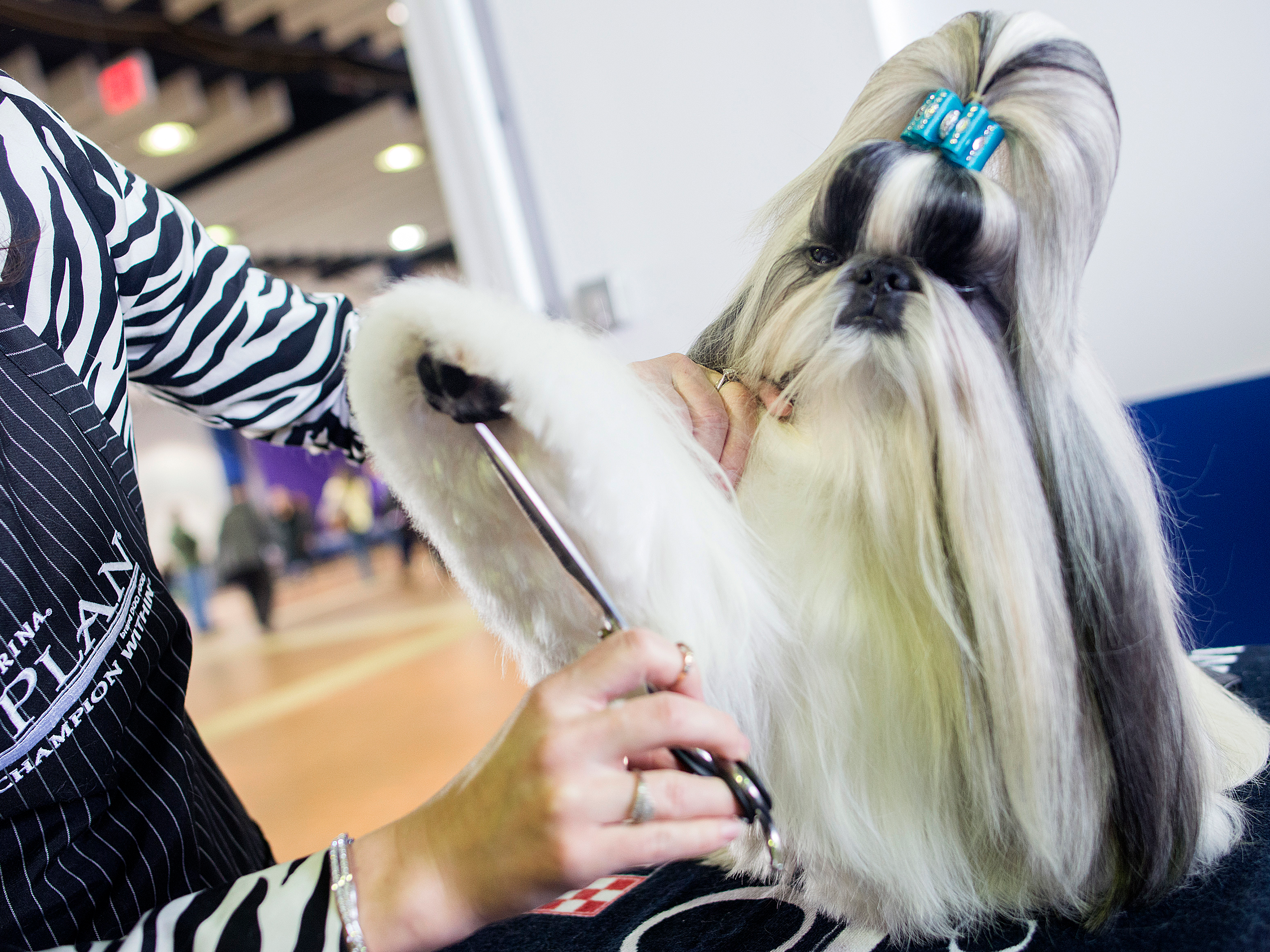 Shih Tzus are known for their long, dramatic coats that flow long below their short bodies.

Though many owners outside the show rings give their dogs a shorter haircut for easier grooming, Westminster requires the dogs have long, flowing hair for the ring.

Penny the lhasa Apso has her hair in pigtails to keep it in the right position for the ring. 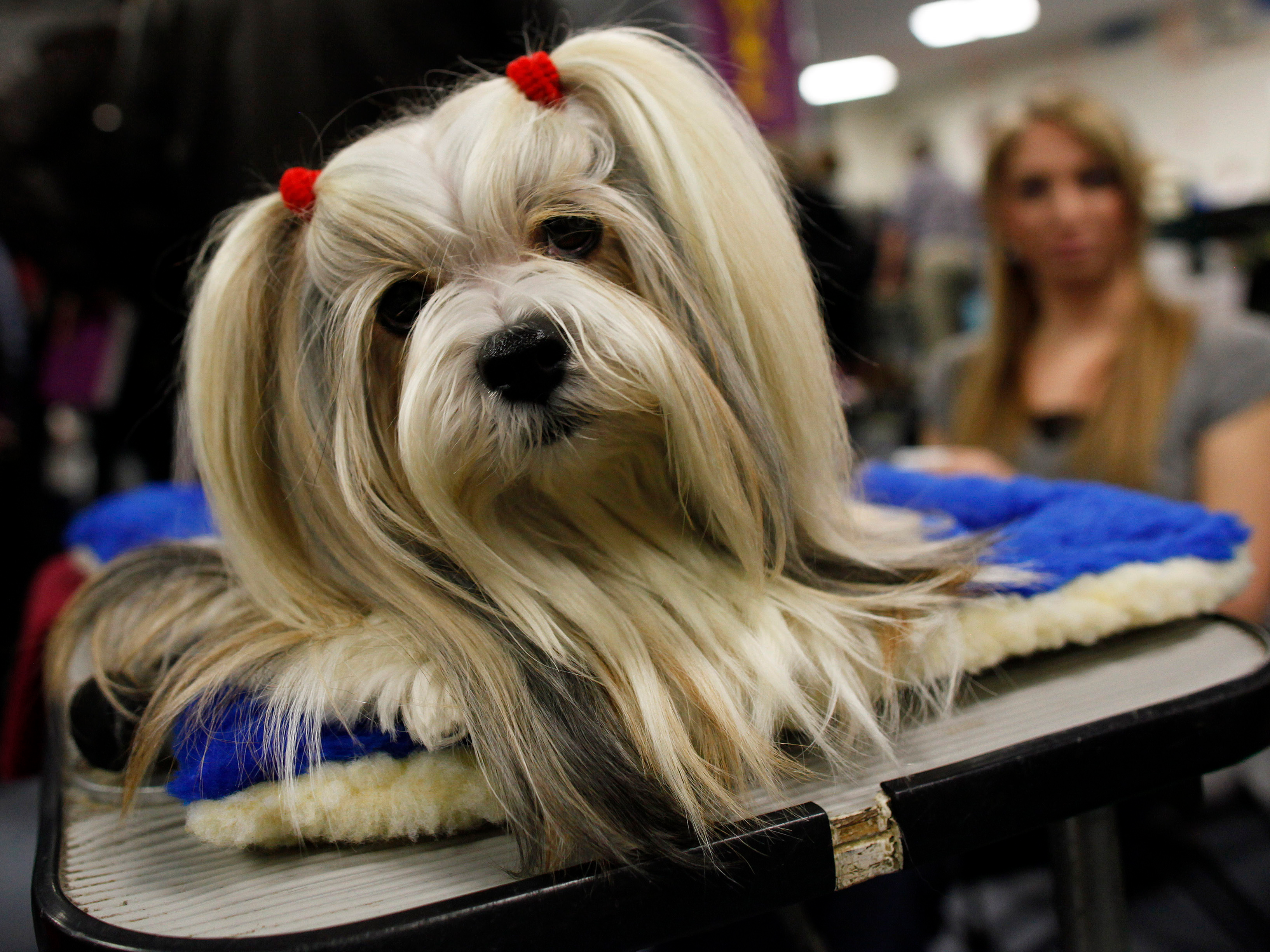 REUTERS/Shannon StapletonPenny, an lhasa Apso, in 2011.

Lhasa Apsos are a Tibetan breed and are known for their straight, floor-length coats with hair that often partially covers their eyes and face.

The Lhasa Apso is a thousand-year-old breed, and they served as sentinels at palaces and monasteries in the Himalayas.

This group of Yorkshire terriers is having a grooming party. Petite Yorkshire terriers are known for their fine hair. Since their hair is so similar to human hair, it tangles in the same way and requires daily brushing, but on the plus side, they only shed as much as humans do.

Most owners keep their Yorkies with a short puppy cut, rather than the long, flowing hair required for the show ring.

This Pomeranian gets an upside down nail trim. REUTERS/Lucas JacksonA Pomeranian gets its nails trimmed in 2013.

The tiny Pomeranian is a popular dog breed for its thick fluffy coat and cute fox-like face.

Their large double-coat comes in about 24 different shades and requires extensive care to get show-ready.

These English toy spaniels have their ears wrapped. These English toy spaniels have their ears wrapped to keep their long and silky ear hair in perfect position.

Getting an ear blow-dry is a regular part of a cocker spaniel’s grooming routine. The dog’s characteristic fluffy ears require a high level of care and owners must be careful to avoid infection.

After all is said and done, we can only imagine the fur clean-up after every Westminster Dog Show. REUTERS/Yana PaskovaDog fur falls to the ground in the preparation area.

Though most attention is paid to the pampered pups attending Westminster each year, we can’t imagine what the clean-up crews have to go through to get rid of all that fur.