PHOTOS: Trump's Tulsa rally saw low turnout, groups of protesters, not much social distancing, and the return of the Baby Trump balloon President Donald Trump held a political rally Saturday evening in Tulsa, Oklahoma, his first event since the coronavirus pandemic largely shut down the US in March.

The Trump campaign was expecting a large turnout, preparing an overflow area outside the BOK Centre, which has the capacity to hold more than 19,000 people. But the Tulsa Fire Department ultimately estimated that just under 6,200 people attended the event.

The Trump campaign had said it received over 1 million requests for tickets, which did not guarantee entry. Groups of TikTok users and K-Pop fans sought to take at least some credit for that, saying they reserved tickets without the intention of attending. The overflow area ultimately went unused.

Trump’s 2020 communications director, Tim Murtaugh, and his 2020 campaign manager, Brad Parscale, blamed protesters and the media for the turnout, though reporters at the event disputed that protesters kept people from attending. After the event, Murtaugh released a statement saying the event drew a large online viewership.

“President Trump’s rally in Tulsa attracted over 4 million unique viewers across all of the campaign’s digital media channels,”Murtaugh said in a statement. “The livestreamed pre-rally shows drew an audience of more than 2.5 million unique viewers by themselves. These numbers don’t even include television viewers.”

But a lower-than-expected turnout isn’t the only thing the event saw. There were also scores of protesters and the return of the famous Baby Trump balloon.

Here are photos of what the event looked like.

On Saturday, President Donald Trump held his first political rally since the US largely shut down in March because of the coronavirus pandemic. 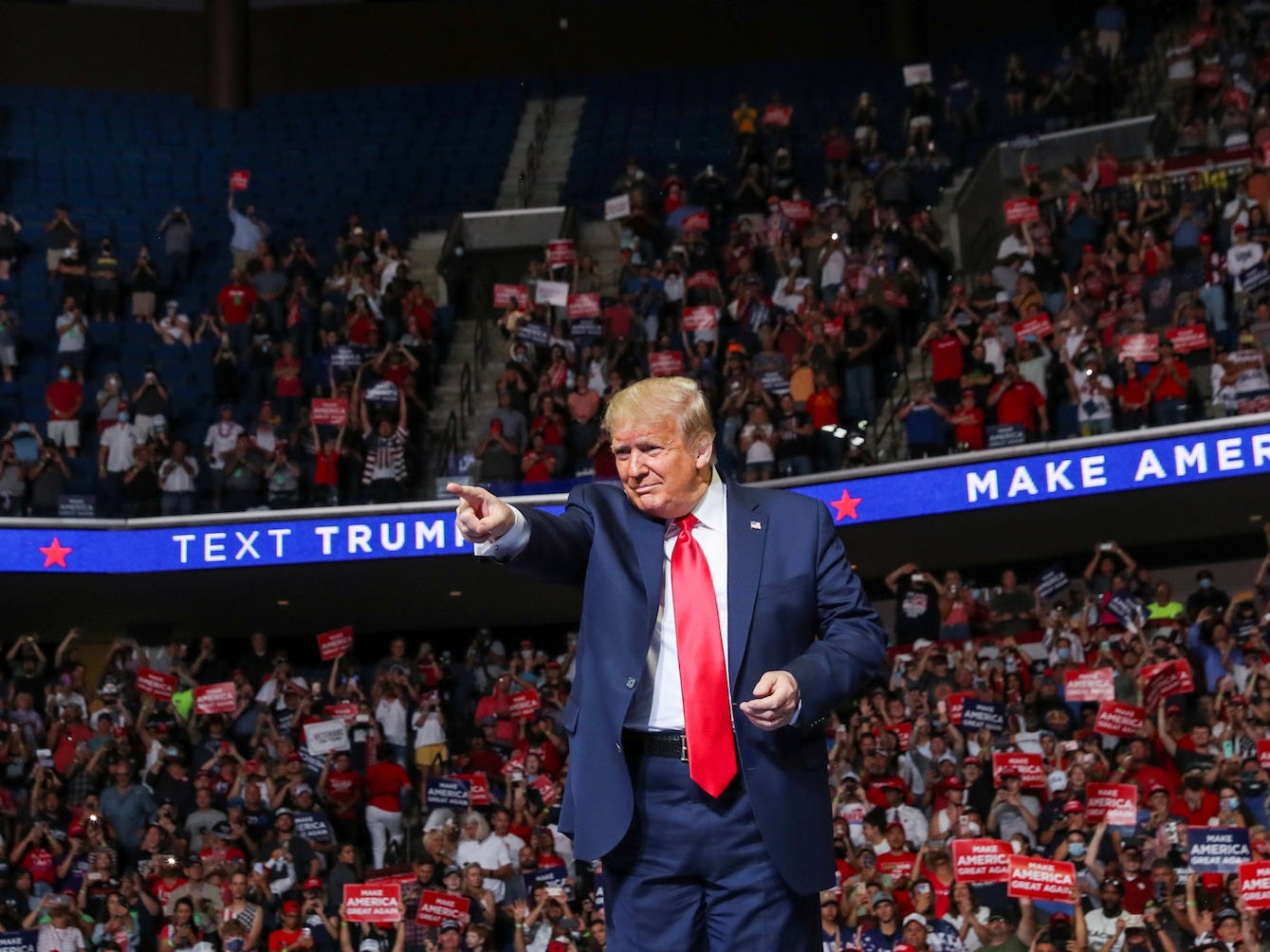 Leah Millis/ReutersTrump entering the BOK Centre in Tulsa, Oklahoma, on Saturday night for his rally.

The event was held in Tulsa, Oklahoma, and was initially scheduled to be held Friday – the same day as the holiday known as Juneteenth, which celebrates the end of slavery in the US.

“We had previously scheduled our #MAGA Rally in Tulsa, Oklahoma, for June 19th – a big deal. Unfortunately, however, this would fall on the Juneteenth Holiday,” Trump tweeted.

He added that “many African American friends and supporters have reached out to suggest that we consider changing the date” and that he “therefore decided to move our rally to Saturday, June 20th, in order to honour their requests.”

Criticism of Trump’s original date was exacerbated by the location: Tulsa was the site of 1921 violence in which a white mob target Black Americans and burned down a neighbourhood known as Black Wall Street, killing as many as 300 Black people. 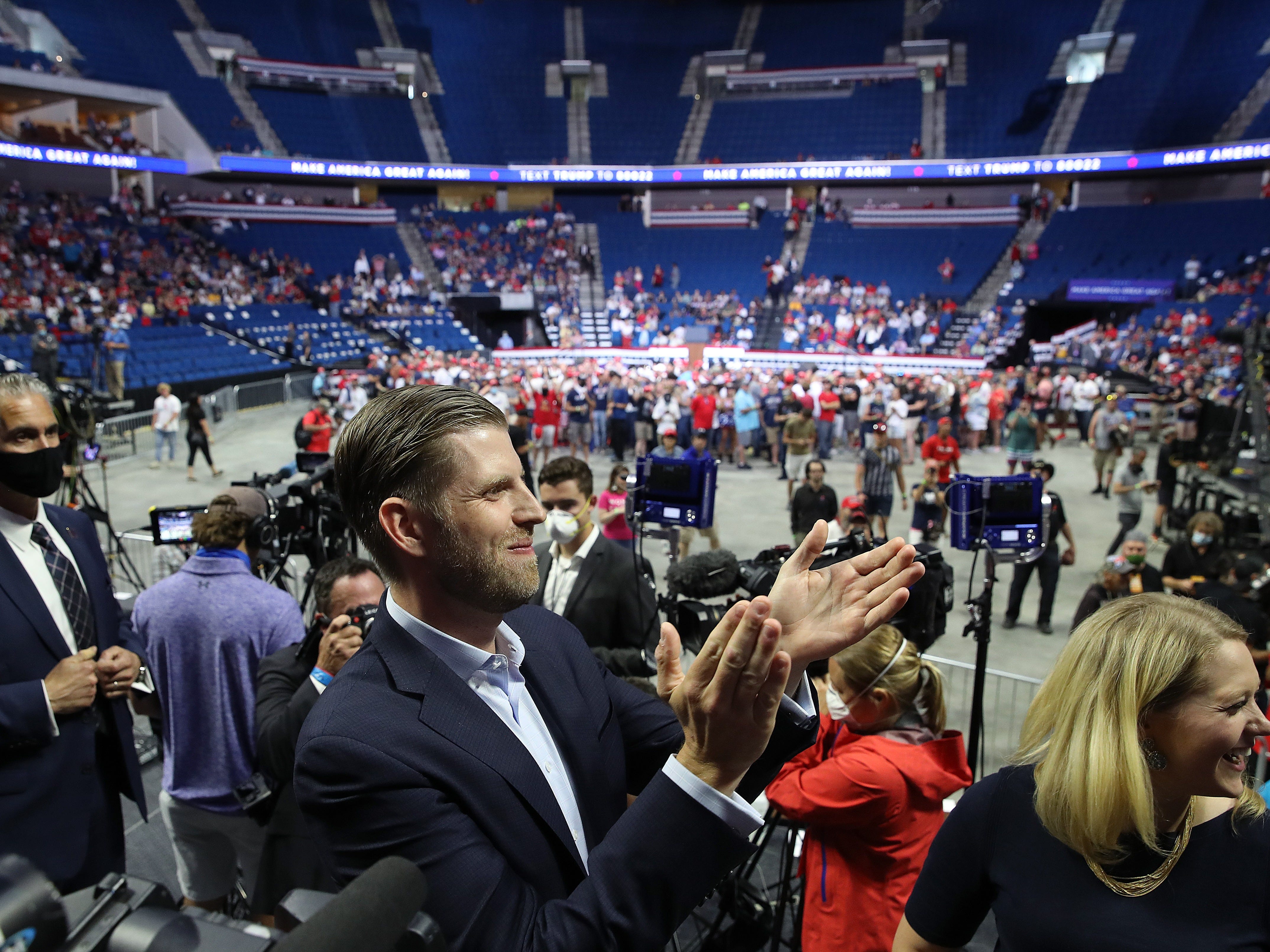 People had camped out in Tulsa for the rally the day before it was set to be held. 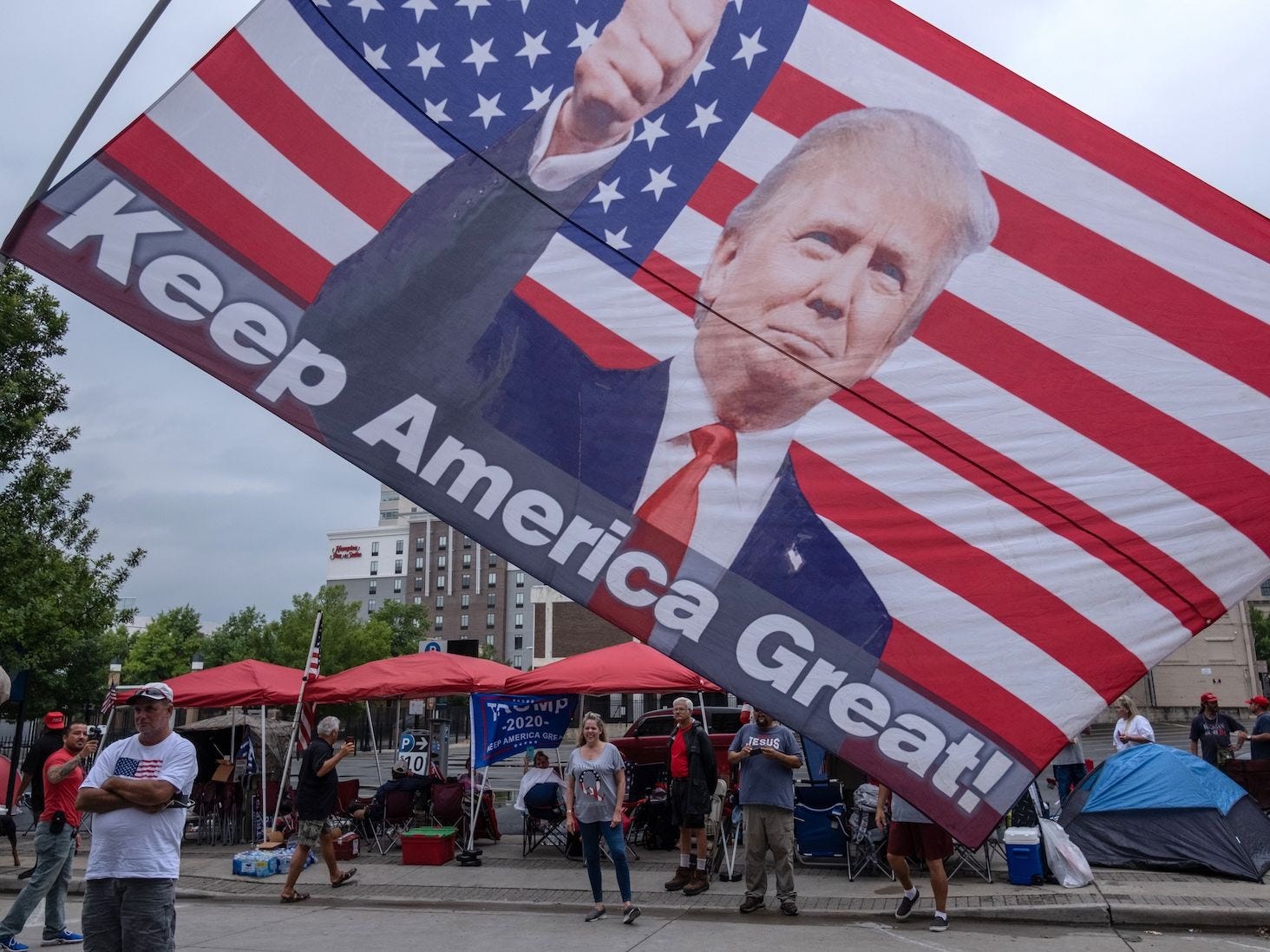 Seth Herald/AFP via Getty ImagesTrump supporters camped near the BOK Centre on Friday.

The rally was hosted at the BOK Centre, which has the capacity to hold more than 19,000 people. Trump’s campaign expected a full house with tens of thousands more people in an overflow area outside the arena, though local officials estimated that only about 6,200 people showed up. 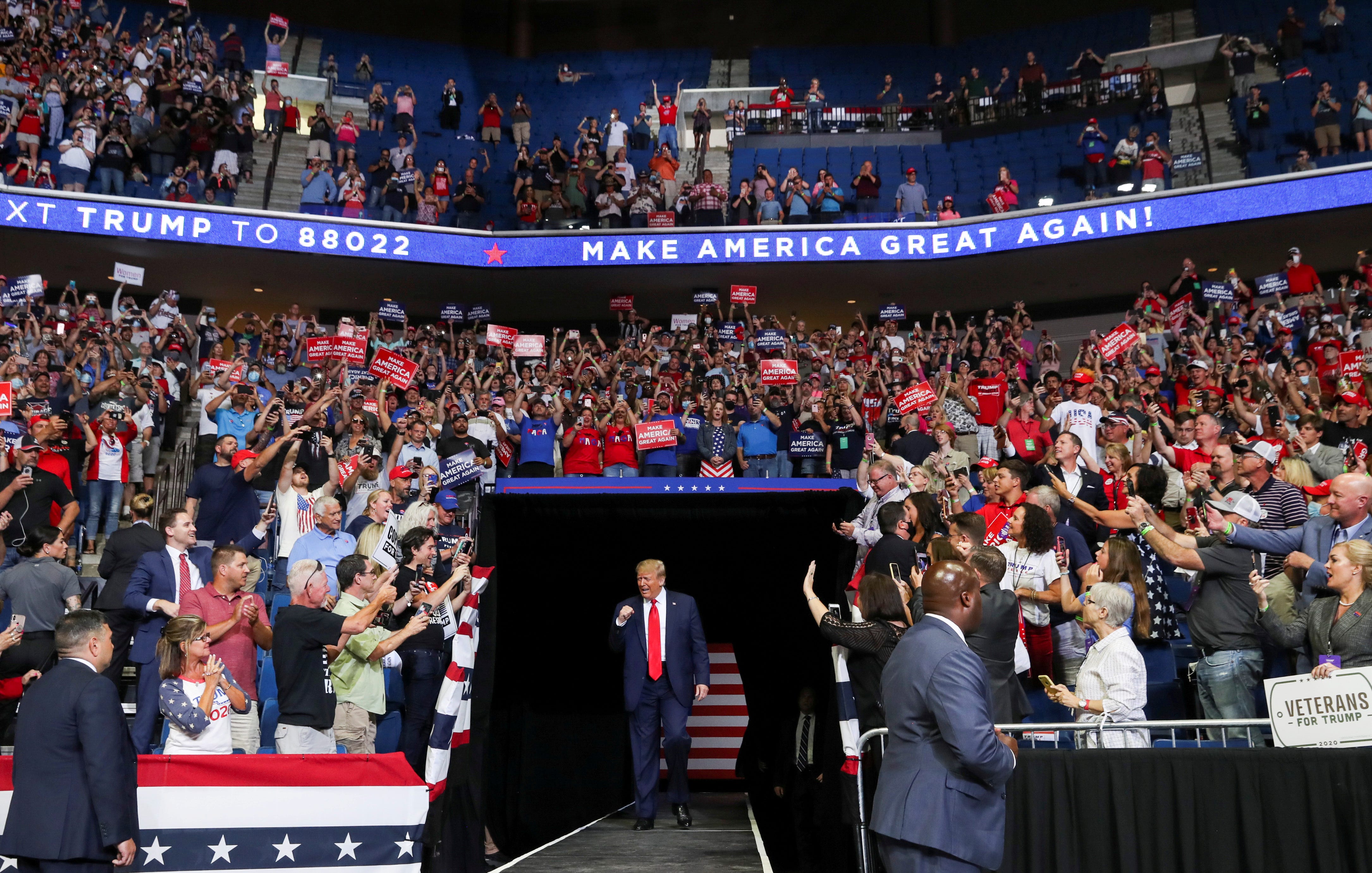 REUTERS/Leah MillisTrump at the BOK Centre in Tulsa.

A standout moment from the event is when Trump addressed recent health concerns.

Trump is reenacting walking down the West Point ramp. pic.twitter.com/46TgmwgkRD

Trump addressed the scepticism circulating over the state of his physical and mental health.

Concerns arose last week after a video showed him cautiously walking down a ramp after an event at West Point, where he was speaking with the graduating students.

At the rally, Trump told his audience that the ramp was slippery “like an ice skating rink” because of the shoes he was wearing and that he had no handrails to grip.

The Trump campaign had said it received over 1 million ticket requests before the event. At least part of that appeared to be the work of TikTok users and K-Pop fans, who led a social-media campaign encouraging people to reserve tickets without planning to attend. 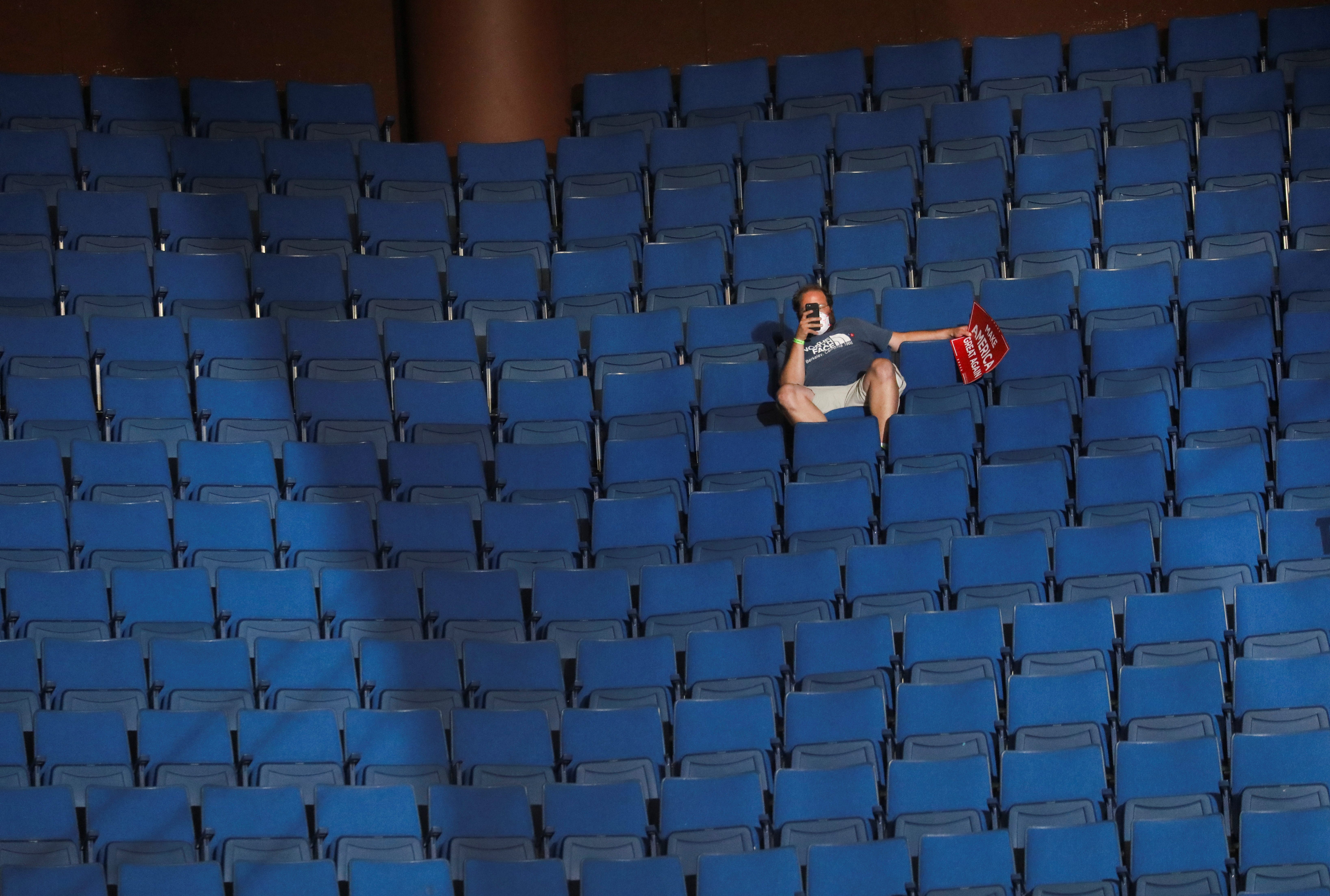 “President Trump’s rally in Tulsa attracted over 4 million unique viewers across all of the campaign’s digital media channels,”Murtaugh said in a statement. “The livestreamed pre-rally shows drew an audience of more than 2.5 million unique viewers by themselves. These numbers don’t even include television viewers.”

Outside the rally, hundreds of protesters marched against Trump. 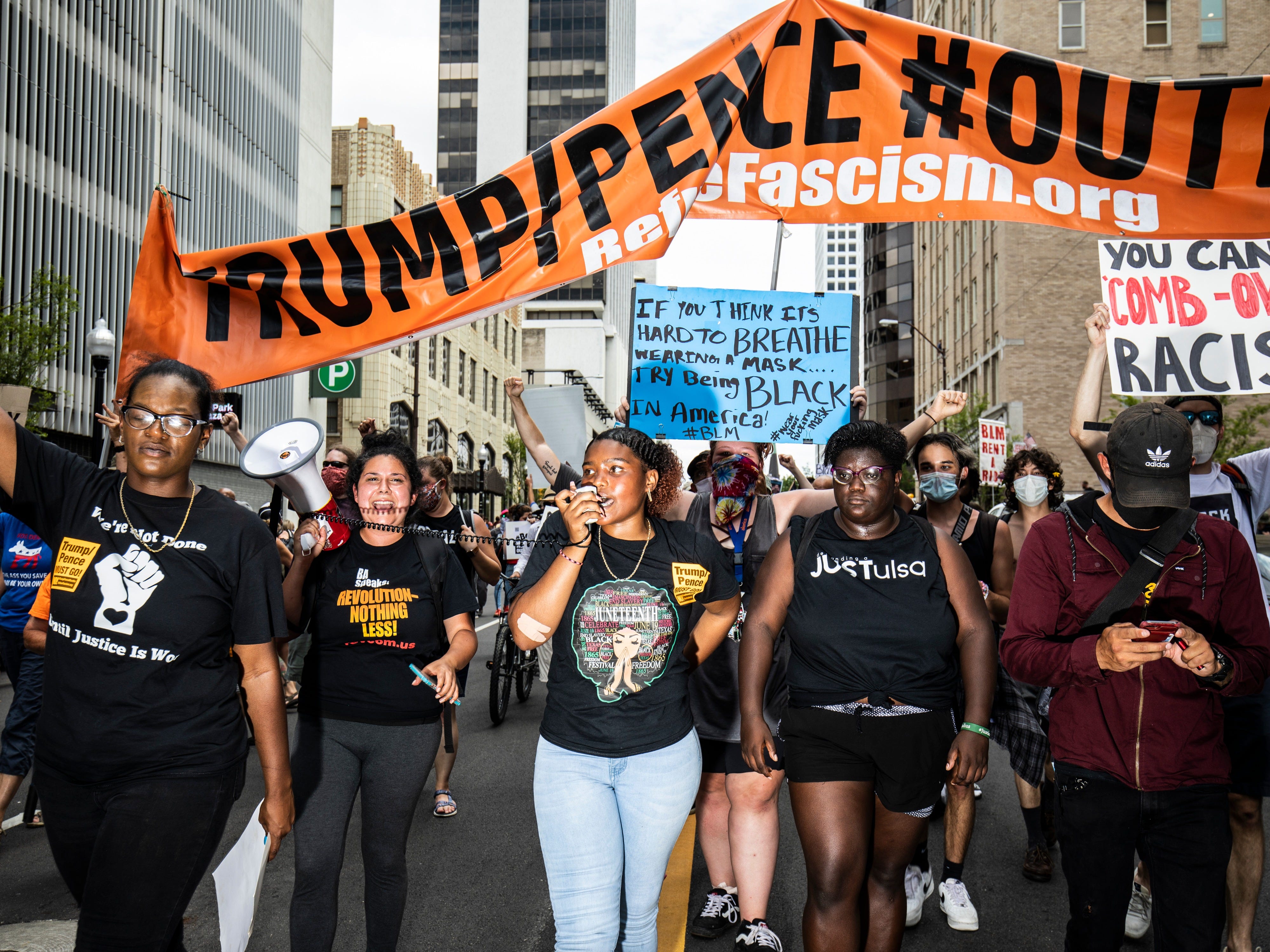 Protesters were seen outside the rally, with the Los Angeles Times reporting that hundreds of Black Lives Matter protesters began marching near the BOK Centre after the rally ended.

The protests were mostly peaceful, though a few clashes did break out, the publication reported.

The famous Trump Baby balloon also made an appearance. Brett Deering / Contributor / Getty ImagesPeople posed in front of the Baby Trump balloon near downtown before Trump’s campaign rally on Saturday in Tulsa.

The Baby Trump balloon has been spotted at numerous events, notably in London in July 2018 as Trump made an official visit to the UK.

Trump referred to those protesting outside his rally as “thugs.” 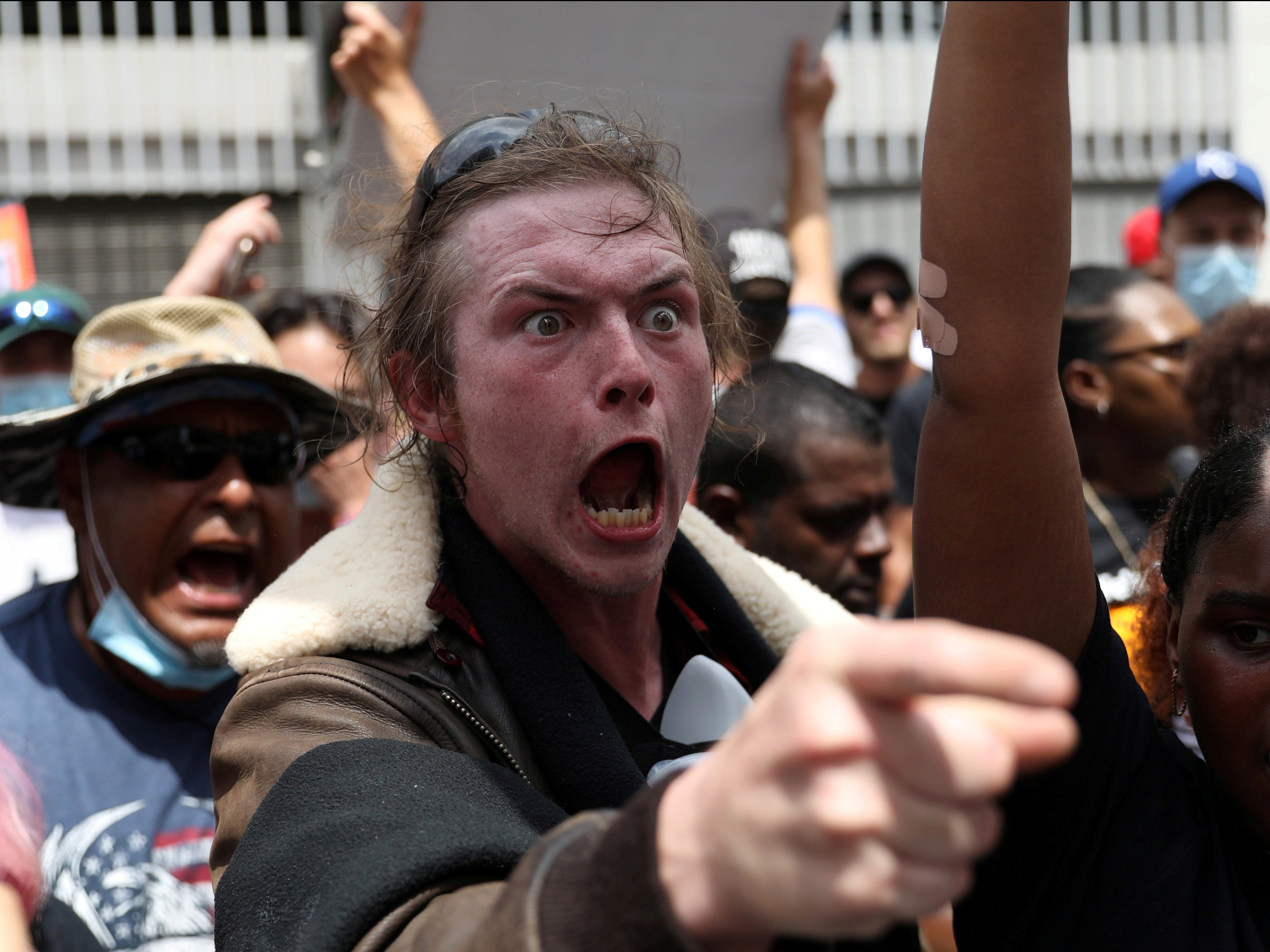 Trump said the protesters (and the media) were scaring people away and referred to those protesting outside his rally as “thugs.”

Murtaugh and Parscale blamed protesters, as well as the news media, for the lower-than-expected turnout.

Parscale even said that at one point protesters had blocked the metal detectors, preventing people from entering the venue; however, the Los Angeles Times reported that though the police did say the entrance was blocked, it was only for a brief moment and nobody was denied entry.

Trump held the rally amid the ongoing coronavirus threat. Tulsa County saw a 100% increase during the week leading up to his rally. Tulsa saw a 100% spike in cases the week leading up to Trump’s rally, according to NBC News. Shortly before the event, news emerged that six Trump staffers tested positive for the virus.

At the rally, Trump said he ordered a slowdown of coronavirus testing, calling it a “double-edged sword” because more testing could cause more cases to be recorded. According to Murtaugh, attendees were given temperature checks before going through security and were given wristbands, face masks, and hand sanitizer. 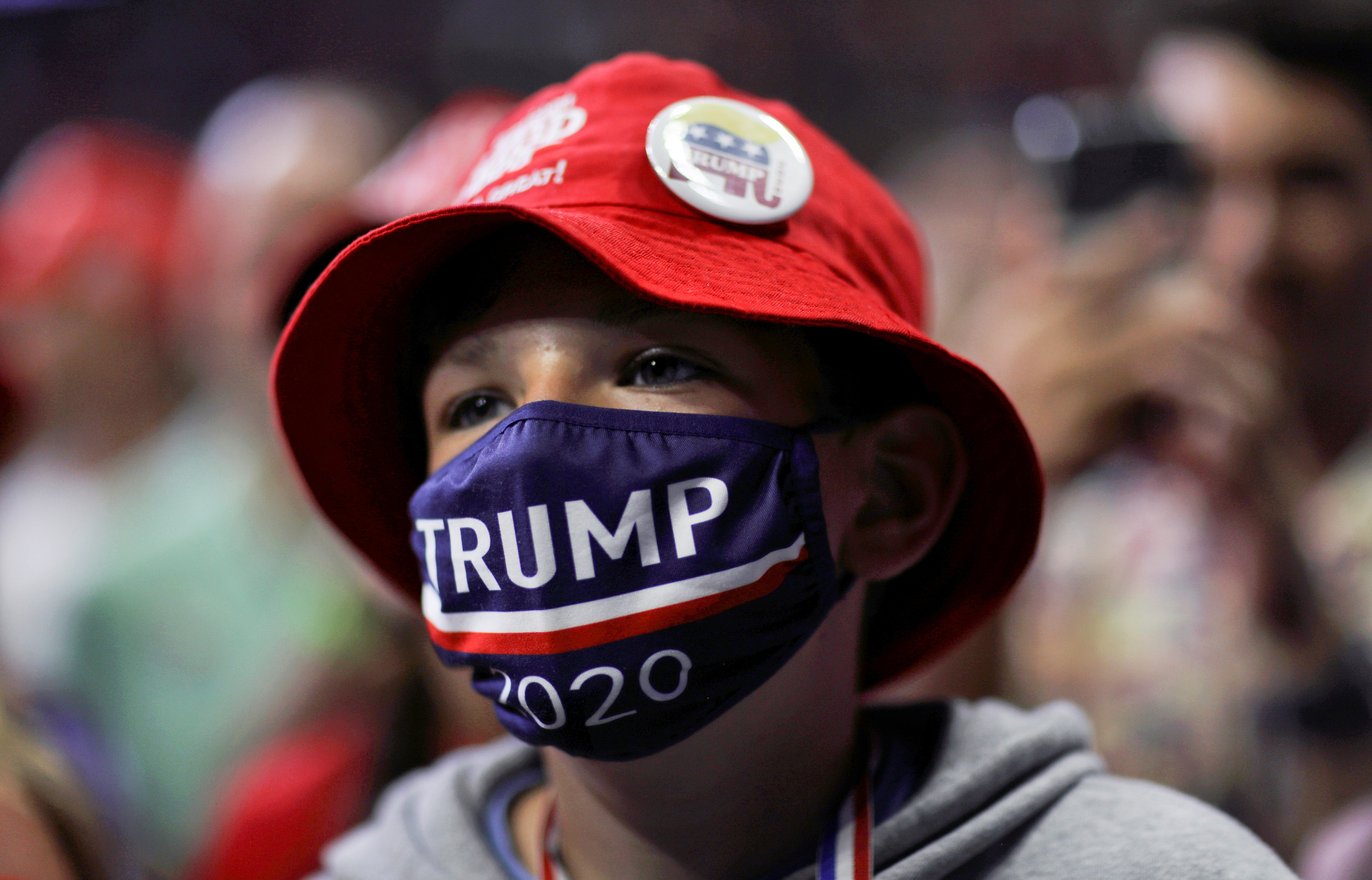 Ahead of the rally, the Oklahoma Supreme Court unanimously rejected a bid to require attendees of Trump’s Saturday rally to wear masks and practice social distancing.

The ruling follows warnings from health experts who fear the rally at the BOK Centre could be a so-called super-spreader event for the coronavirus.

As reported by NBC News, the campaign required those who attended the rally to sign a digital waiver saying the campaign and president were not liable if they got sick.

Few in Trump’s audience, however, wore masks or other forms of protective gear. There also wasn’t much social distancing at the event. 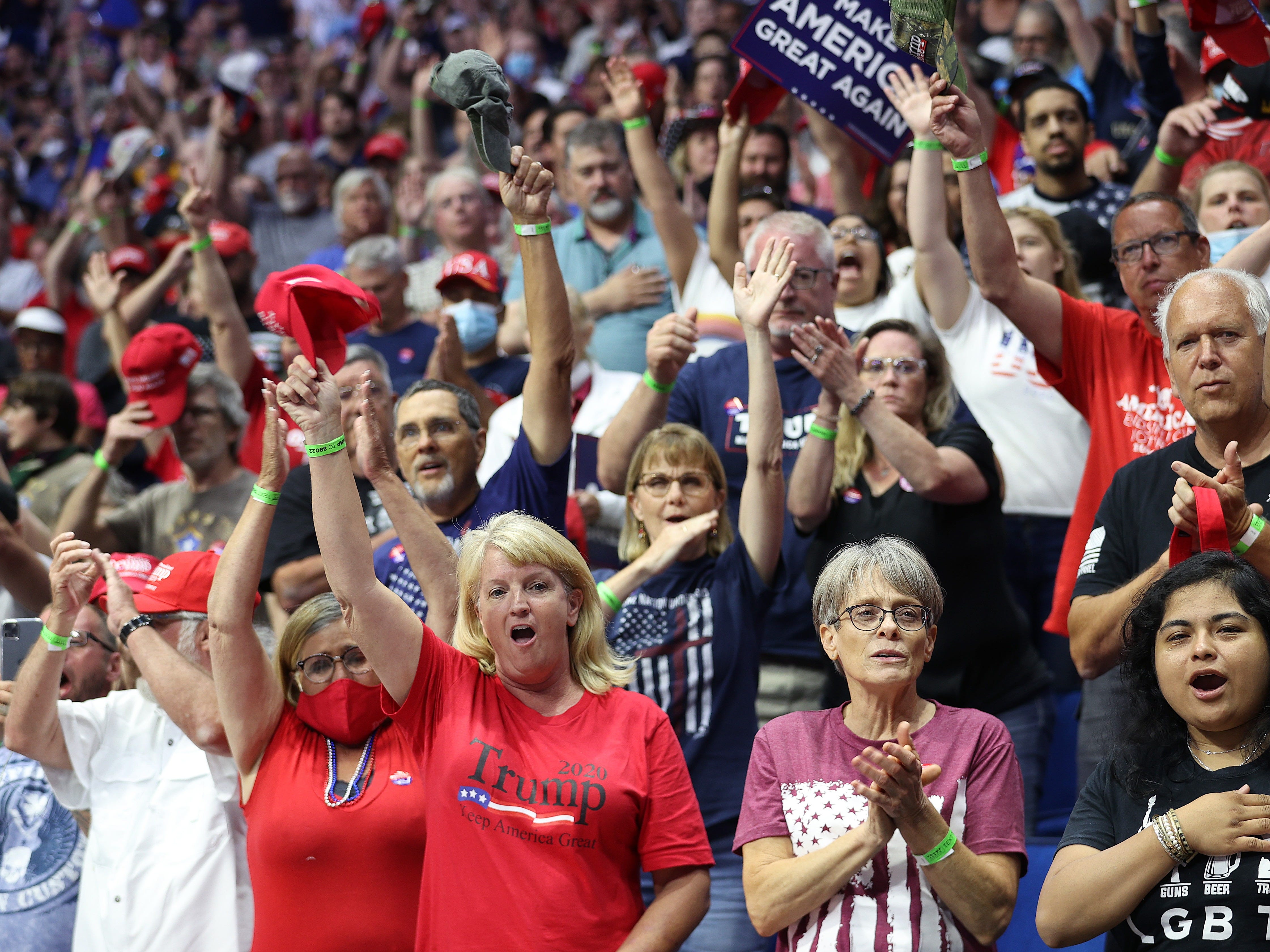 After the rally, a source told CNN that two Secret Service agents also tested positive for the coronavirus. 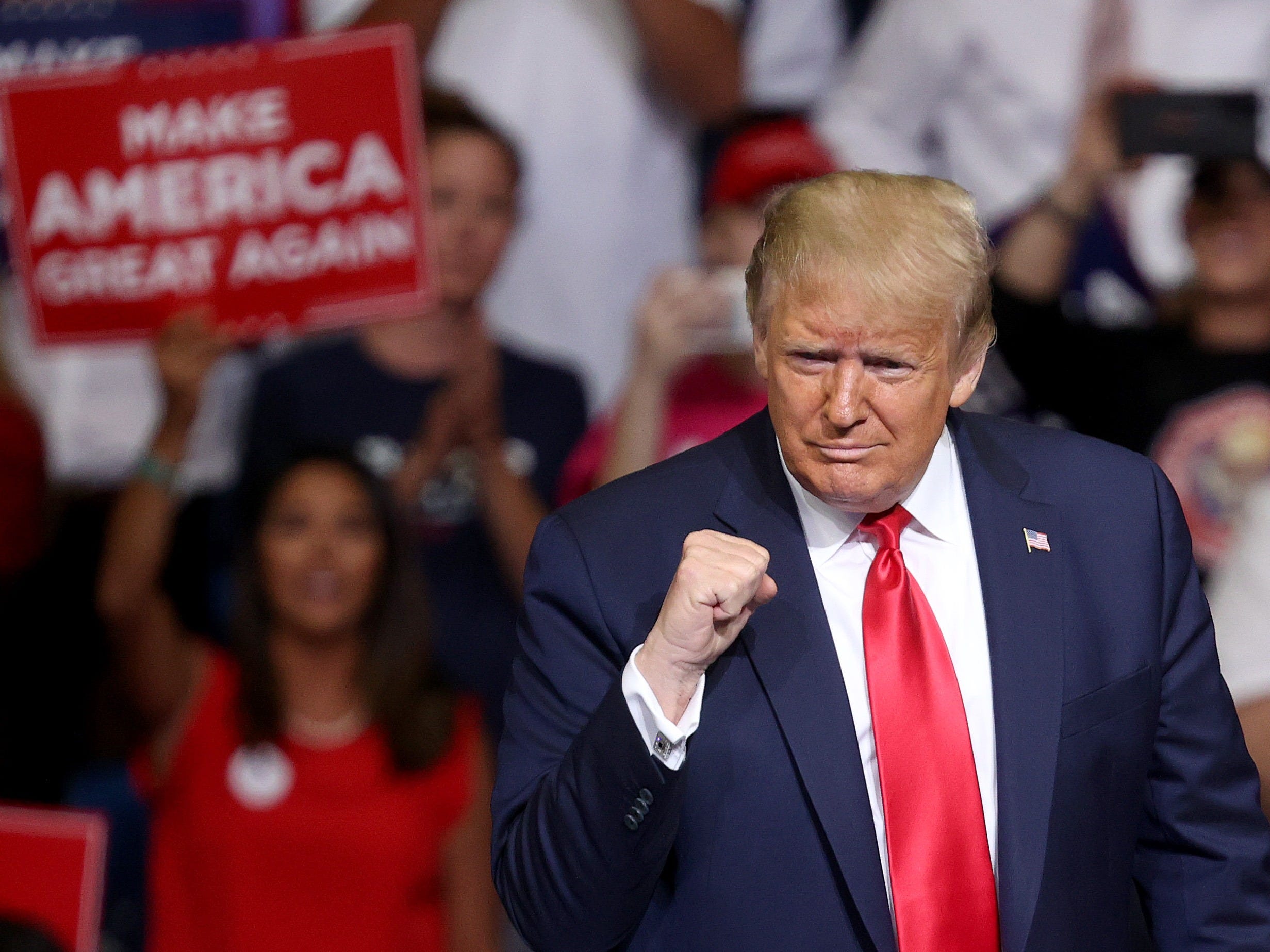