The huge container ship blocking the Suez Canal is still stuck 72 hours later, snarling world trade. Its owners say it might get unstuck on Saturday. 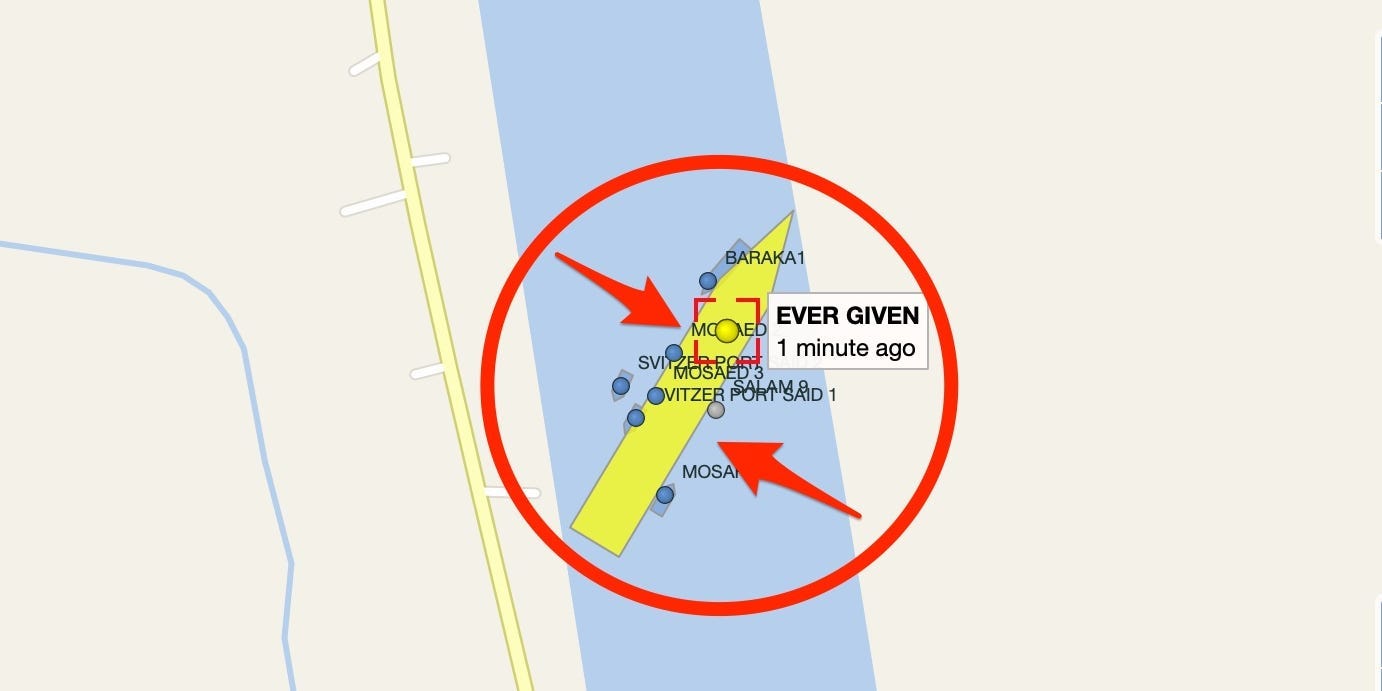 Vessel FinderA map of Ever Given, the large yellow vessel, stuck in the middle of the Suez Canal and surrounded by smaller cargo ships.

A massive container ship, the Ever Given, has been stuck blocking the Suez Canal for more than 72 hours, despite repeated efforts to free it.

The ship’s owner, Japanese company Shoei Kisen, said Friday that it was sorry for the disruption, and said it hoped to free the vessel on Saturday, according to Nikkei Asia.

The bow and stern of the vessel have been lodged at opposing banks of the canal since early Tuesday, completely blocking the main channel of one of the world’s most important shipping routes.

The Ever Given, a nearly 60.96m-wide, 396.24m-long cargo ship sailing under a Panamanian flag, is pictured here viewed from land as of Thursday morning local time: 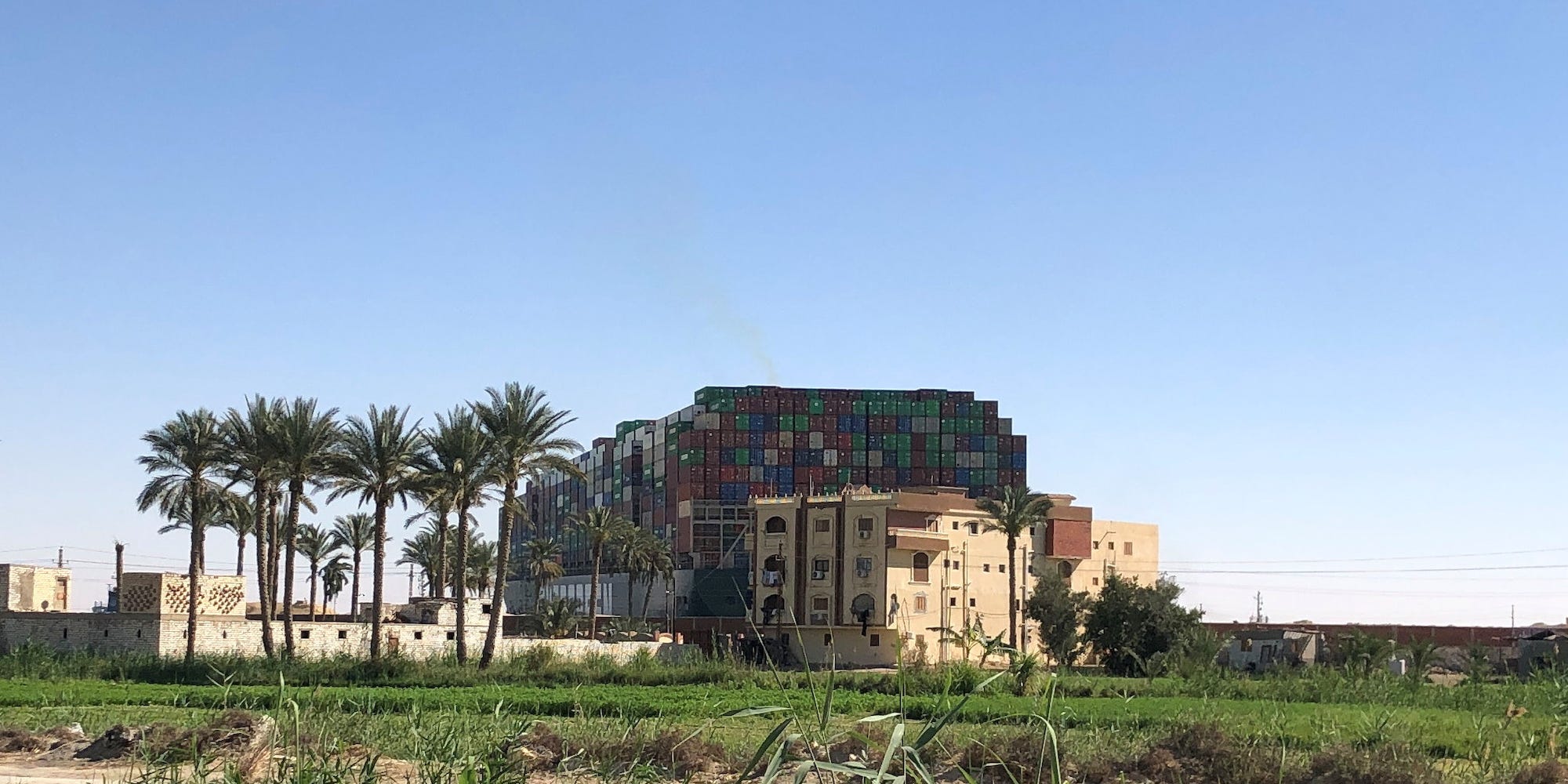 Ahmed Fahmy/ReutersThe stranded container ship Ever Given, one of the world’s largest container ships, on Thursday after it ran aground in Egypt’s Suez Canal. 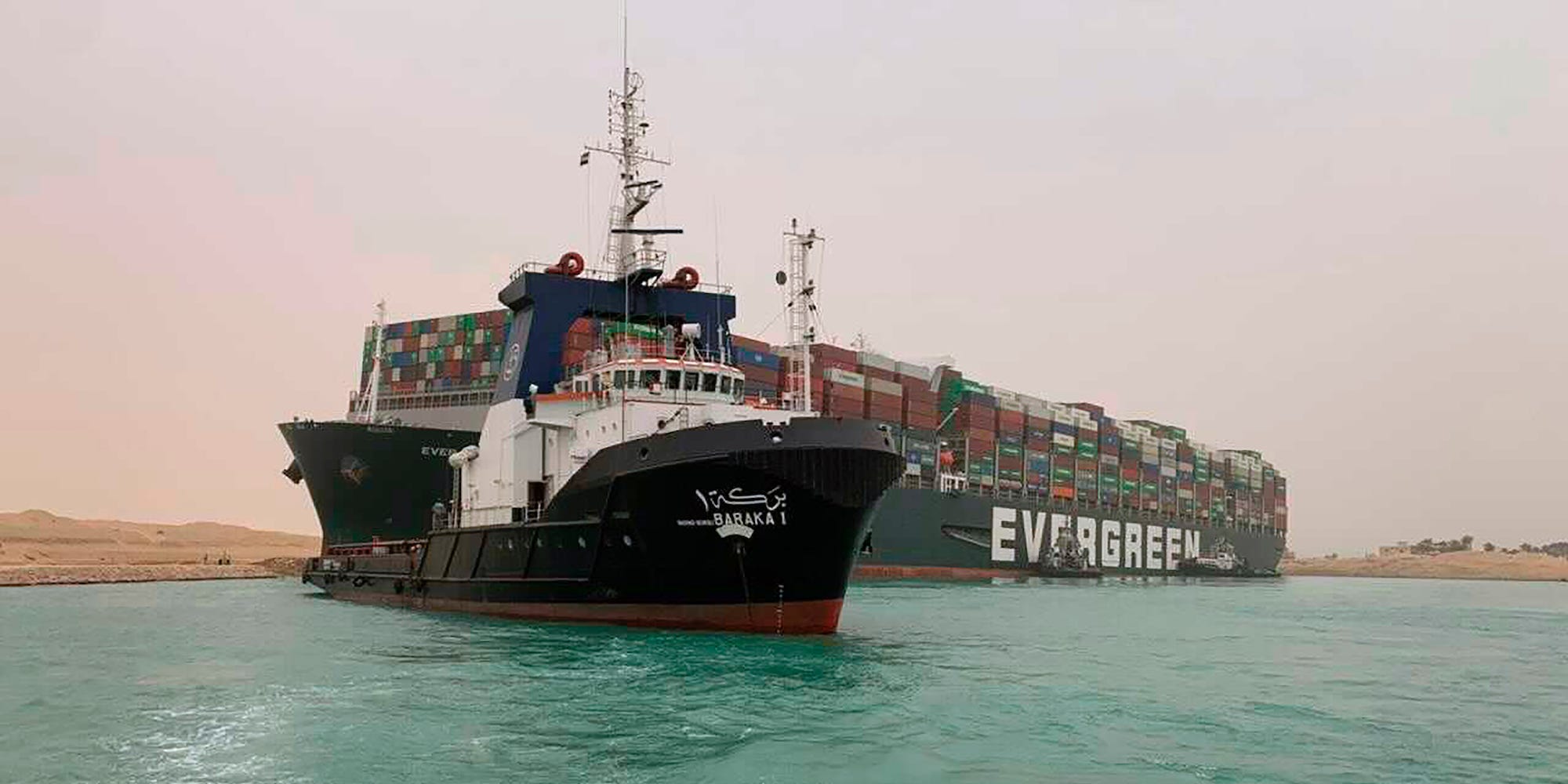 Suez Canal Authority via APA ship near the stranded Ever Given on Wednesday.

The ship ran aground at about 7:40 a.m. local time on Tuesday, according to a statement from Bernhard Schulte Shipmanagement (BSM), the ship’s technical manager.

On Thursday, a Dutch engineering company, Boskalis, was drafted in to tackle the problem. Its CEO, Peter Berdowski, likened the ship to a “beached whale”

“It’s an enormous weight on the sand,” Berdowski added, according to Reuters.

These and other efforts had, as of Friday, failed to do much.

The delay is driving some shipping firms to “panic mode,” one logistics specialist told Bloomberg. Michael Piza, vice president of corporate business development for Apex Logistics International, told the outlet that demand for air freight was likely to soar.

Shippers are also considering detouring round the southern tip of Africa, a route that can typically add 4,828km to a journey between the Indian Ocean and North Atlantic, experts told Insider.

Part of the vessel embedded itself in the bank of the canal, according to images shared on Twitter by the shipping analyst John Scott-Railton, an analyst based at the University of Toronto:

A statement posted Wednesday from the Ever Given’s shipping company, GAC Egypt, said that wind conditions had complicated efforts to free the vessel.

The ship is headed for Rotterdam, Netherlands, from the Yantian District of China, according to the ship-tracking site Vessel Finder. 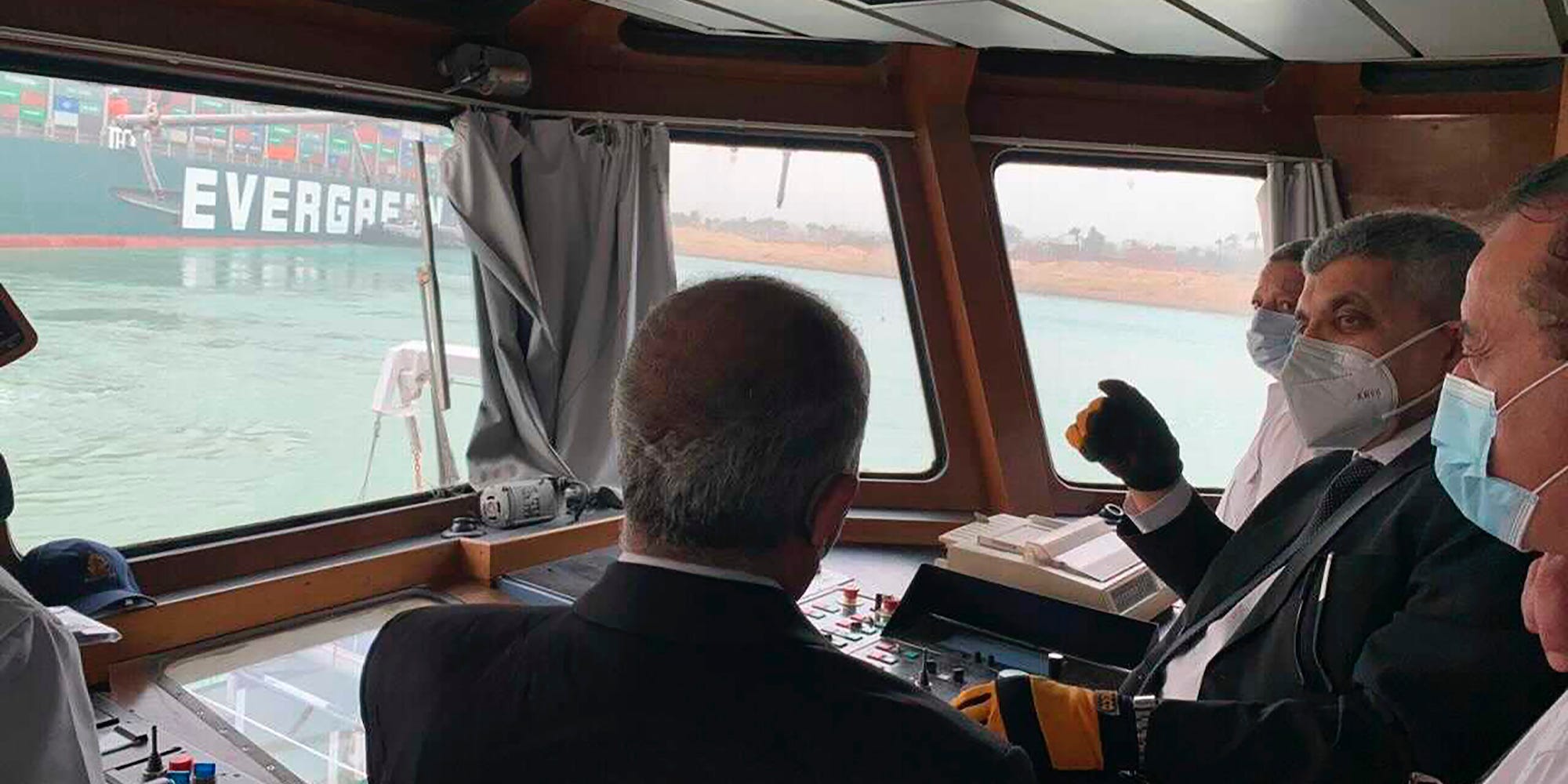 The ship had traveled through Taipei and Malaysia and hoped to arrive in the Netherlands on March 31. Instead, it ended up wedged diagonally in the canal, blocking about 150 cargo ships from both sides, according to the Associated Press.

A smaller second channel of the canal has allowed some smaller ships to move, but it is not large enough for the biggest container ships. 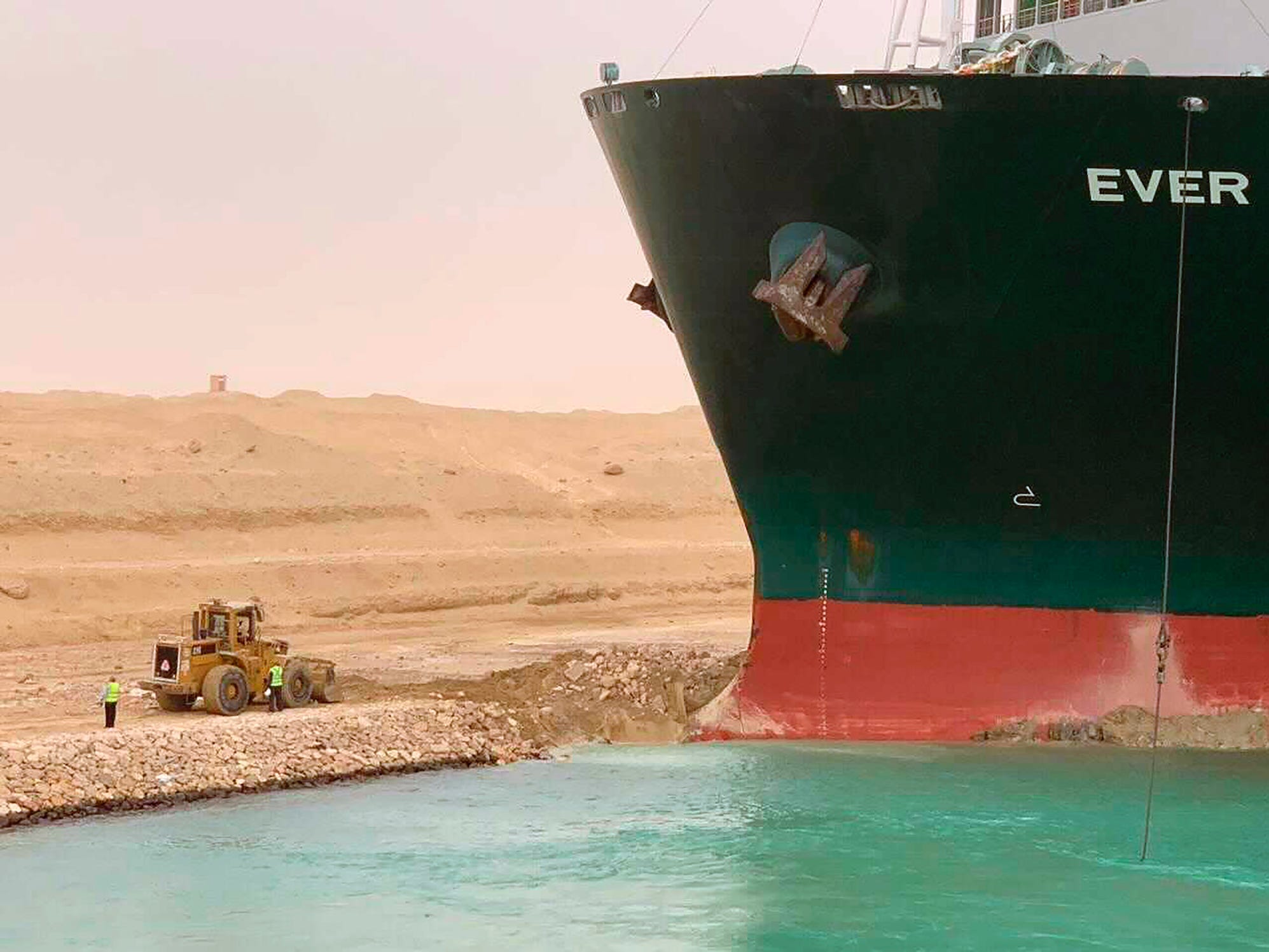 Suez Canal Authority via APThe Ever Given seen with its bow stuck in the canal wall on Wednesday. 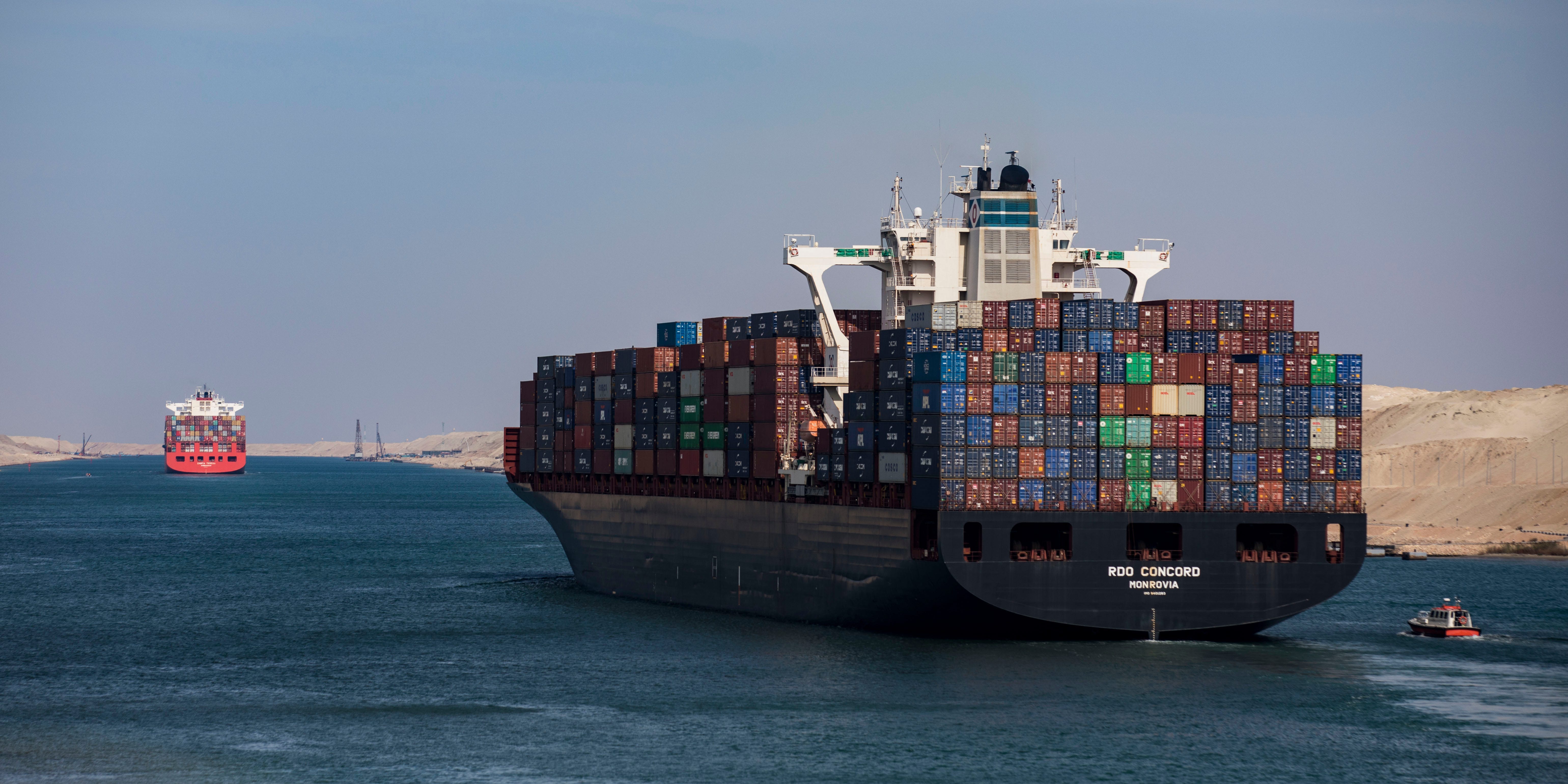 The Suez Canal was constructed in 1869 to connect the Mediterranean and Red Seas.

It allows for the shortest possible trade route by water between Europe and Asia. In 2015, the Egyptian government finished an $US8 ($10) billion renovation of the canal to attract more business and allow for smoother sailing.

Imagery on Vessel Finder showed the Ever Given’s slow progress in getting unstuck: