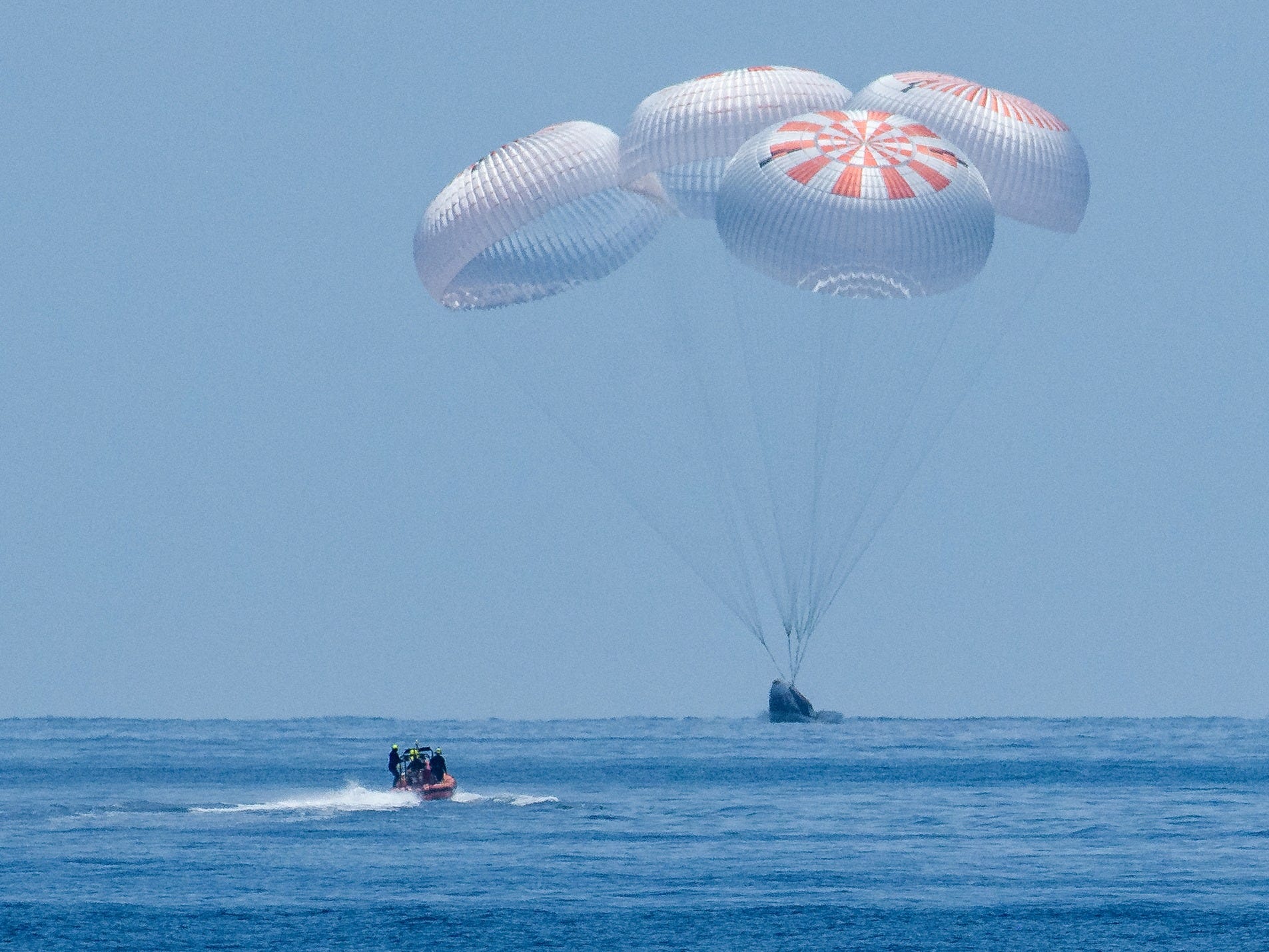 Bill Ingalls/NASASpaceX’s Demo-2 mission splashing down in the Gulf of Mexico with the NASA astronauts Bob Behnken and Doug Hurley on Sunday after returning from a 63-day mission to the International Space Station.

The NASA astronauts Bob Behnken and Doug Hurley, tucked inside SpaceX’s Crew Dragon spaceship, survived a fiery plunge through Earth’s atmosphere on Sunday. They landed safely in the Gulf of Mexico, a return that marked the completion of humans’ first space mission in a commercial vehicle.

As the toasted capsule bobbed in the water, its parachutes floating around it, it was quickly swarmed by boats. Some of them were recovery boats with professional teams from NASA and SpaceX. But many were just onlookers.

The crowd “was not what we were anticipating,” NASA Administrator Jim Bridenstine said in a briefing shortly after the splashdown.

The Russian cosmonaut Ivan Vagner – the astronauts’ former crewmate on the International Space Station – spotted the landing and the boats from his vantage point 250 miles above Earth. He shared pictures of it in a tweet, below.

.@AstroBehnken и @Astro_Doug, I congratulate you on your successful return to Earth!

A few minutes after landing, the ISS flew over the #CrewDragon splashdown site in the Gulf of Mexico. pic.twitter.com/MZugsCt8tw

The US Coast Guard had cleared the area ahead of the landing, Bridenstine said, but after the capsule splashed down, “the boats just made a beeline for it,” he said.

Some of the boats passed close to the capsule, including one with a passenger waving a Trump flag.

“Maybe next time we shouldn’t announce our landing zone,” the SpaceX engineer Kate Tice said during NASA’s live feed of the landing.

In a statement issued to CBS, the Coast Guard said it warned boaters multiple times ahead of the splashdown with radio alerts and physical warnings, yet lacked an order to legally enforce a hazard zone.

Bridenstine pledged that NASA would “do a better job” of clearing boats for future water landings. The agency has contracted six round-trip Crew Dragon flights to bring astronauts to and from the space station.

Having bystander boats that close to the capsule can be dangerous – both for the astronauts and for people on the boats. That’s because the capsule was shrouded in low levels of a poisonous gas called nitrogen tetroxide.

“What is not common is having passers-by approach the vehicle close range with nitrogen tetroxide in the atmosphere. That’s not something that is good,” he said. “We need to make sure that we’re warning people not to get close to the spacecraft in the future.”

The recovery teams had to wait for the gas to clear before they removed Behnken and Hurley from the capsule. Bridenstine said NASA and SpaceX will look through the data to figure out why the gas lingered more than expected.

In addition to Vagner, the NASA astronaut Chris Cassidy is still on the space station, as is the cosmonaut Anatoly Ivanishin.

“We had the luxury of having a just a super crew on board the International Space Station, with Chris Cassidy, with Anatoly and Ivan. They just took wonderful care of us,” Behnken said in a briefing after the landing.

The next astronauts slated to fly the Crew Dragon – Victor Glover, Mike Hopkins, Soichi Noguchi, and Shannon Walker – are expected to launch to the ISS in September.