Snapchat CEO Evan Spiegel and former Victoria’s Secret model Miranda Kerr got married in May, but they have only just published images and shared details of their big day.

Kerr posted three snaps of the private affair on her Instagram account, @mirandakerr, after they were first published as part of an interview with US Vogue.

Kerr told the magazine that she and Spiegel invited just 45 close friends and family to the intimate ceremony, which took place at the Snapchat chief’s home in Los Angeles. A canopy was hung high above the garden to ensure privacy for the couple.

There were no bridesmaids, but Kerr’s six-year-old son Flynn — whose dad is English actor Orlando Bloom — was the ring bearer and later joined the newly weds in their first dance. Flynn was dressed in a Dior three-piece suit.

She added: “I’ve had a lot of fun with fashion, and I used to be more wild, free, bohemian. But in this period of my life, my style is more pulled back.

“My greatest sources of inspiration have always been Grace, Audrey Hepburn, and my grandmother, who at 80 has an effortless chic: a nice pant, a white blouse, a scarf, a little heel.”

Kerr told Vogue that she began her wedding day by making her husband-to-be’s favourite dish of slow-roasted chicken scented with turmeric and lemon, which the caterers then replicated for the rest of the wedding party.

The couple enjoyed an hour of yoga together ahead of the nuptials, in an attempt to calm any nerves, though Kerr confessed to the magazine that she still ended up crying through her vows.

She later changed into a short and lacy number also designed by Chiuri. The night ended with karaoke, and Kerr singing along to Shania Twain.

Below, one of the images shared by Kerr shows a flower adorned alter, at which the couple married. 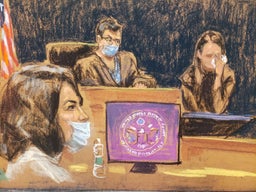