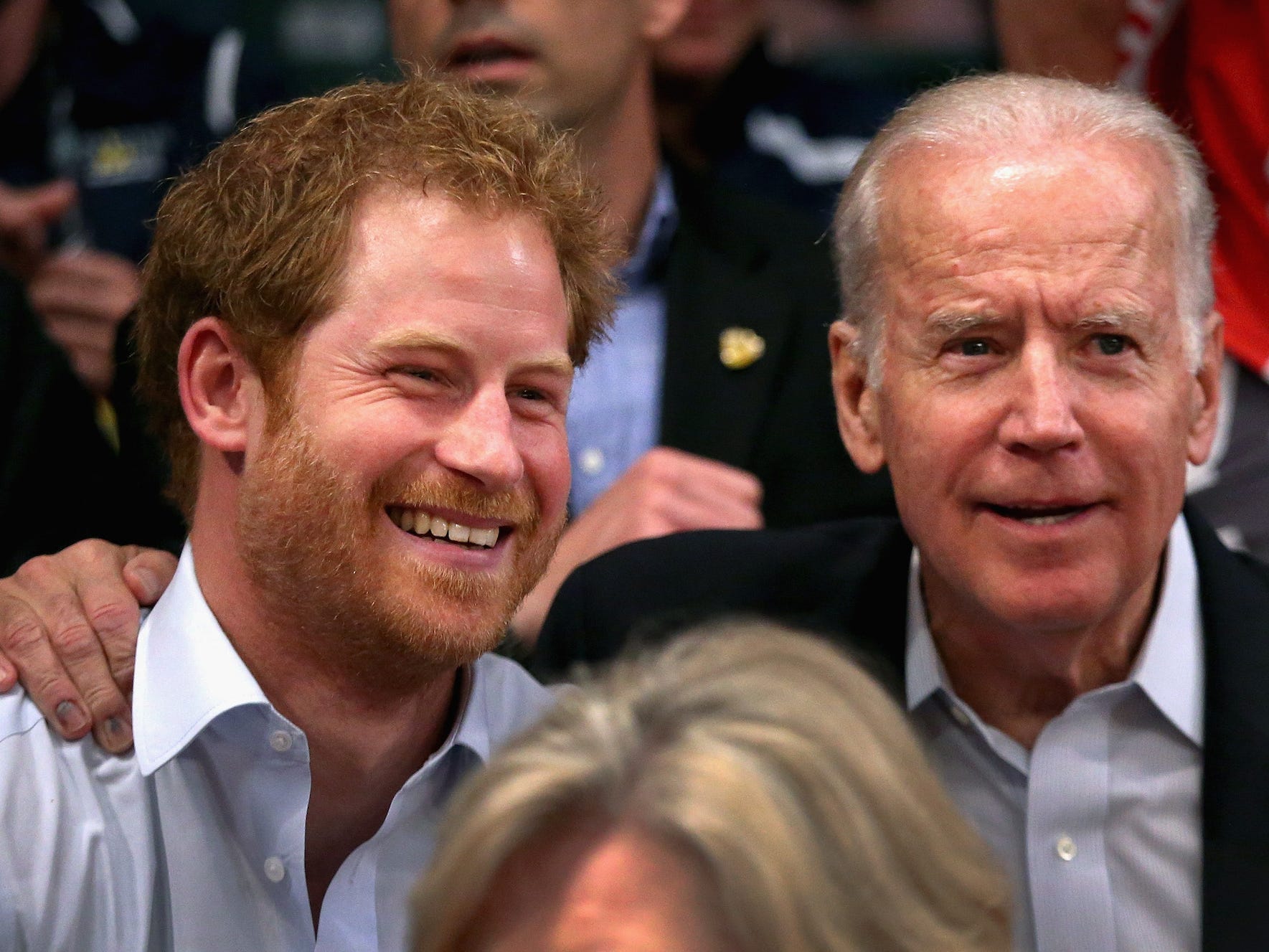 Recently resurfaced photos show Prince Harry and President-elect Joe Biden have met on several occasions, including at the Invictus Games in 2016 and 2017.

The Duke of Sussex has known Biden and his wife Jill for several years, and was first photographed meeting the then-second lady at an event in Washington, DC in 2012.

The couple have been longtime supporters of the Invictus Games, a sporting tournament for injured and wounded service personnel that Harry founded in 2014.

Biden has publicly made fun of Harry’s friendship with his wife, previously joking that he was “a little worried” after Jill spent a weekend with the duke at the Invictus Games in London, according to The Guardian.

Harry’s relationship with the couple appears to be a complete contrast to his relationship with President Donald Trump, who called Meghan Markle “nasty” after a reporter told him that she previously said she’d move to Canada if he was elected in 2016.

Harry appeared to avoid having his picture taken with Trump when the president visited Buckingham Palace last year. 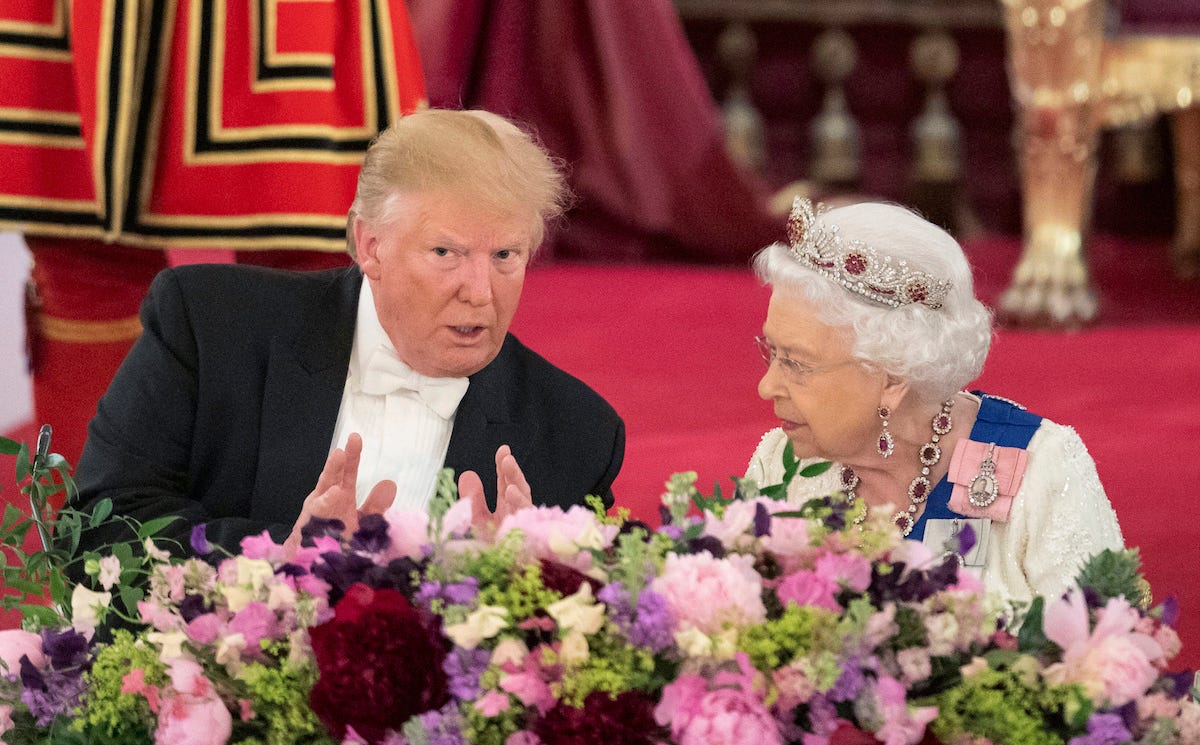 Harry and Markle did not publicly endorse any candidate before the US election, however, Trump seemed to believe they did after he responded to a reporter who asked what he thought of them “essentially encouraging people to vote for Joe Biden.”

The reporter’s question was likely a reference to Markle’s comments that this was “the most important election of our lifetime.”

“I’m not a fan of her,” Trump said. “And I would say this â€” and she probably has heard that â€” but I wish a lot of luck to Harry, because he’s going to need it.”

Representatives for the Duke of Sussex declined to comment on the current status of Harry’s relationship with Biden when contacted by Insider.

Prince Harry was first photographed meeting Joe Biden’s wife, Jill, during a reception for wounded soldiers at the British Embassy in Washington, DC, in 2012. 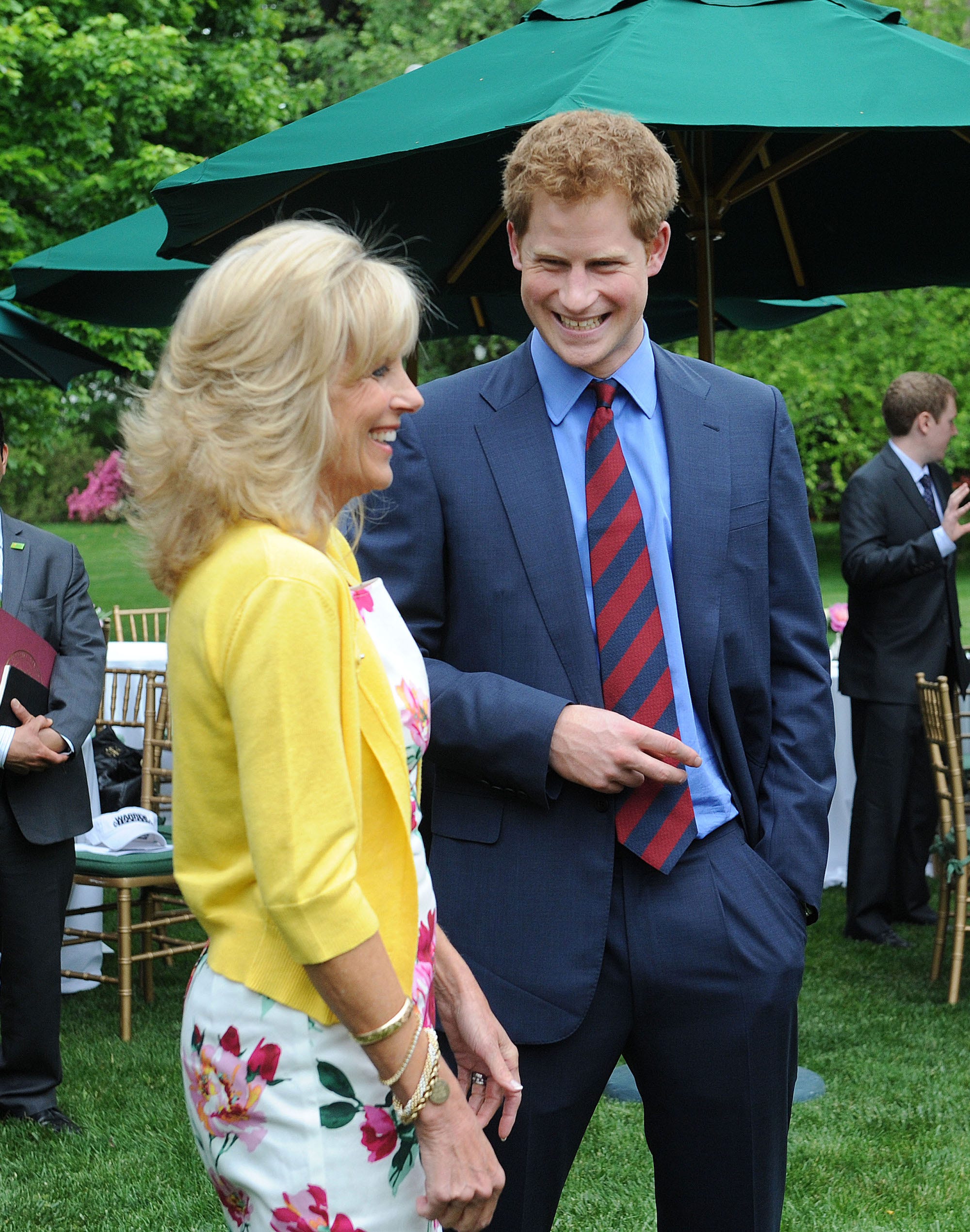 Olivier Douliery/PA Images via Getty ImagesPrince Harry and Jill Biden were first photographed together in 2012.

Harry went on to meet the then-second lady several times over the years, including at the Invictus Games in London in 2014. 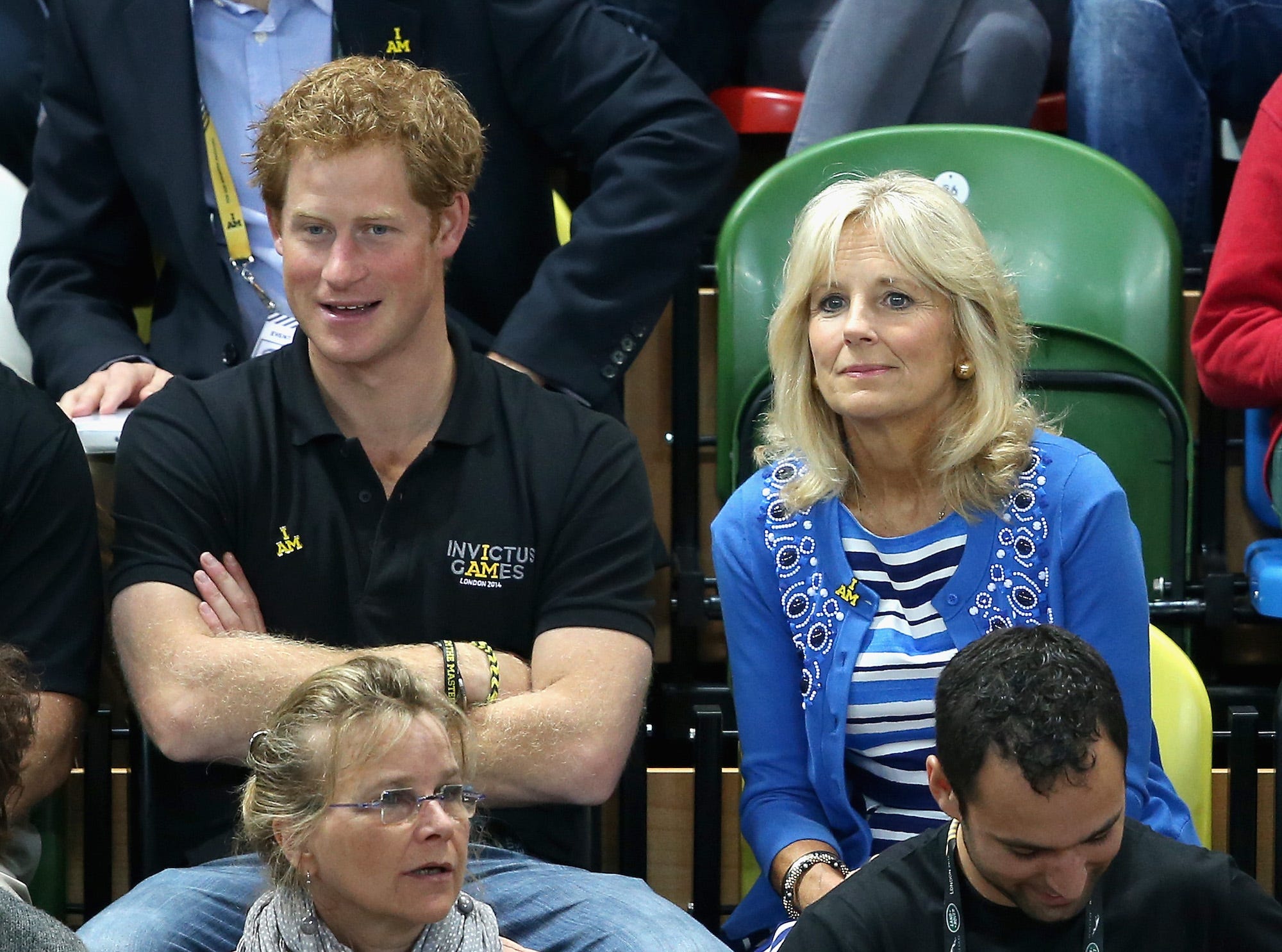 Joe later joked about their appearance together, telling The Guardian: “I read in the Guardian, or one of them, and it says – I’m paraphrasing – everywhere Prince Harry went, he had this blonde woman on his arm. The vice-president’s wife! I’m a little worried here, you know what I mean?” 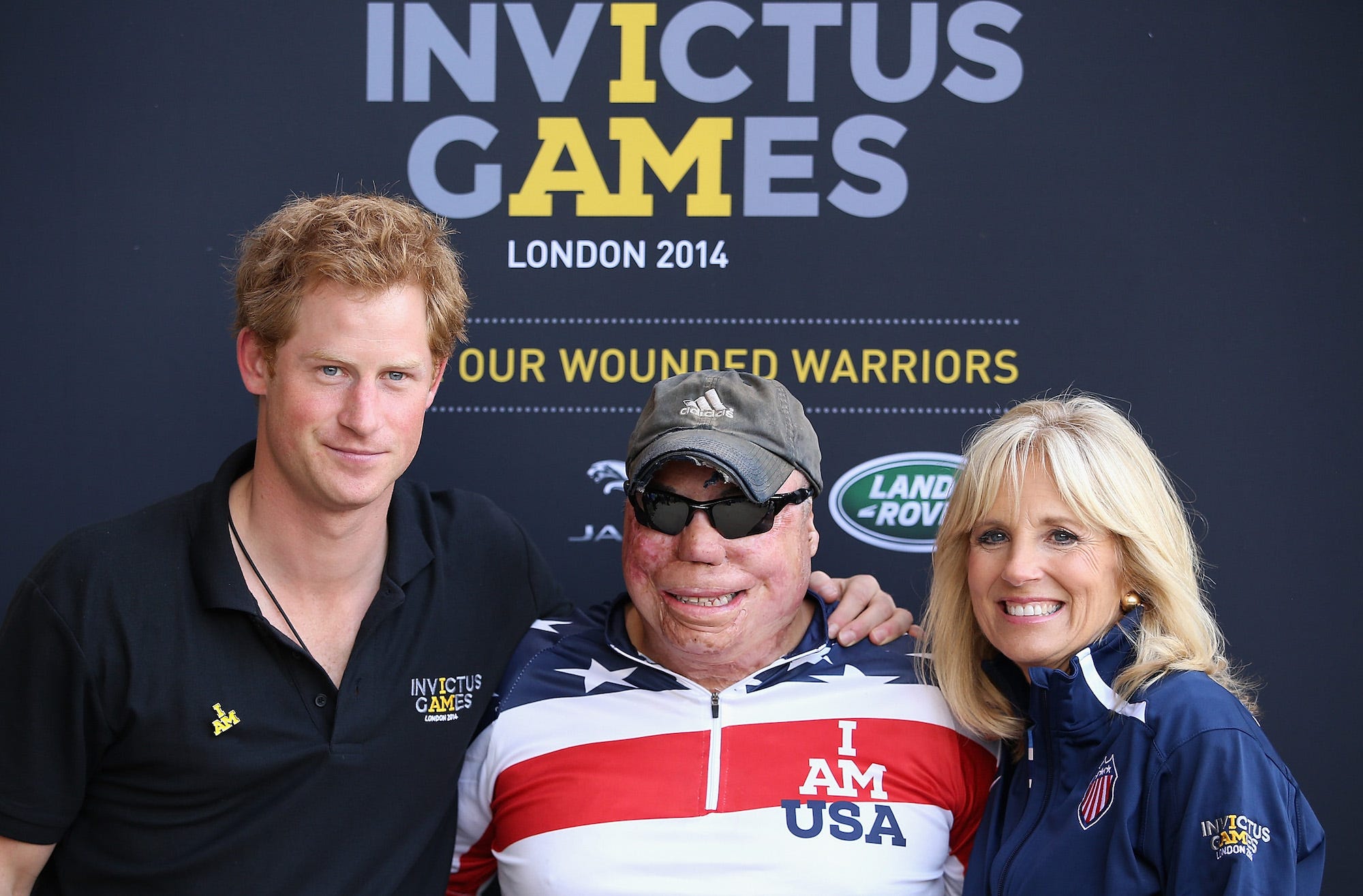 Chris Jackson/Getty ImagesHarry and Jill pose with a competitor at the Invictus Games in London.

They reunited to watch wounded American veterans play basketball in Virginia in 2016, and this time they were joined by Michelle Obama. 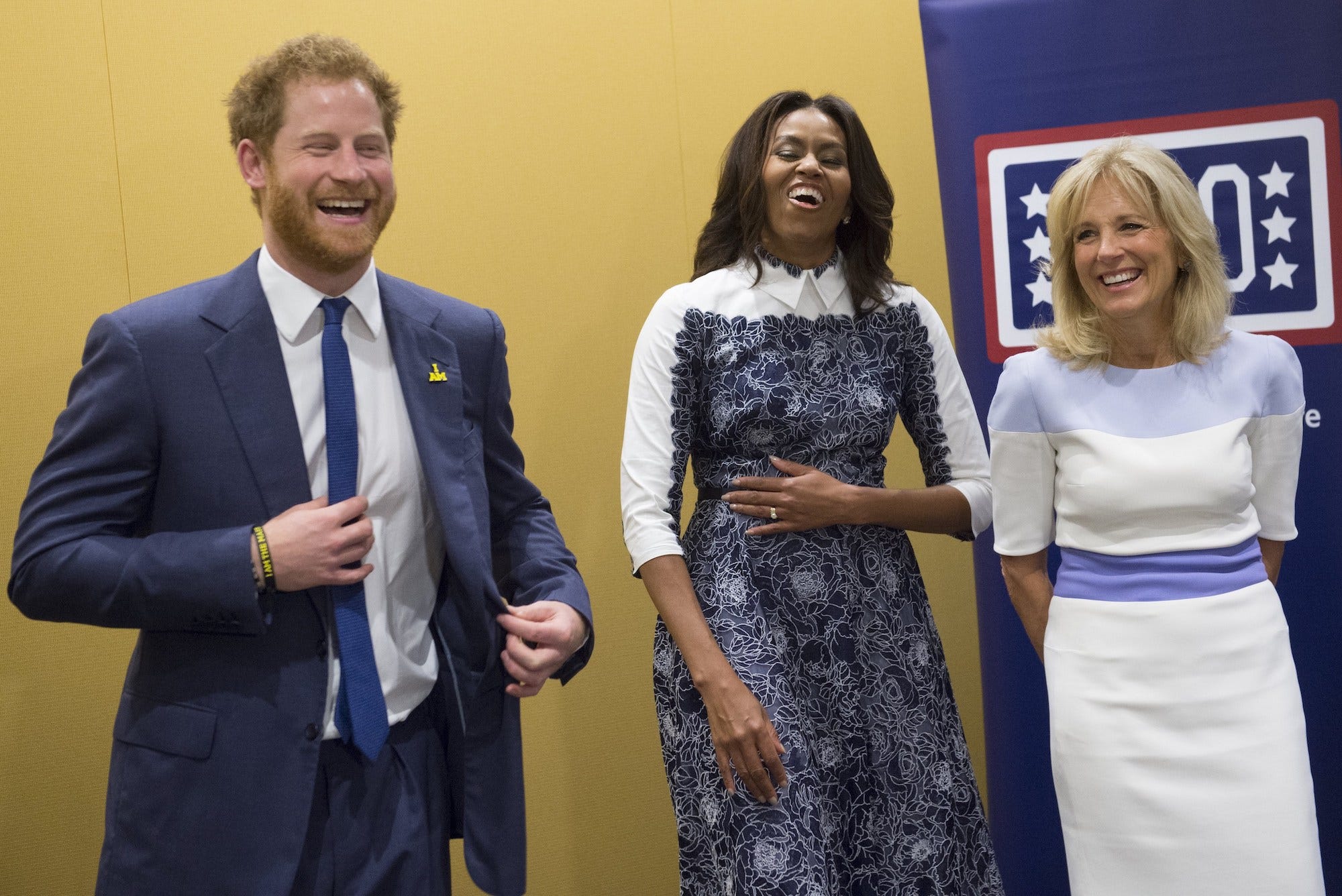 Harry was first photographed with then-Vice President Joe Biden at the Invictus Games in Orlando in 2016. 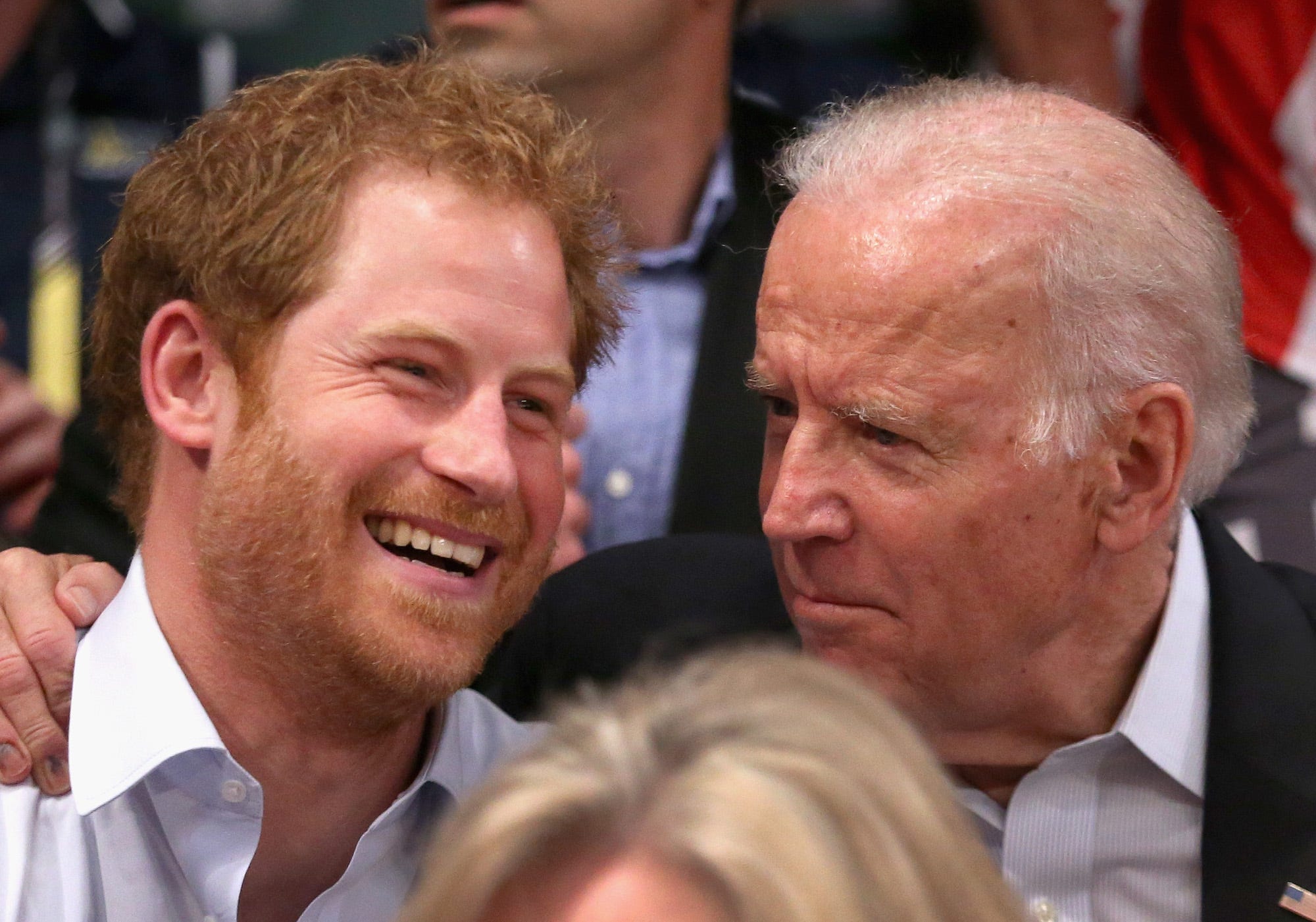 Chris Jackson/Getty ImagesHarry and Biden became fast friends when they met in 2016.

They were joined by Jill to watch the USA vs Denmark wheelchair rugby match. Joe took the opportunity to poke fun at Harry and Jill’s friendship, telling the crowd: “Jill went to London for the last Games. She spent too much damn time with Prince Harry!'”

Gerardo Mora/Getty Images for Invictus GamesHarry directs Jill to something in the crowd.

They reunited for the Invictus Games the following year, this time in Toronto. 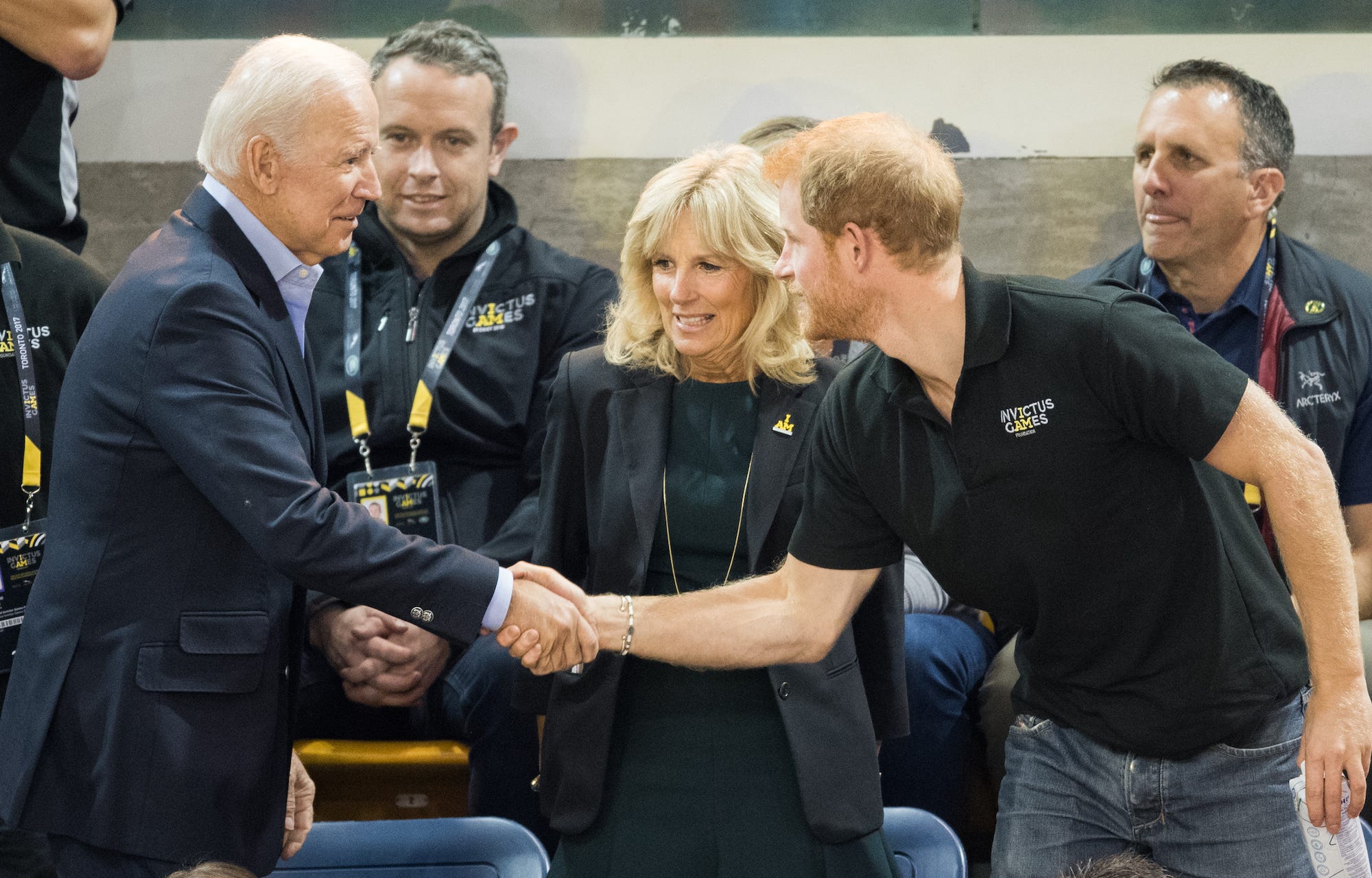 Harry and Joe shared a few laughs as they cheered on team USA at the Wheelchair Basketball Finals. 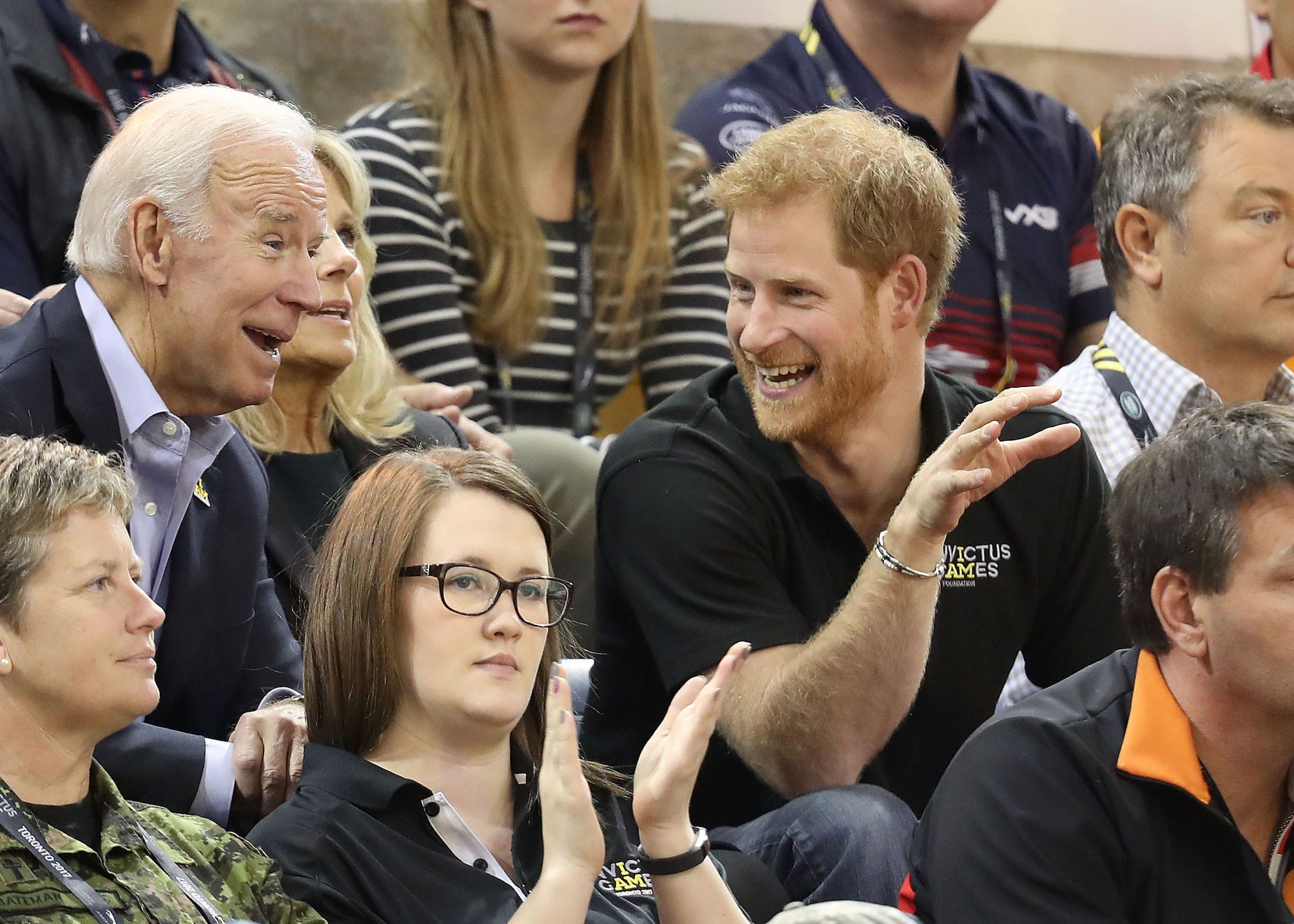 Chris Jackson/Getty Images for the Invictus Games FoundationHarry, Joe, and Jill watch the games at the ESPN Wide World of Sports in Orlando, Florida.

The trio were clearly invested in the outcome of the match. 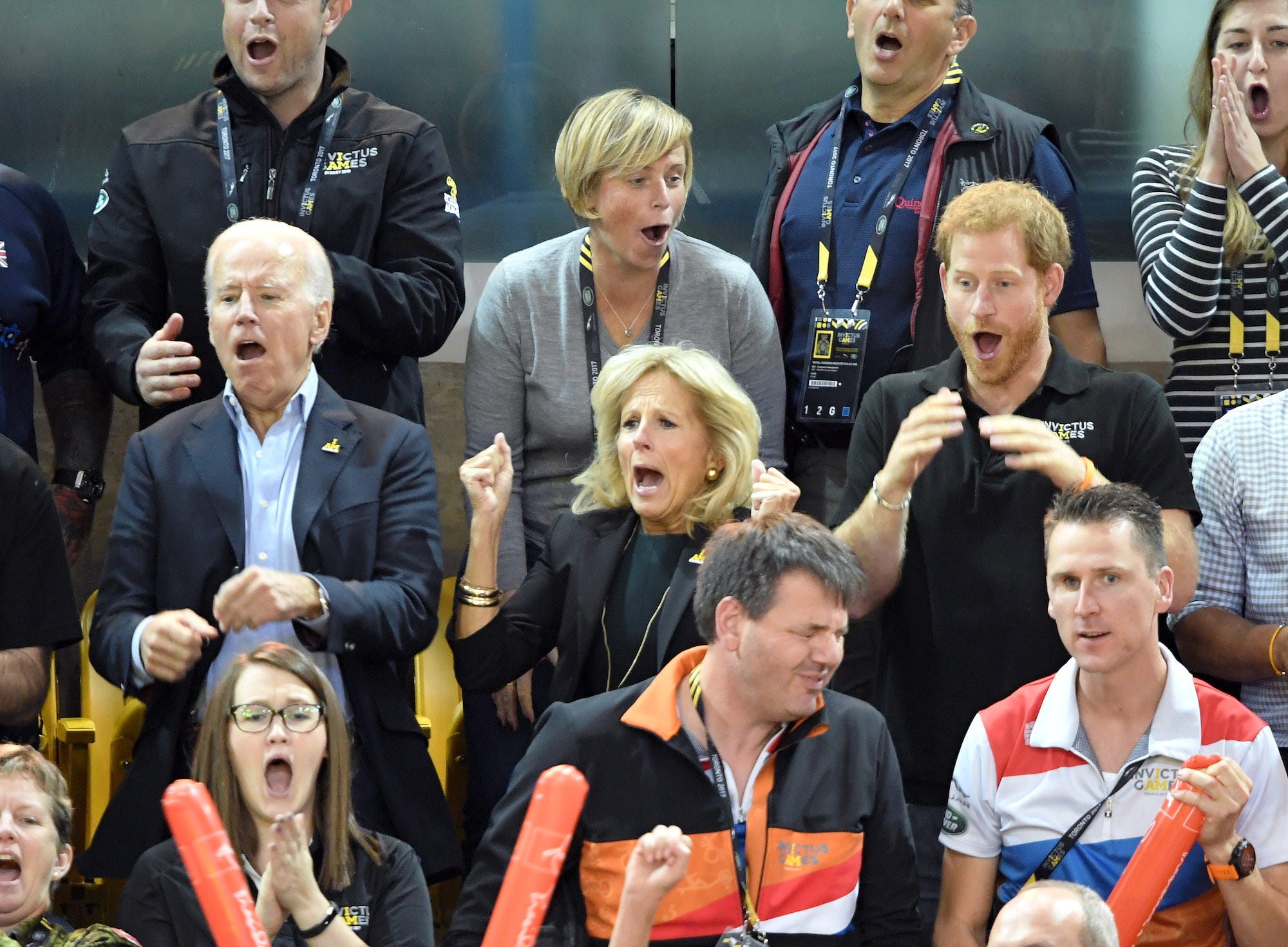 Karwai Tang/WireImage/Getty ImagesTheir facial expressions spoke for themselves as they watched the sporting tournament.

They were joined by former President Barack Obama to watch a basketball match on day seven of the tournament. 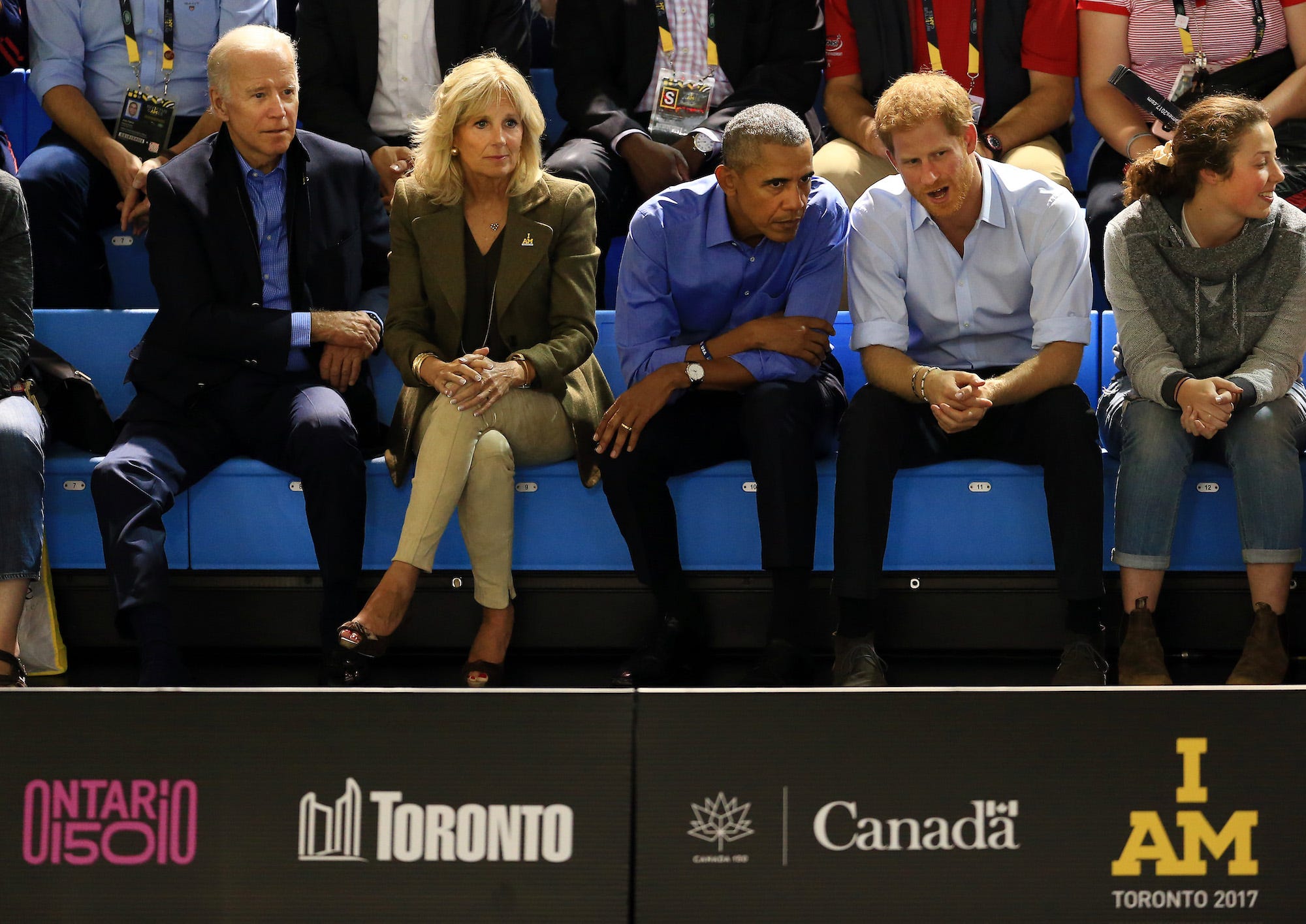 These two are clearly friendship goals. 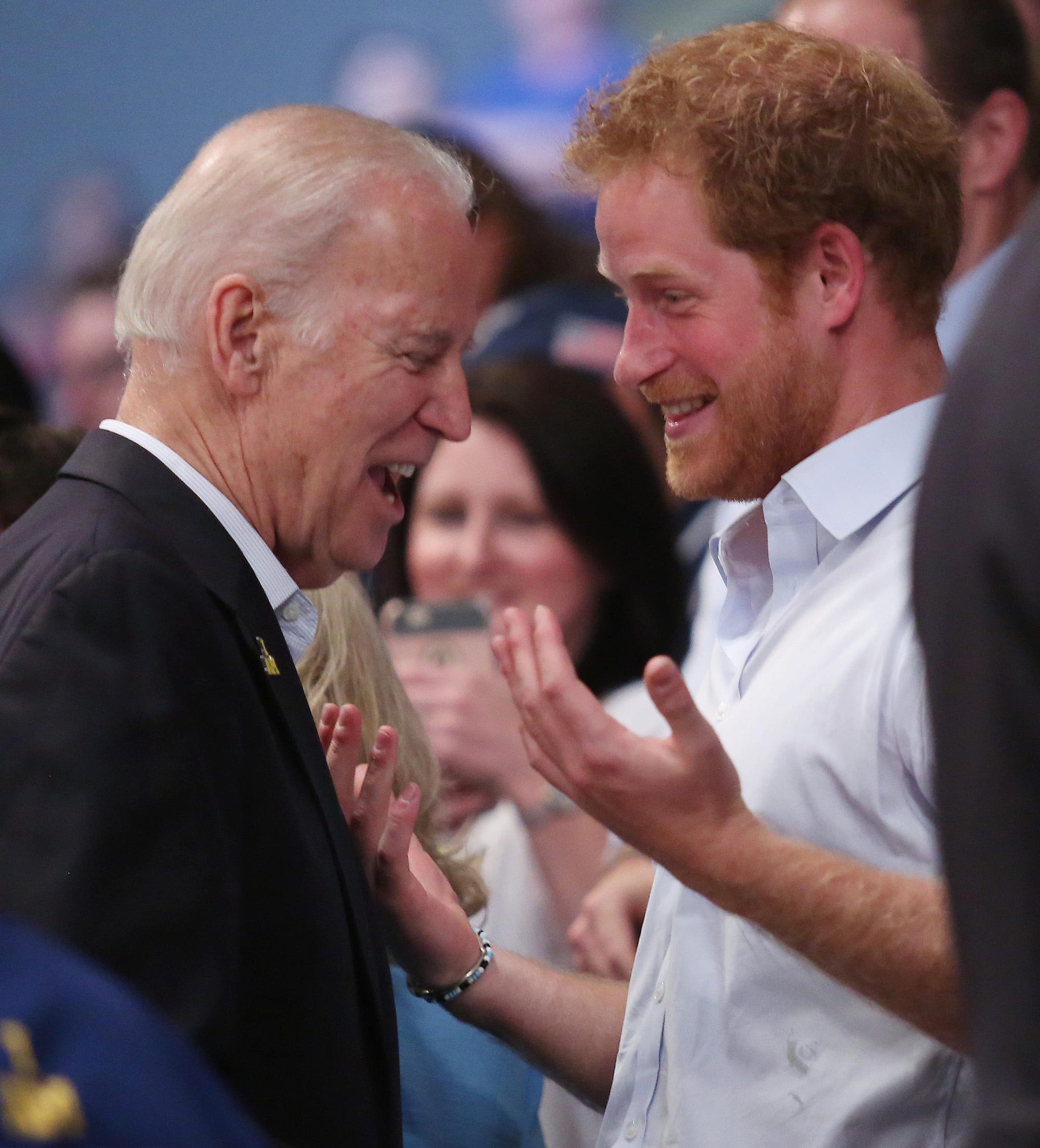