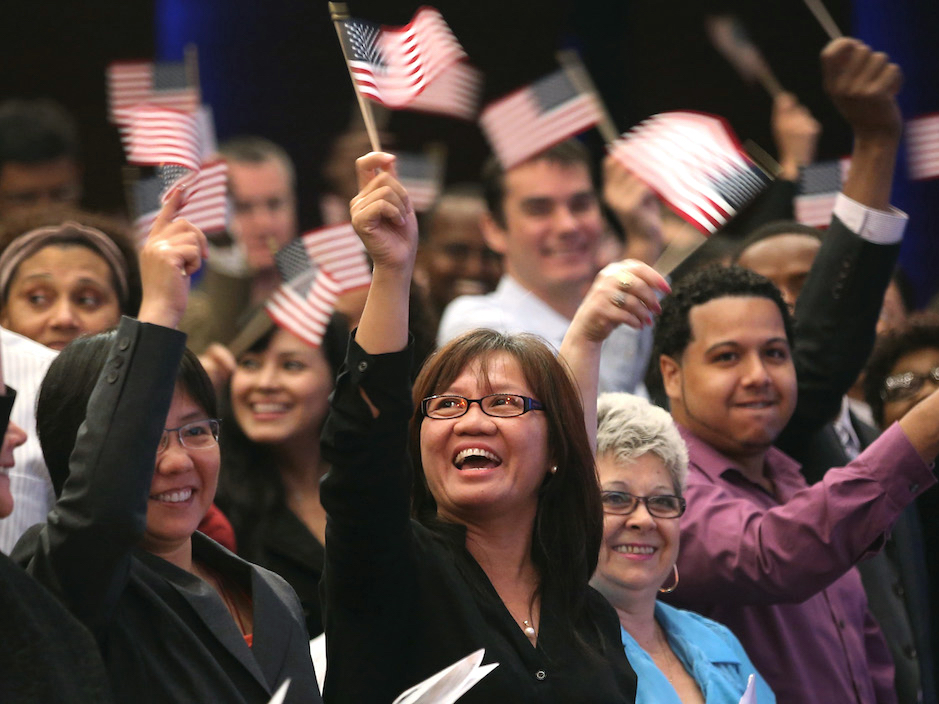 For many immigrants who come to the US, the citizenship process can be long, expensive, and stressful. So it comes as no surprise that, for those who have been through the process, the moment they become naturalized as citizens is typically filled with joy, relief, and tears.

The naturalization ceremony is joyful for those who have been through the long process to become a citizen. Pictured, a new citizen smiles and waves her flag among a crowd in Los Angeles. Silvia Hunt cheers as Mexico is announced during a naturalization ceremony. APSilvia Hunt during a ceremony at Turner Field in Atlanta.

She became a citizen on September 16, 2016. She was among 755 people who became new US citizens at Turner Field in Atlanta, the AP reported.

Maria E. del Rio kisses her husband Raul del Rio as he becomes a citizen. Originally from Mexico, he waited 53 years to become a citizen. Roberta Minke hugs her daughter Sophia after becoming a citizen. She became a citizen on July 3, 2014 in Irving, Texas. Over 9,000 new citizens were sworn in over the Fourth of July holiday week in ceremonies across the country that year, the Associated Press reported.

Robert Moshenko, who is originally from Canada, wears an American flag jacket during his ceremony to become a citizen. 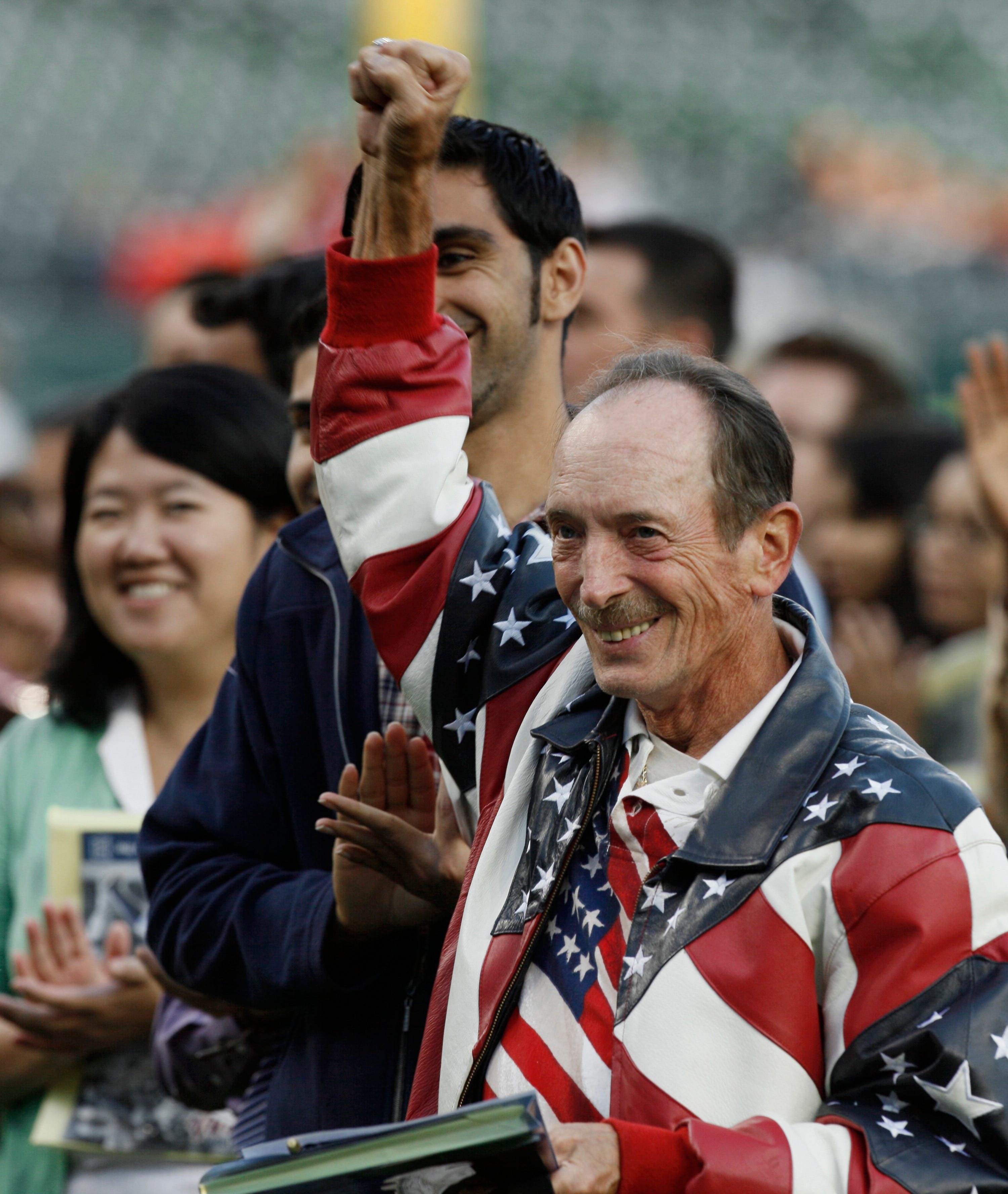 Jean Naason waves his flag and smiles during a naturalization ceremony in Miami. It’s also an emotional day for many — Brianna Valanzuele hugs her grandmother after she became a citizen. Hatoumata Tounkara, a Muslim refugee who came to the US from Mali, holds up her naturalization certificate. Ileana Gonzalez also holds back tears during a ceremony held at the Everglades National Park in Florida. 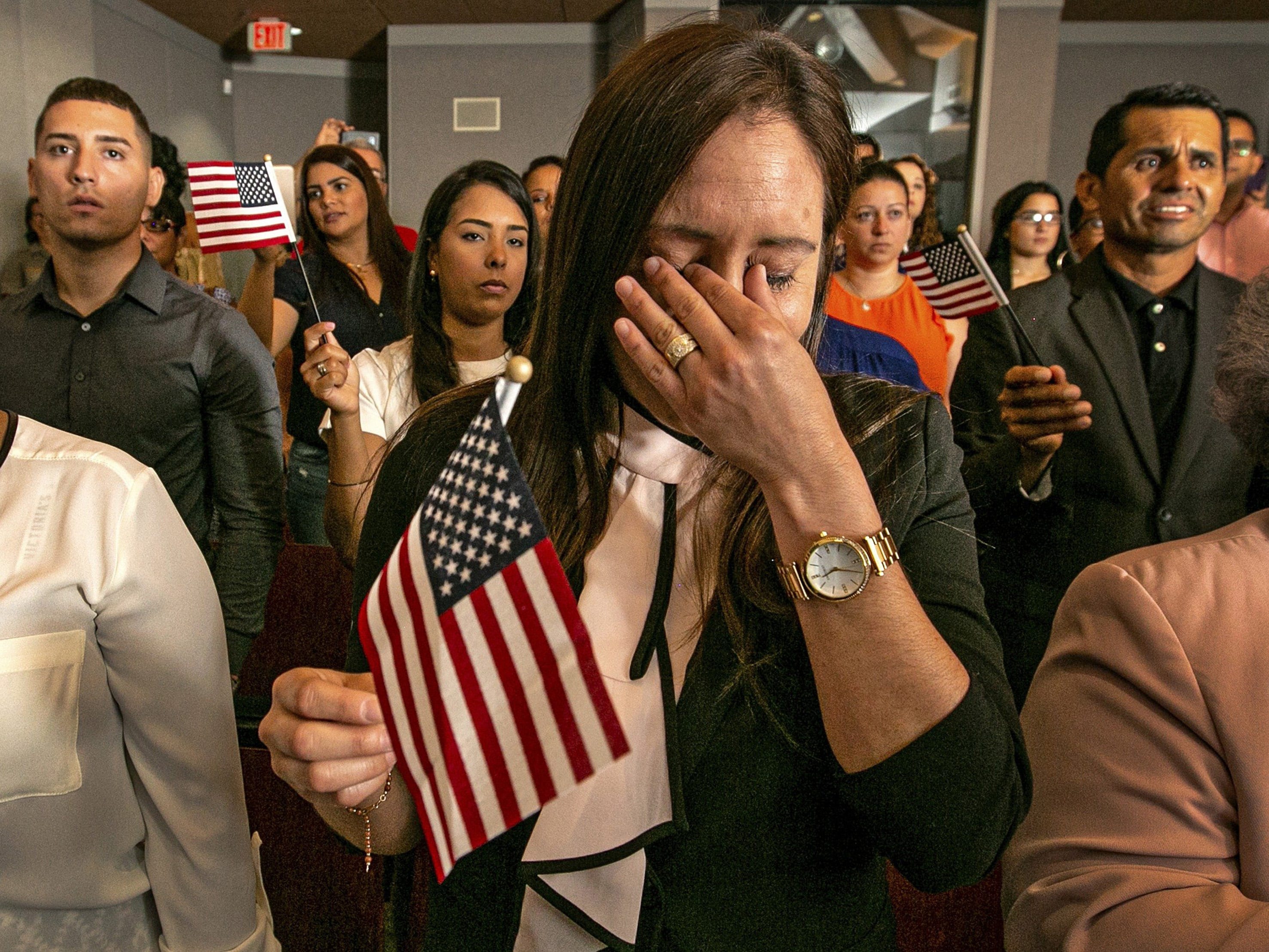 Al Diaz/Miami Herald/Tribune News Service via Getty ImagesA group of immigrants hold on to their American flags during the ceremony.

Immaculee Ilibagiza cries while reciting the pledge. She sought asylum in the US after fleeing the 1994 Rwandan genocide, according to the Associated Press. 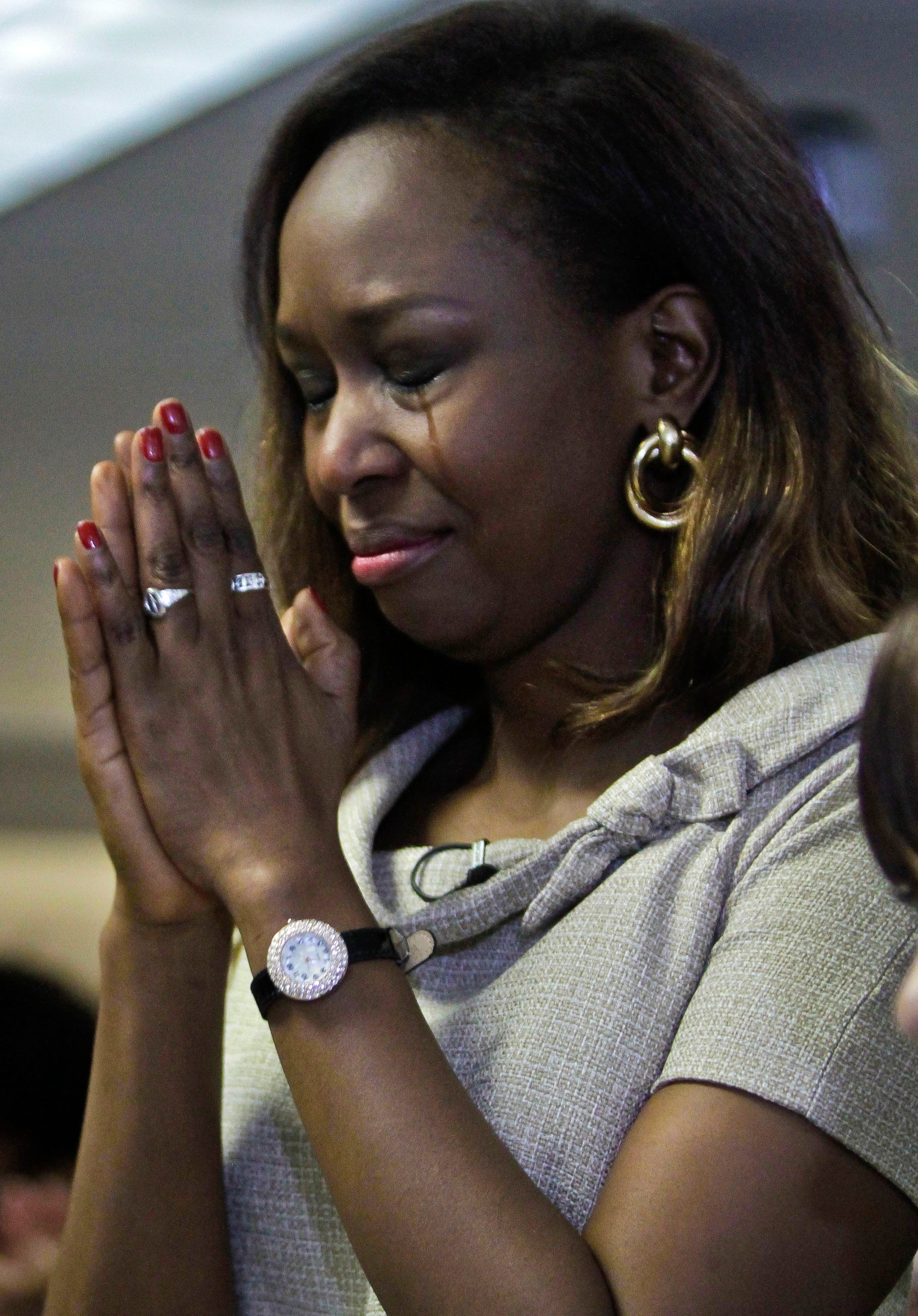 She became a citizen on April 17, 2013. According to the AP, Ilibagiza said, “Who would know that this fantasy would finally happen.”

She is also the author of the best-selling book, “Left to Tell, Discovering God Amidst the Rwandan Holocaust.”

A new citizen has an emotional moment during his ceremony. 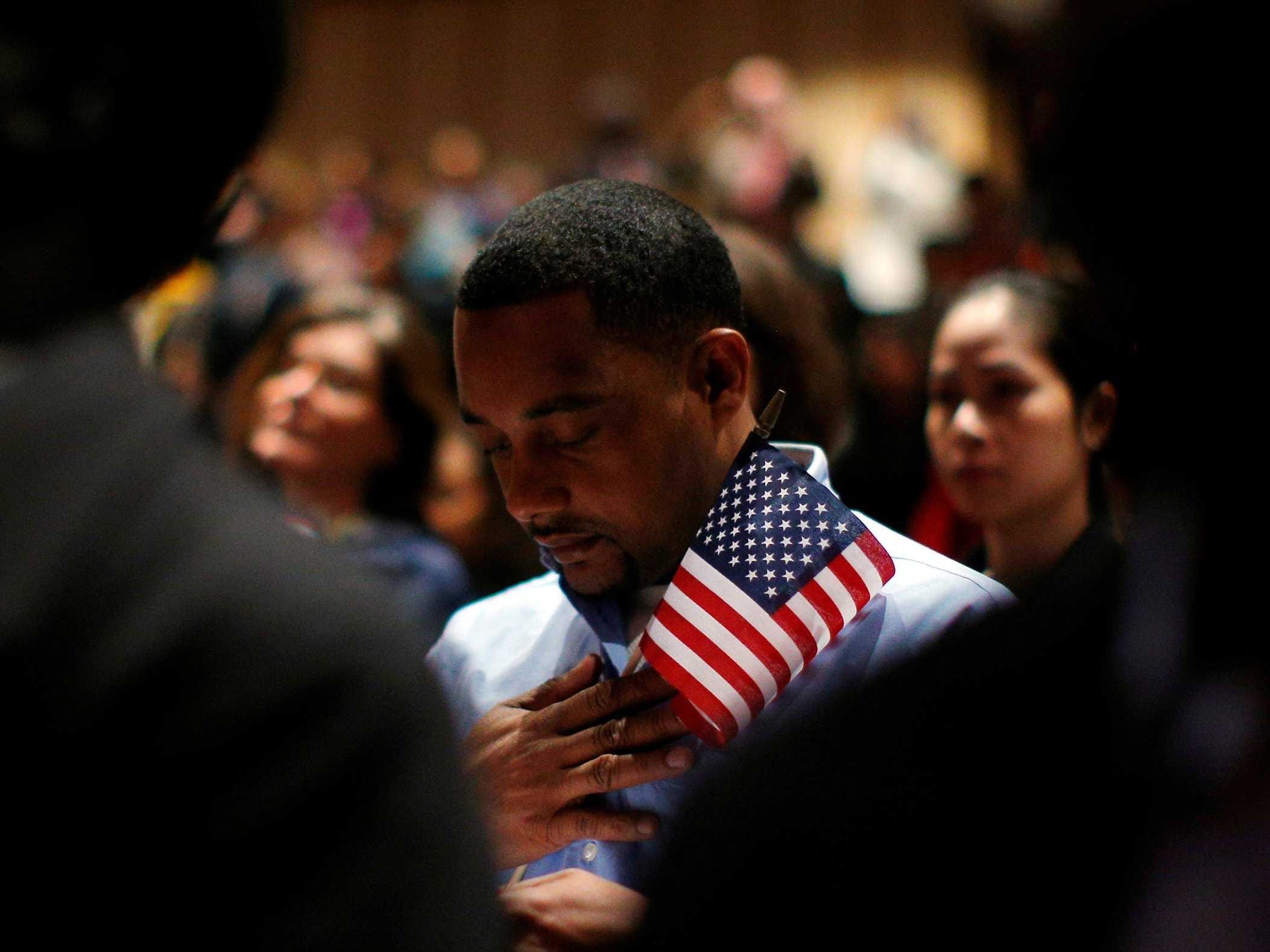 REUTERS/Brian SnyderHe stood for the invocation with his flag.

Stallone Laurel Dias recites the pledge of allegiance after taking the oath to become a US citizen in Boston. Scarlet Gammon shares an emotional moment with her husband, George, after taking the oath in Los Angeles in 2017. In the US, you do not have to be a citizen to serve in the military, but you do need a green card, also known as a permanent resident card. While you can enlist in the military, you may have fewer options if you are not a citizen. This group became citizens on September 20, 2017.

Zuyu Nu, who was serving with the US Navy, takes the oath of citizenship at the Statue of Liberty in New York City. In 2018, 142 citizenship candidates from 33 countries took their Oath of Allegiance in Miami. APA naturalization ceremony at the US Citizenship and Immigration Services Miami Field Office.

Also that year, new citizens smiled during the pledge of allegiance at the New York Public Library in Manhattan. They smiled during the naturalization ceremony on July 3, 2018.

Another smiling group raises their hand to take the Naturalization Oath of Allegiance during a ceremony in Salem, Massachusetts. 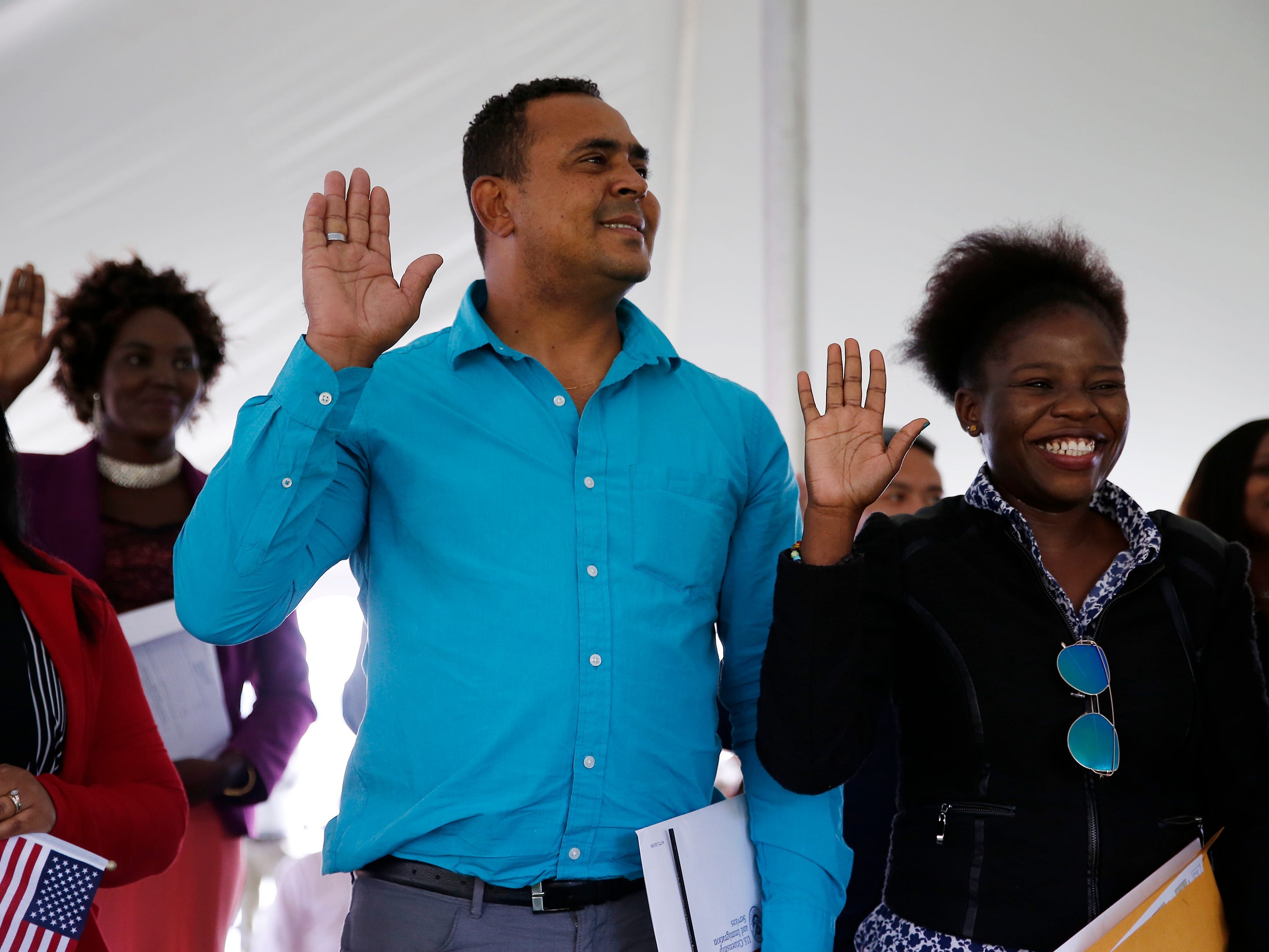 Jessica Rinaldi/The Boston Globe via Getty ImagesA group of immigrants hold their American flags as they prepare to become citizens.

This ceremony was hosted at the House of the Seven Gables in Salem, Massachusetts, on September 17, 2019.

This duo captured a selfie of the special moment. A group in New Jersey gathers to shake hands during a ceremony. A woman in New York clutches her American flag as she recites the pledge. 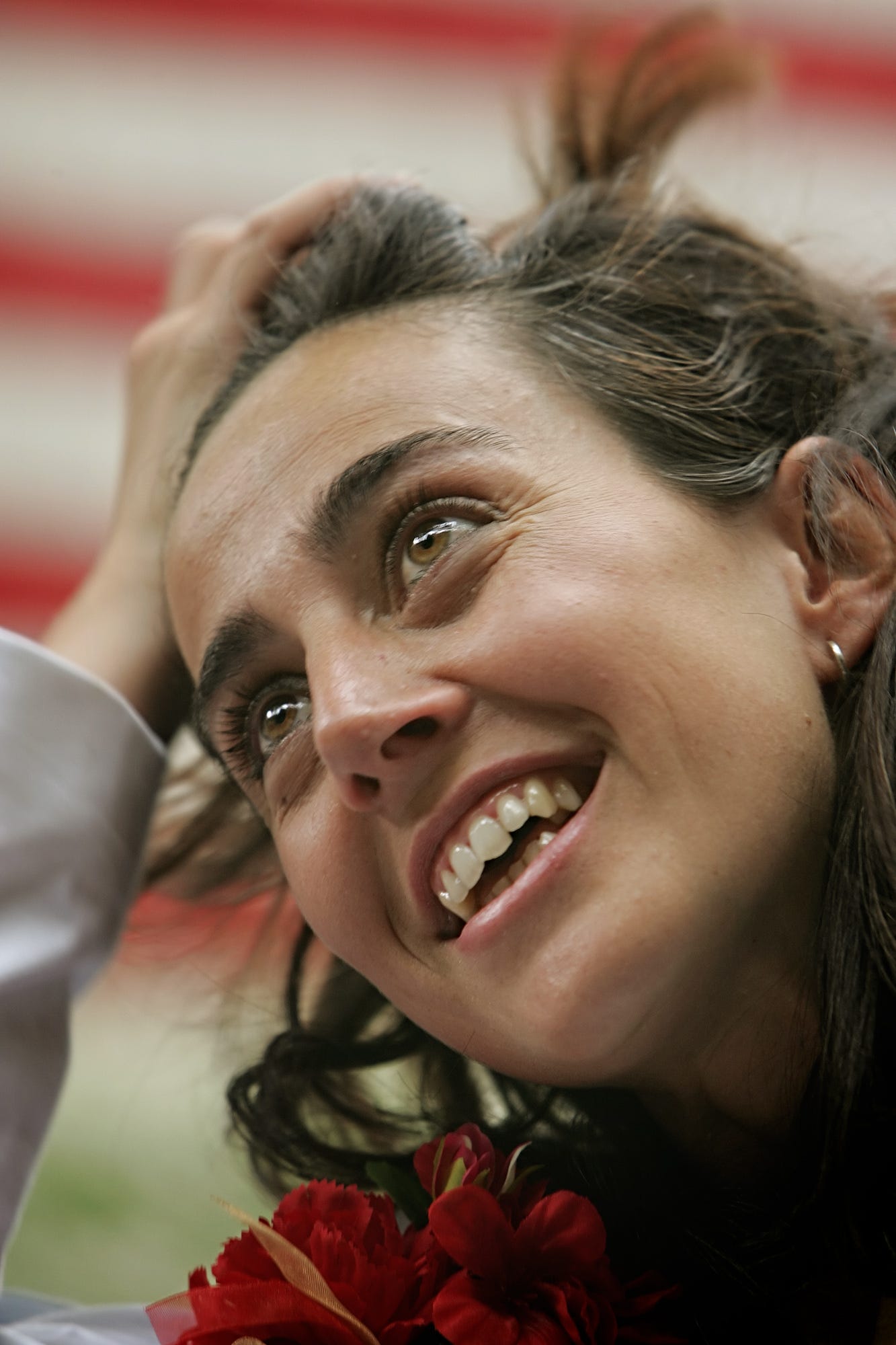 APShe took her oath of citizenship at the Betsy Ross House in Philadelphia.

The El Paso County Coliseum in Texas hosted hundreds of immigrants for their naturalization ceremony in 2019. 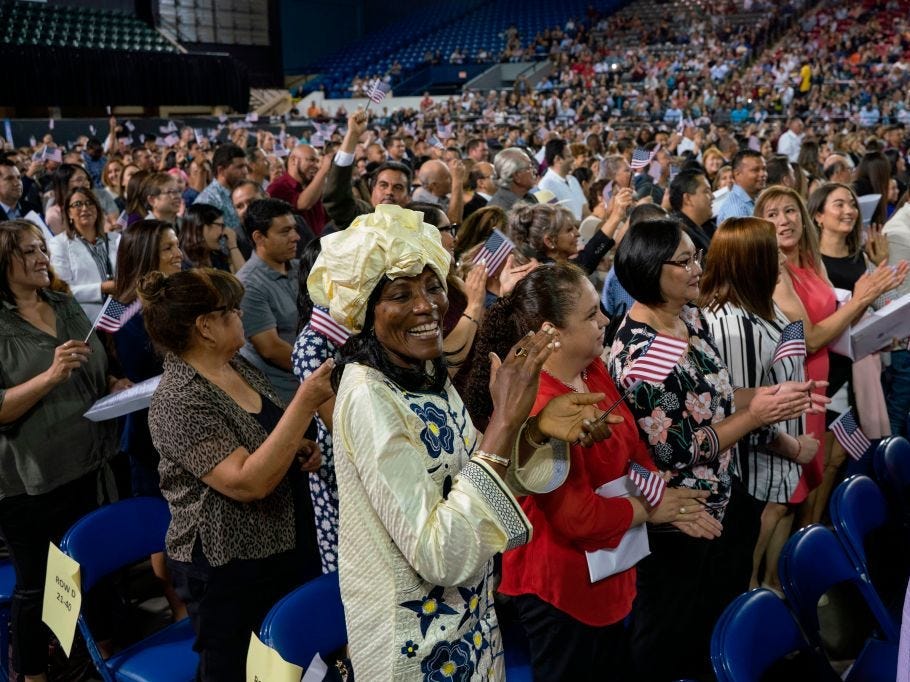 PAUL RATJE/AFP via Getty ImagesCountries from all over the world were represented in the crowd.

In Salt Lake City, a woman wipes a tear away as she is sworn in as a US citizen. 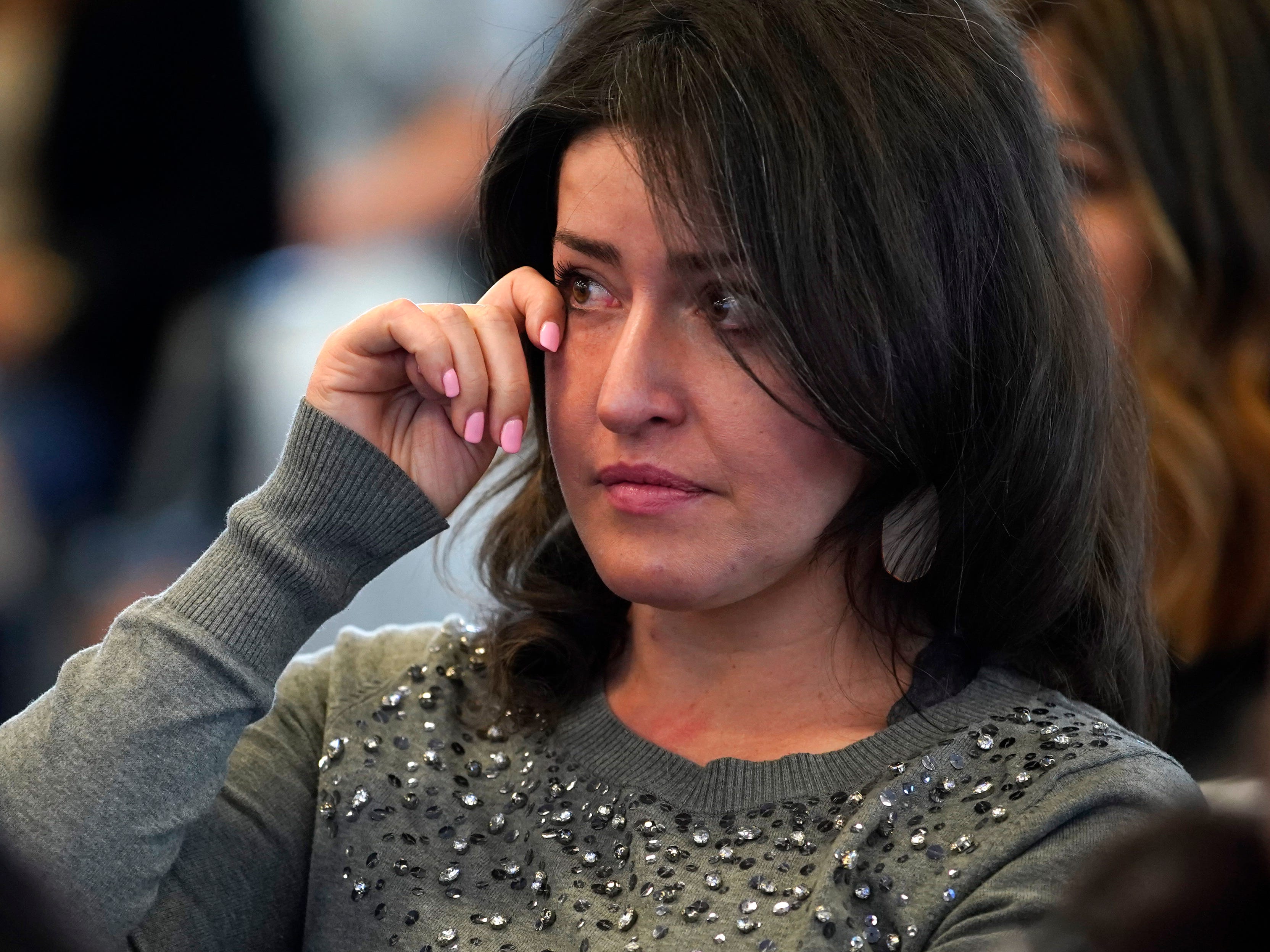 Forty-nine people from 26 countries became US citizens during this ceremony held on April 10, 2019 in Salt Lake City, Utah.

Amid the COVID-19 pandemic, US Citizenship and Immigration Services had to host drive-in naturalization ceremonies to help stop the spread of the virus. 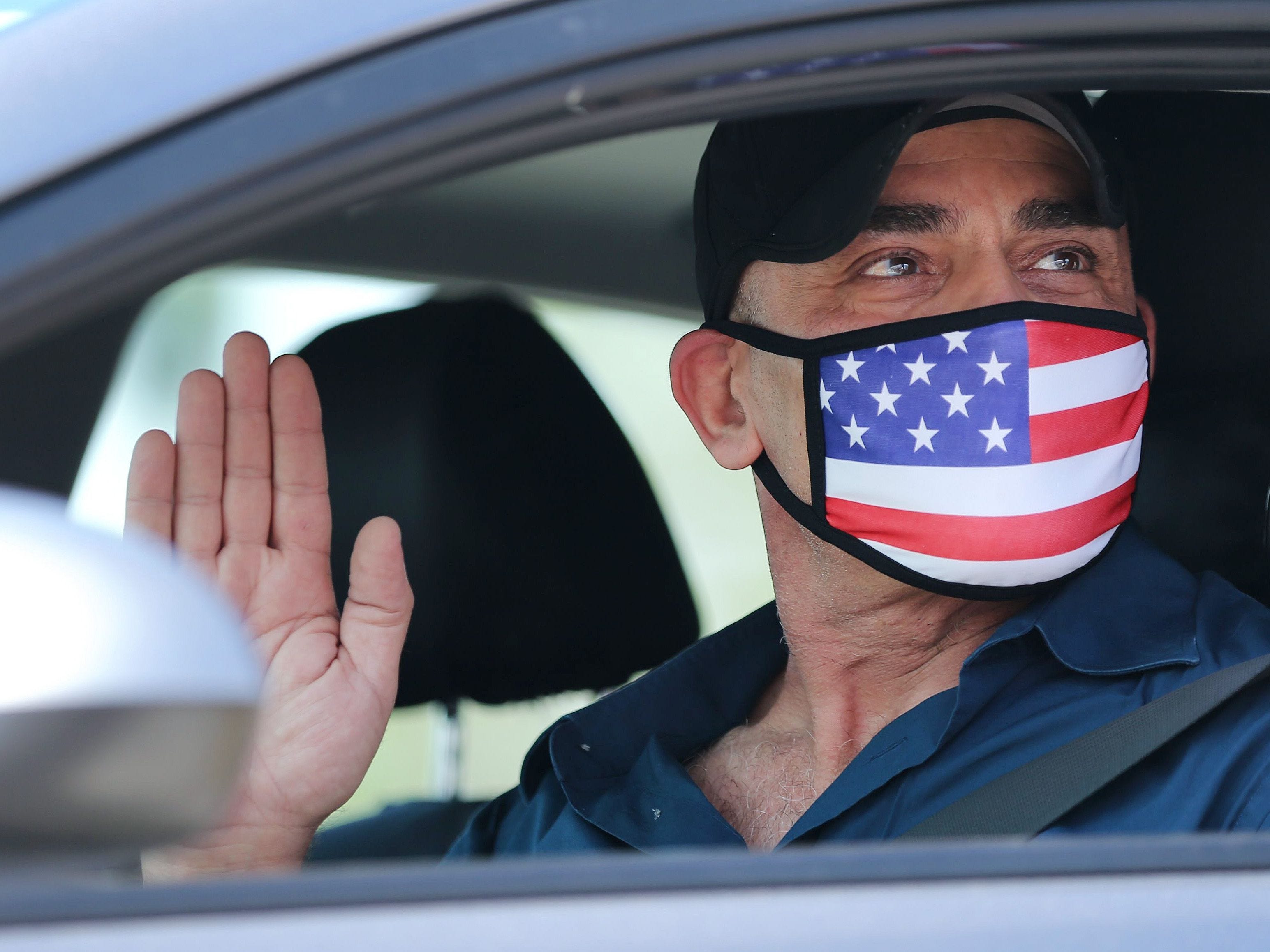 On July 29, 2020, 268 immigrants attended a drive-in ceremony in Santa Ana, California, including Omar Abdalla, who is originally from Palestine. In-person ceremonies had been suspended for three months to slow the spread of COVID-19 and protect residents. 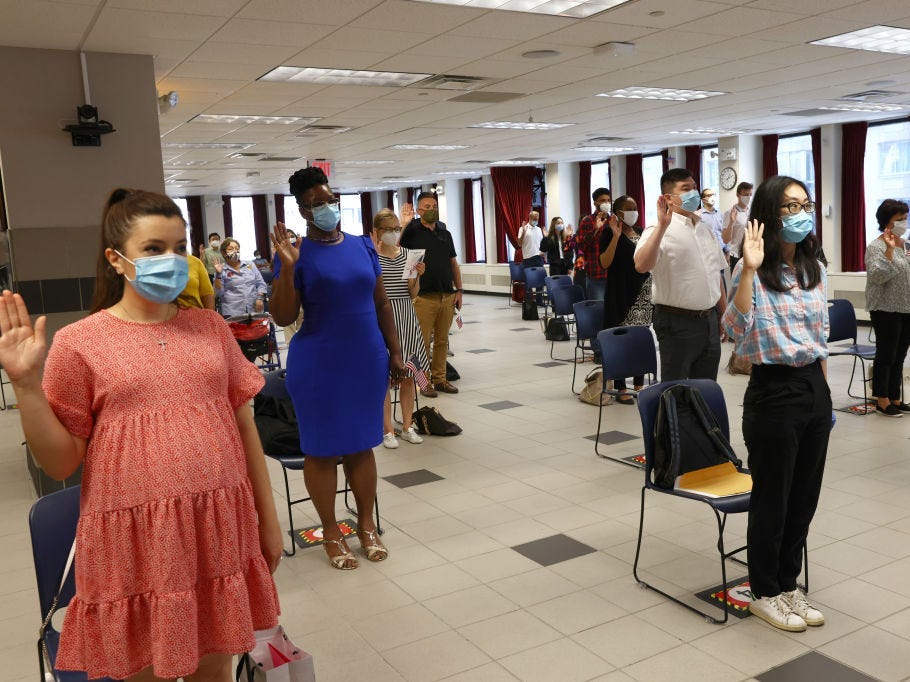 This naturalization ceremony took place in the US Citizenship and Immigration Services’ Brooklyn field office on July 22, 2020.

Margaret Marwieh, who came to the US from Liberia, attends a socially distanced ceremony in Minneapolis. 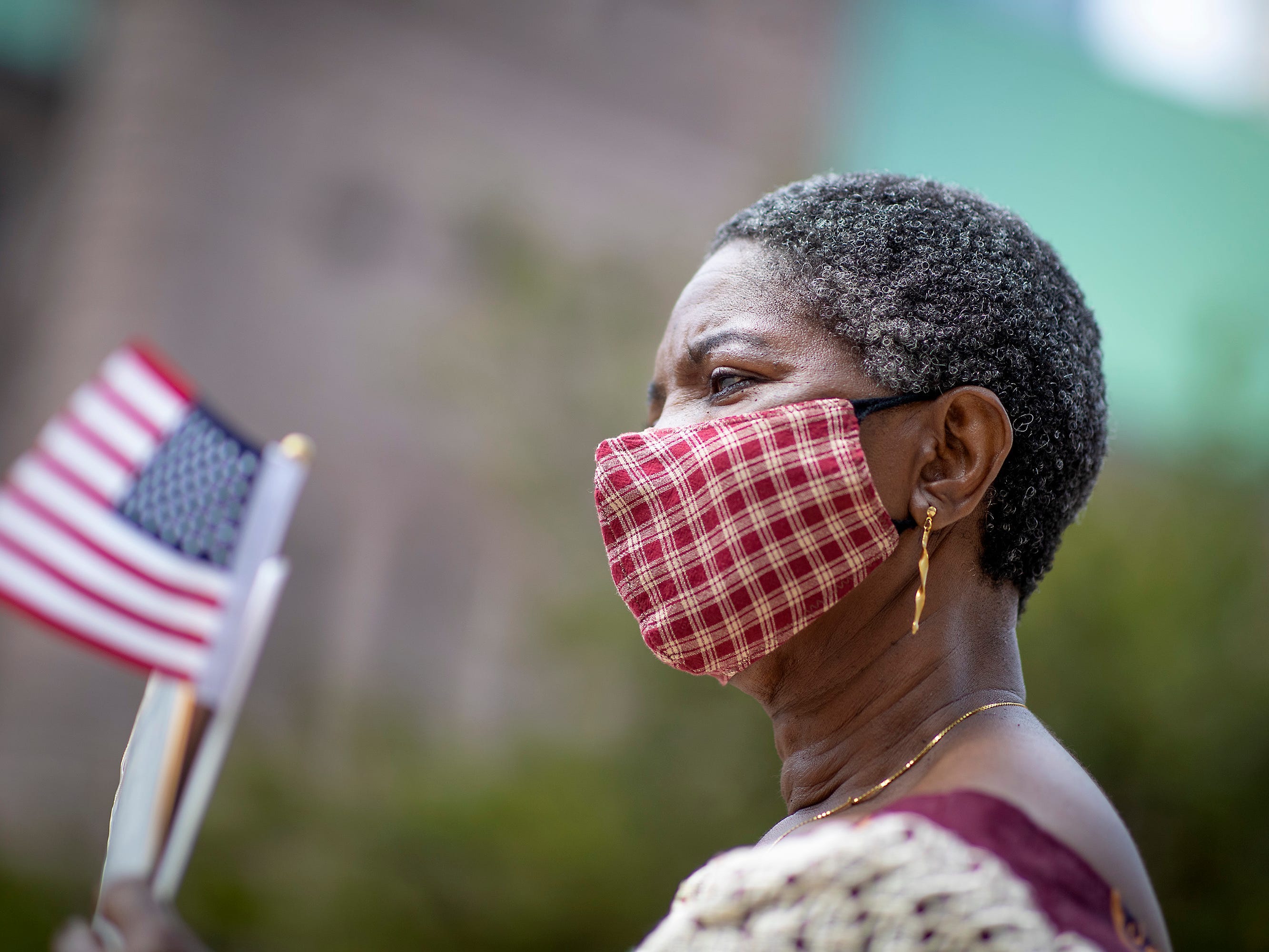 Elizabeth Flores/Star Tribune via Getty ImagesMarwieh wears a mask to a 2020 ceremony.

Usually held in large groups, this time, the ceremony hosted only ten immigrants, who were safely spaced outside in Minneapolis, Minnesota on May 27, 2020.