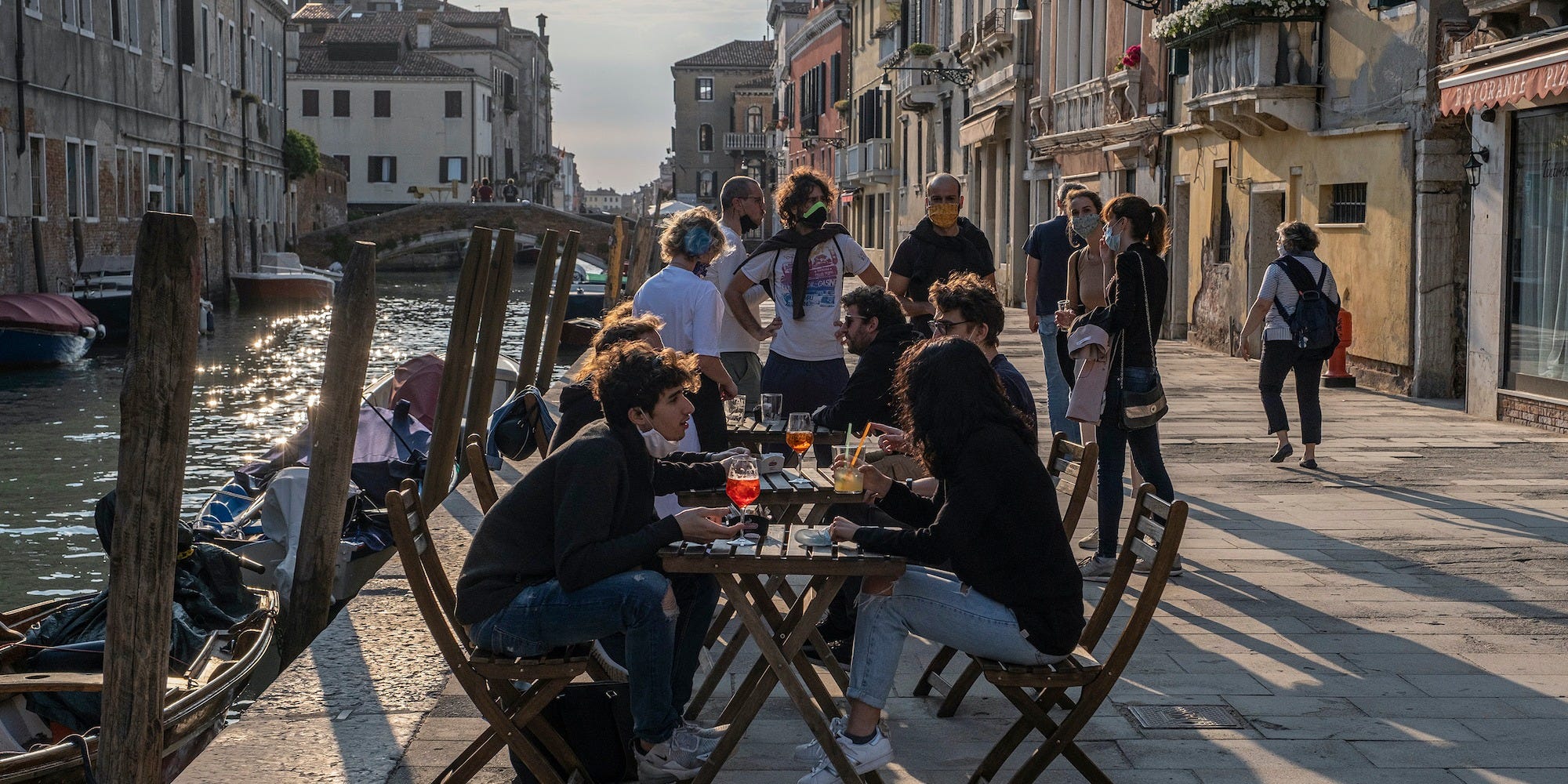 Stefano Mazzola/Awakening/Getty ImagesVenetians drink the aperitif in a bar on May 20, 2020 in Venice, Italy. Restaurants, bars, cafes, hairdressers and other shops have reopened, subject to social distancing measures, after more than two months of a nationwide lockdown meant to curb the spread of Covid-19.

Just three months ago, Europe was seen as the epicentre of the coronavirus pandemic, where infections and death rates soared across Italy, Spain, Germany, and France.

But the tables have turned. Now, the US leads the world in its coronavirus outbreak, and European countries have begun easing their lockdown restrictions and reopening borders.

Across the continent, businesses, restaurants, and shops have reopened, while coastlines and parks buzz with crowds of people. In mid-June, numerous countries – including France, Germany, Italy, and Belgium – opened their borders to fellow Europeans and encouraged a return of tourism.

On July 1, the European Union is set to open up its borders to international travel. But the EU is considering barring Americans from entering its member states due to the United States’ failure to control the outbreak.

These photos show what life is starting to look like in Europe, as countries ease away from lockdown orders.

Italy, the country once hit hardest by the pandemic, began slowly reopening its economy as early as mid-April. By May 18, beaches, shops, restaurants, and church services were able to reopen with social distancing guidelines. 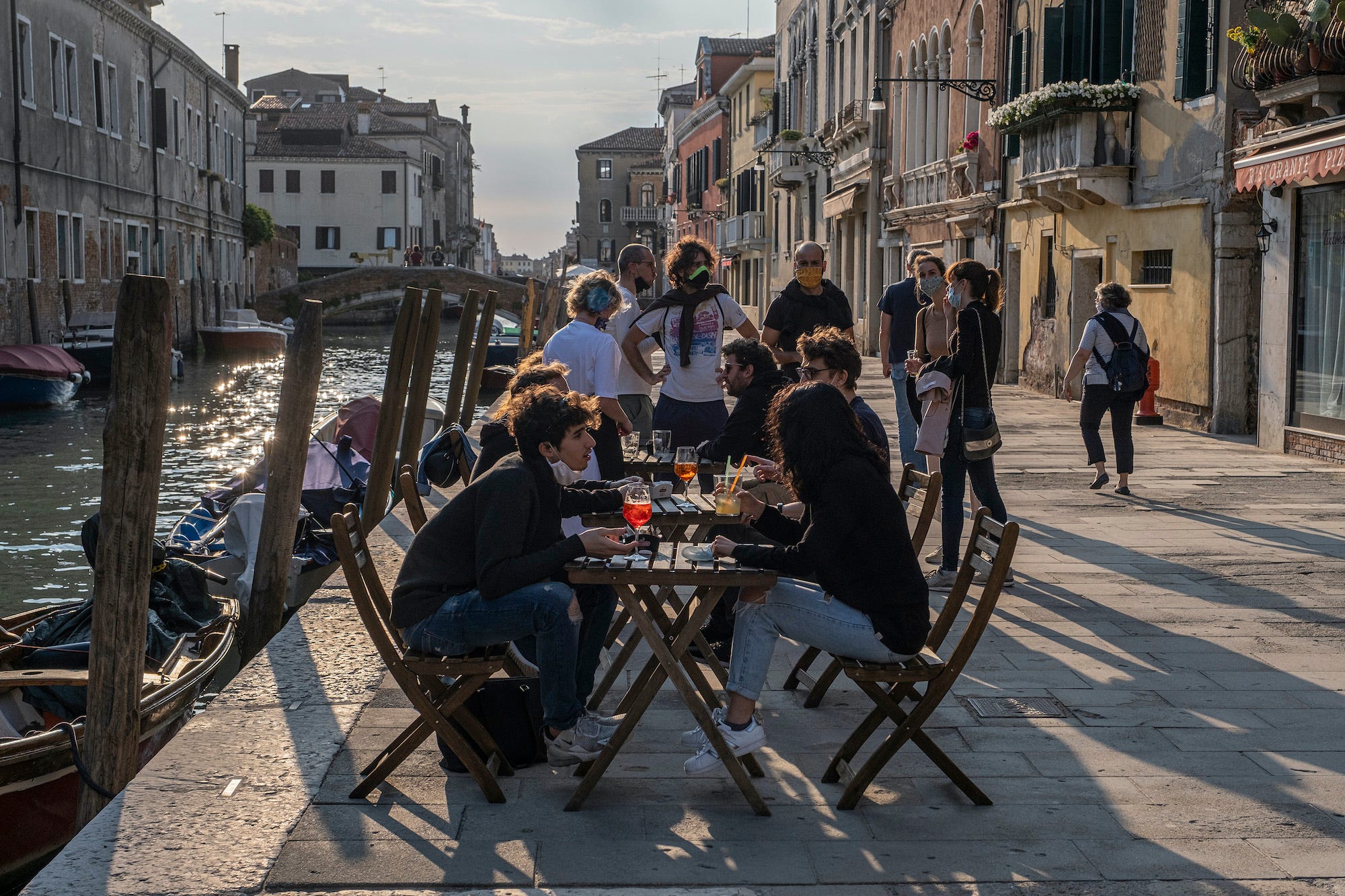 Stefano Mazzola/Awakening/Getty ImagesVenetians drink the aperitif in a bar on May 20, 2020 in Venice, Italy.

Since the beginning of summer, Italians have been seen flocking to the coast, revisiting museums, and dining out again. 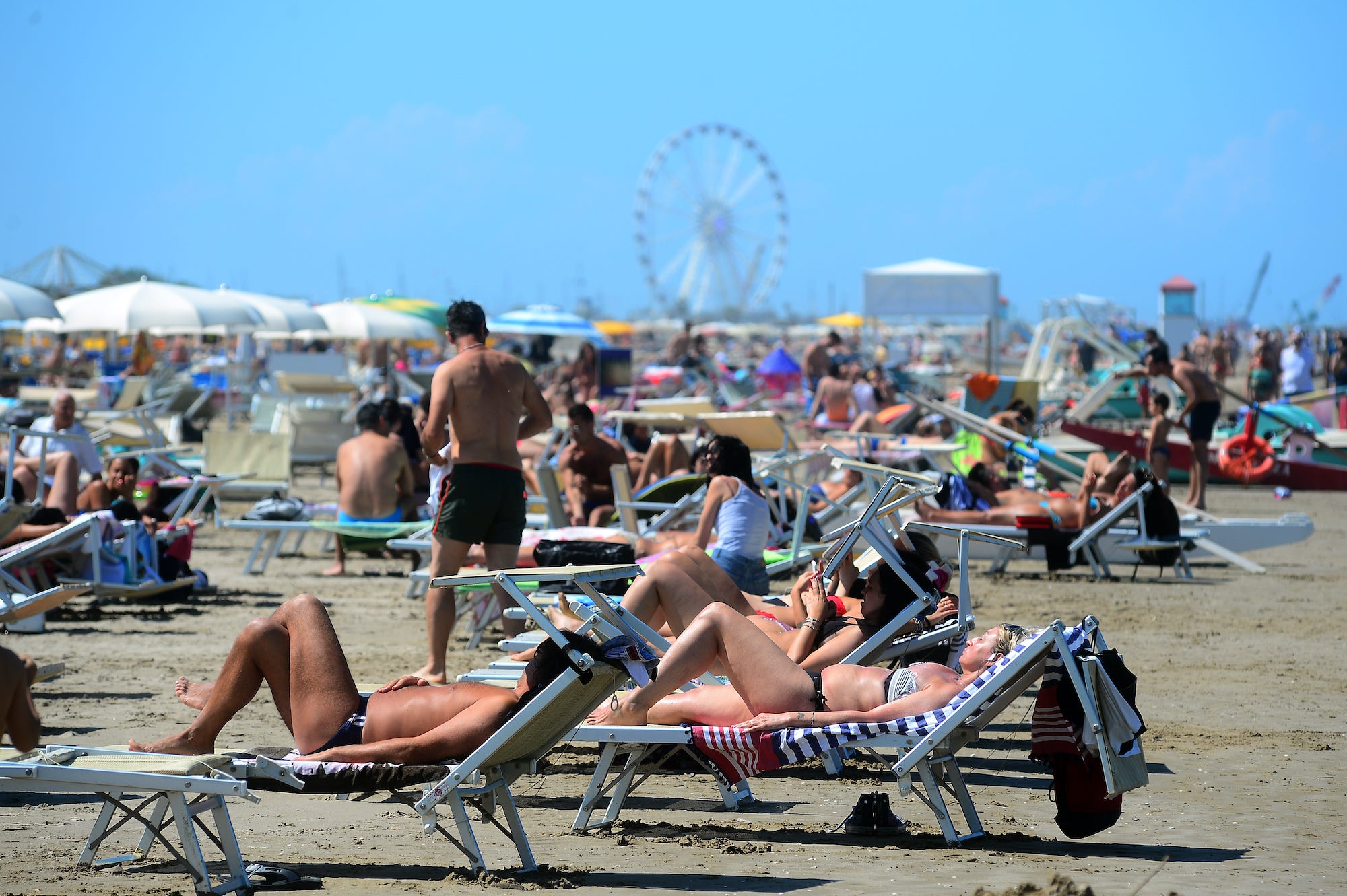 Roberto Serra – Iguana Press/Getty ImagesPeople visit Rimini beach on June 02, 2020 in Bologna, Italy. Many Italian businesses have been allowed to reopen, after more than two months of a nationwide lockdown meant to curb the spread of Covid-19.

But as the country begins returning to normalcy, Italians are worried that a reluctance for tourists to travel this summer will continue to hurt its economy. In this photo, tourism workers are seen protesting for more government assistance. 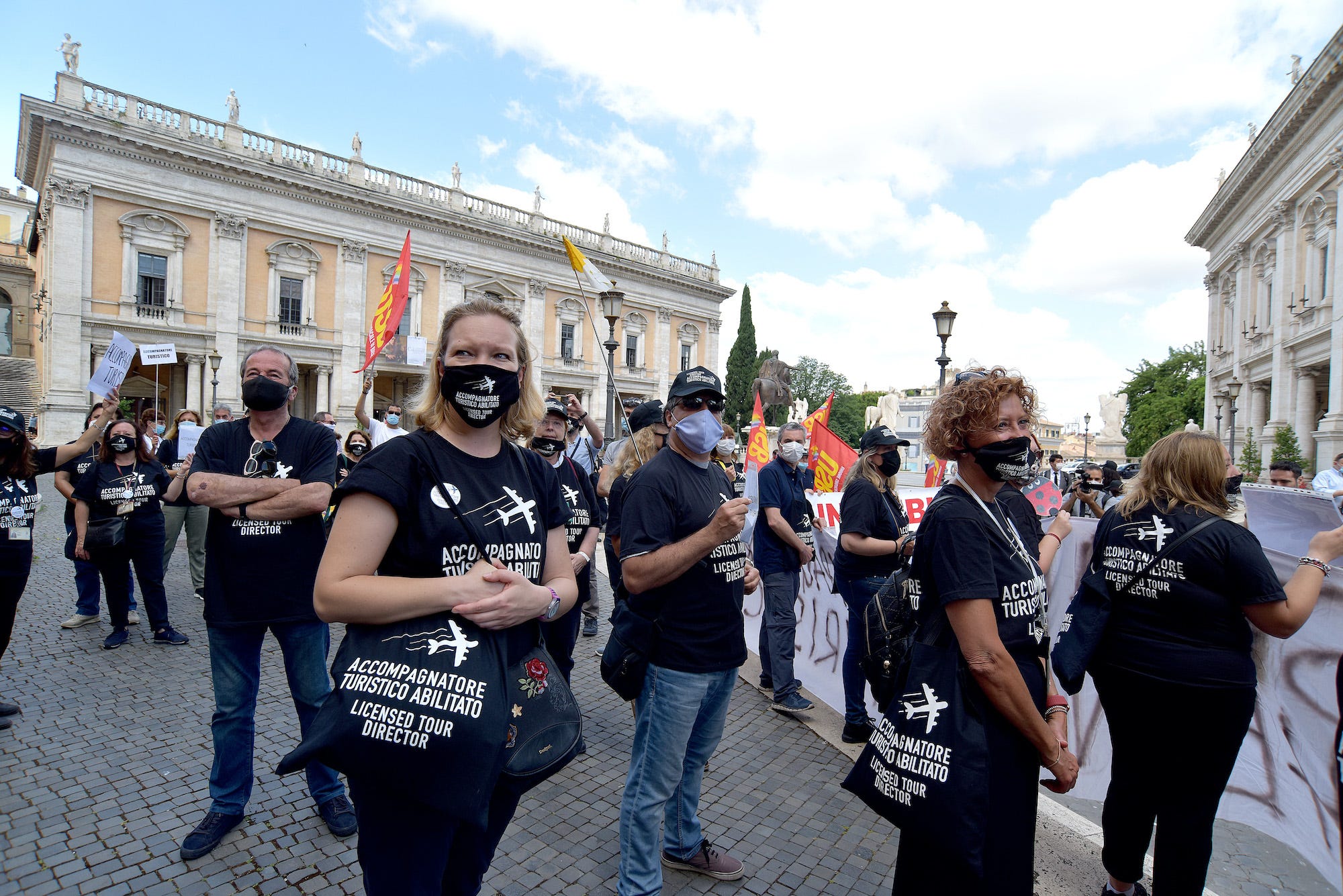 Simona Granati – Corbis/Corbis via Getty ImagesTourism workers protest in the Campidoglio to demand guaranteed income and a ban on dismissal until the tourism sector in serious crisis with the pandemic and lockdown has fully recovered, on June 15, 2020 in Rome, Italy

Spain, the country with the highest number of coronavirus deaths in Europe, began reopening in phases starting in April after a strict national lockdown. Here, crowds of people are seen sunbathing off the coast of Barcelona. 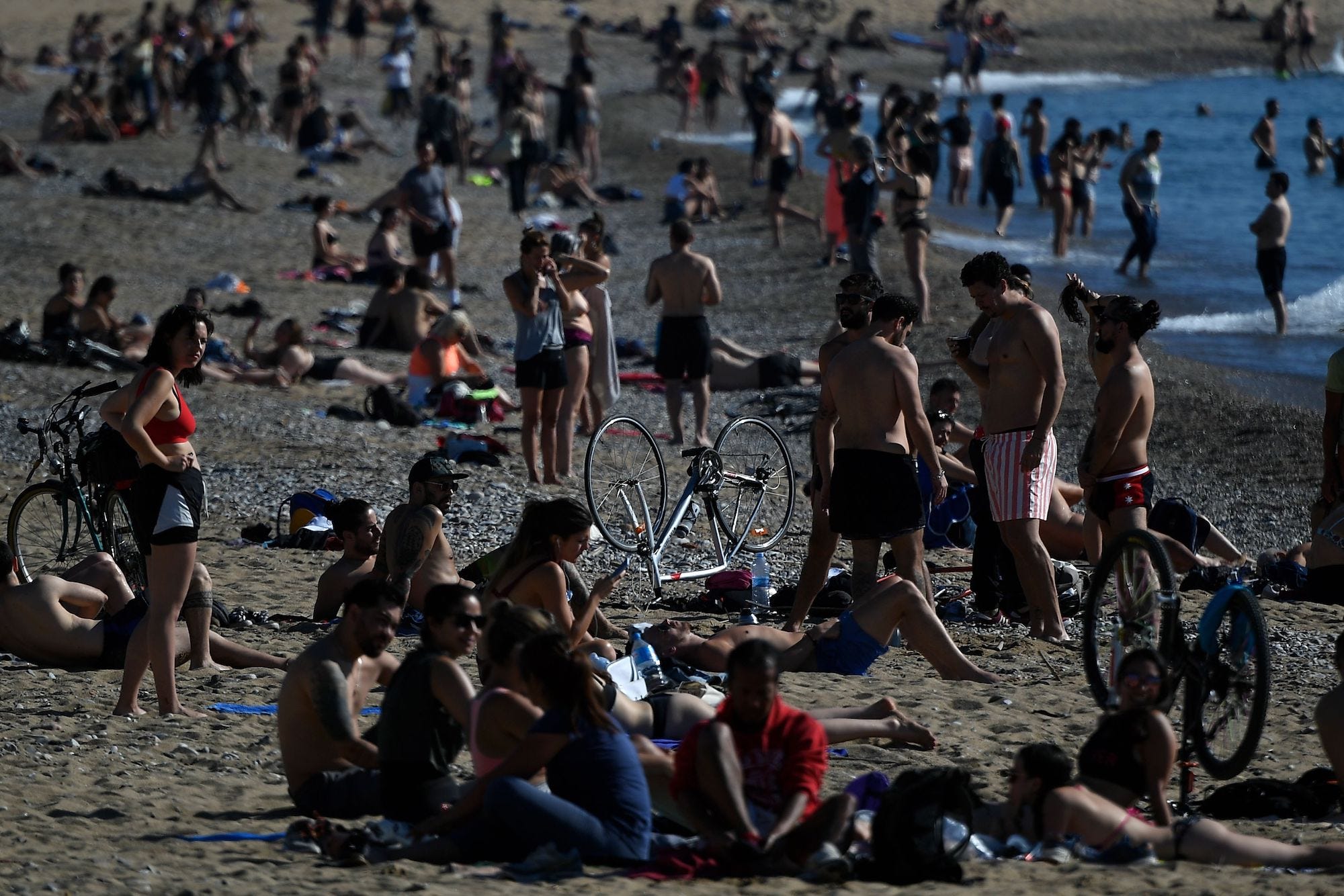 LLUIS GENE/AFP via Getty ImagesPeople sunbathe at the Barceloneta beach in Barcelona on May 20, 2020 during the hours allowed by the government to exercise, amid the national lockdown to prevent the spread of the COVID-19 disease.

At the end of June, life in Spain began to transition into what the government calls “a new normal,” which allows public life and businesses to operate with new safety measures. In this photo, children are seen on a playground in Madrid for the first time in nearly 100 days. 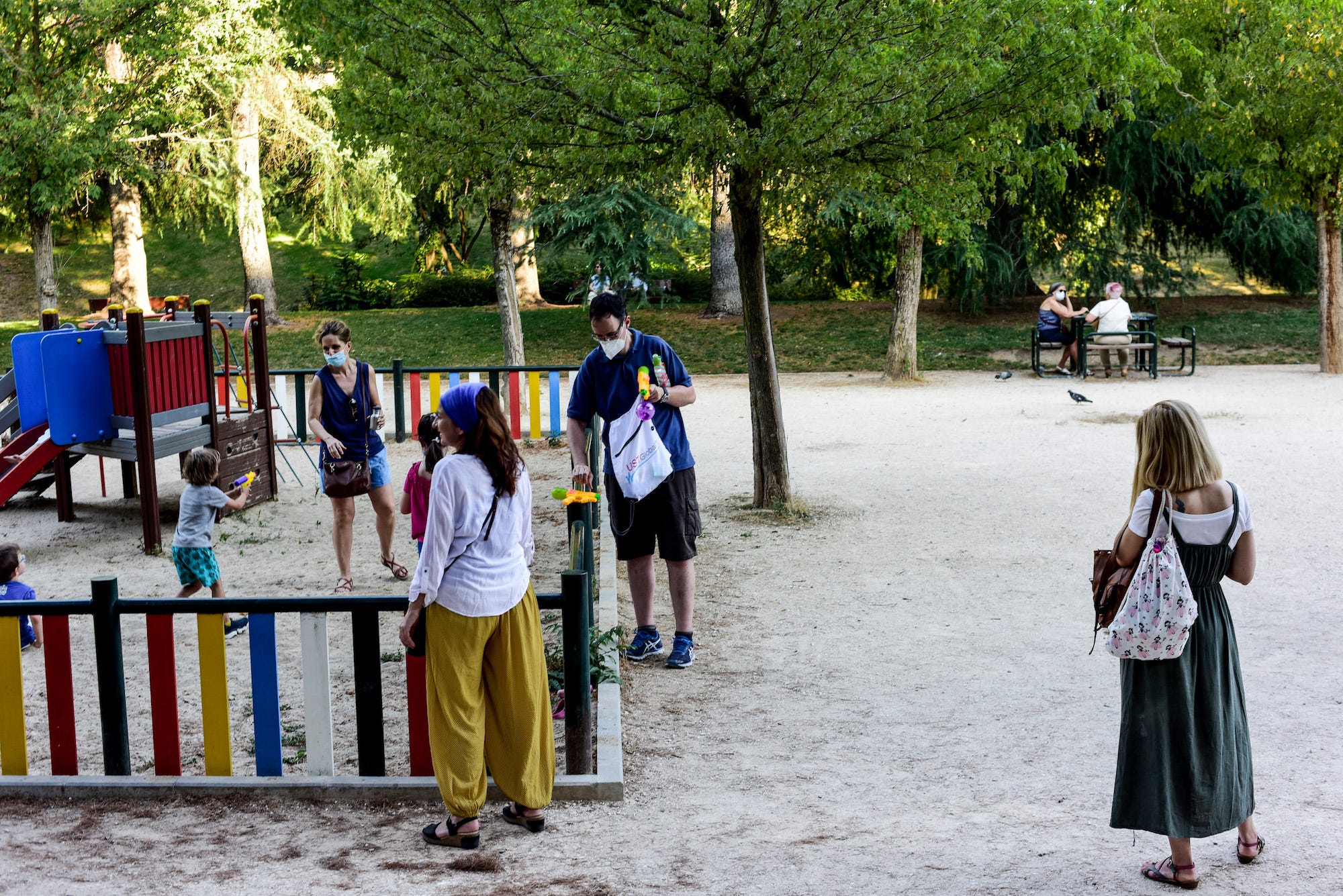 Ely Pineiro/Getty ImagesPeople supervise their children from outside of the playground on June 23, 2020 in Madrid, Spain. From today children’s playgrounds reopen in Madrid after almost one hundred days closed because of the coronavirus crisis.

On June 21, the country lifted its 3-month long national state of emergency, and is now allowing Spanish residents to travel freely across Europe. Members of the EU and Britain can now enter the country as well. 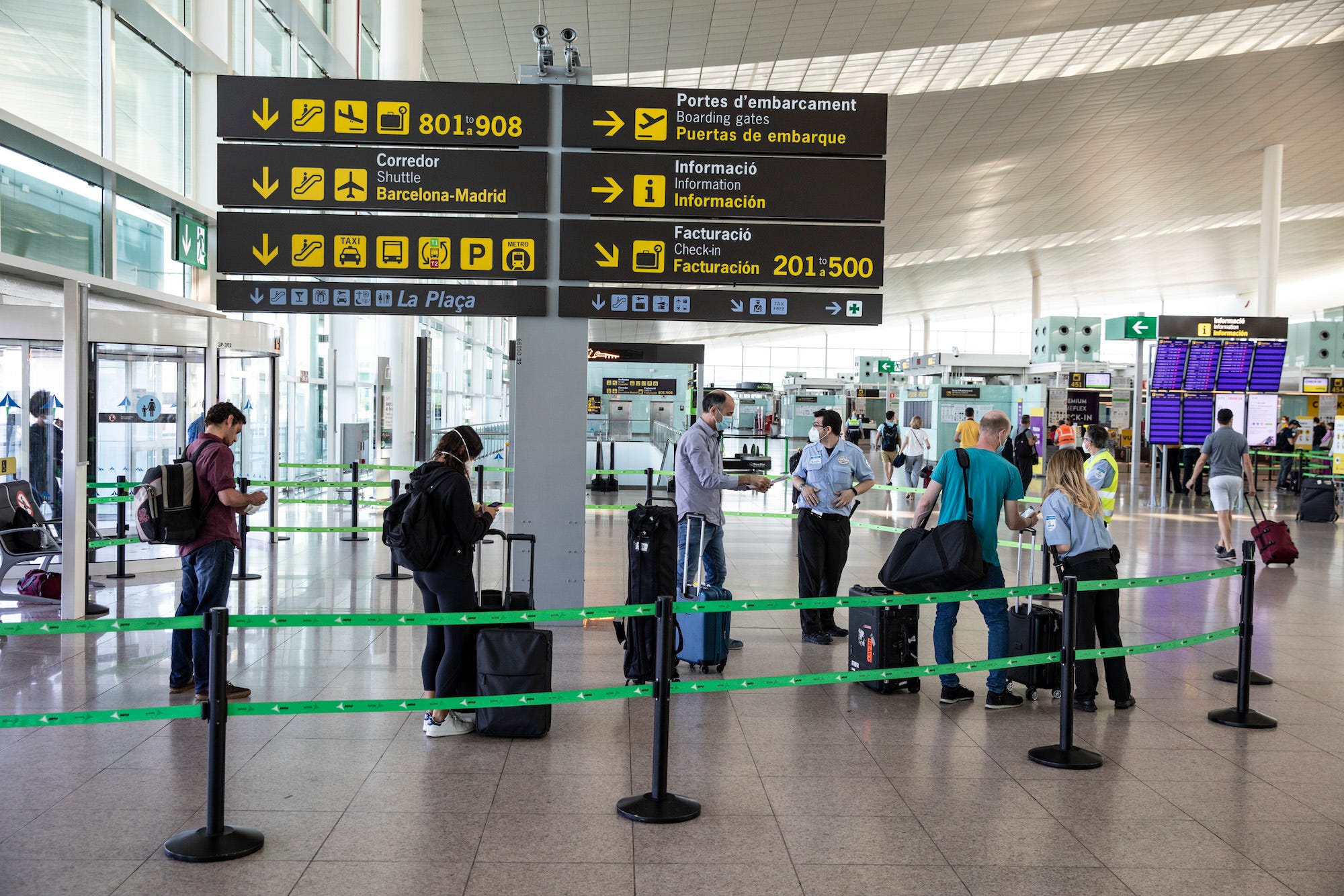 Xavier Bonilla/NurPhoto via Getty ImagesPassengers at Barcelona el Prat airport during the reopen to European and Schengen area tourists.

In France, bars and restaurants began to reopen at the beginning of June. Starting on June 22, cinemas and theatres have been able to resume business with social distancing guidelines. In this photo, people are seen having drinks and riding bikes outside. 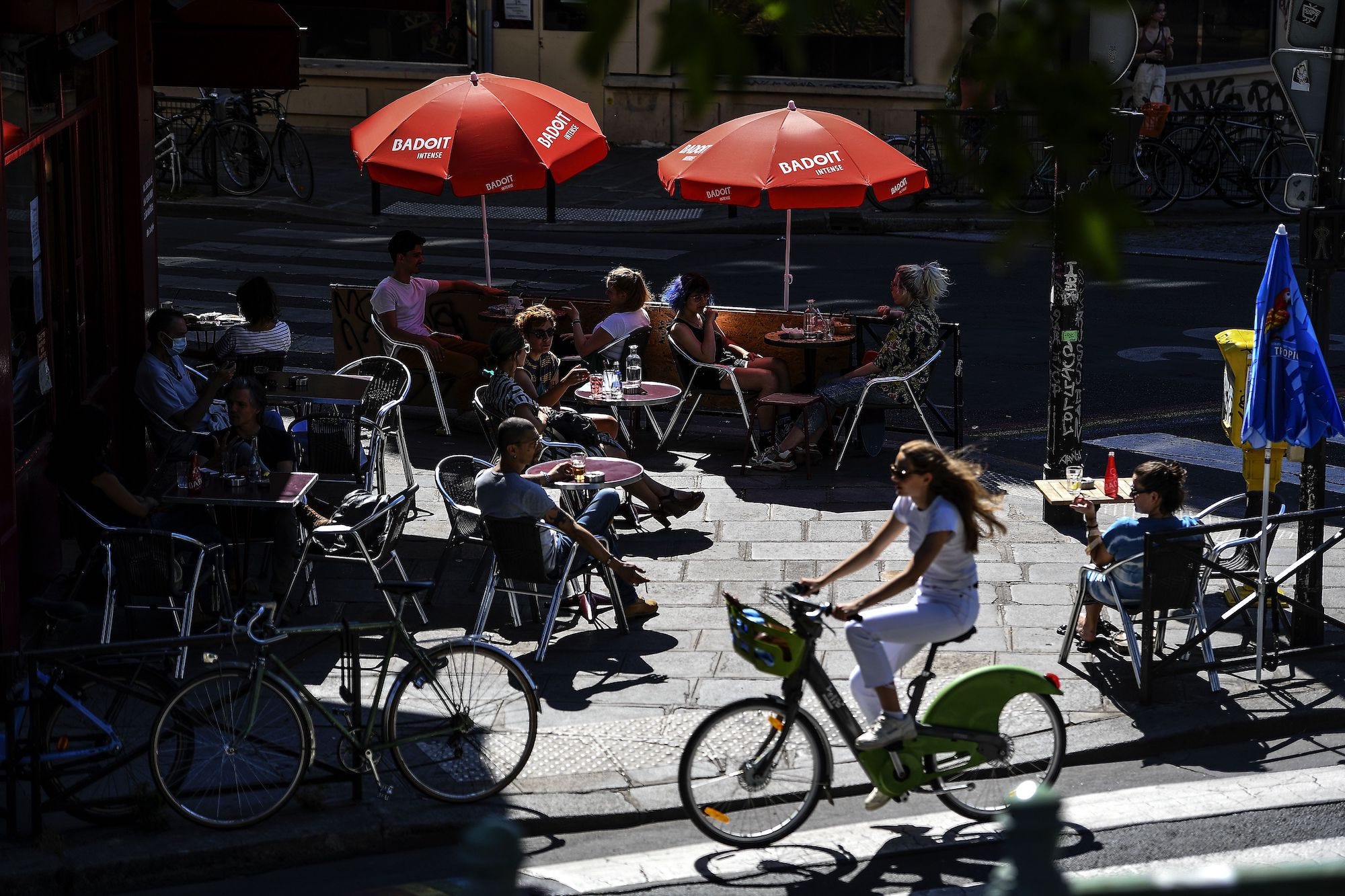 CHRISTOPHE ARCHAMBAULT/AFP via Getty ImagesPeople have drinks at the terrasse of a cafe along the Canal Saint-Martin on a warm and sunny afternoon during a heatwave in Paris, on June 23, 2020 as France eases lockdown measures taken to curb the spread of the Covid-19 pandemic.

Additionally, on June 22nd, French schools began to fully reopen for the first time since March 16. 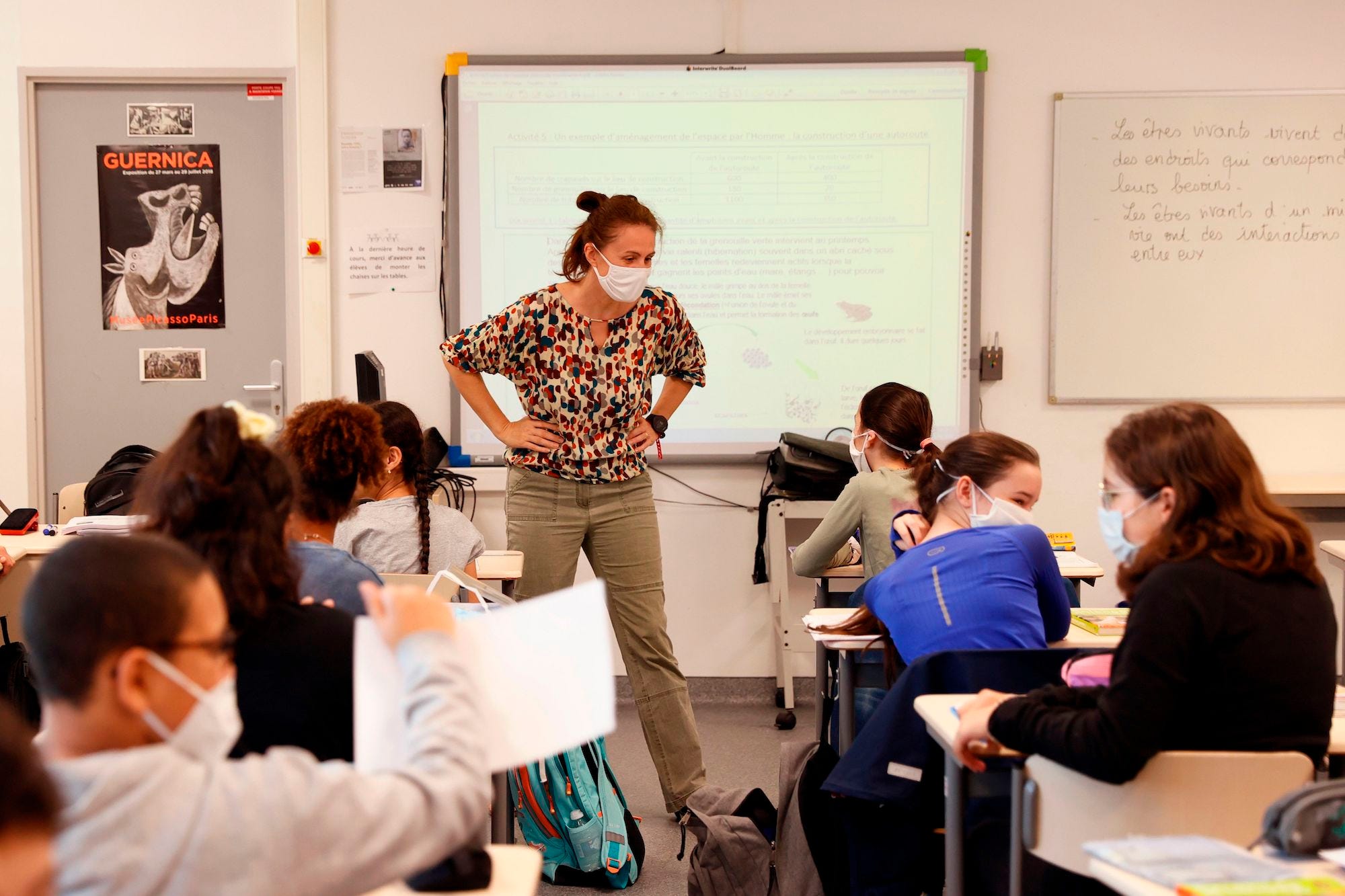 THOMAS SAMSON/AFP via Getty ImagesMiddle school pupils attend a lesson in their classroom, on June 22, 2020 in Boulogne-Billancourt, outside Paris, as primary and middle schools reopen in France.

Here, people are seen enjoying a sunny day on the coast of southern France. 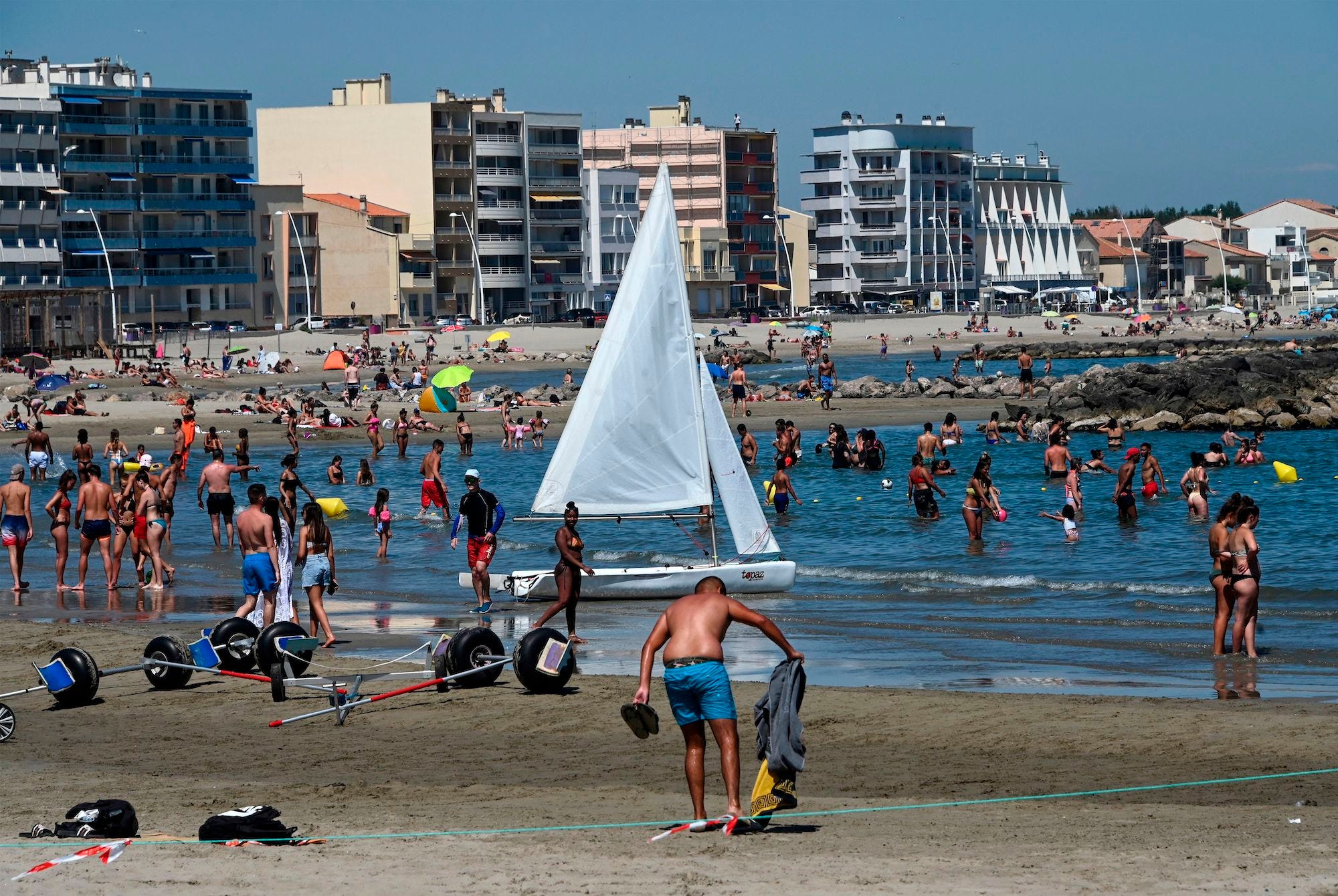 PASCAL GUYOT/AFP via Getty ImagesPeople cool off in the sea during a heatwave at a beach in Palavas-les-Flots, southern France, on June 23, 2020 as France eases lockdown measures taken to curb the spread of the Covid-19 pandemic

In Germany, a strategic and strict reopening plan starting in early May allowed the country to resume nearly every aspect of life. In this photo, people are seen visiting a museum in May. 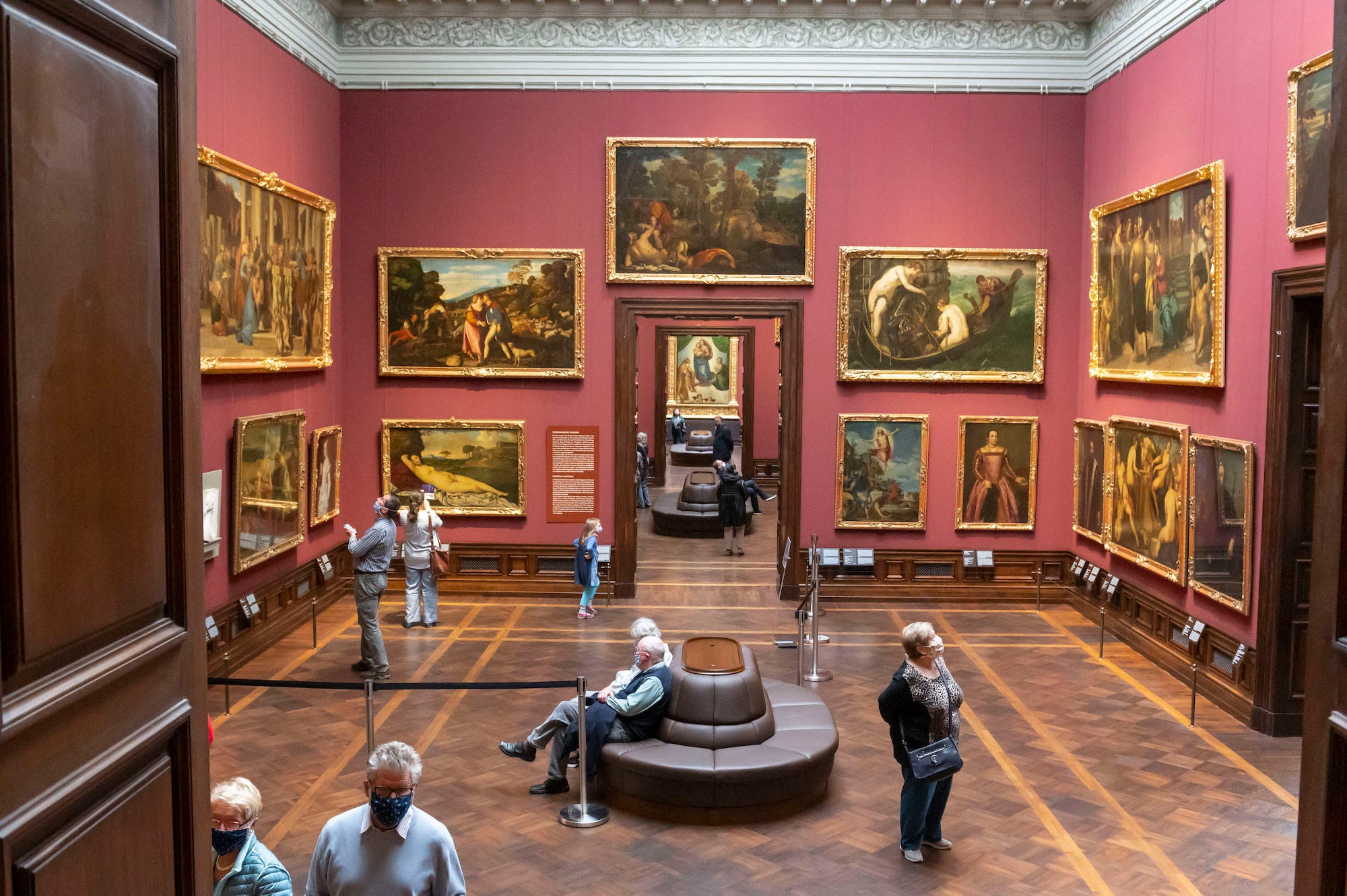 Matthias Rietschel/Getty ImagesVisitors wearing protective face masks view paintings at the Old Masters Gallery at the Zwinger palace complex on the first day the palace reopened to the public during the coronavirus crisis on May 05, 2020 in Dresden, Germany.

Germany’s approach to handling outbreaks has been swift. While much of the country has been able to reopen under social distancing guidelines, the government has reinstated lockdowns for 500,000 people in two districts after a new outbreak hit in June. 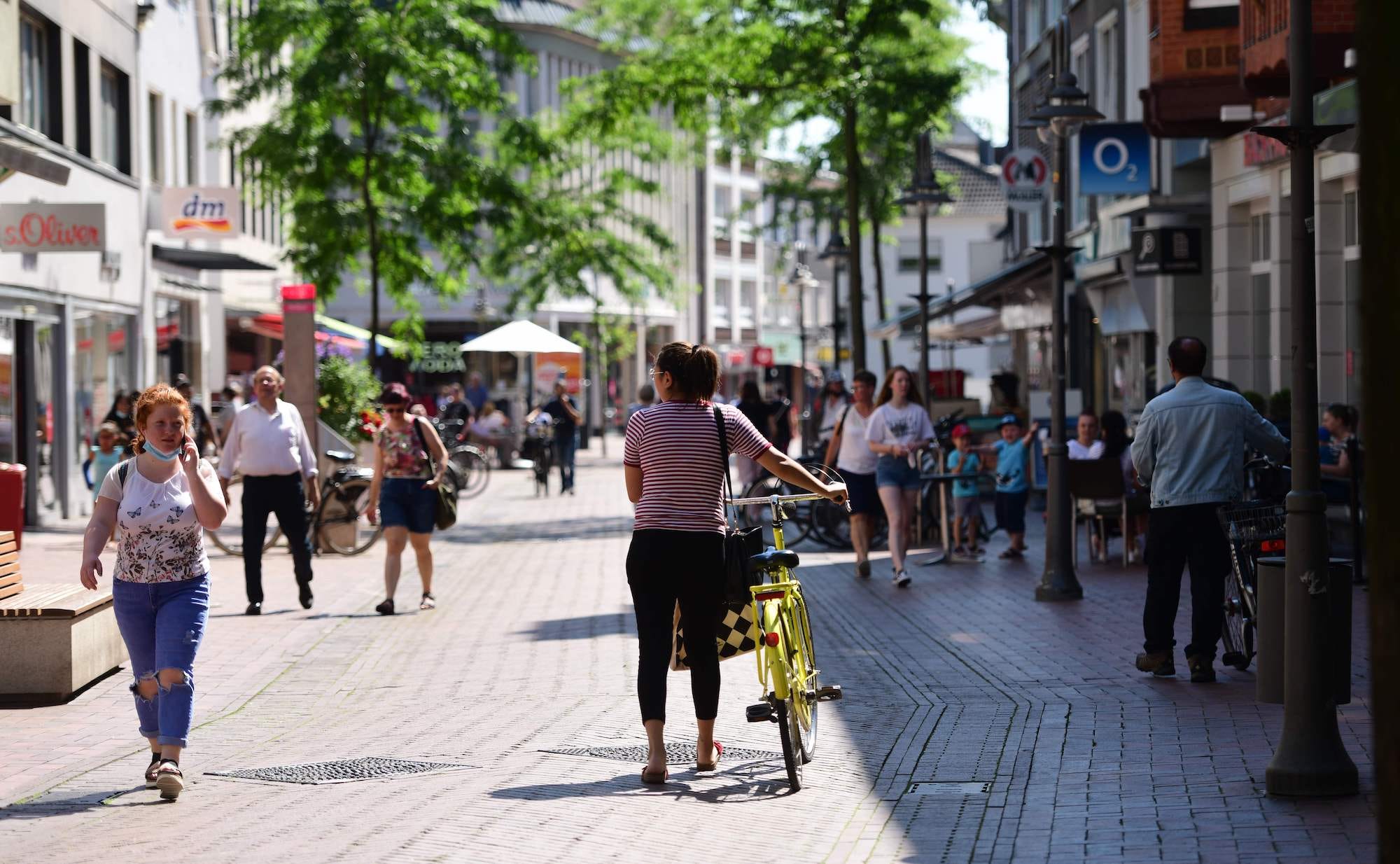 INA FASSBENDER/AFP via Getty ImagesCitizens walk at the pedestrian zone in Guetersloh, western Germany on June 23, 2020.

In Denmark, students began going back to school as early as April 15, making it one of the first European countries to lift school lockdown measures. 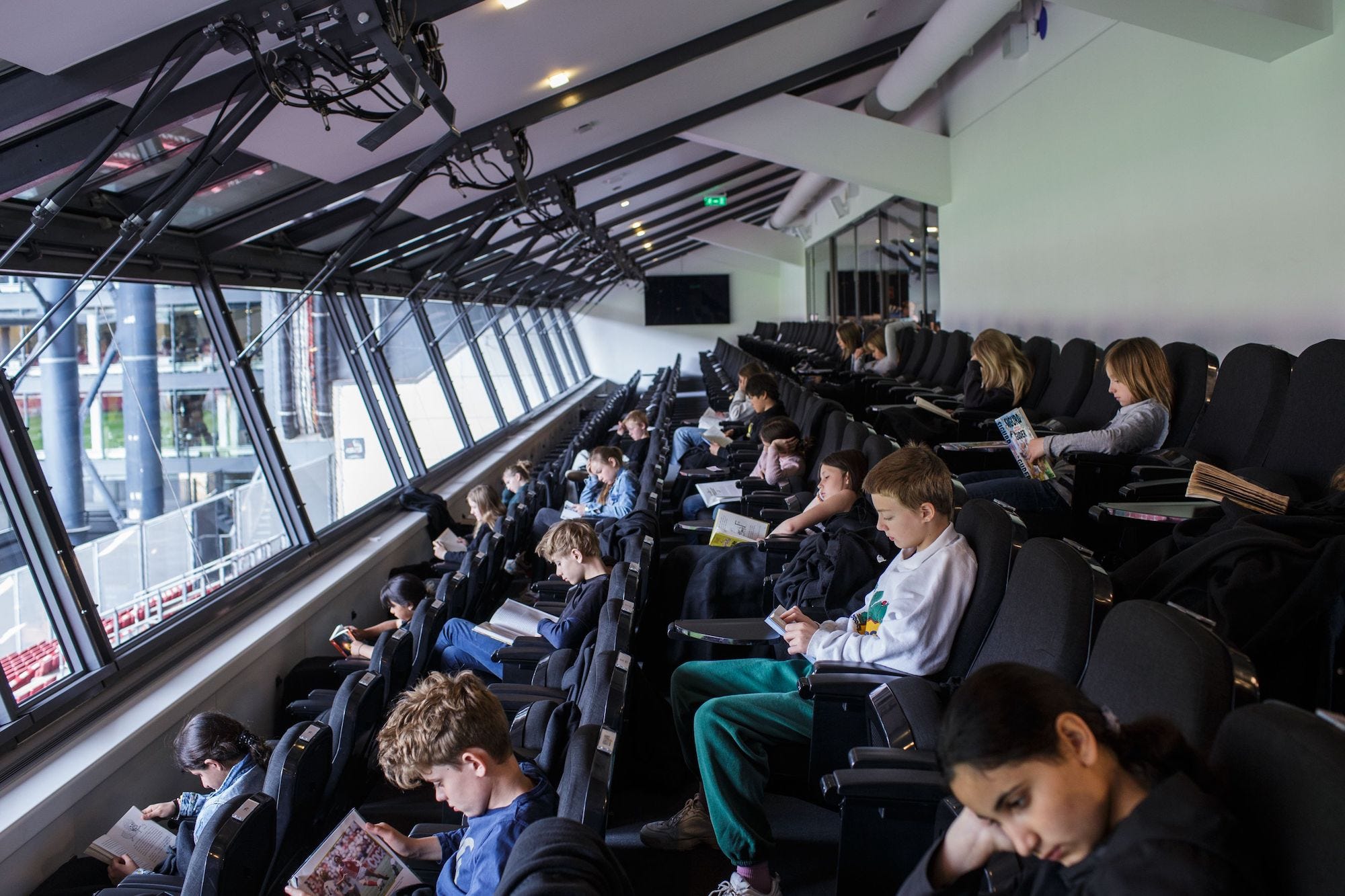 THIBAULT SAVARY/AFP via Getty ImagesChildren attend a class held in the high-class tribune at the Telia Parken stadium in order to keep the social distances amid the new coronavirus pandemic on May 15, 2020 in Copenhagen.

On May 18, restaurants, businesses, and shops began to reopen. One writer in the Guardian described the reopening process as looking nearly identical to life before the pandemic, with only more hand sanitizer and distancing. 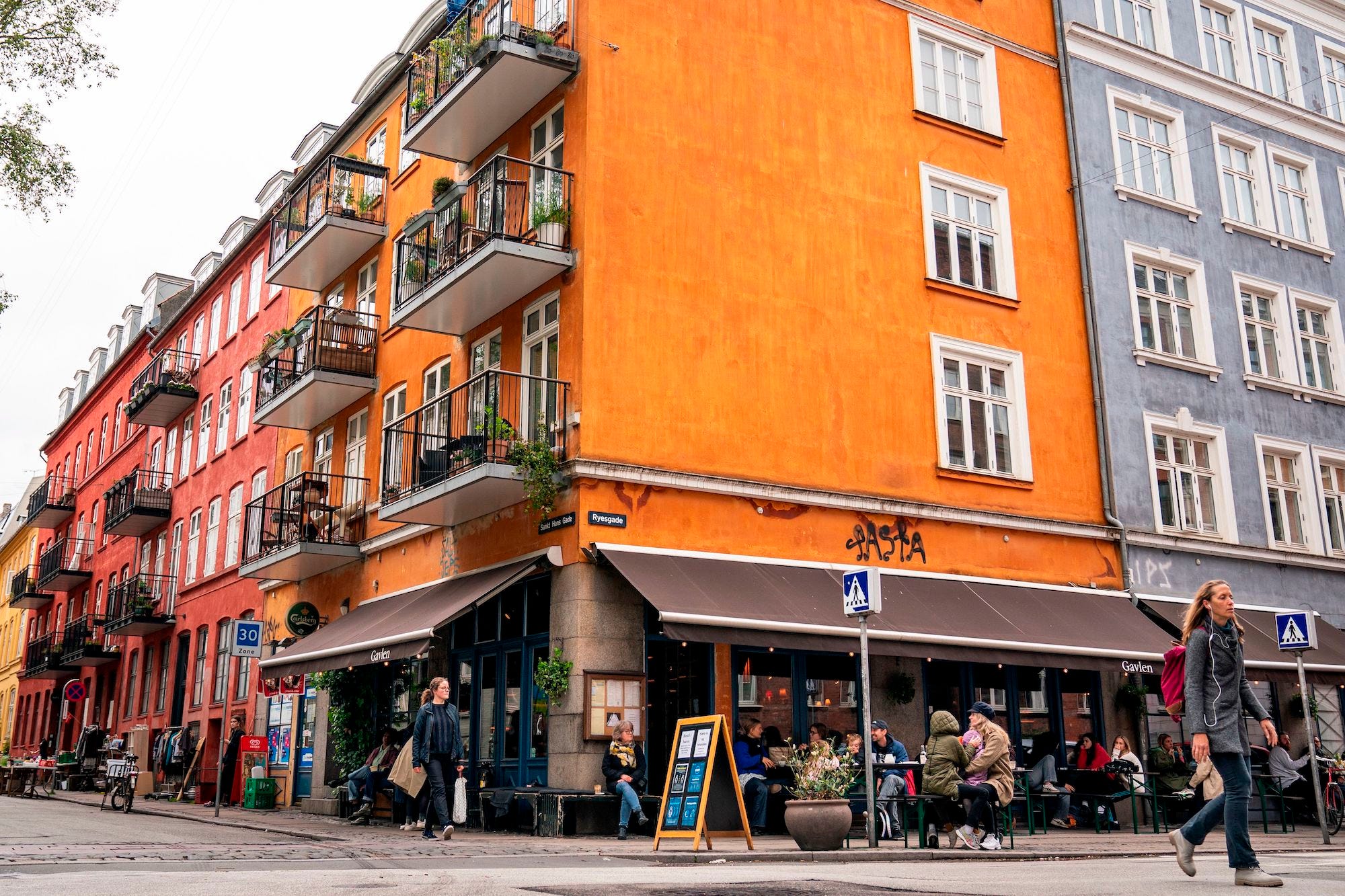 NIELS CHRISTIAN VILMANN/Ritzau Scanpix/AFP via Getty ImagesPeople sit at the terrasse of the Cafe Gavlen after it reopened in Copenhagen on May 18, 2020.

In Belgium, people are seen dining at a restaurant in mid-June after entering phase three of easing lockdown restrictions. The country has allowed shops, hotels, cafes, and restaurants to resume business with social distancing measures. 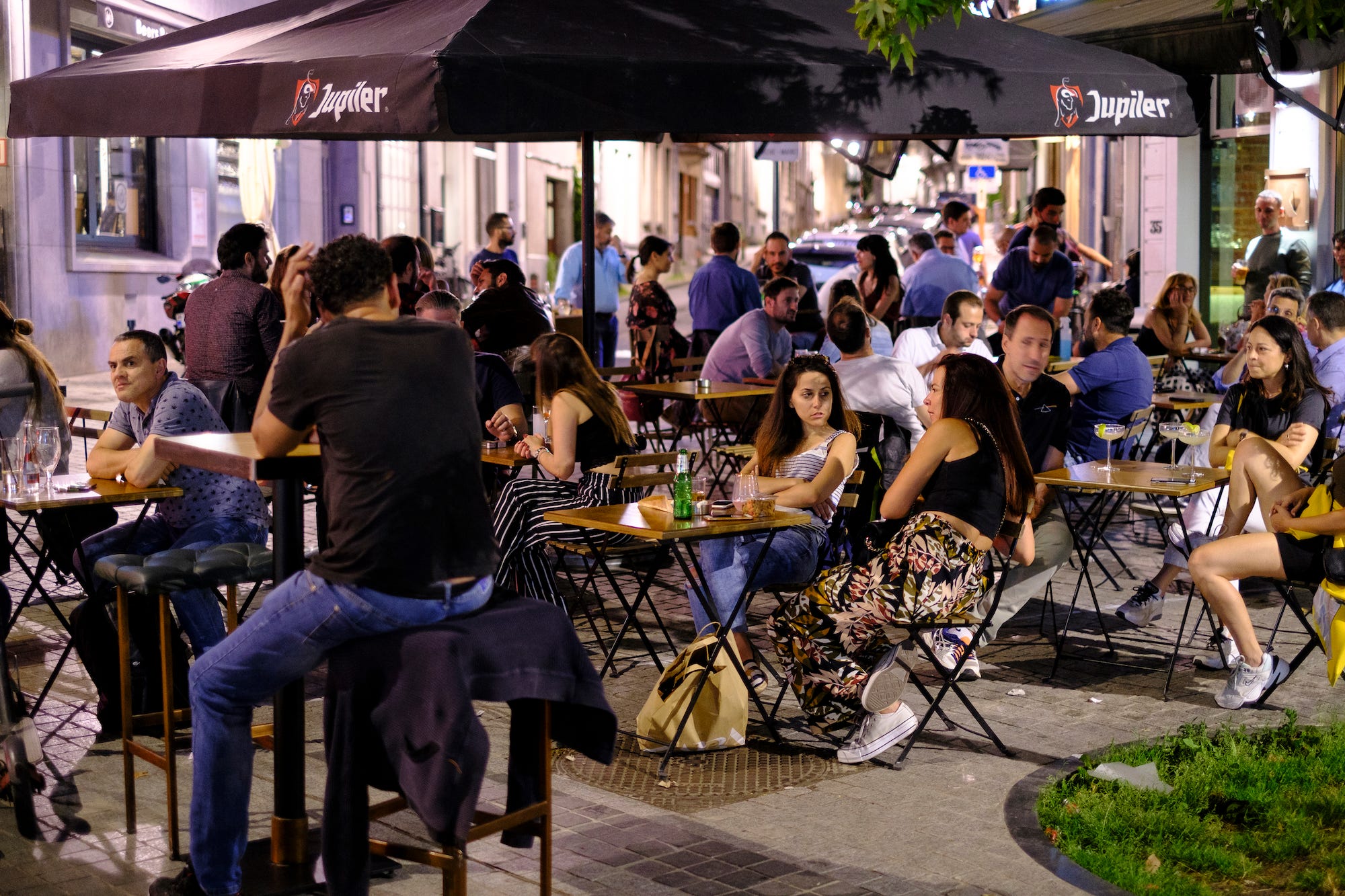 To boost the economy and encourage a return to travel, Belgium has even offered free rail passages to its citizens and opened its borders to other European travellers. 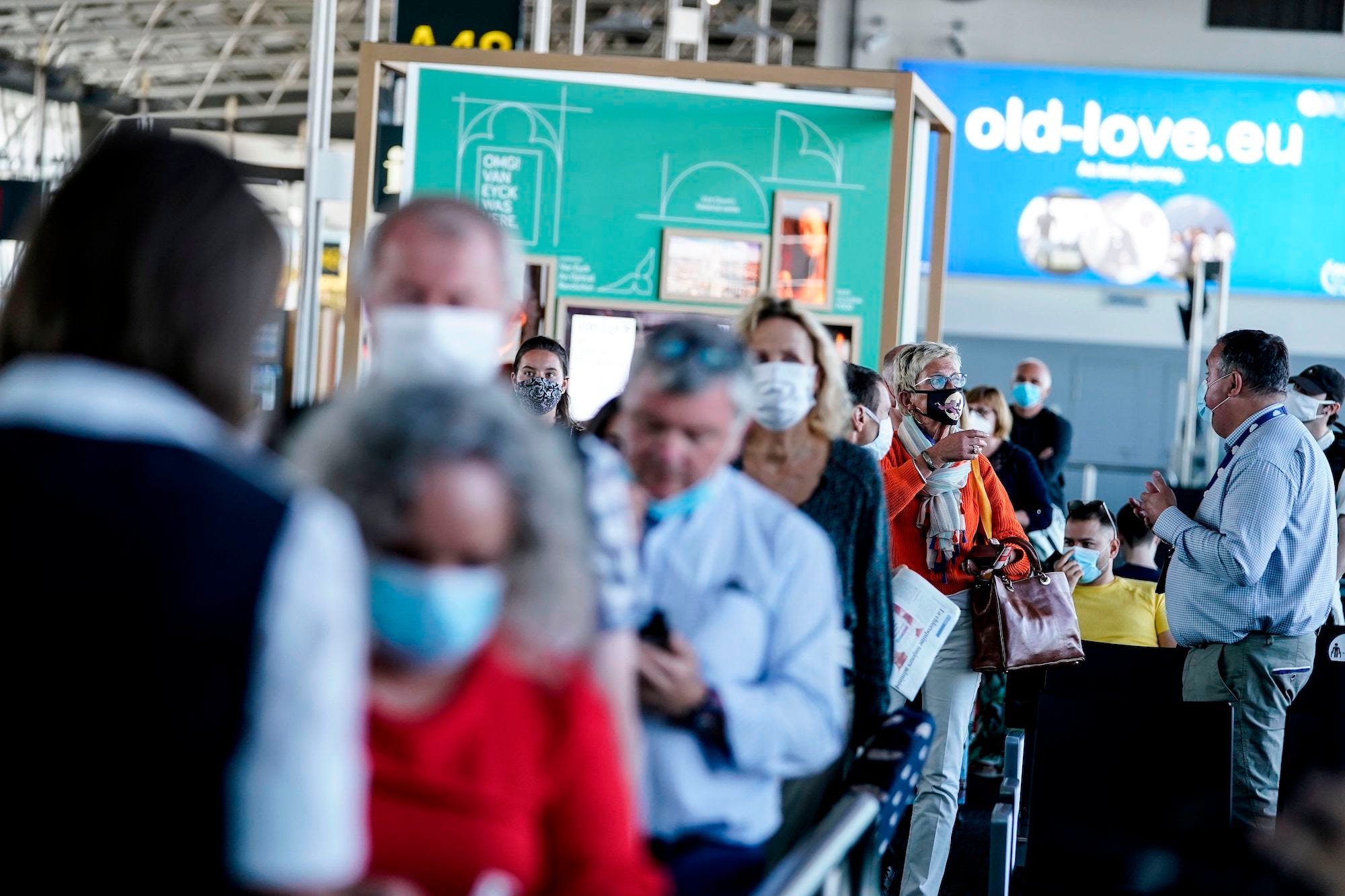 KENZO TRIBOUILLARD/AFP via Getty ImagesPassengers queue at the boarding gate at Brussels Airport, in Zaventem, on June 15, 2020 as Brussels Airport reopens for travels within Europe and the Schengen zone, after a months-long closure aimed at stemming the spread of the COVID-19 pandemic, caused by the novel coronavirus.

This photo in Amsterdam shows people sitting outside in a square after restrictions began easing in May. Some businesses, including hairdressers and beauticians, are no longer required to wear a mask during work. 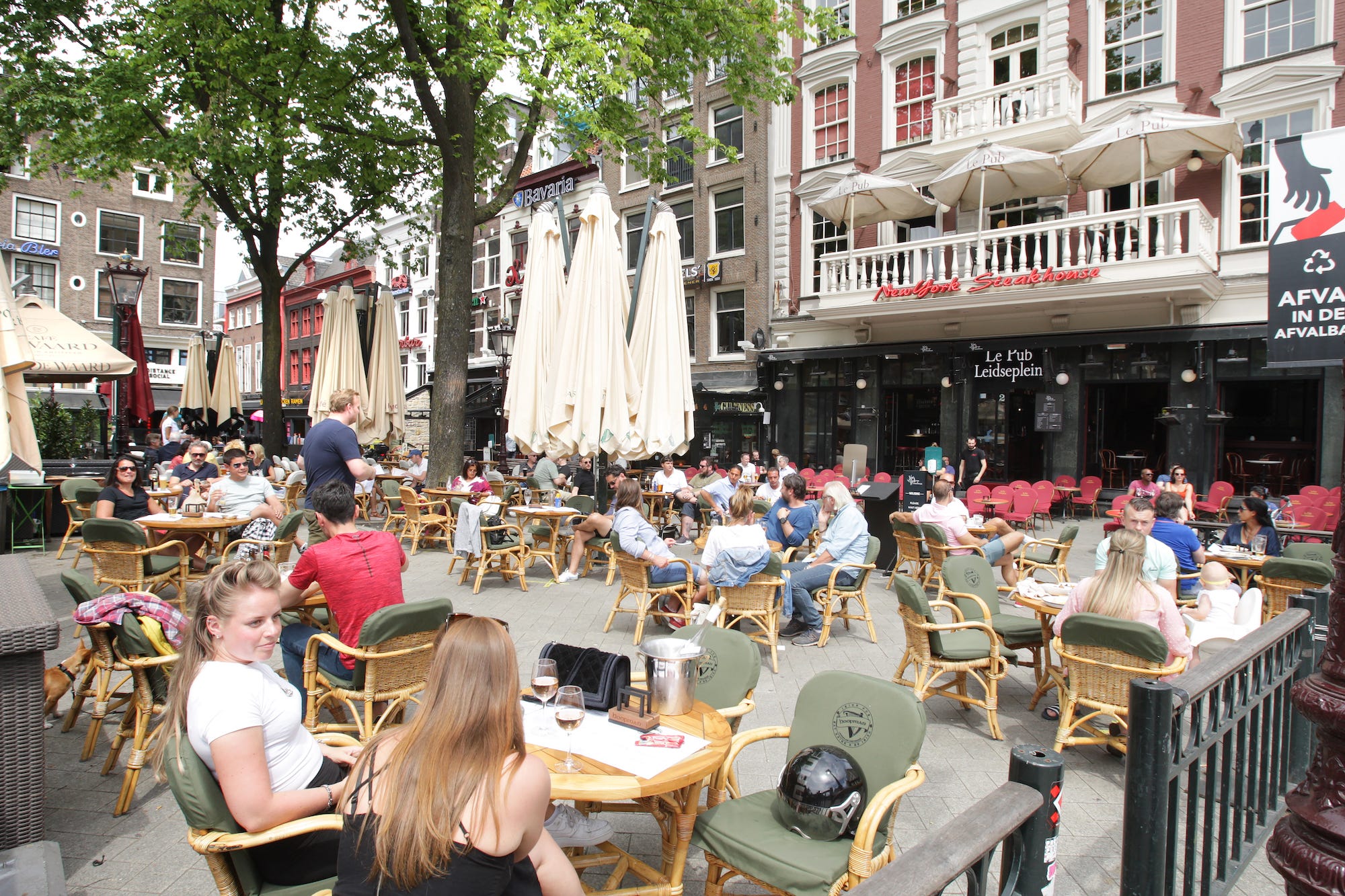 Paulo Amorim/NurPhoto via Getty ImagesTourists and locals enjoying on the terrace at the Leidseplen amid the Coronavirus pandemic on June 1, 2020 in Amsterdam, Netherlands.

Poland began to ease back into normal life with the reopening of businesses, shops, and restaurants in May. In this photo, people are seen watching a performance at a reopened theatre in June. 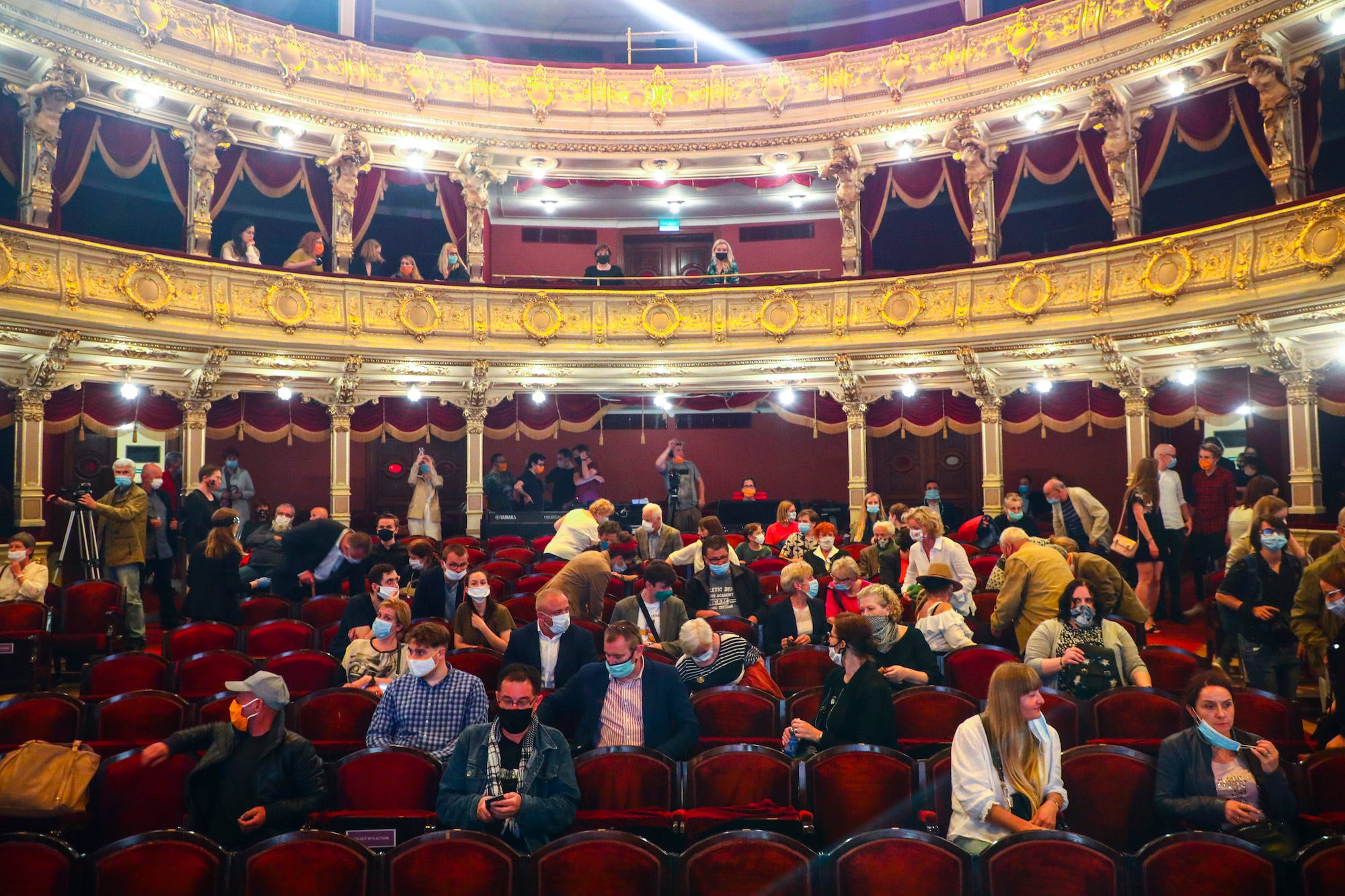 Beata Zawrzel/NurPhoto via Getty ImagesViewers are seen at Juliusz Slowacki Theatre which holds a first performance after three months of lockdown due to the spread of coronavirus. Krakow, Poland on June 19, 2020.

Sweden took a more unusual route in its coronavirus response. The country did not implement a lockdown and kept many of its businesses operating as usual during the height of the outbreak. 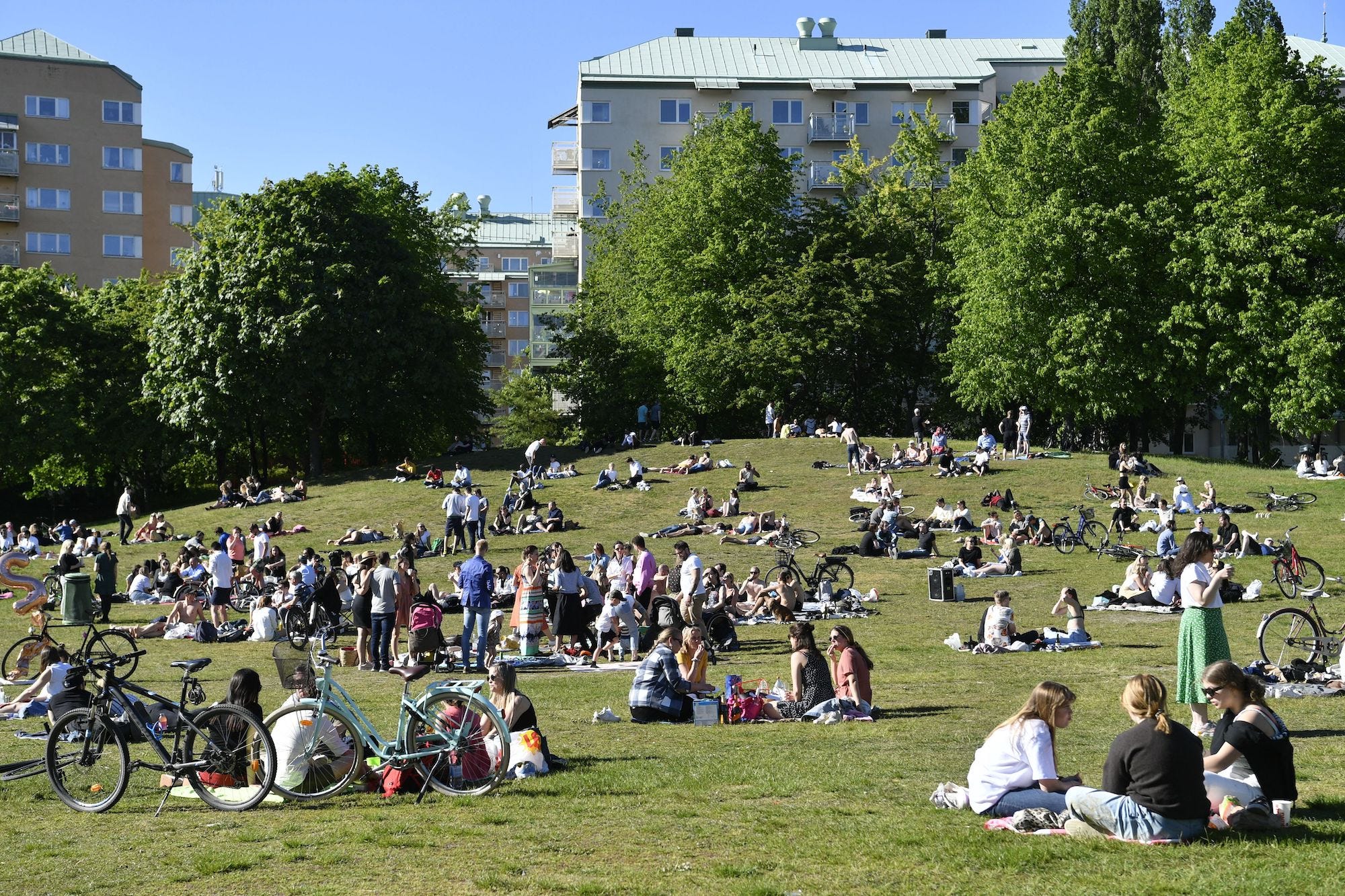 HENRIK MONTGOMERY/TT News Agency/AFP via Getty ImagesPeople enjoy the sunny weather in Tantolunden park in Stockholm on May 30, 2020, amid the novel coronavirus pandemic.

Because of this approach, Sweden has received backlash for recording one of the highest death tolls. Today, the country looks roughly the same as it did in March, with bars, restaurants, businesses, and schools open to the public. 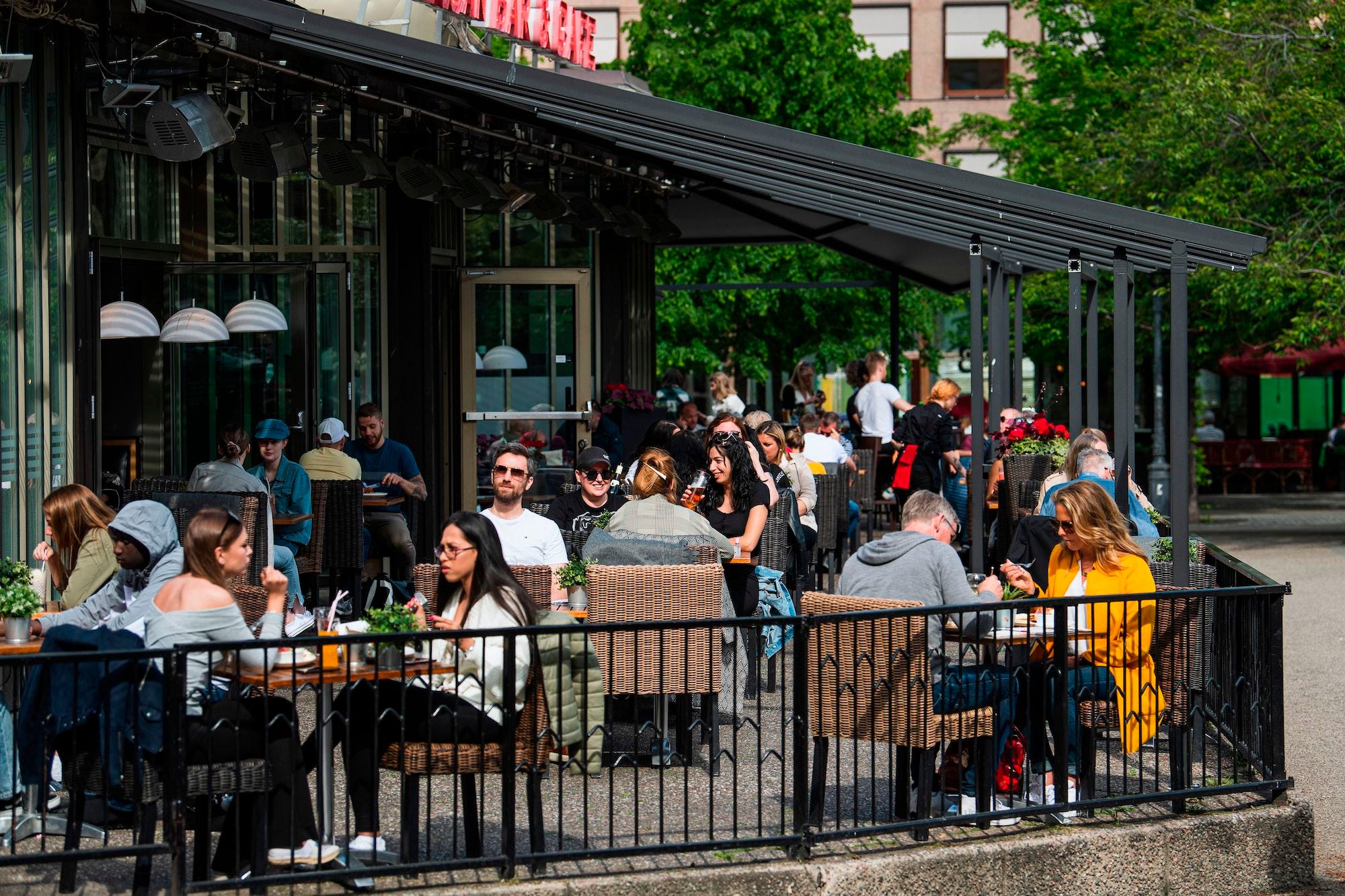 JONATHAN NACKSTRAND/AFP via Getty ImagesPeople sit in a restaurant in Stockholm on May 29, 2020, amid the coronavirus COVID-19 pandemic

On July 1, the EU is set to reopen its borders to international travel. However, the plan might bar people coming from the US, Russia, and Brazil due to high coronavirus outbreaks in each country. 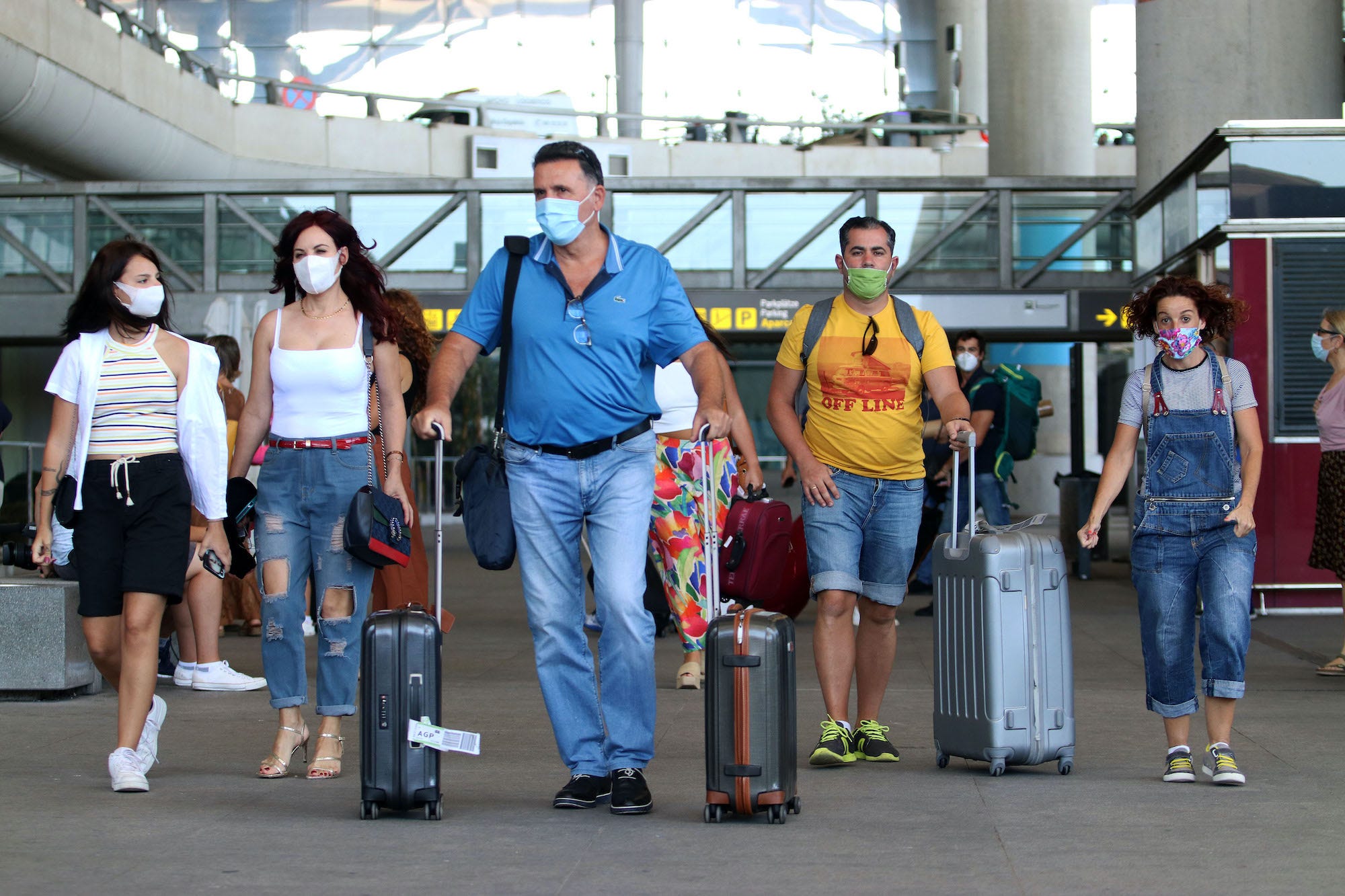 Europa Press News/Europa Press via Getty ImagesArrival of tourists and residents at Pablo Ruiz Picasso Airport in Malaga, after the government opened the borders on the first day without COVID-19 virus alarm on June 22, 2020 in Malaga, Spain.