18 times celebrities brought back fashion from the early 2000s 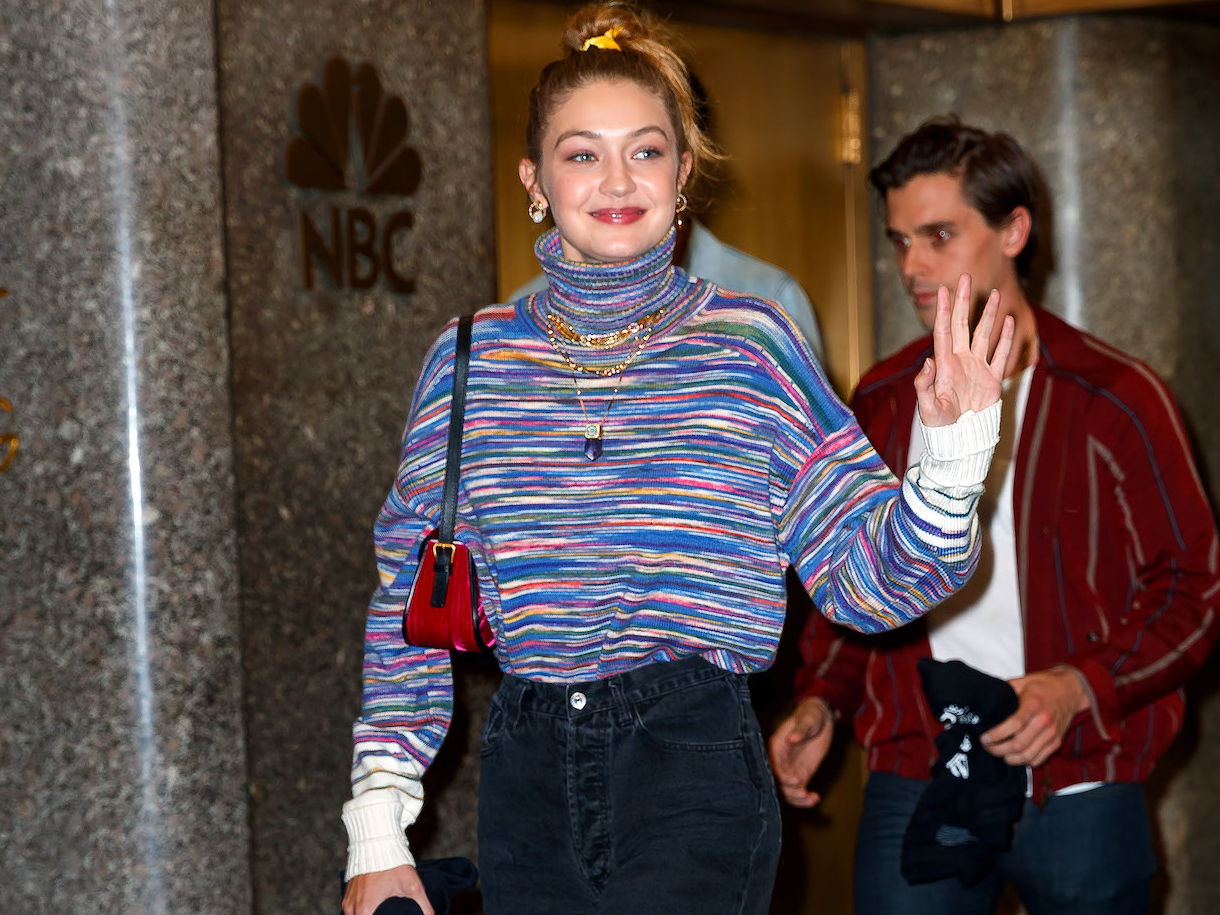 Fashion inspired by the ’90s is out, and styles from the early 2000s are in – at least, that’s according to celebrities.

Bella Hadid, Lizzo, and Rihanna are among the stars who can’t stop wearing trends that were popular in the early aughts. Tube tops seem to be some of their favourite garments, while tracksuits have also been making a comeback.

Here’s a look at how celebrities are turning early 2000s fashion into modern styles.

Zendaya put her own twist on the 2000s tracksuit trend in February 2018. 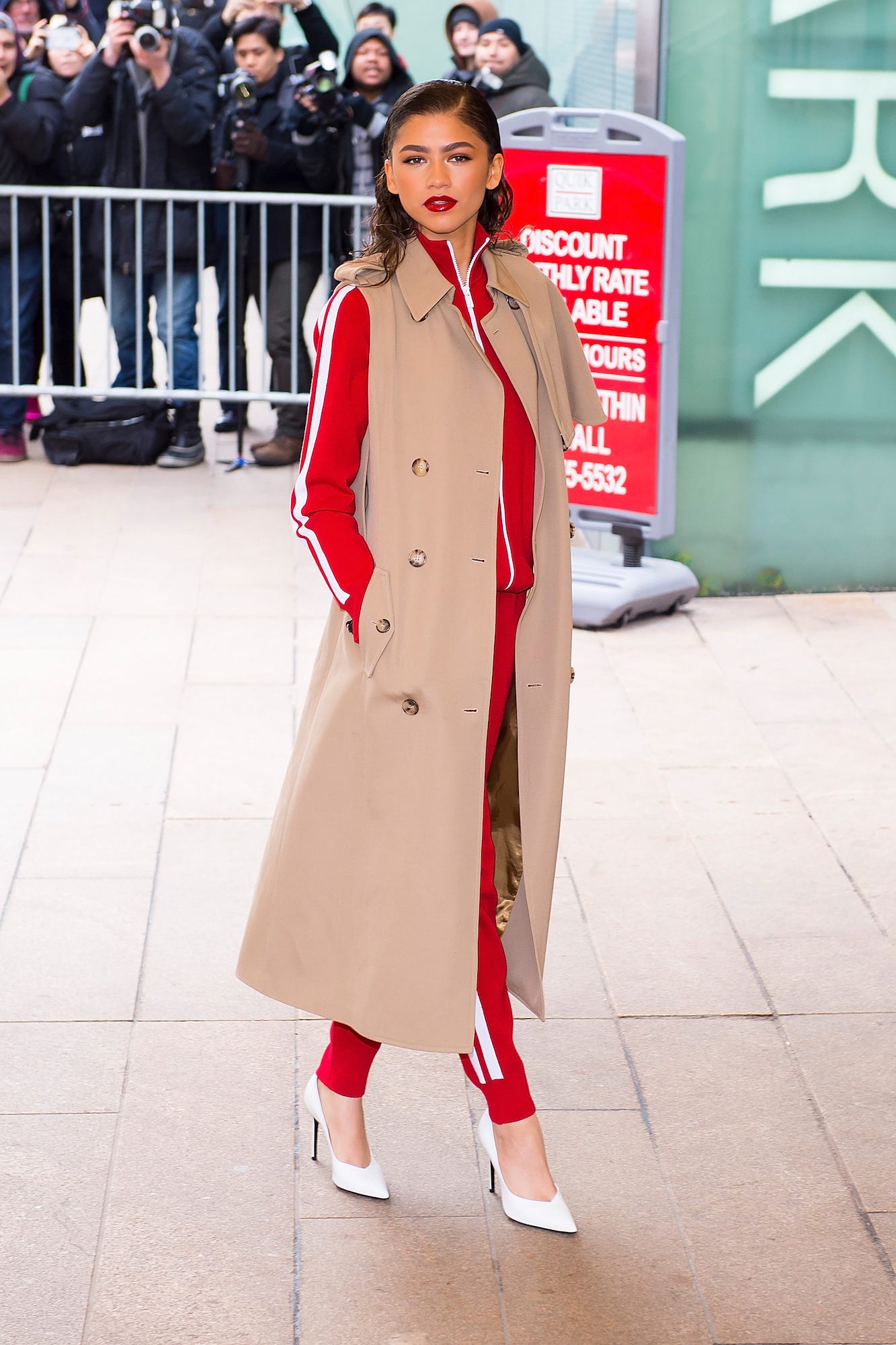 Thanks to brands like Juicy Couture, tracksuits became status-symbol outfits of the early 2000s. Zendaya brought the look back in 2018 when she attended New York Fashion Week wearing a red tracksuit with white stripes and a high neckline.

To put her own glamorous spin on the look, Zendaya also wore white pumps and a tan sleeveless jacket.

In August 2018, Travis Scott sported Von Dutch, a brand that was last popular in the early aughts. Von Dutch was a fashion brand that reportedly earned $US33 million in sales at its peak in 2003, but basically disappeared by the 2010s.

That all changed when Kylie Jenner donned a Von Dutch trucker hat on Instagram in 2016, inspiring other celebrities to follow suit. Scott even wore one of the hats while attending the 2018 VMAs alongside Jenner. 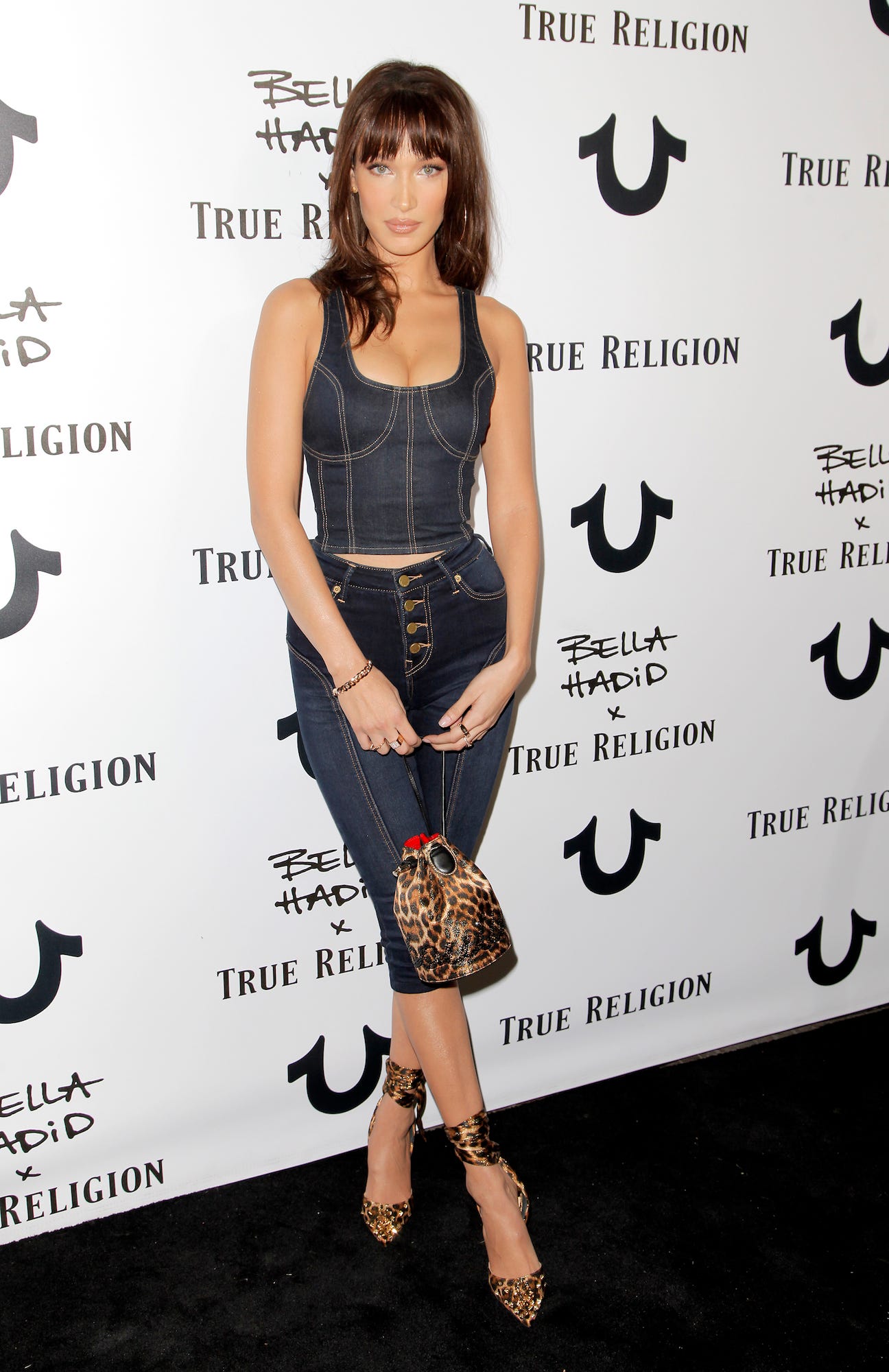 Her outfit was comprised of a sleeveless denim top and matching capri pants.

To make her style even more reminiscent of the early 2000s, Hadid also donned animal-print shoes and carried a leopard-print handbag.

In June 2019, Emily Ratajkowski wore two trends from the early aughts in one look. 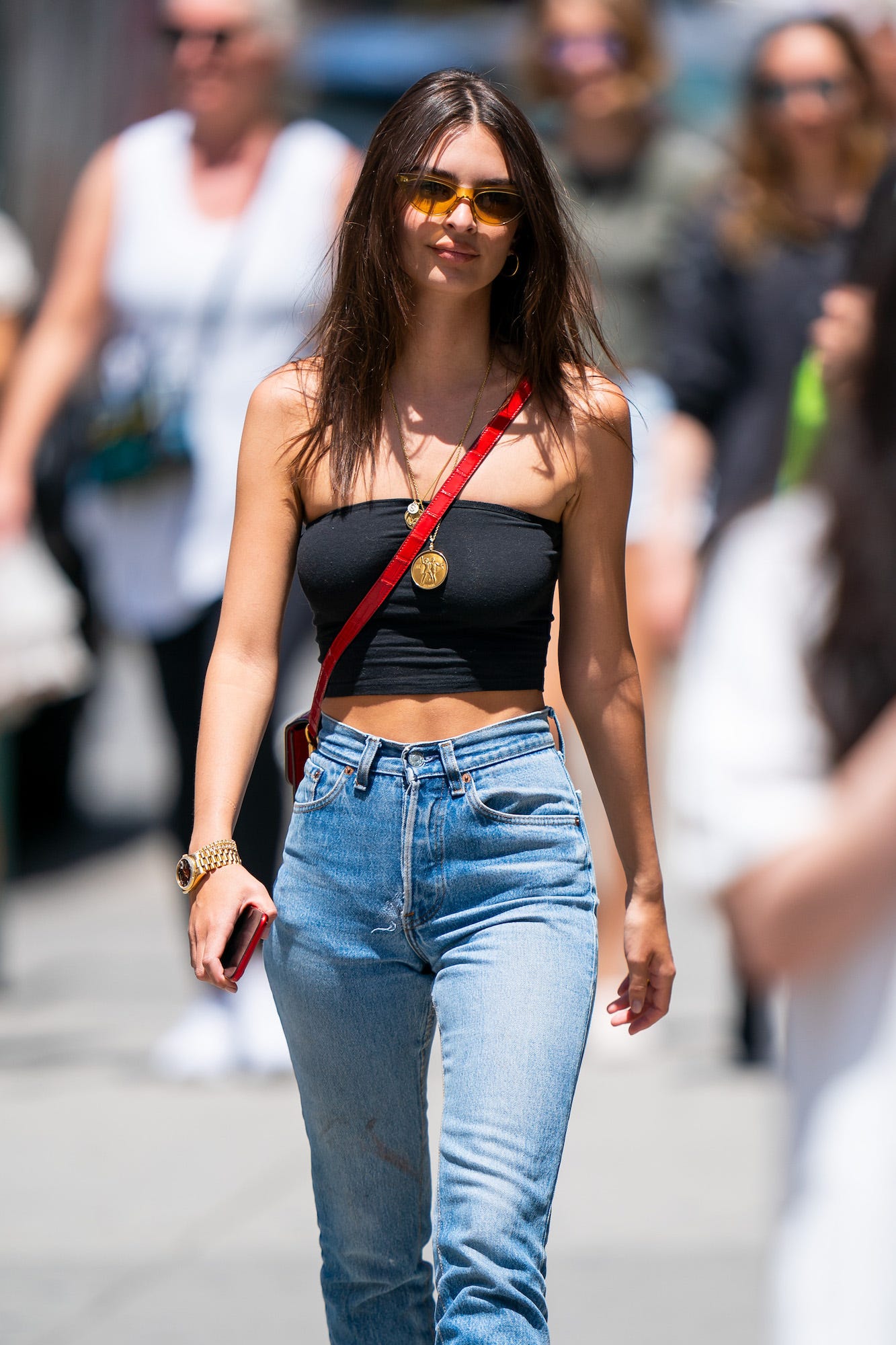 For a stroll around New York, she paired a black tube top with high-waisted jeans. She also wore yellow-tinted sunglasses, which were all the rage in the 2000s.

A$AP Rocky added a touch of tie-dye to his Paris Fashion Week look that same month. 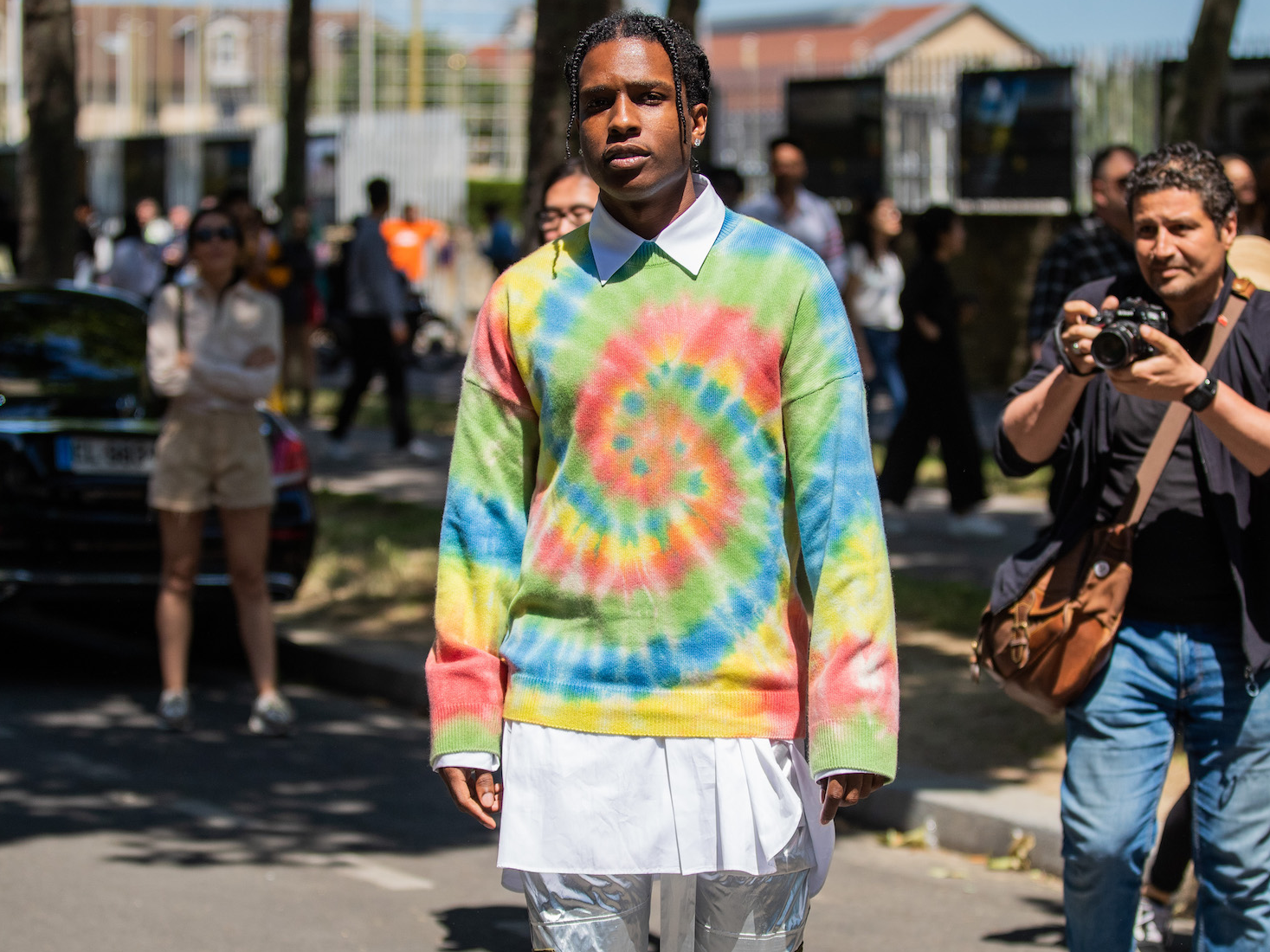 There’s no doubt that tie-dye is returning from the early aughts. Rocky proved this when he wore a tie-dye pullover on top of a collared shirt while attending Paris Fashion Week on June 22.

Ella Mai, on the other hand, wore one of the brightest trends from the 2000s at the BET Awards. 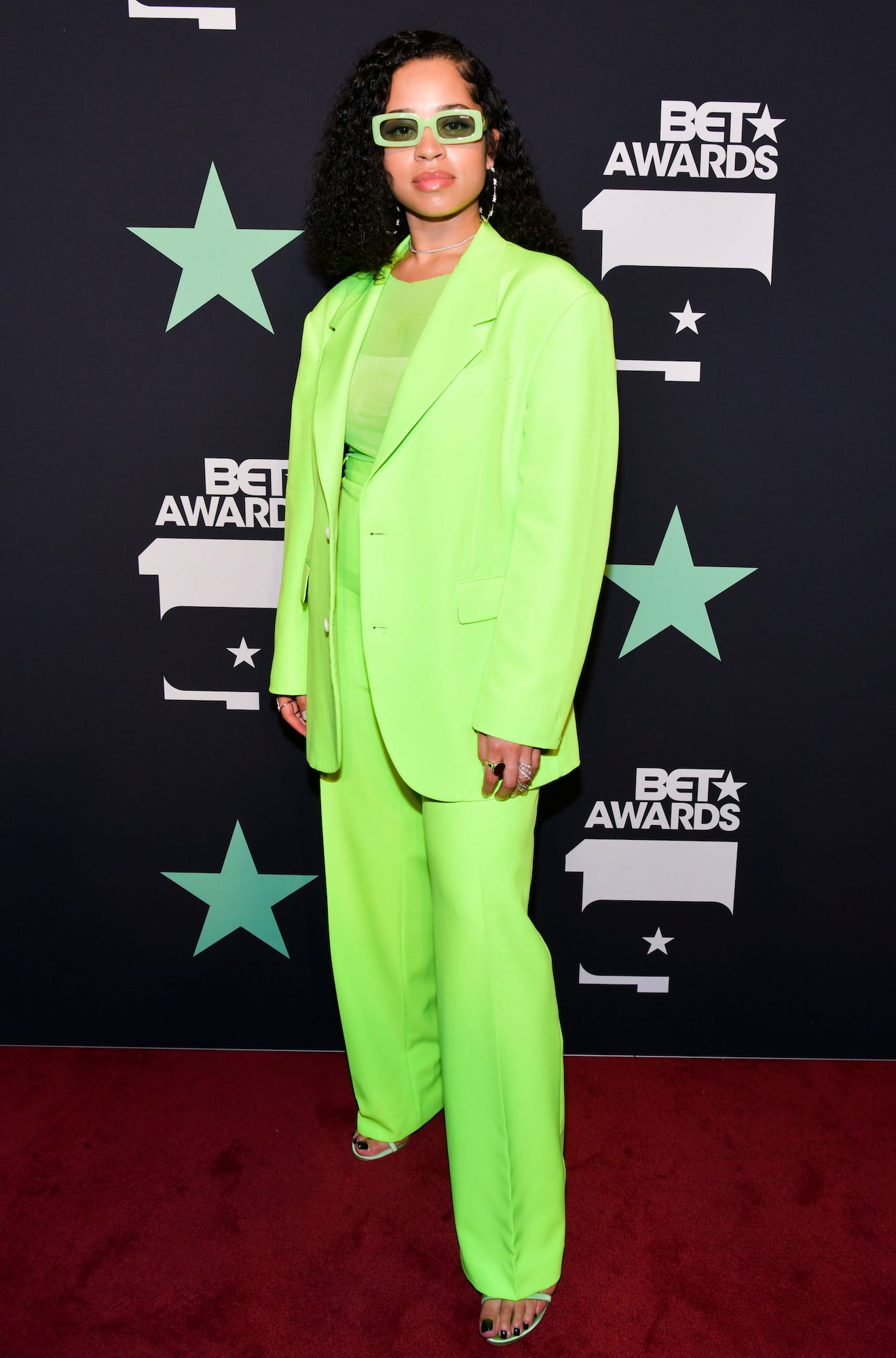 Right before the 2010s began, neon was everywhere. Clothes have since become a bit more subtle, though stars like Mai are seemingly trying to change that.

The musician wore a neon-green pantsuit to the BET Awards on June 23. She completed the look with matching oversized sunglasses.

In August 2019, Lizzo and Missy Elliot both wore 2000s-inspired fashion to an MTV VMAs after-party. 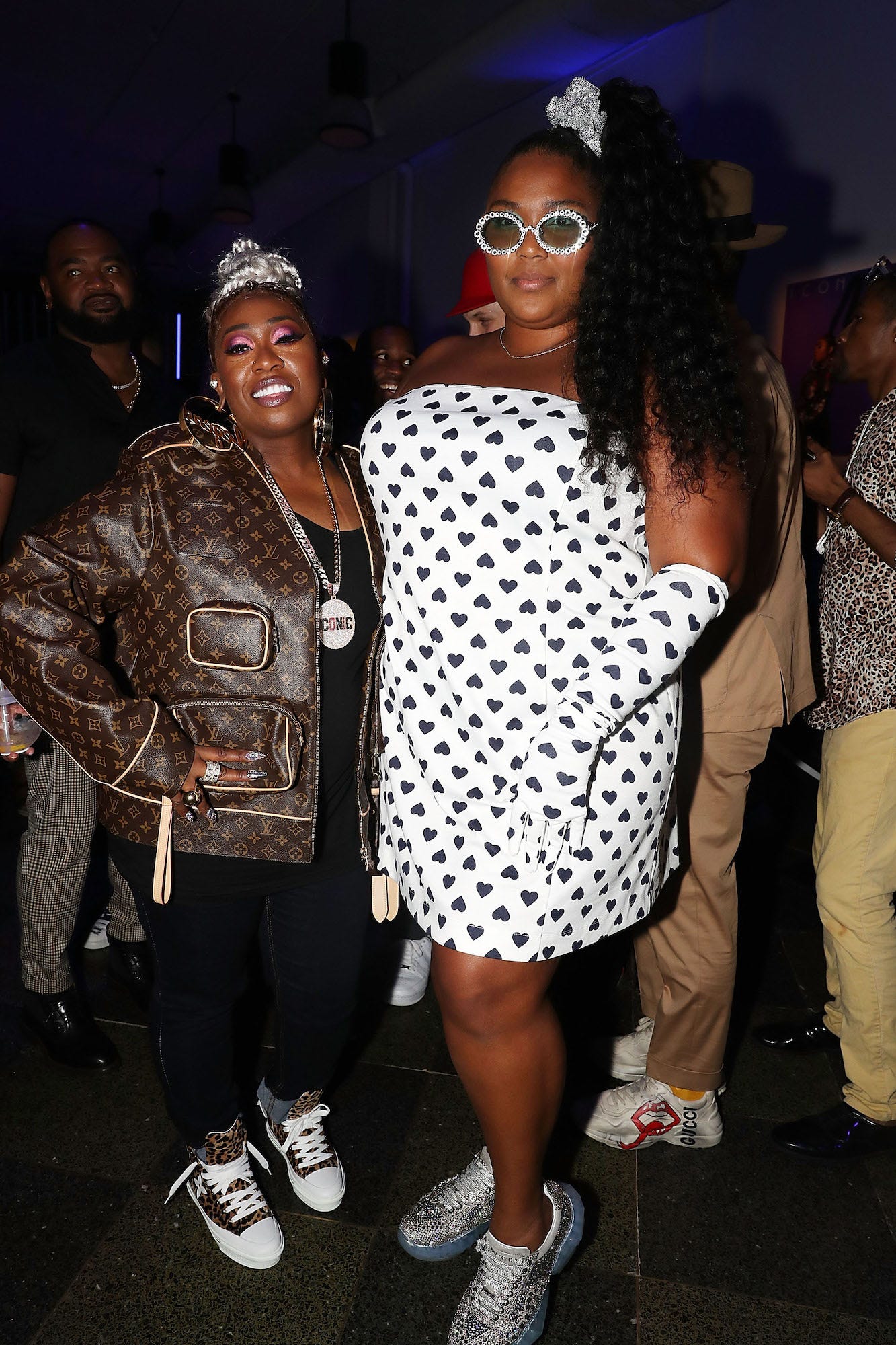 Elliot donned the logo-mania trend with her Louis Vuitton jacket, as well as animal-print shoes.

Lizzo, on the other hand, wore oversized sunglasses, a tube top-style dress, and dad sneakers covered in sparkles.

“The Bachelorette” alum Hannah Brown brought back the bare midriff trend in September of that year. 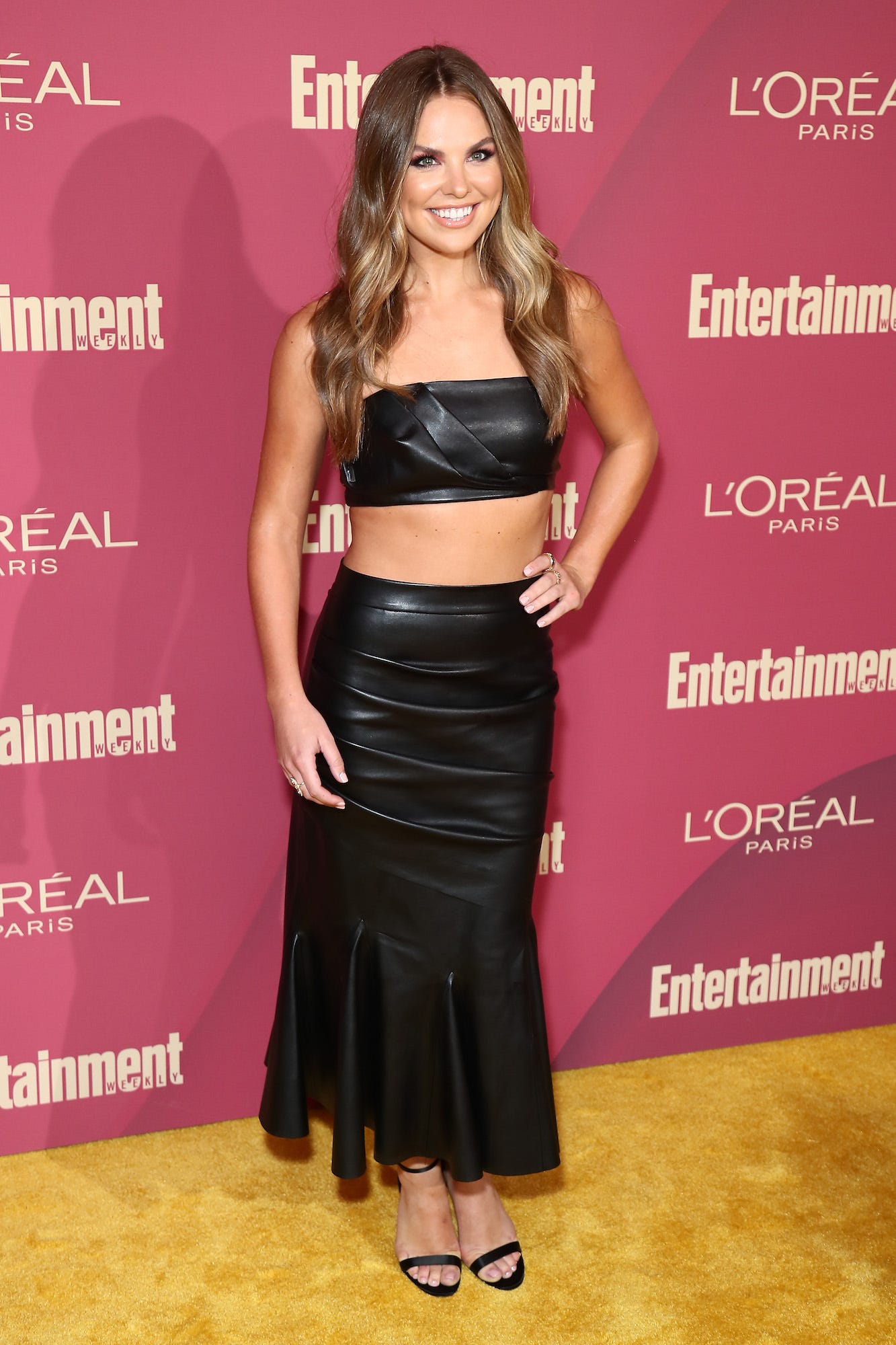 In the 2000s, celebrities were constantly photographed wearing clothes that showcased their midriffs, the area between the chest and waist.

Sheer outfits have since become the go-to daring style, but bare midriffs might be making a comeback. Brown embraced the style as recently as September when she attended a pre-Emmy party wearing a two-piece leather set.

Headbands are officially back in style, according to stars like Lea Michele. 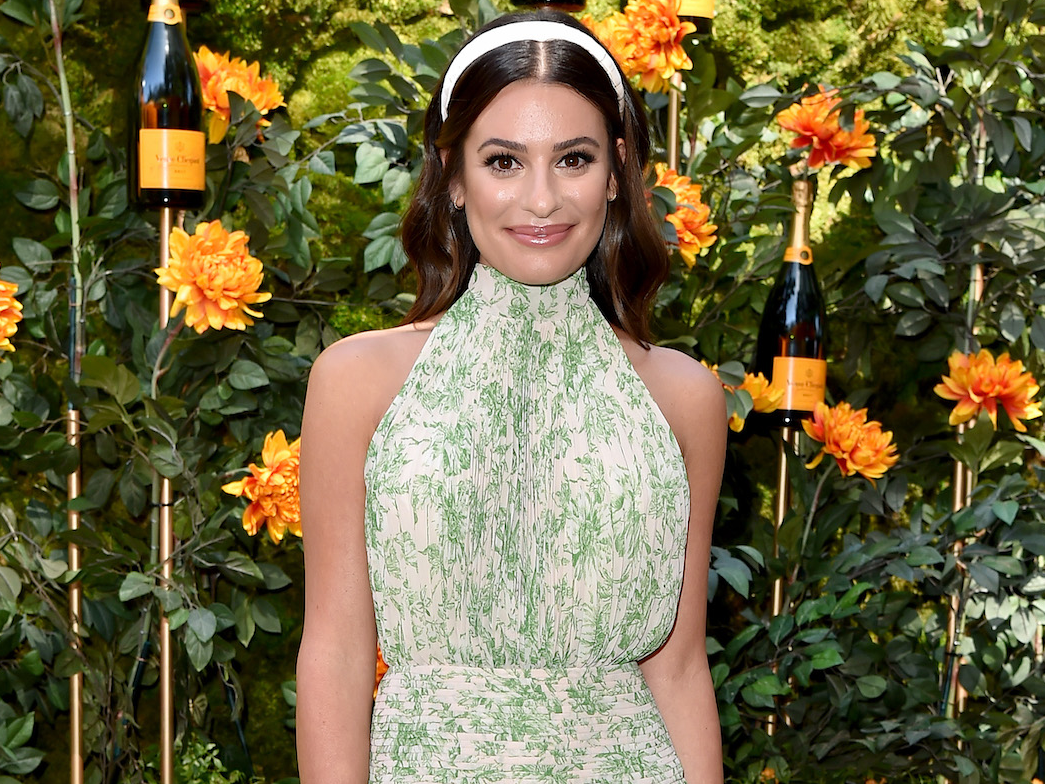 The actress wore a white headband with a floral green dress in October.

Headbands were first popular in the ’90s, but Blair Waldorf from “Gossip Girl” made them even more so in the early 2000s.

In October 2019, Gigi Hadid stepped out wearing an outfit that looked like it came straight from the early 2000s. 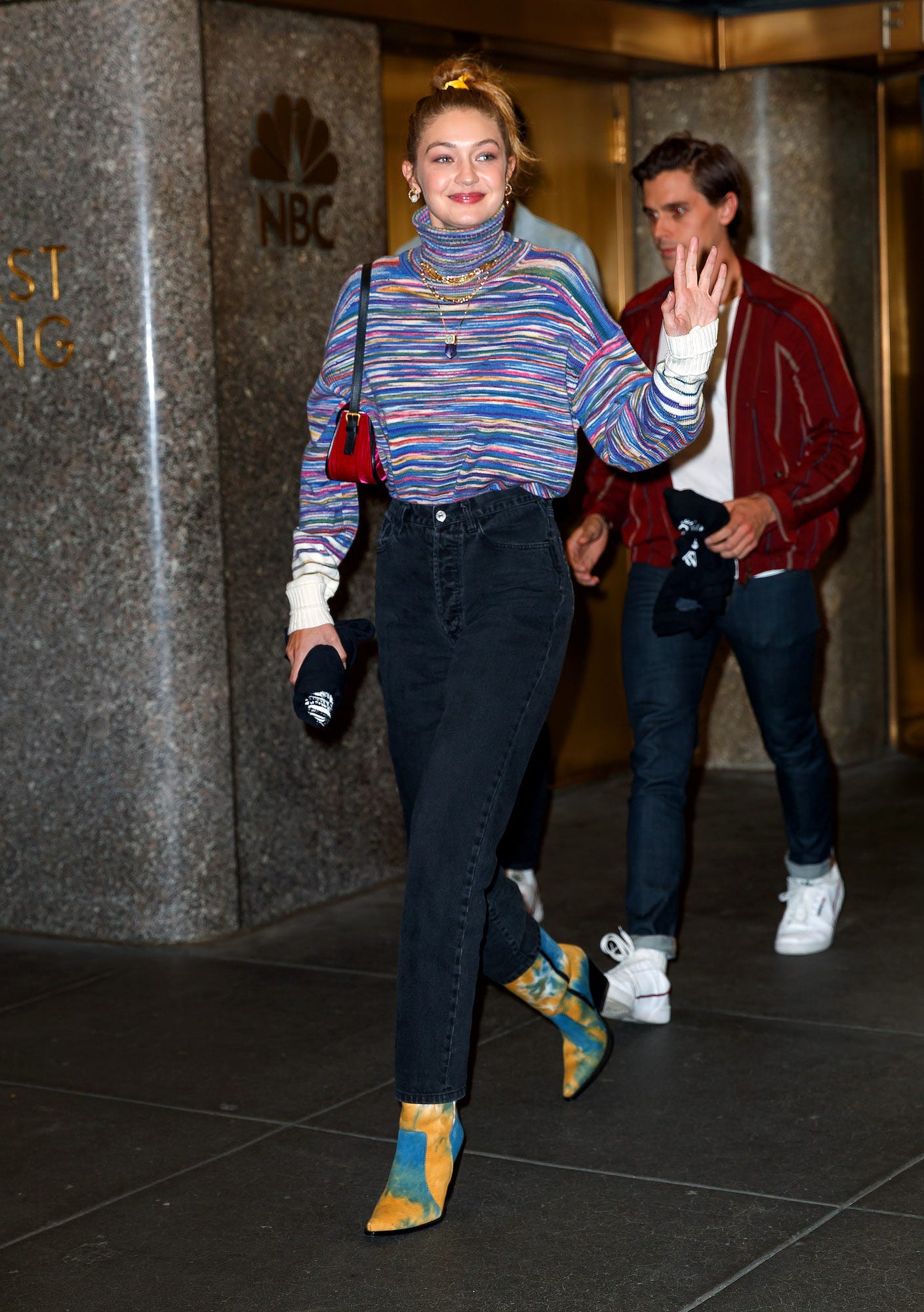 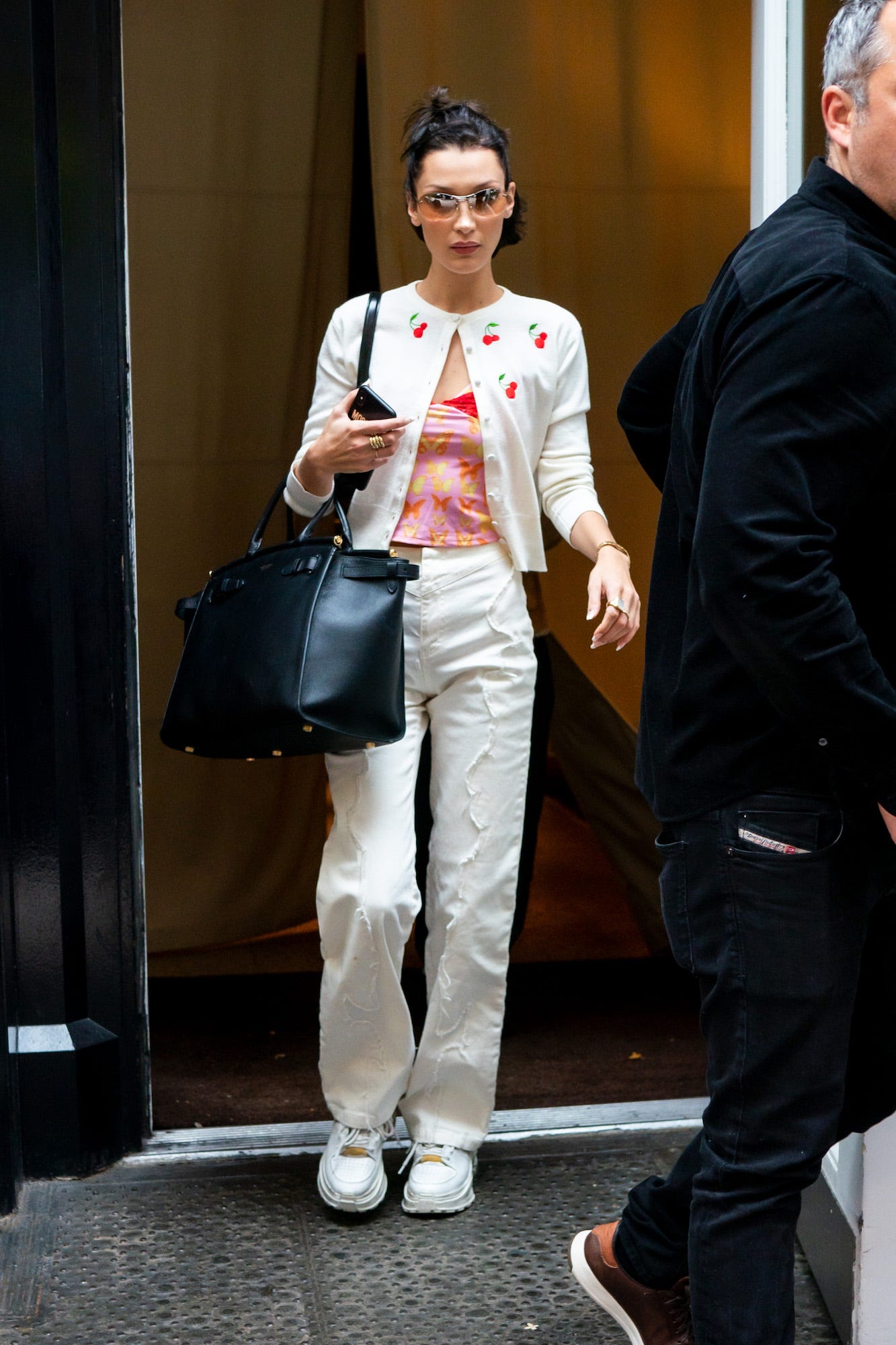 The model layered a cherry-print cardigan over a butterfly-print top. She completed the look with a pair of dad sneakers and oversized sunglasses.

While walking around New York, Rihanna wore a white ensemble that she seemingly plucked from the early aughts. 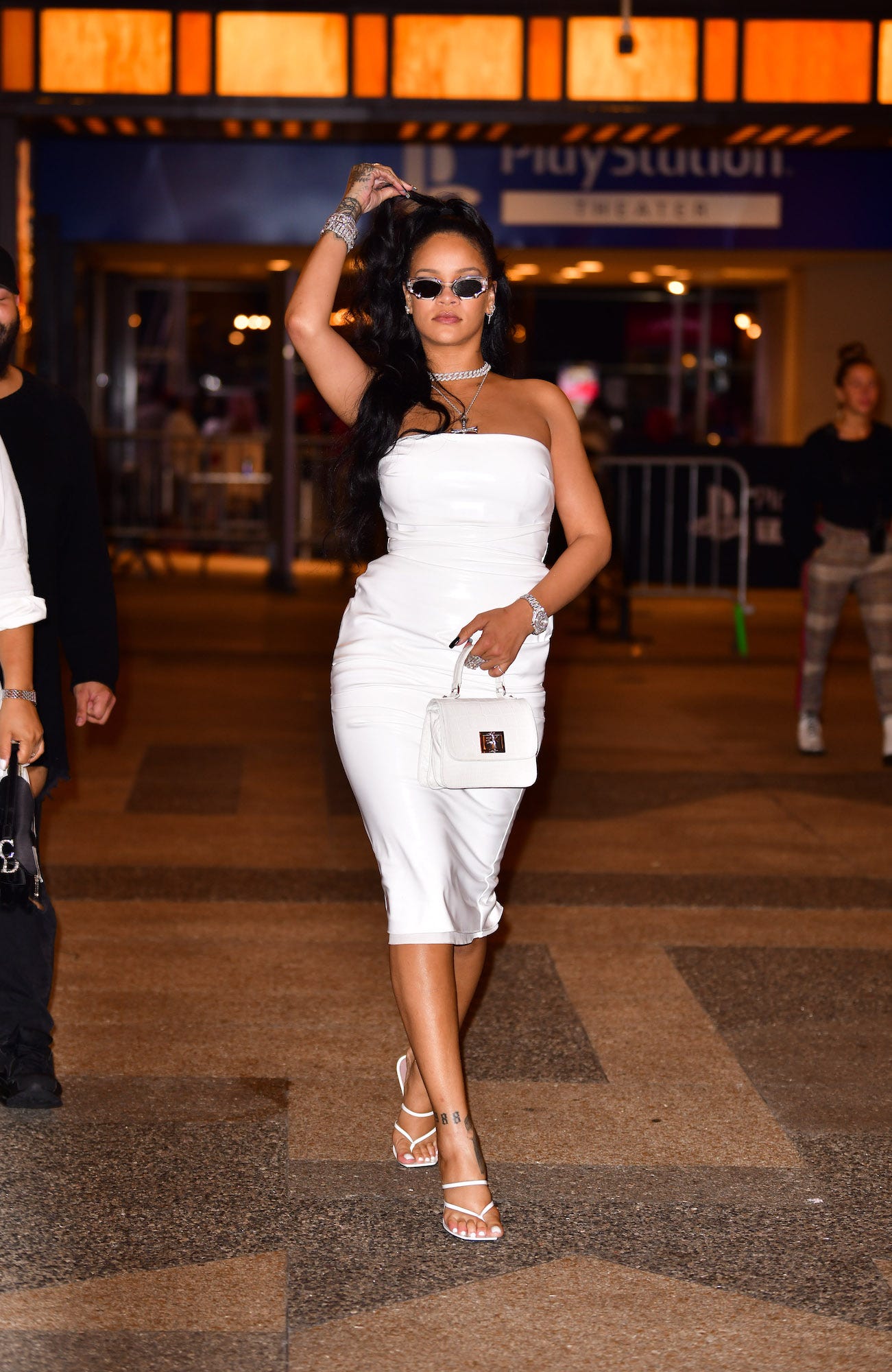 She wore a strapless white dress with a matching handbag and high-heeled flip flops. To add some sparkle, Rihanna completed her look with layers of diamond necklaces and bracelets. 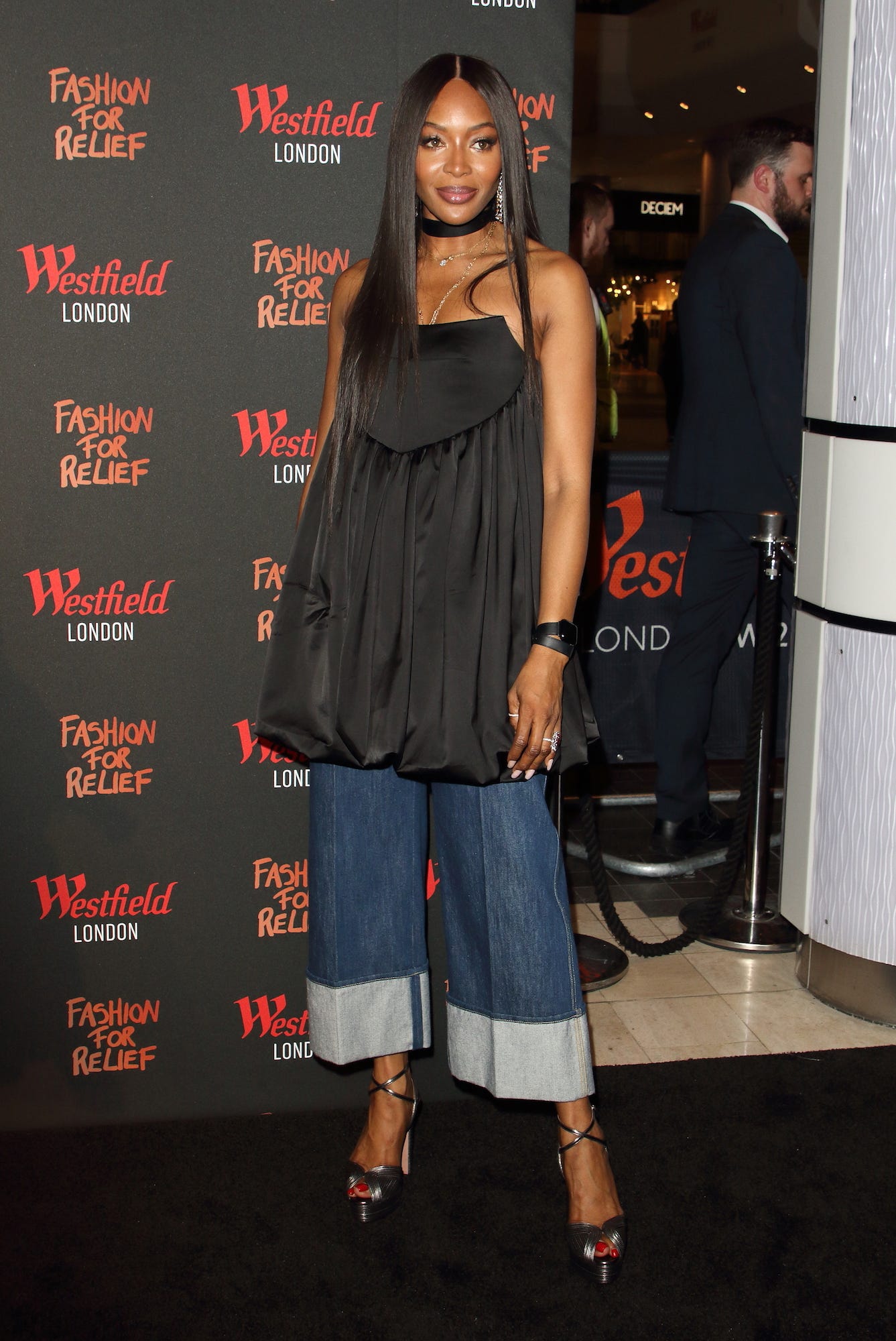 Barcroft Media/Getty ImagesNaomi Campbell at a Fashion For Relief event in London on November 26, 2019.

Back in the early 2000s, stars like Paris Hilton, Christina Milian, and Anne Hathaway wore bubble skirts and wide-legged pants. Campbell, however, put a modern twist on the styles by adding silver jewellery, metallic platform sandals, and a black choker necklace. 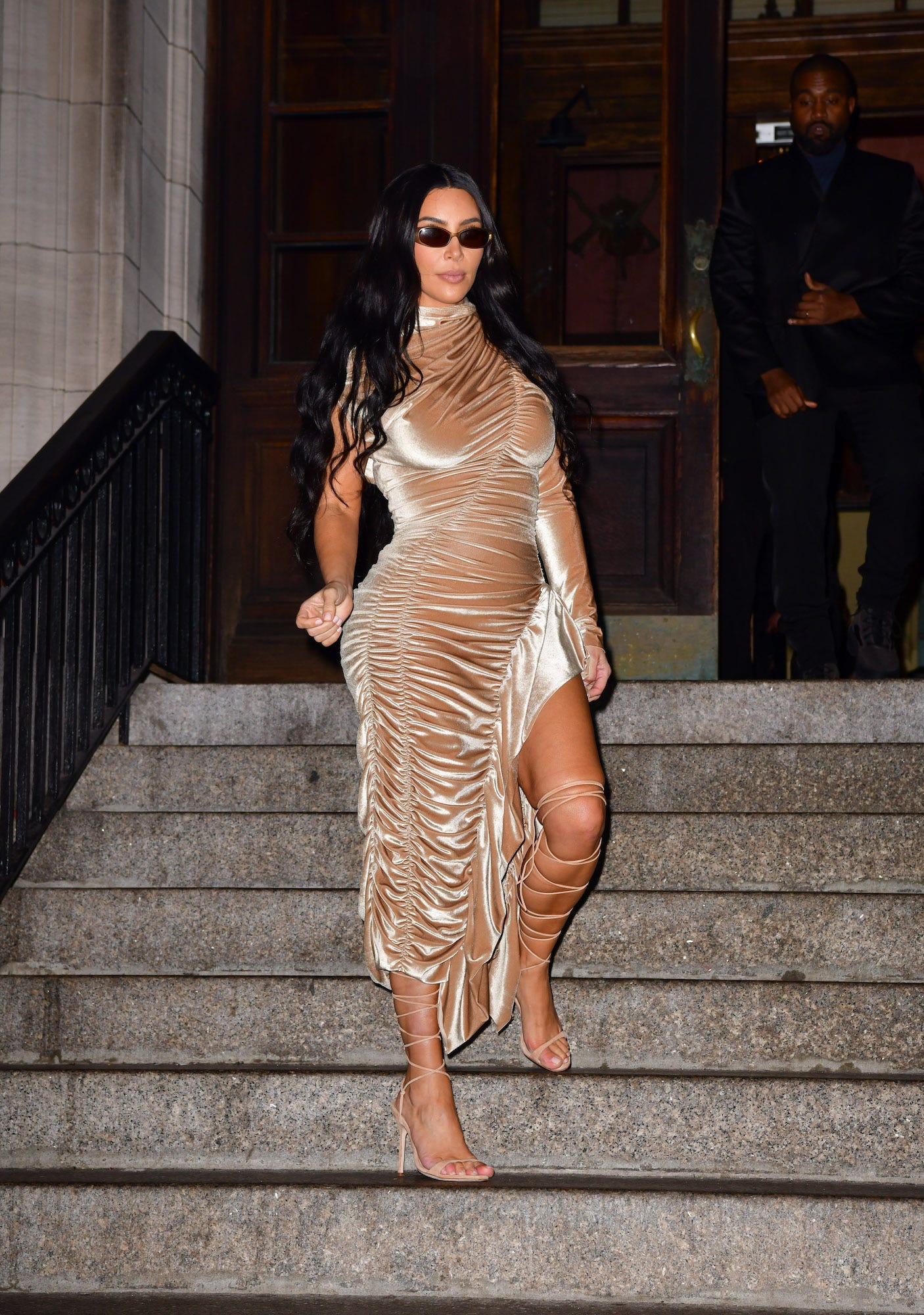 Her oval-shaped sunglasses with coloured lenses, for example, look a lot like the styles that were popular in the ’90s and early aughts.Ruched velvet dresses and asymmetrical hems were also popular at the start of the 21st century, and gladiator-style sandals reached their peak between 2010 and 2015.

Kardashian West wore the outfit despite temperatures reaching less than 45 degrees that day.

Bella Hadid kicked off 2020 in a blue crop top and low-rise pants. 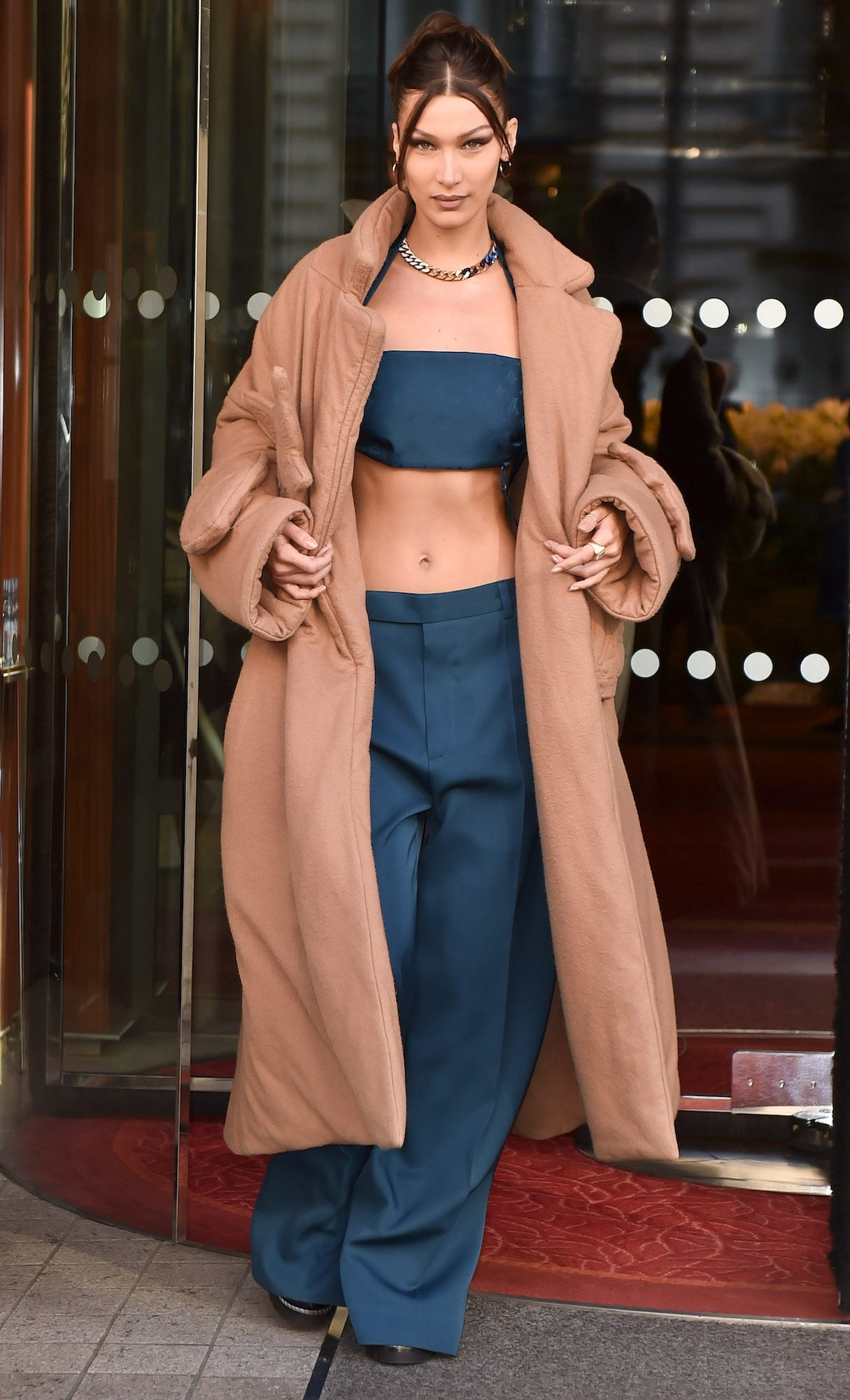 Her entire outfit was designed by Louis Vuitton and subtly featured the brand’s logo – which called back to the logomania trend of the early aughts.

Her outfit also showcased the earlier decade’s bare midriff trend and controversial low-rise pant fad, which is coming back in fashion. 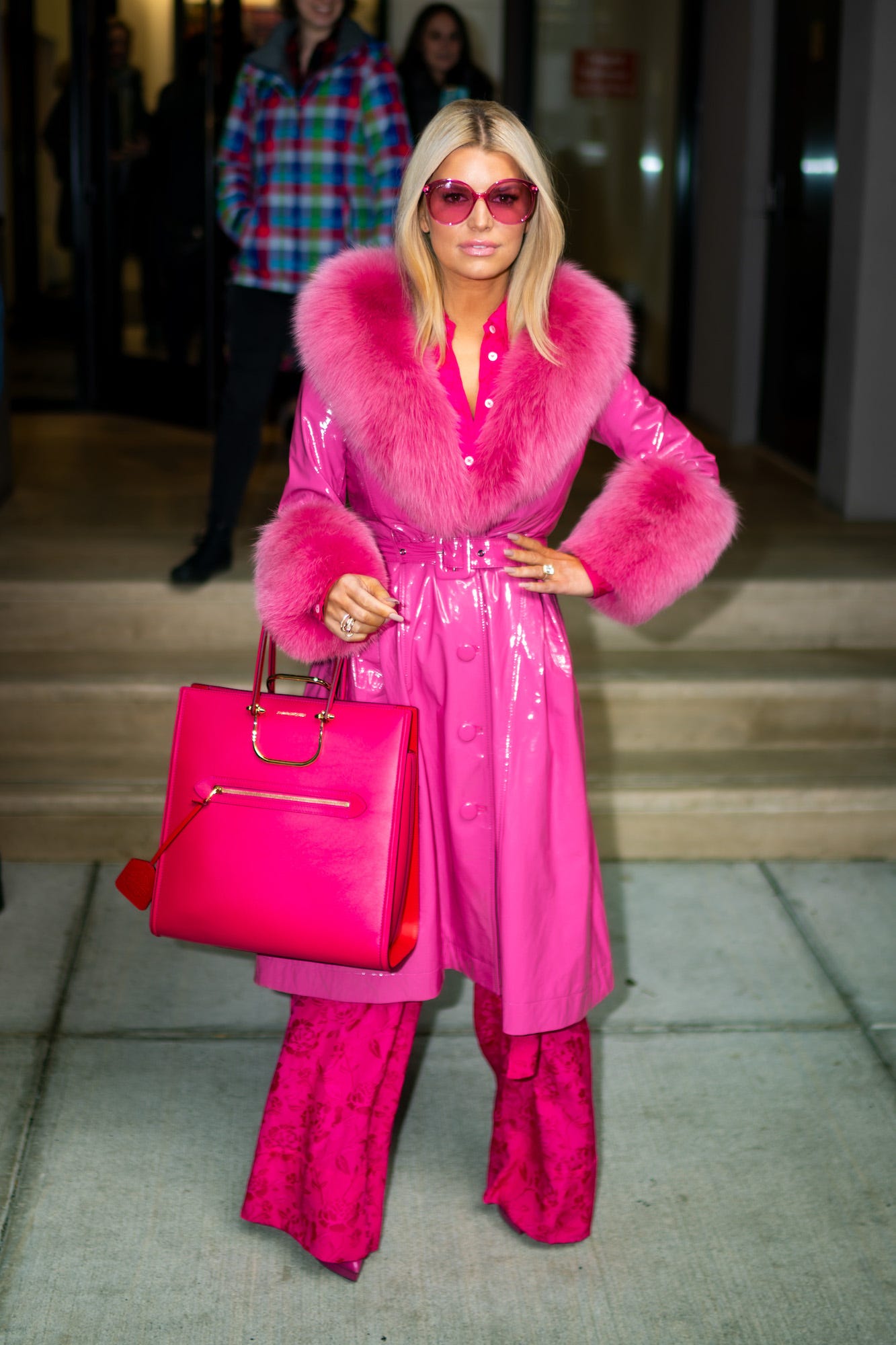 Her head-to-toe pink outfit included a $US1,799 lamb-leather coat with fox-fur trim, a $US345 jumpsuit, and pointed Saint Laurent pumps. She also donned pink Gucci sunglasses and carried a $US2,590 handbag. 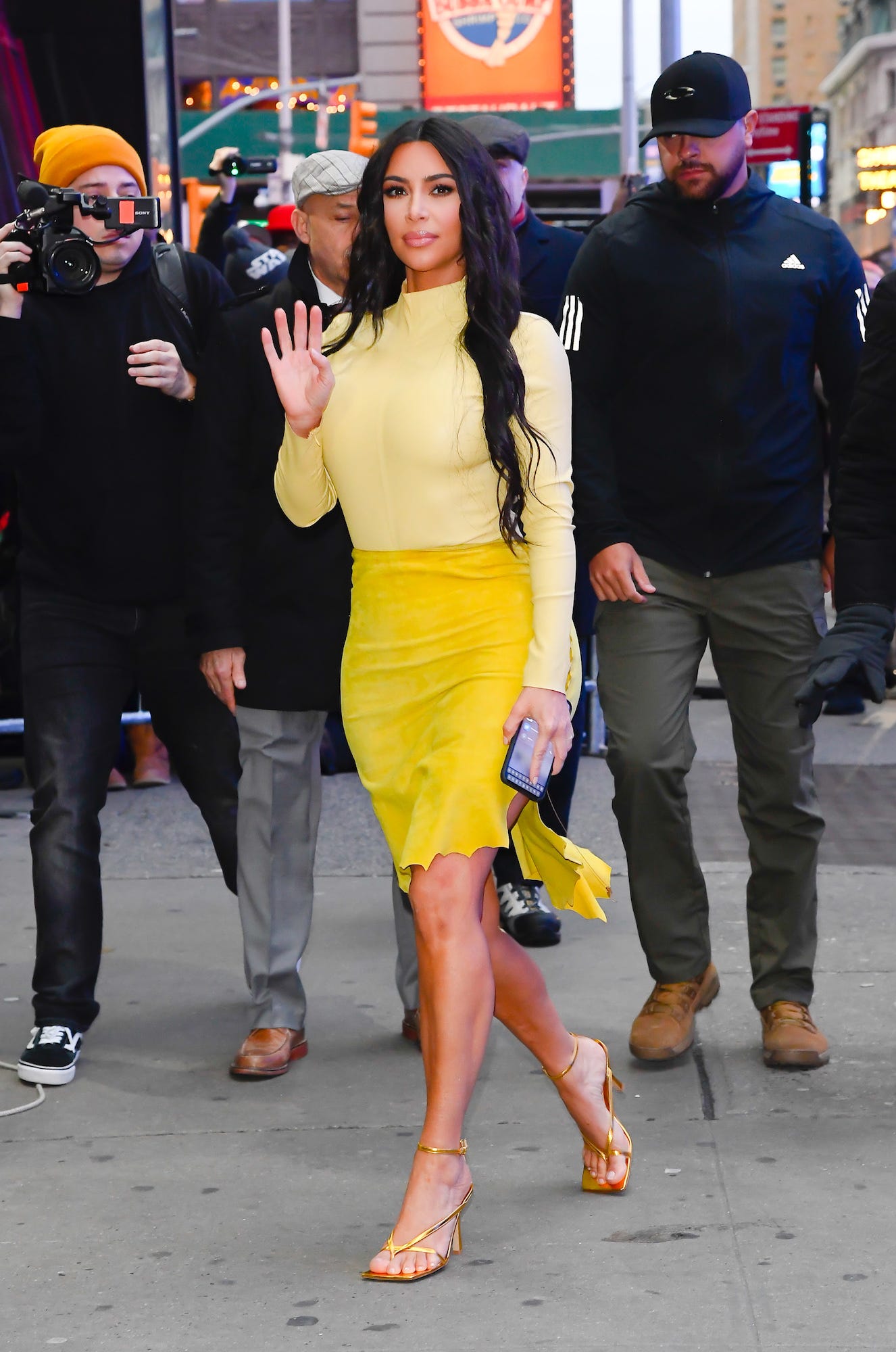 Heeled flip flops became popular in the early 2000s, when stars like Christina Aguilera and Tara Reid donned the shoes. Today, everyone from Rihanna to Emily Ratajkowski has been spotted wearing them.

Kardashian West chose to pair a metallic style of the shoes, designed by Bottega Veneta, with a yellow high-neck top and a standout neon skirt.

Jennifer Lopez rocked an early 2000s-inspired outfit with a 2020 twist. 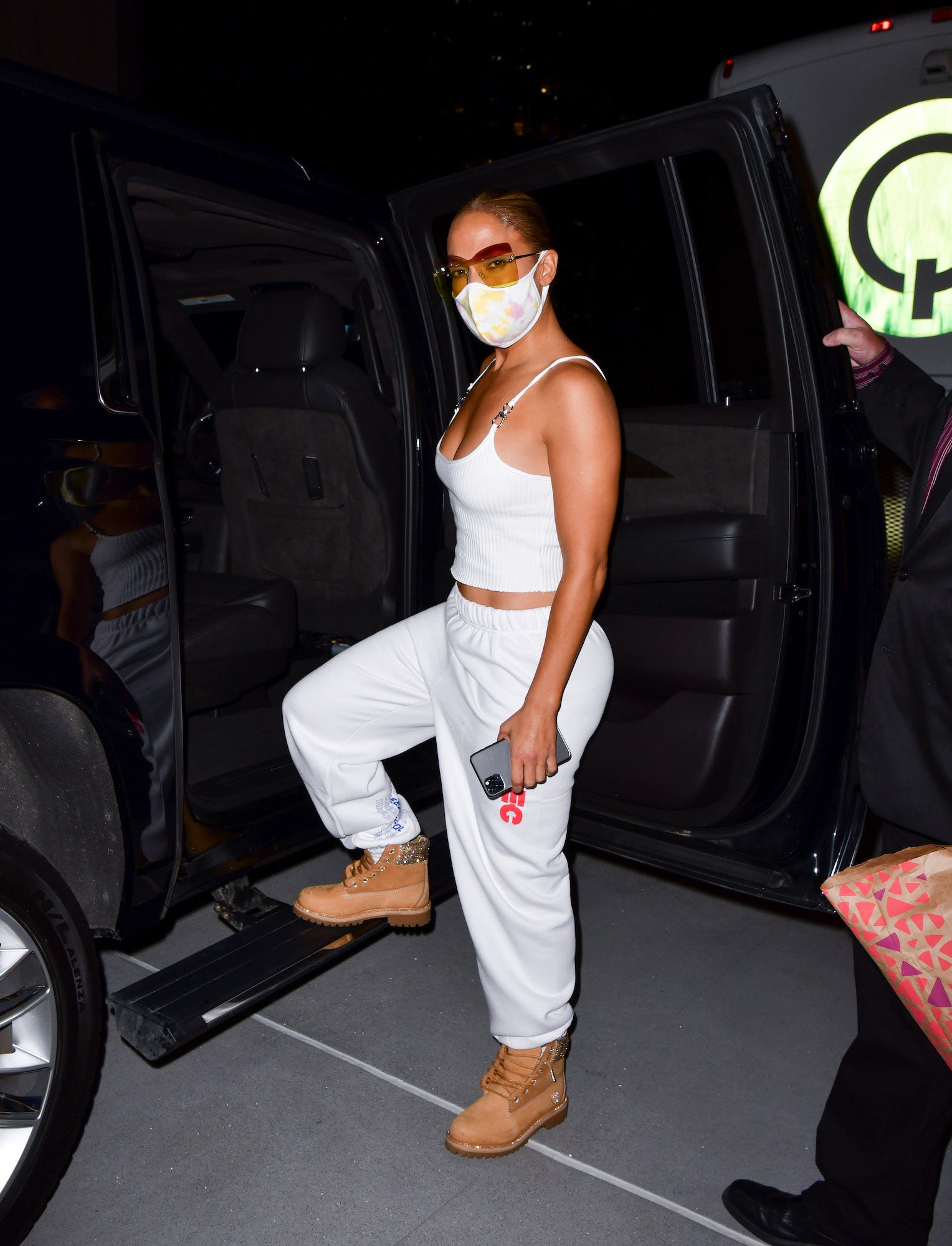 Her face mask, which was white with splatters of pastel colour, added a modern twist to her otherwise nostalgic look.