A photographer captures haunting nighttime images of abandoned buildings, planes, and cars in the American Southwest 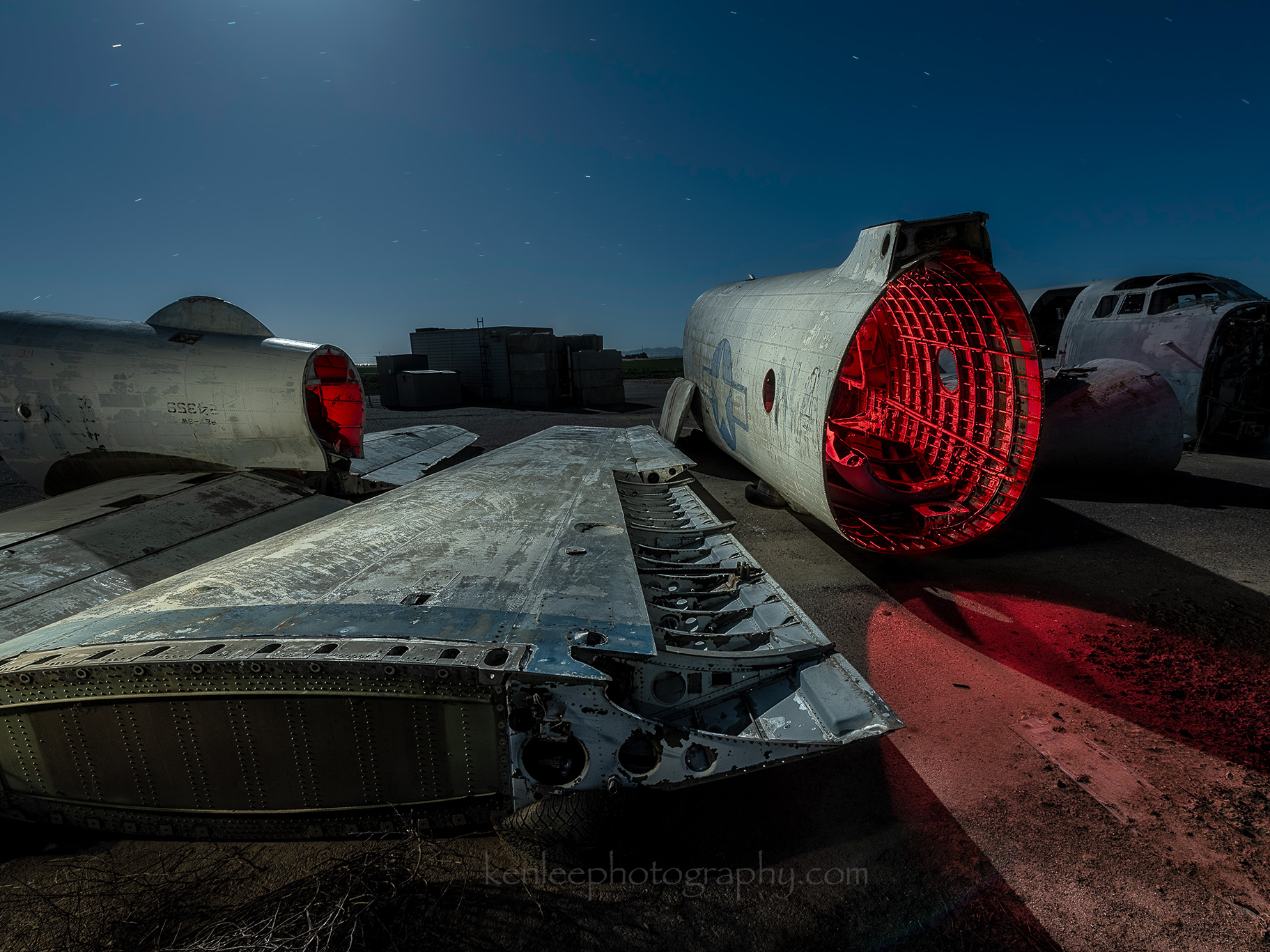 Ken Lee is a photographer based out of Southern California who has been practicing night photography for about seven years.

“In the early 2000s, I was walking down the Venice boardwalk and saw this guy with some film photos of Joshua Tree National Park, and they were taken at night,” Lee told Insider. “I remember him saying, ‘There’s more light at night than you think there is,’ and that stuck with me.”

After visiting the Atacama Desert in Chile, Lee was equally struck by how clear and beautiful the night sky was. It inspired him to learn night photography and he started shooting two or three years later.

Largely self-taught from tutorials on YouTube, Lee travels hours from home to capture photos of abandoned and forgotten parts of the Mojave Desert, Joshua Tree National Park, and more.

Here are 25 pictures of abandoned buildings, planes, and more, long-forgotten in the American Southwest.

Photographer Ken Lee travels hours from his home to capture nighttime images of abandoned structures or planes, like this bullet-riddled military aircraft. 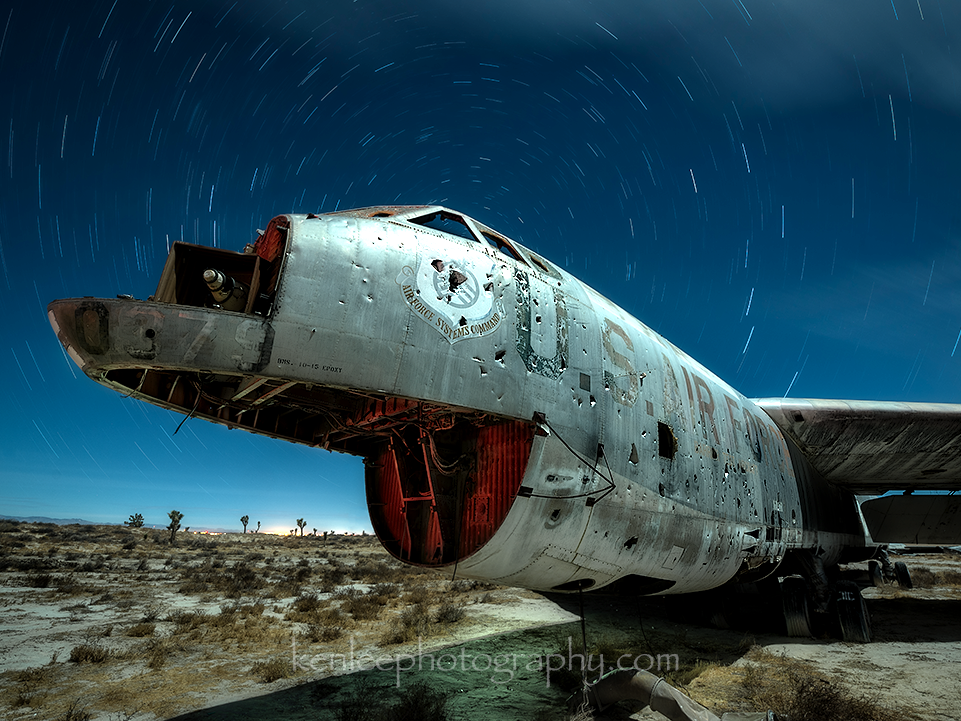 “The streaks in the night sky are star trails created by the movement of the stars during the long exposure photo, accompanied by some beautiful high clouds this cold moonlit winter evening,” Lee told Insider.

He took this spooky photo of an abandoned airship in the desert during a week-long, 1,582-mile road trip. Ken Lee‘Empire of the Clouds.’

Lee said that while the shutter of the camera is open, he is able to shine a handheld light on his desired subject and create the image. It takes only a few minutes to take the photo, and it usually takes about two or three tries to get the perfect shot.

“I largely leave the photo alone after that,” Lee said. “I’m not inserting things into it. There are special considerations with night photos, so the only real editing I do is in regards to noise reduction, mostly to the sky and shadow areas.”

At first glance, you might not realise that this photo of an abandoned aeroplane was taken at night. 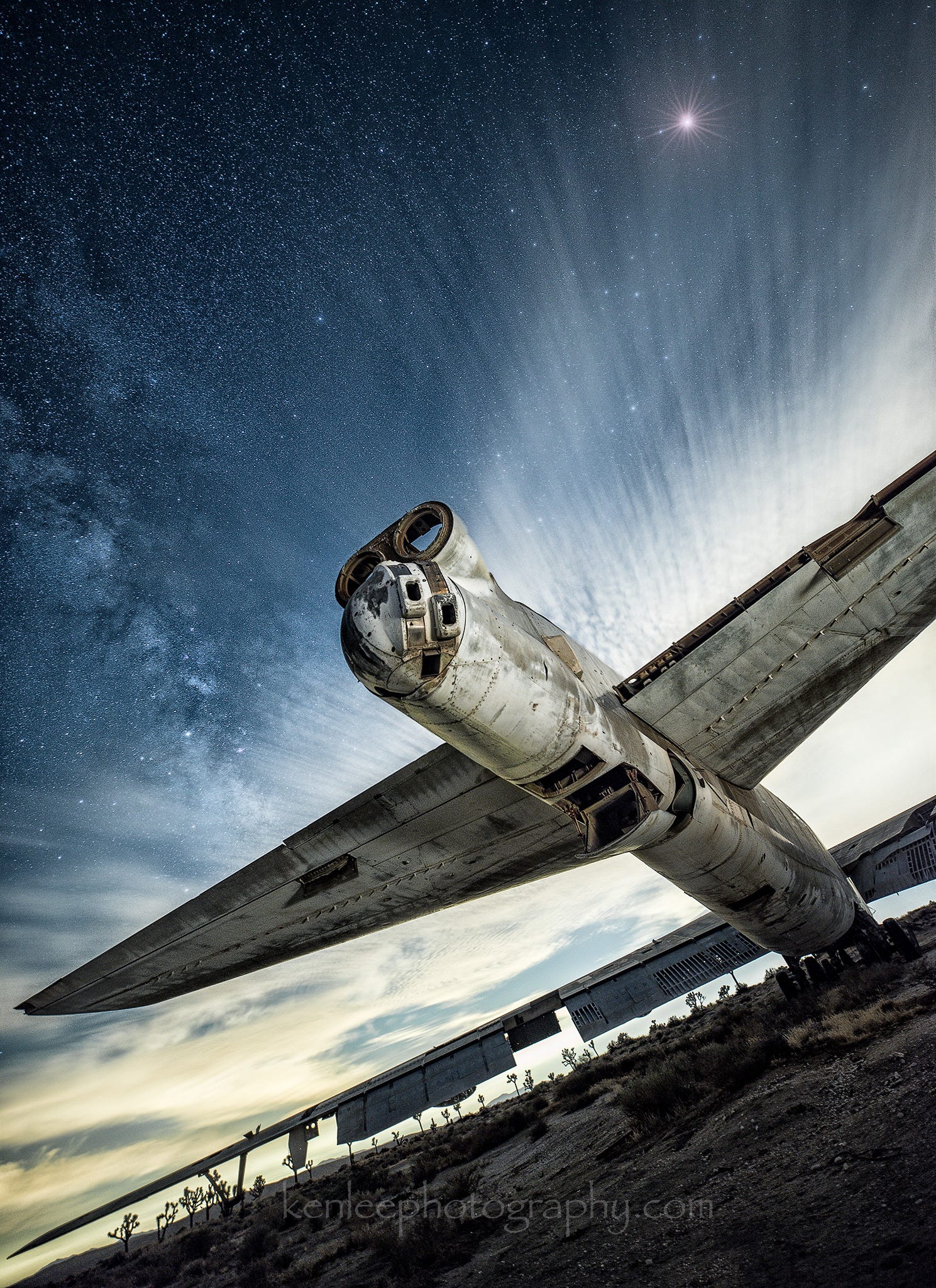 “It looks like an aeroplane with flying goggles, ready for the cosmos and what that may bring,” Lee said. “The aeroplane occasionally creaked, which startled me from an otherwise peaceful evening.”

This particular photo is the cover of Lee’s new book, “Abandoned Southern California.”

While spending time with other night photographers, Lee captured this image of a structure covered in guerilla art. When it comes to choosing places to shoot, Lee said, “the weirder the better.”

He was exploring and photographing the Mojave Desert when he came across this abandoned laundromat. 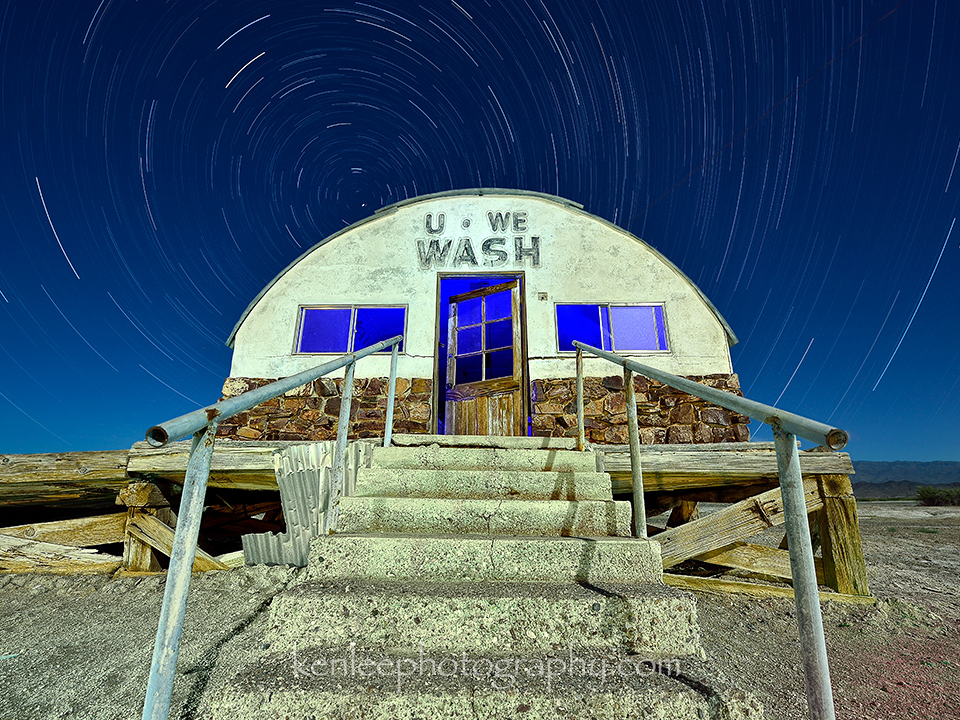 Lee said part of the excitement of shooting abandoned places is discovering the stories behind them.

He has also photographed the abandoned remains of aircraft from the Cold War. 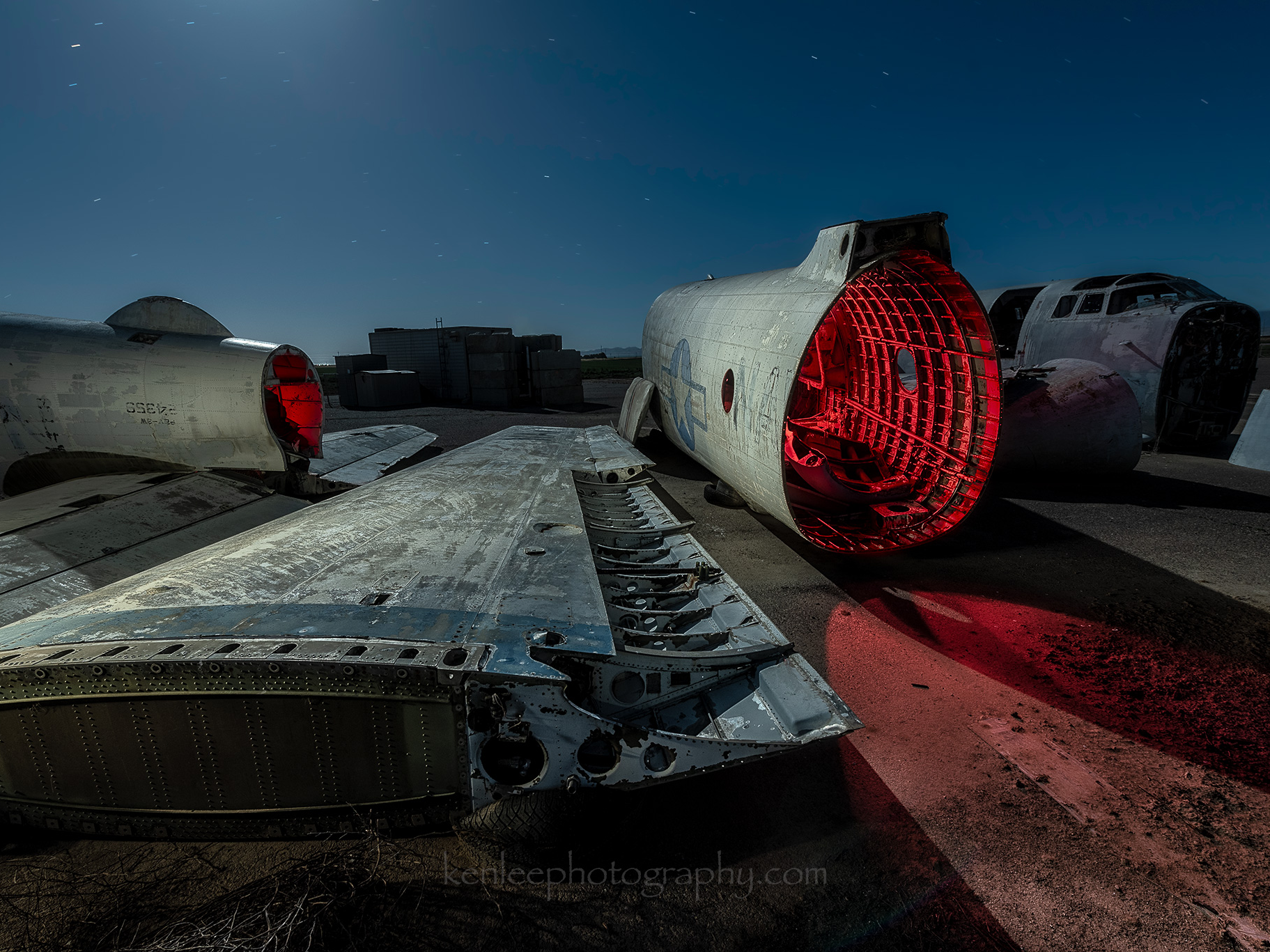 Lee photographed this decommissioned airfield during one of his excursions.

One abandoned relic Lee came across was this separated tail of a B-52 aircraft from the Cold War. 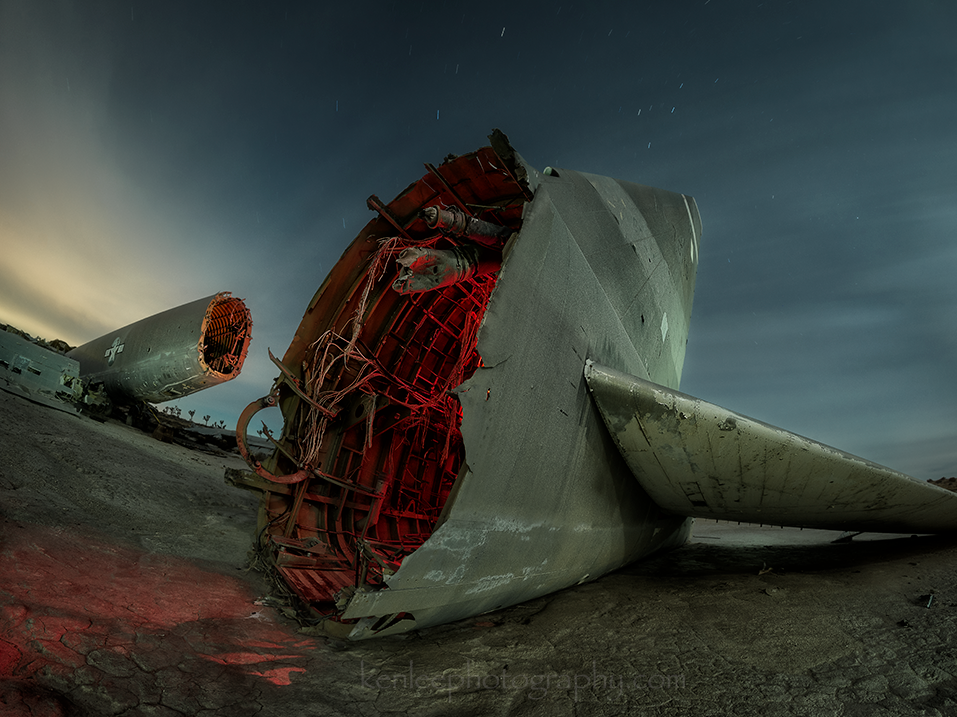 Ken Lee‘We Really Move Our Tail For You.’

“This photo, titled ‘We Really Move Our Tail For You,’ is my favourite photo from the book,” Lee said. “It really captures the violence that I imagine happened.

“In the distance, you can see the rest of the fuselage. It reminds me of something from a whale hunting expedition. It’s so haunting.”

This long-exposure photo shows a Lockheed Harpoon on the decommissioned airfield. 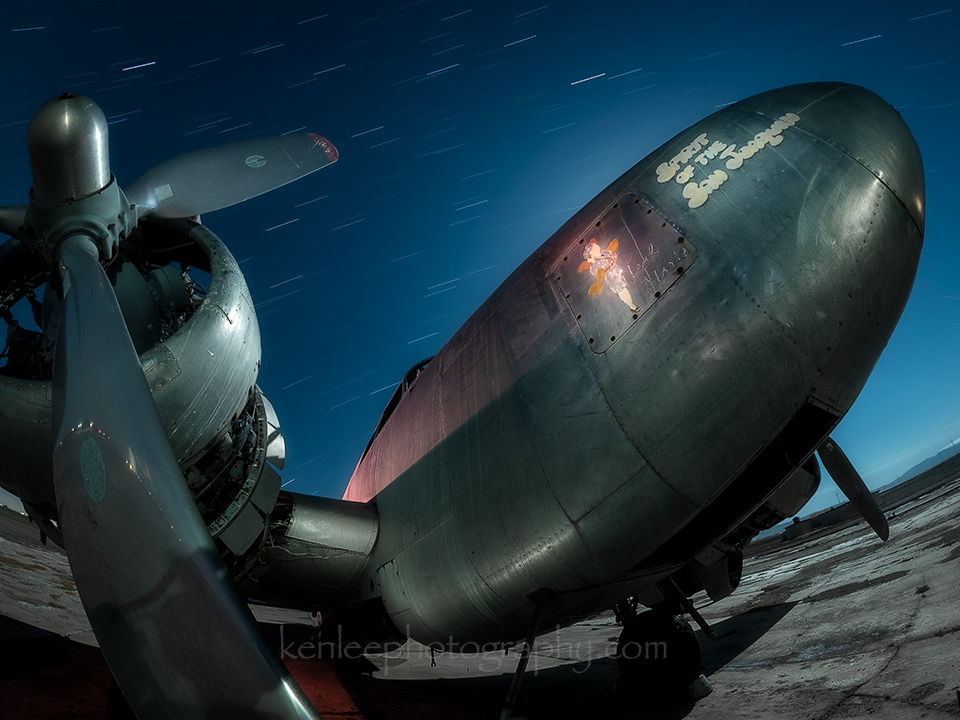 Ken Lee‘Spirit of the San Joaquin.’

The plane was first used in World War II.

Night photography can be a completely different experience than taking a photo during the day, Lee said. 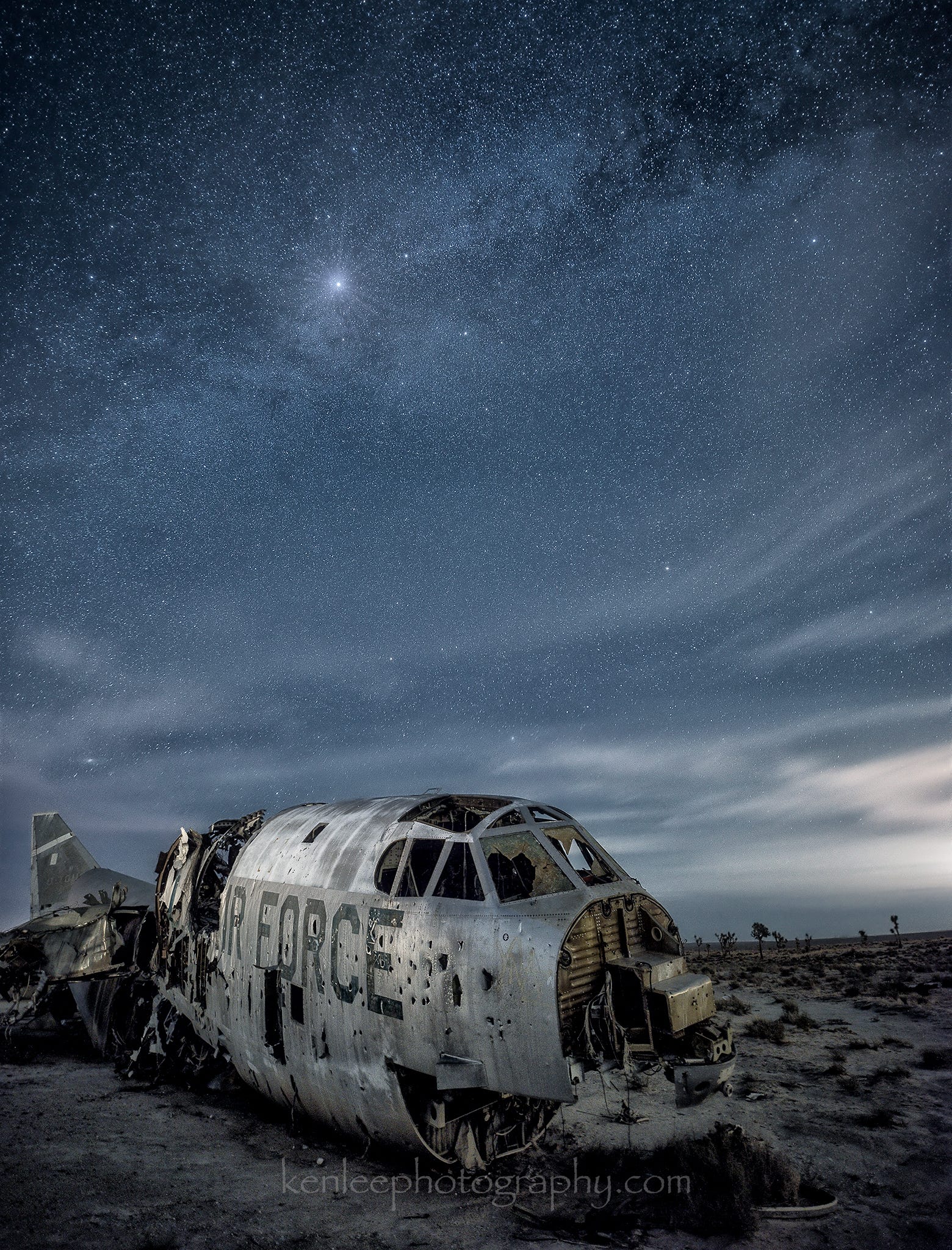 “Night photography really lends itself to these abandoned places, because you can manipulate the light almost like a director controls the camera,” Lee said.

There were also a few rusted vehicles lying around. 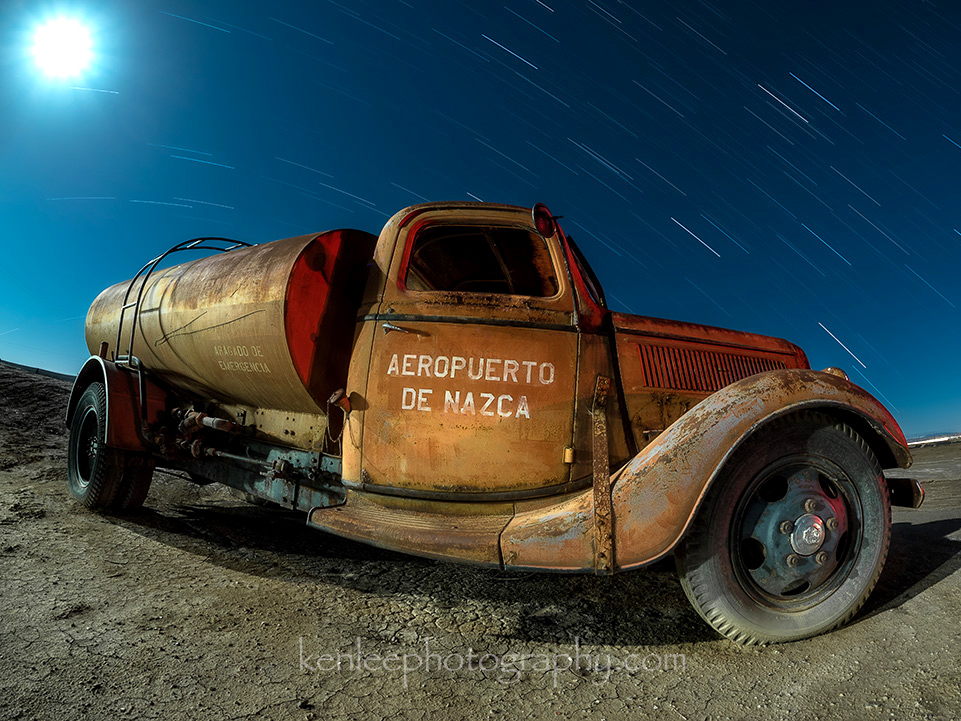 “As a kid, I loved Indiana Jones movies, and so I was excited to photograph the Aeropuerto de Nazca fuel truck used in one of those movies, now rusting away in the decommissioned WWII airfield,” Lee said.

Though it may not look like it, these signs at an abandoned highway stop in Halloran Springs, California, were also photographed at night. 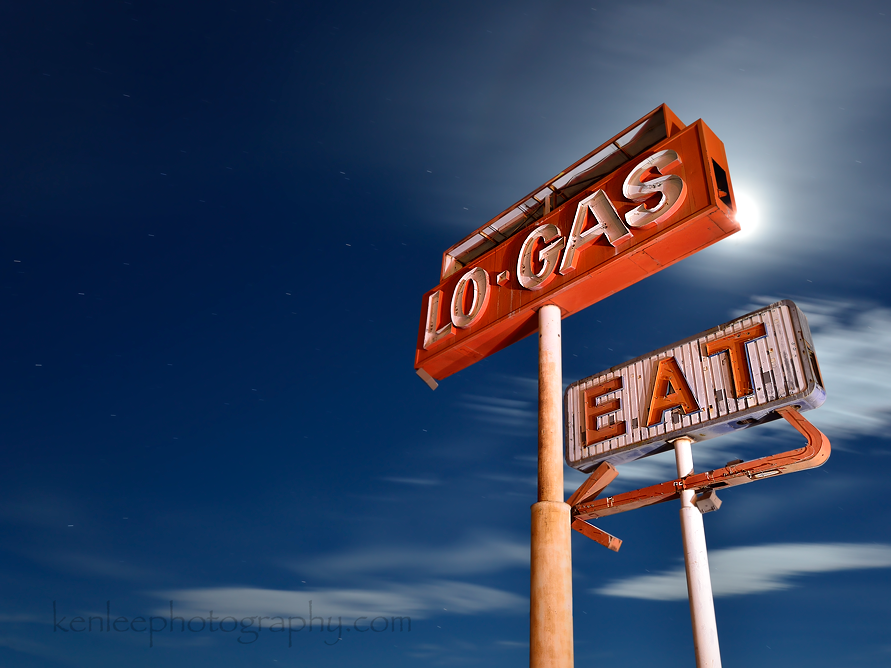 “This particular evening, everything was illuminated by a big bright moon, an almost full moon, almost bright enough to read a book,” Lee said.

In order to light the photo even more, however, Lee said he illuminated the sign with a handheld LED flashlight while the camera shutter was open.

Some areas are harder for Lee to get to than others, and come with their own unique challenges. “Most of these areas aren’t listed. It’s not like you can type it into Google Maps like you would a McDonald’s,” Lee joked. “It’s a lot of looking on YouTube or other blogs and finding places that other people have gone.”

“I’m attracted to places that are in the middle of nowhere because they have this forlorn quality to them,” he added.

One of the most challenging series of photos Lee has taken was of these abandoned cars. 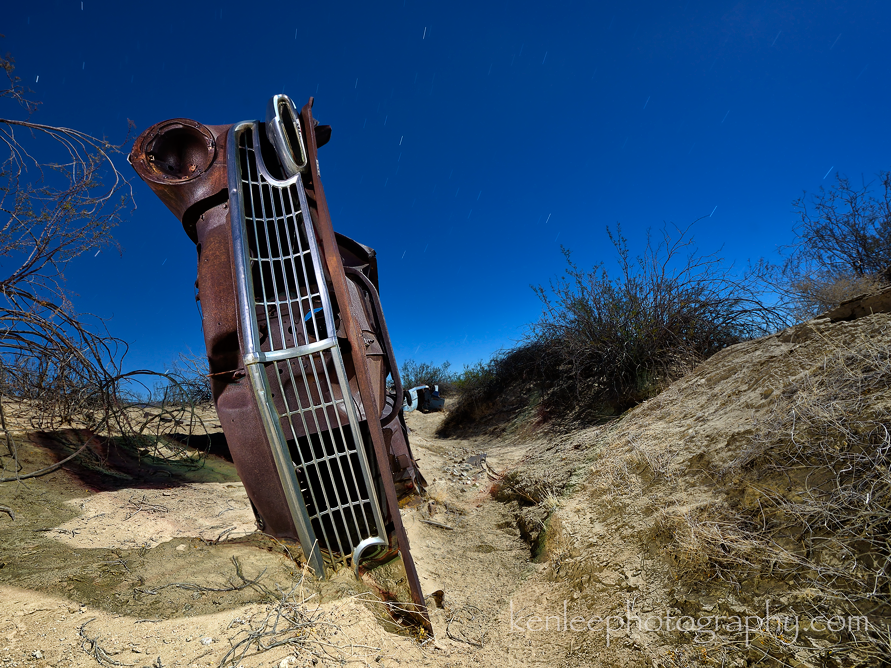 Ken Lee‘I Guess I Should have Known By The Way You Parked Your Car Sideways.’

While visiting an auto salvage yard in the Mojave Desert, Lee had to take special precautions to ensure his own safety while out photographing the off-the-grid area.

“It was 10 miles on a dirt road from the nearest paved road, and then about a mile-and-a-half walk across the desert with no discernible trail to get to the place. That was very difficult to get to, and there was no cell phone reception so I had to really prepare ahead of time in case my car broke down,” Lee said.

Lee brought extra food, water, and camera equipment with him to photograph the long-forgotten vehicles. 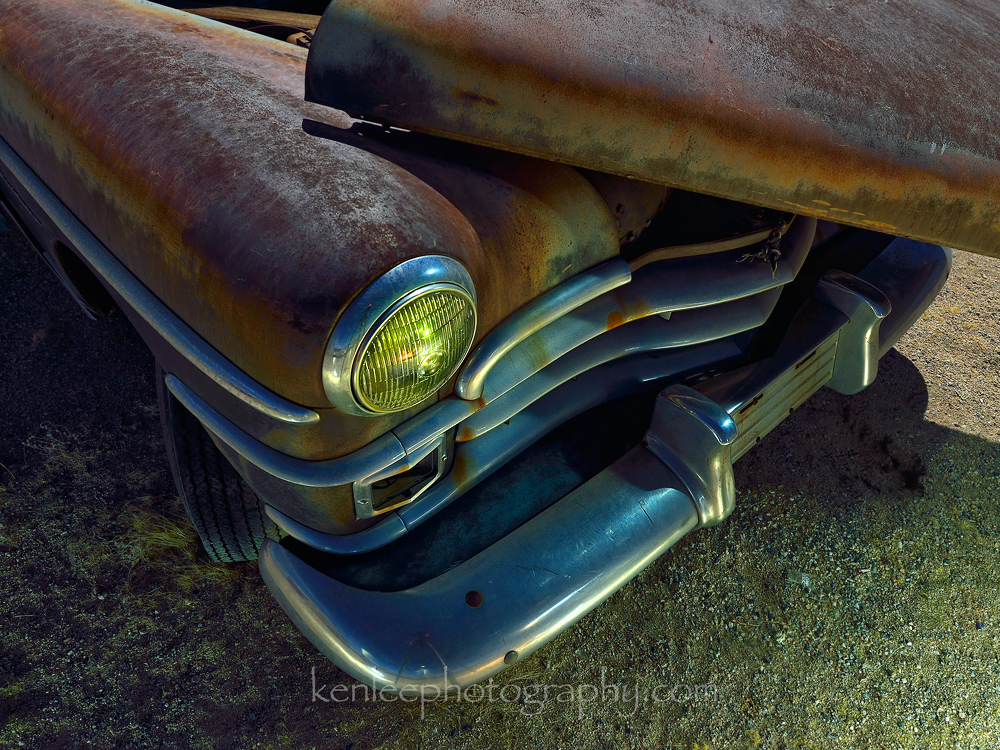 Despite the challenges, Lee said the most intriguing part of photographing these places, and why he keeps going back for more, is the mystery behind them.

This photo of an abandoned 1951 Ford truck was taken in the Mojave Desert during a full moon. 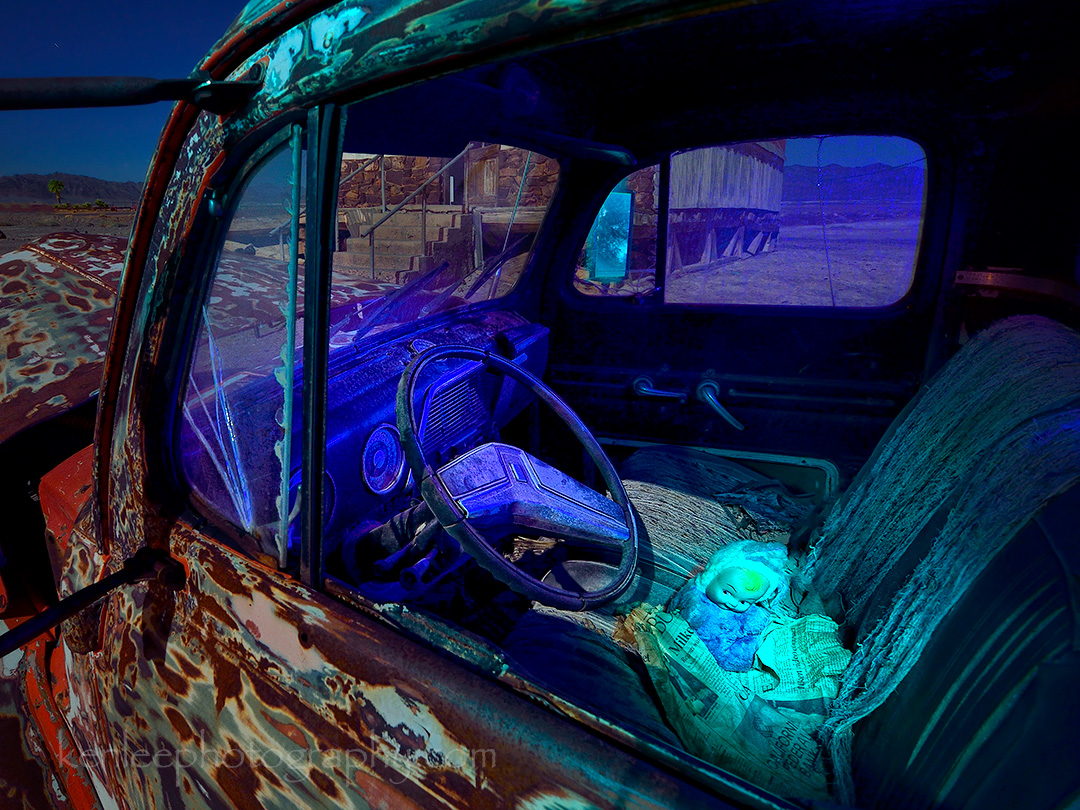 Lee illuminated the truck with different colours from a handheld flashlight while the shutter of the tripod-mounted camera was open, creating the eerie, blue and green light effect.

While Lee has tried to do his research on most of the places he’s visited, some still remain a mystery. 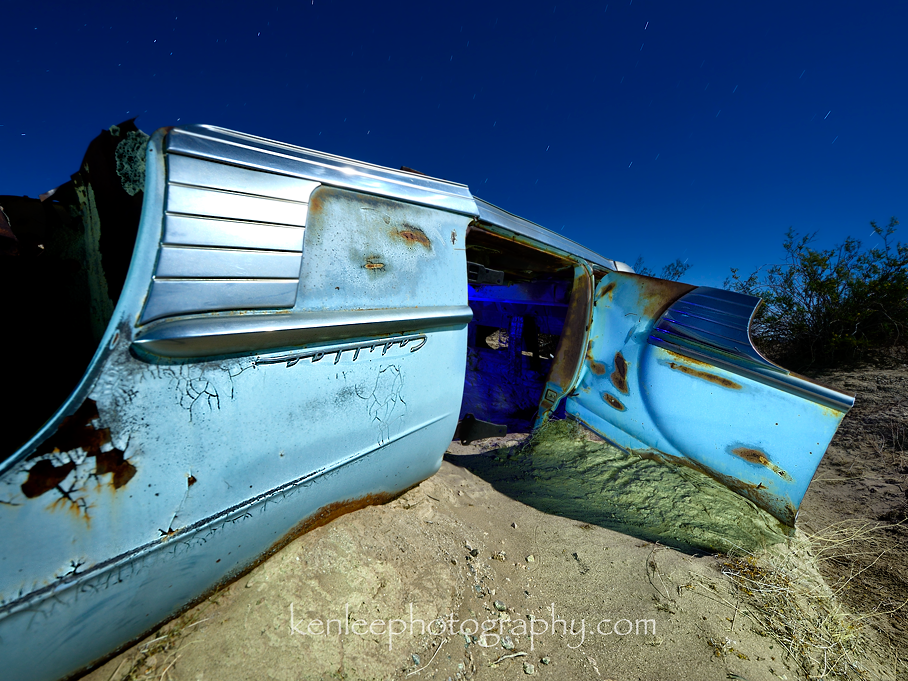 “I can’t find a thing on why these cars are jammed on their sides and filled with sand. I’m going to have to try a little harder and try talking to some rangers to find out the story behind this place,” he said. 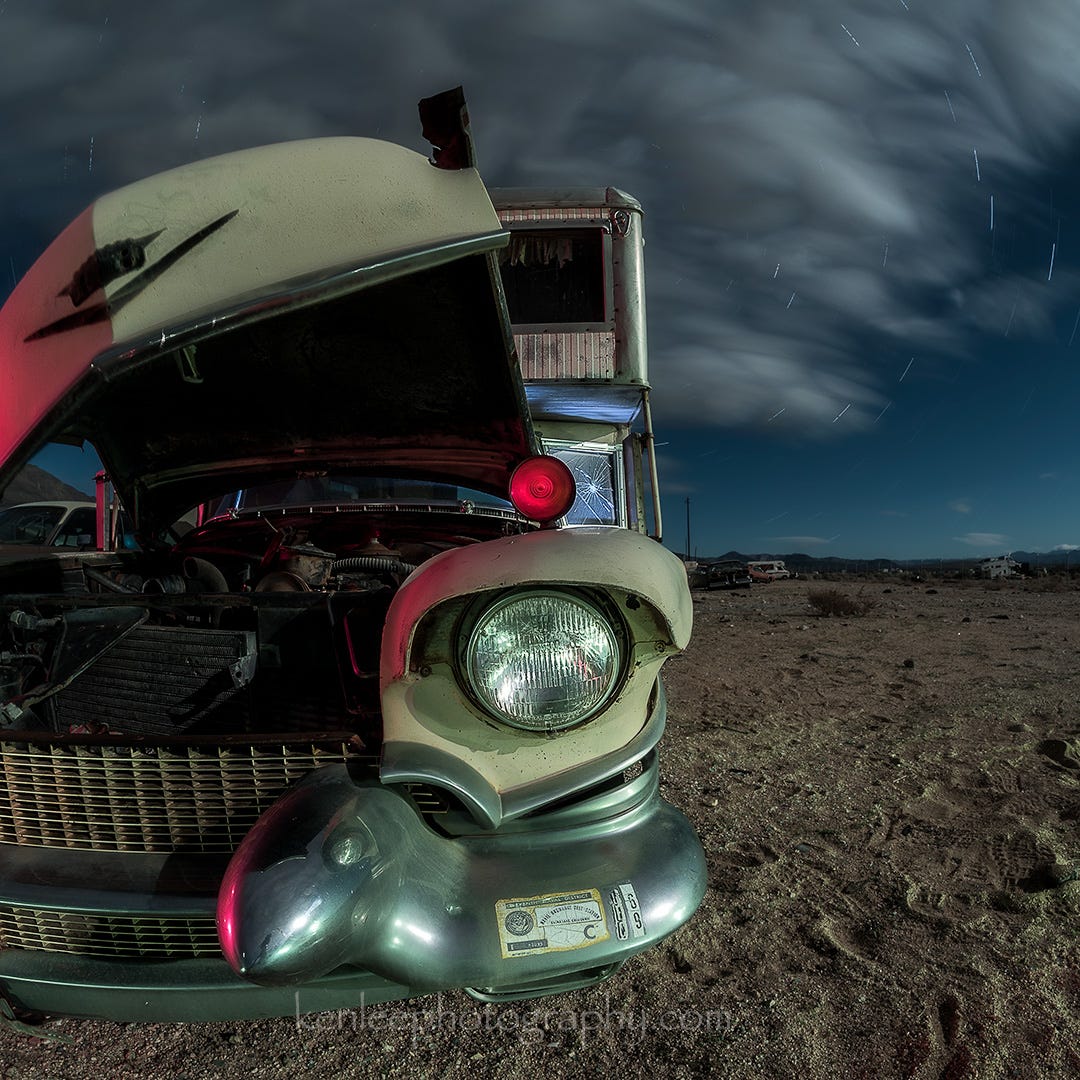 Through his work, Lee has been able to become a part of the night photography community.

“Some of the nicest people I’ve met are night photographers … They all understand and love the meditative, very deliberate process of creating night photos while lighting during the exposure and the active creativity that this entails.” 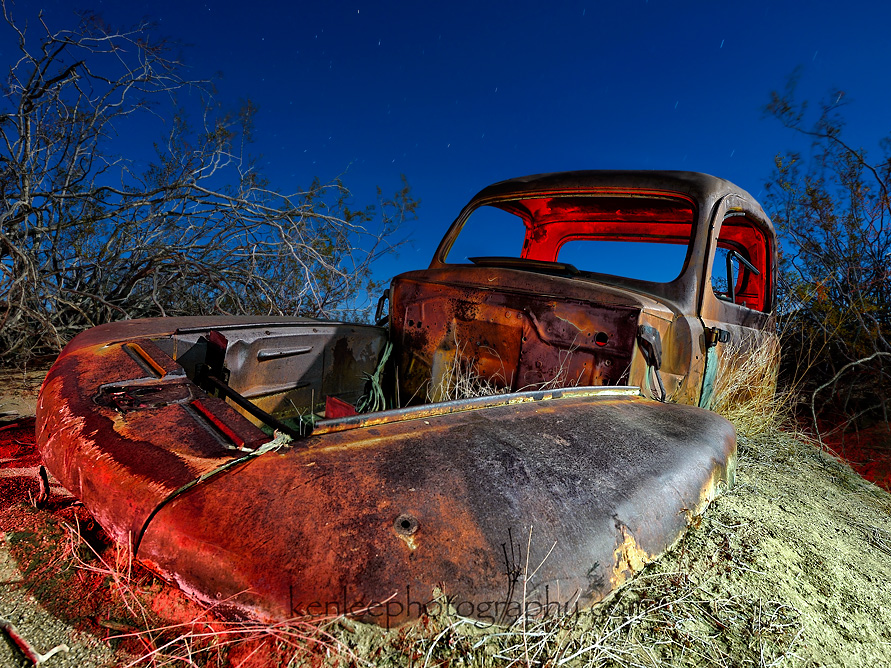 Ken Lee‘Rolling In the Deep.’

“Some things are hard to research, and others open up fairly easily,” Lee said.

After walking a mile through the desert, Lee said he came across some fascinating carved rocks left by a former miner and rancher in the 1920s. 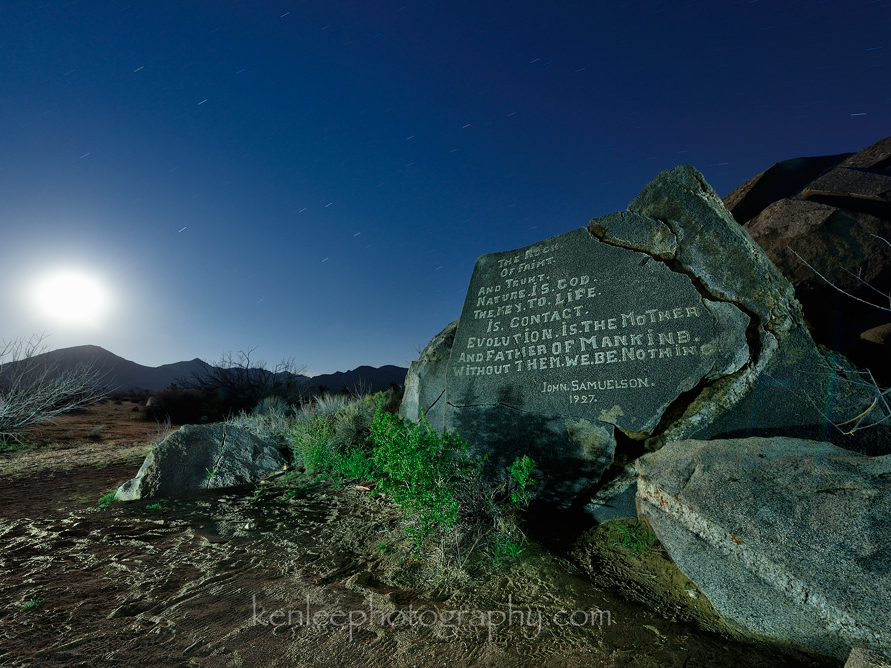 “I am grateful to my handy GPS, and not so grateful for the cactus that nailed me on the return trip,” Lee said.

His research revealed the history of the area.

“John Samuelson was a miner and rancher for the Keys Ranch,” Lee said. “In the 1920s, he built a cabin and began carving messages into the rocks nearby in what is now Joshua Tree National Park. He eventually moved to Los Angeles with his wife, where he then killed two people in Compton. He was declared insane, but later escaped from the hospital.” He comes prepared for any hazard while walking through abandoned buildings.

“Anytime you walk into an abandoned house or building, it’s always a challenge to make sure you don’t put your foot through the floorboard or having sharp nails or broken glass. I have boots with steel shank soles specifically for exploring abandoned buildings in,” Lee said. “I also bring breathing masks, flashlights, and sometimes I even wear knee pads.”

Standard buildings aren’t the only structures Lee has come across in his travels. 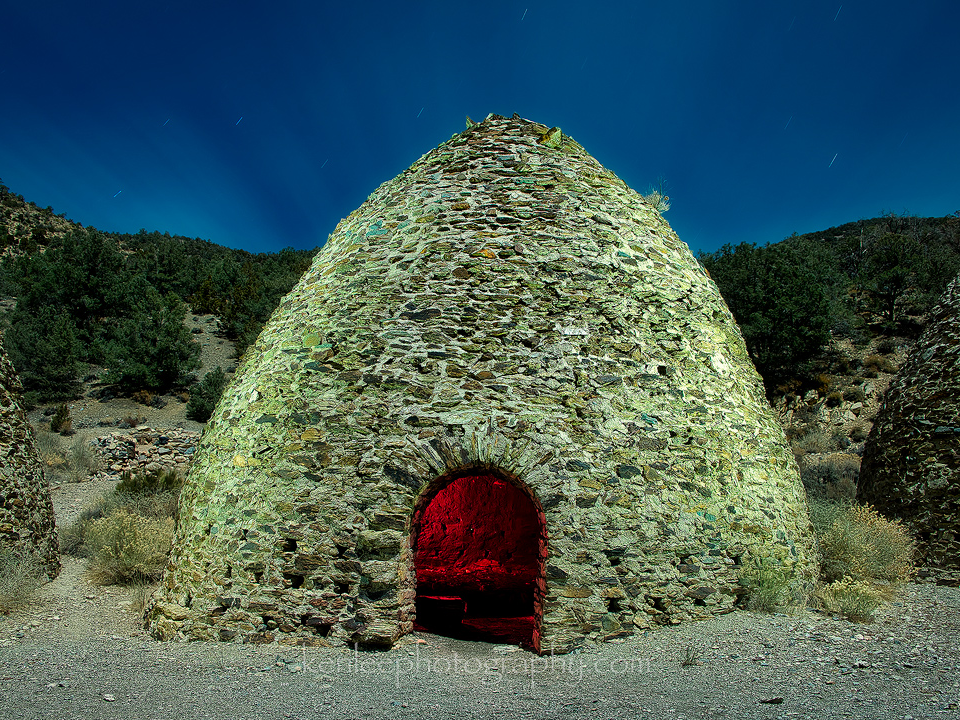 Built in 1877, the Wildrose Charcoal Kilns can be found higher up in the mountains of Death Valley. Lee believes that these 25-foot tall kilns were used only for a couple of years, which could explain why the kilns are still so well intact.

According to Lee’s research, the kilns were built to fuel two lead and silver smelters located roughly 25 miles away. 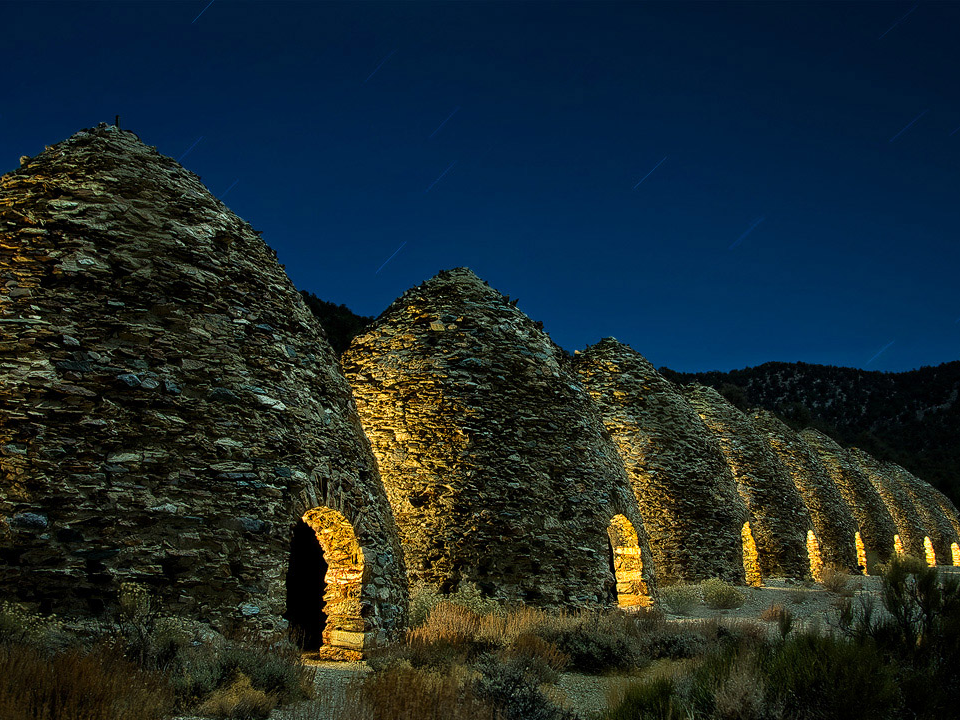 Ken Lee‘The Glow of the Wildrose.’

“Part of the fun and the thrill and the chase is finding the most obscure place no one else knows about,” he said.

Lee also managed to photograph this abandoned mineral spa. Though the photo is colourful, Lee said it was taken in total darkness. 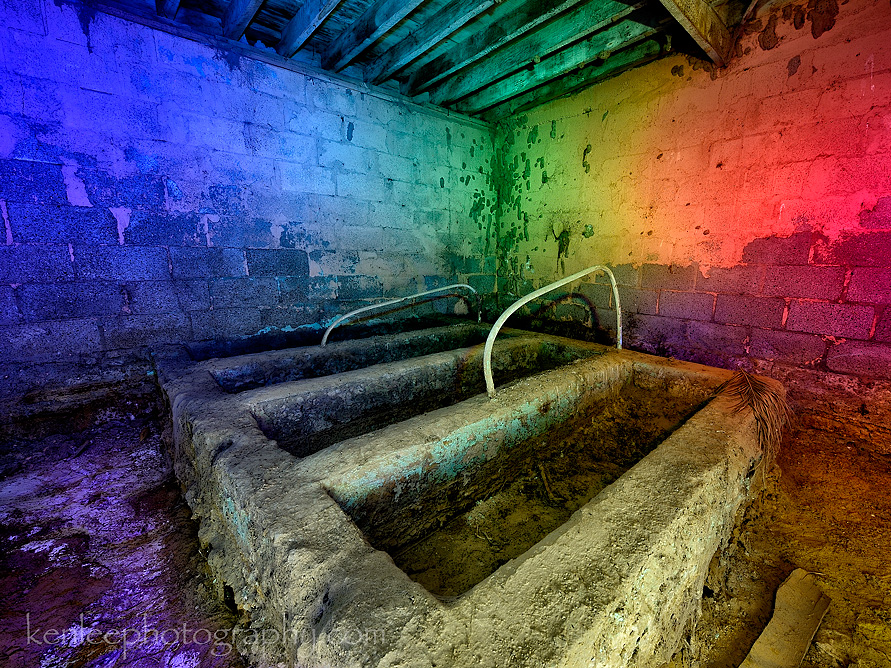 “The walls were covered with mud wasp nests, and there were some bats flying around,” he told Insider. 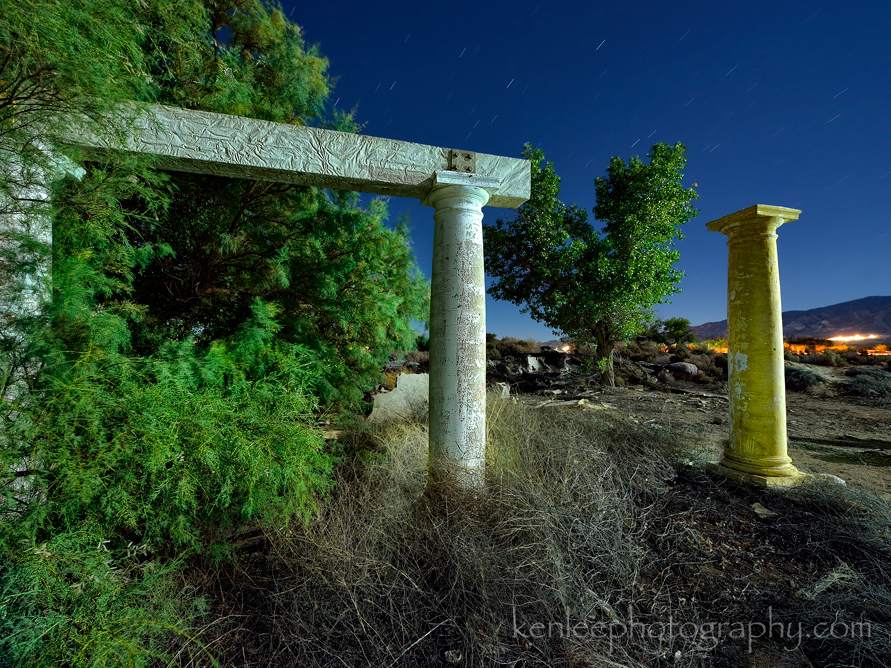 “Everything here was very consistently Roman or Greek looking, and the old set location was littered with columns, some standing, some fallen, as well as busts, statues, reliefs, stands, and plaster molds,” Lee told Insider.

Though it’s unknown what was filmed out in the desert, the abandoned set is undeniably eerie. 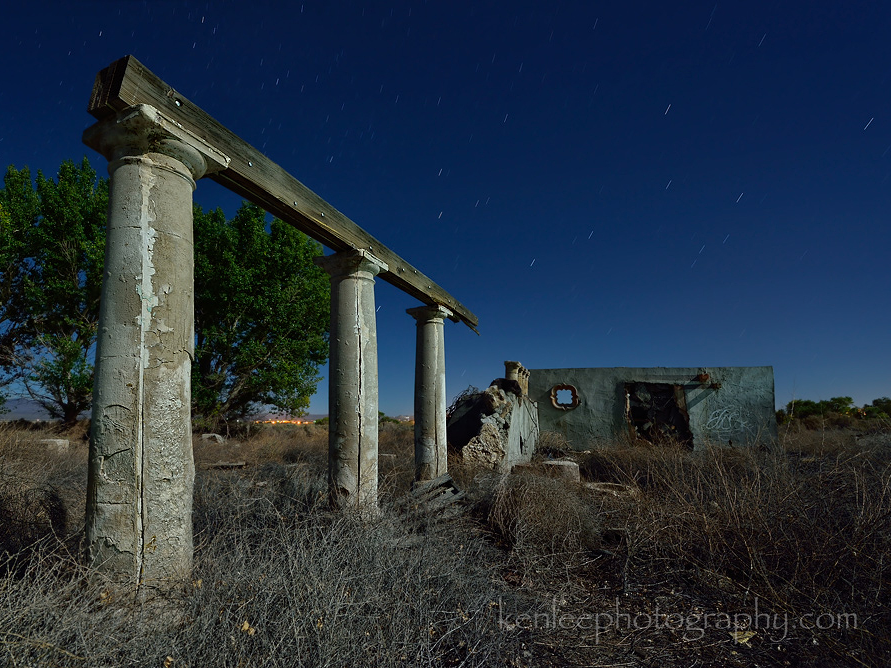 Ken Lee‘The Rise And Fall of the Roman Movie Lot.’

Lee has words for those thinking of taking up night photography.

“It’s extremely addicting. Once you start, you’ll wonder where all your time went. Night photography can be daunting at first since it’s so different from shooting during the day – it requires a lot of patience. Within that patience, there’s a meditative quality to it,” Lee said. “You’re making the photo, not taking one. It’s incredibly creative.”