Business Insider could not verify the authenticity of the photos.

Kim attended the completion ceremony of a fertiliser plant north of the capital, Pyongyang on Saturday, marking his first public appearance since April 11.

Rumours had circulated that Kim might be dead, but US and South Korean intelligence services expressed scepticism over such reports, the Washington Post reported in late April.

The North Korean leader’s younger sister Kim Yo Jong joined her brother on the visit to the fertiliser plant, according to KCNA. She’s the most powerful woman in North Korea, and it’s speculated she would take over as the leader of the rogue state in the event of her brother’s death.

“He had never missed the anniversary for Kim Il Sung’s birthday since he took power, but many anniversary events including celebrations and a banquet had been cancelled because of coronavirus concerns,” the minister told a parliamentary hearing,per a Reuters report from Tuesday.

Scroll down to see photos of the North Korean leader touring the plant, speaking with aides, and smiling at a crowd of attendees.

After weeks of intense speculation about his health, North Korean leader Kim Jong Un made his first public appearance on Saturday, according to official news agency KCNA.

Kim attended the completion ceremony of a fertiliser plant north of the capital, Pyongyang and was accompanied by senior aides, including his younger sister, Kim Yo Jong.

In the pictures, which could not be verified by Business Insider, the leader is seen smiling and waving on a podium in front of a crowd of people. 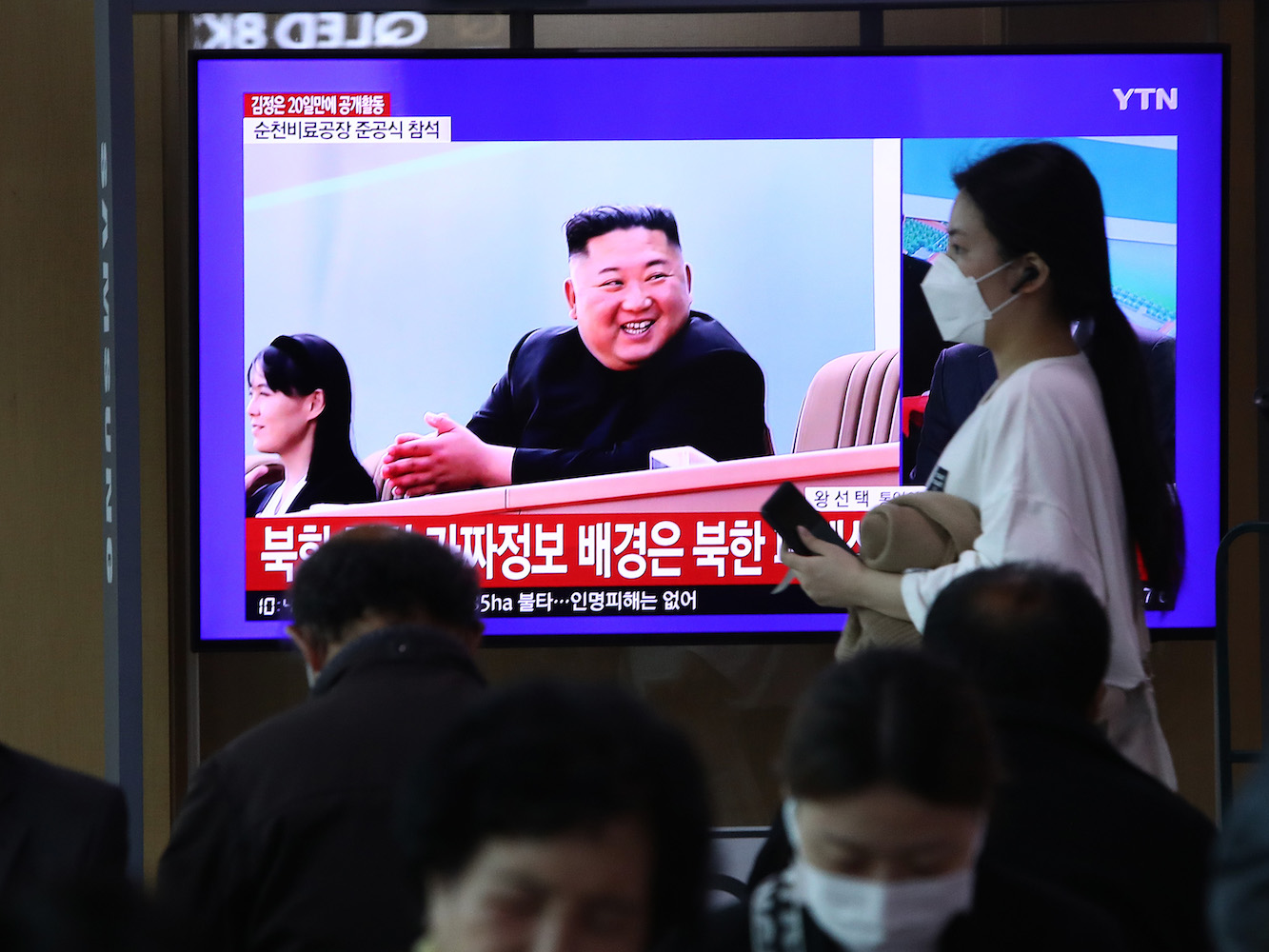 Chung Sung-Jun/Getty ImagesPeople watch a television broadcast reporting an image of North Korean leader Kim Jong-un during a news program on May 02, 2020 in Seoul, South Korea.

NK News also published a video of the leader touring the plant with his aides.

Kim Jong Un smoking and walking around the factory.

KCNA also reported that the people attending the event “burst into thunderous cheers of ‘hurrah!’ for the Supreme Leader…” In the footage, almost all attendants are seen wearing face masks. 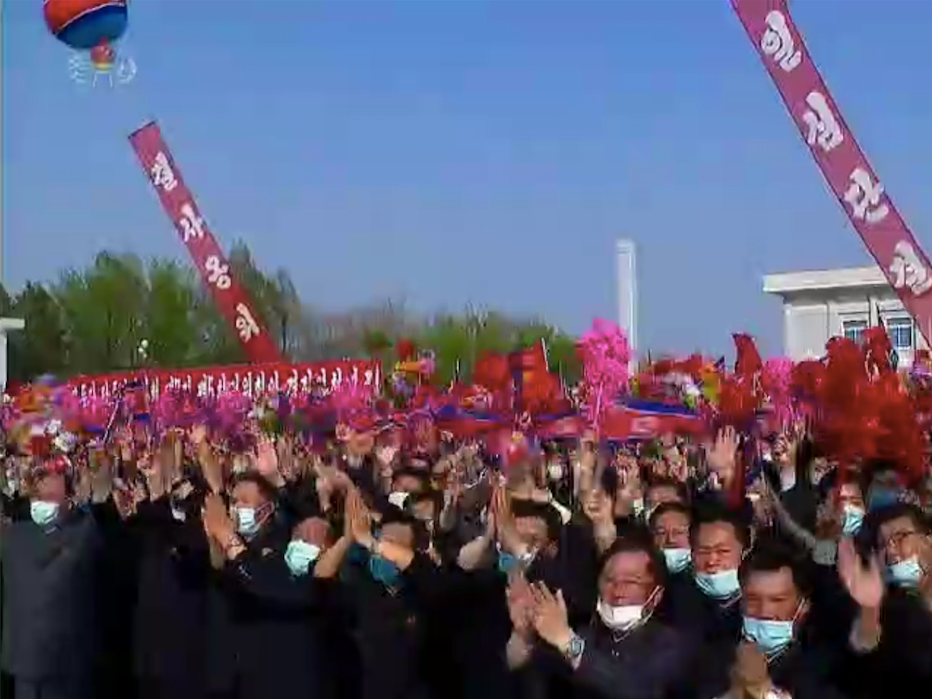 This is the first report of Kim’s whereabouts since April 11. 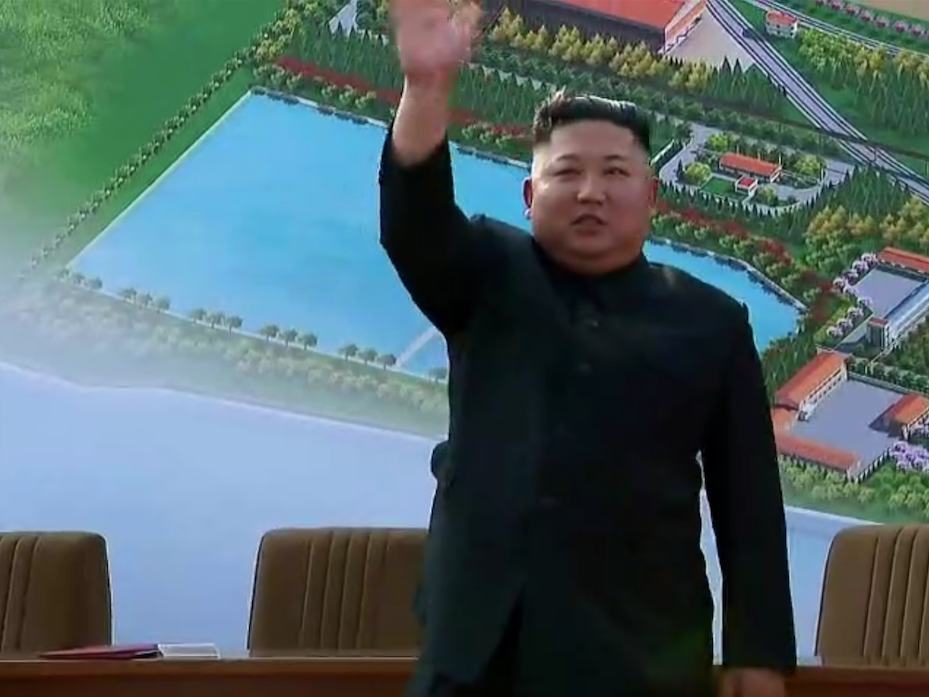 The rumours of his health started when Kim missed the annual birth-anniversary celebrations of his grandfather, state founder Kim Il Sung, on April 15. It is the country’s most important holiday. 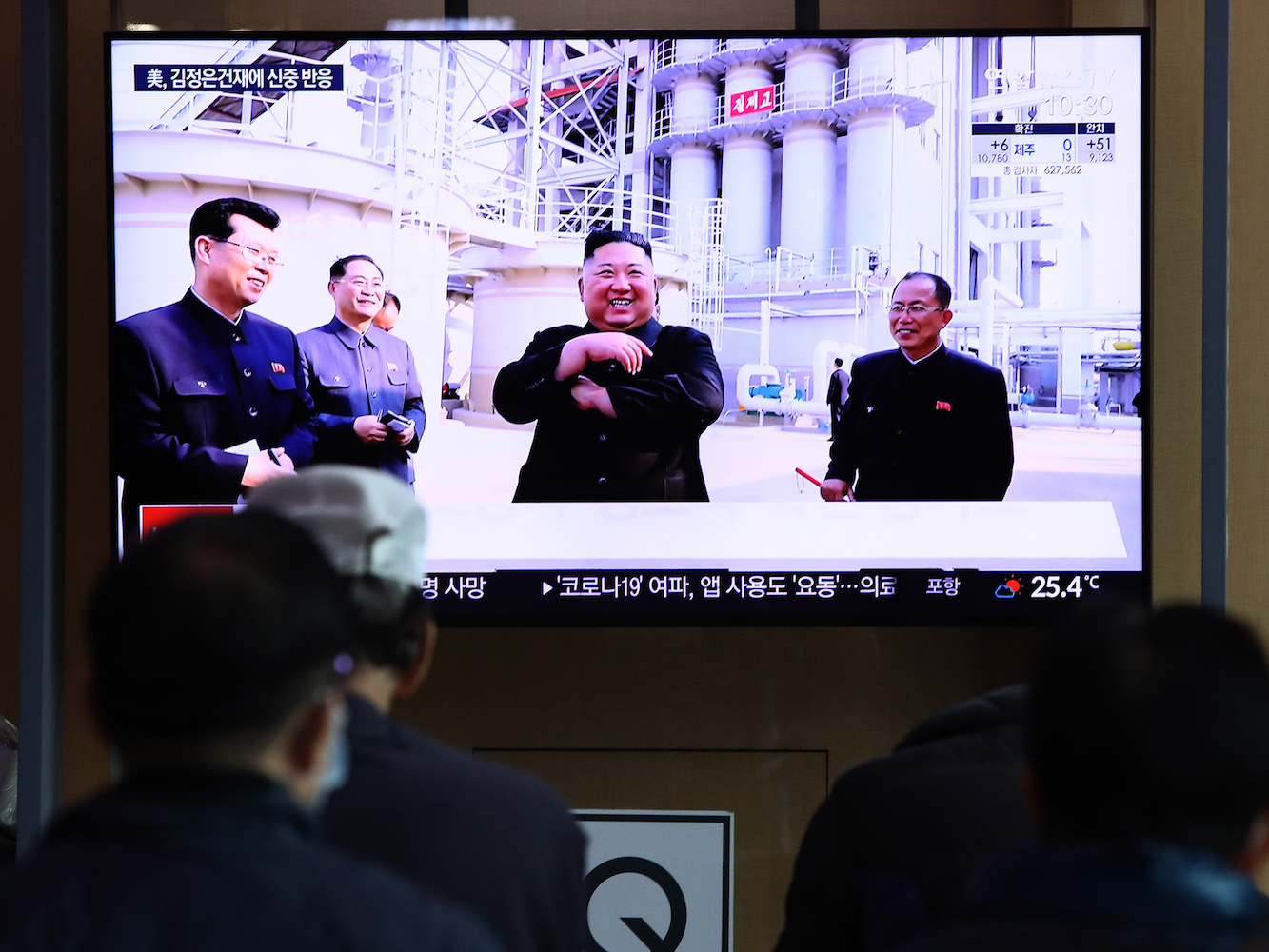 Chung Sung-Jun/Getty ImagesTelevision broadcast reporting an image of North Korean leader Kim Jong-un during a news program on May 02, 2020 in Seoul, South Korea.

Adding to the speculation, a South Korean news outlet that specialises in reporting the secretive state said that Kim had undergone a cardiovascular procedure and was recovering, although this report was unconfirmed. 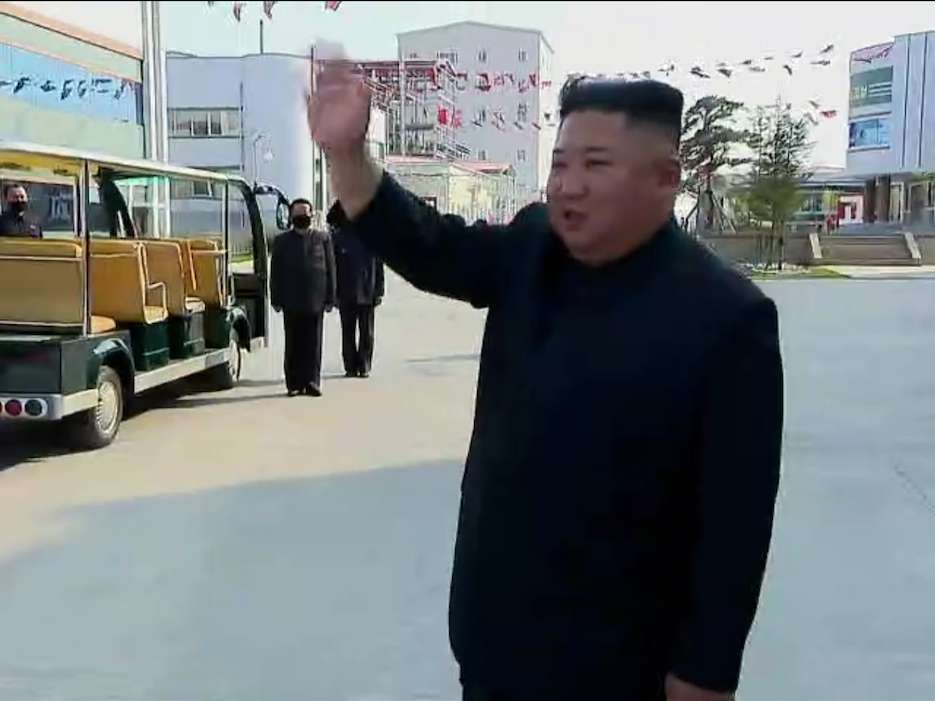 Satellite images released on April 29 showed a train usually used by the leader near a resort town, with people suggesting he may be staying there.

Kim’s absence also prompted the suggestion that the leader may have been taking precautions against the coronavirus. 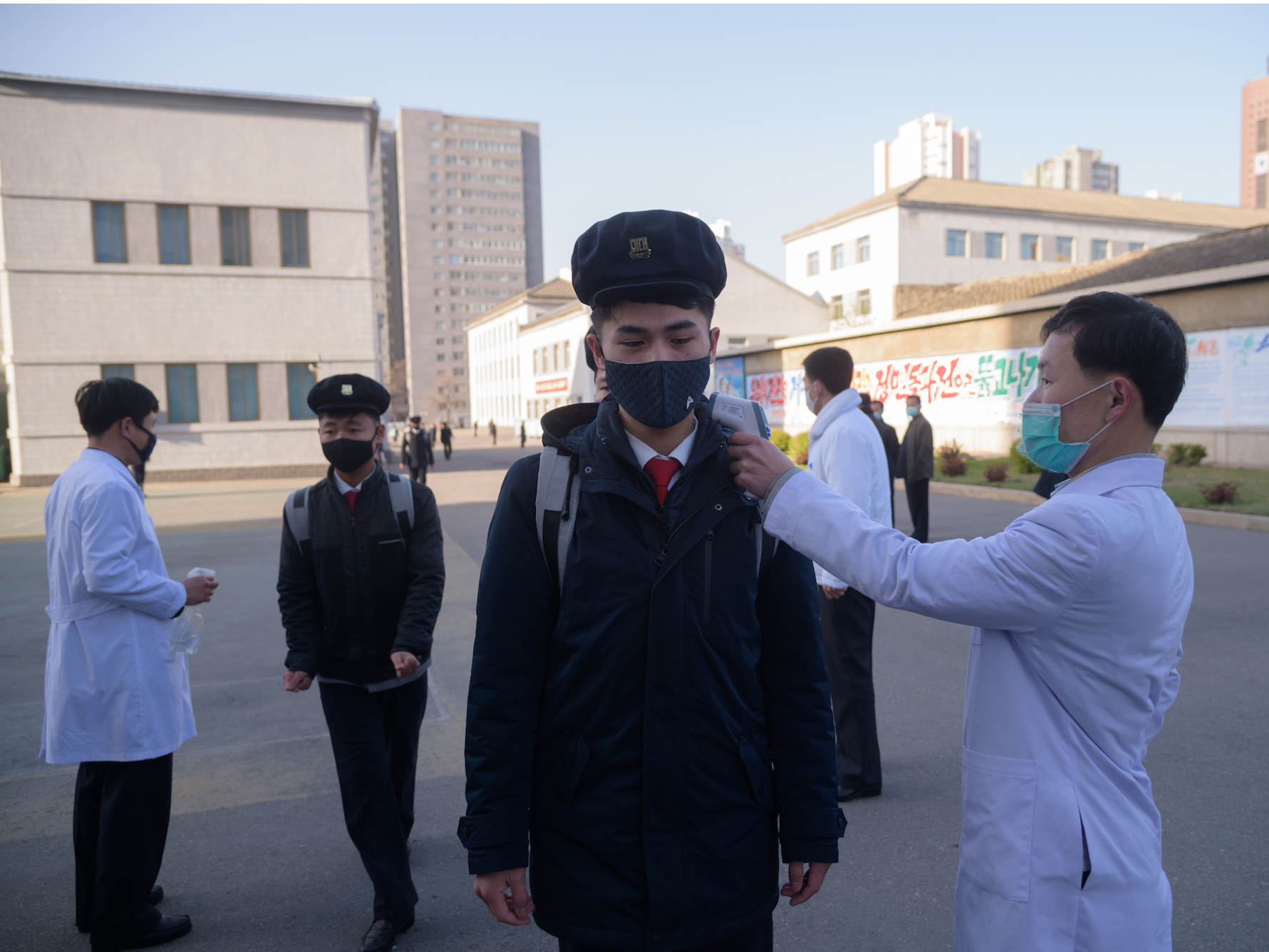 Kim Won Jin/AFP via Getty ImagesStudents wearing face masks disinfect their hands and undergo a temperature check as they arrive for a lecture on preventative measures against the COVID-19 novel coronavirus at the Pyongyang University of Medicine in Pyongyang on April 22, 2020.

North Korea has implemented some measures to prevent the spread of the coronavirus, but claims that its has no confirmed cases as well as fatalities.