London's 'thinnest' home is up for sale for $1.3 million. Take a look inside. 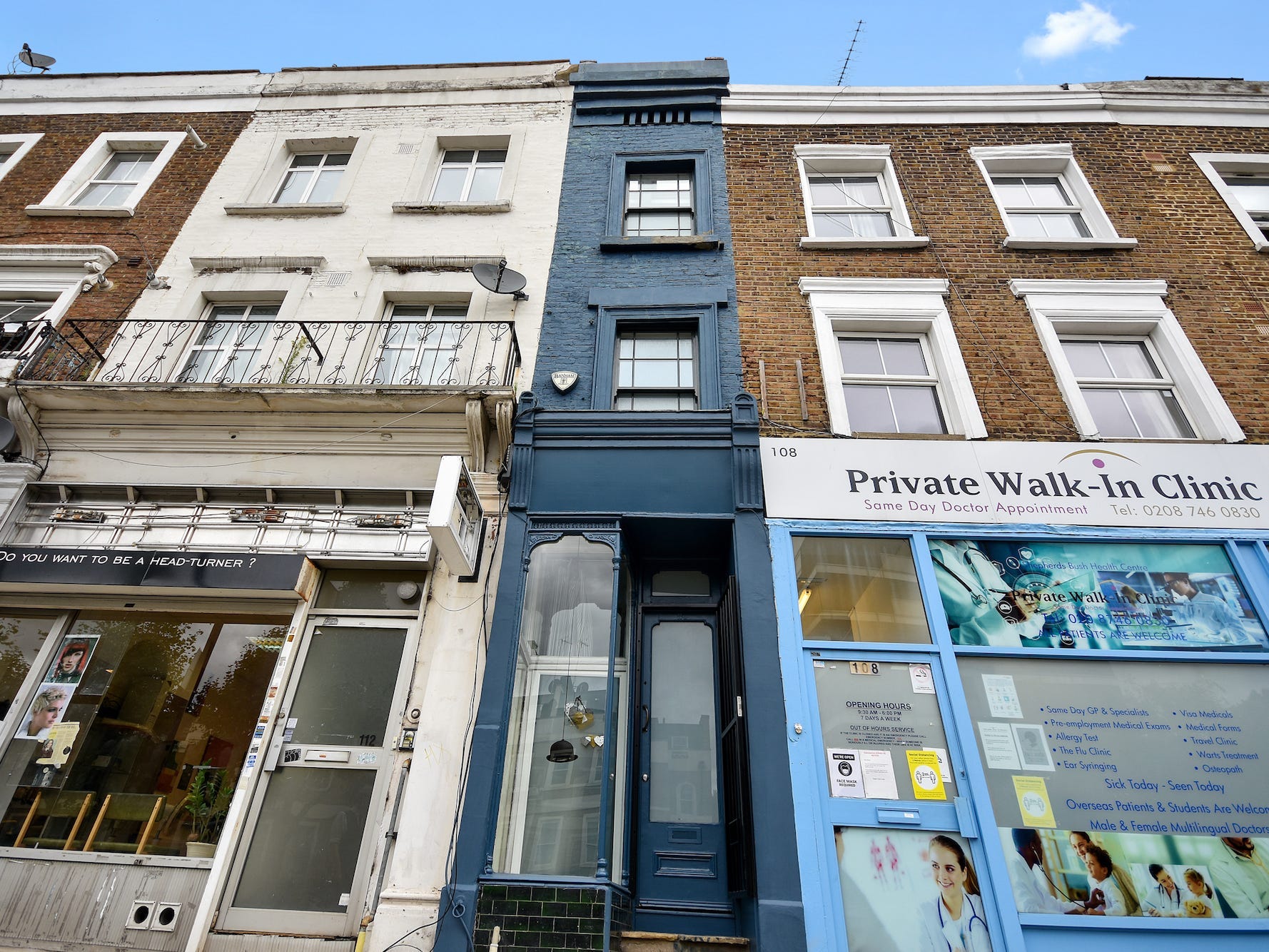 Winkworth Shepherd’s BushThe skinny home is painted a distinct shade of blue, and used to be a hat store.

A London property measuring just 6 feet (1.8m) wide that’s been described by its realtor as “possibly London’s thinnest home” is currently for sale for $US1.3 million (Â£950,000).

The house is located in Shepherd’s Bush, west London, and used to be a hat store. Fashion photographer Juergen Teller converted the store into a home in the ’90s, and “Pride and Prejudice” actor Simon Woods later lived in the home between 2006 and 2008.

The property was renovated by Teller to maximise space and despite its narrow width, boasts a generous 1,034 square feet over five floors. There are two bedrooms, a study, a bathroom with closet space, a roof terrace, and a landscaped garden.

Here’s what London’s “thinnest” home looks like on the inside.

The quirky home used to be a hat store and still uses the original shop window, featuring a bowler hat lampshade. 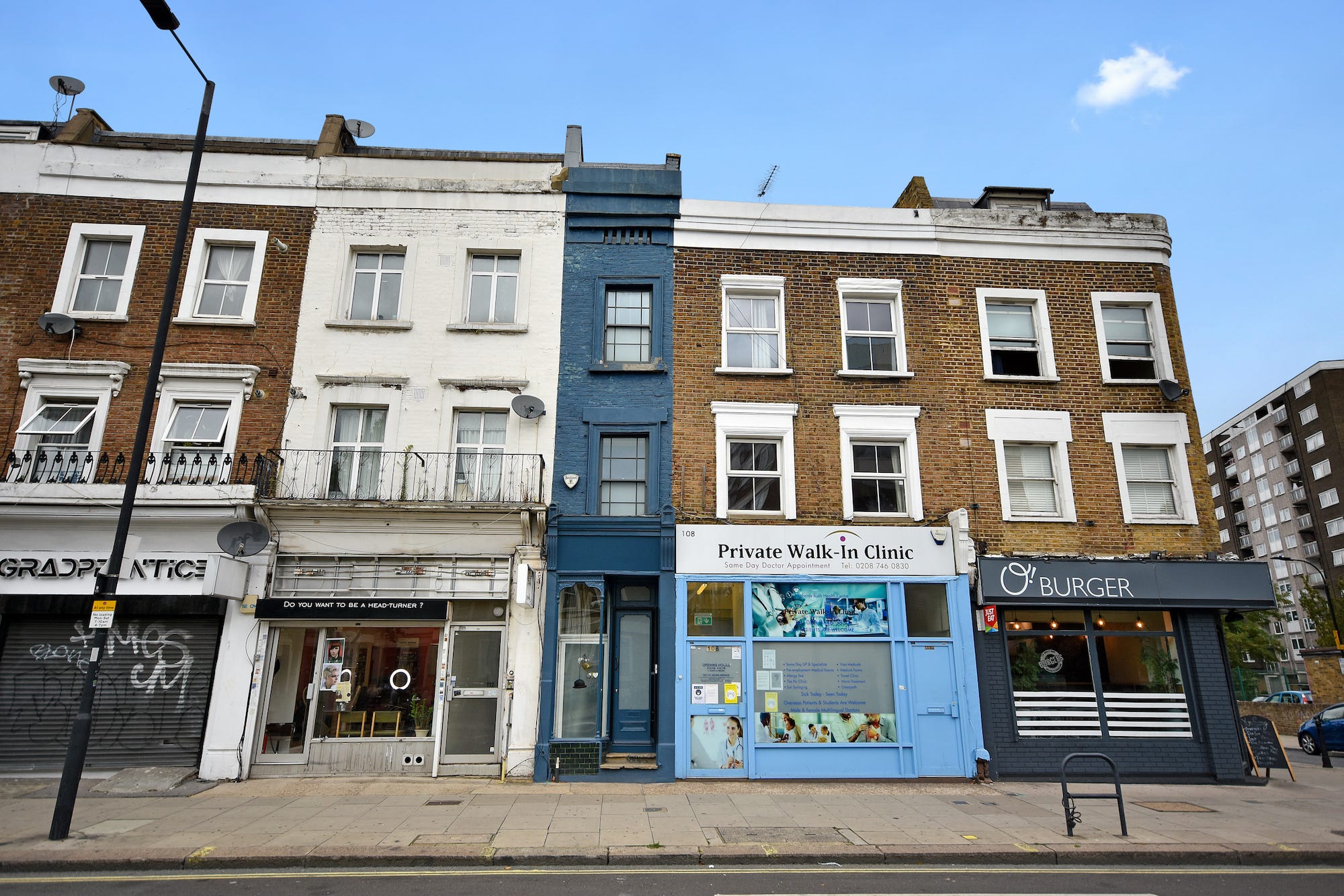 According to a 2017 blog post by New Shepherd’s Bush Blog, the window display used to change often. These have included a Halloween display and another featuring an Oxford Street sign along with a doll that resembles Vogue Editor-in-Chief Anna Wintour.

The property is split over five floors, allowing for ample space by “layering” different rooms of the house. 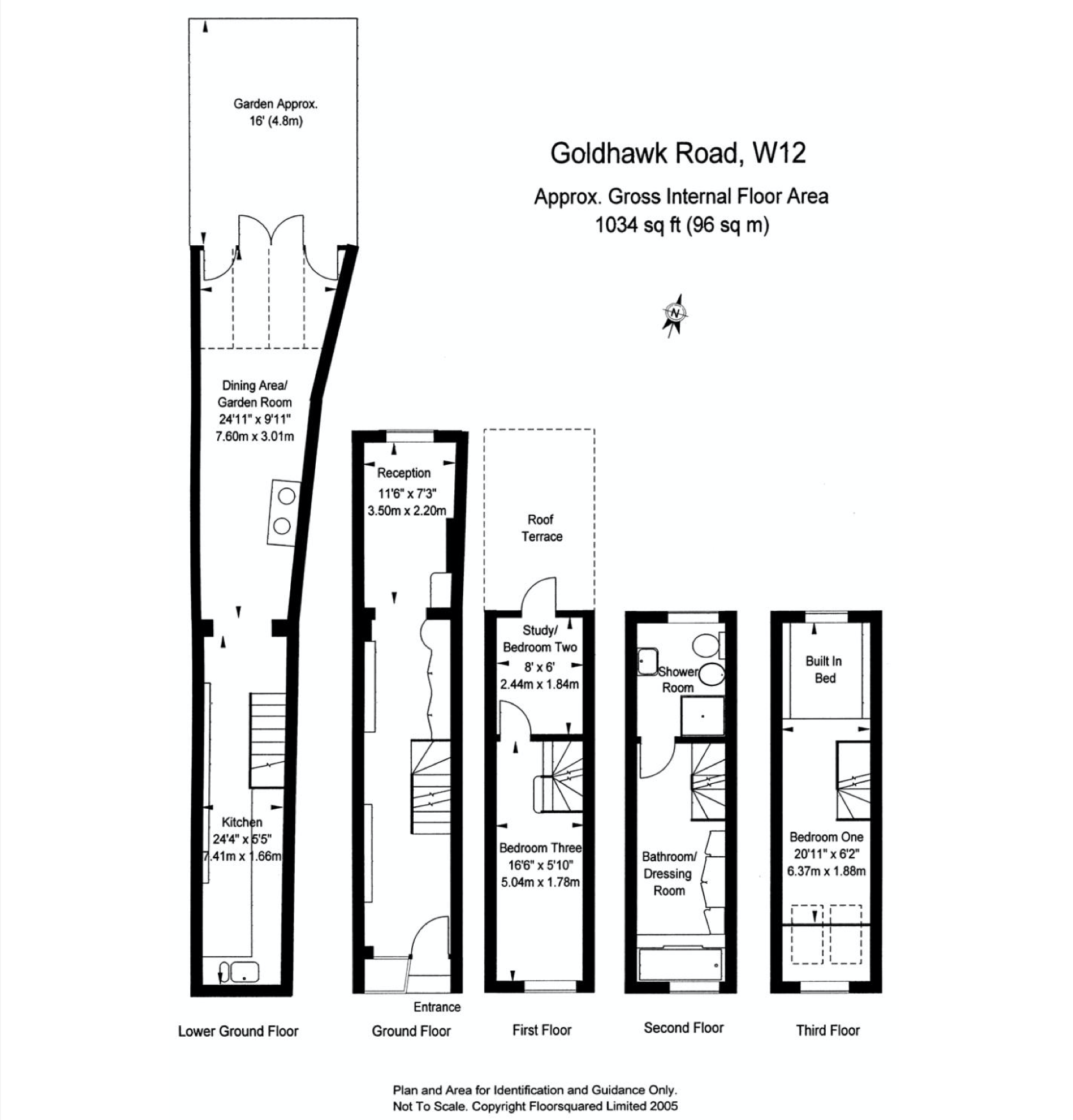 The entrance hallway has cabinets and shelves on one side, using white walls and mirrors to create more space. 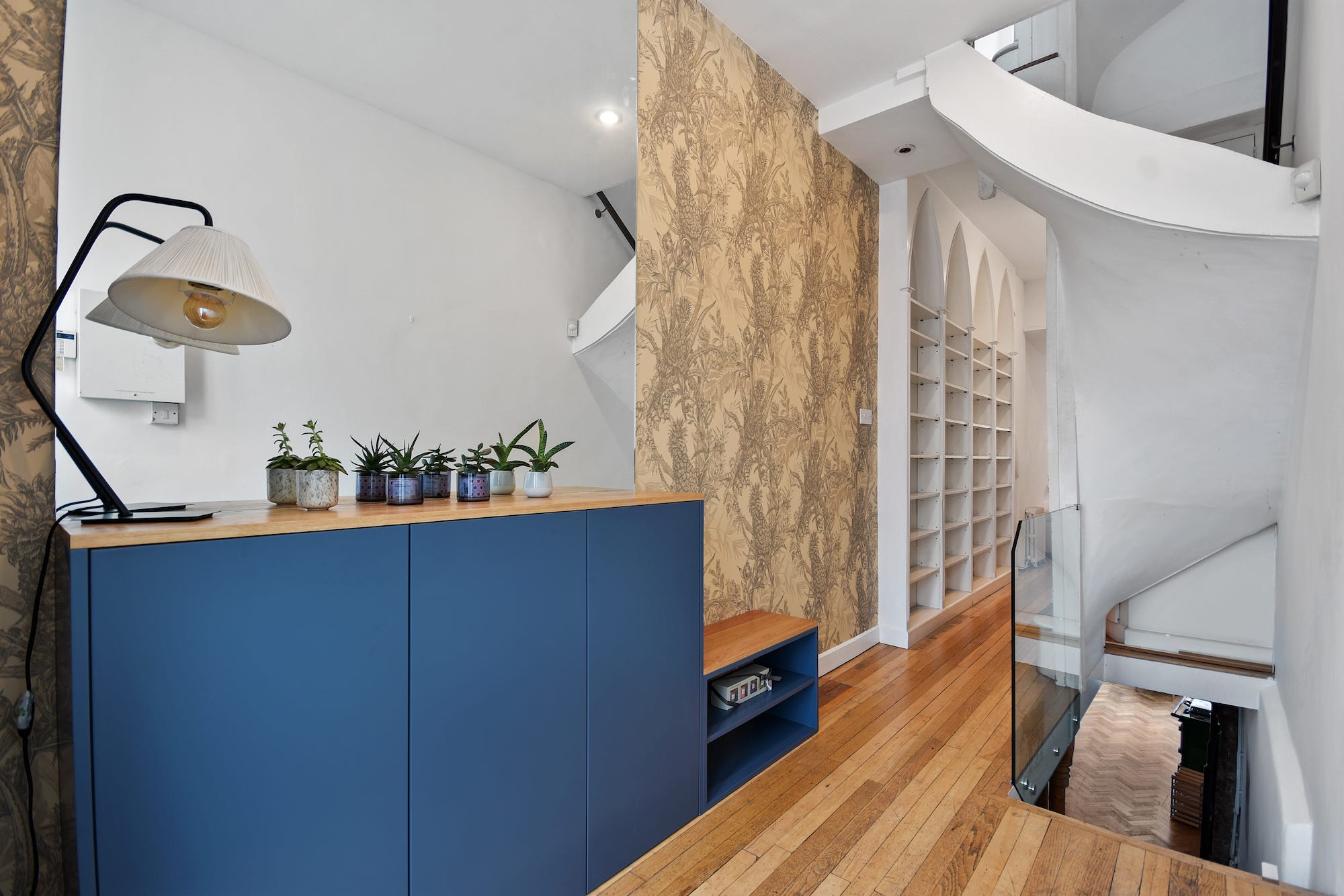 Winkworth Shepherd’s BushThe property has lots of light with windows on both ends of each floor.

David Myers of Winkworth Shepherd’s Bush, who is handling the sale, told Insider that the house would be suited towards “creative types such as media people, designers, and photographers” and “is not designed to be a family home.”

Just beyond the property’s ornate entrance is a reception room that’s a little larger than the front, measuring 7 feet wide. 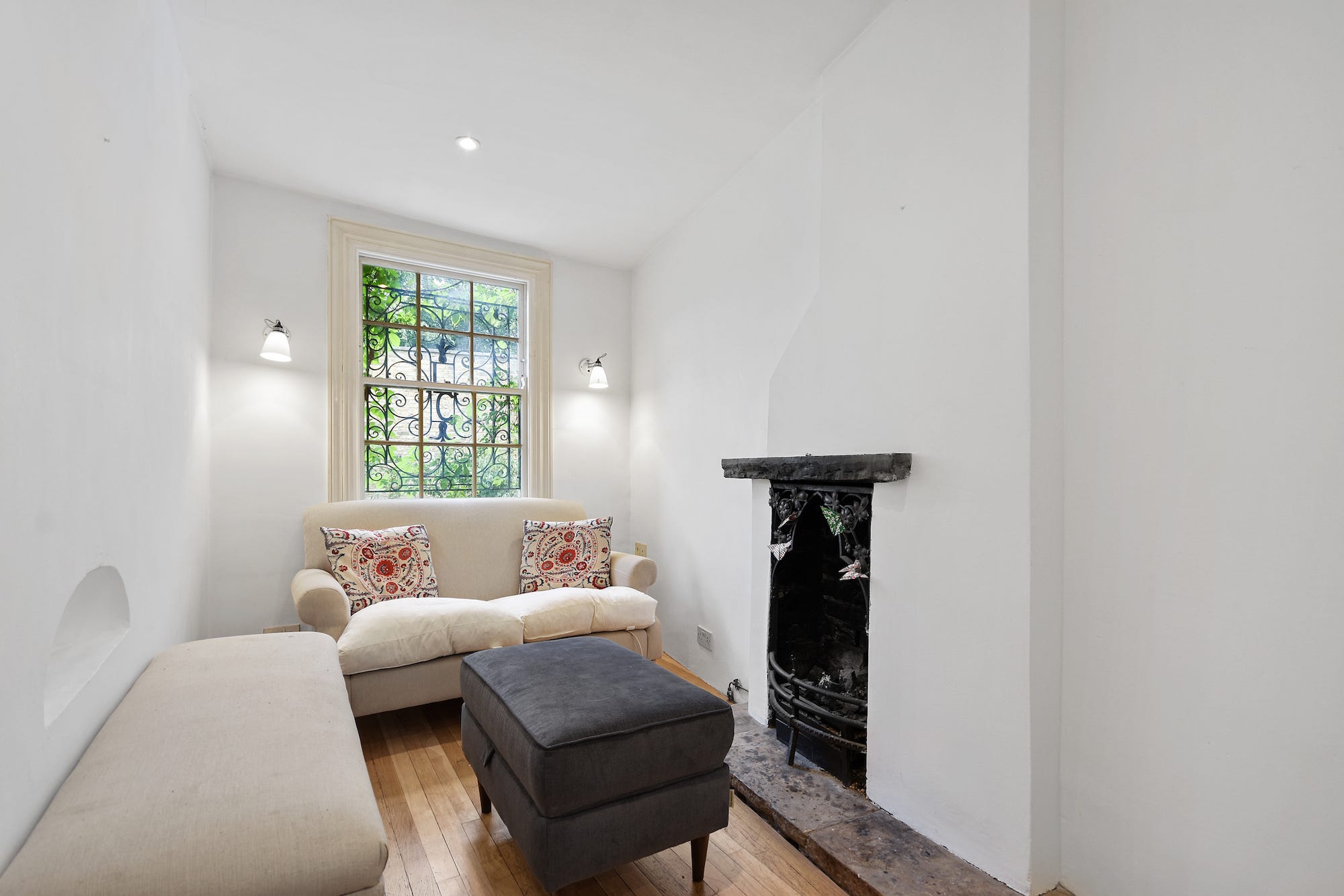 The bathroom also doubles up as a closet, which illustrates how every bit of space is utilised throughout the property. 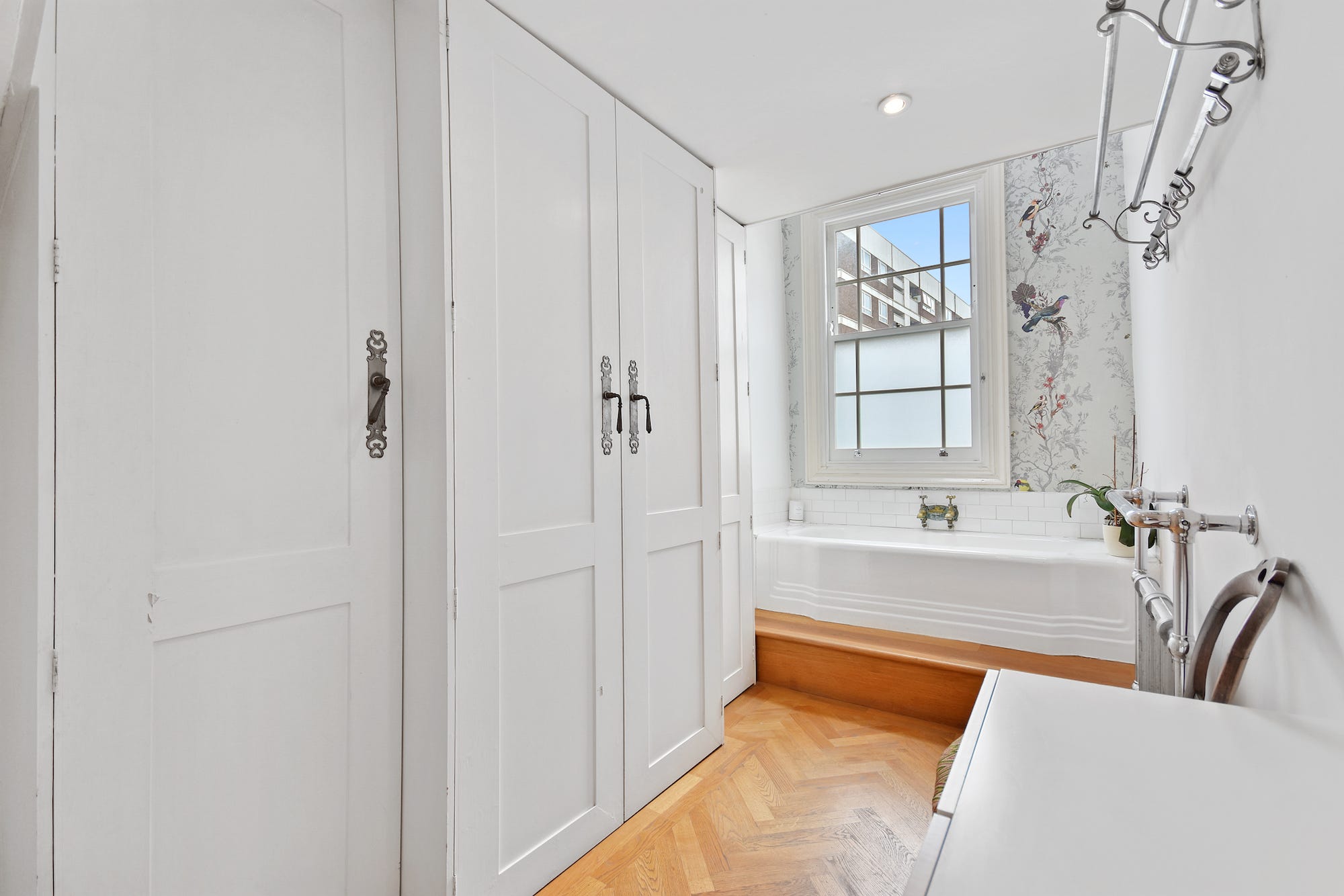 Winkworth Shepherd’s BushThe bathroom can be partly seen from the mezzanine on the floor above.

The kitchen is found on the basement level, and uses light colours and mirrors to create an airy, spacious feeling. 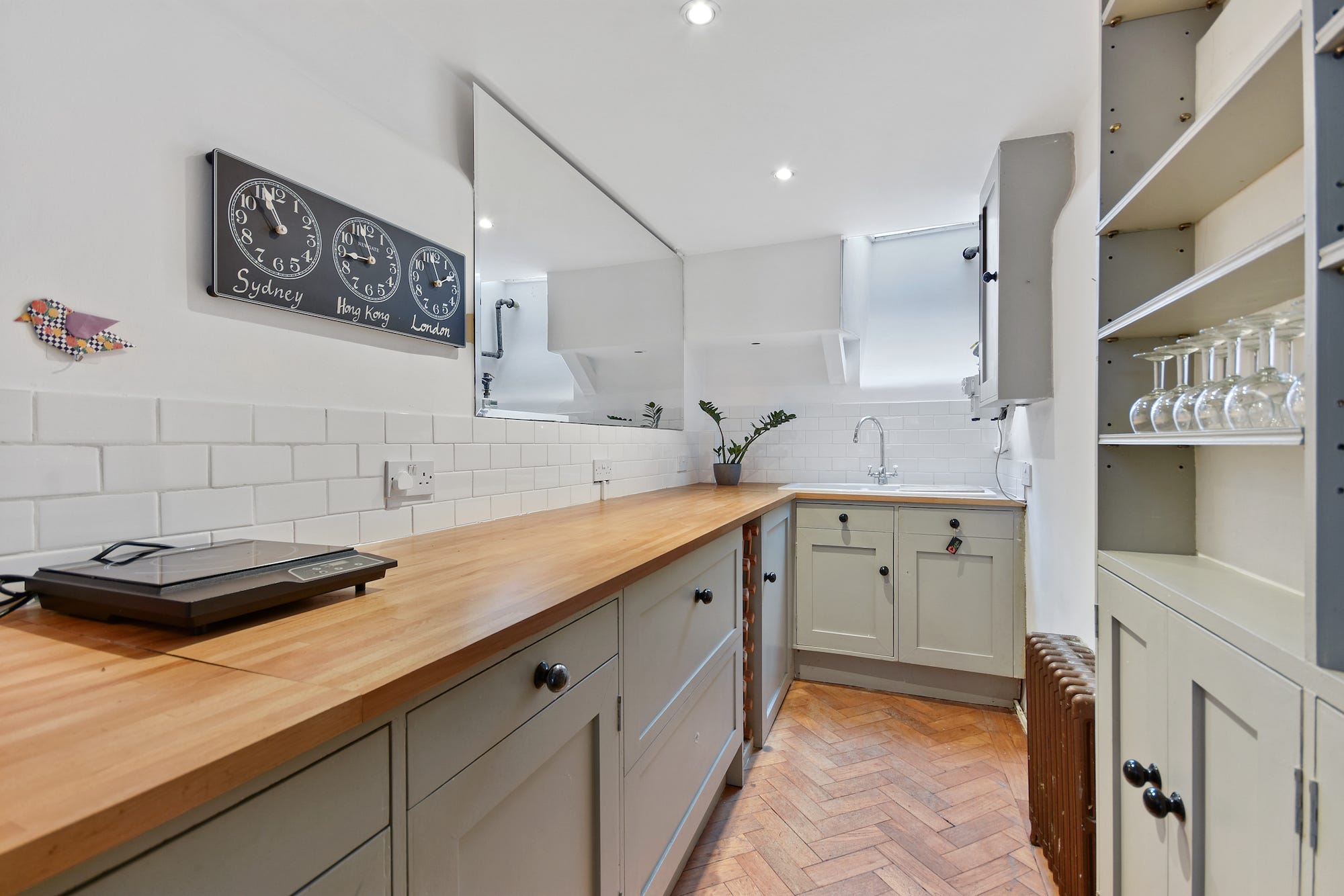 Winkworth Shepherd’s BushThe kitchen is located on the lower ground floor of the property.

The kitchen is also equipped with an AGA cast iron cooker. 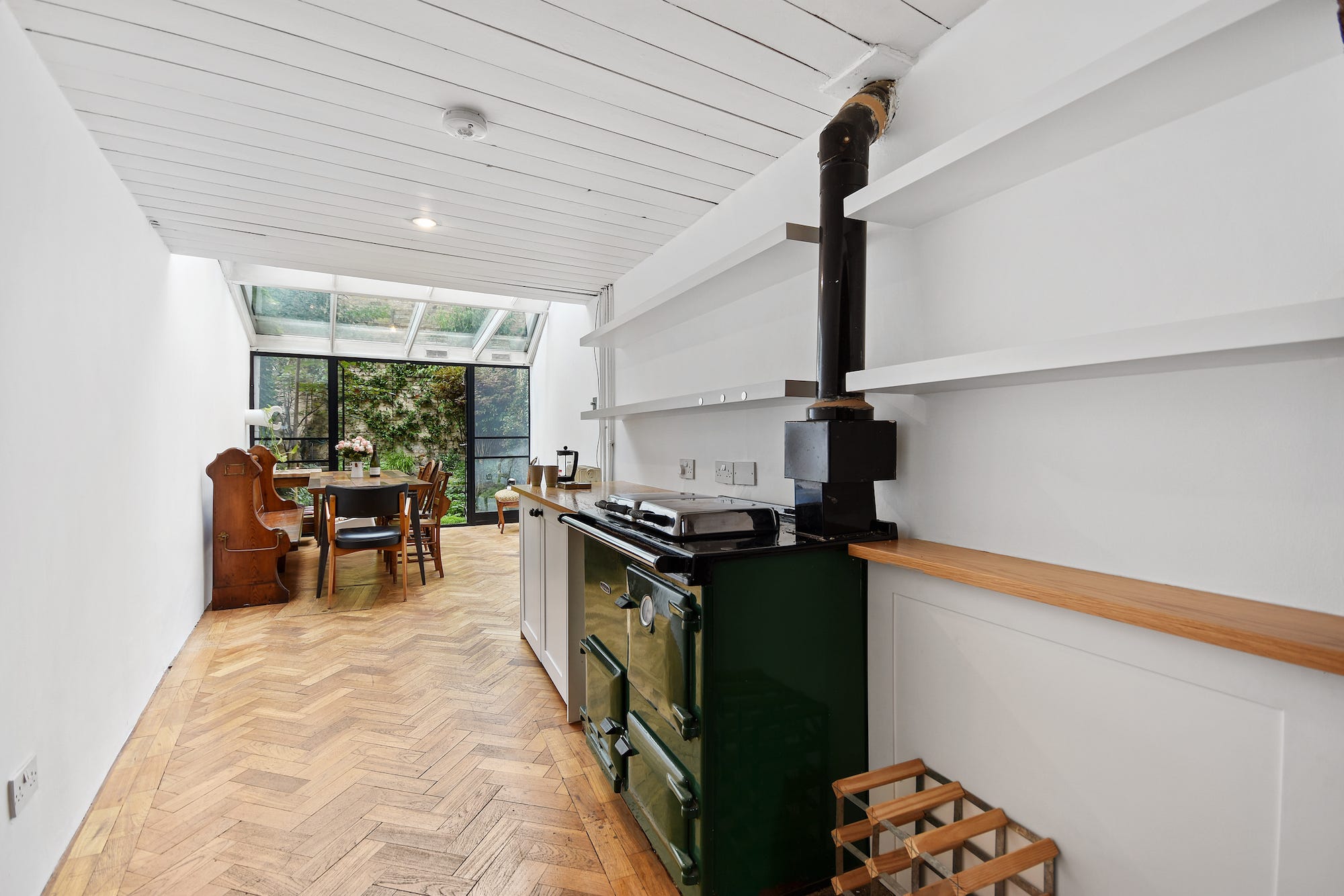 Winkworth Shepherd’s BushThe kitchen and dining area would be an ideal space to host dinner parties.

The dining room leading to the property’s landscaped garden also includes a church pew, which speaks to the home’s uniqueness. 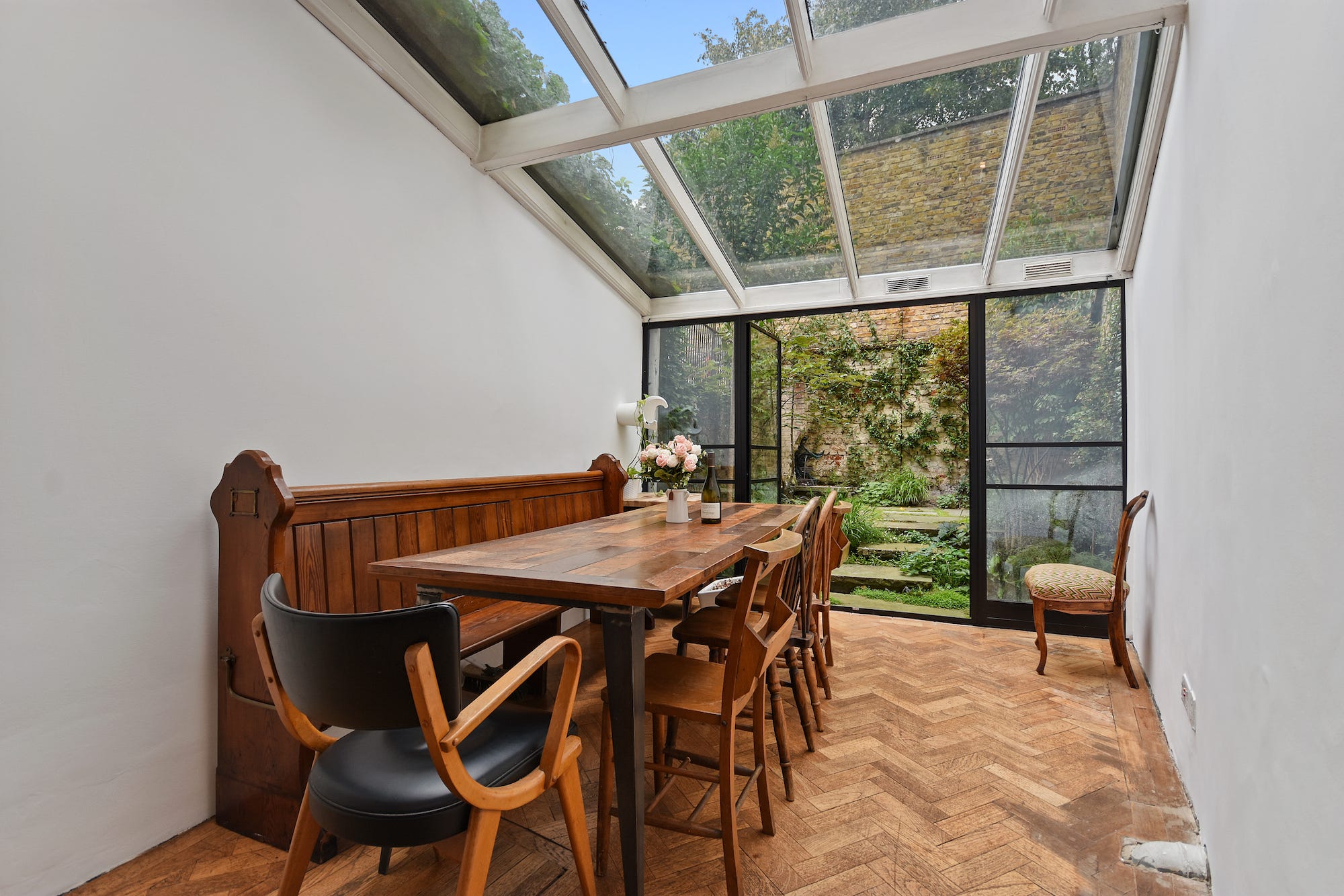 The house features windows on both ends of the property on each floor, helping to create the illusion of a bigger space by letting in as much light as possible. The dining area also happens to be the home’s widest point at 9 feet 11 inches.

There’s even enough space for a garden, which has been fully landscaped. 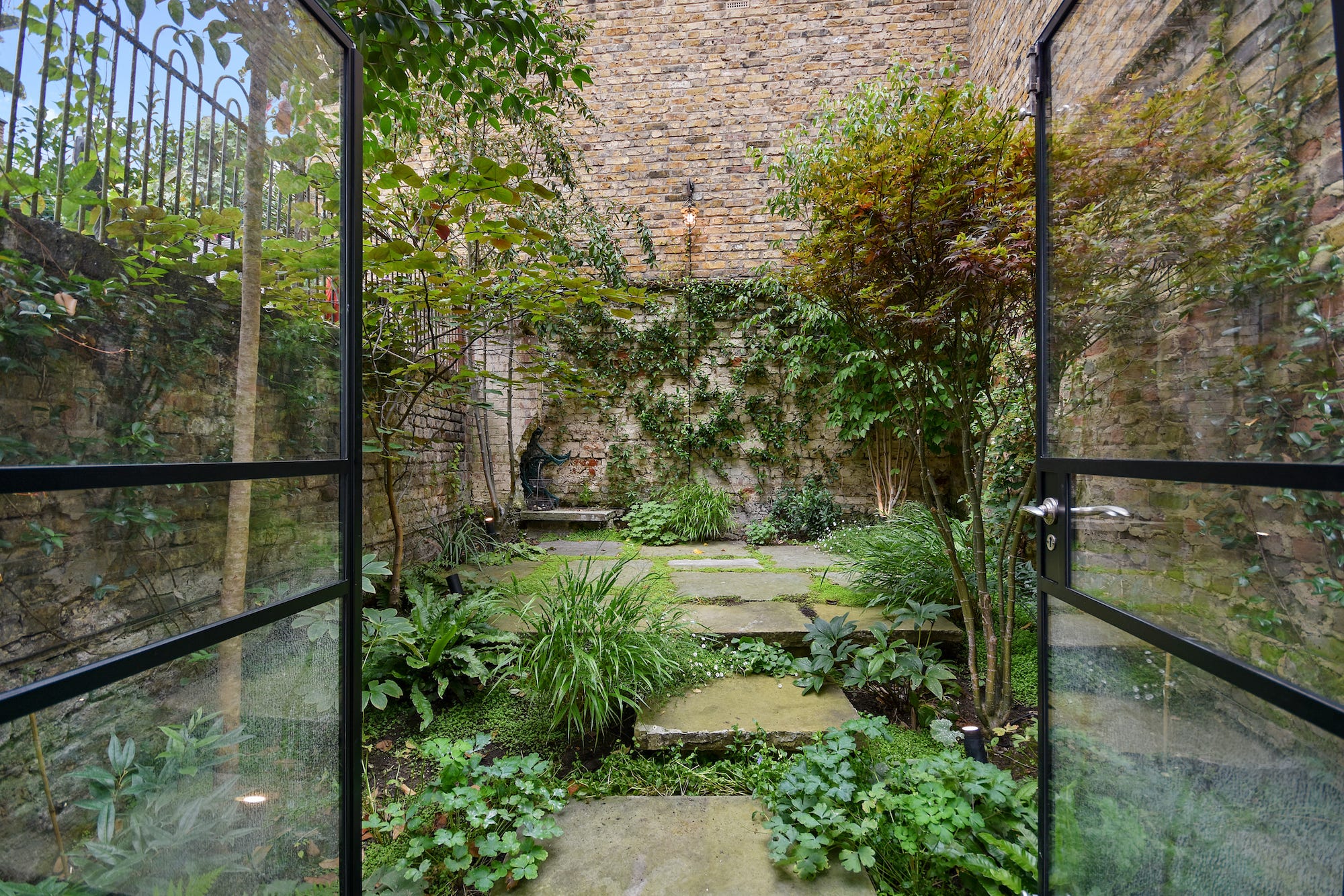 Winkworth Shepherd’s BushThe garden is wider than the house, measuring approximately 16 feet across.

The roof terrace is located on the property’s second floor, which has a bedroom space and a study that can be easily converted into another bedroom. 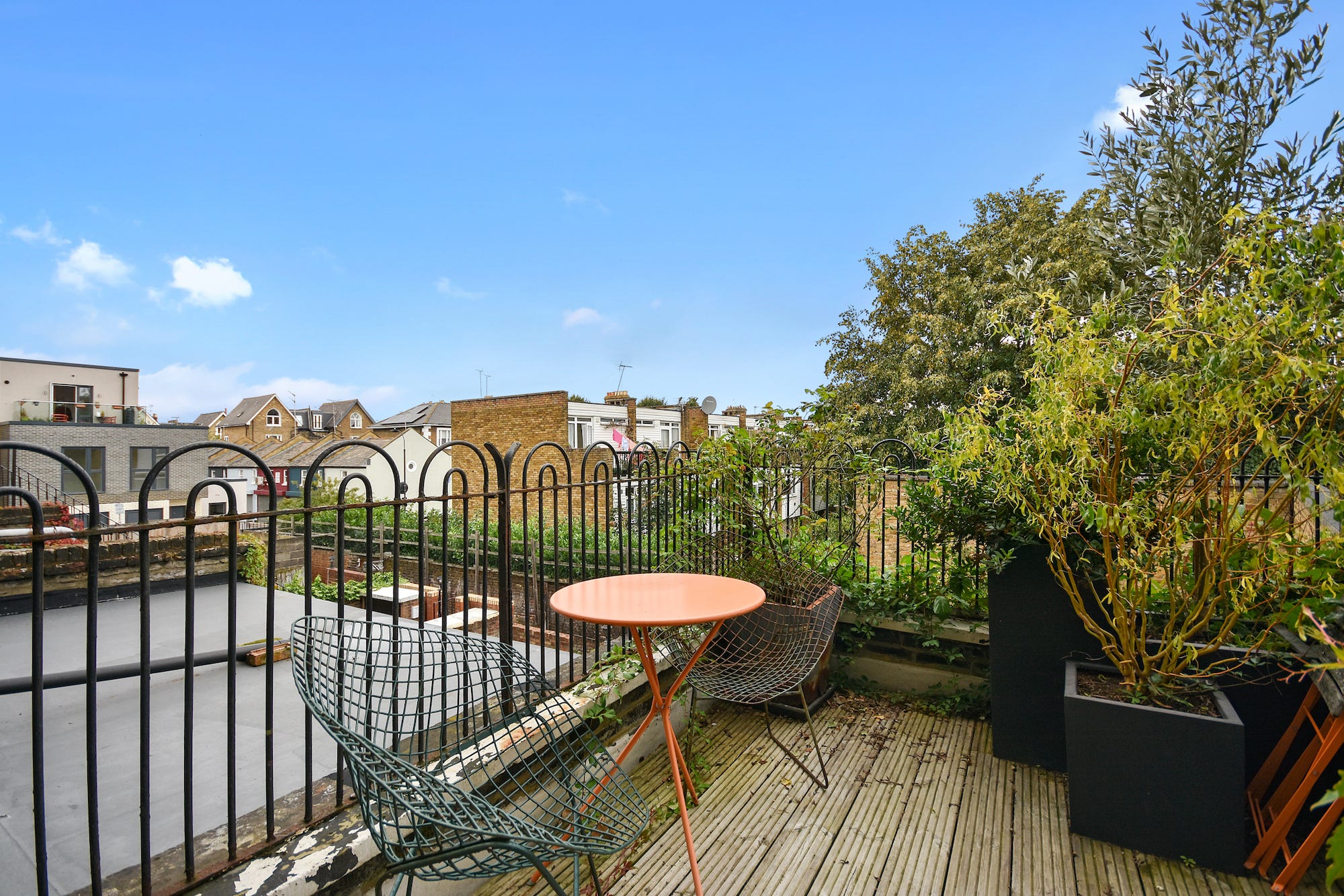 Winkworth Shepherd’s BushGreat for a romantic evening, or a reading session underneath the night sky.

The main bedroom is located on the top floor and includes a built-in bed. 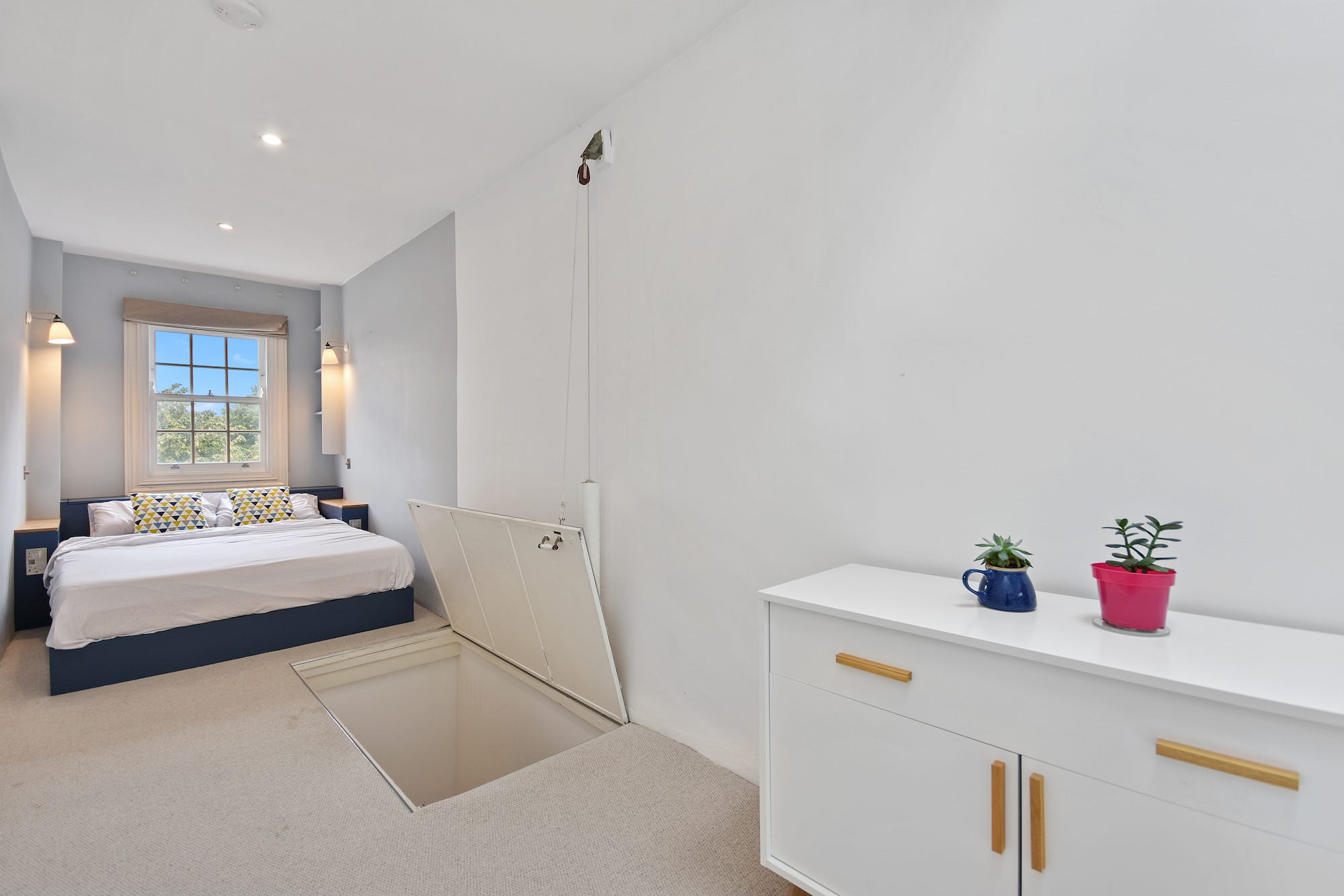 Winkworth Shepherd’s BushThe bedroom makes use of its space by moving closets to the floor below.

A mezzanine on the top floor overlooks the bathroom and feature wall. 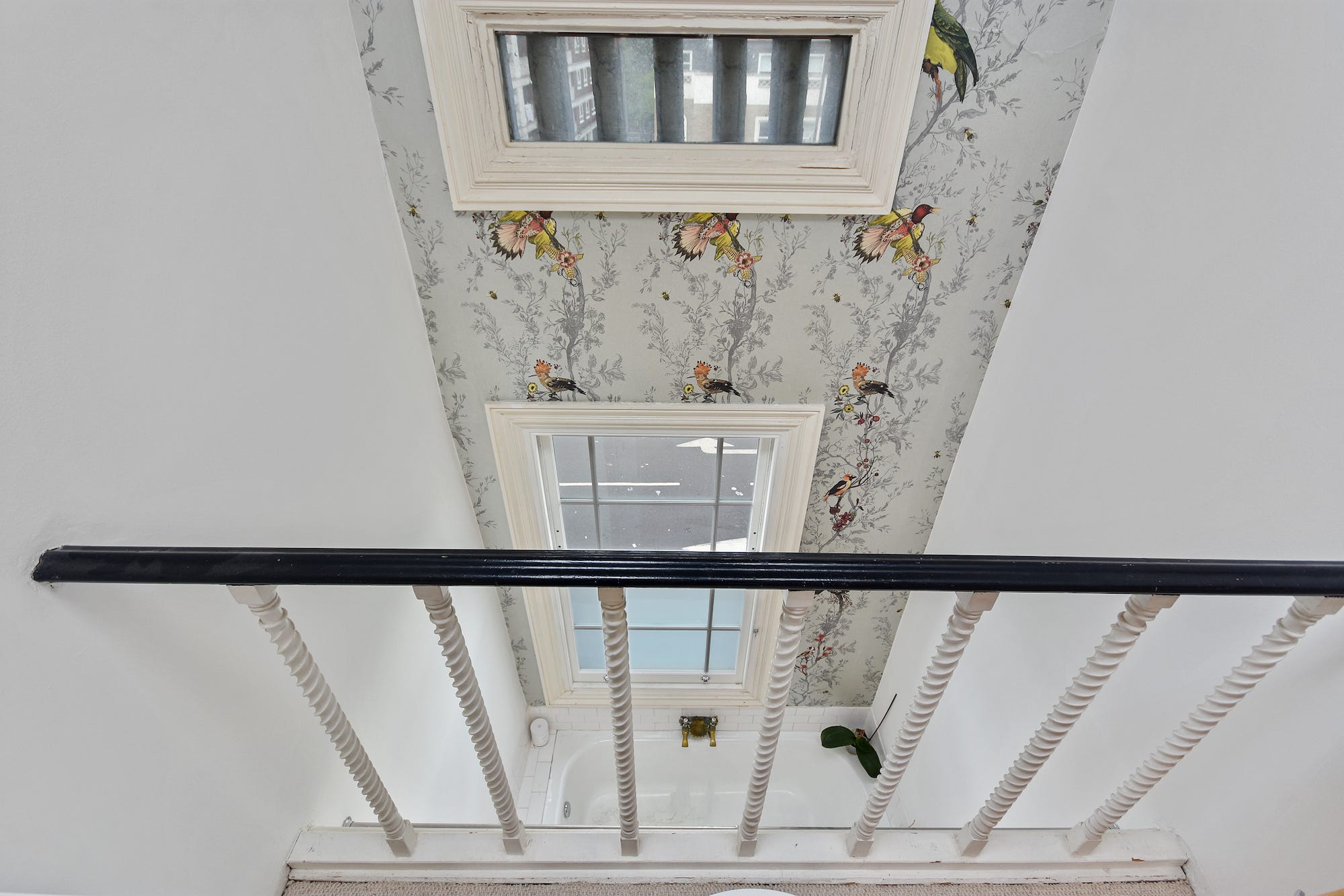 Another view of the home’s reception room shows the entrance and well-lit hallway, which is surprisingly spacious. 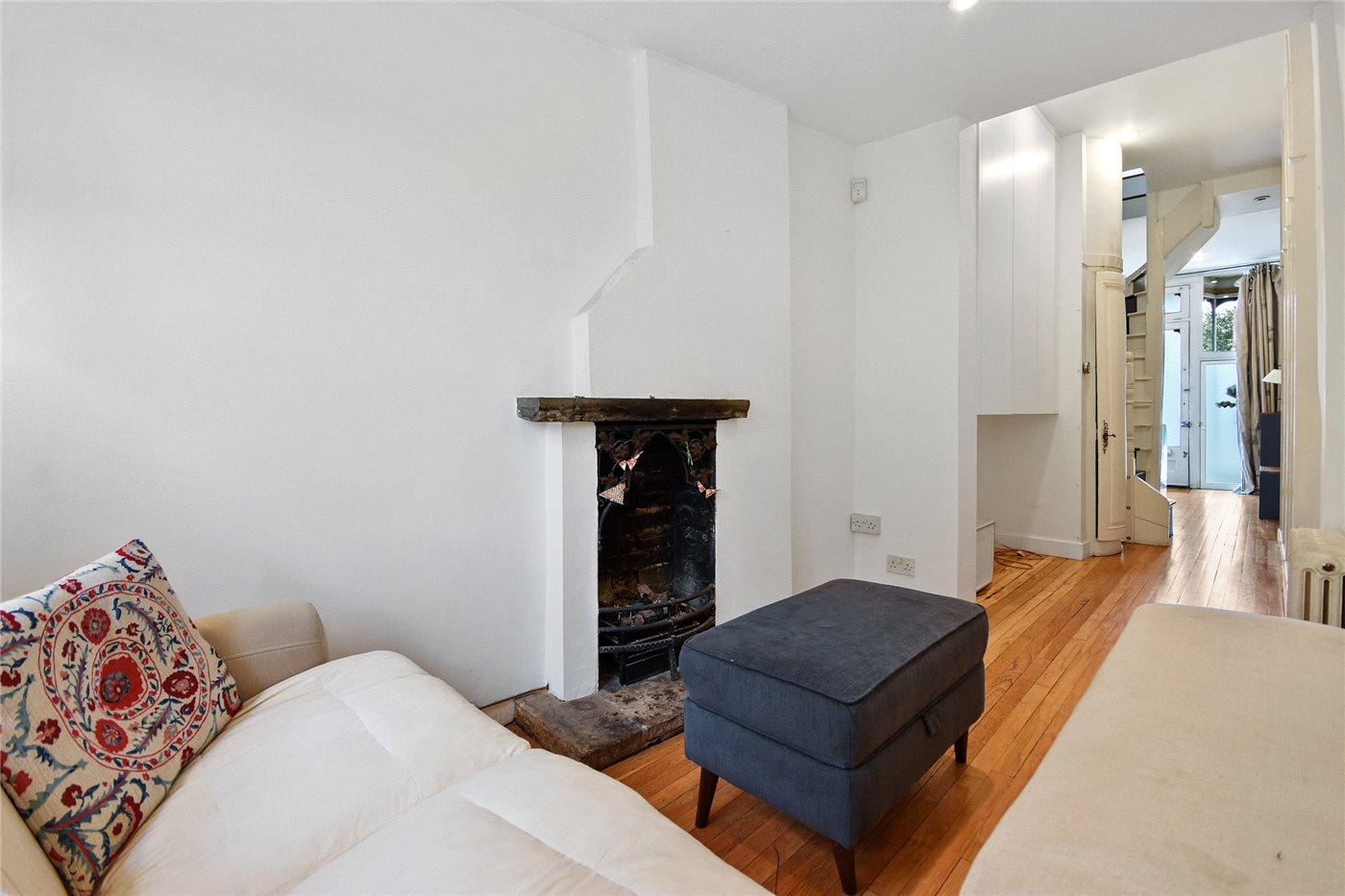 Winkworth Shepherd’s BushThe reception is also very homely, making it hard to imagine that it was once a hat store.

Myers told Insider that the property was built as part of a terrace of houses in the Victorian era.

“I think people are drawn to them simply because of their unique charm, character, and originality. After all, how many of us can say we live in something so eccentric instead of the more conventional home we all seem to gravitate to?” Myers said.

More information about the listing can be found here.