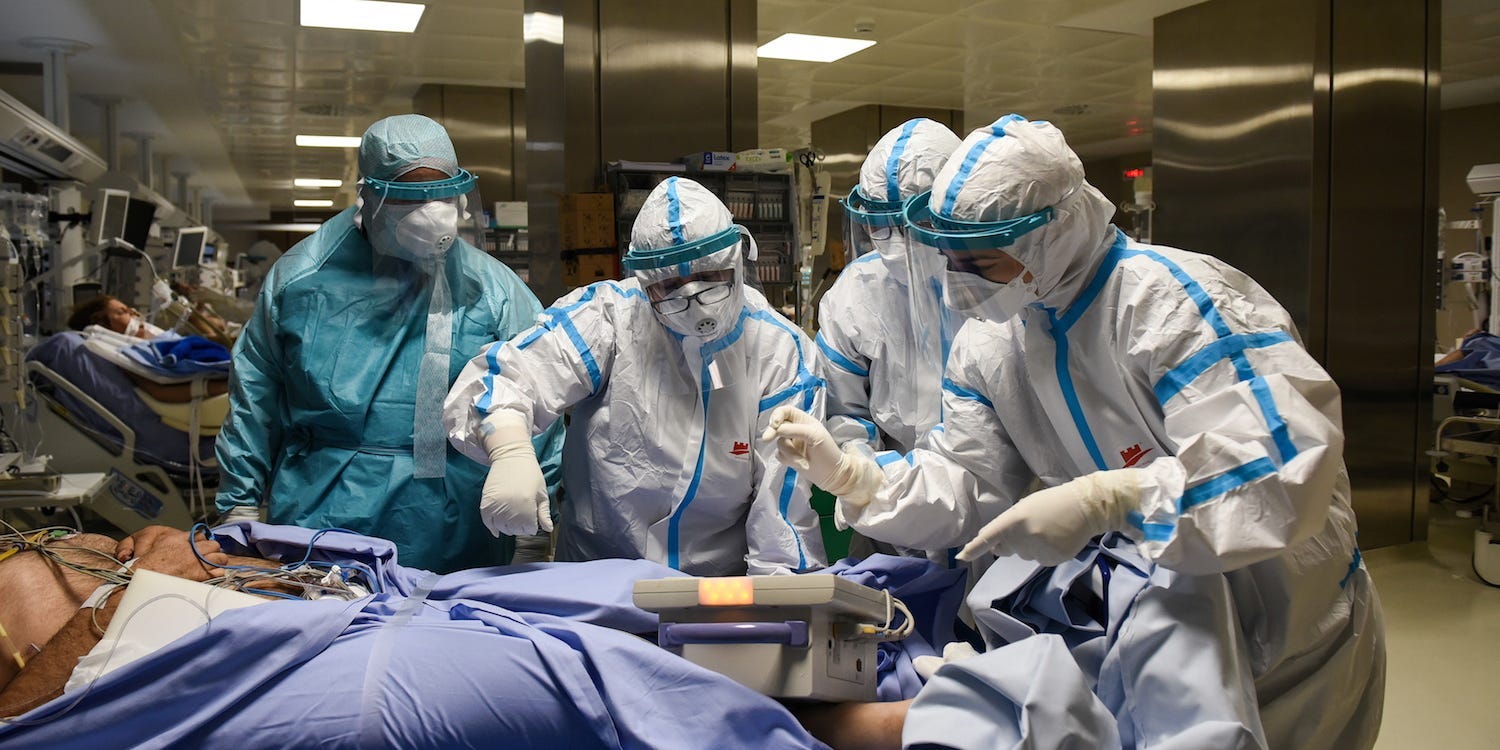 Alexandros Avramidis/ReutersMedical workers take care of a patient at the ICU of the George Papanikolaou General Hospital in Thessaloniki, Greece, on November 11, 2020.

Europe’s second coronavirus wave is intensifying as the number of hospitalizations and deaths are dramatically rising across the continent. 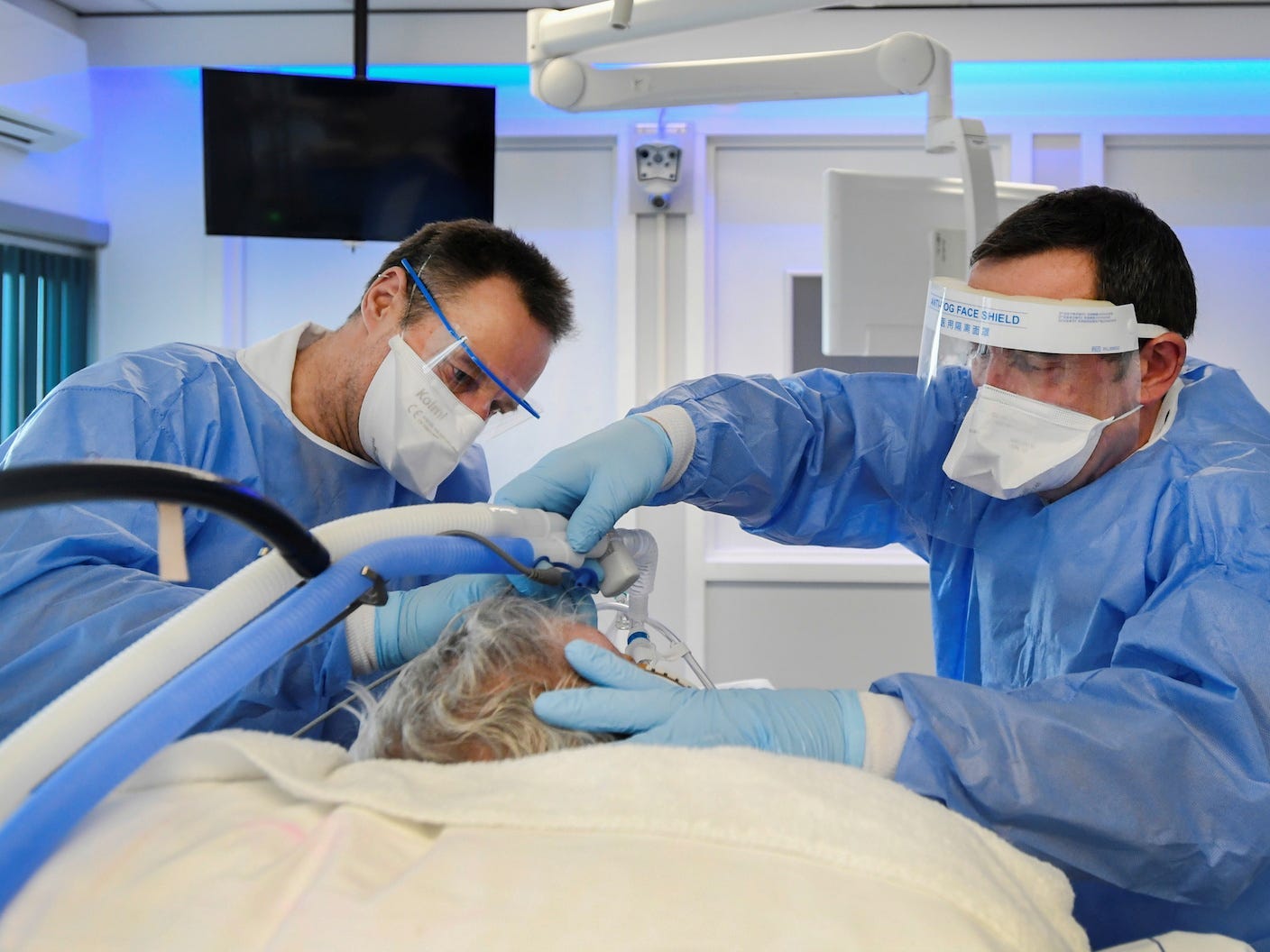 Piroschka van de Wouw/ReutersMedical personnel wearing full protective suits are seen as they treat a patient infected with the coronavirus in the ICU at Maastricht UMC+ in Maastricht, Netherlands, on November 10, 2020.

On Thursday, the UK because the first country in Europe to pass 50,000 COVID-19 deaths, according to latest government figures. 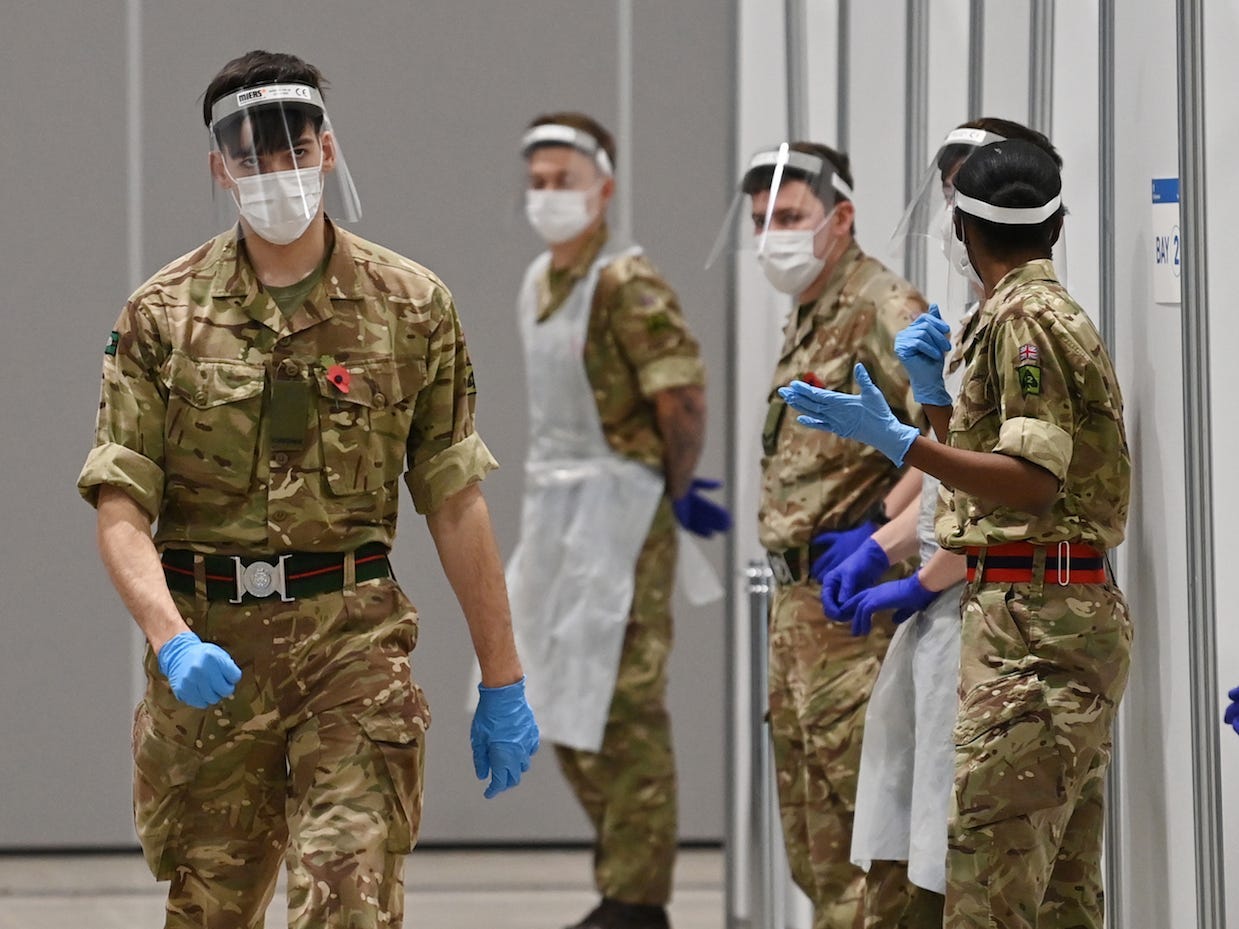 NHS bosses said this week they were seriously concerned by the number of hospitalizations, adding that medical professionals are facing a “very difficult winter.” 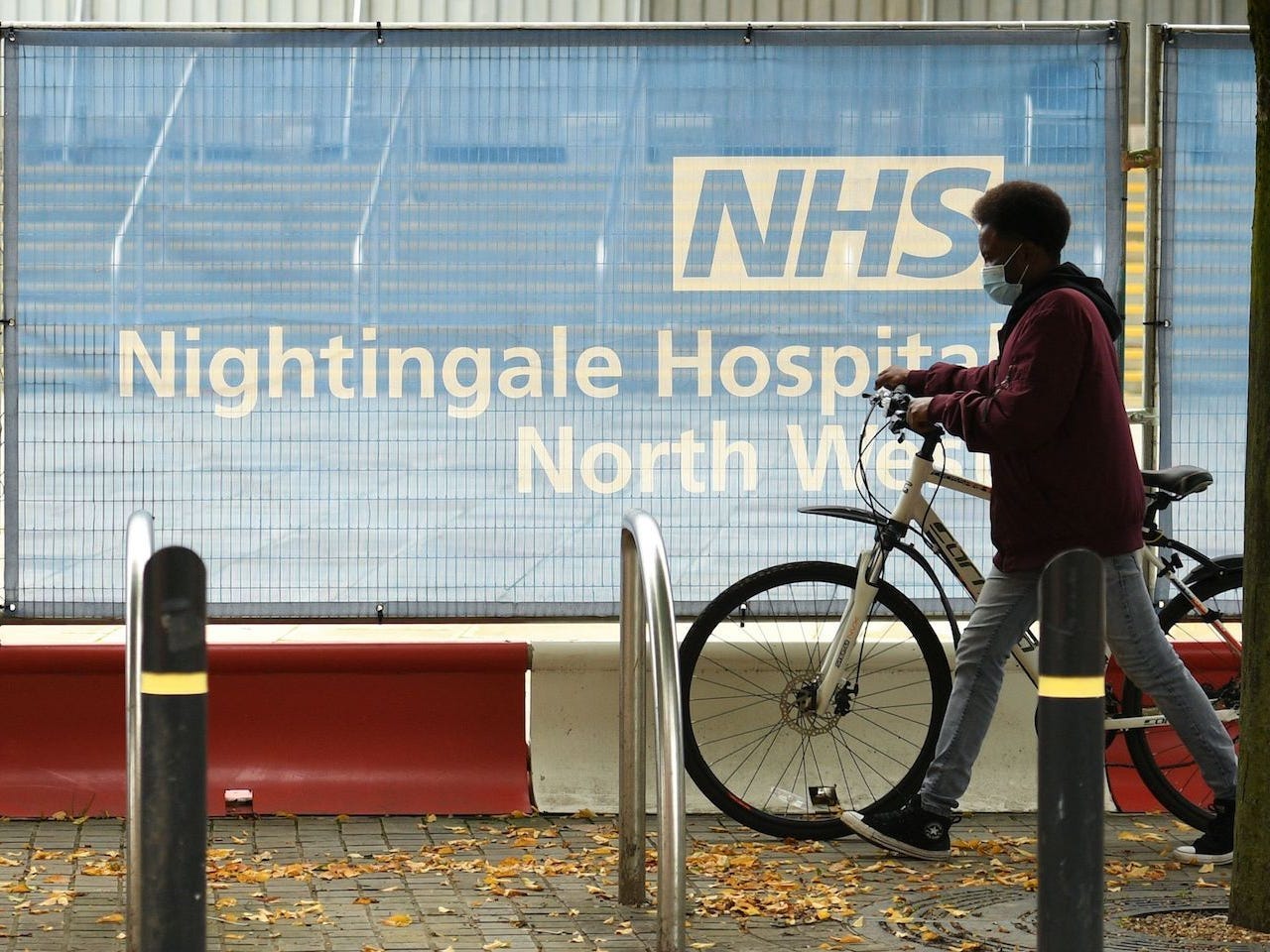 Oli Scarff / AFP via Getty ImagessA cyclist wearing a face mask pushes a bike past a barrier outside the NHS Nightingale Hospital North West field hospital, set up to provide more hospital capacity during the pandemic, on October 13, 2020.

Hospitals are currently treating just over 10,000 patients, but are expected to get close to 20,000 in the next few weeks.

In France, hospitalizations are also rising rapidly, with the prime minister saying on Thursday that someone is being admitted to hospital every 30 seconds. 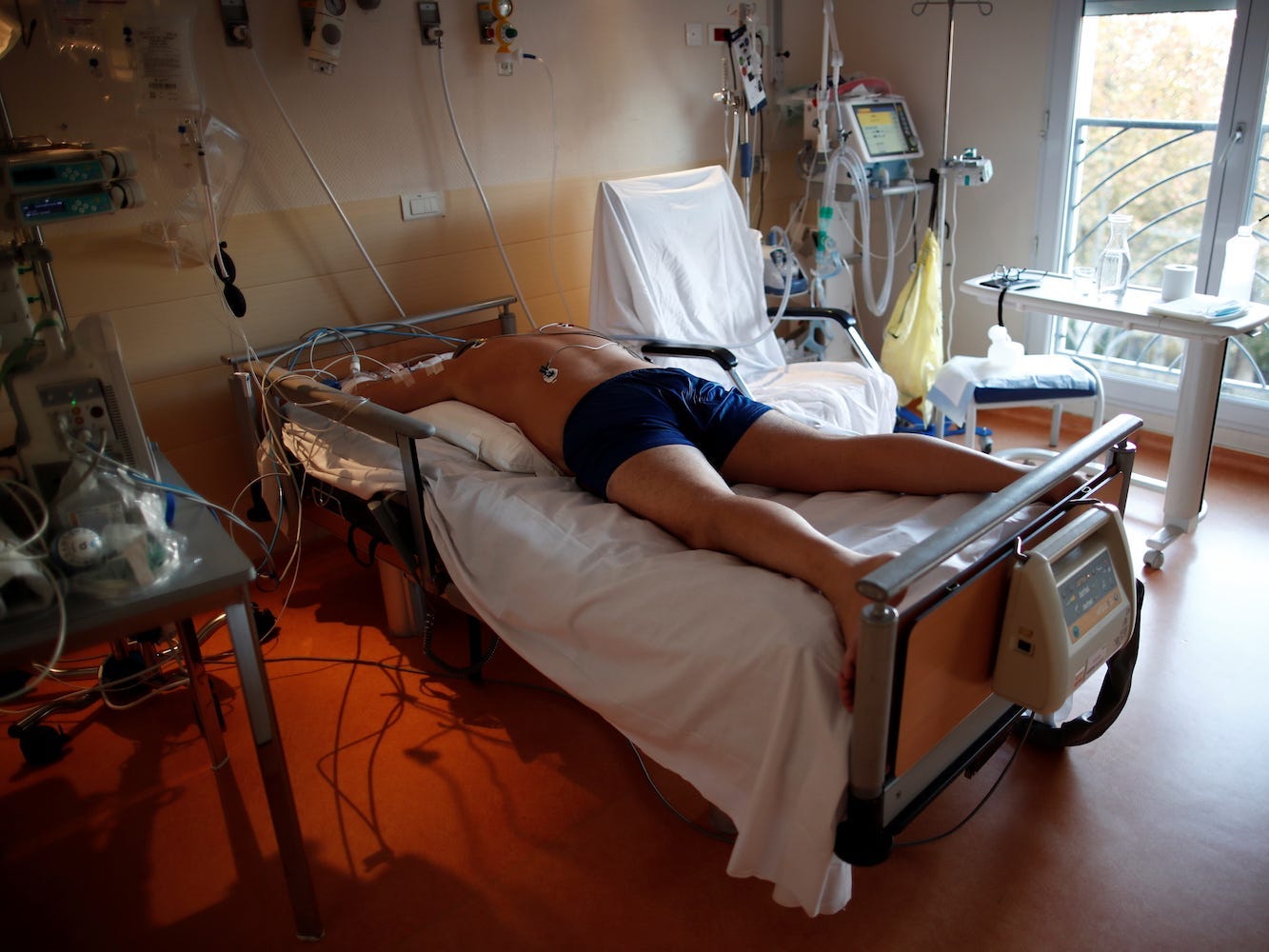 Benoit Tessier/ReutersA patient suffering from the coronavirus lies on his front in the ICU at Ambroise Pare clinic in Neuilly-sur-Seine, near Paris, France, November 12, 2020.

The hospitalizations come despite the country seeing a decrease in its infection rate.

“The pressure on our hospitals has intensified enormously,” Prime Minister Jean Castex said on Thursday, according to Sky News.

The number of people infected with COVID-19 in French hospitals reached a new all-time high on Friday, with 32,638 reported admissions. 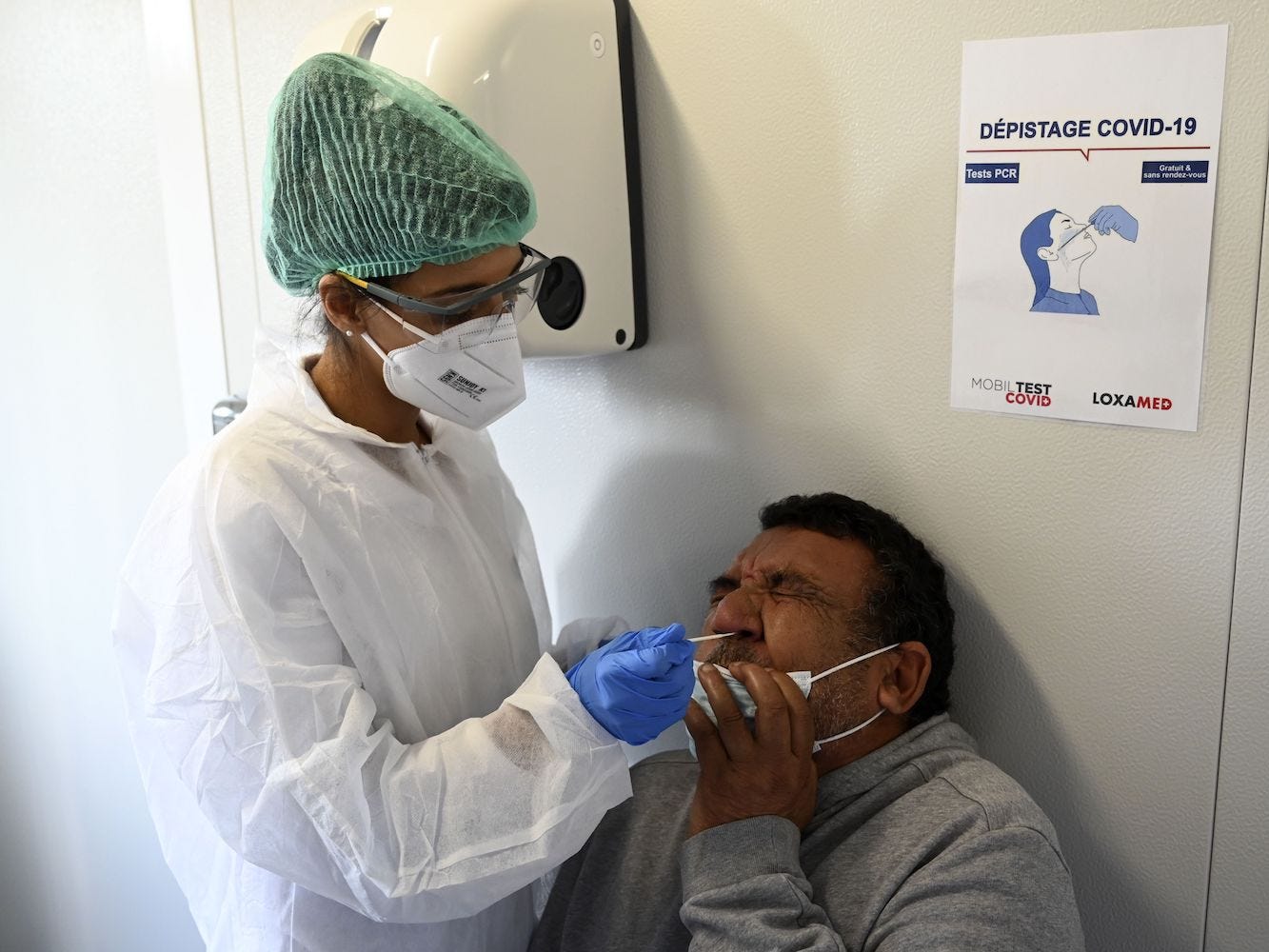 Nicolas Tucat/AFP via Getty ImagesA medical worker swabs the nose of a man as she administers a novel coronavirus Covid-19 test at a mobile testing unit at the main train station in Marseille, southern France, on November 12, 2020.

The spike in cases and hospitalizations comes even though the country has been on one of the strictest second lockdowns in Europe. 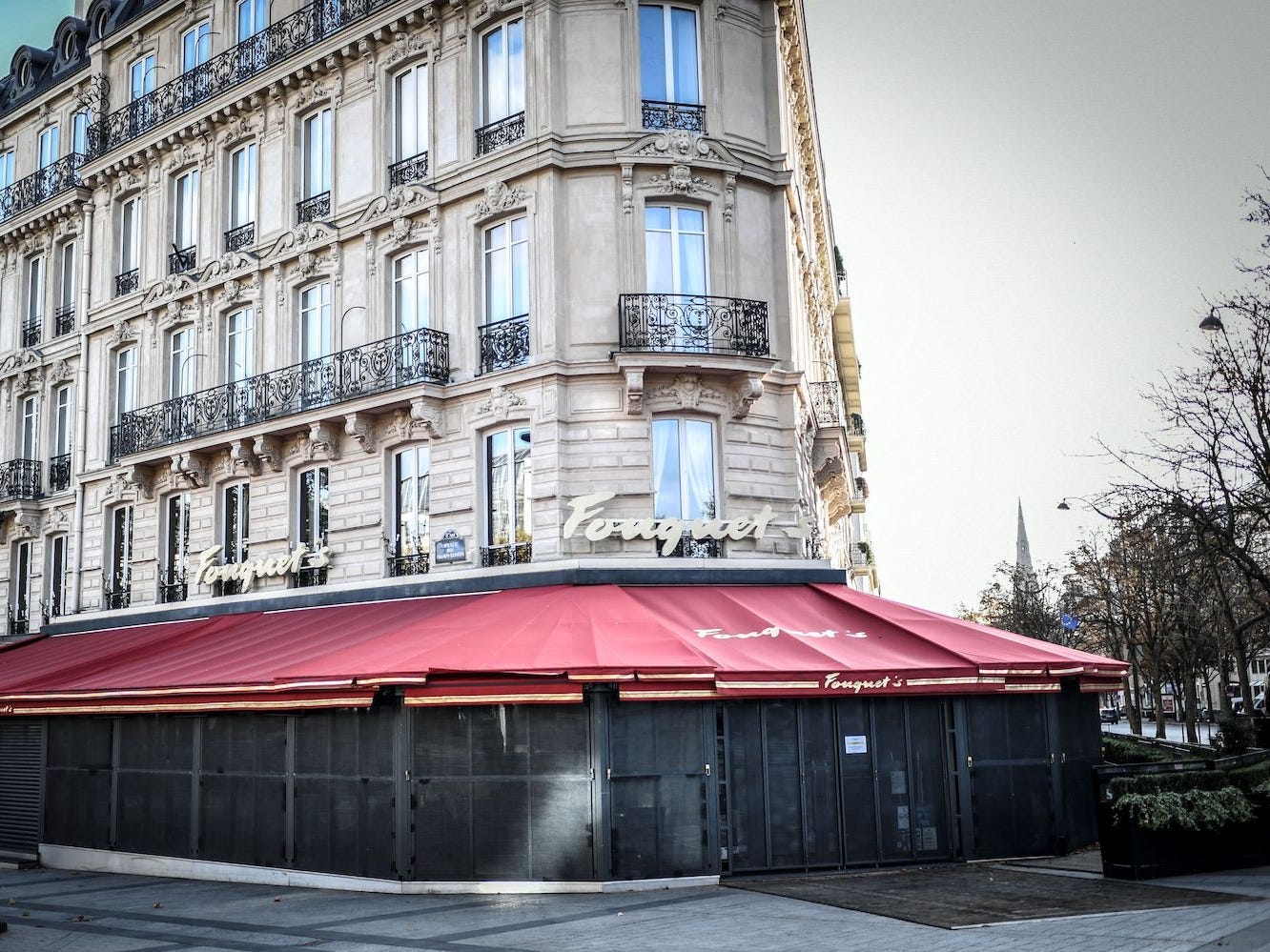 Stephane De Sakutin/AFP via Getty ImagesA restaurant on the Champs-Elysees avenue is shut down during a second national lockdown in Paris, France, on November 12, 2020.

People living in France are only allowed to leave home for essential work or medical reasons. If they leave for any other reason, they must have a permission form with them.

Even in Germany — a country that was praised for handling the first COVID-19 wave efficiently — doctors are struggling to keep up with a rising number of cases. 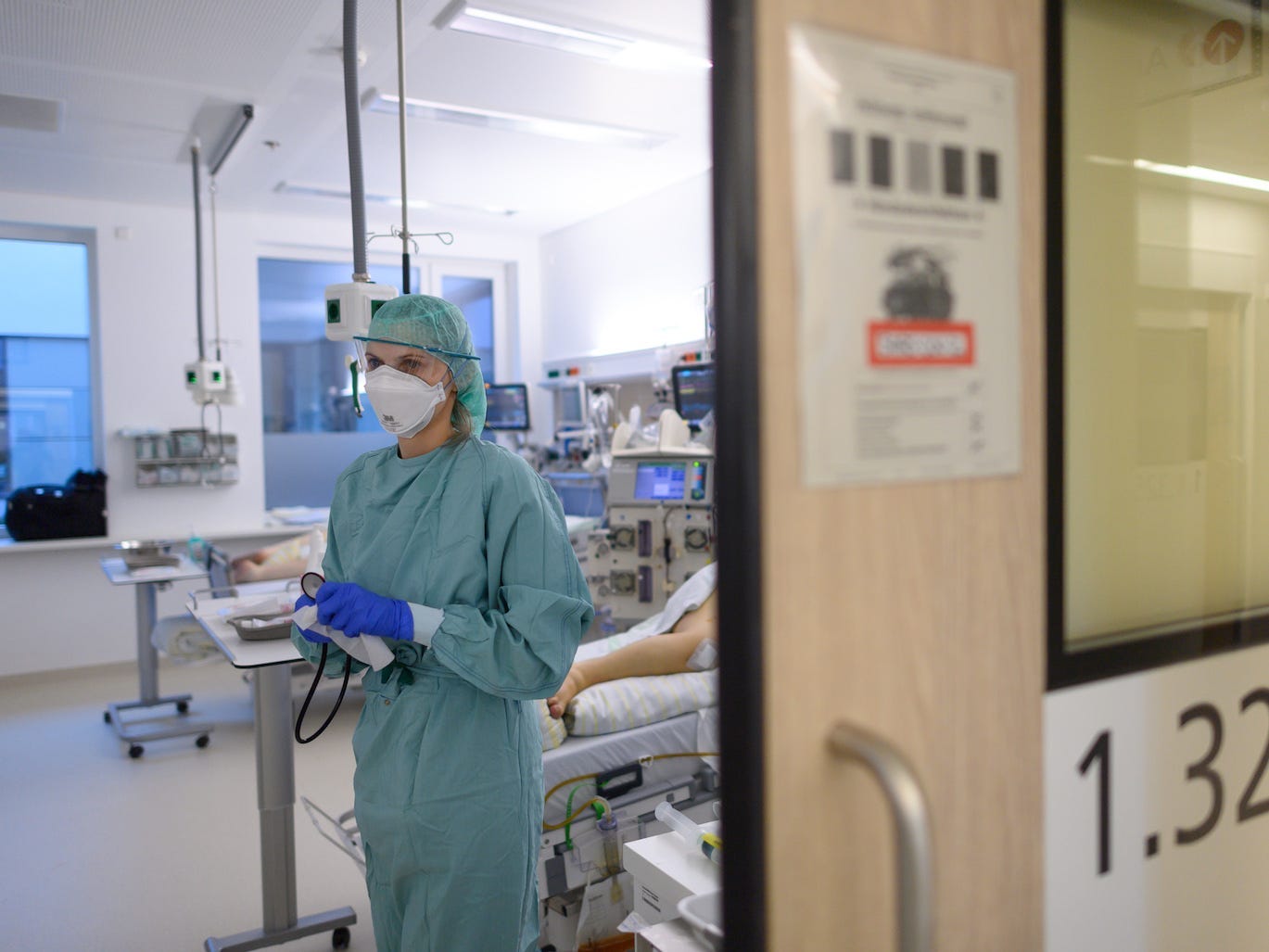 According to the Robert Koch Institute, COVID-19 cases in the country hit a record of 23,542 on Friday.

The figures are particularly dire in Berlin, which has one of Germany’s highest infection rates. 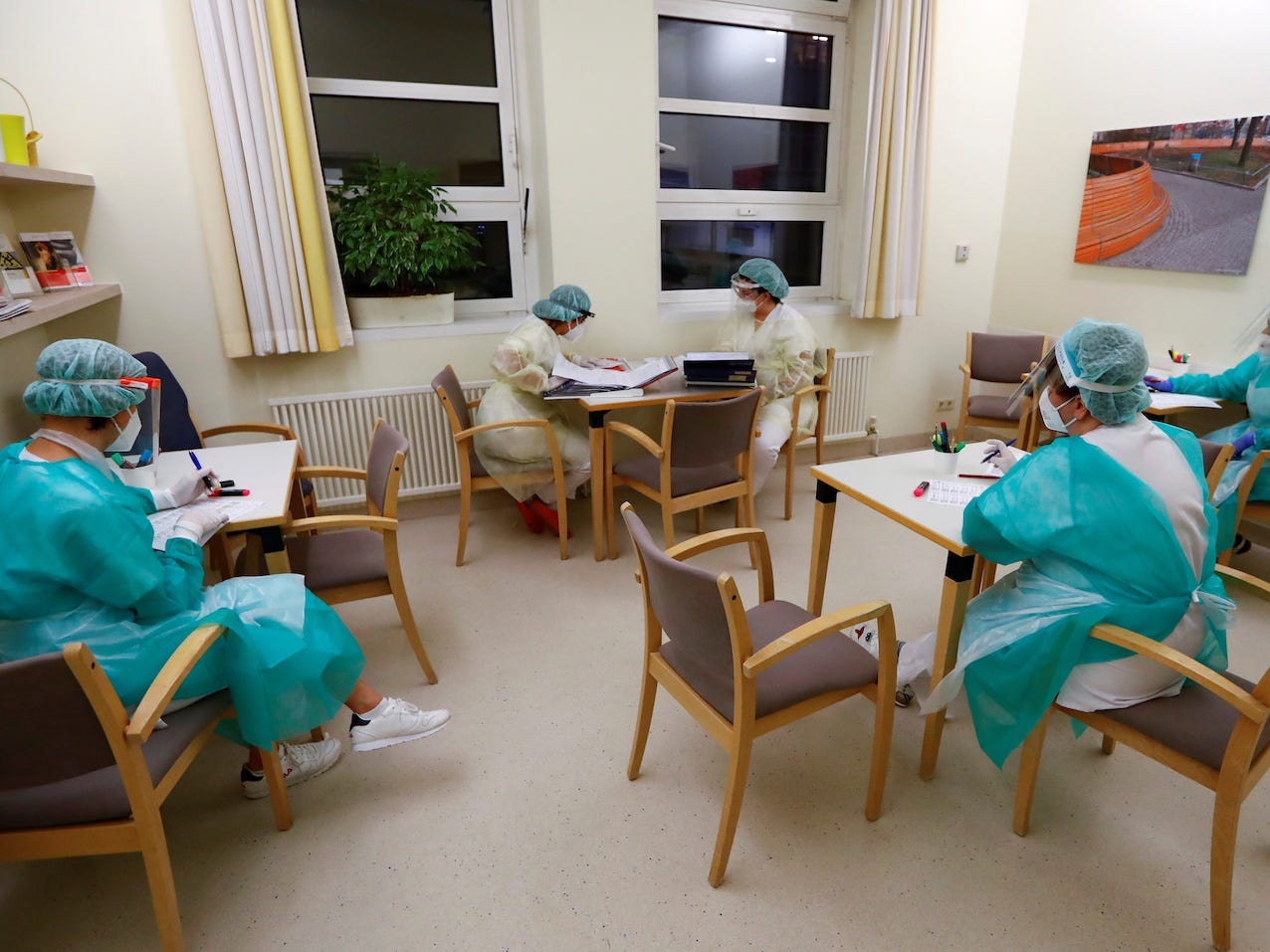 Fabrizio Bensch/ReutersNurses have their daily shift handover briefing on the medical treatment for patients suffering from the coronavirus at the COVID-19 isolation ward of DRK Kliniken Berlin Mitte hospital in Berlin, Germany, on November 11, 2020.

But the country is still doing relatively well compared to others. At the beginning of the month, Germany’s health minister said it would open its hospitals to neighbouring countries. 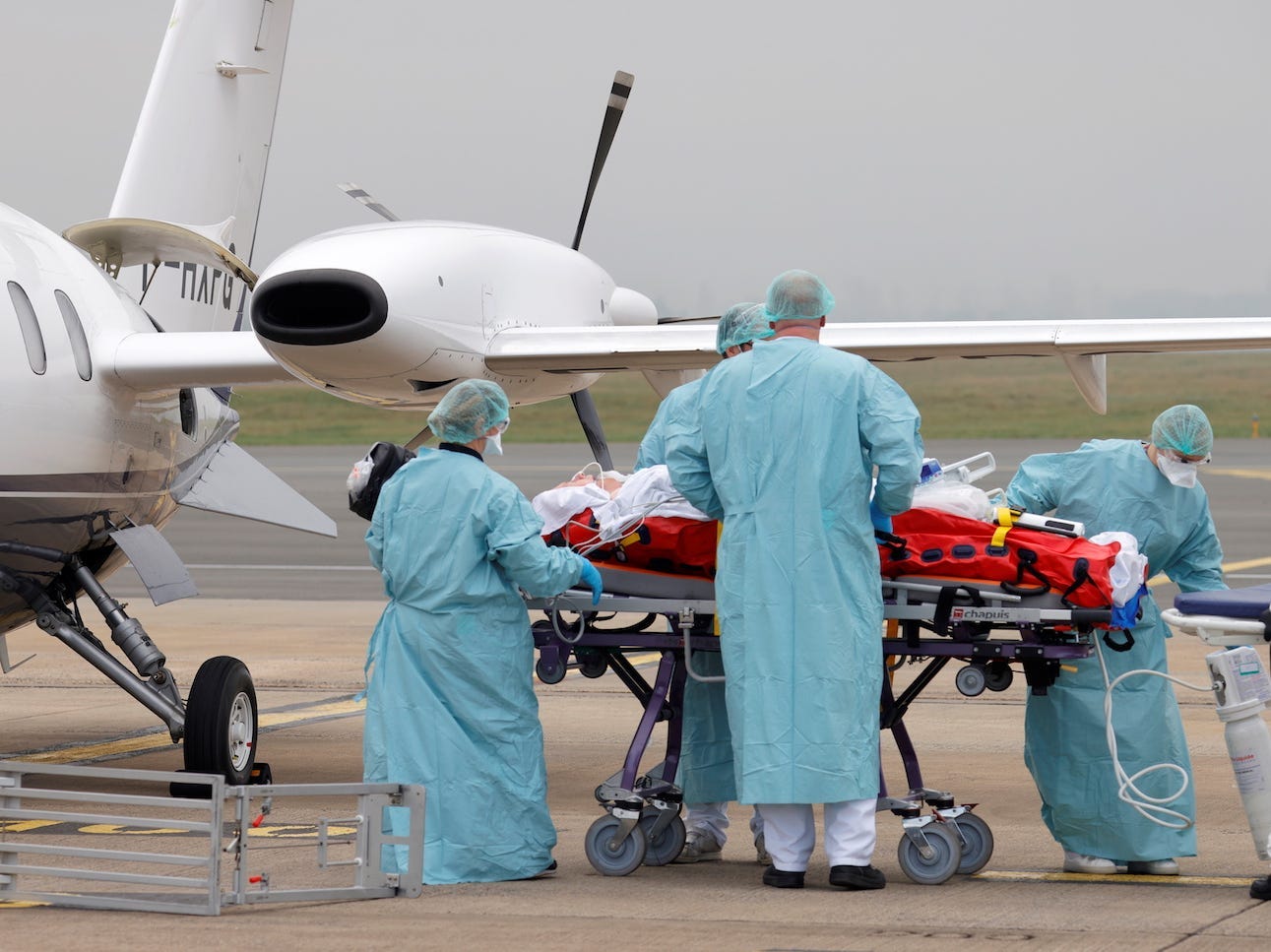 Pascal Rossignol/ReutersMedical staff members move a patient suffering from the coronavirus to a plane during a transfer operation from Lille-Lesquin airport in France to Munster airport in Germany, France, on November 10, 2020.

Germany’s health minister Jens Spahn said on October 30: “It makes us humble and grateful to be lucky enough to be able to support our neighbours. So far we have taken from the Netherlands. Of course, we will help Belgium, the Czech Republic and all our neighbours as soon as they ask and as long as we can,” according to the Guardian.

However, Germany’s partial lockdown — which was put in place on November 2 — could be extended beyond the end of the month, government officials warned. 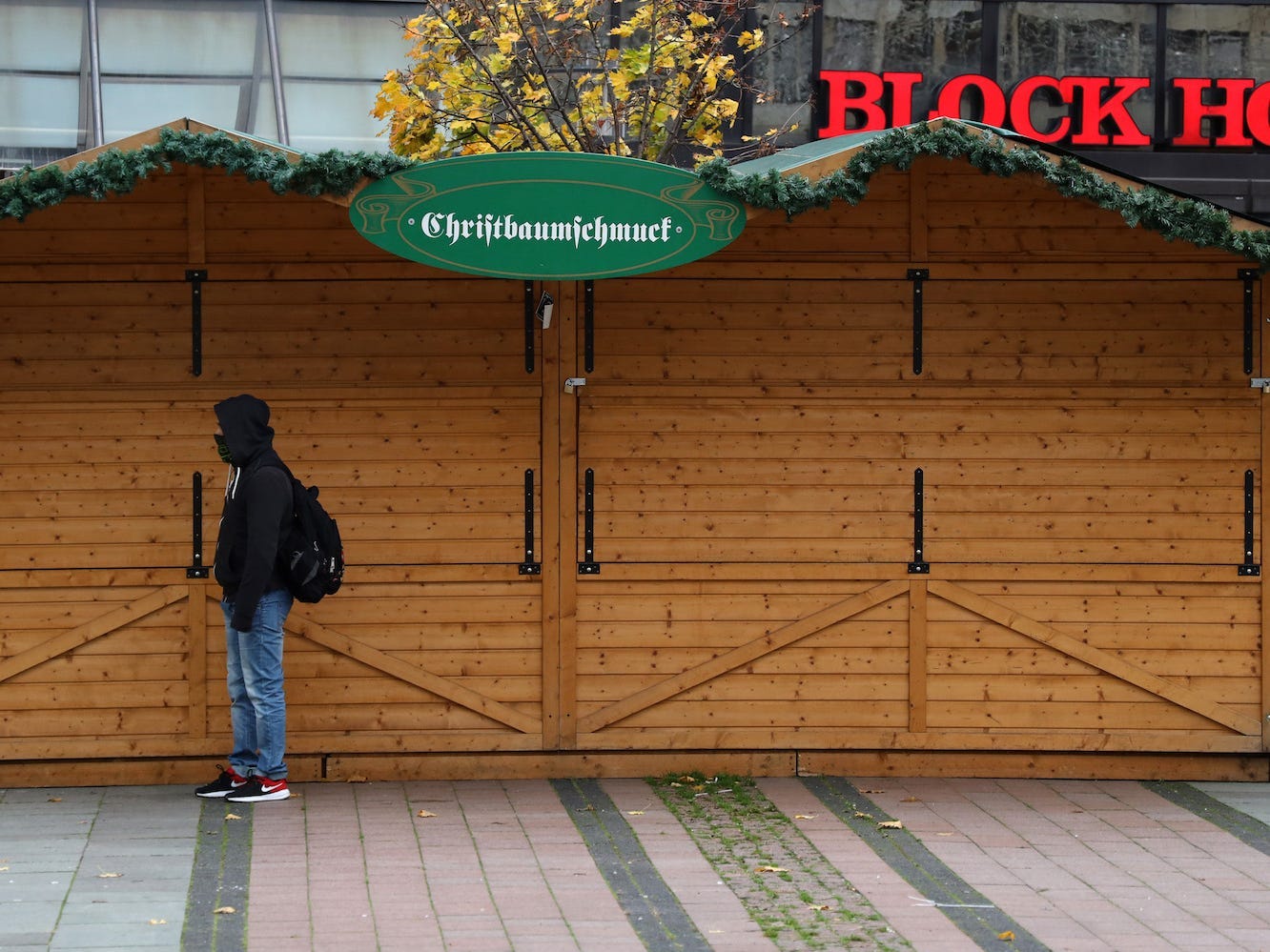 Andreas Rentz/Getty ImagesA man stands in front of a closed christmas tree decorations stall at the cancelled annual Christmas market during the second wave of the coronavirus pandemic on November 12, 2020 in Essen, Germany.

Government spokesman Stefan Seibert said lockdown measures “were not expected to be relaxed” by next week and that winter festivities were unlikely to go ahead, the Guardian reported. 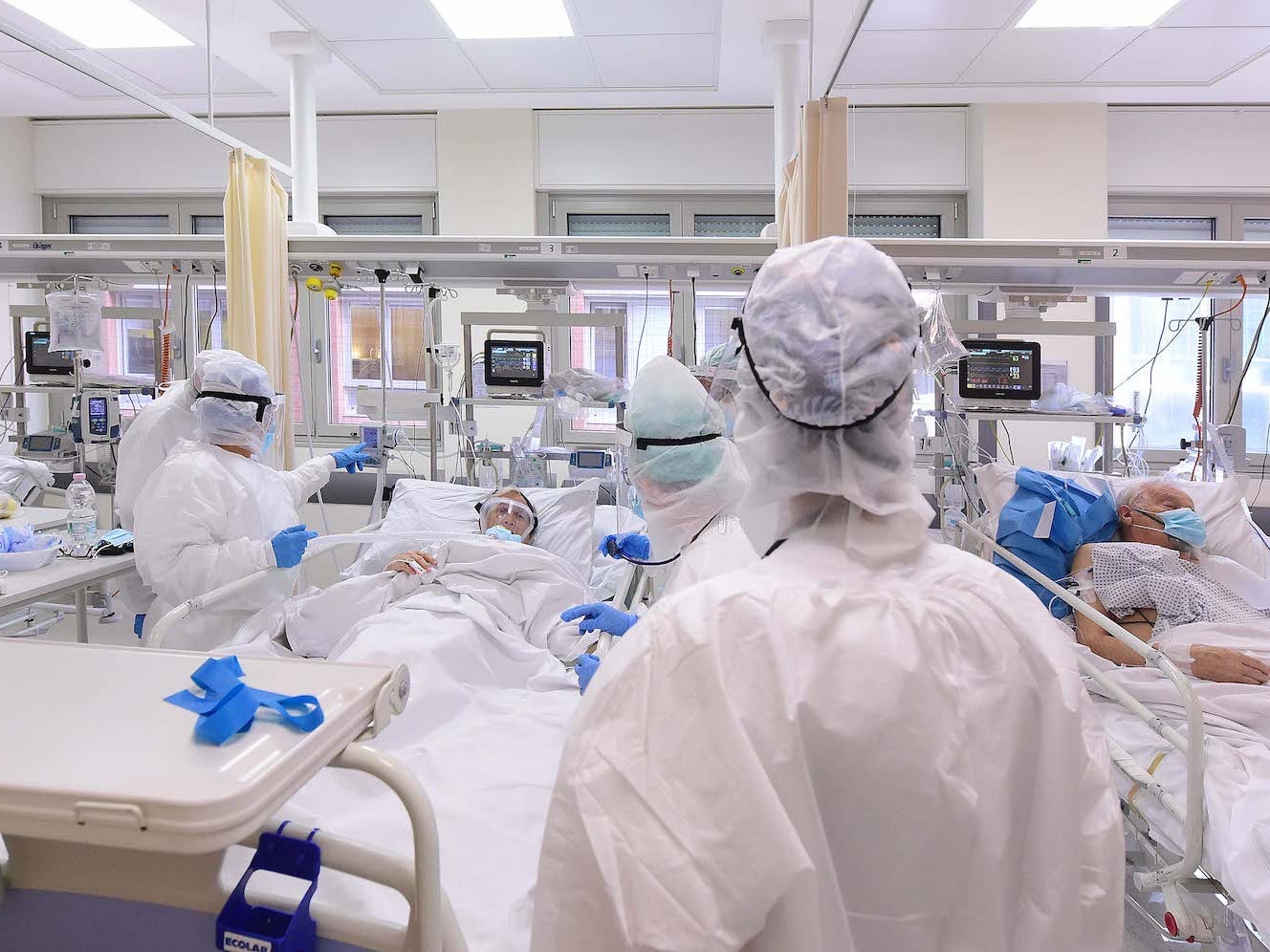 In Naples, the situation is so bad that medical staff were forced to bring oxygen tanks outside hospitals to treat patients waiting in their cars. 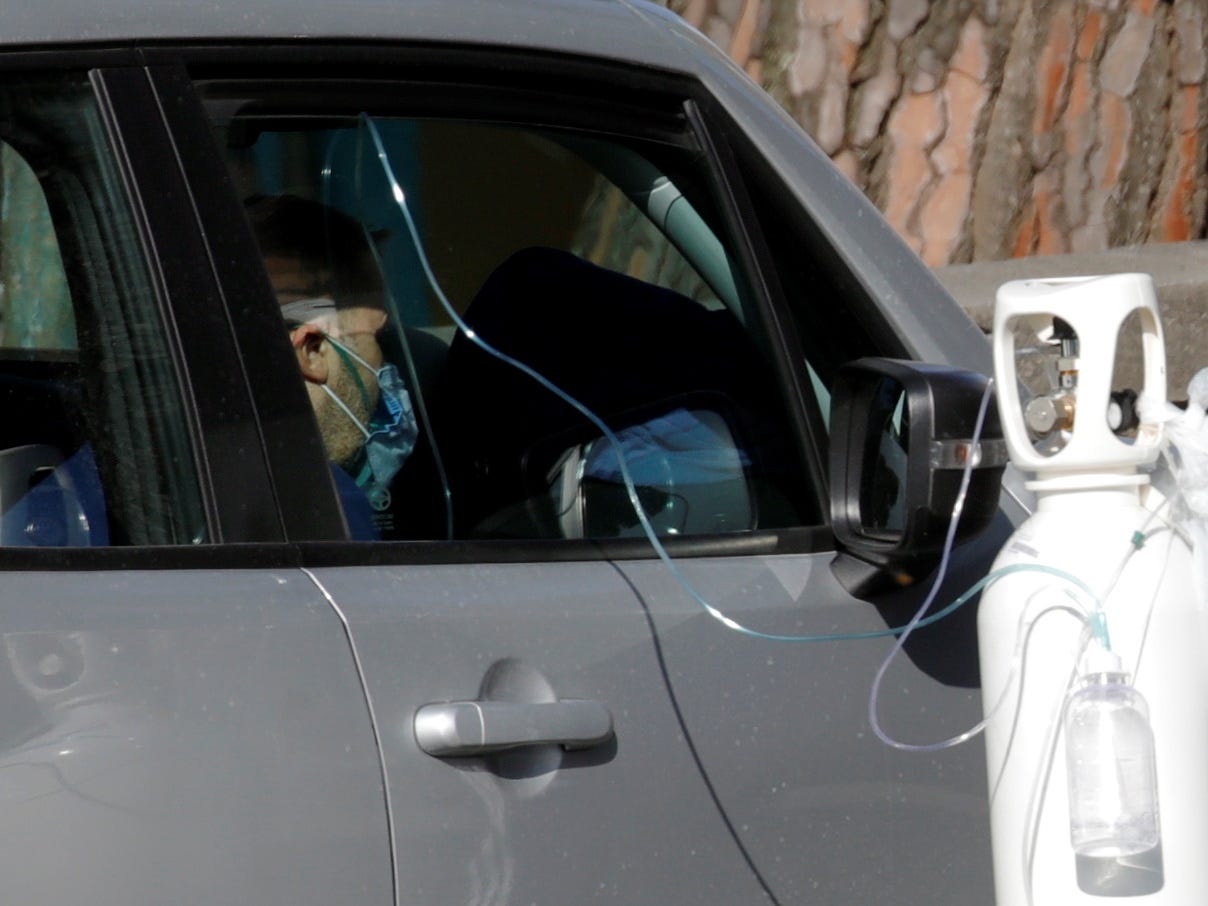 Ciro de Luca/ReutersA patient is administered oxygen whilst waiting in a car outside the Cotugno hospital as the battle with the coronavirus disease (COVID-19) intensifies, in Naples, Italy, on November 9, 2020

“The situation in Campania is out of control,” the Italian foreign minister, Luigi Di Maio, said this week. “We need urgent restrictions…people are dying.” 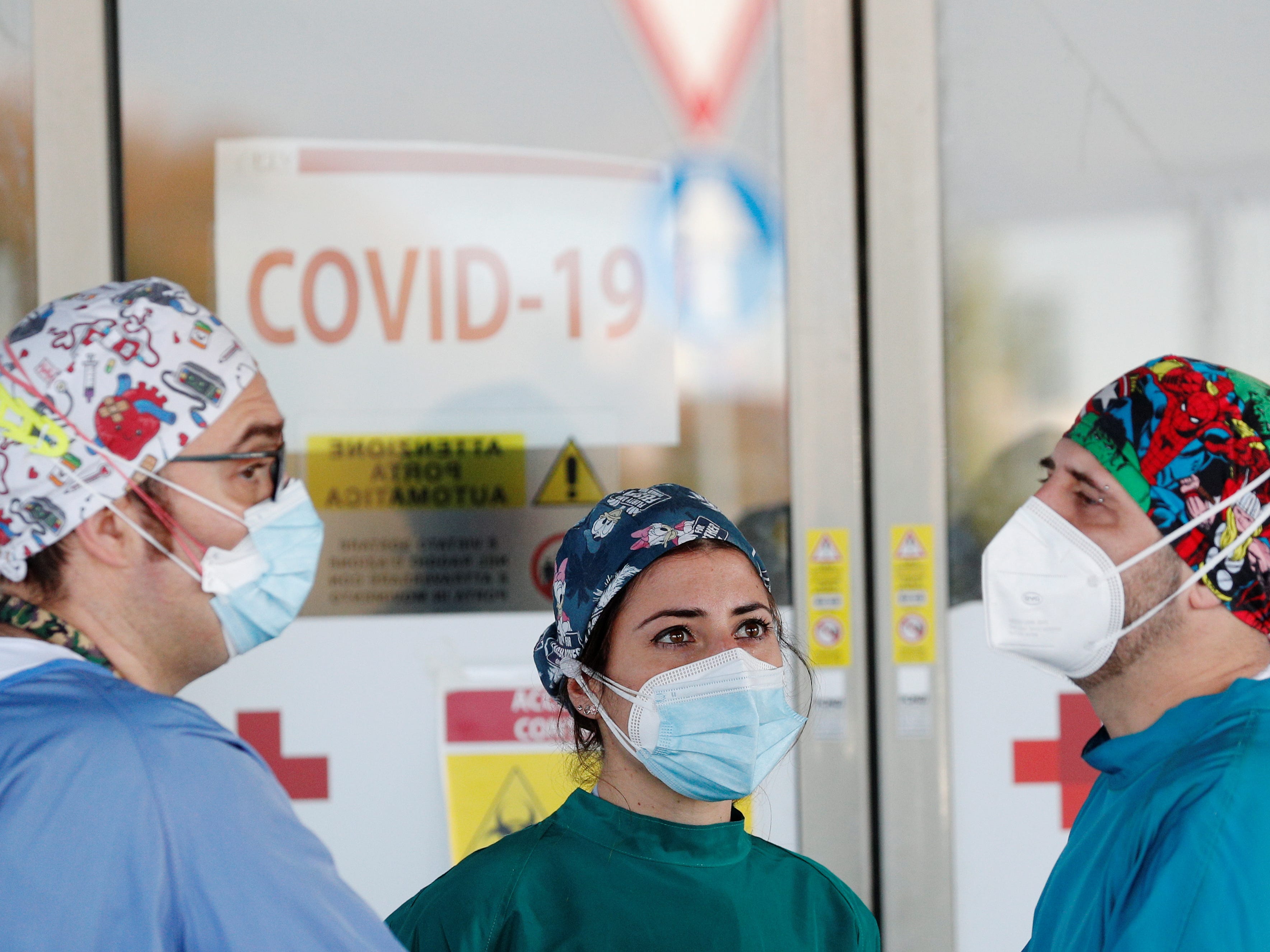 Guglielmo Mangiapane/ReutersDoctors wait for patients to arrive at the Policlinico Tor Vergata hospital where patients suffering from the coronavirus disease (COVID-19) are being treated in Rome, Italy November 13, 2020.

His comments came after a heart-wrenching video emerged of a man who died in the bathroom of a Naples emergency room while waiting to be tested. He is suspected to have had COVID-19. 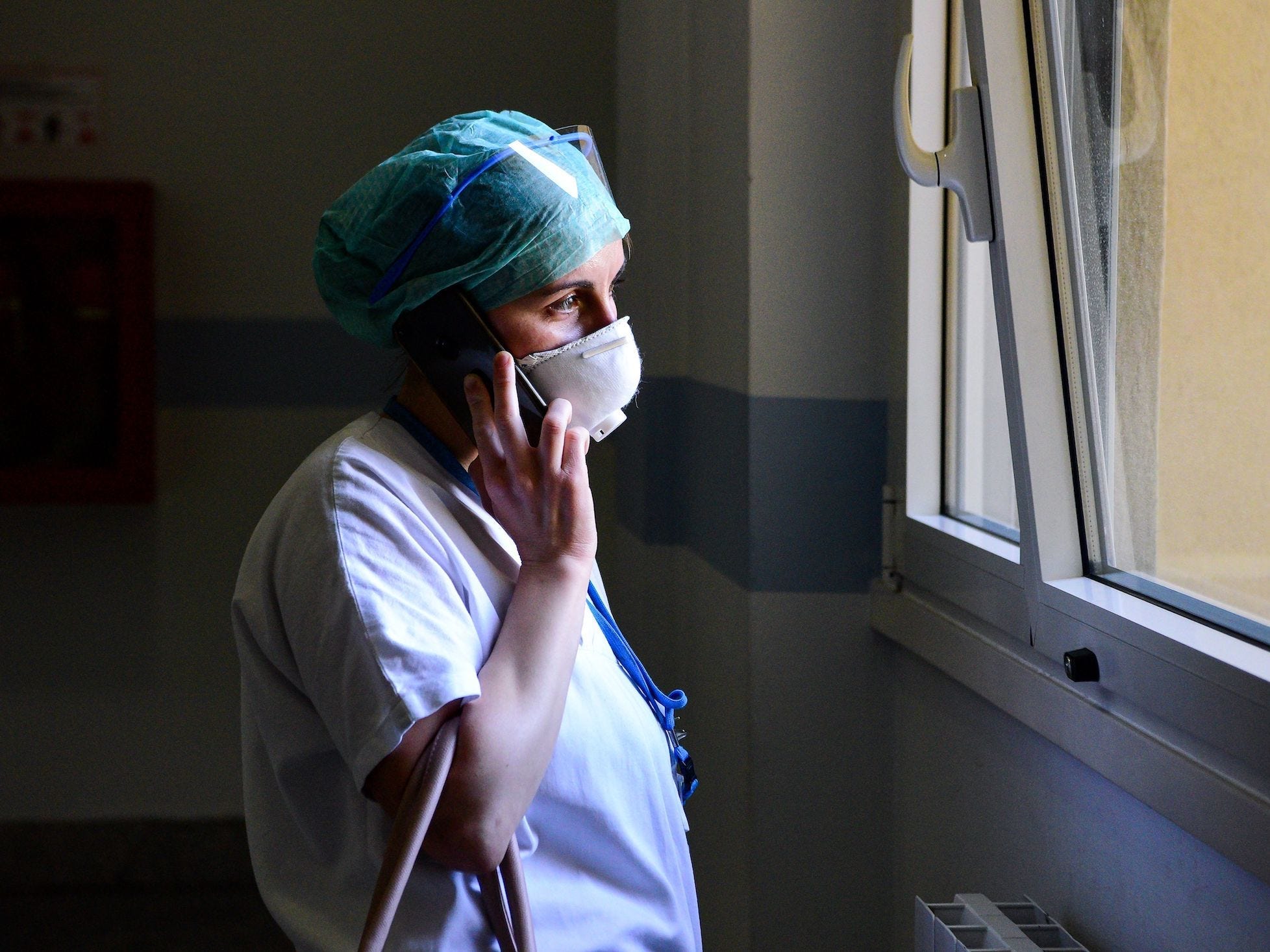 The country passed the million-mark in total infections this week, with cases rising at more than 30,000 a day. 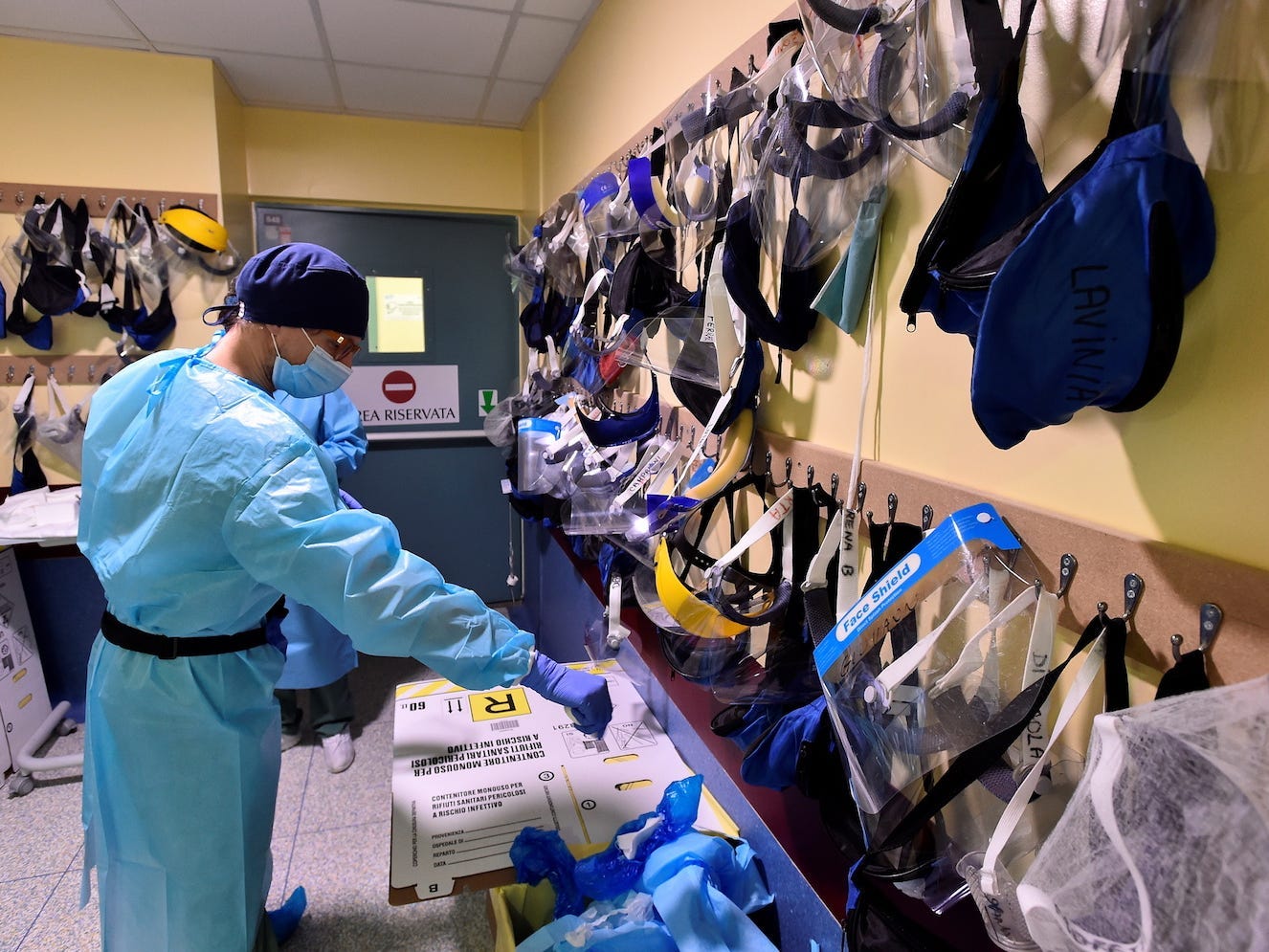 Flavio Lo ScalzoMembers of the medical personnel prepare in the emergency room of the Maggiore di Lodi hospital in Lodi, Italy, on November 13, 2020.

Some good news has come out of Belgium and the Netherlands where new infections are slowing down. However, hospital services remain under severe pressure, with Belgium having to send some of their patients to Germany to be treated. 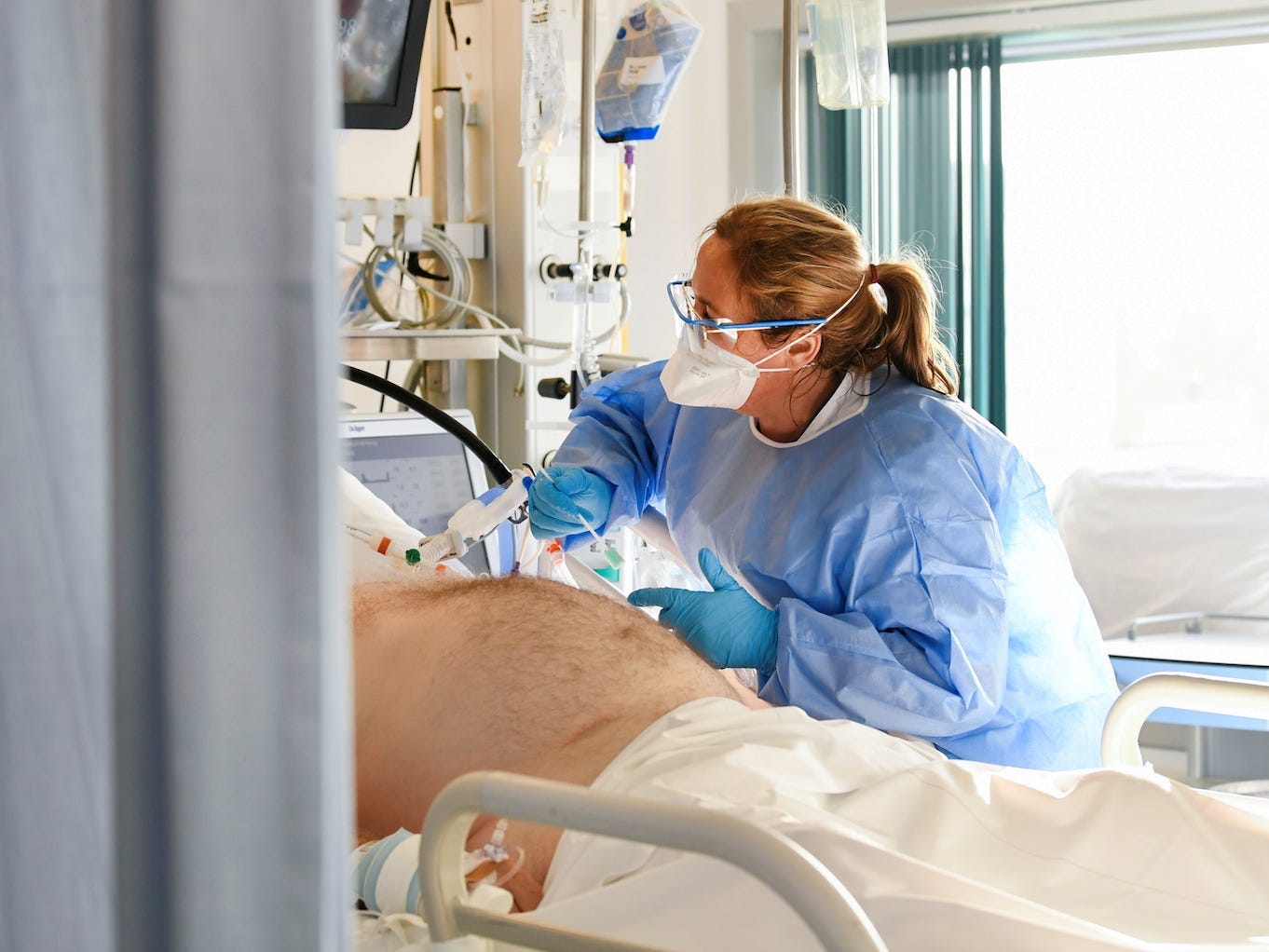 Piroschka van de Wouw/ReutersA member of the medical personnel wearing a full protective suit is seen as she treats a patient infected with COVID-19 in the intensive care unit at Maastricht UMC+ Hospital in Maastricht, Netherlands, on November 10, 2020.

Sweden — which thought its herd immunity strategy would prevent a second wave — is also struggling, reporting a record 5,990 new cases on Friday, its highest since the start of the pandemic. 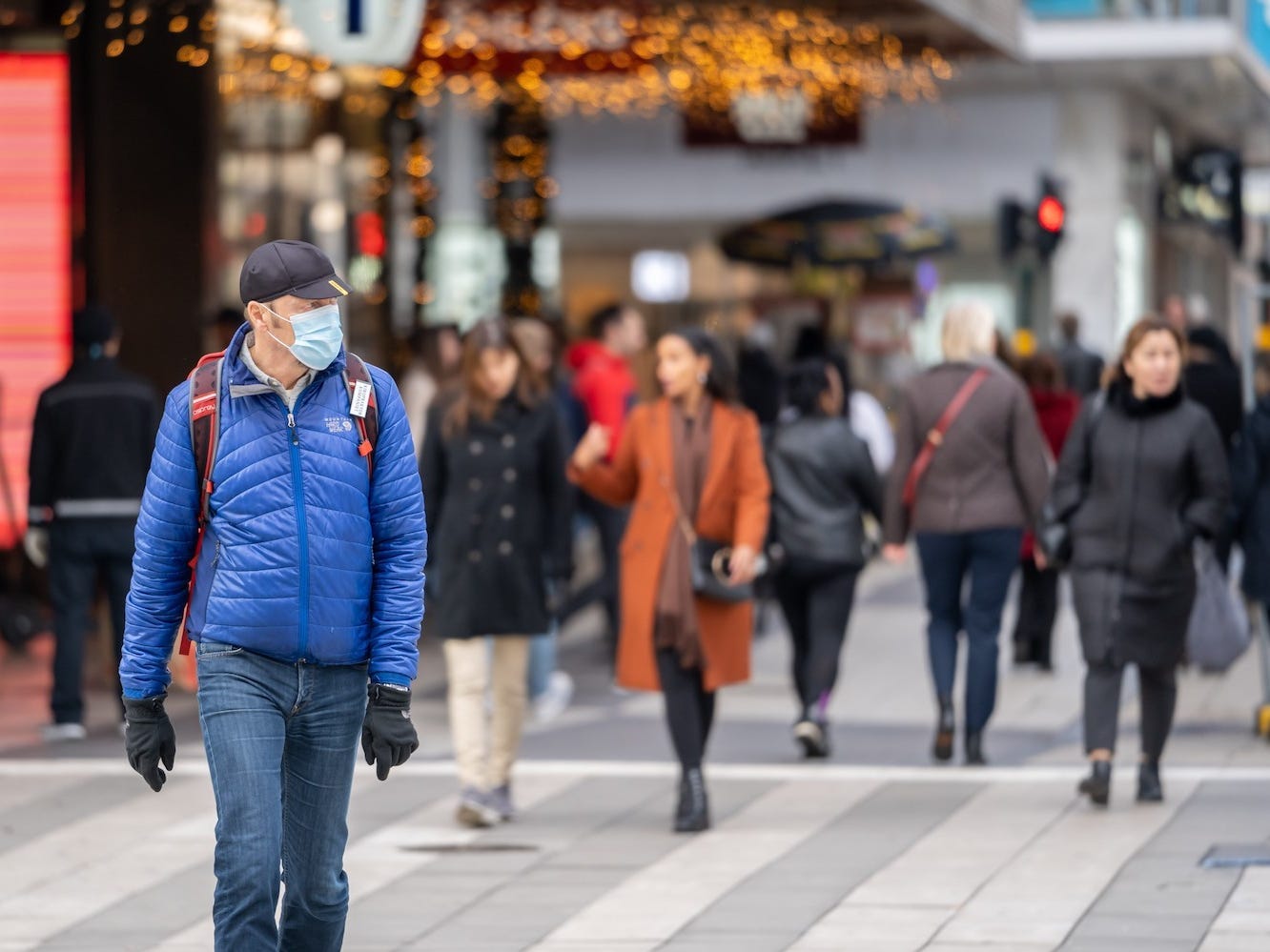 Xinhua/Wei Xuechao via Getty ImageA man wearing a face mask walks in the street during the COVID-19 pandemic in Stockholm, capital of Sweden, on November 3, 2020

Sweden’s chief epidemiologist, Anders Tegnell, admitted this week that the country is now experiencing a second wave of coronavirus despite predicting that its no-lockdown policy would prevent another wave.