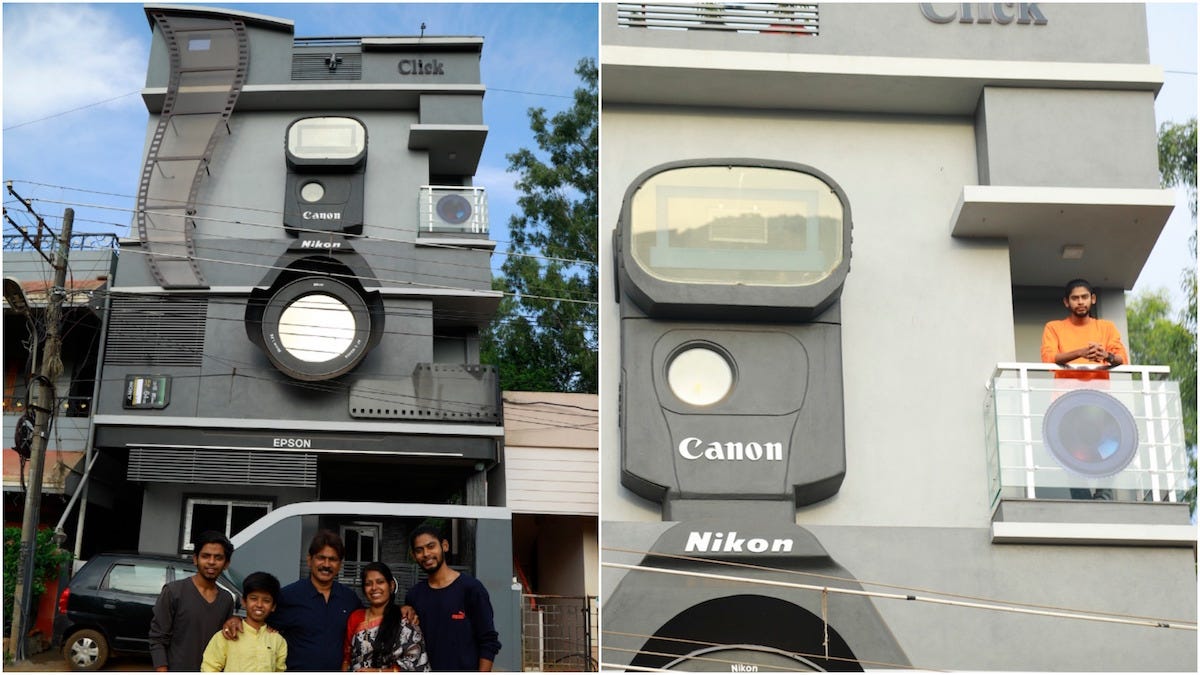 Ravi Hongal loves cameras so much that he designed a house to look just like one – and he even named his three sons Canon, Nikon, and Epson after his favourite models.

Hongal, who along with his wife and three kids moved into the home in March, told Insider that the giant camera house – aptly named “Click” and located in Shastri Nagar, Belgaum, Karnataka, India – took two years to build, costing roughly 7.5 million Indian rupee ($US102,500). 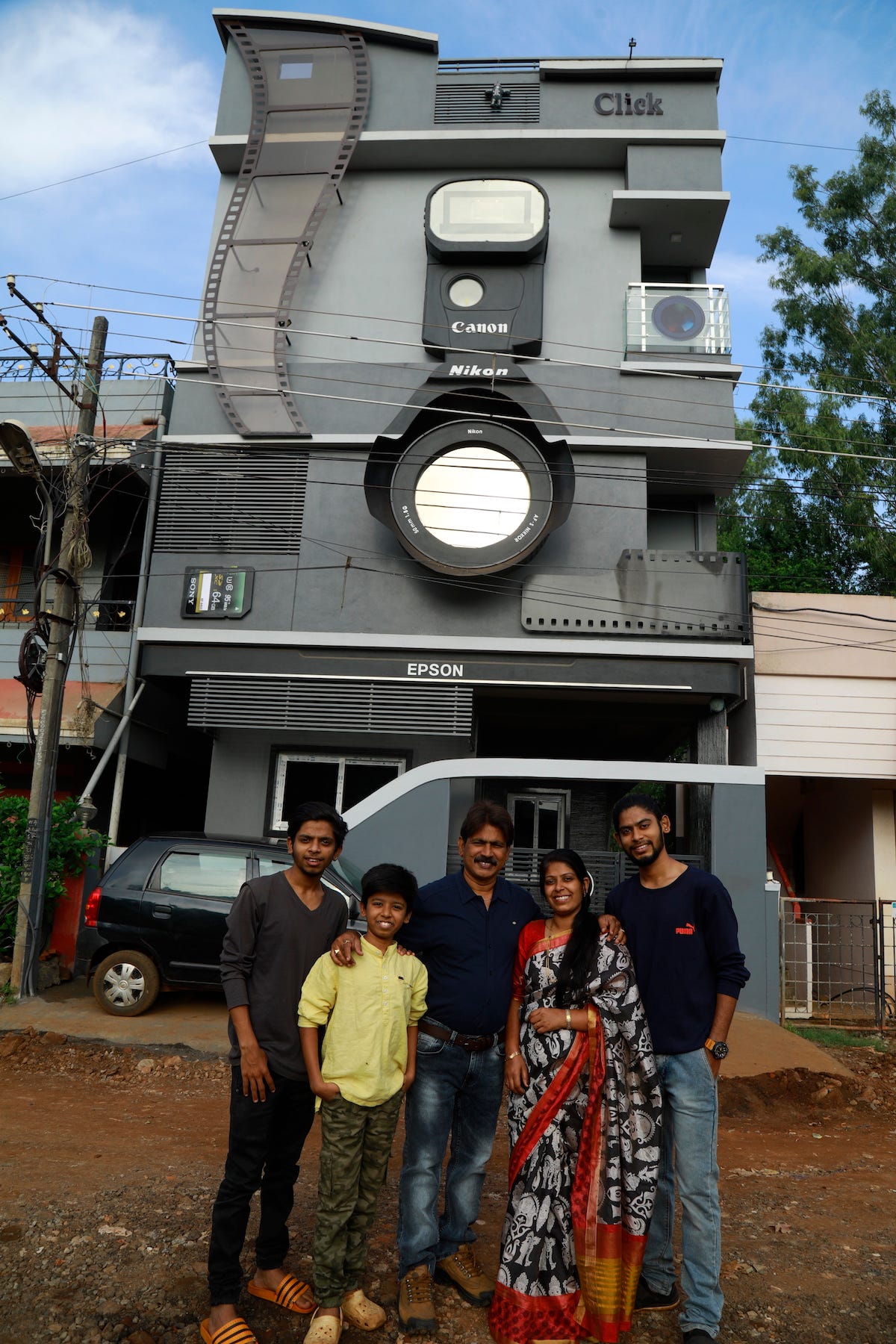 The exterior of the three-storey home is designed to represent each of his sons with a life-sized Epson camera, a Nikon camera, and a Canon flash.

Born in a small town in Belgaum district, Karnataka, India, Hongal’s love for photography started early – he was just 13 when he started following his photographer cousin Mahadev around like a shadow the learn the tricks of the trade.

“When I entered the dark room where my cousin would spend hours developing photographs, it was love at first sight,” he told Insider. “I was always fascinated by the fact that such a small device could capture a moment and develop it into a memory that would last a lifetime. It was awe-inspiring.” 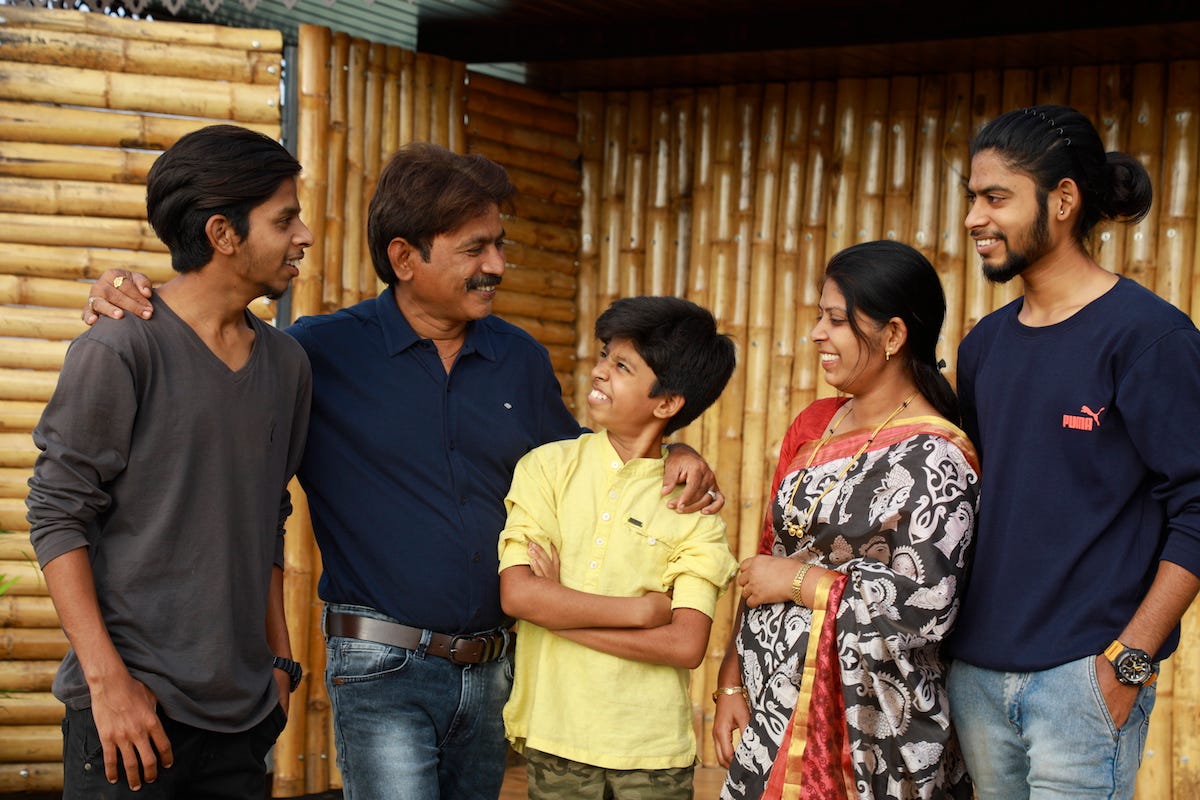 He eventually set up his own photo studio in Belgaum and married his wife, Kripa, who is also passionate about photography, according to Hongal – so much so that when she became pregant with their first child, they decided to name him Canon.

Despite the flak that they received for the decision, they ended up naming the sons that followed Nikon and Epson.

Making the dream a reality 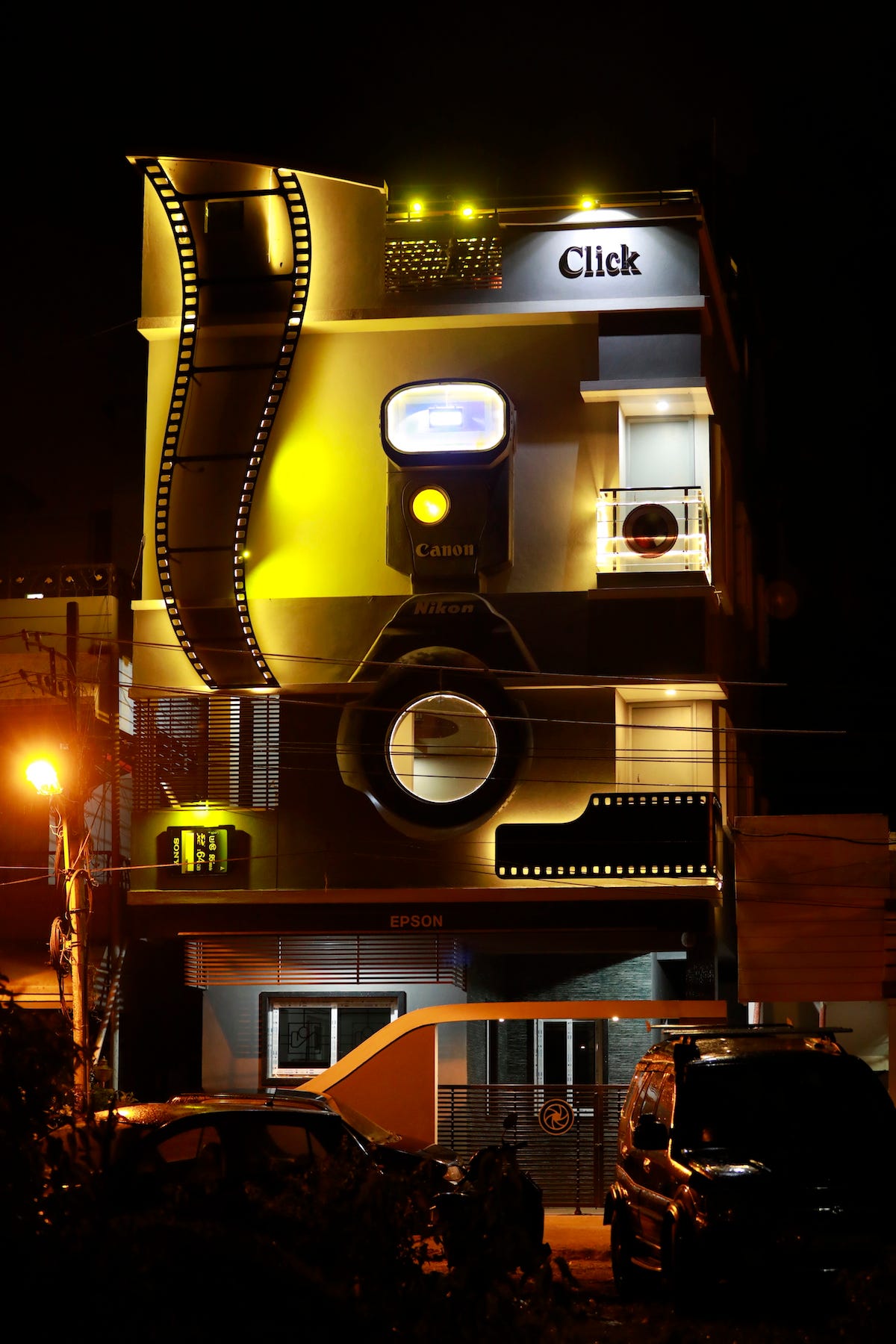 Ashok Sangamesh JidagiThe exterior is built to incorporate features of a DSLR camera.

10 years ago, Hongal decided to build his family a home shaped like a camera, but it took eight years to come up with the money to pursue the project.

In 2018, he finally saw his vision become reality when he hired Key Concepts Interiors, an architecture firm based in Bangalore, to design his dream home. 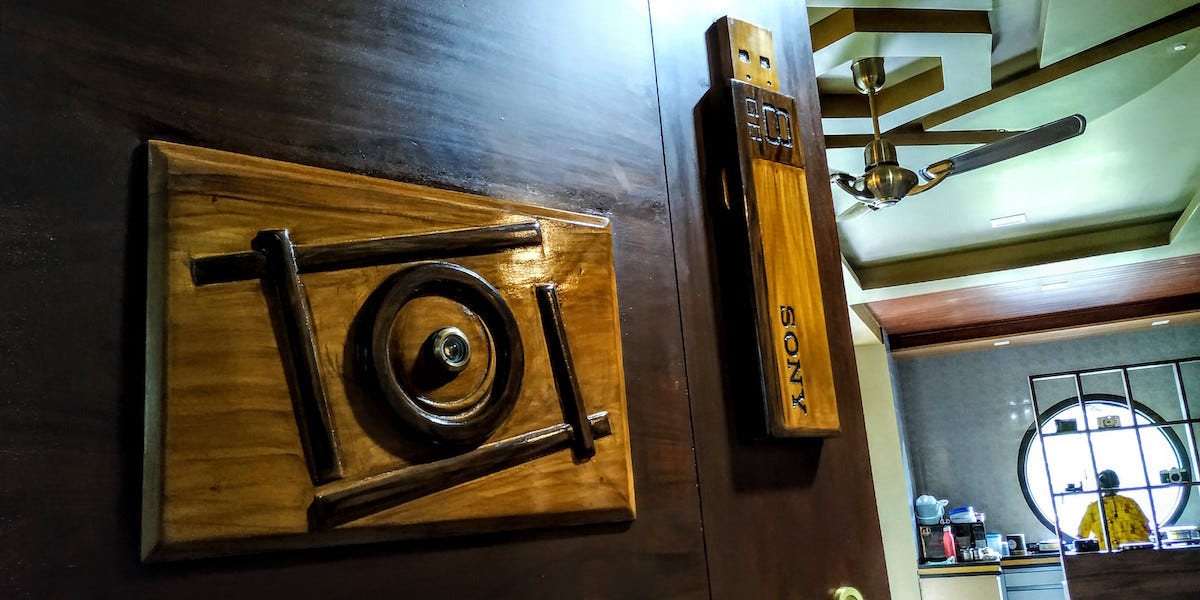 The house is adorned with film reels that were used by old cameras, as well as a Sony memory card.

“While we wanted the exterior to represent a camera, we did not want the interior to lack extraordinaire,” Hongal told Insider.

“From the gate to the window grills we got everything customised with a symbol of the camera. Our main door has a camera on it too, and also a Sony pen drive to represent different aspects of being on the job.” 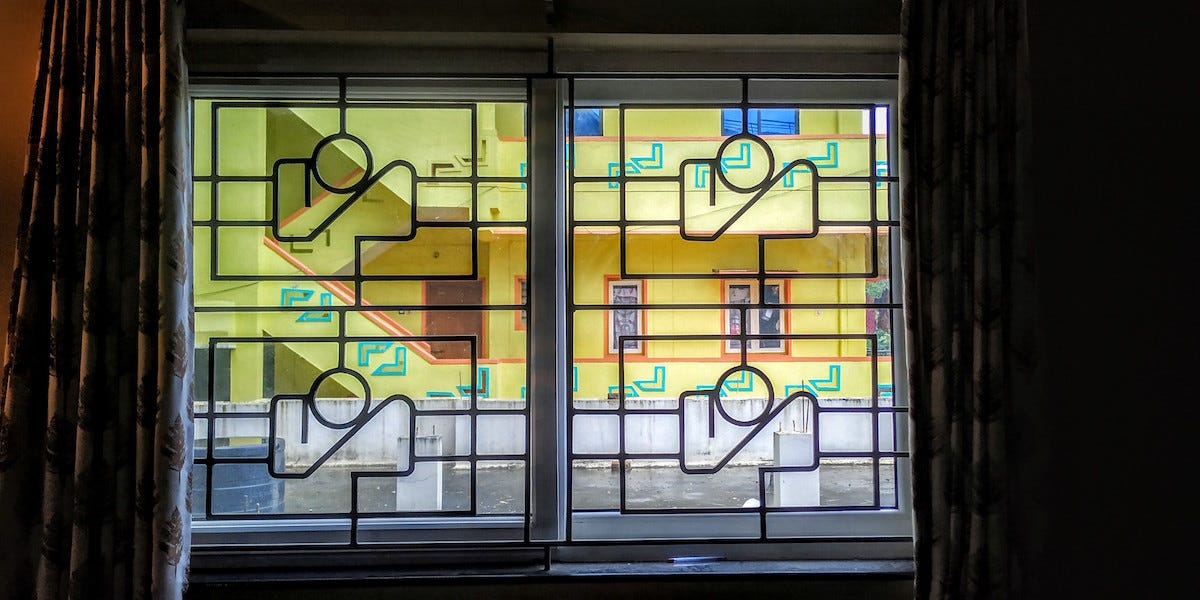 “The ceilings of the home are also designed to characterise the various facets of the camera,” he added. 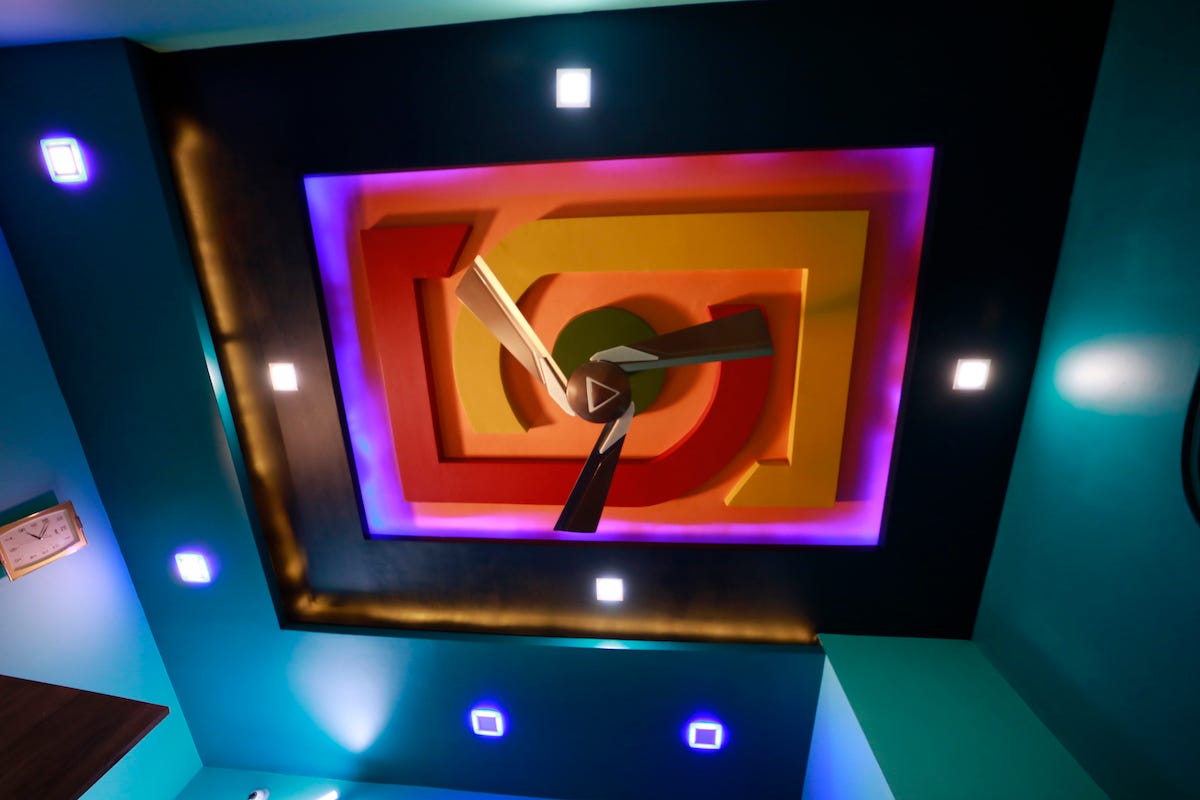 Putting his hometown on the map

Speaking to Insider, Kripa said that the house her husband was inspired to build is a nod to “the profession that has given us the means to live the life we aspired to have.”

Undeterred by the opinions of others, Hongal is proud to have put his hometown on the map.

“I look at my house and every time I see this lifesize camera looking at me, I pinch myself and my eyes well up with tears,” he said. “I cannot believe I’m living my dream.”

11 homes that are out of this world

A couple bought a decaying historic home in North Carolina for $US85,000, and they spent 18 months and $US90,000 renovating it – take a look at the before-and-after photos