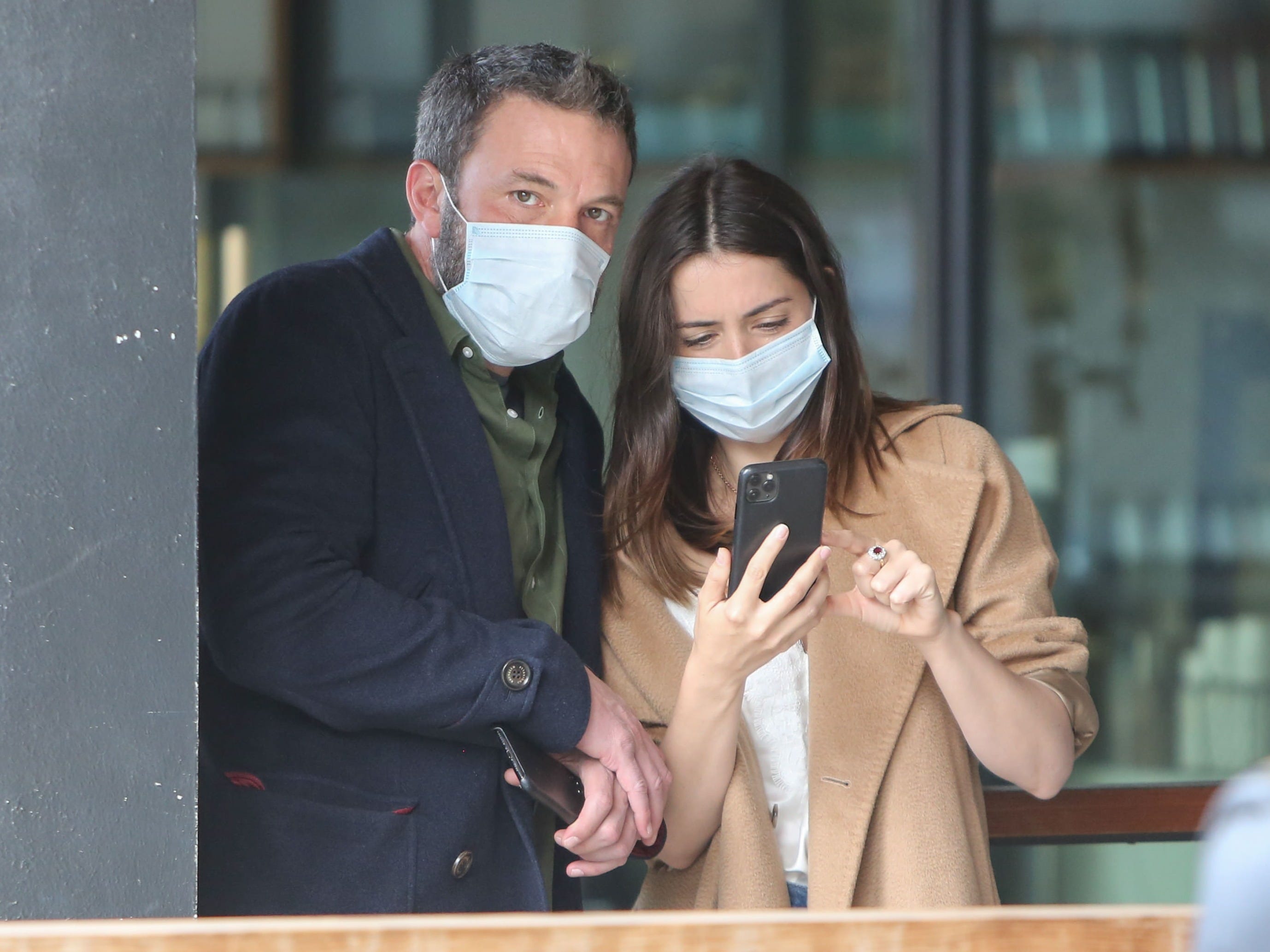 Since the CDC stated that everyone should cover their nose and mouth in public, many celebrities have been photographed following the guidelines.

Without premieres or fancy events to go to, most celebs these days are seen doing the same stuff as the rest of us, like walking their dogs or going grocery shopping.

One of Hollywood’s longest-lasting couples, Goldie Hawn and Kurt Russell, kept it safe and masked up for a bike ride together.

Take a look at photos of celebrities wearing masks that show they’re just like us.

Supermodel and former Victoria’s Secret Angel Alessandra Ambrosio kept it casual and safe on a run with her dog. 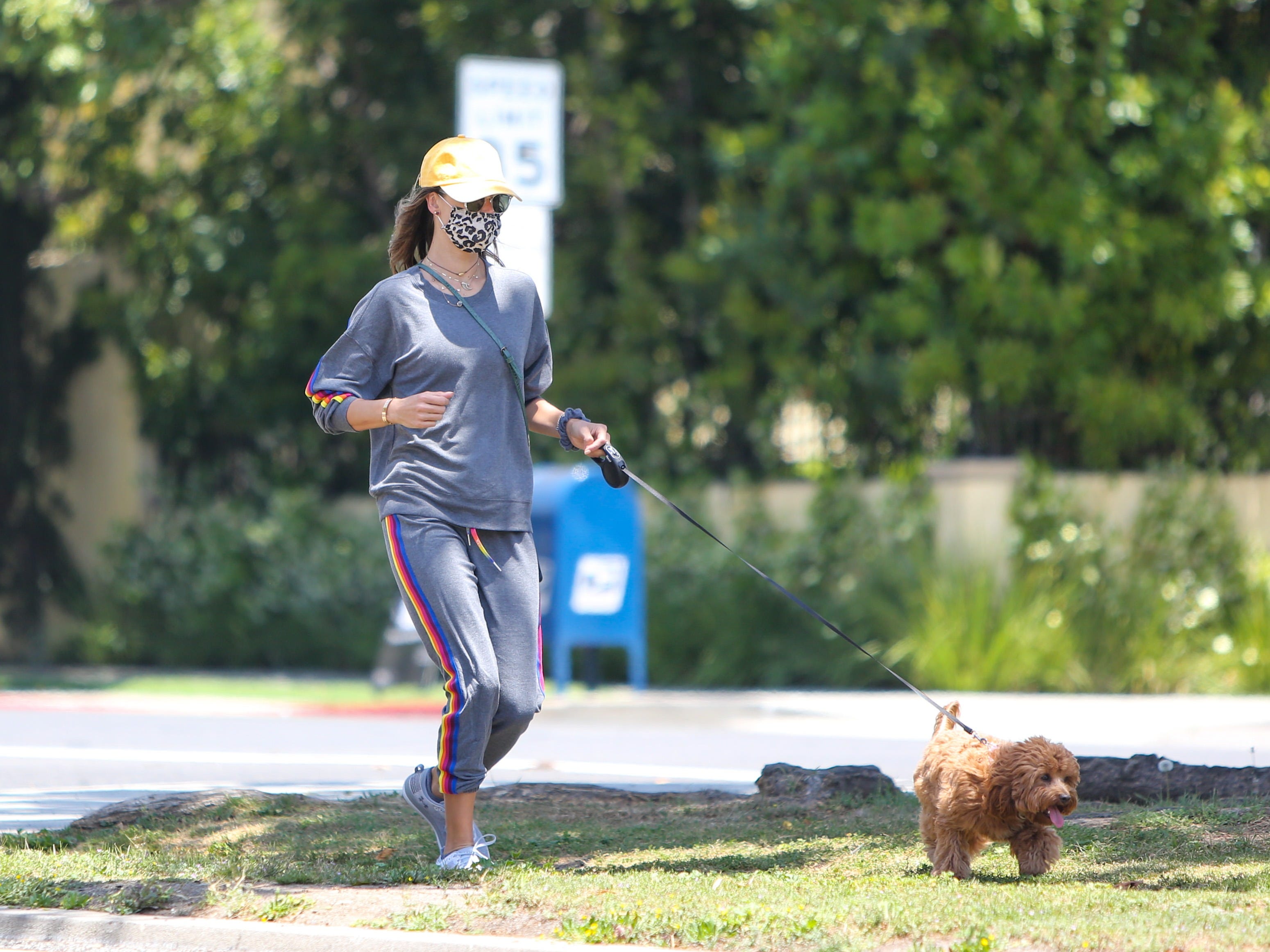 Ambrosio recently shared a few glamorous throwback photos taken in the Maldives prior to the pandemic.

Academy Award winner Allison Janney looked just like the rest of us as she loaded groceries into the back of her car while wearing a mask and gloves. 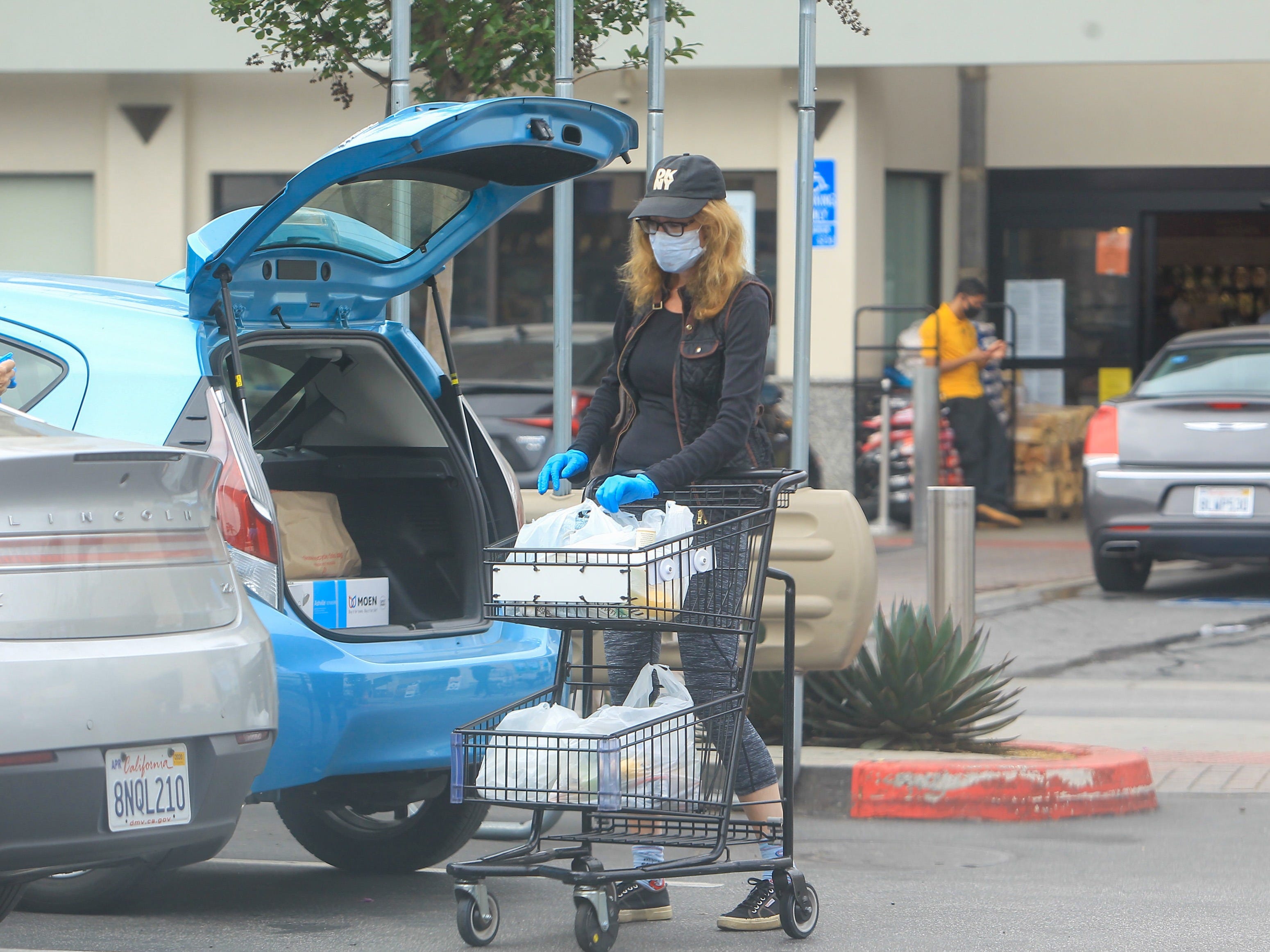 Janney recently won $US10,000 dollars on “The Ellen DeGeneres Show,” and donated it to a food bank in Dayton, Ohio, where she is staying with her family.

“Terminator” star and former governor of California Arnold Schwarzenegger donned a mask for a bike ride in Los Angeles. 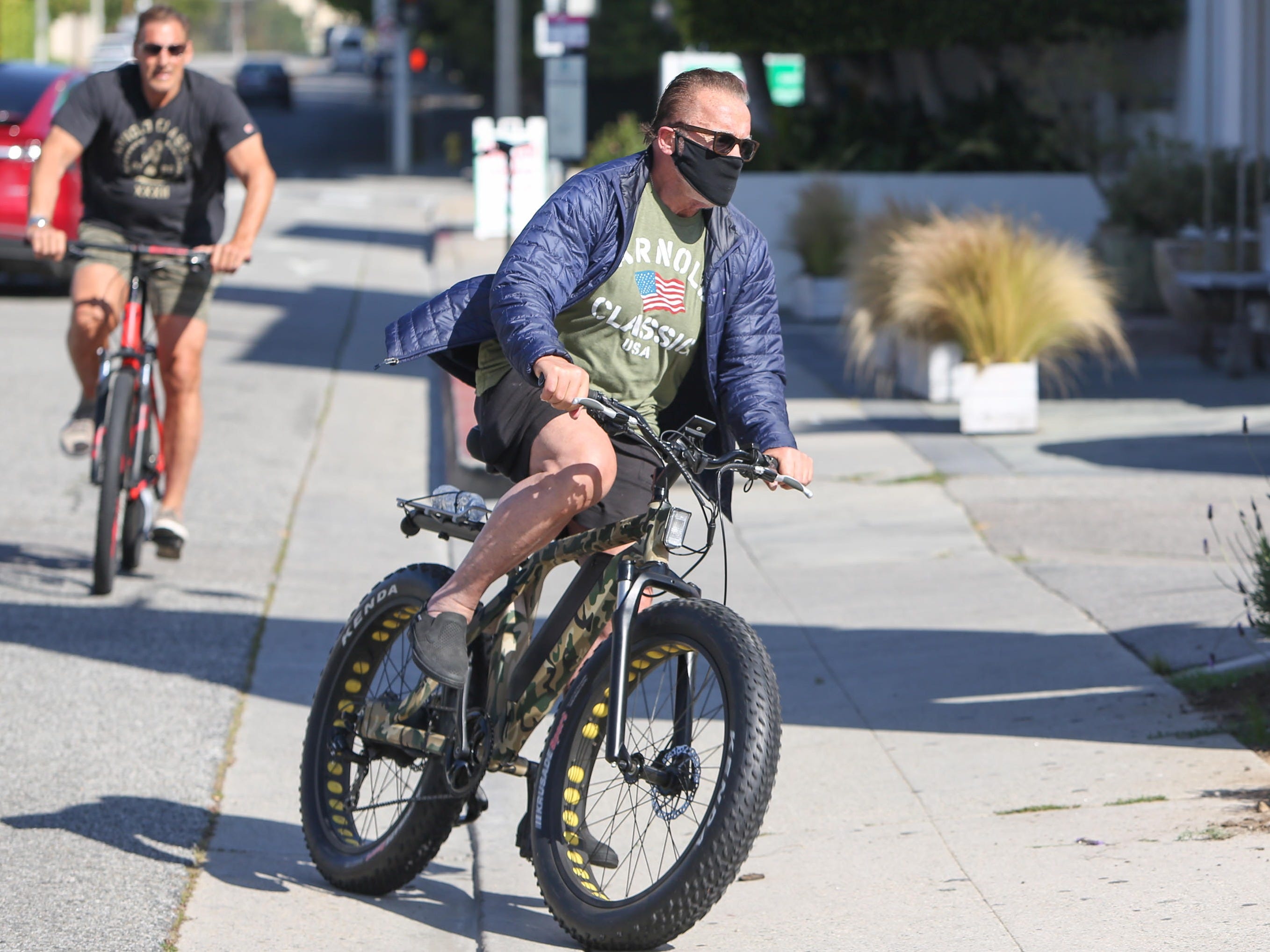 In March, Schwarzenegger shared his 9-step, equipment-free, home workout to help others stay fit while stuck at home.

“Parks and Recreation” star Aubrey Plaza sported a colourful red mask while taking her adorable pups for a walk. 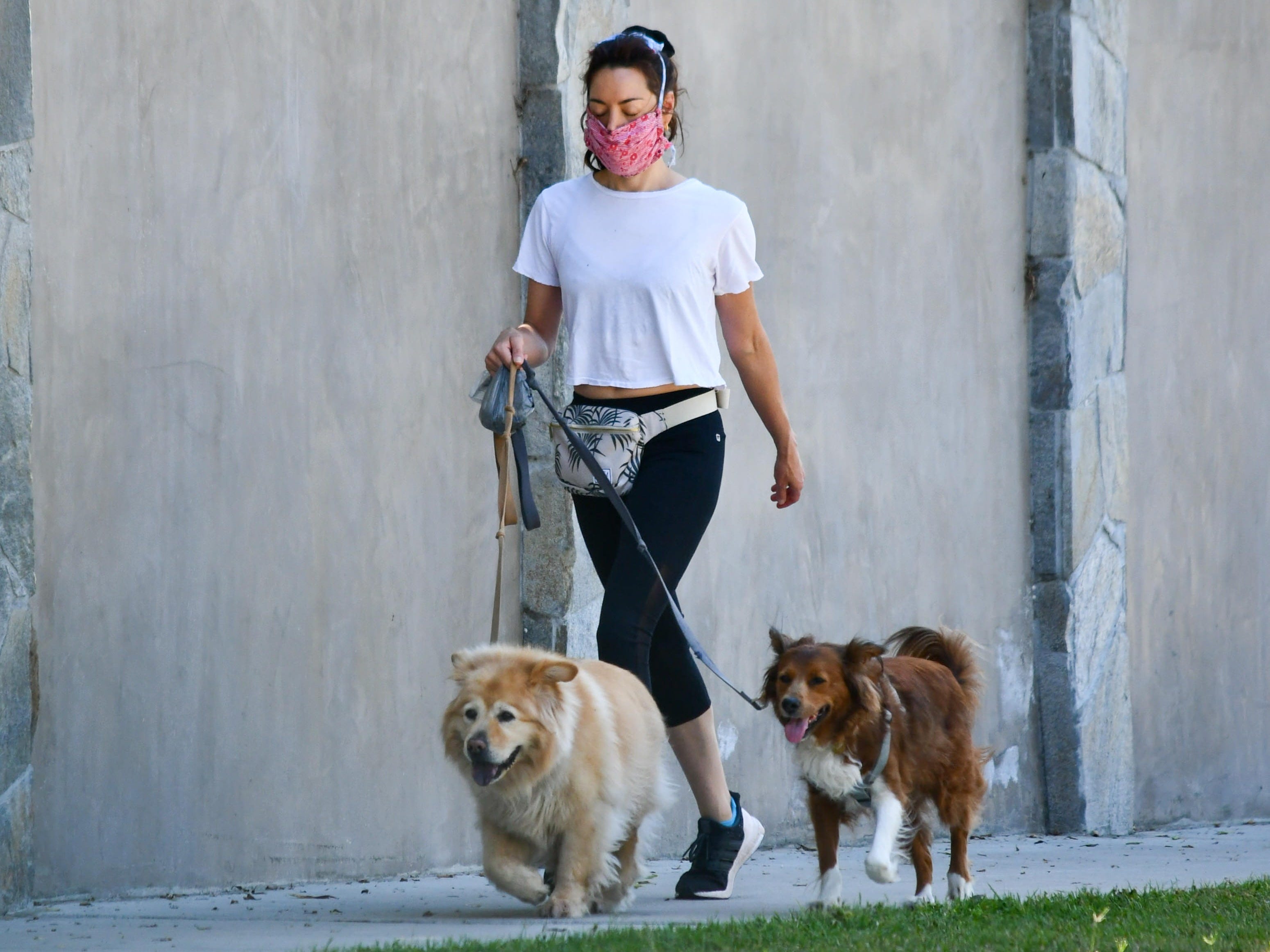 Plaza also starred in the 2020 thriller “Black Bear,” which premiered at Sundance.

“High School Musical” star Ashley Tisdale looked cosy and and safe while on a walk with husband Christopher French. 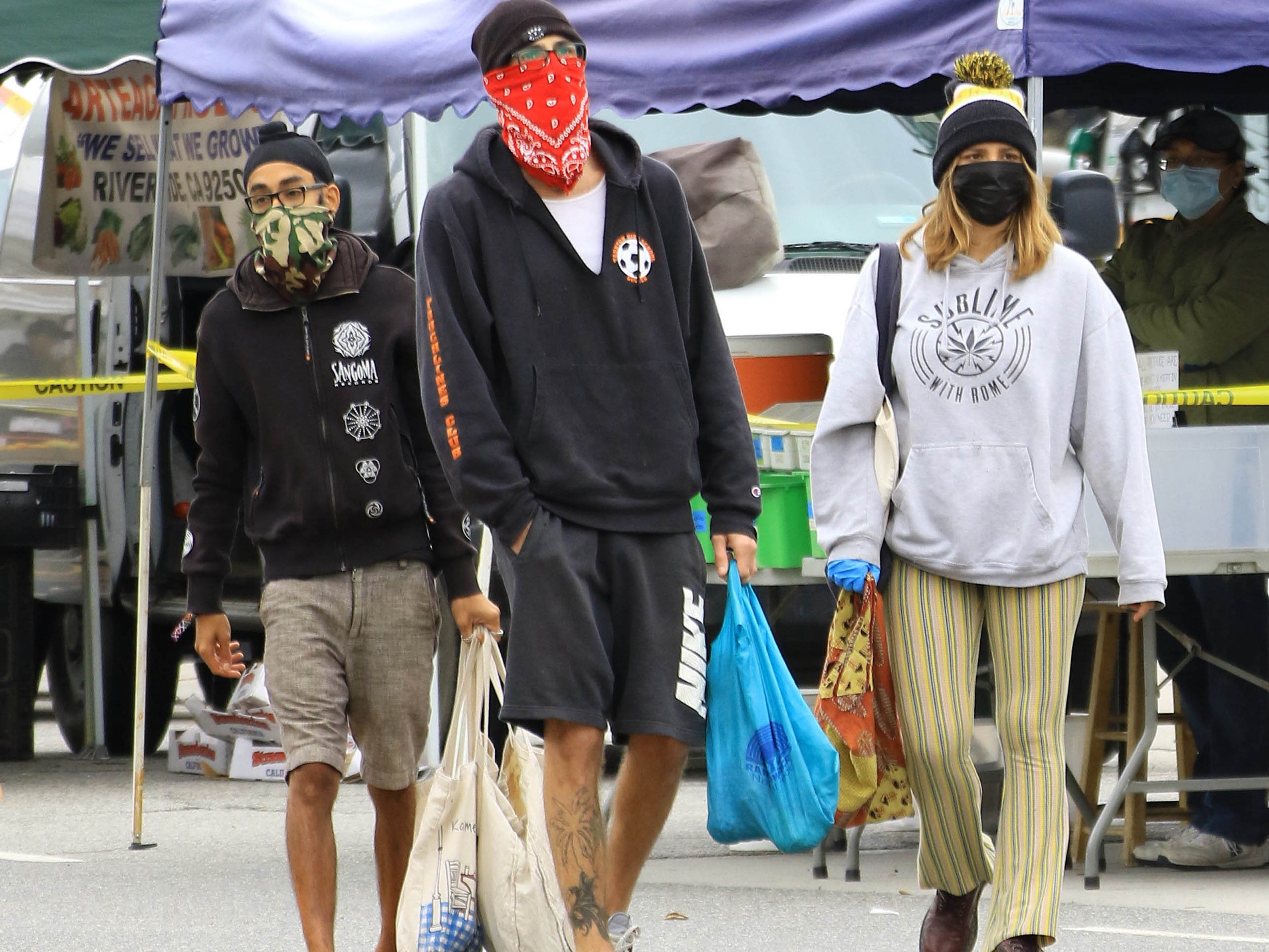 Tisdale has become a hit on TikTok during lockdown. She shared a video of herself recreating scenes from “High School Musical.”

Celebrity couple Ben Affleck and Ana de Armas shared a masked moment together, until Affleck was distracted by the paparazzi. 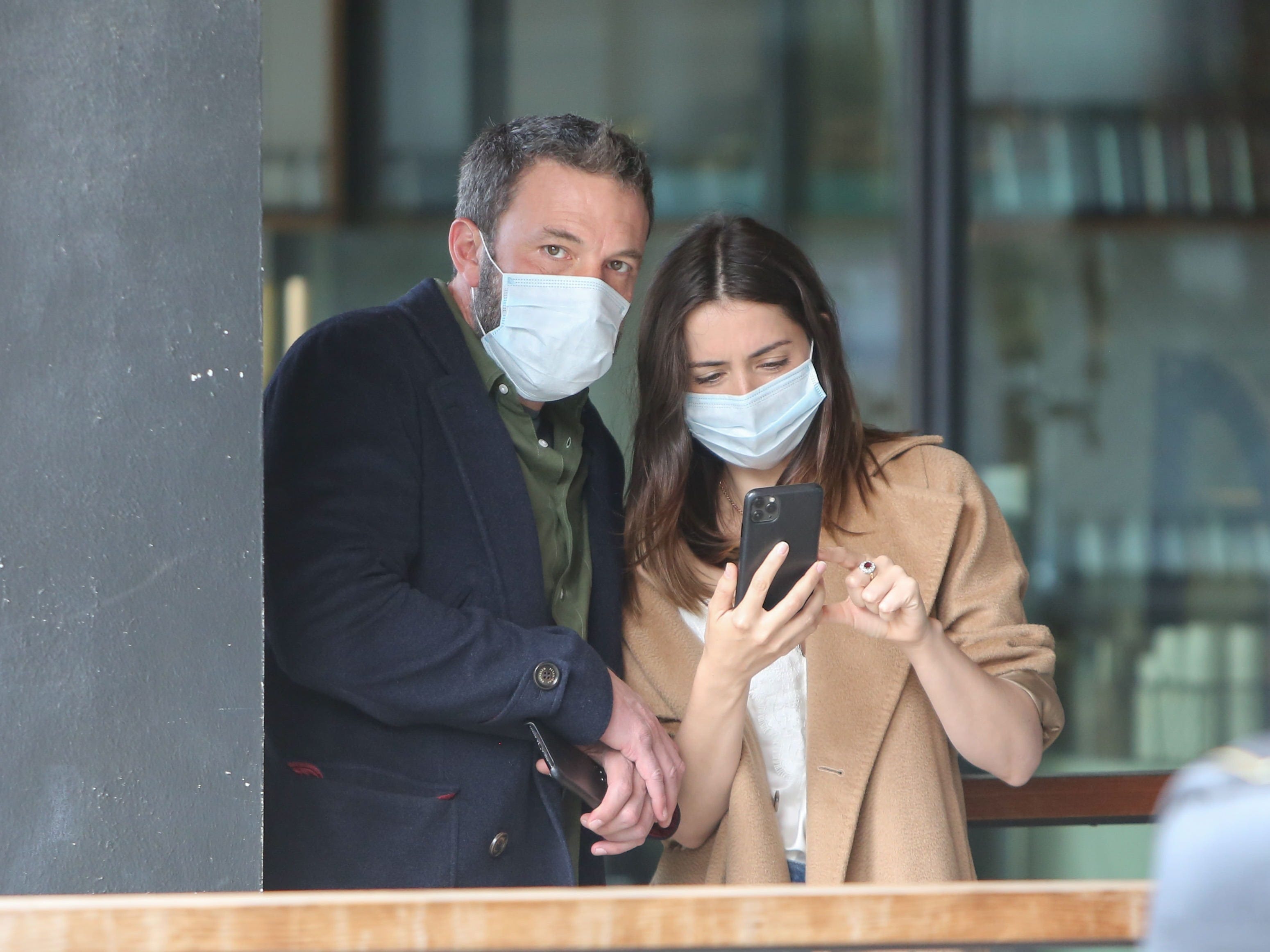 As Insider previously reported, the pair met while filming “Deep Water” in New Orleans in 2019. Though they maintained a professional relationship on set, they were spotted travelling together in Cuba after filming wrapped.

Affleck was also spotted on his own, taking his German shepherd for a walk. 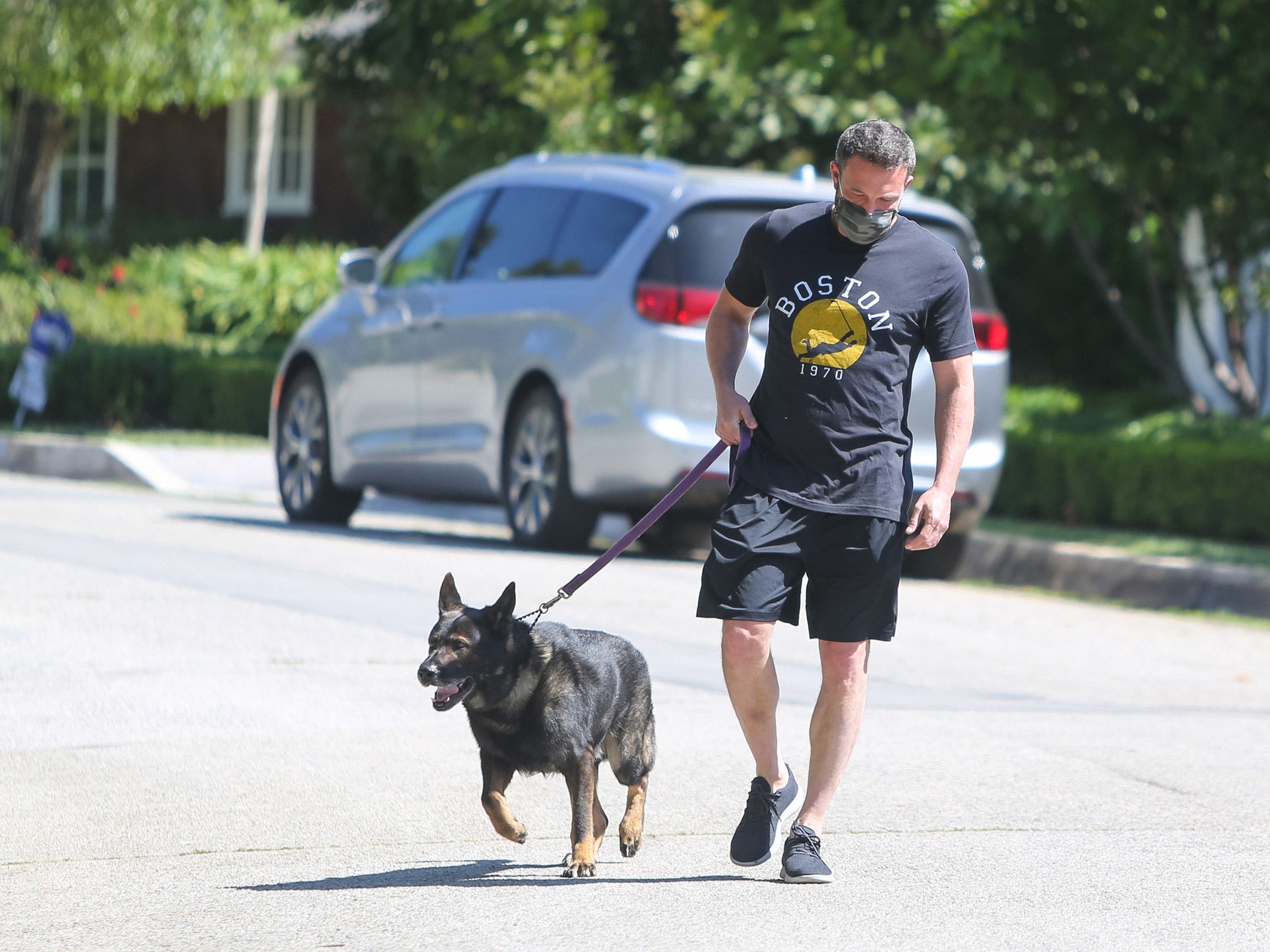 Affleck went on a family dog walk with his children and Ana de Armas over Memorial Day weekend. 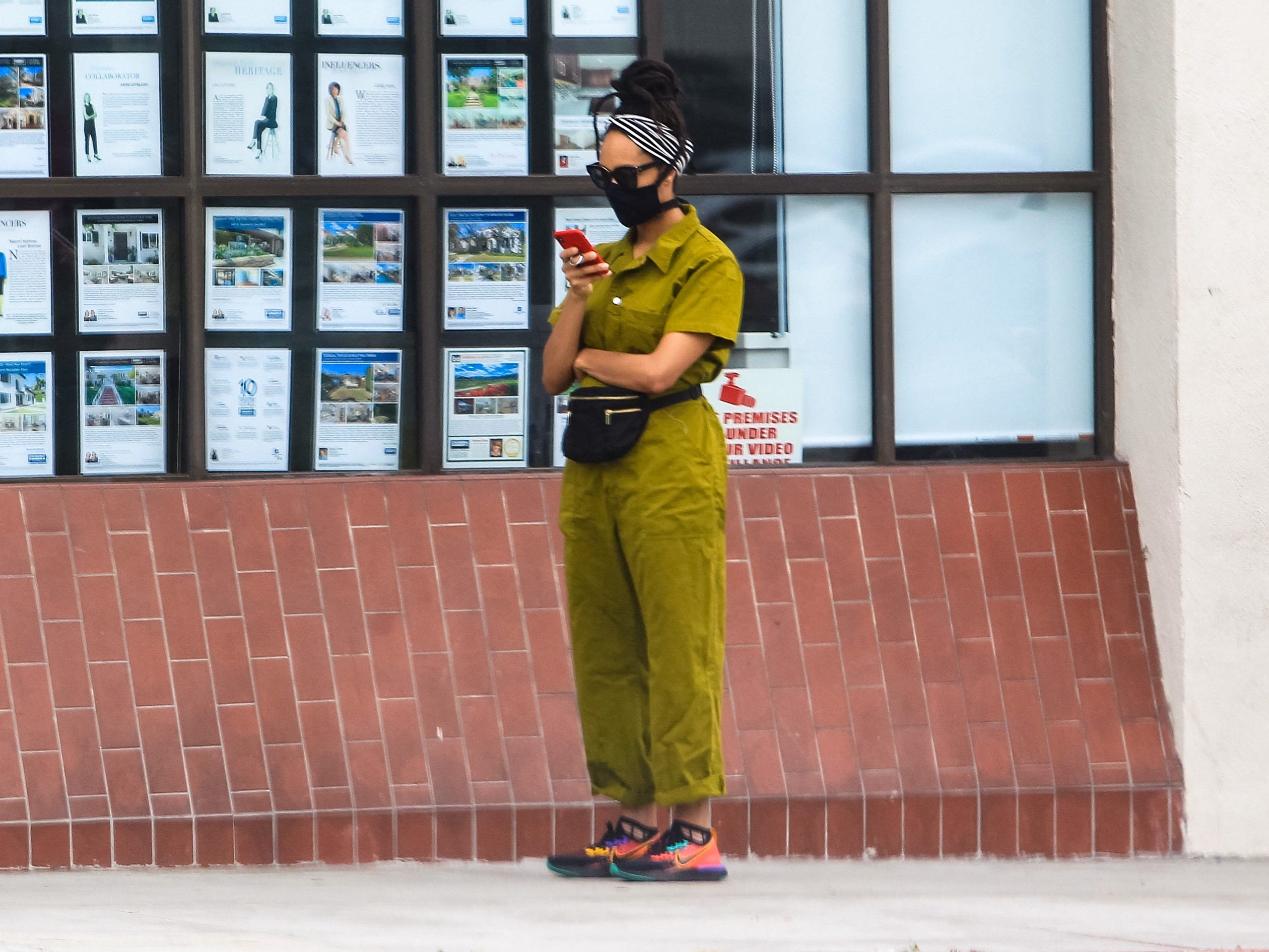 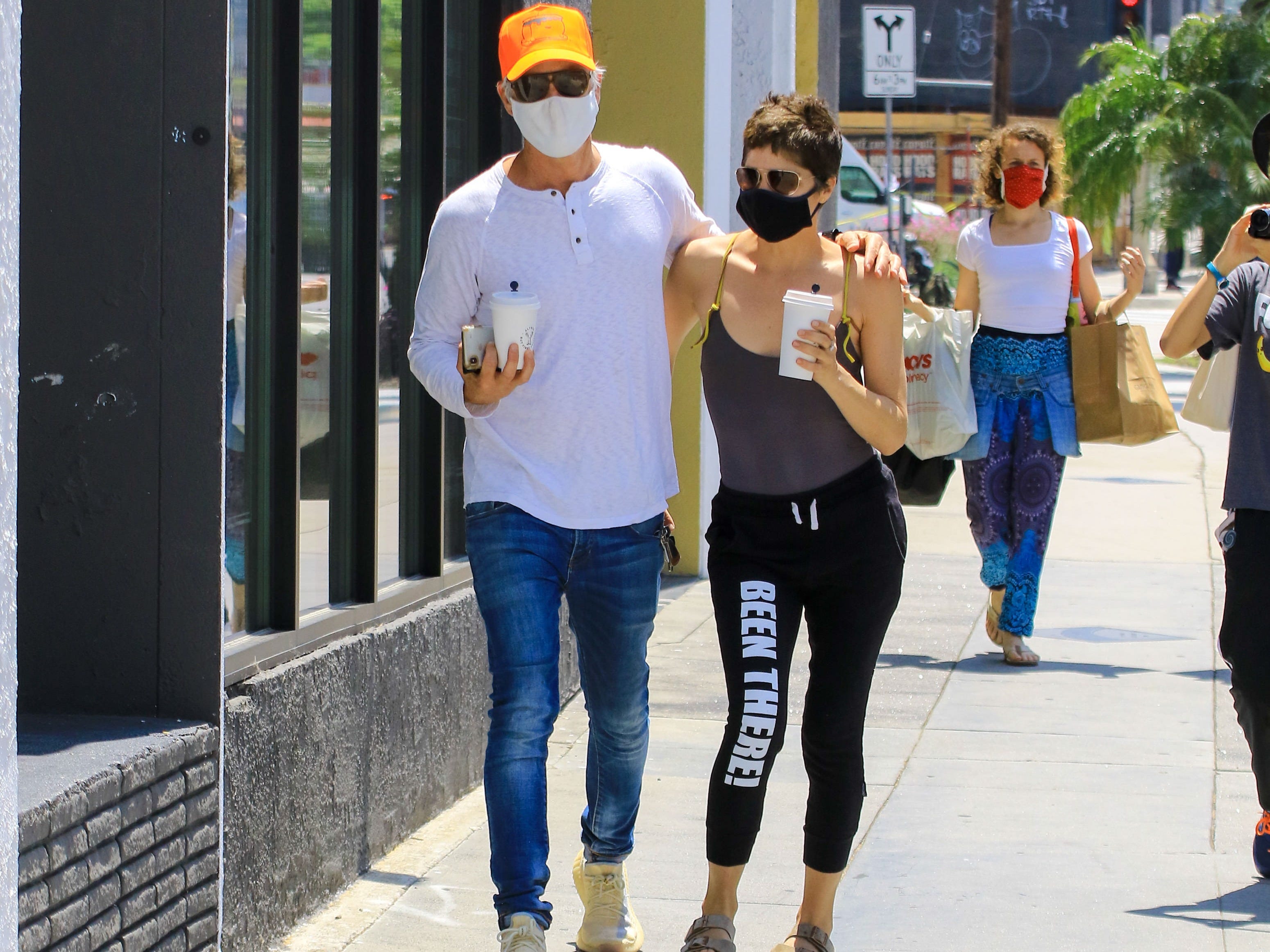 In 2018, Blair revealed she has a multiple sclerosis (MS), an incurable condition that affects the nervous system.

Chris Pine and his girlfriend, Annabelle Wallis, enjoyed an outdoor stroll while covering up with bandanas. 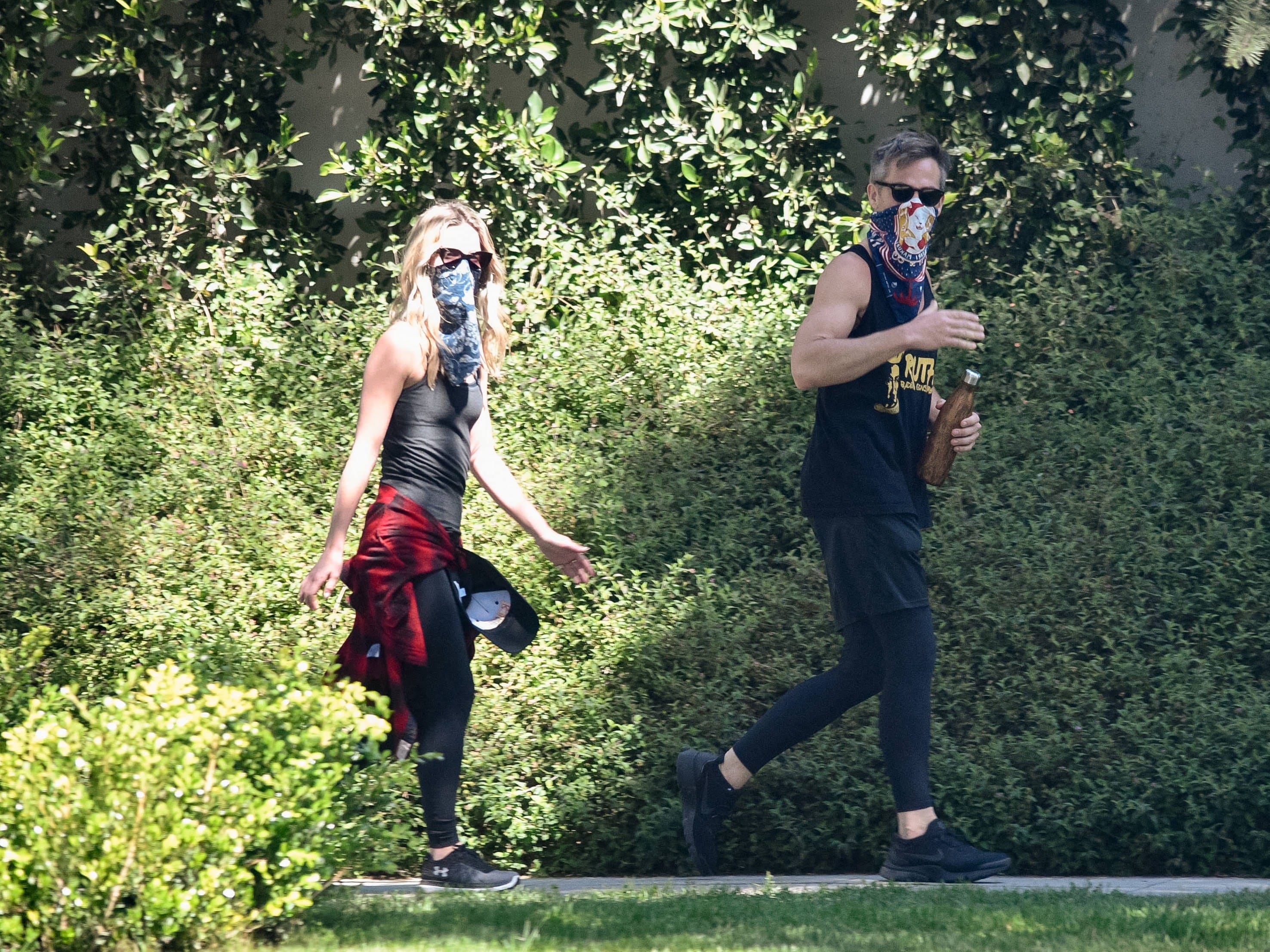 The pair are riding out the lockdown together in Los Angeles. 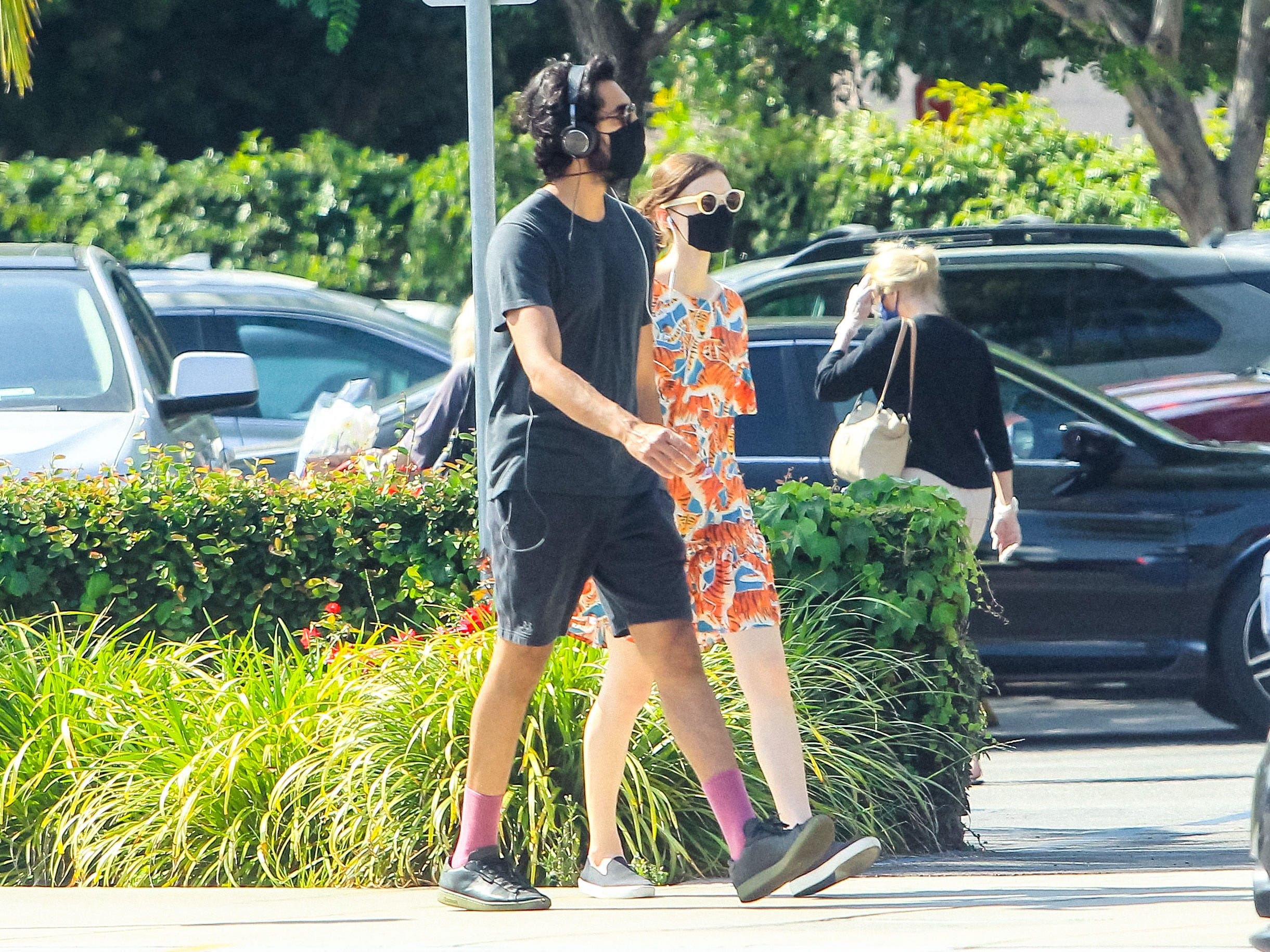 Patel starred in “The Personal History of David Copperfield,” which was released in early 2020. It has a 94% fresh rating on Rotten Tomatoes. 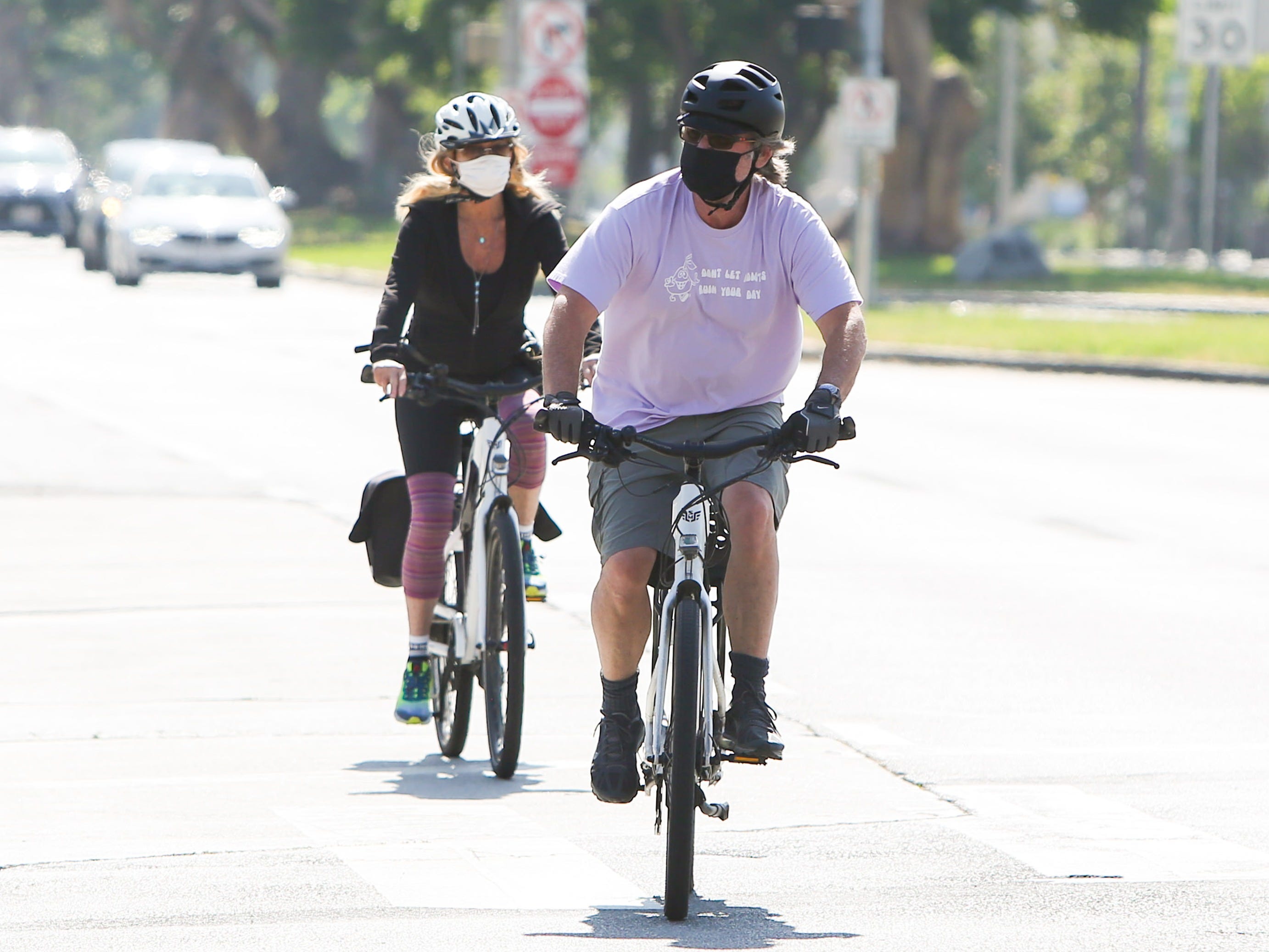 The couple started dating in 1983, but remain unmarried. In 2015, Hawn told Porter magazine, “A lasting relationship isn’t about marriage. It’s about compatibility and communication.”

Hugh Jackman was spotted walking his dog in the SoHo neighbourhood of New York City. 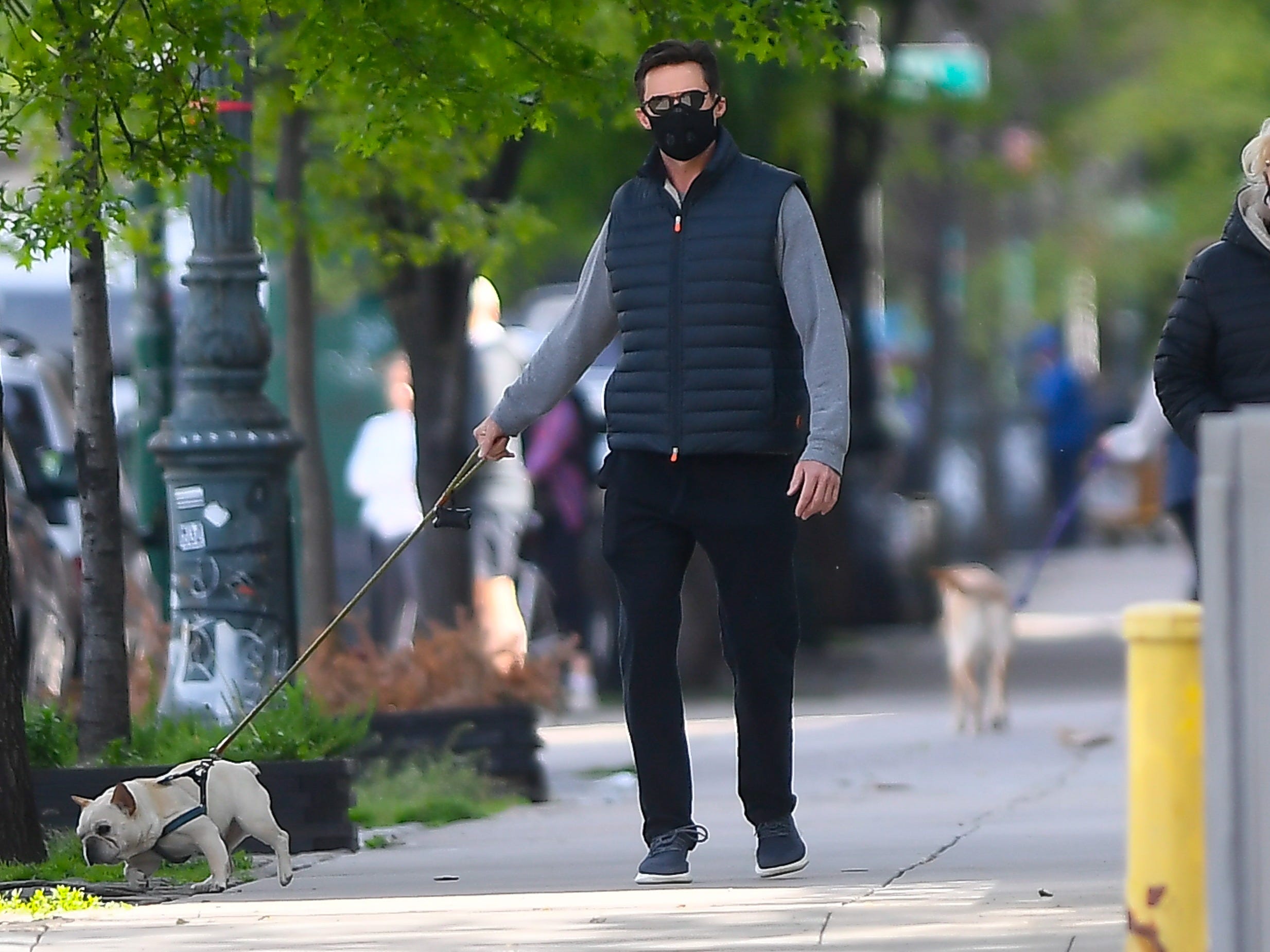 Jackman recently teamed up with Ryan Reynolds for the All In Challenge to raise money for coronavirus relief efforts. The challenge fundraises through sweepstakes and auctions.

Jennifer Garner looked just like any other bike rider as she covered up with a mask and sunglasses. 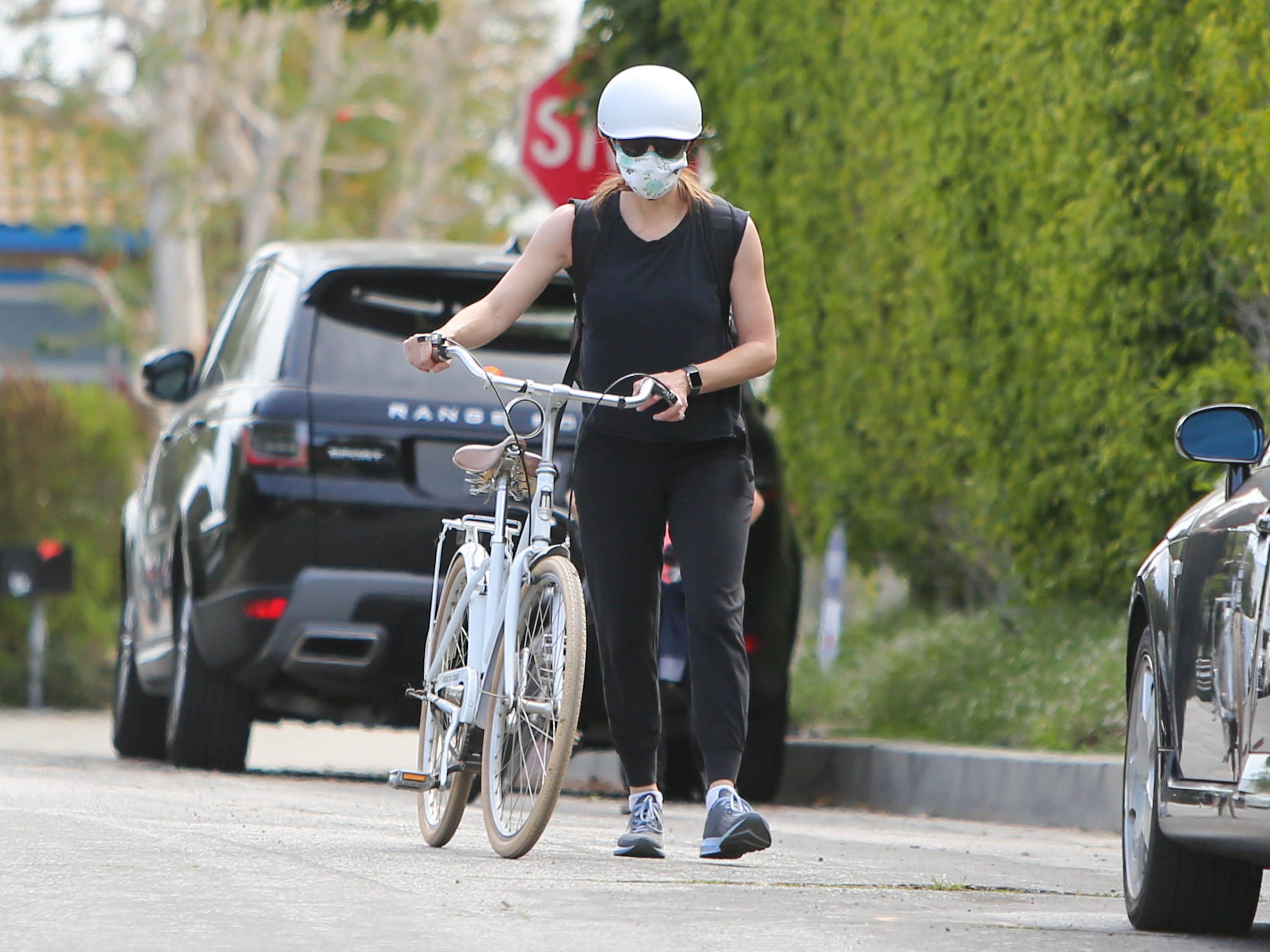 The award-winning actress and mother of three is also the cofounder of organic kid-friendly food company Once Upon a Farm.

“Community” star and former host of “The Soup” Joel McHale kept it safe while running errands. 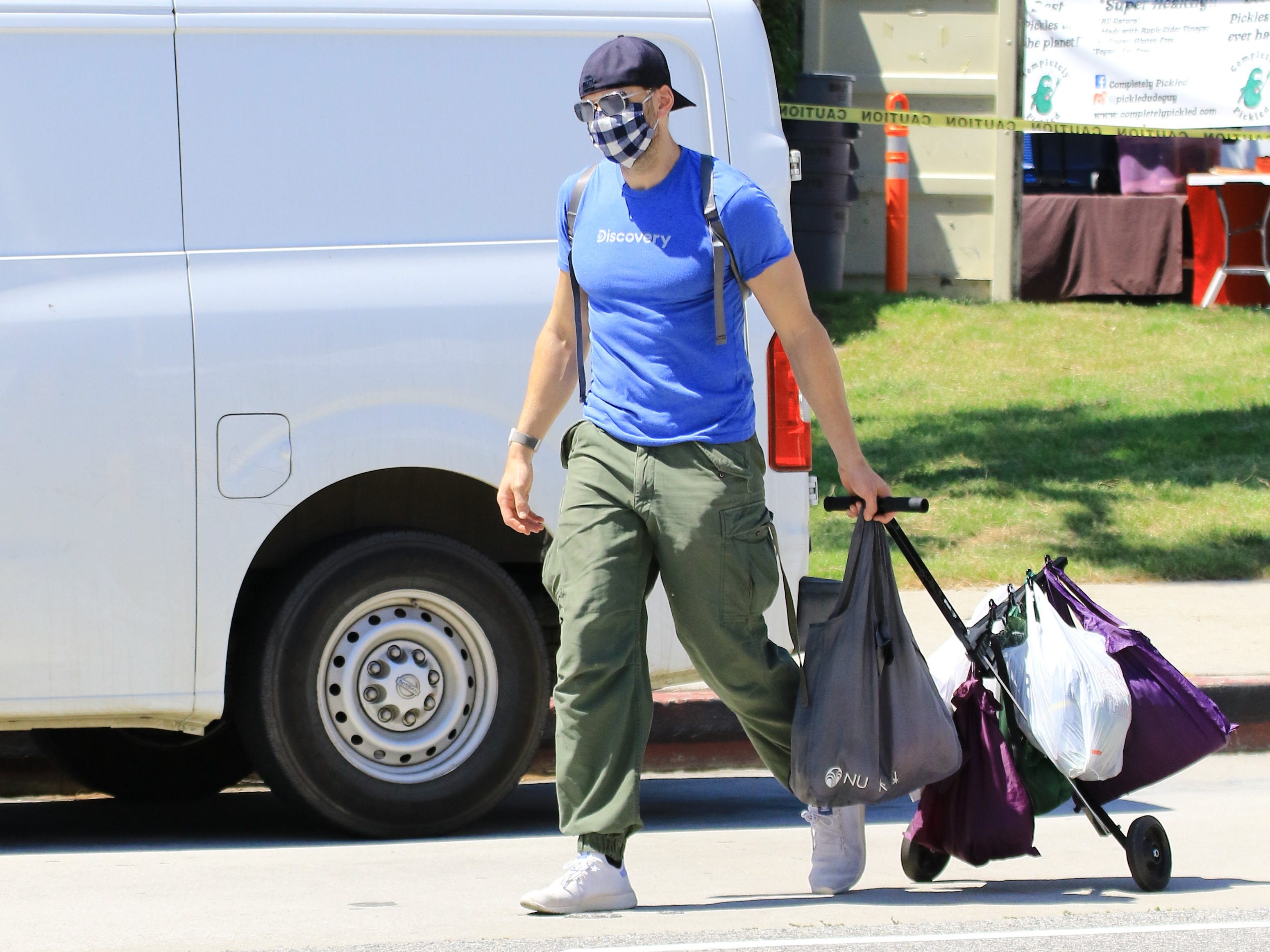 On May 16, CBS reported that McHale hosted a virtual fundraiser to benefit a homeless shelter in Los Angeles.

Lily Collins and her mum, Jill Tavelman, covered up for a walk with her cute pup. 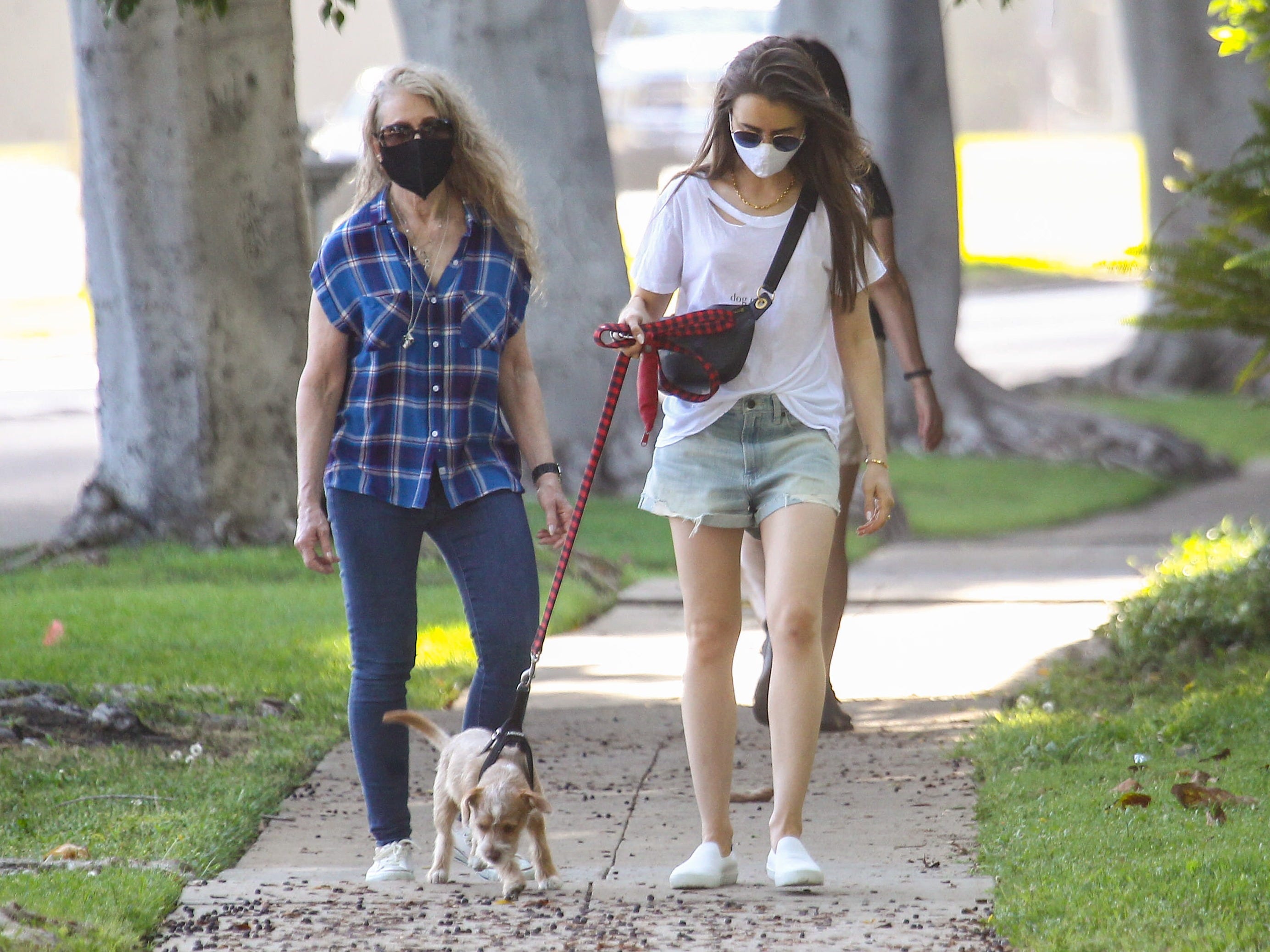 Collins is the daughter of British music legend Phil Collins.

“Pretty Little Liars” star Lucy Hale wore a comfortable outfit and donned a mask for a walk with her dog. 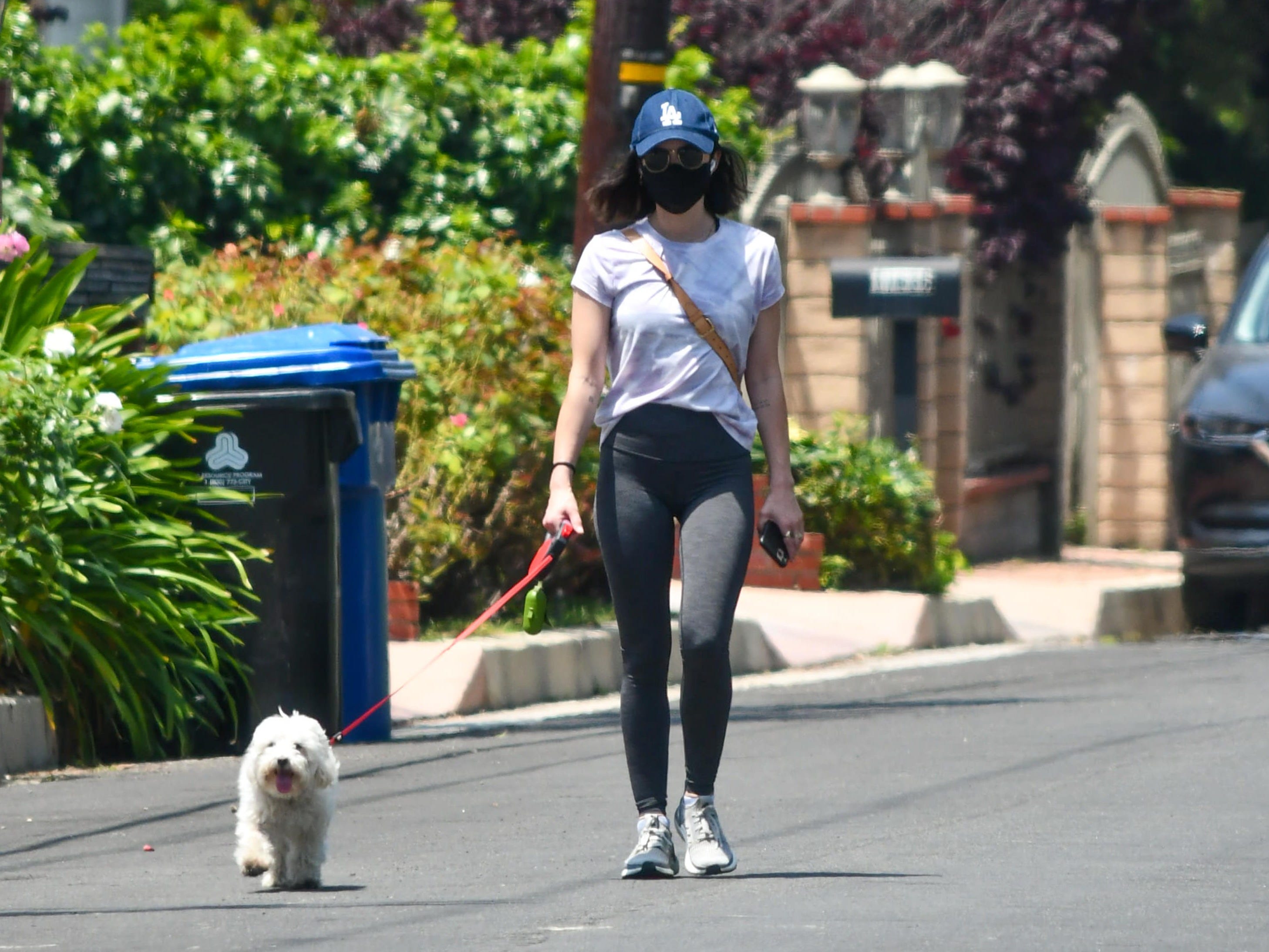 She was spotted in Los Angeles as she walked her dog, Elvis.

Michael Keaton wore a black mask while riding his bike in Los Angeles. 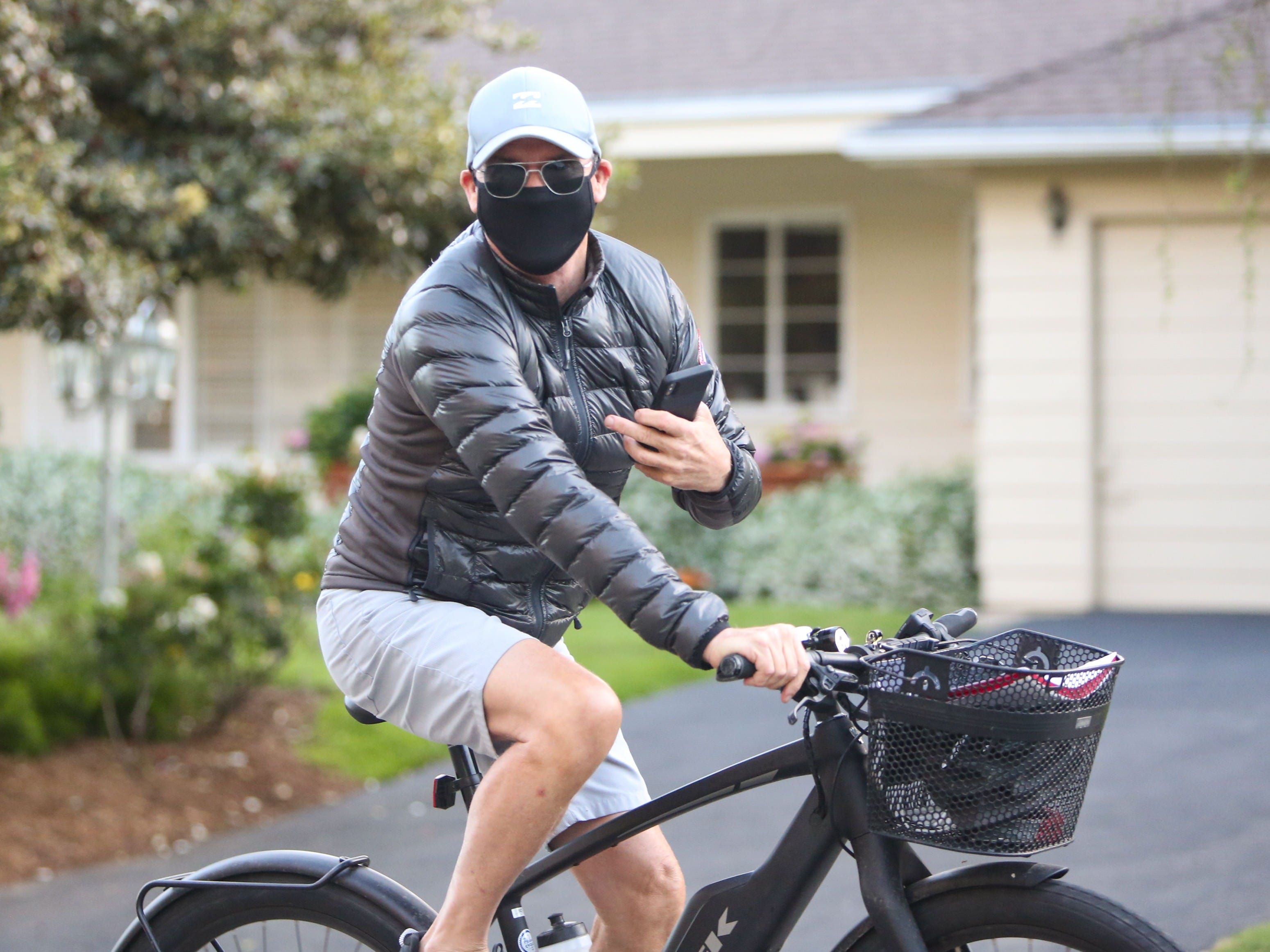 Keaton starred in “Batman” in 1989, and “Batman Returns” in 1992.Robert Pattinson will be the next star to don the Batsuit in “The Batman,” which is set to hit theatres in 2021.

Former “Saturday Night Live” star Molly Shannon wore a casual outfit and mask while out for a bike ride in Los Angeles. 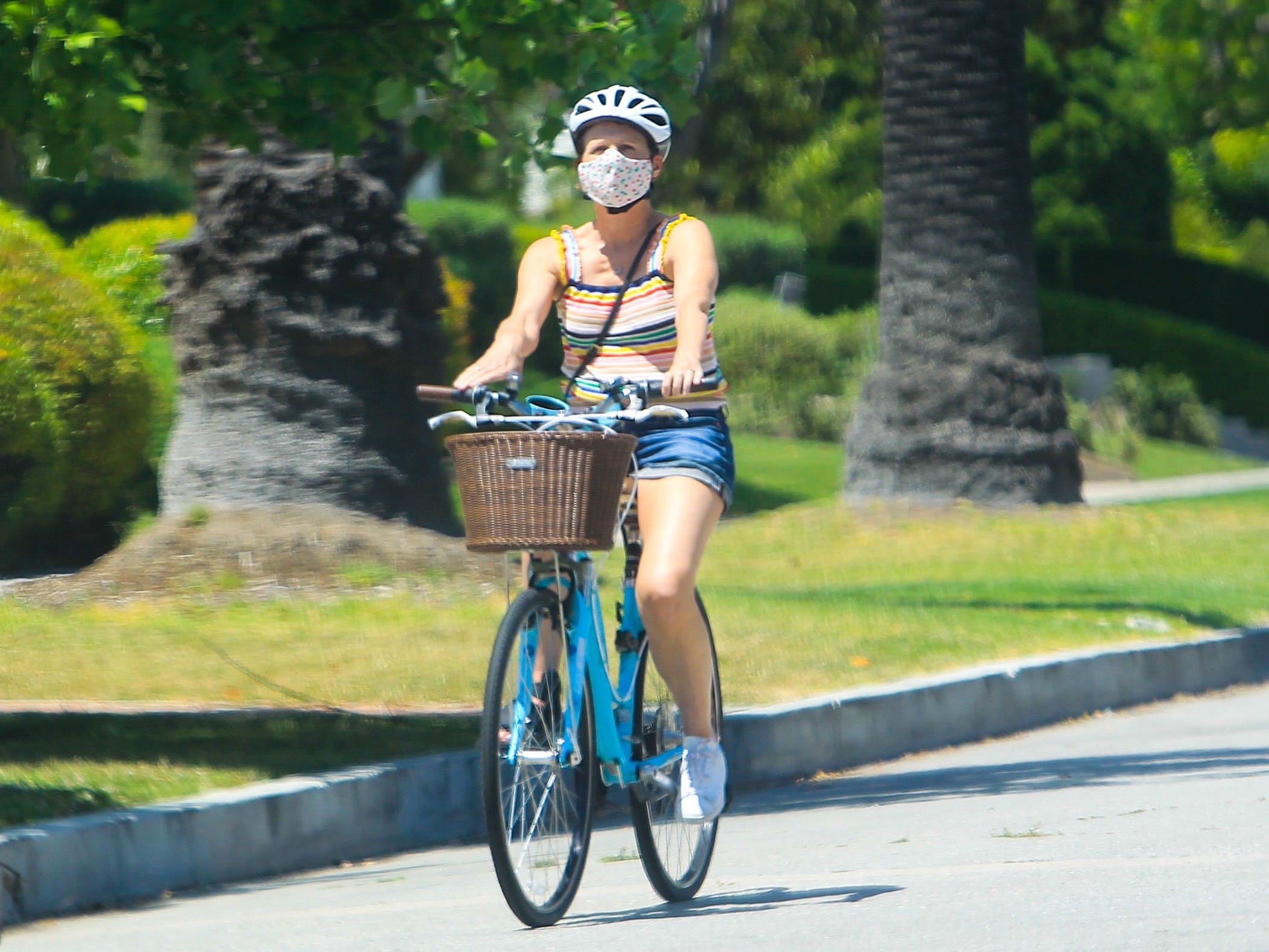 Shannon starred on “Saturday Night Live” from 1995 to 2001. She also starred in the film, “Superstar,” which featured her SNL Catholic schoolgirl character, Mary Katherine Gallagher.

Reality star and fashion mogul Olivia Palermo wore an elegant green coat while taking a walk with her dog. 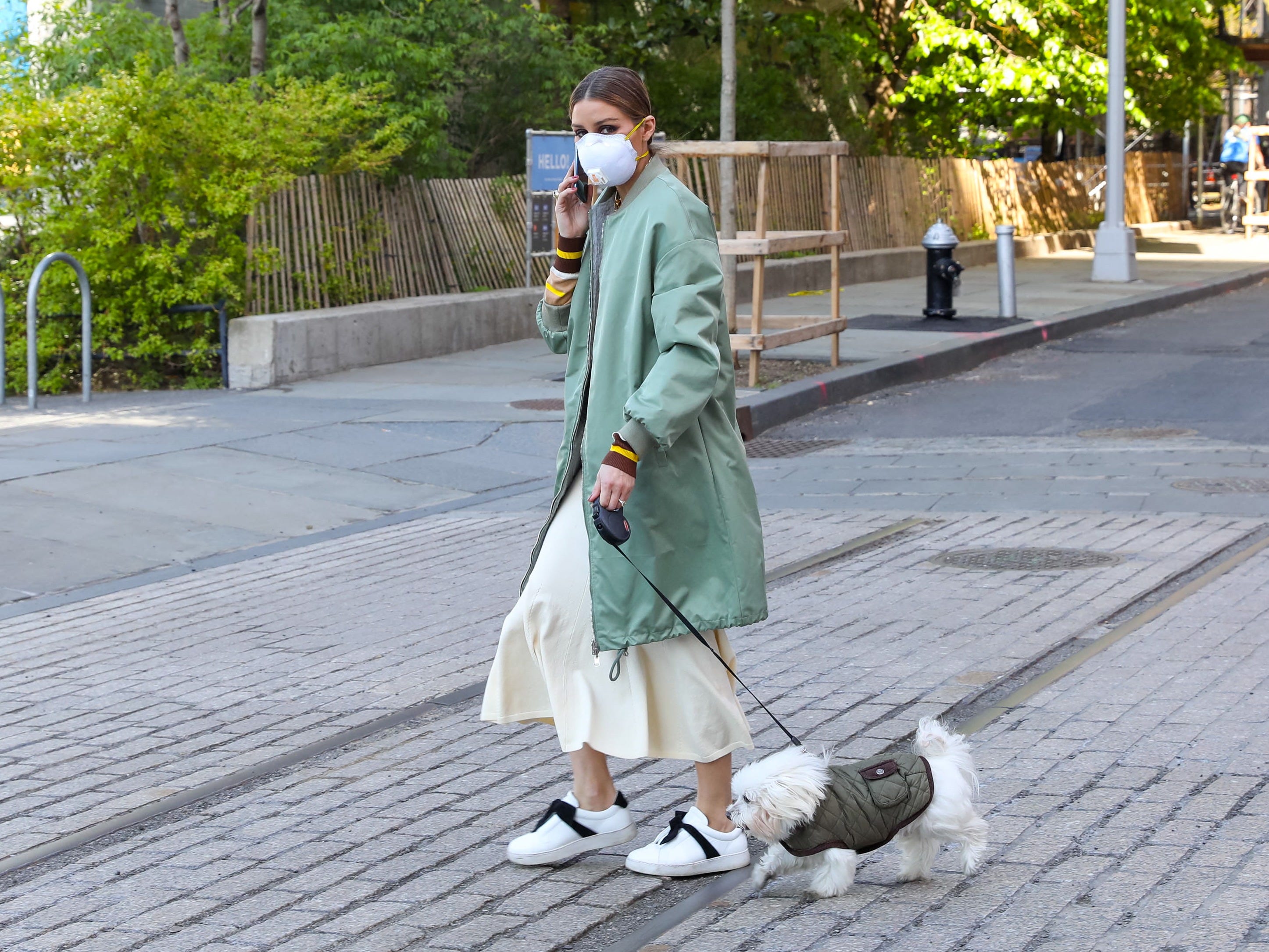 Palermo has worn a series of fashionable looks along with a mask while walking around New York City.