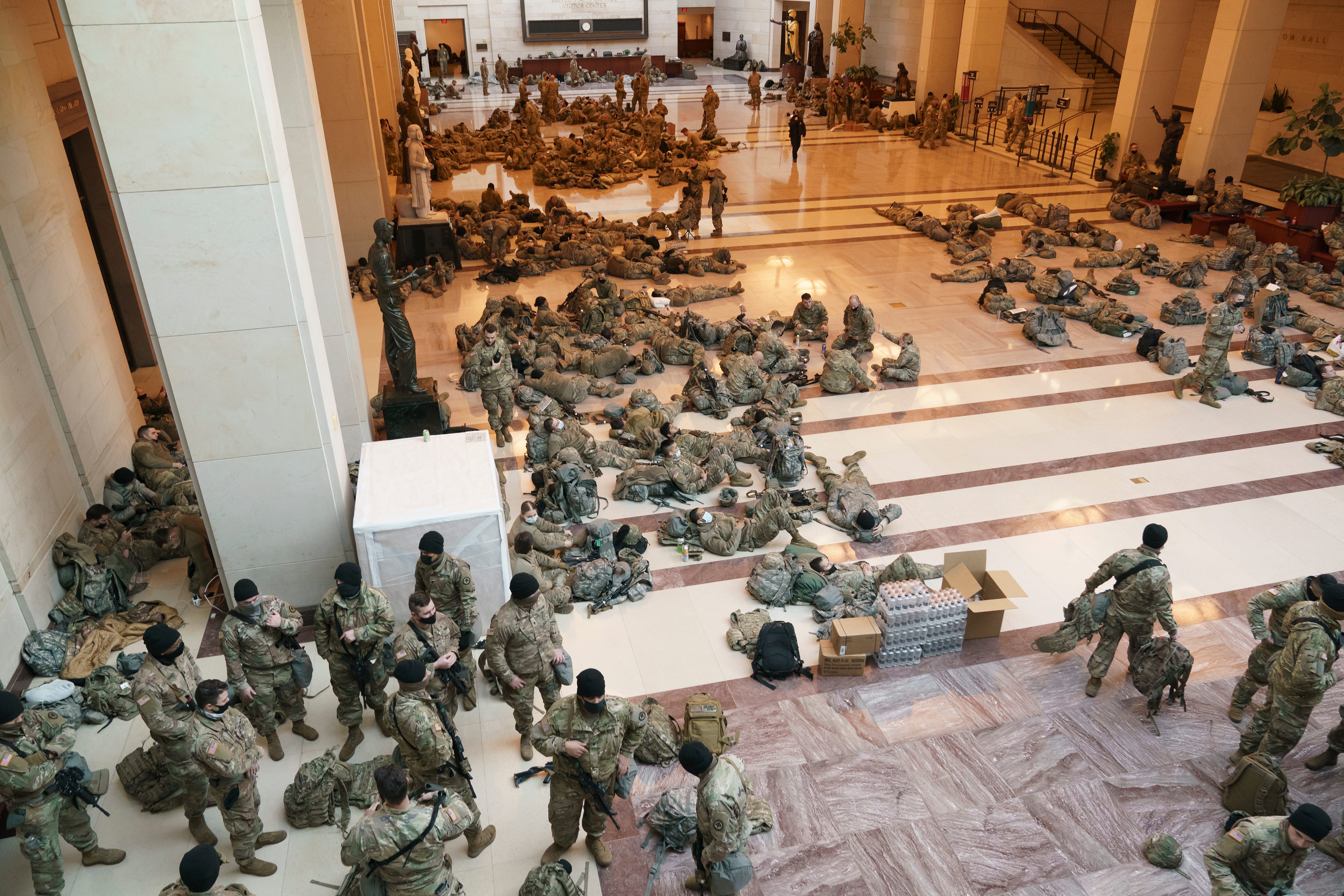 AP Photo/J. Scott ApplewhiteThe National Guard has been deployed to protect the US Capitol in anticipation of more pro-Trump violence.

As the US braces for more pro-Trump extremism in the weeks leading up to President-elect Joe Biden’s inauguration, the Pentagon has approved armed National Guardsmen to be deployed to the US Capitol, Politico reported.

The Department of Justice said Tuesday that it has opened 170 subject files and charged 70 cases in relation to last week’s insurrection at the US Capitol.

Law enforcement faced criticism for an apparent lack of preparedness after pro-Trump rioters who had attended a March for Trump gained control of the building, which should be one of the most secure spaces in the world.

Five people â€” four who attended the march and one Capitol Police Officer â€” have died.

Well this is something I thought I’d never see. National Guard members getting rest in the Capitol, guns by their sides, under the busts of Lincoln and Washington. pic.twitter.com/CVDshN76eY

The day of chaos likely isn’t the end to political violence, as alt-right followers have already pledged organised violence in DC and other states beginning on January 17 and leading through the inauguration on the 20 th.

By Tuesday evening, Guardsmen who secure the Capitol were authorised to carry lethal weapons.

On early Wednesday morning, Capitol staff and reporters arrived to work and found dozens of the Guardsmen resting on the floor of the government building.

Many of them shared surreal photos of the large military presence. 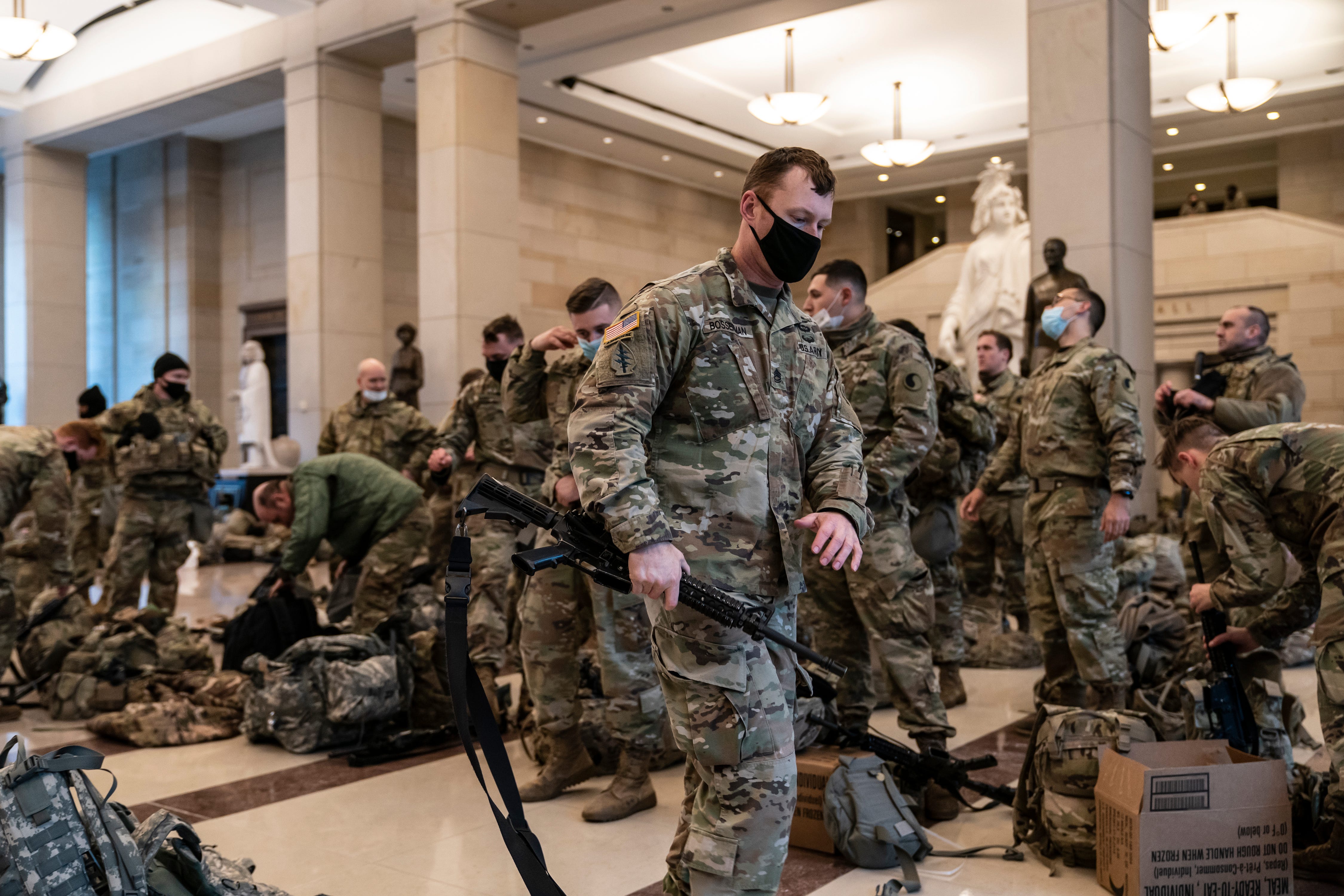 AP Photo/J. Scott ApplewhiteThe sight of armed military patrolling the government building in face masks and fatigues may have been unimaginable in different times.

An increased security presence is expected through the inauguration of President-elect Joe Biden. 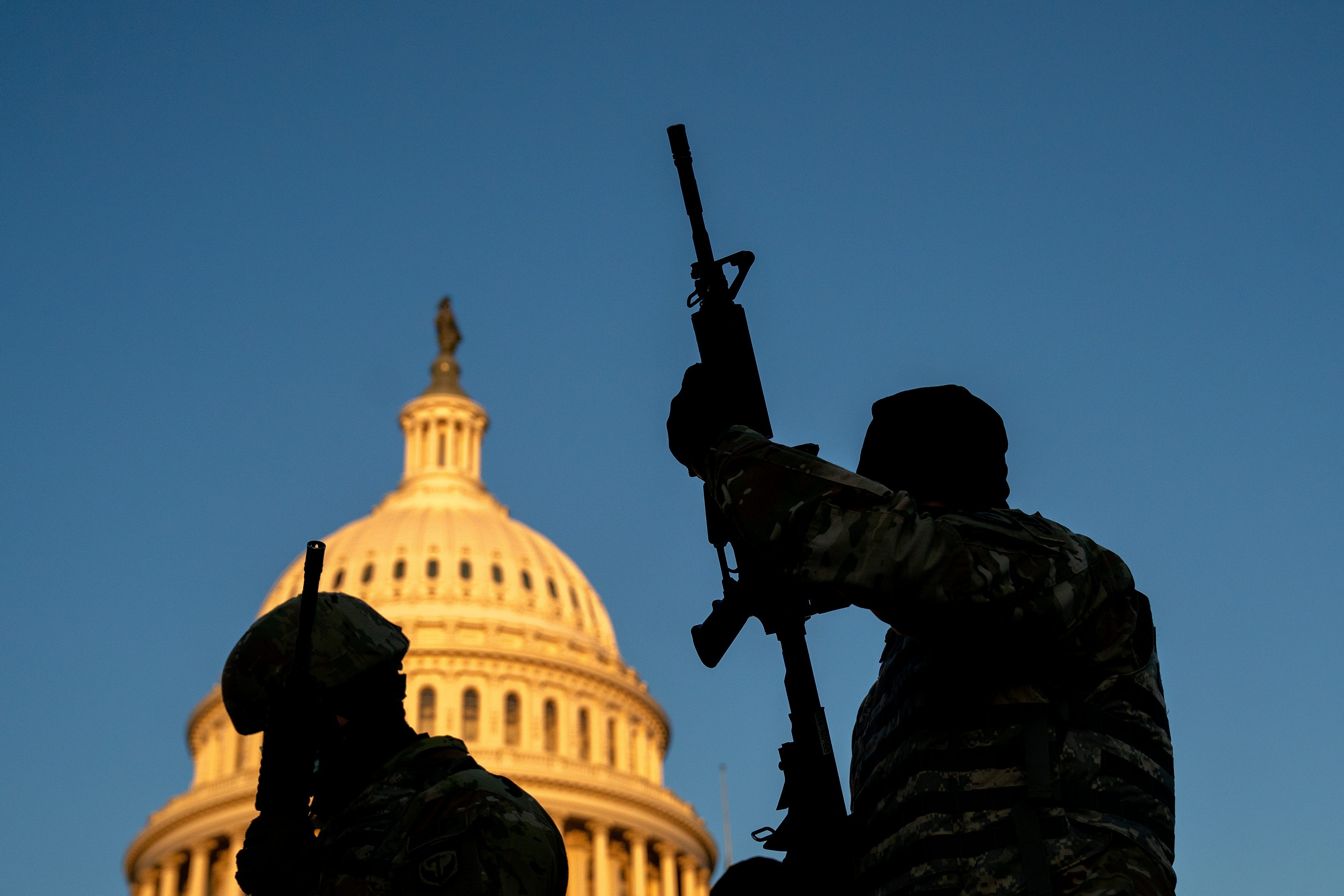 Stefani Reynolds/Getty ImagesLast week’s riots, which Trump has been largely accused of inciting, caused damage to the historic building and lead to thefts of government property.

Some guardsmen tried to get some rest on the floor of the building. 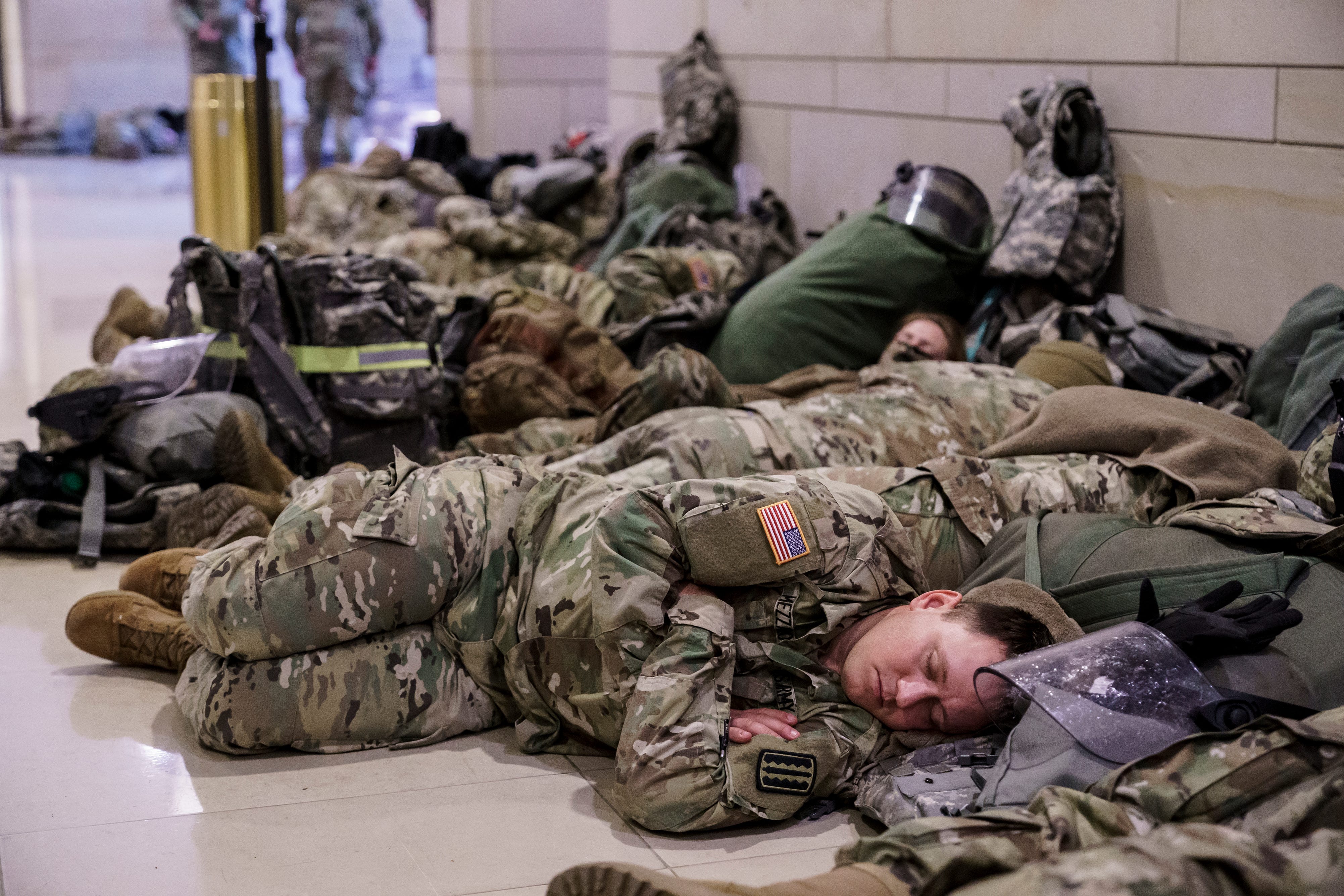 AP Photo/J. Scott ApplewhiteTheir presence comes as the House of Representatives peruses an article of impeachment against President Donald Trump.

Outside of the Capitol, Maryland National Guardsmen carrying rifles secured a perimeter. 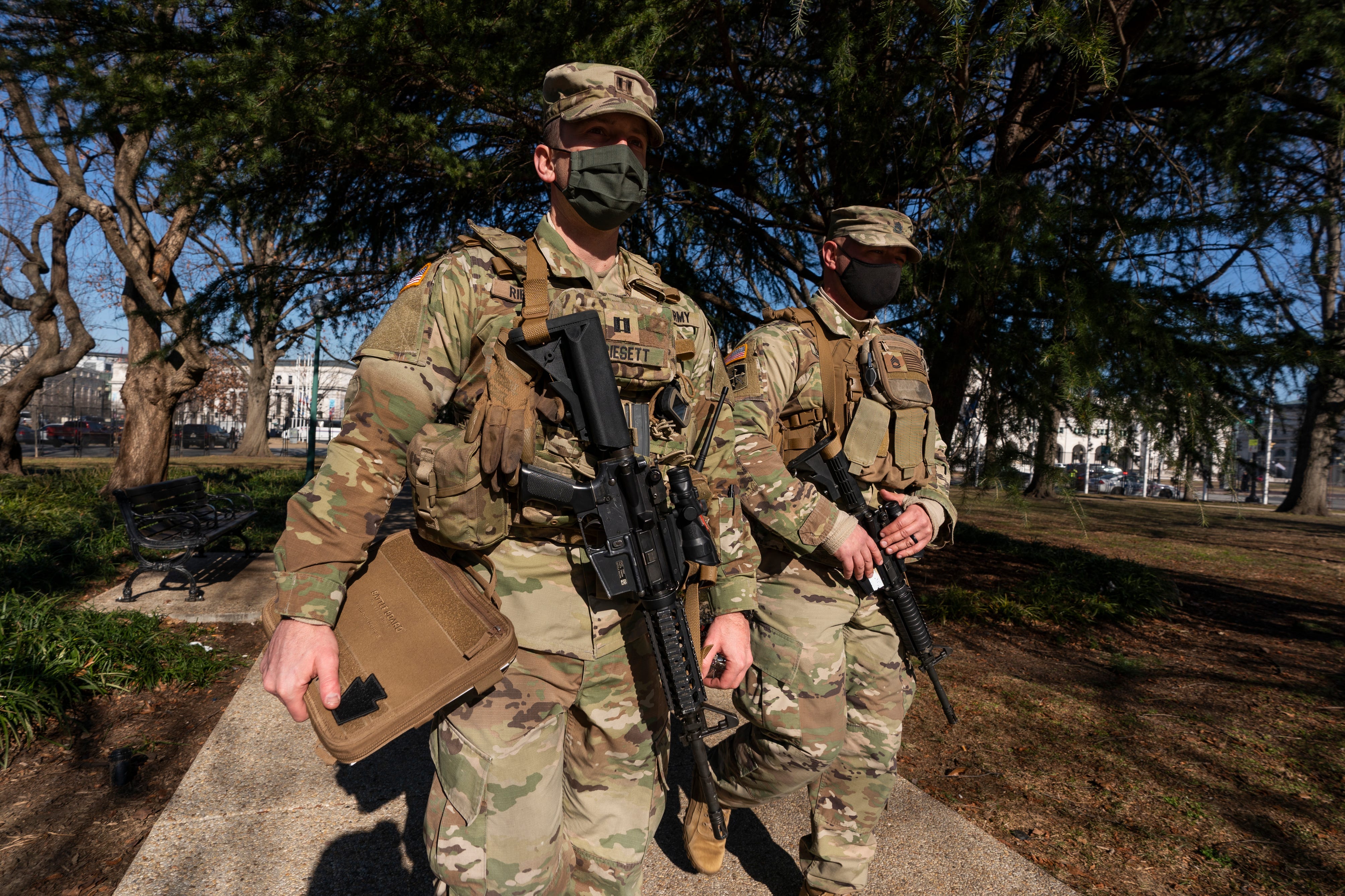 AP Photo/J. Scott ApplewhitePro-Trump extremism is anticipated from January 17 through, at least, the 20th. 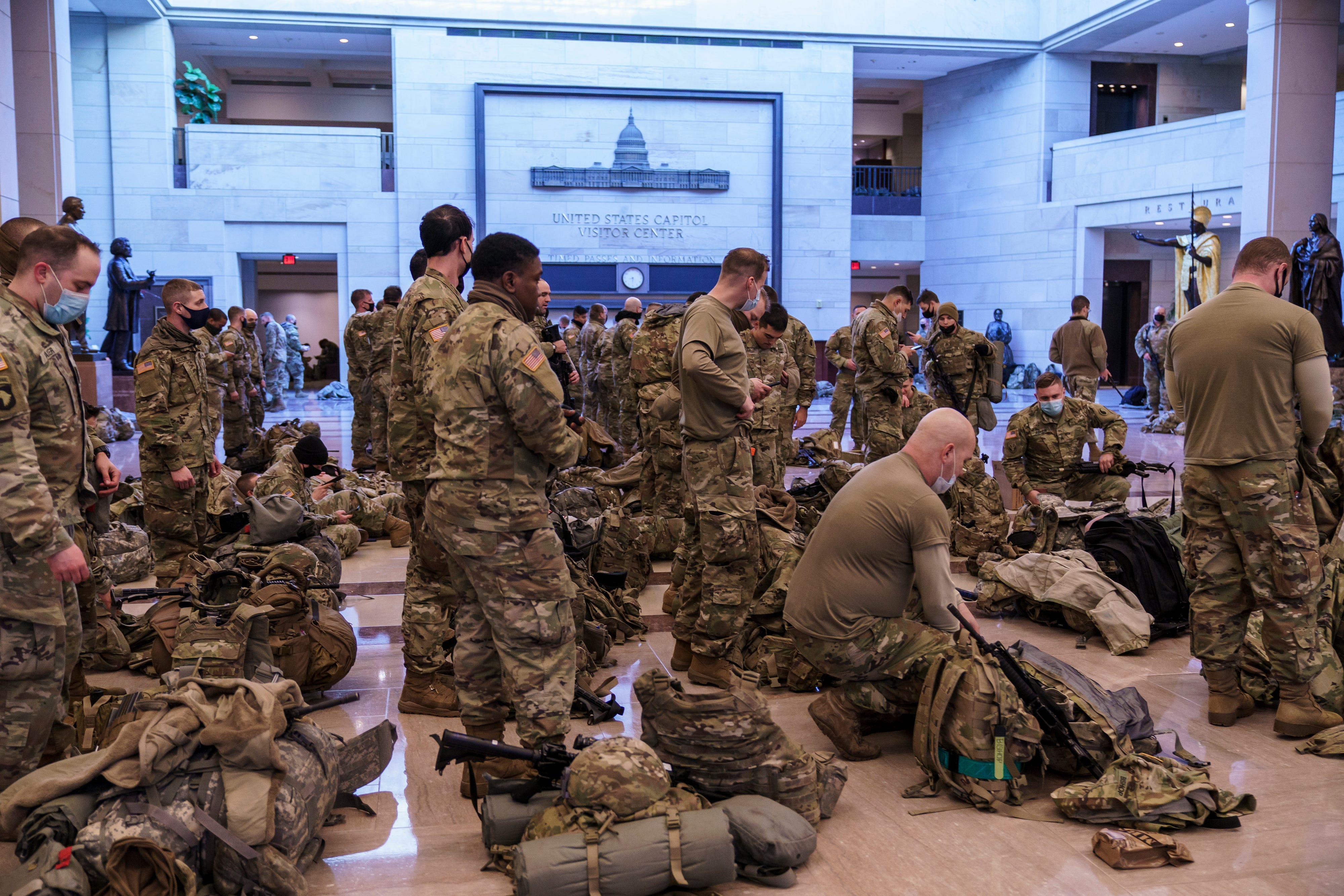 AP Photo/J. Scott ApplewhiteSome members of the guard was deployed to Washington DC ahead of the January 6 riot, but they were unarmed.

The House of Representatives on Wednesday is expected to vote to impeach President Donald Trump. Photo by Stefani Reynolds/Getty ImagesRep. Brian Mast (R-FL) gave members of the National Guard a tour of the U.S. Capitol

Law enforcement around the US, including in DC, are working to ensure the Jan. 6 chaos doesn’t happen again. 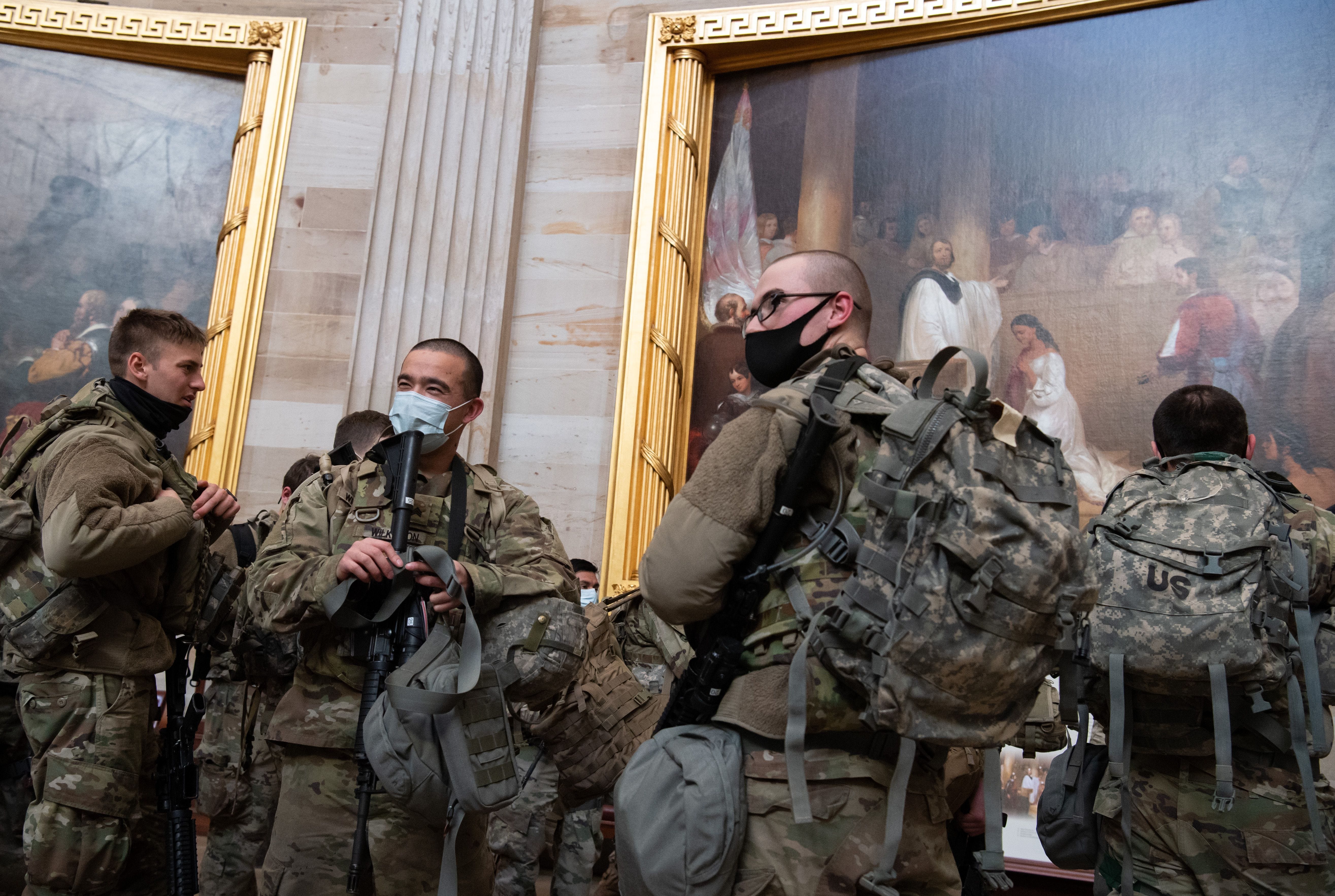 SAUL LOEB/AFP via Getty ImagesIf Trump is impeached for a second time, it will likely enrage some of his more radicalized supporters.