A photographer dressed as all the different types of people in lockdown, from 'the panic buyer' to 'the foodie' 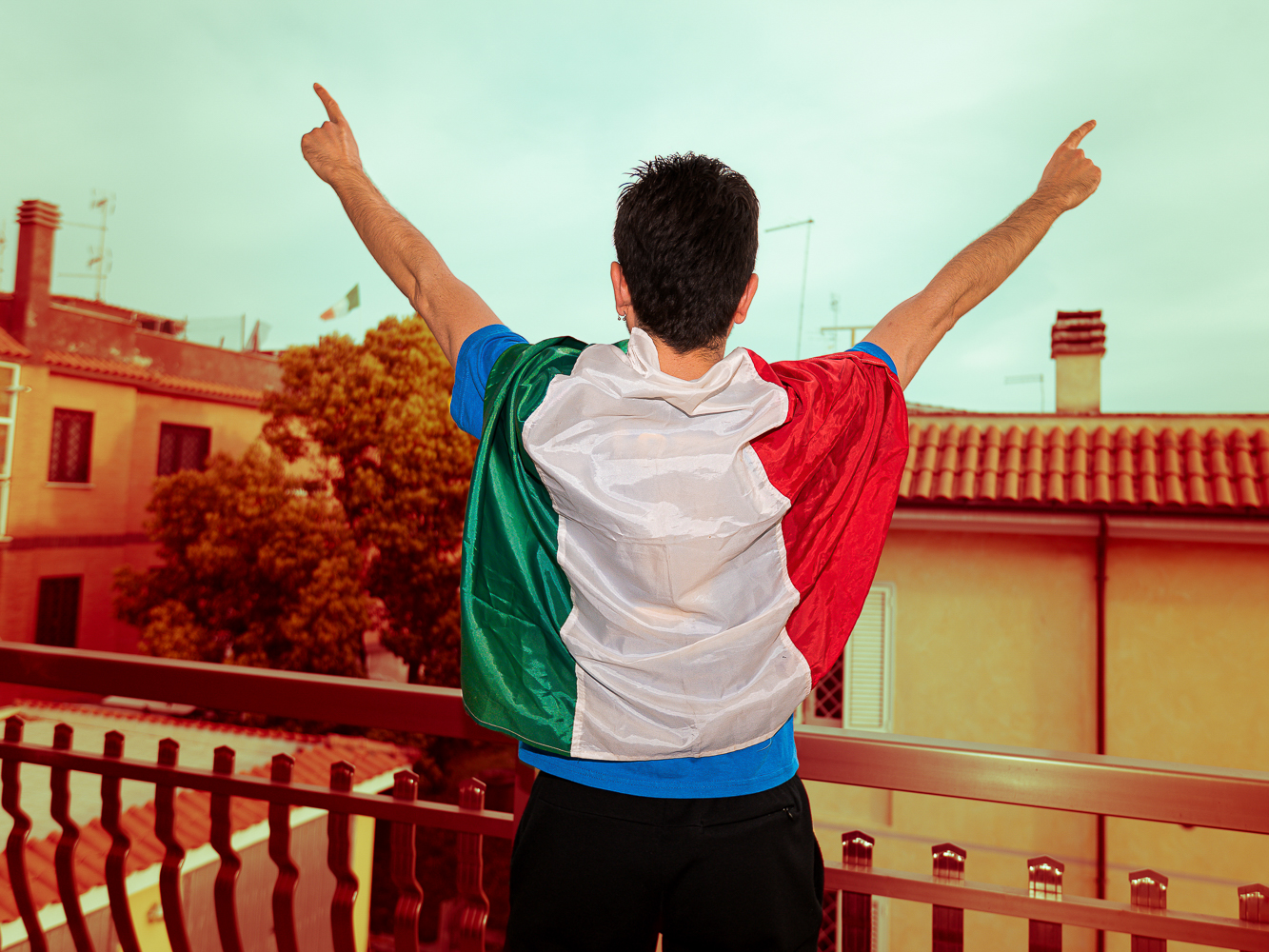 Photographer Danilo D’Auria wants to make people laugh. With a new self-portrait series, he pokes fun at the different types of people in self-isolation during the coronavirus lockdown.

For the series, the Italian photographer dressed as the characters he’s seen on his social media feeds, from “the patriot” waving a flag and cheering for frontline workers to “the panic buyer” who’s hoarding toilet paper. He said it’s not his intention to mock these people – rather to bring a smile during this tough time.

D’Auria spoke with Insider about the series and how he hopes it brings people joy.

Danilo D’Auria is a professional photographer based in Italy, and his new self-portrait series highlights the different types of people in lockdown, like “the tattle tale.” 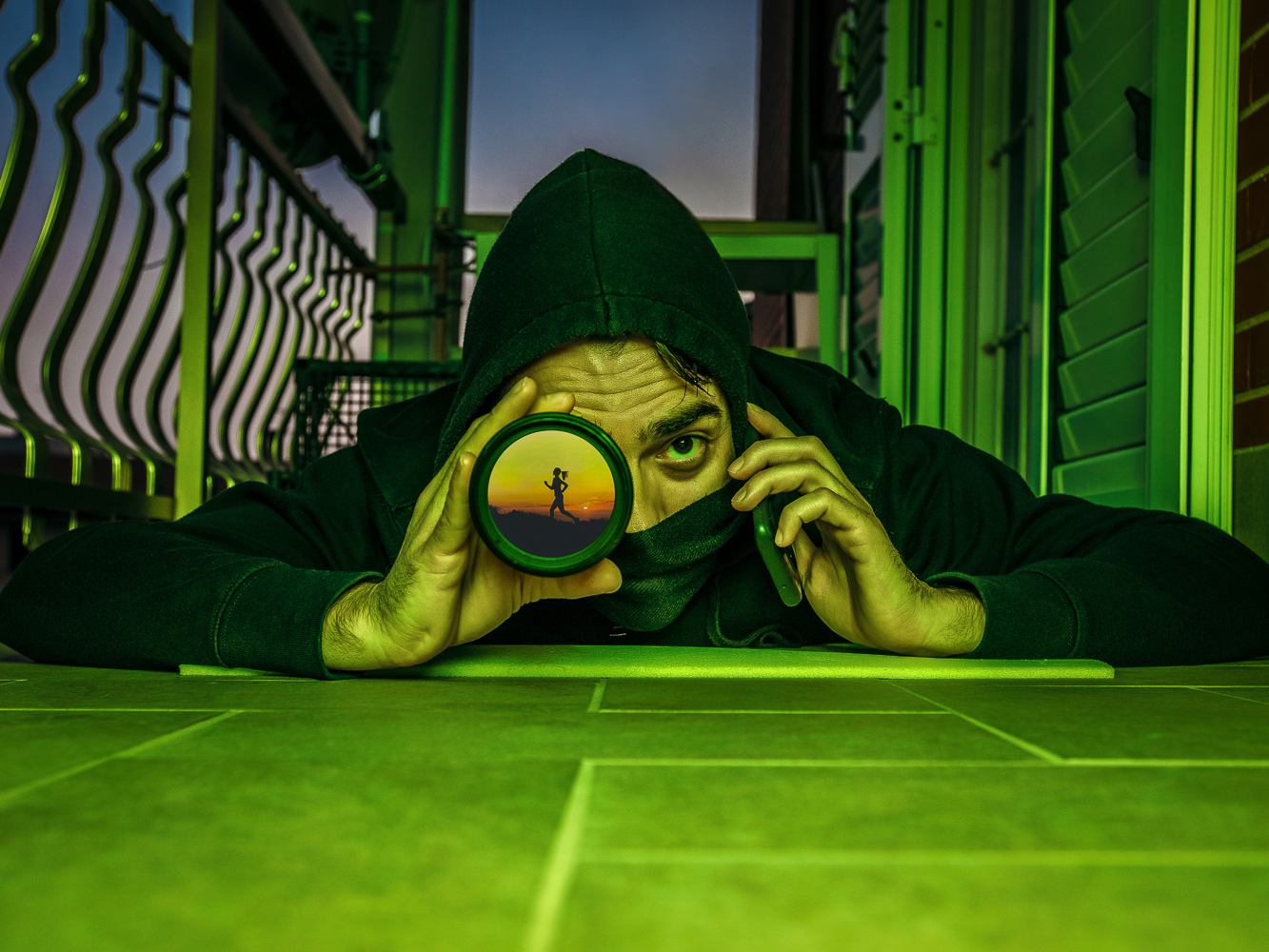 His country has been a hotspot for the virus in Europe. According to the World Health Organisation, Italy had 199,414 confirmed cases of the coronavirus and 26,977 deaths as of April 28.

“We are living a historical and social period that will be illustrated on the books,” D’Auria told Insider. He knew he had to document it somehow, but during the lockdown, D’Auria has struggled to find work and subjects for his photos.

“I had never thought that the solution about the missing subject is to put myself in the photos,” he said.

The photo series is called “Io Resto a Casa” or “I Stay Home.” Through the series, he wanted to take a humorous spin on the lockdown. 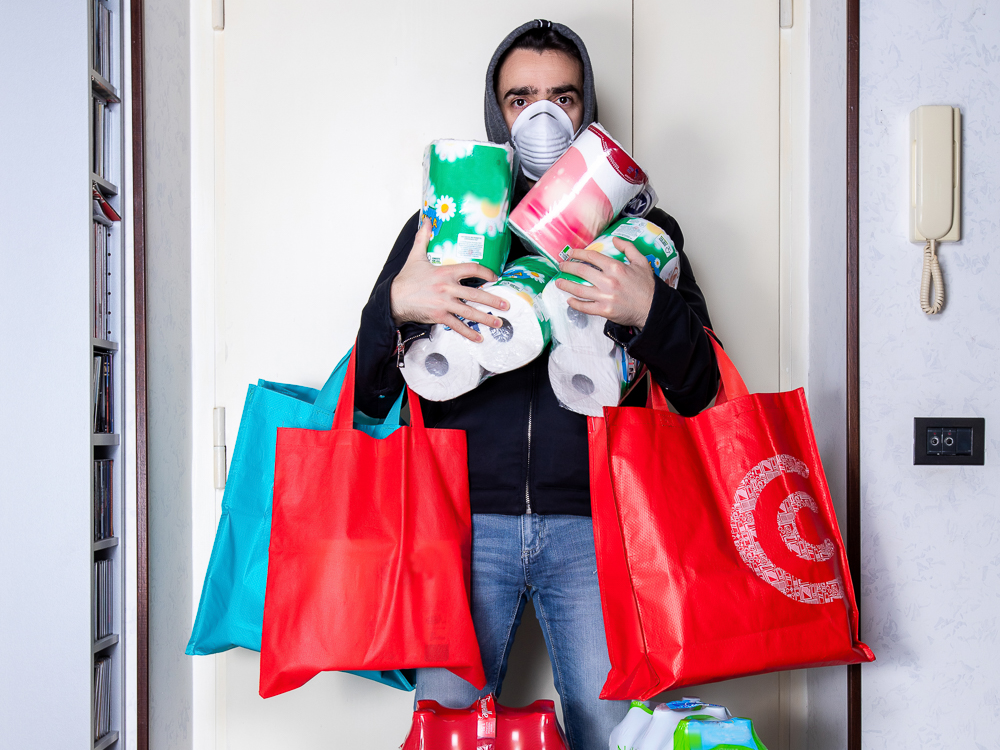 He took inspiration from the project from his social media feeds after the nationwide lockdown was imposed.

“People appeared insane,” he said. “They began to publish photos about their daily activities. These activities were usually very strange. For example, they sang [the] national anthem on the balcony, [and] a crowd of people stormed the supermarket.”

D’Auria said he believes these behaviours were caused both by the stress and isolation.

“Many photographers began to take photos of desolate cities or to show the negative aspect of lockdown. It was very sad, so I decided to give the ironic point of view.” 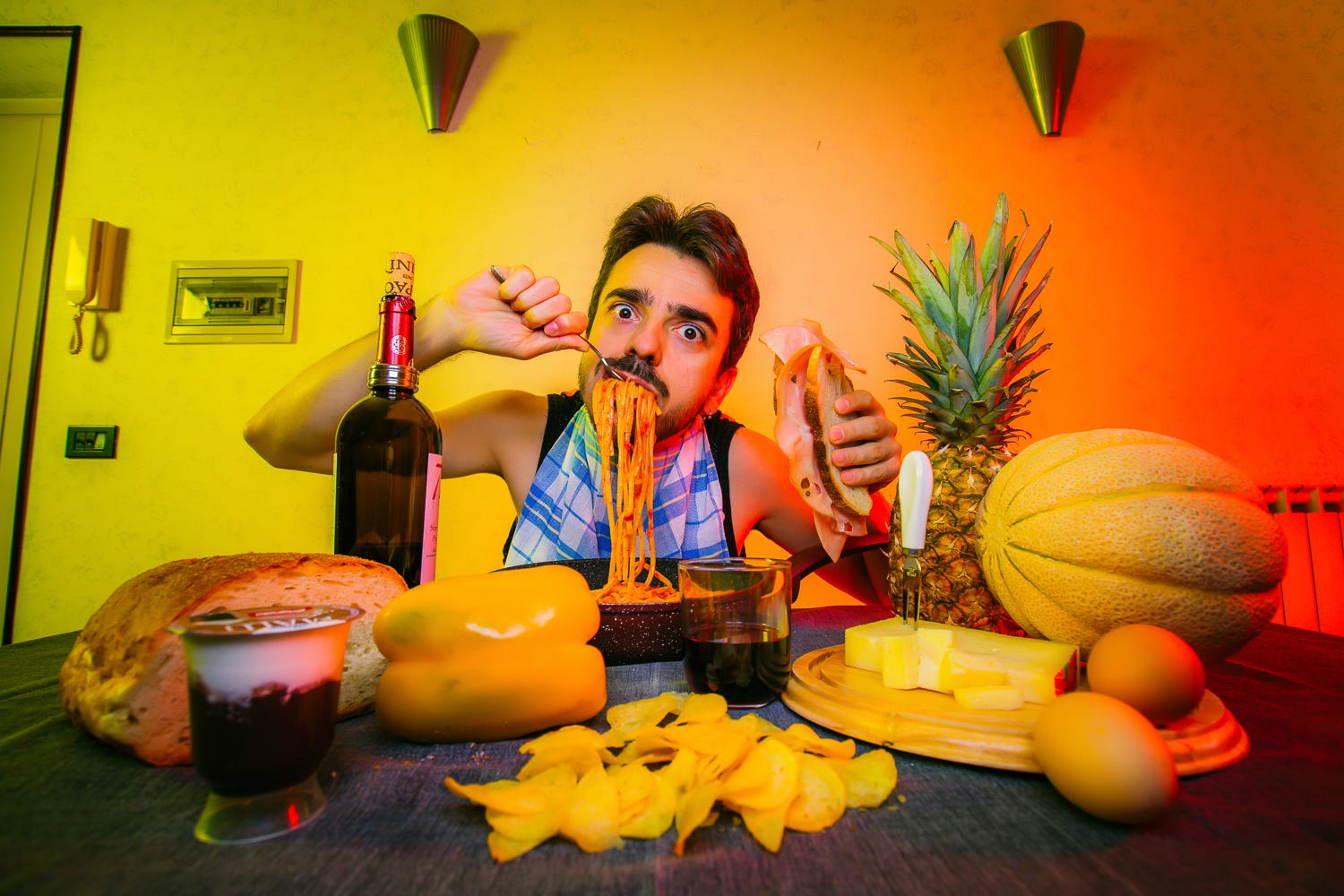 D’Auria wanted to capture the unwavering spirit of the Italian people through a series of exaggerated self-portraits. He titled the photo above “The Foodie.”

“The ironic aspect has been natural for me because I have an ironic personality. I always use irony on myself and to take on difficult moments of life,” D’Auria said. “I think that irony is often lifesaving especially in this time.”

When he gets an idea for a photo, such as giving himself a haircut, D’Auria will draw it in his notebook first. 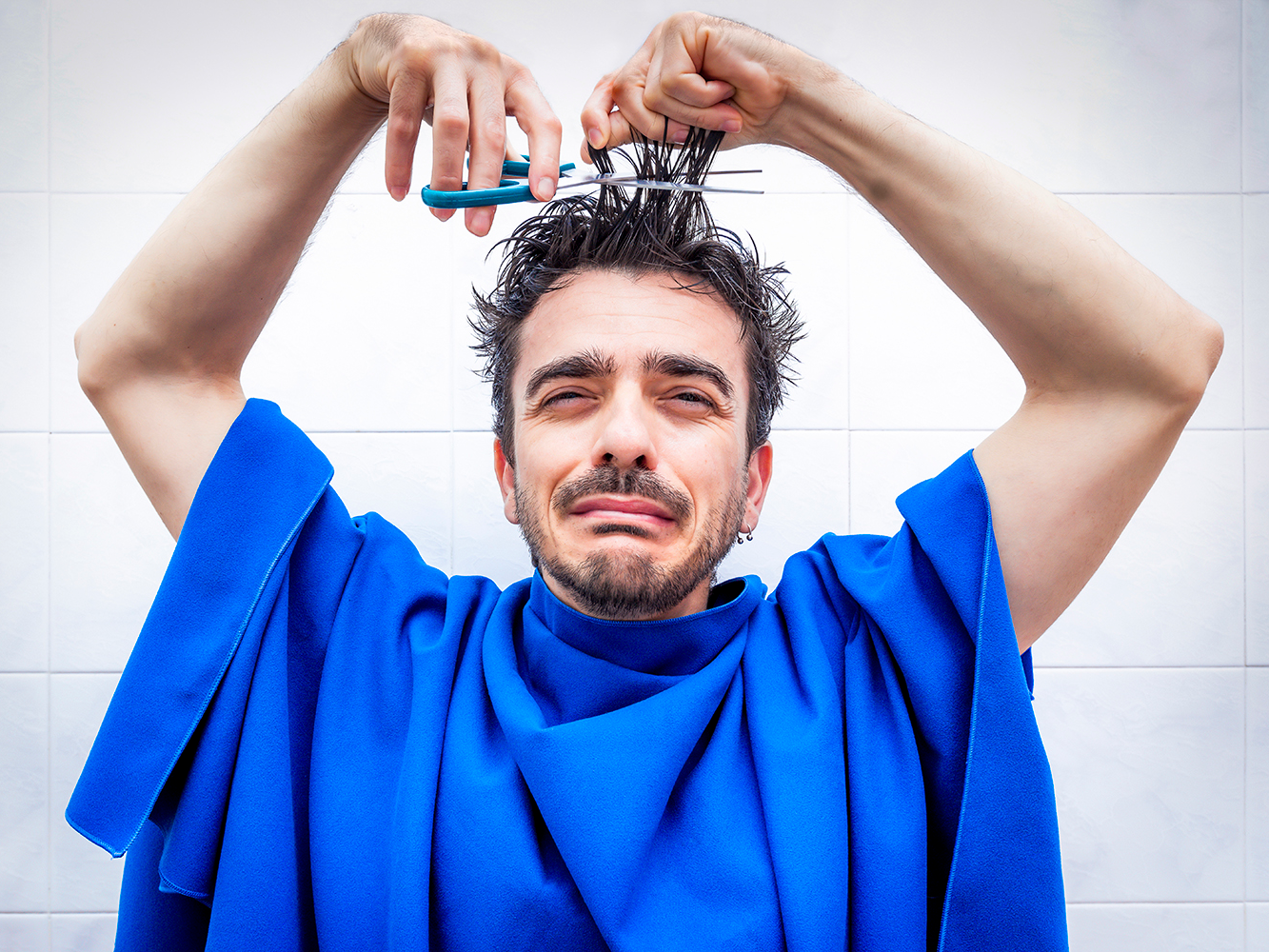 “Every day something happens that gives me a new idea and in consequence a new photo,” D’Auria said.

This portrait is called “The Hairdresser.”

D’Auria takes all his own portraits, such as this one called “The Fitness Guru.” 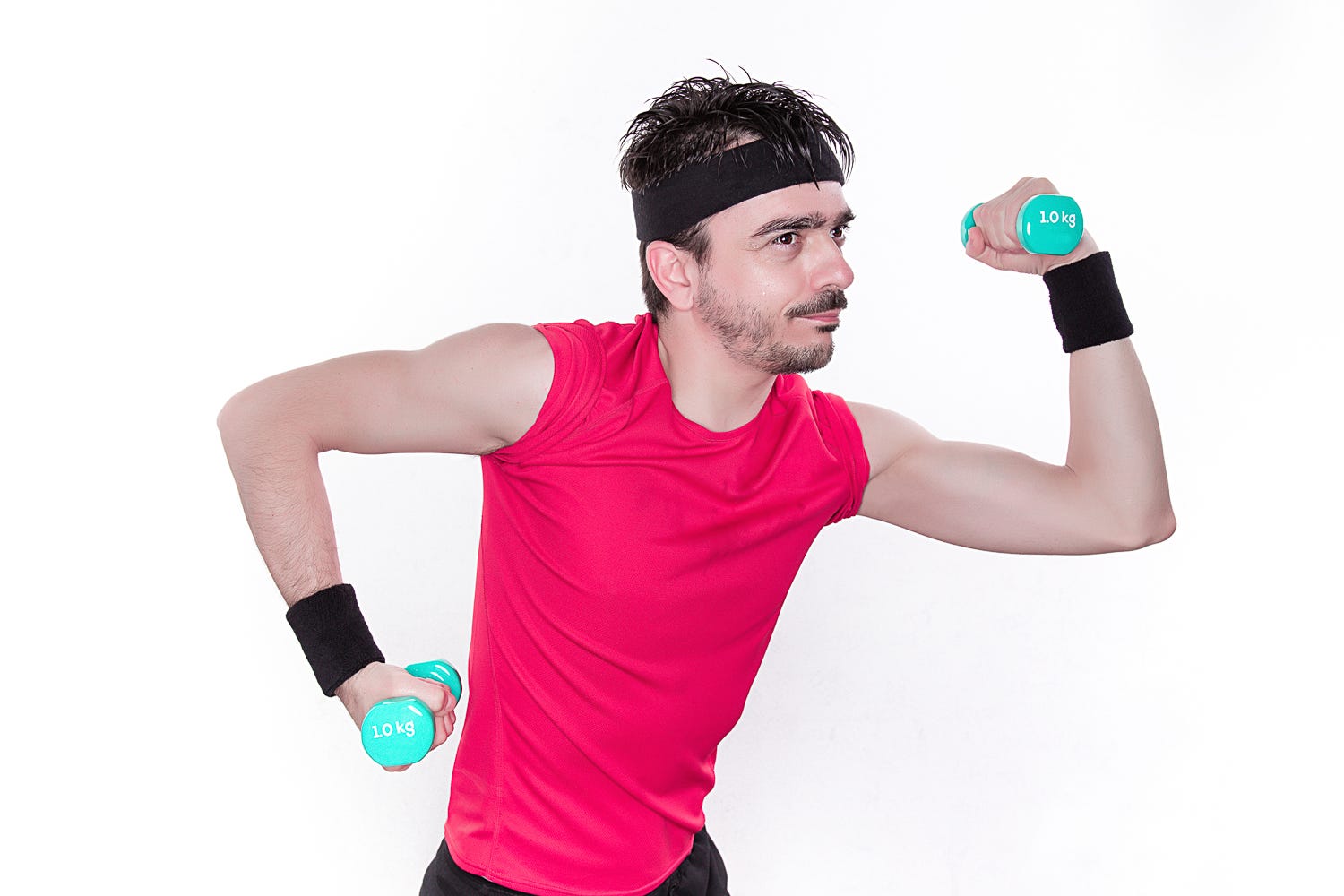 “All the photos are self-portraits. I think and do everything personally,” D’Auria said.

The more complicated the idea, the more time it takes D’Auria to get the perfect shot. 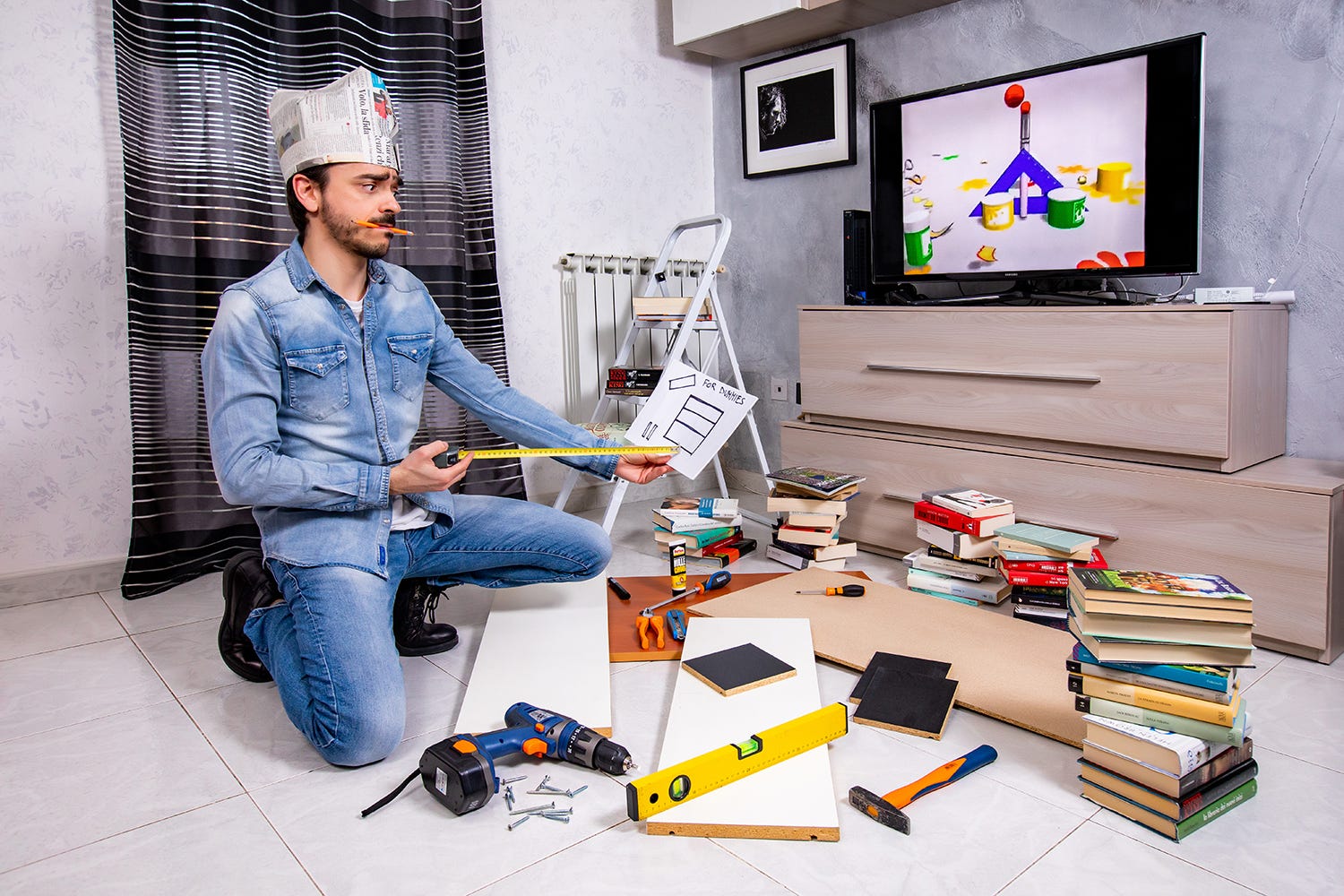 D’Auria will set up a tripod with his camera to take the portrait. He usually takes several photos and chooses the one that best illustrates his idea.

“It is not always easy to convert the idea into a photo,” he said.

For the photos, D’Auria wears clothes and uses props that he finds around his home. 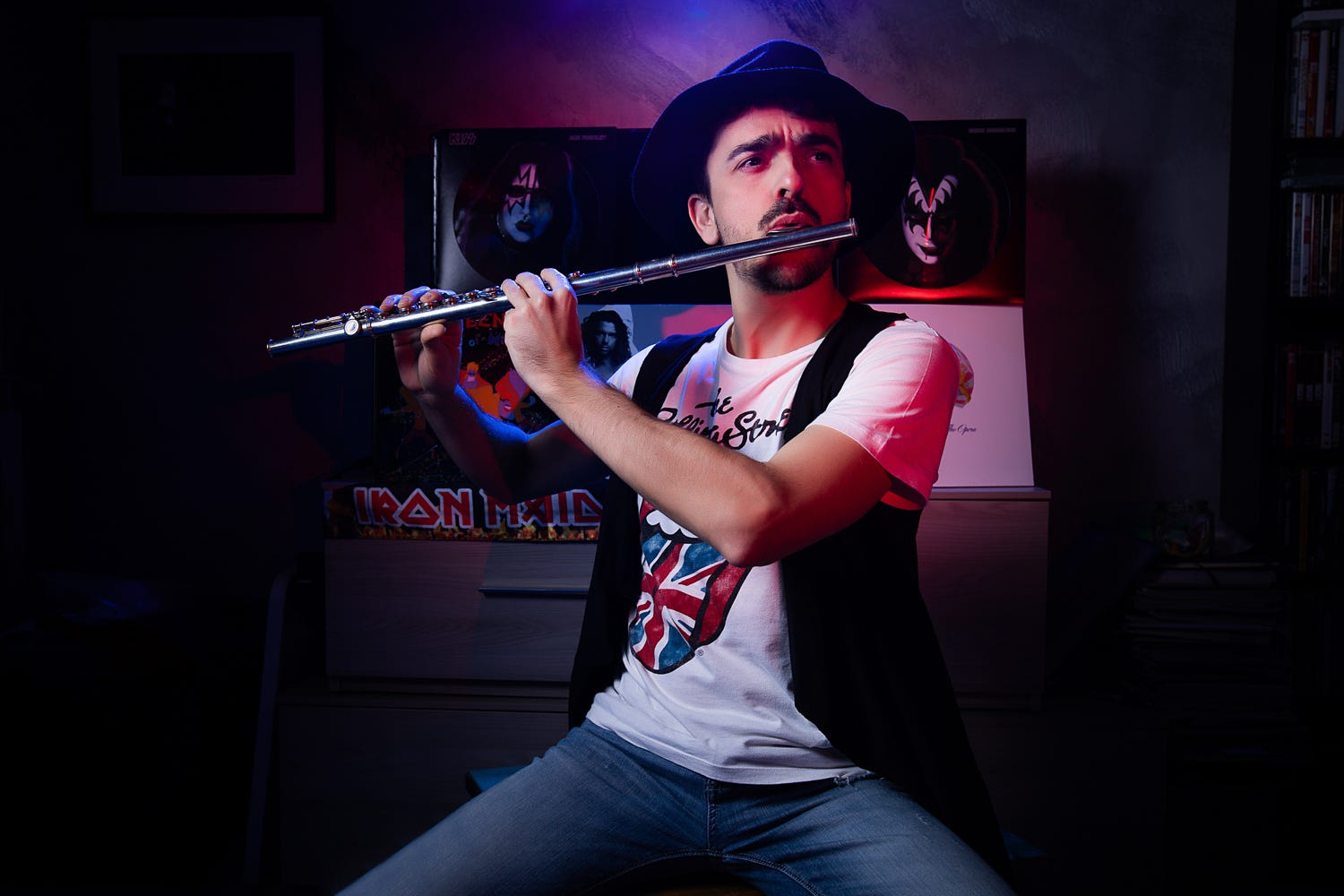 Much of his equipment is in his now-closed studio, so he’s had to learn to adapt, using only what he has at home, he said.

While people were initially hesitant about the series, D’Auria said, they now love his photos. 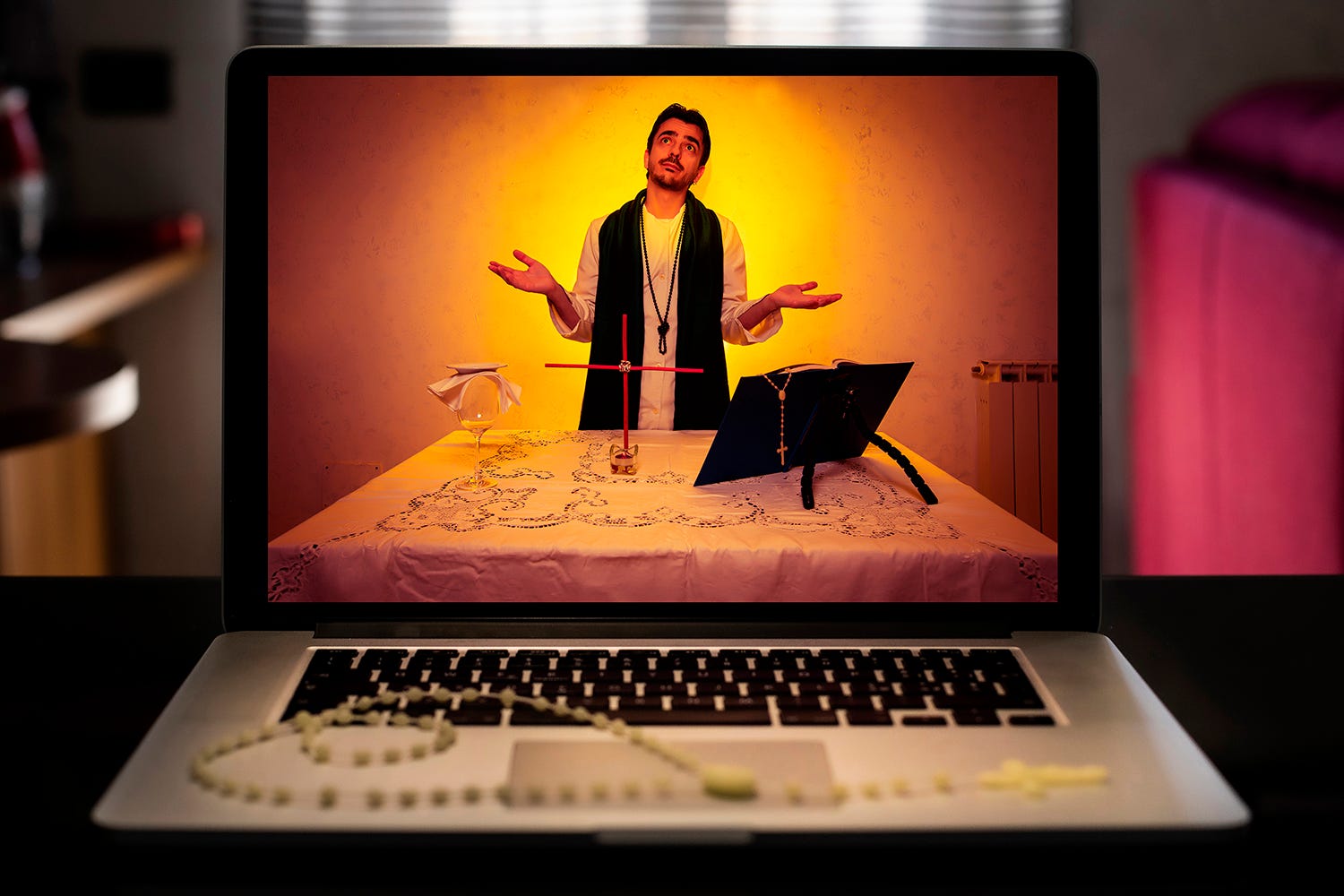 If he doesn’t publish a daily photo on social media, some of his followers will message him. “They write to me to know if all is OK,” he said.

One of his fans suggested he turn the series into either a book or museum exhibition.

D’Auria lampoons topics he sees on social media. In this photo, a conspiracy theorist presents possible sources of the virus. D’Auria used conspiracy theories he’d seen circulating online, including how the virus was made in China and how it was caused by 5G cellular networks. 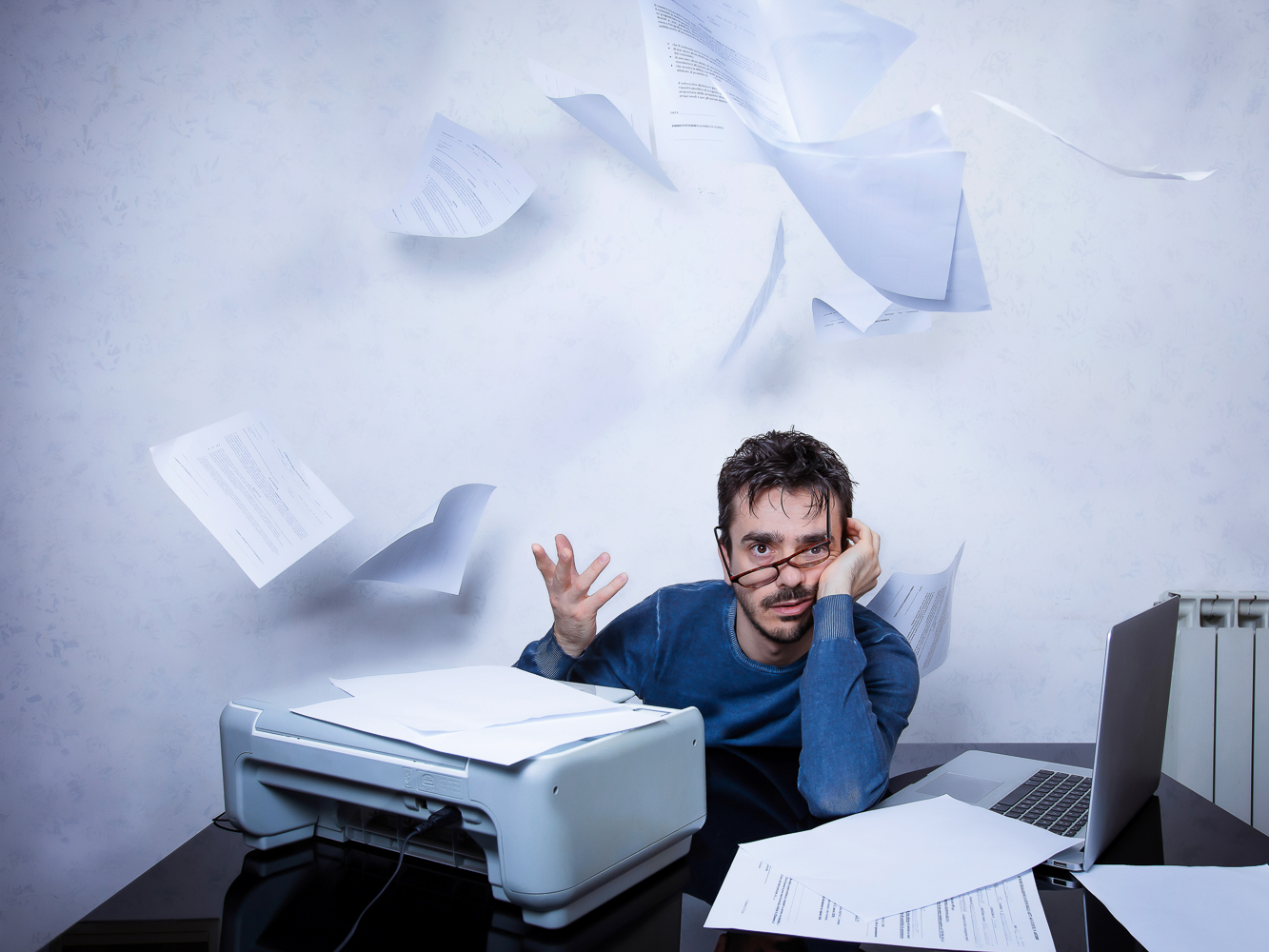 In Italy, people have to receive a self-certification document in order to go out in public. D’Auria said getting the document can be a complicated and difficult process. In this photo, D’Auria has had enough of printing documents from his home printer.

… and the new realities of what office meetings may look like. 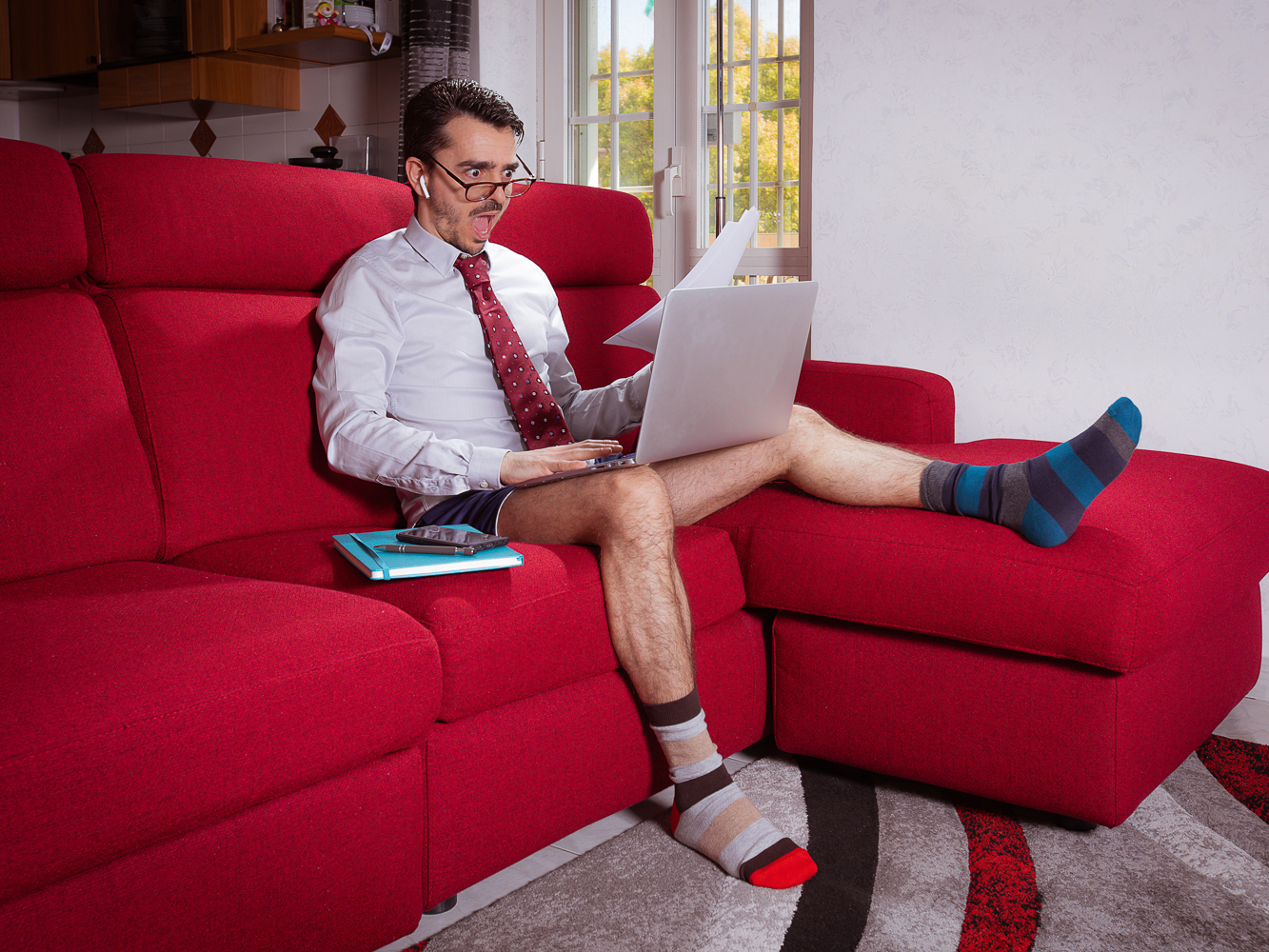 In the photo, D’Auria shows what you may not see on your video screen.

D’Auria said the coronavirus pandemic has made him realise the importance of human interaction. 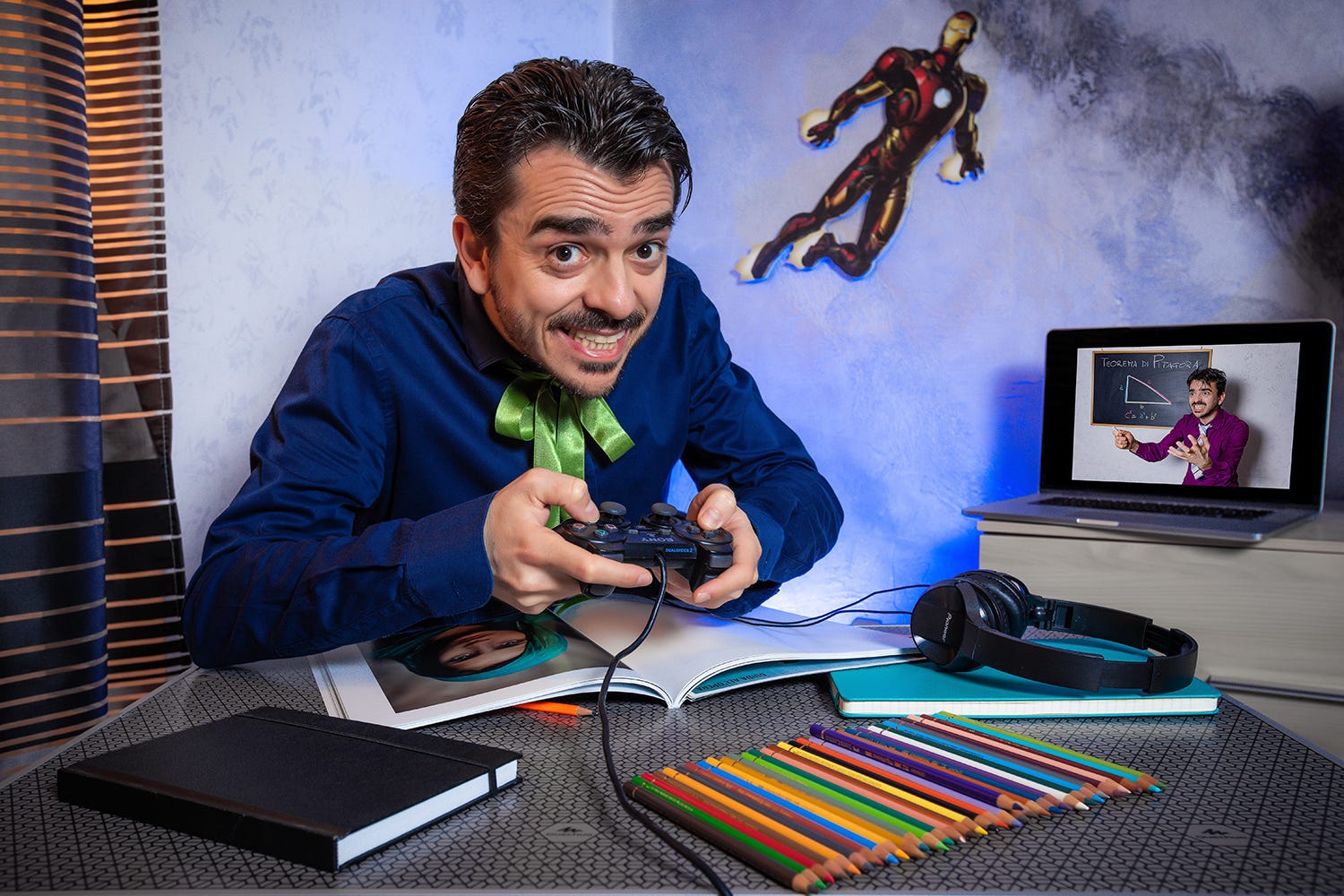 “From the human point of view I feel lost and scared by this unknown and invisible enemy,” he said, adding he’s one of the lucky ones because he’s still healthy. “We are discovering the value of a greeting, a hug. Before this period we used to take them for granted. Now we are looking for them.”

This photo is called “The Student.”

Being left to his own devices has imbued D’Auria with a newfound sense of creativity. 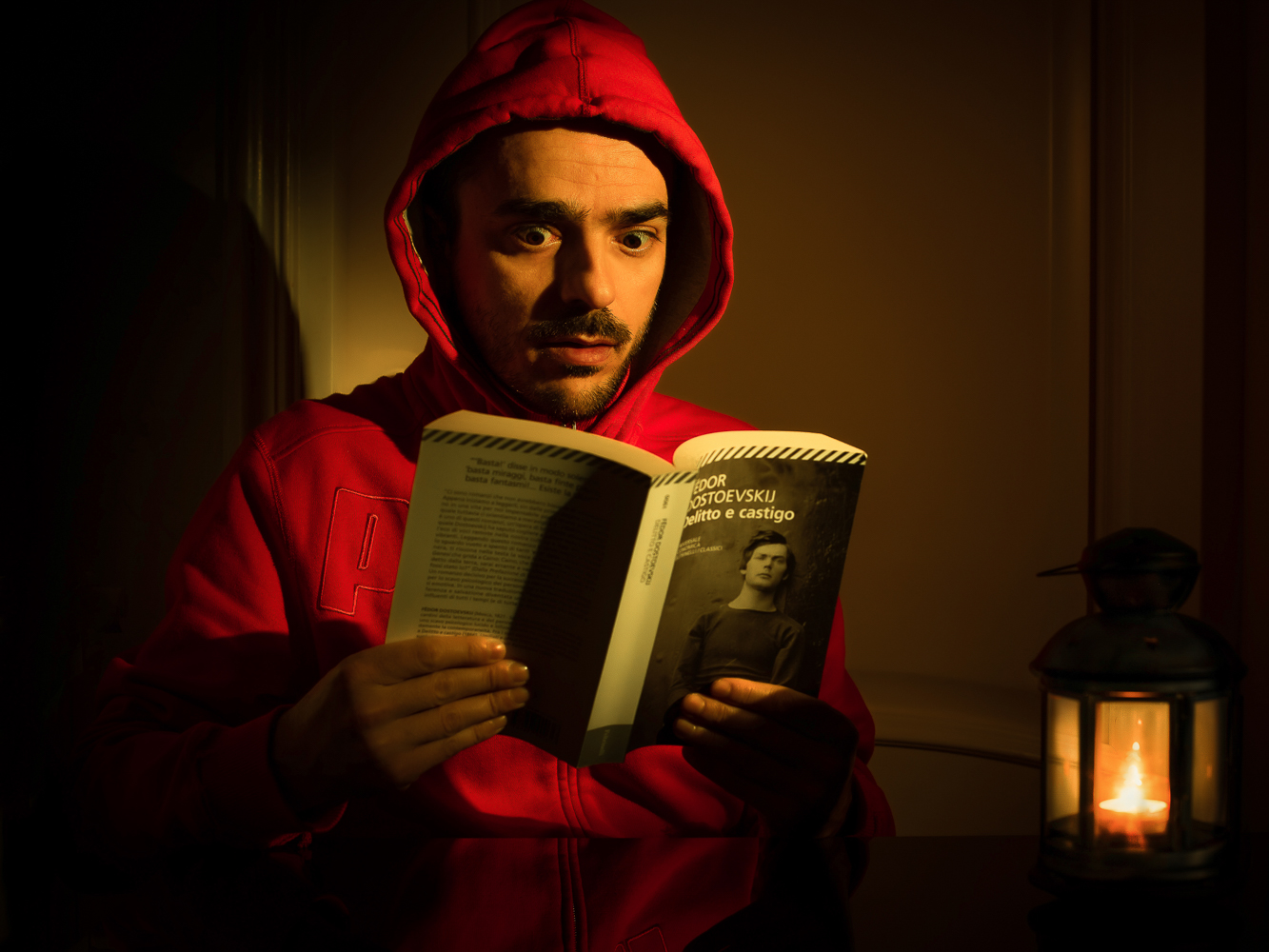 “From the artistic point of view in this period I could do a new thing: self-portraits that I haven’t made before,” D’Auria said. “It has been a stimulus for my creativity.” 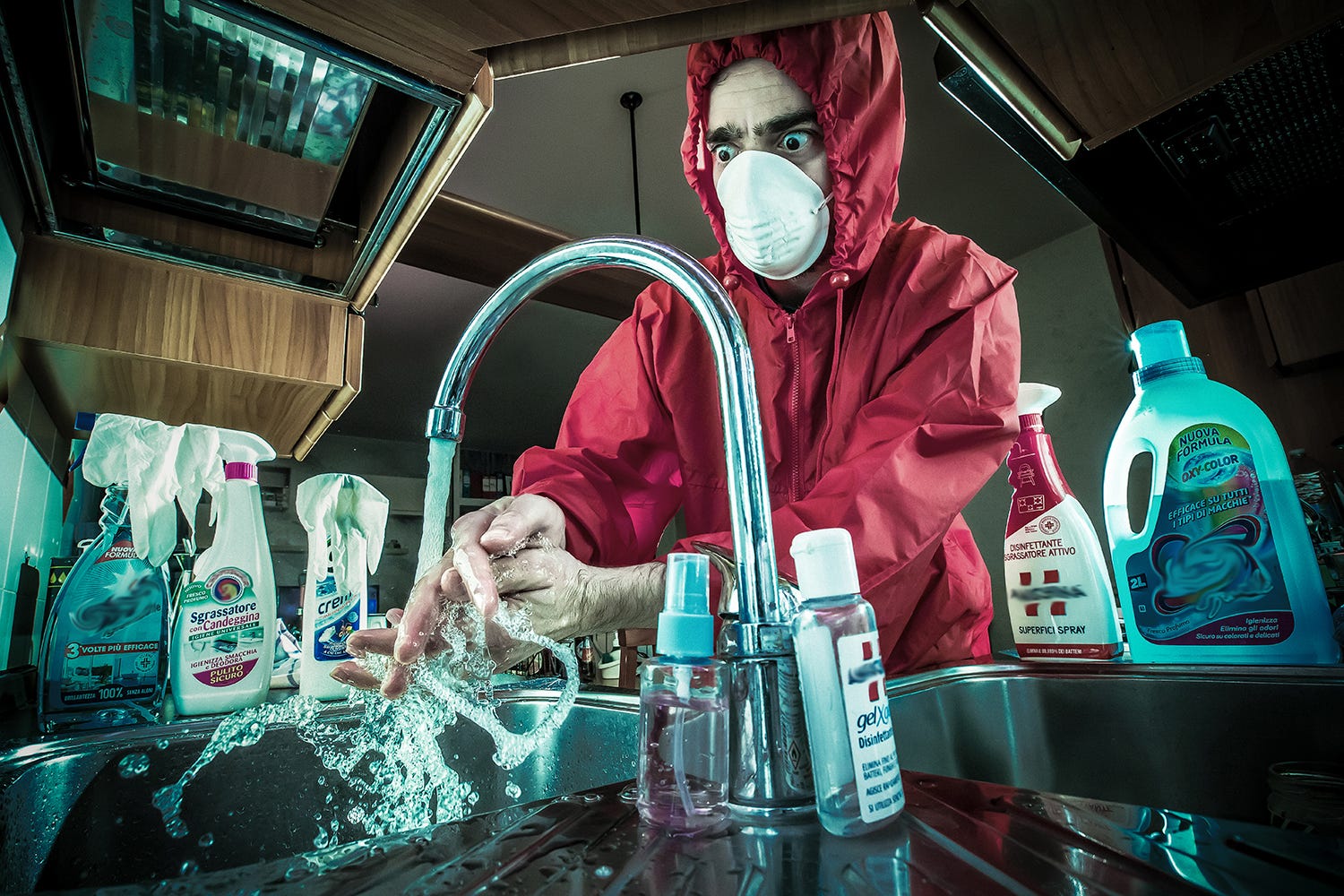 “Mainly I hope to give a smile to the people with my photos and they can forget this dramatic situation even for a second,” D’Auria said. “We have to remember that many people are dead and others are still suffering, I don’t want to disrespect [anyone]. I just want to give a smile.”

He also hopes his series reminds people of the importance of staying at home during the coronavirus pandemic.

“Remember that our grandparents went off to war,” he said of our duty to stay home. “We must be at home on the sofa.”

Like many, D’Auria is uncertain what the future holds in a post-coronavirus world, but he’s optimistic. 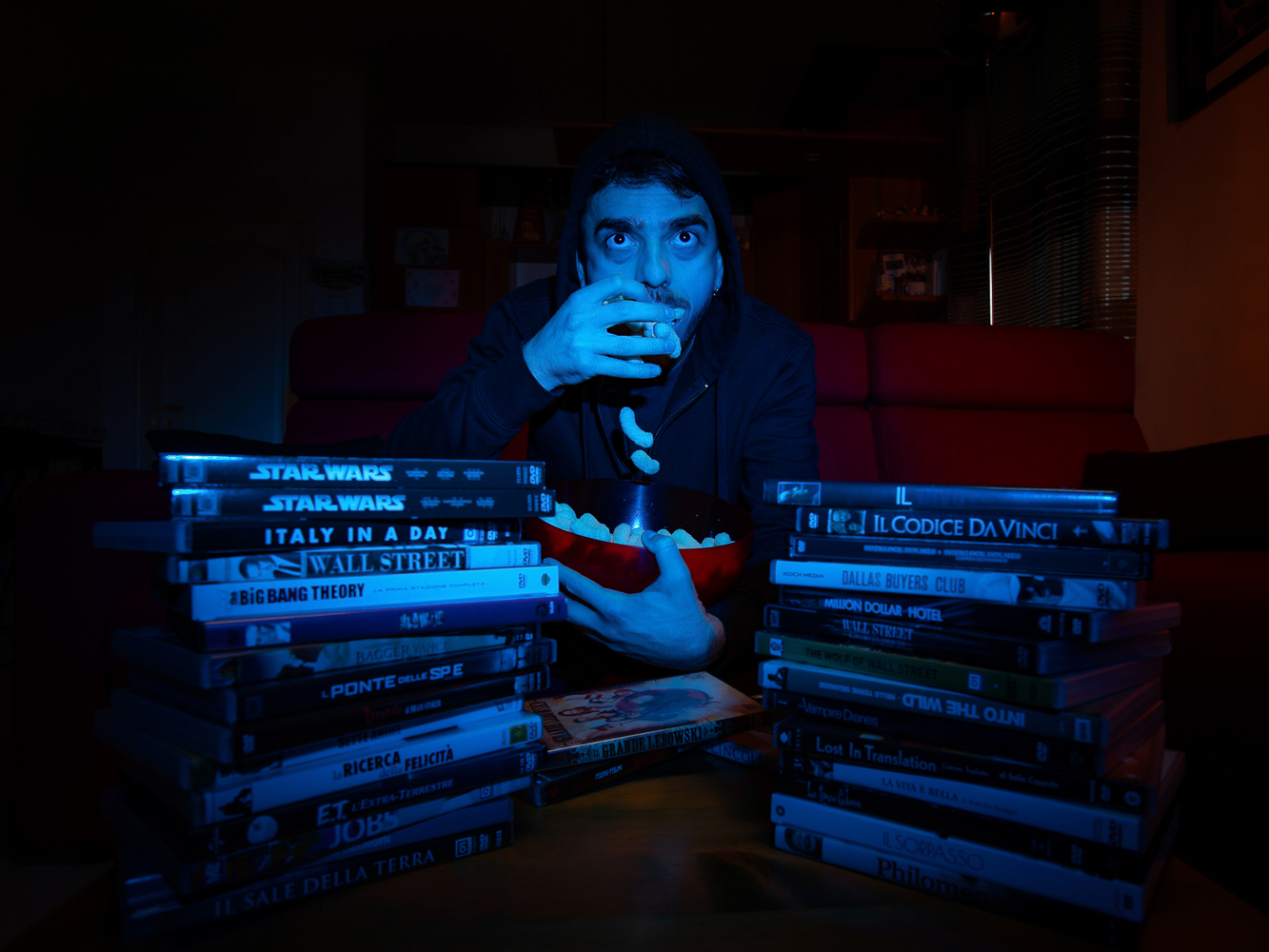 “We have to be positive and confident and we have to believe that day by day we will be able to do everything we did before,” D’Auria said.