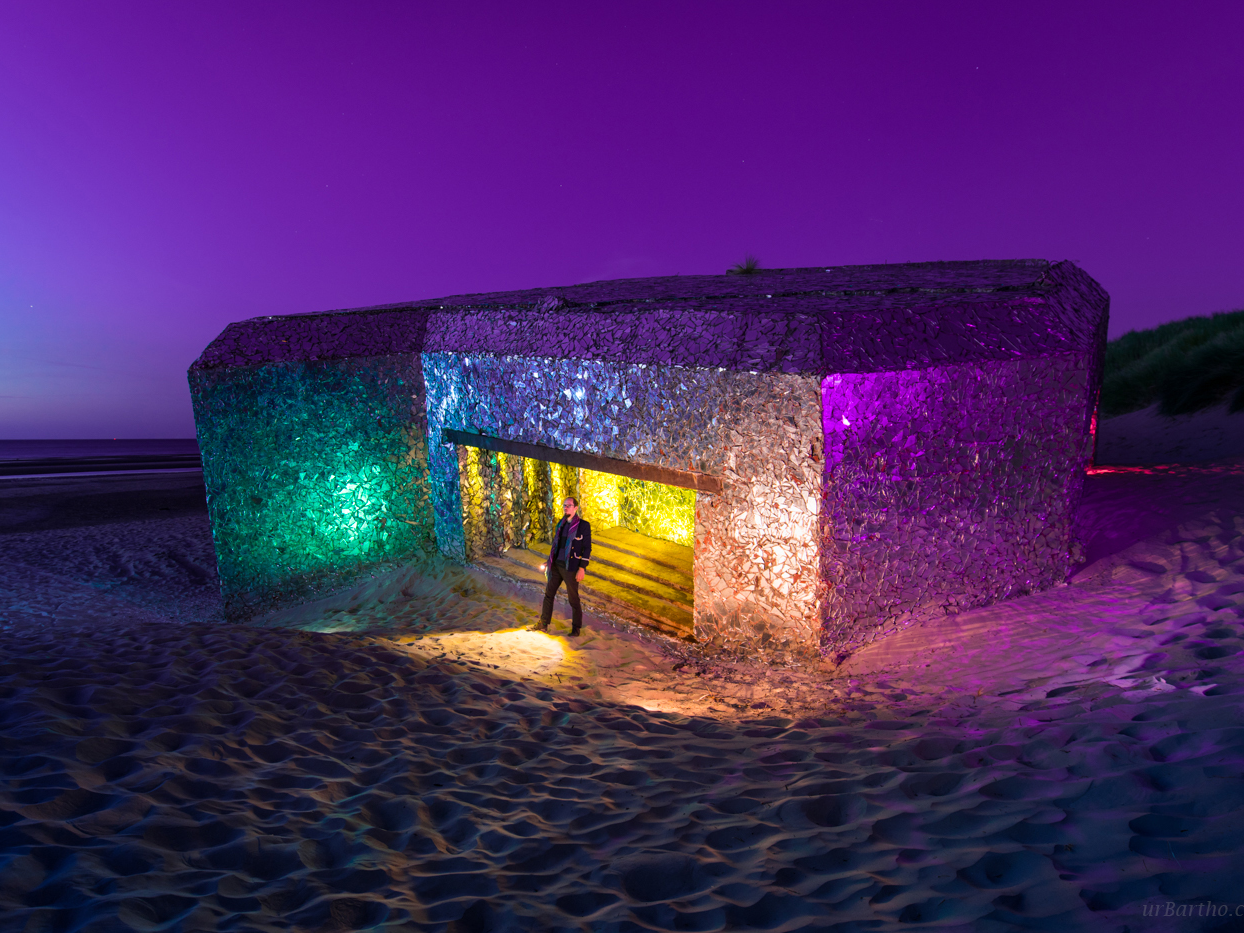 Under the cover of night, French photographer Guillaume Prugniel will visit abandoned and vacant places. Using colourful lights and a little help from friends, Prugniel brings life and colour back into buildings that have fallen into rot and decay.

Insider spoke to Prugniel about the process of finding and photographing the buildings, and what he hopes people see in his images.

Guillaume Prugniel is a French photographer based in Berlin, Germany. Prugniel, pictured left, started taking photos around six or seven years ago, snapping images of everything from weddings to concerts to moments of life. But his passion quickly became capturing abandoned places.

In 2019, he started taking photos of abandoned places at night, like this shipwreck under the moon. 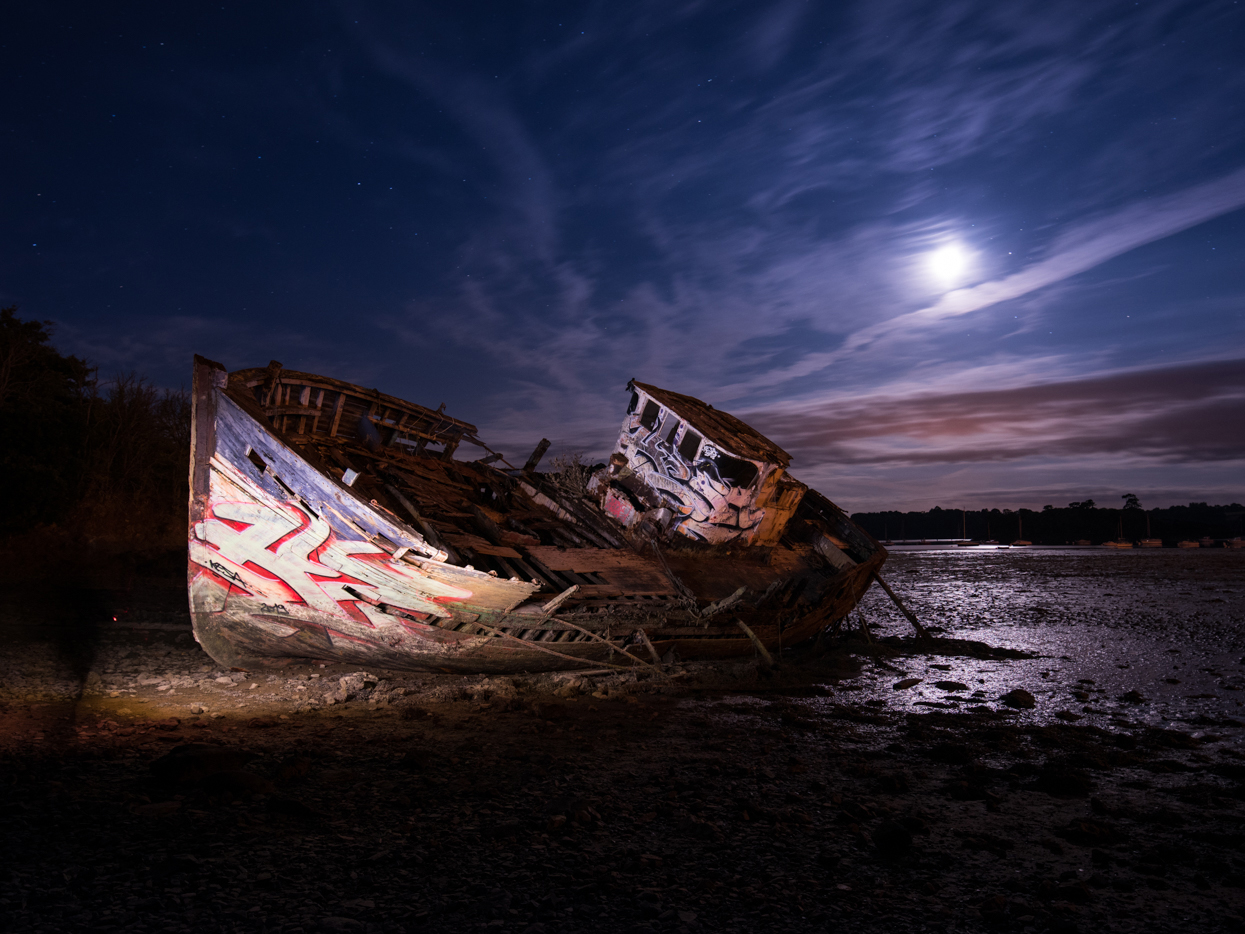 “Last year I started this new series [Enlight the Void] where I mainly go in the night,” Prugniel told Insider. “This really allows me to capture something that is a bit different. I have a lot more freedom with the light, and I can do something that has not been done before.”

The first place Prugniel tried his night photography was at a set of abandoned greenhouse domes. 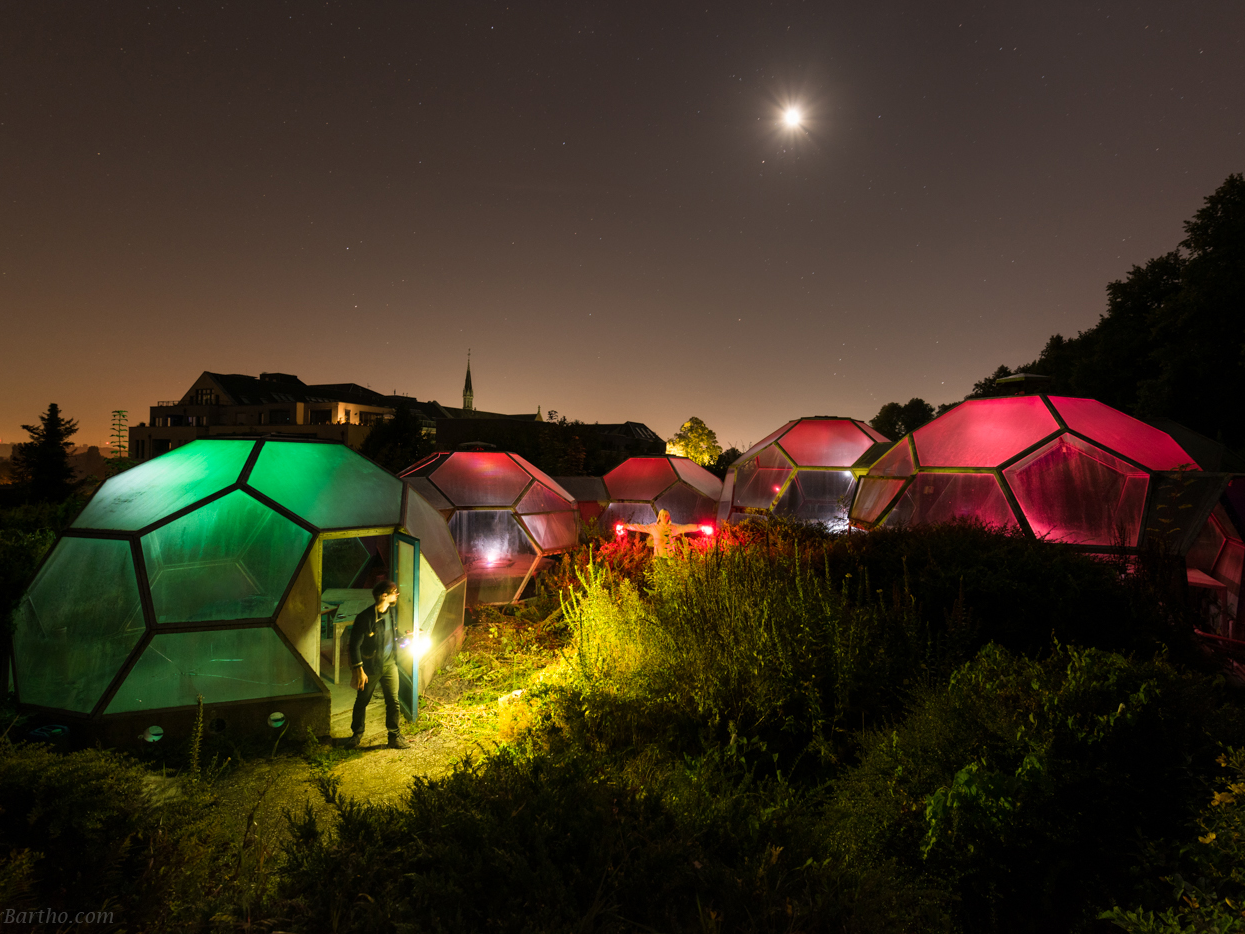 “That was one of my favourites for several reasons,” Prugniel said. “I’ve never seen before a dome greenhouse like that. The process was fun. We had to enter late at night.”

Prugniel and a friend entered around midnight and stayed for hours, getting several photos of the illuminated domes.

Prugniel will often research abandoned places like this nuclear bunker before visiting so he knows what to expect. “I do quite a bit of research on the internet,” he said. “Sometimes I kind of know what to expect. I decide this place might be quite interesting. Sometimes I spot a place where I have no idea what I might find. I just go to check what’s there.”

He said he prefers to work at night because there’s no one else there to interfere with his photos. 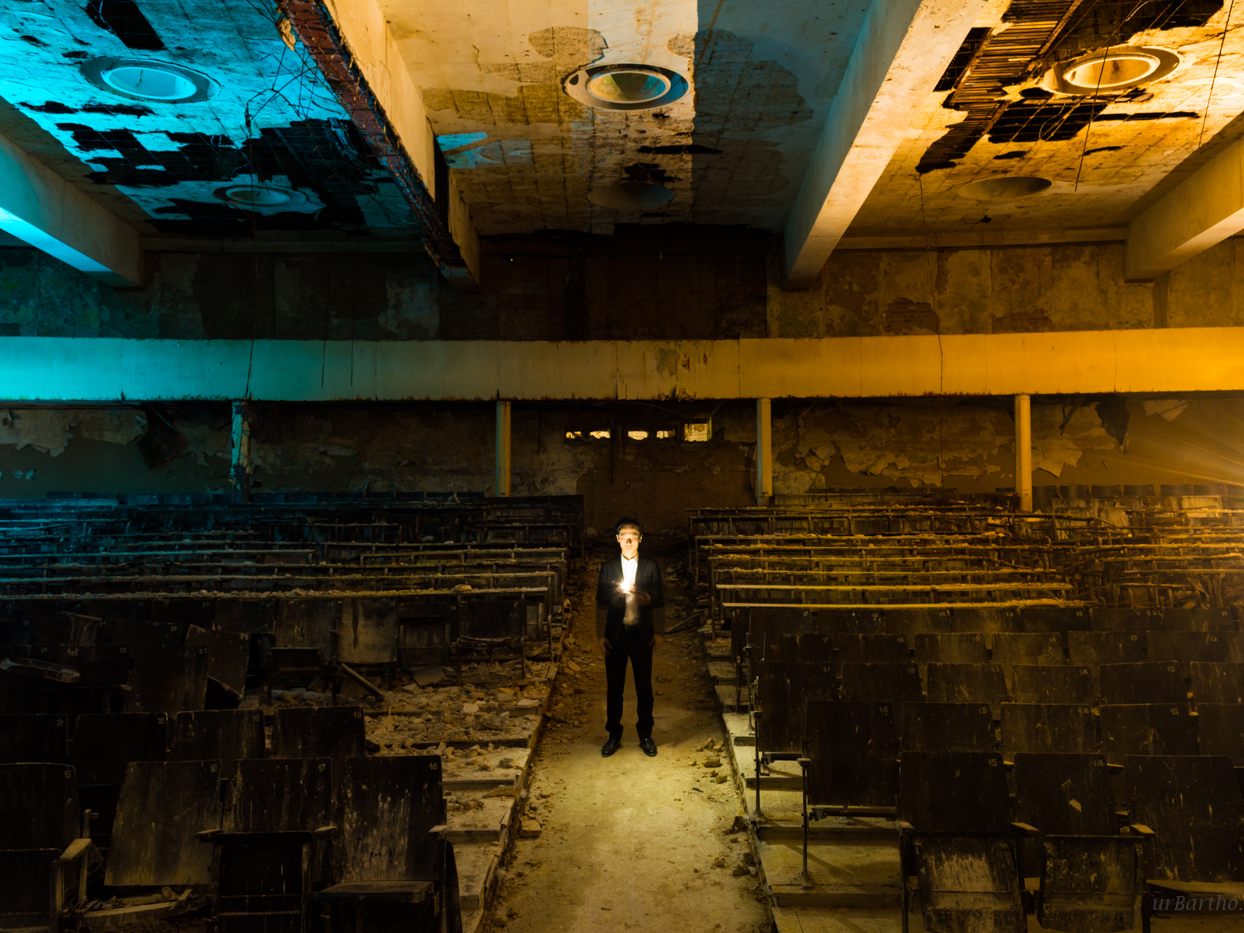 Setting up for the photo usually takes Prugniel around an hour.

“You have less people at night in such places. Sometimes in the day, you might have other people exploring,” Prugniel said. “Sometimes people can get a bit pushy because they want you to let them do their photos of the place.”

“I enjoy being by myself because I have less pressure,” Prugniel said. 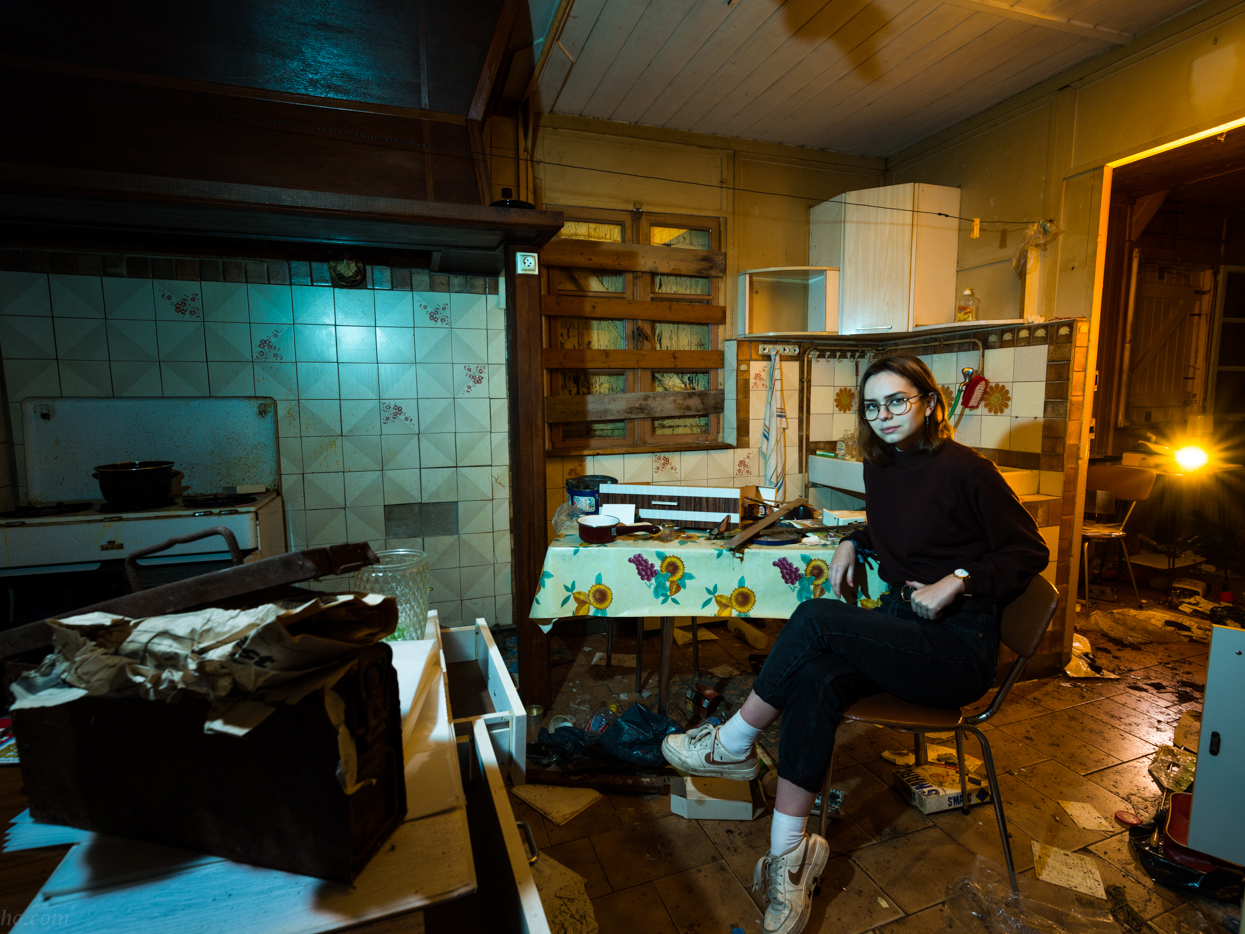 But sometimes he also brings friends to help him set up lights and equipment and even act as models in scenes.

When he arrives on location, Prugniel will look for an interesting point of view to take his shot. 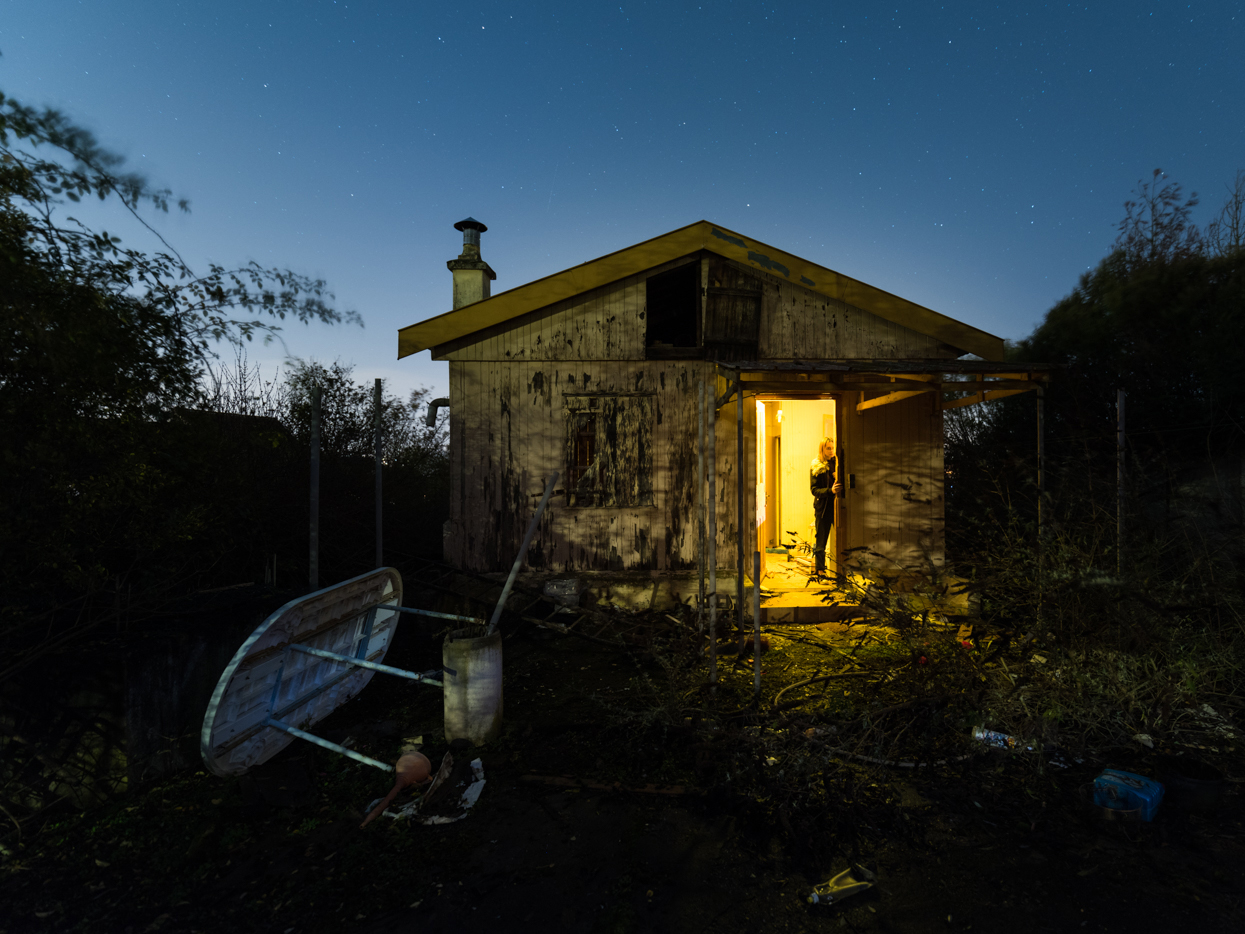 For Prugniel, the frame captures the entire story he’s trying to tell. When exploring abandoned places like this house, he will look for interesting shapes or patterns.

Once he’s decided on his frame, “I start to think about the lights and the colours,” Prugniel said. 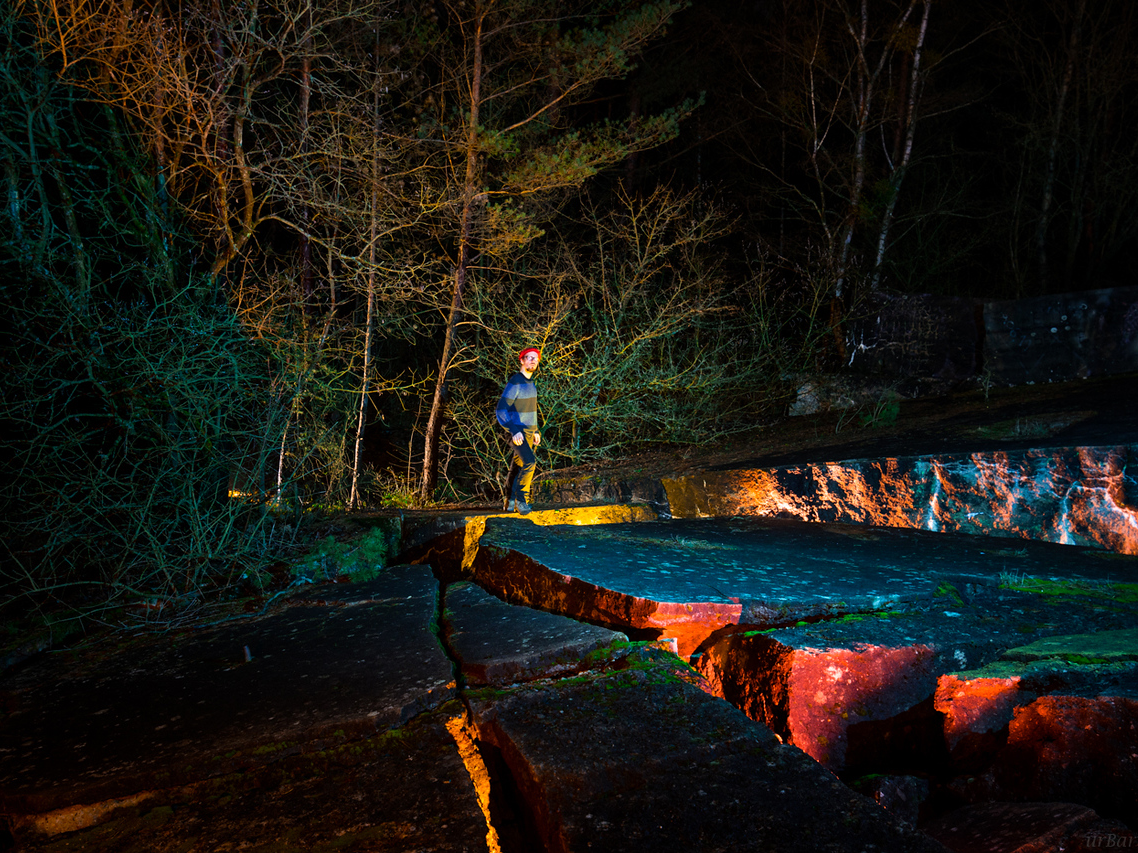 After establishing his frame, he uses an assortment of different coloured lights like the ones highlighting this foundation.

“Sometimes I have an idea about what kind of colour I would like to use, but first I have to think of the frame, and then one light after another, I can build some atmosphere.”

The lights help to create dramatic effects and showcase long-forgotten buildings like this bunker. 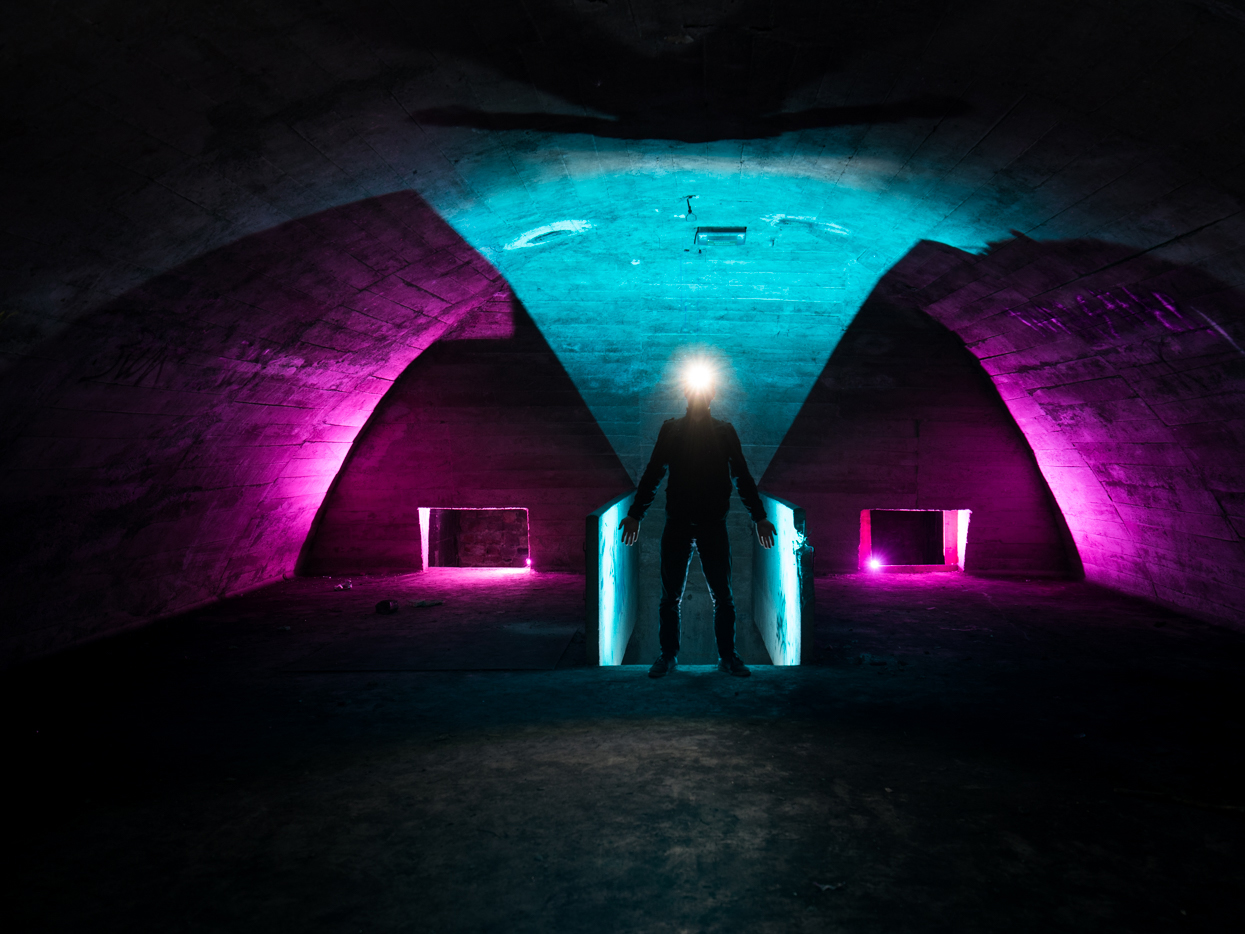 Prugniel said he uses the lights to create a story.

“It can sometimes be a bit intimidating when the place is really big,” Prugniel said. 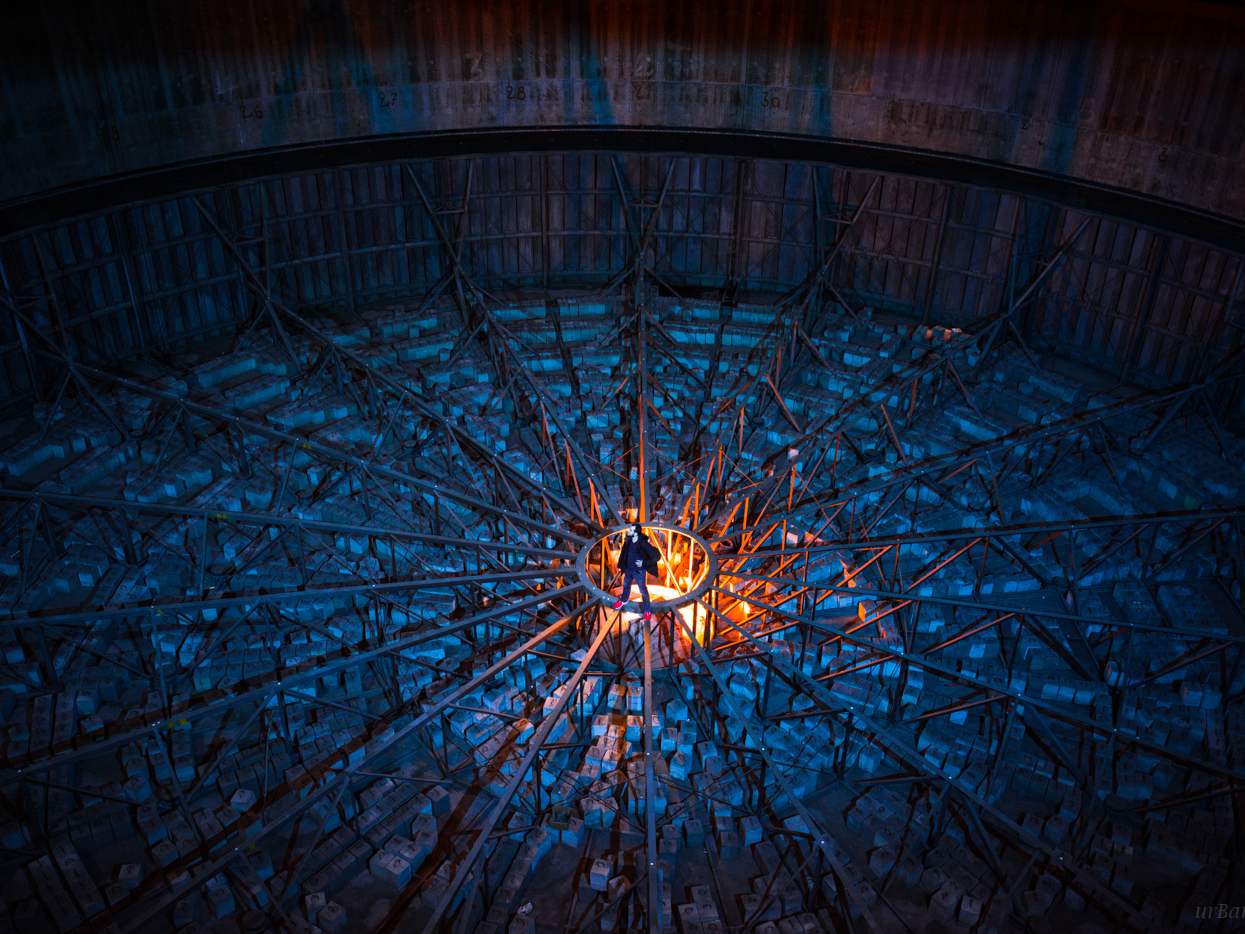 “Last weekend I was in a huge abandoned fuel tank from the Cold War, and I have to say it was quite impressive because you have a lot of echo and every step you do is resonating so much. You need to get used to the place.”

“You have to be quite cautious and watch your step, look around so you don’t have anything hanging that might hurt yourself,” he said. 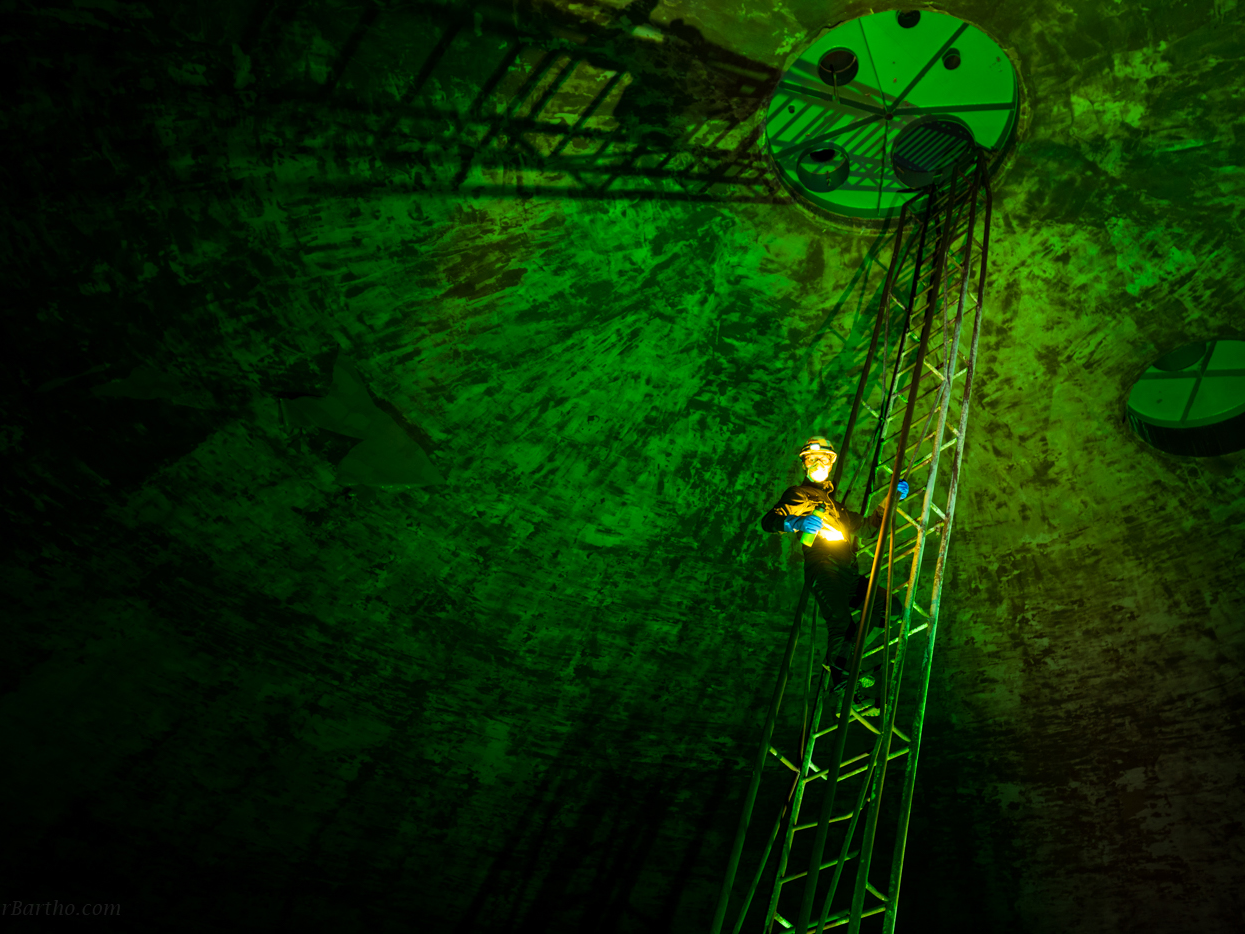 When it comes to exploring abandoned places, Prugniel recommends vigilance and caution.

“You have to watch your steps and if you decide to climb on something you have to be sure it’s going to support the weight of your body. You have to really advance carefully,” Prugniel said. “When you’re in very old buildings, the floor may not be solid. You might fall from a few meters if you step on the wrong place.”

But other times, it can be rather relaxing, especially in the countryside. 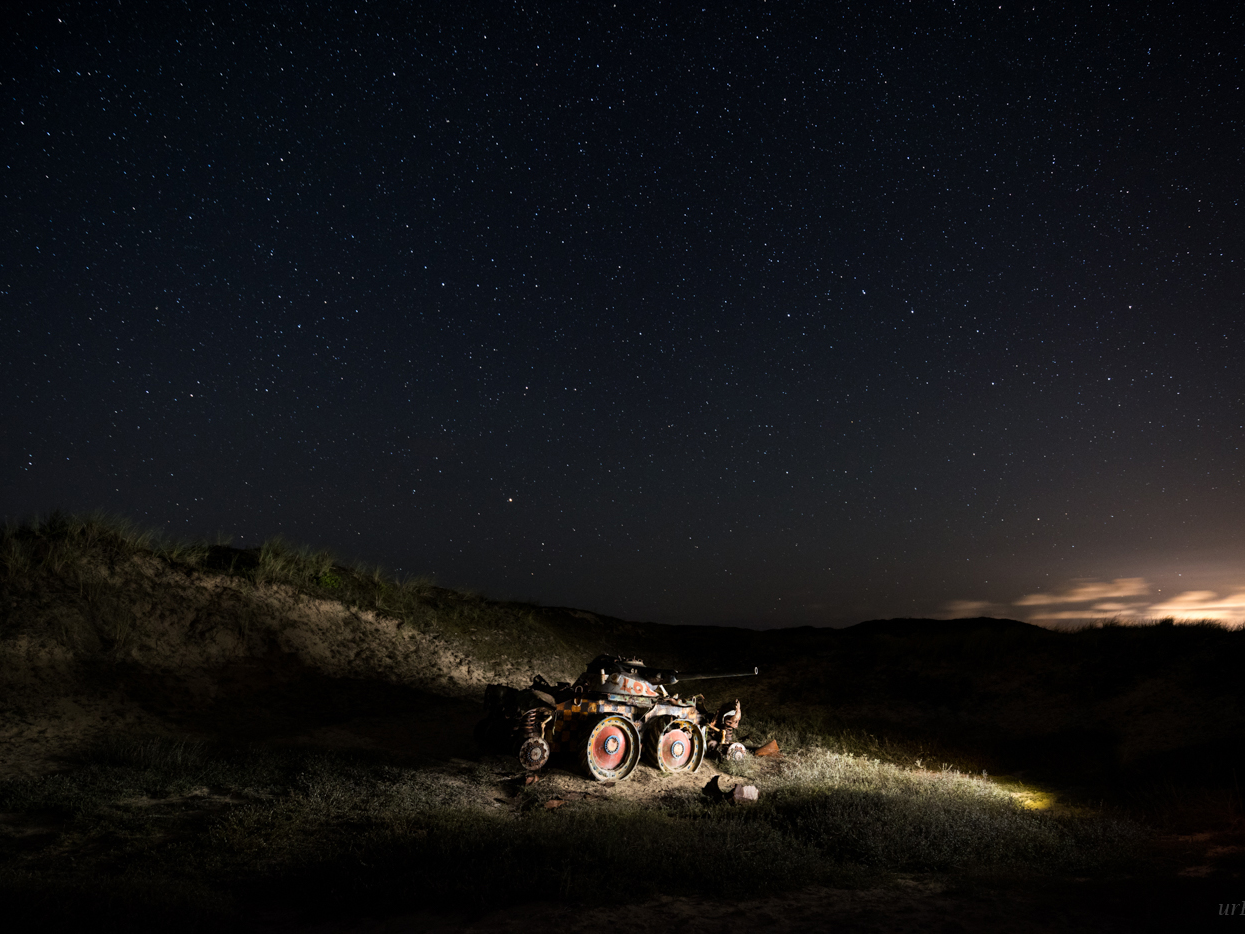 “Sometimes it’s quiet and relaxing to be alone because it’s really calm. Nothing is moving, especially if you are far away out of the city,” Prugniel said. “I feel a bit out of the world and on top of the clouds. It feels special. It’s a particular moment that I like to have by myself.”

Prugniel will often travel to abandoned places in Europe, particularly Germany and France, to capture his photos. 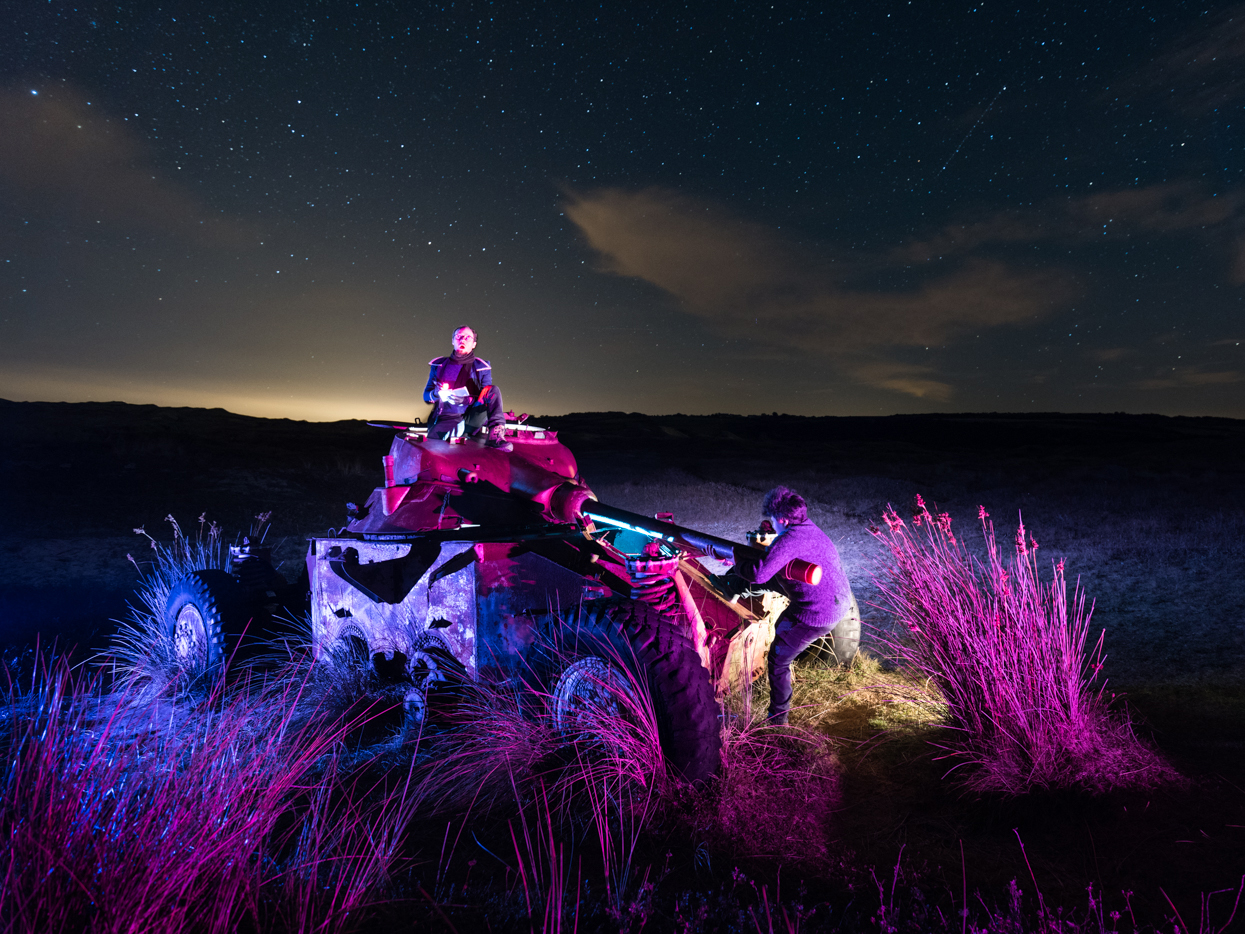 Prugniel had planned to travel to Italy in a few weeks to take photos of abandoned buildings, but the spread of the coronavirus has put those plans in jeopardy for now. 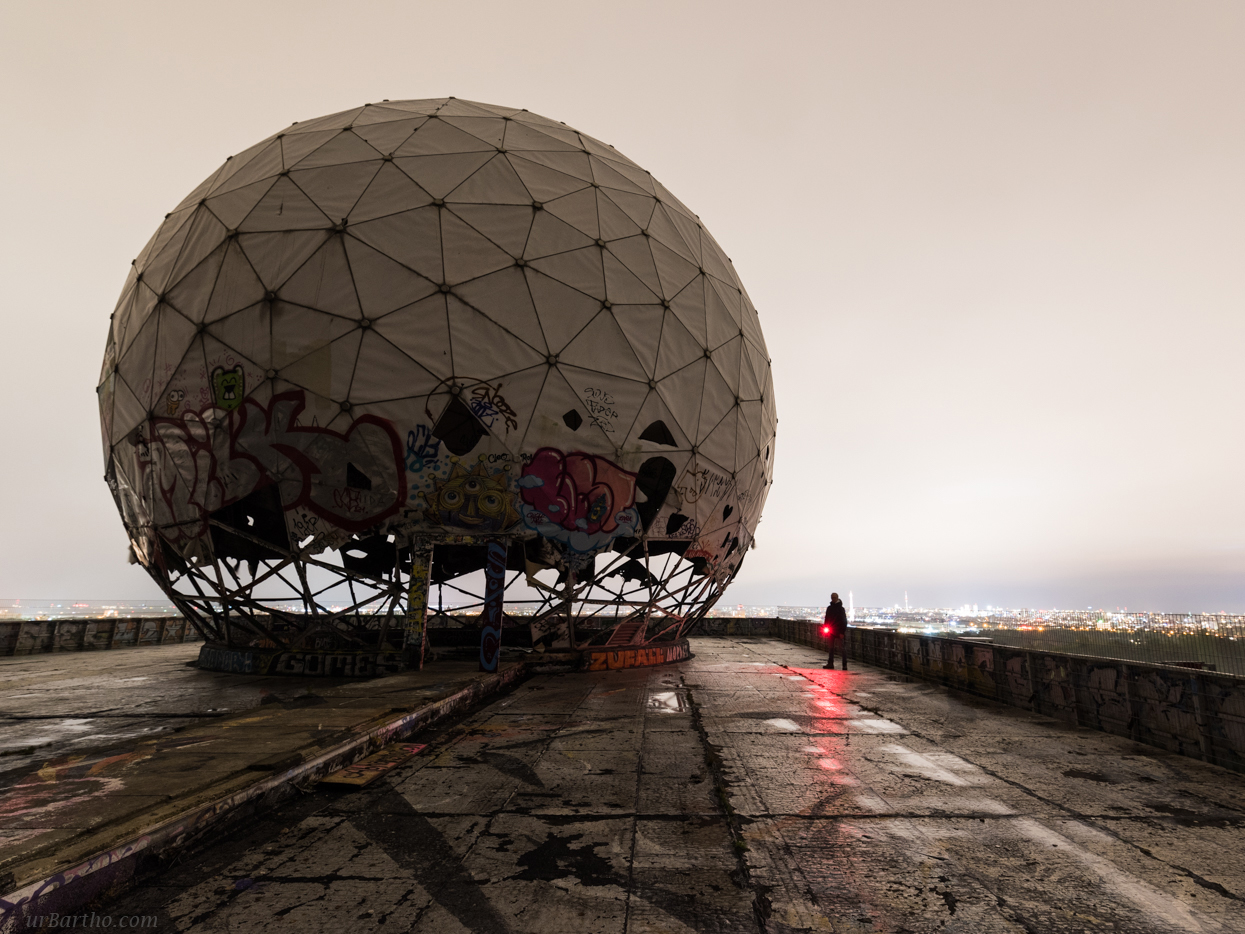 Prugniel posts a new photo of an abandoned location about once a week to his Instagram page, and he plans to continue his series for the foreseeable future.

Prugniel wants viewers to form their own messages and meaning from his work. 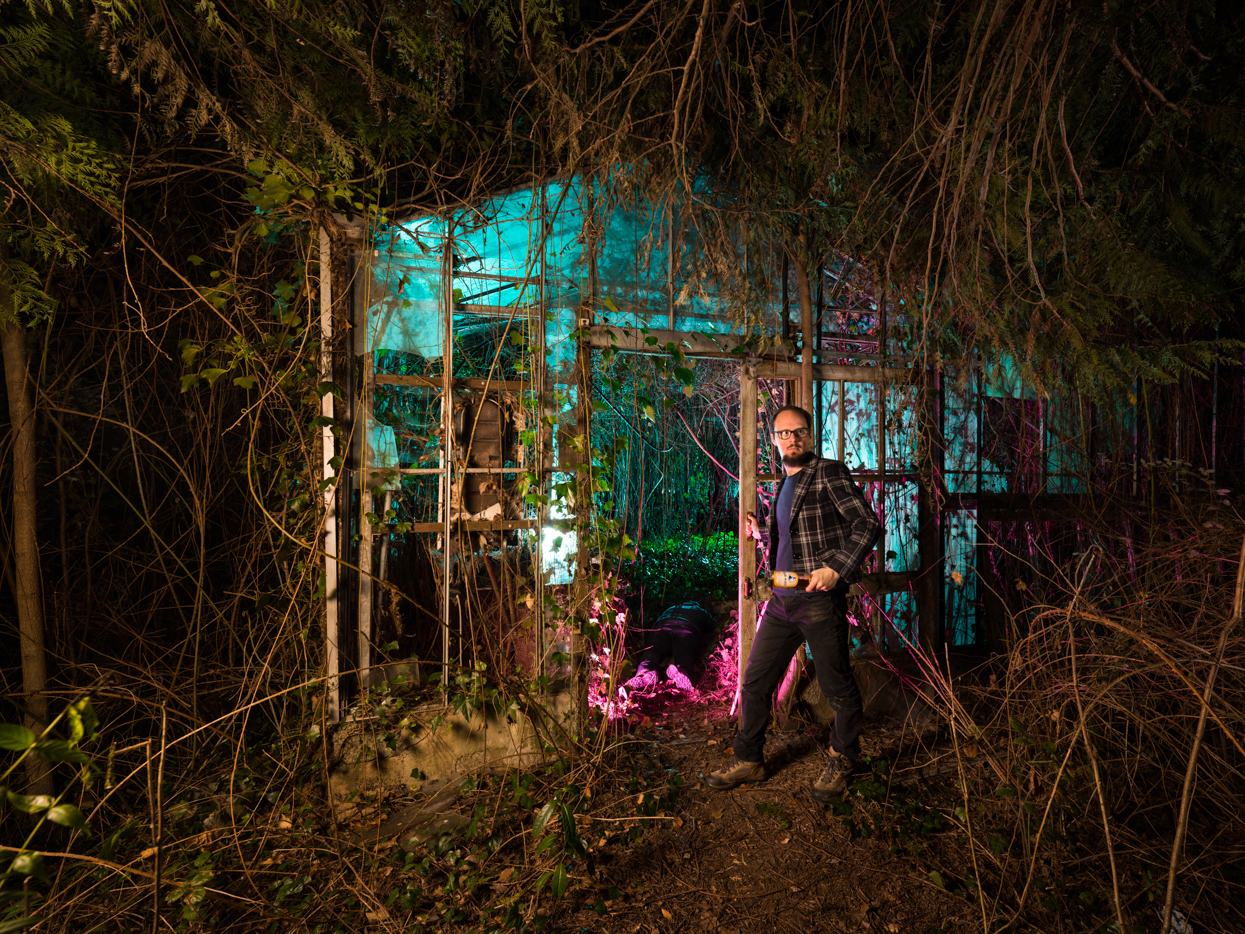 “I like to be able to express something. It’s about telling a story. I like to think a bit about the story and the character somewhere on the frame,” Prugniel said.

Ultimately, he wants the viewer to decide their own interpretation of his work based on their own life experiences.