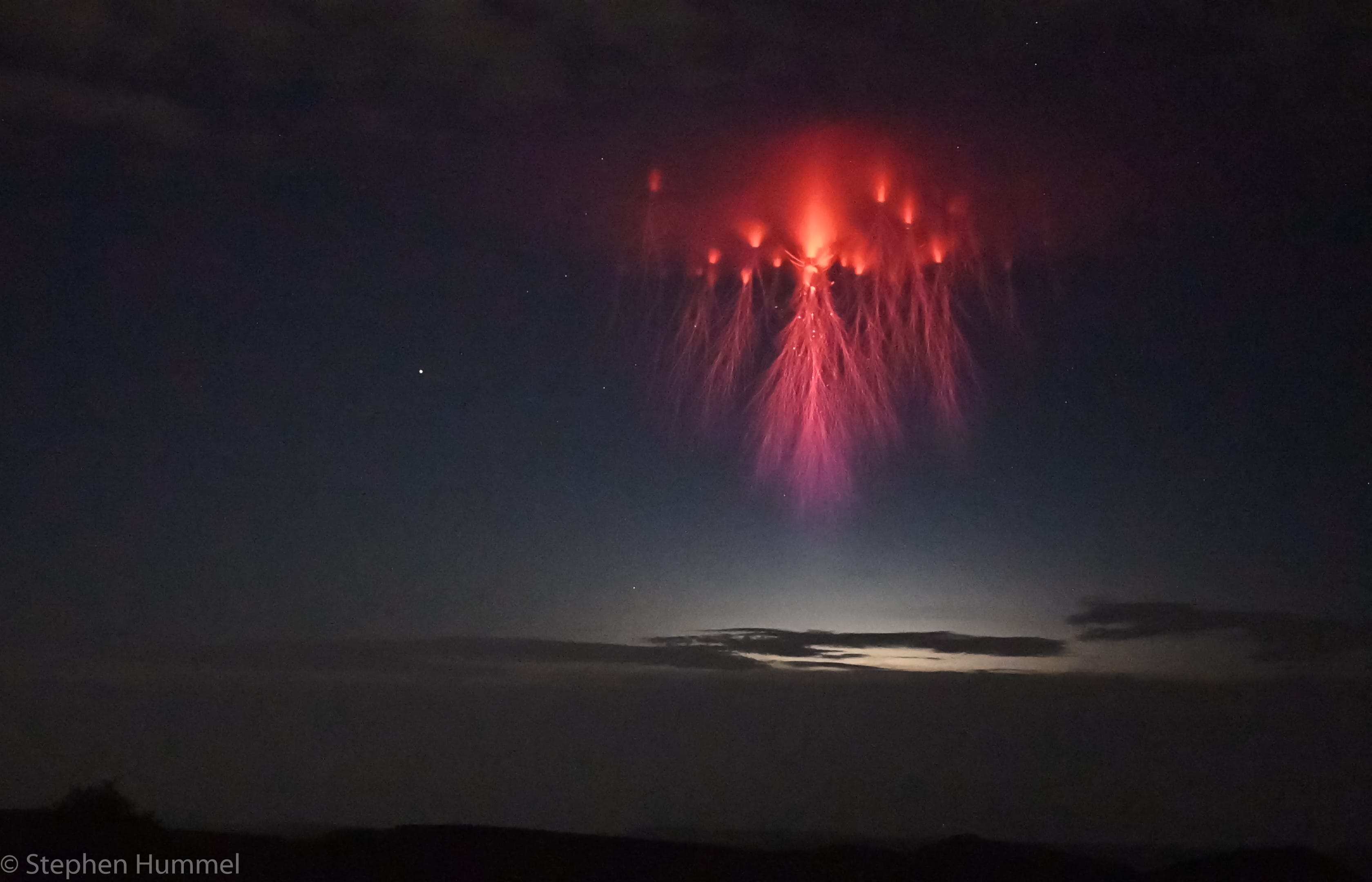 If you’ve ever looked up during a thunderstorm and glimpsed a red jellyfish sitting high in the sky, you weren’t hallucinating.

These tentacle-like spurts of red lightning are called sprites. They’re ultrafast bursts of electricity that crackle through the upper regions of the atmosphere – between 37 and 50 miles up in the sky – and move towards space, according to the European Space Agency.

The phenomenon is a rare sighting: It lasts just tenths of a second and can be hard to see from the ground since it’s generally obscured by storm clouds. But Stephen Hummel, a dark-skies specialist at the McDonald Observatory, captured a spectacular image of one of these sprites on July 2 (shown above) from a ridge on Mount Locke in Texas.

“Sprites usually appear to the eye as very brief, dim, grey structures. You need to be looking for them to spot them, and oftentimes I am not certain I actually saw one until I check the camera footage to confirm,” Hummel told Business Insider.

On the night he snapped this photo, he’d recorded 4 1/2 hours of footage before capturing the sprite on film.

“Overall I’ve probably recorded close to 70 hours’ worth of footage and stills this year, and caught about 70 sprites,” he said, adding that half of those were in a single storm.

Jellyfish sprites can be seen glimpsed from space

Davis Sentman, a professor of physics at the University of Alaska who died in 2011, proposed the name “sprite” for this type of weather phenomenon. He said the name was “well suited to describe their appearance,” since the word evokes the lightning’s fairy-like, fleeting nature.

Some sprites, like the one Hummel photographed, are jellyfish-shaped. Others are just vertical columns of red light with tendrils snaking down: these are called carrot sprites.

Jellyfish sprites can be enormous – the one Hummel photographed was “probably around 30 miles long and 30 miles tall,” he said. Some can be seen from more than 300 miles away.

They occur because when lightning strikes the ground, it tends to release positive electrical energy that needs to be balanced out by equal and oppositely charged energy elsewhere in the sky. So sprites are the electrical discharges that balance the equation.

“The more powerful the storm and the more lightning it produces, the more likely it is to produce a sprite,” Hummel said.

While similar to regular lightning, which shoots between electrically charged air, clouds, and the ground, sprites happen much farther from Earth’s surface.

Astronauts sometimes spot them from the International Space Station. 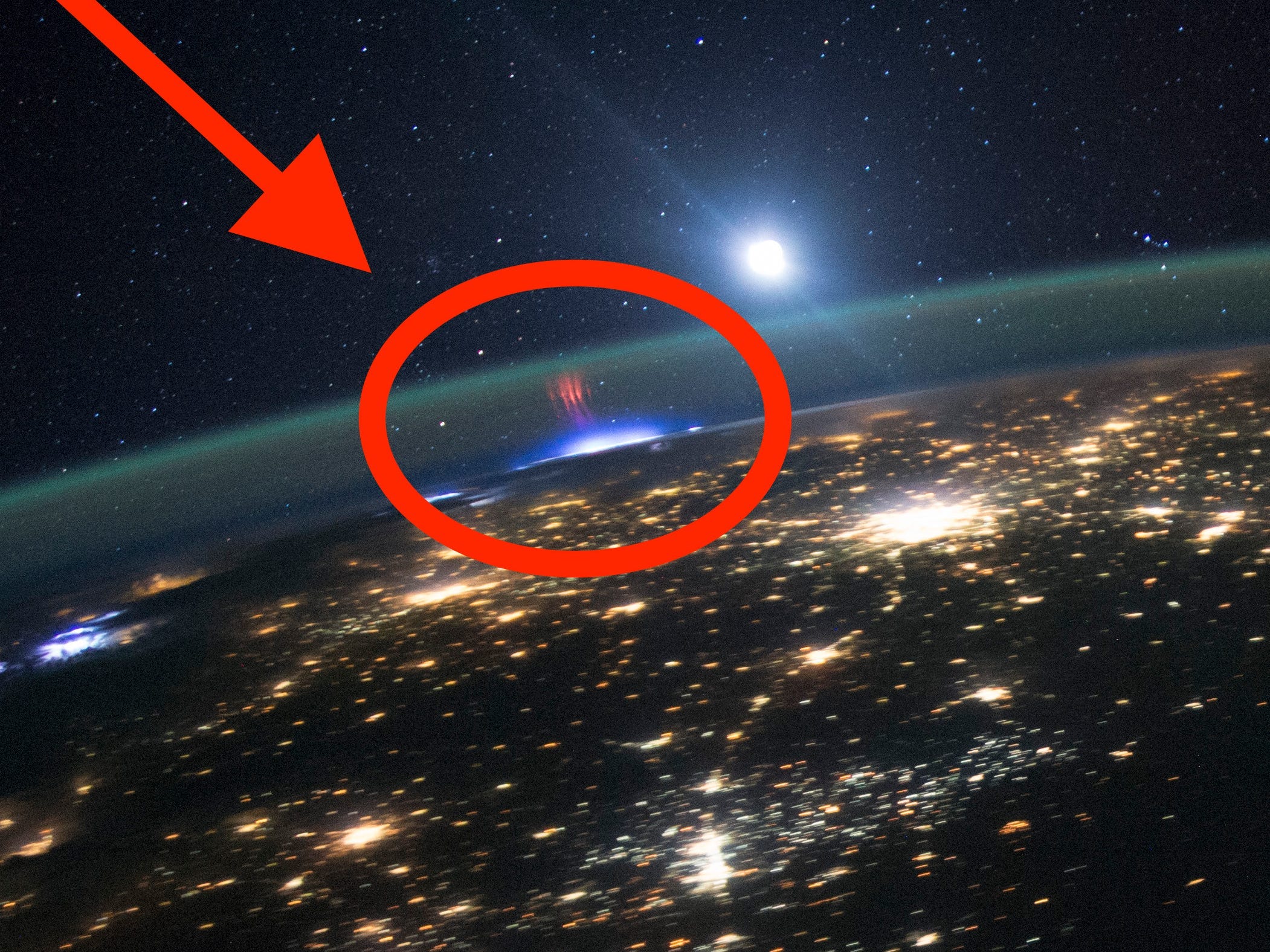 NASAAstronauts glimpse a red lightning sprite below the white light of an active thunderstorm from aboard the International Space Station, August 2015.

As a sprite sparks, it turns red because of nitrogen floating high in Earth’s atmosphere. The gas gets excited by the burst of electricity and emits a red glow.

Multiple column sprites line up above an angel sprite in my last sprite lightning capture from the night of 4/17/2019 . An uncropped image on the 50mm about 20 minutes before being clouded over. Anadarko, Oklahoma. #okwx #APOD @JimCantore @emilyrsutton @MichaelSeger pic.twitter.com/gXNlPMKucZ

Since the sprites’ discovery in 1989, scientists have spotted them over every continent except Antarctica.